It's pretty common for my wife and I to use each other as sounding boards for pretty much everything. This week's game was no exception. I wanted to test out a complicated scenario idea, as well as a new Martian unit - Sniper Drones. While the scenario needs a bit of work, I feel like I got a pretty good idea how those Sniper Drones work in combat - they're just terrible, awful, horrible things. At least if you're playing the humans. My wife, as we'll see below, has a very different perspective on them. And yes, she's back to playing the Martians.

The scenario was interesting, but I'm going to try it again with some changes later in the week and see if I can make it play a bit more how I was hoping it would. Here's the first draft, so to speak.

Background: General Pershing and staff are very worried about the recent setbacks in the Mississippi Delta Region. If the area is lost, it is only a matter of time before everything south of Memphis is lost, straight down to New Orleans. He's ordered General Morton and the 29th to engage the enemy and push them back wherever they are found. Scouts are sent into the swampy terrain and farmland north of Vicksburg, trying to get a clearer idea of the situation. At a bend in the road Southeast of Mayersville, they encounter a single Scout Tripod, their Martian counterpart.  Both sides call in reinforcements, and the battle escalates... and escalates... and escalates... 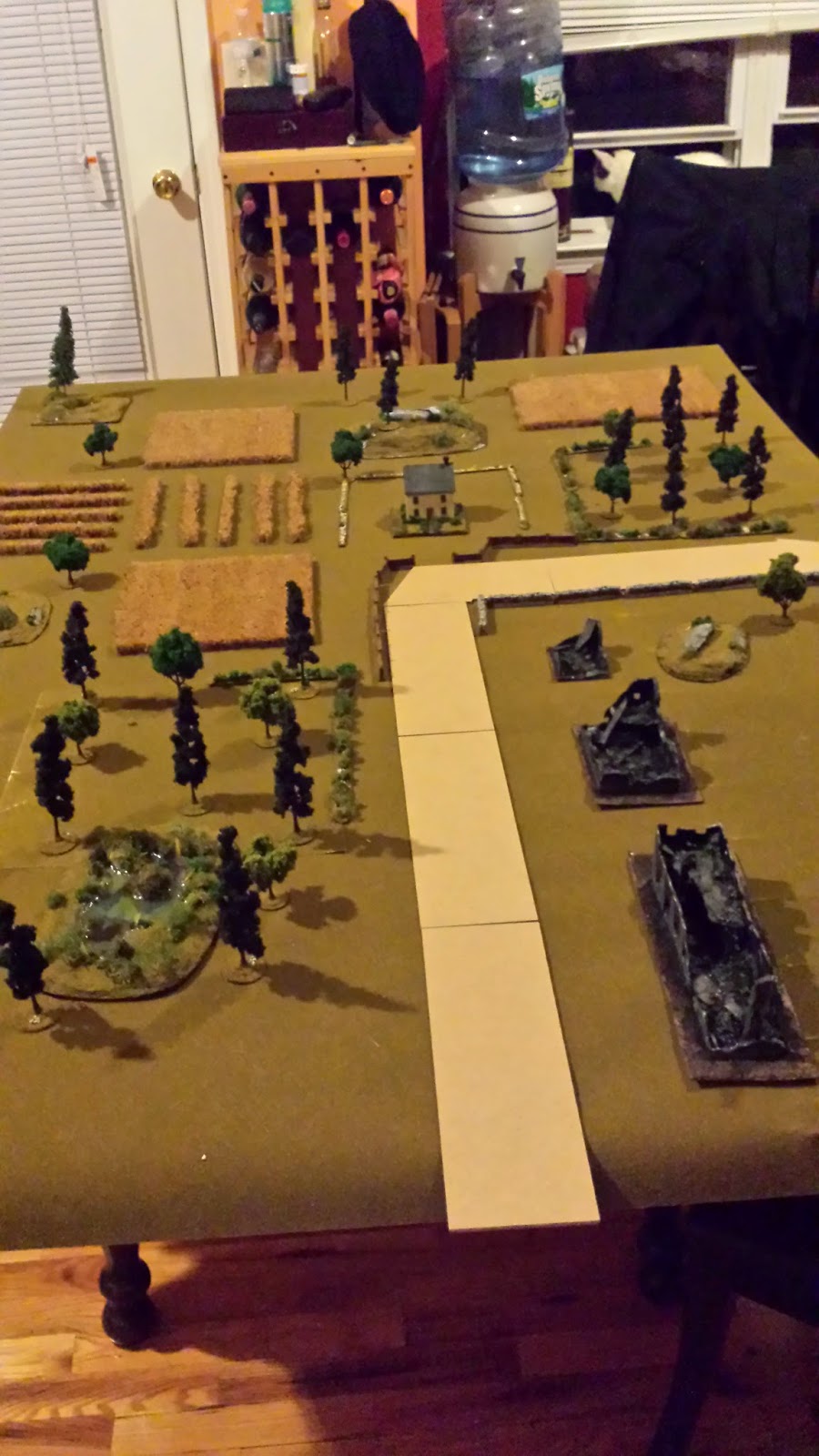 Scenario (Draft): This is a staggered entry battle, where each turn, additional points enter the battle as reserves (although unlike regular reserves, you never need to roll for them, they always come in). The winner of that round's initiative places first, then the opponent, and then the round begins when both are deployed. If all the opponent's deployed forces are destroyed, the game is over.  Similarly, if the army's break-point is reached at any point, the game ends.

Deployment: Sides and deployment order are random. Each side works out the total deployment for the first 5 turns out in advance, writing down which units come in which round on a card, keeping it carefully hidden from the opponent. Each turn, the amount of points deployed escalates as follows:
Round 1: 150pts
Round 2: 300
Round 3: 600
Round 4: 1000
Round 5: 2000 (or whatever is left, which in my case left the humans a bit behind, something that I will correct). 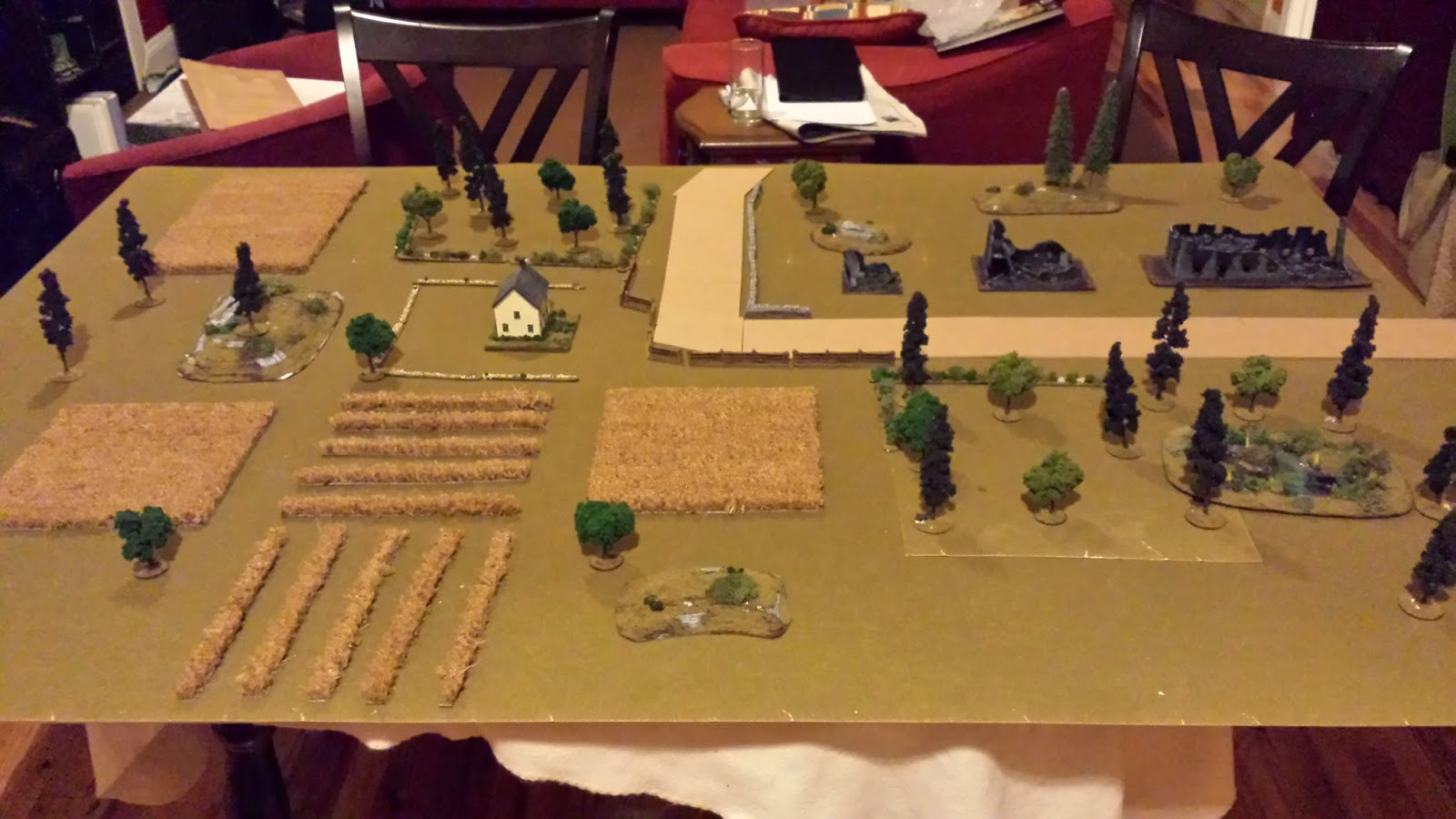 The table is set up by mutual agreement, with a variety of cover in various places, but the strongest cover to the right in the above picture, with a heavy forest, swamp, and some ruins. Speaking of the swamp, check out my new swamp piece. Purdy, no? 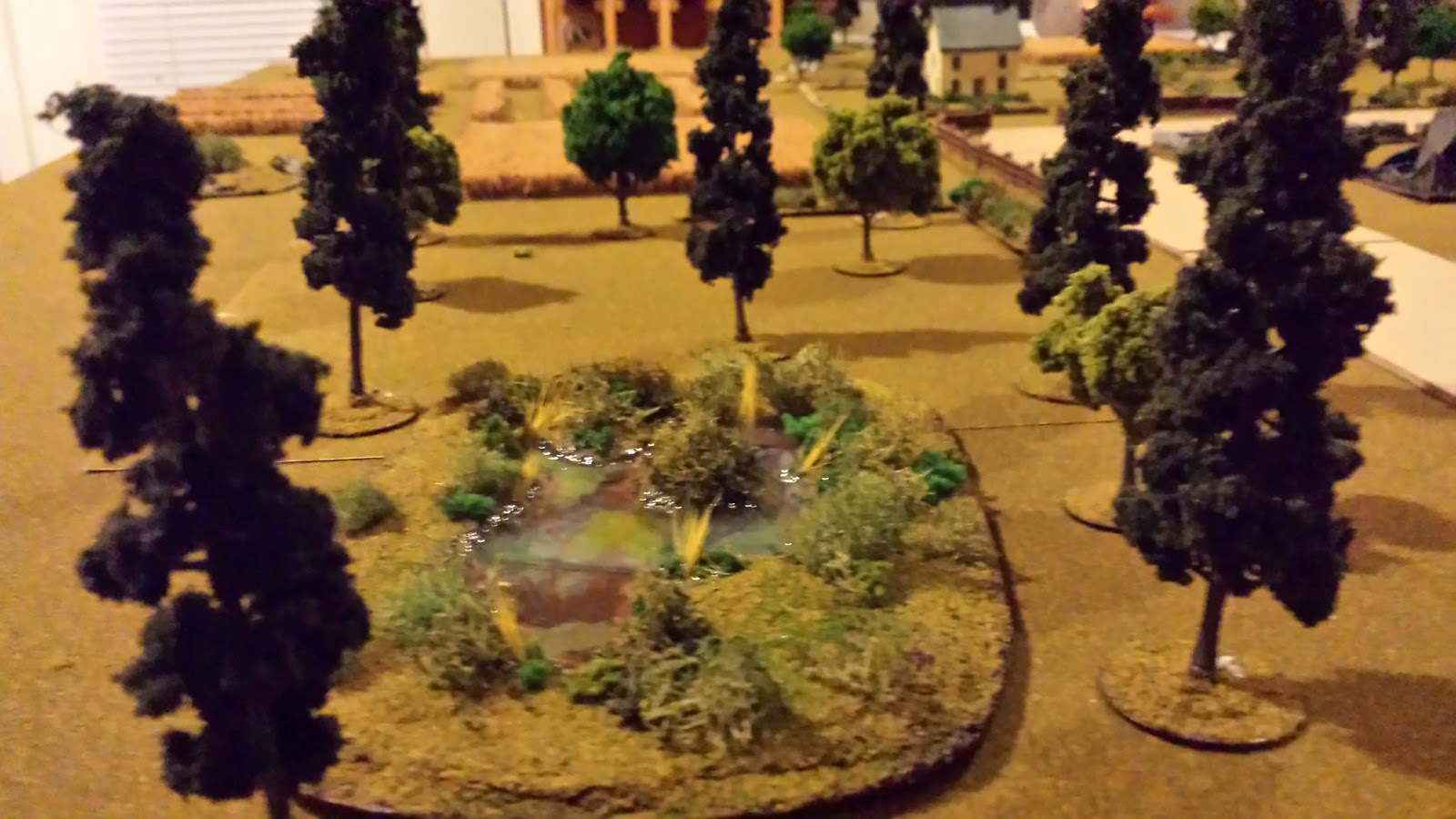 Humans deploy first, and win initiative to boot.  I deploy two units of infantry, a HMG, and a unit of rough riders, well behind some cover. I split my units between the two sides of the board, hoping to take the ruins on my left, as well as the heavy woods to my right.  The Martians deploy only a scout, and move it up, but neither side can shoot that round.  The Martian is visible below only in the distance. 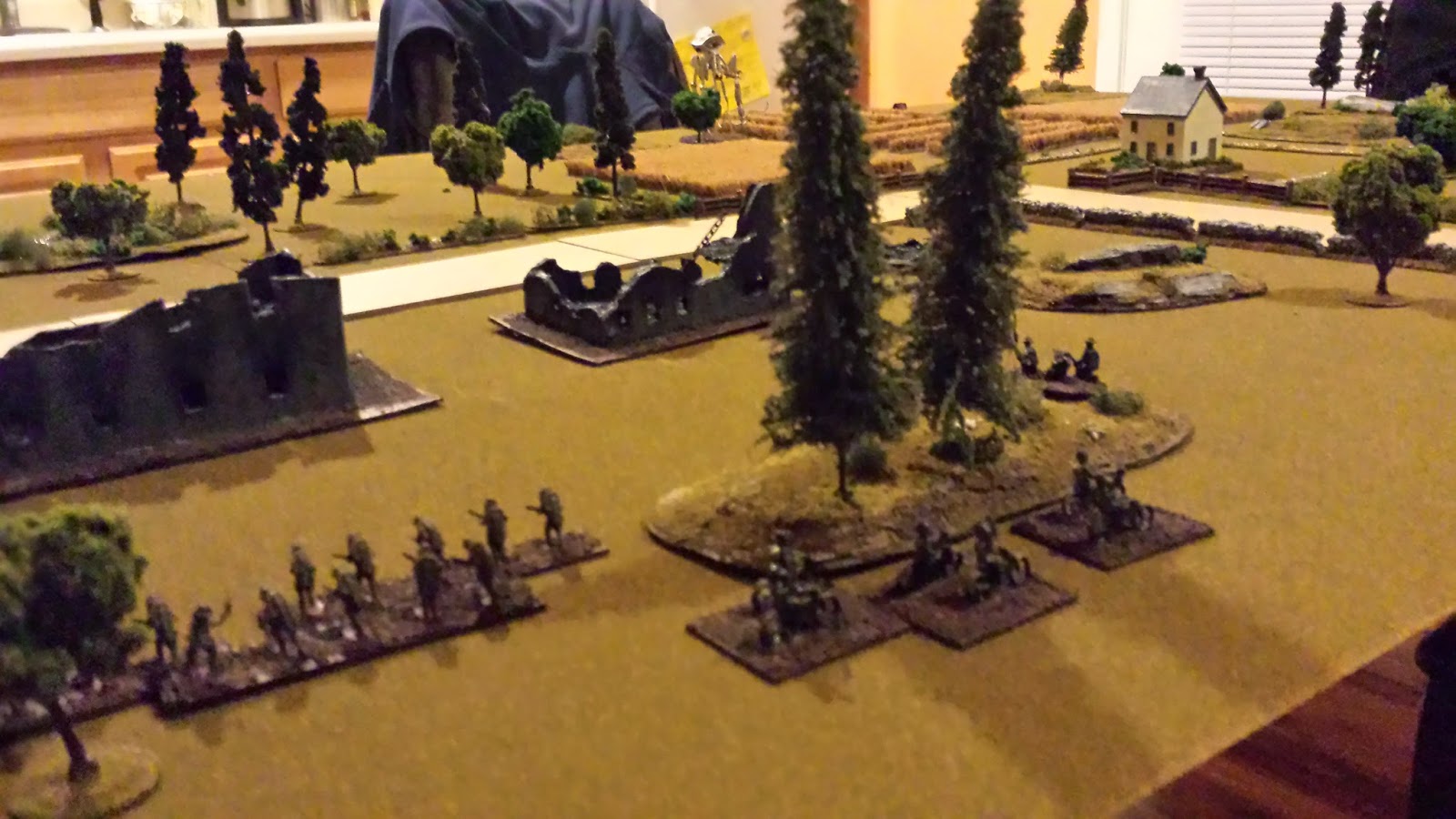 The second round sees more action. The humans go first again, deploying more infantry, HMGs, Rough Riders, Mortars, and a command unit. Everything pushes up either into the woods to the right or the ruins to the left. The Martians bring on an assault tripod with attached sniper drones, deploying them at the center, and marching them straight to the middle of the board. The human infantry deployed last round push forward, the ones on the right moved out of the woods and into the farmhouse to shoot unsuccessfully at the sniper drones. The infantry in the ruins on the left also pushed up, daring to cross the road into the woods and swamp on the Martian side of the table, at this point, entirely unoccupied by the enemy.  The rough riders burn an order and immobilize the scout, and on a series of lucky shots (mortars and HMGs mainly) it is destroyed! On the Martian turn, some shots are fired at the infantry unit hiding in the house, killing one and routing the rest, but otherwise, there's not much action. 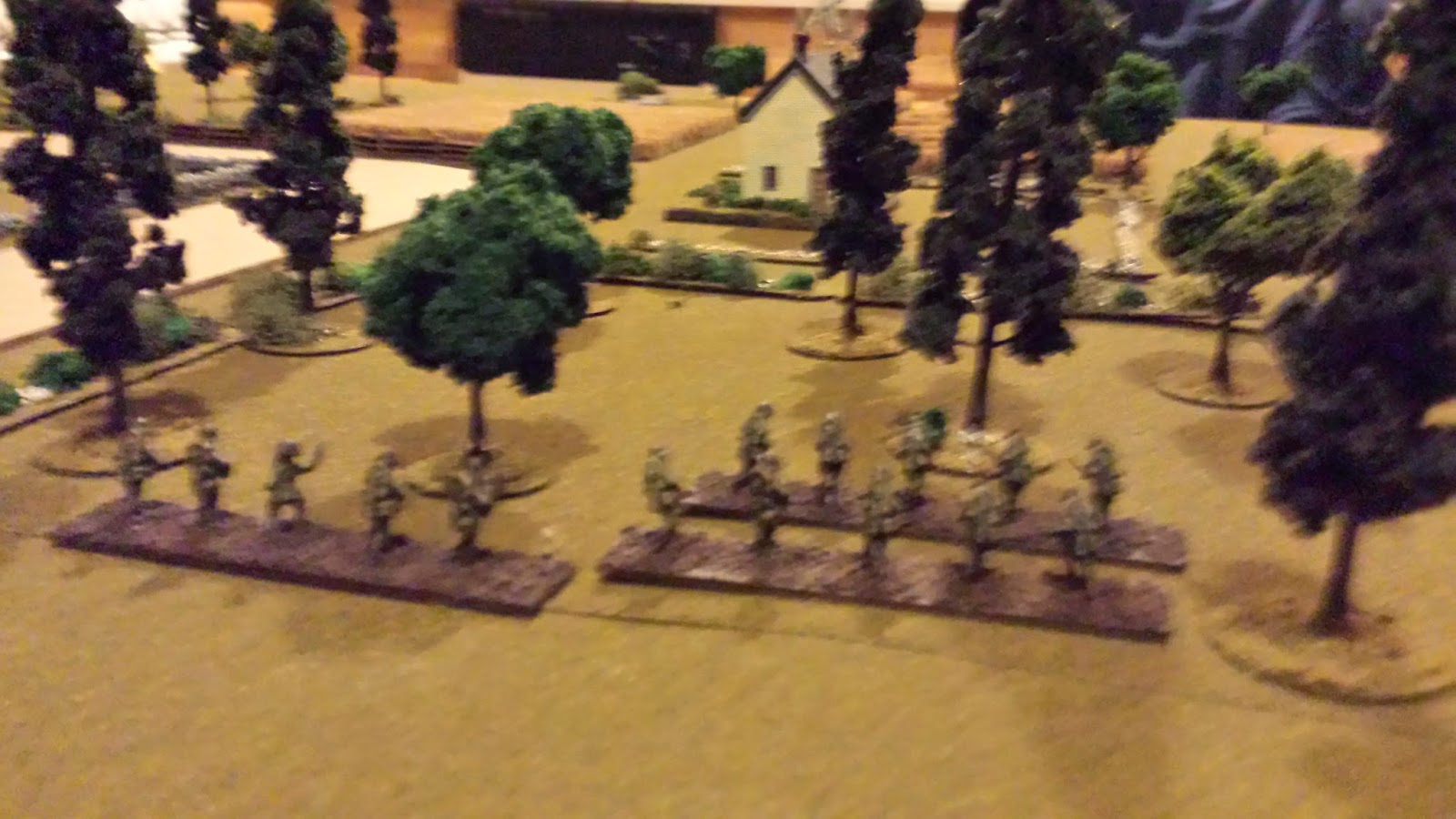 Round 3: Things get intense. The Martians deploy a Black Dust Assault Tripod, as well as a slaver and various drones, all on the left side where I'd advanced my infantry. The humans brought on a MKII tank unit, a MKIII tank unit, another commander, and Heavy Artillery. The drone placement was particularly unfortunate - it allowed the Martians to immediately dominate the forest on the human left, and to very quickly exterminate the infantry unit hiding in the swamp, at the loss of only one shock drone element. 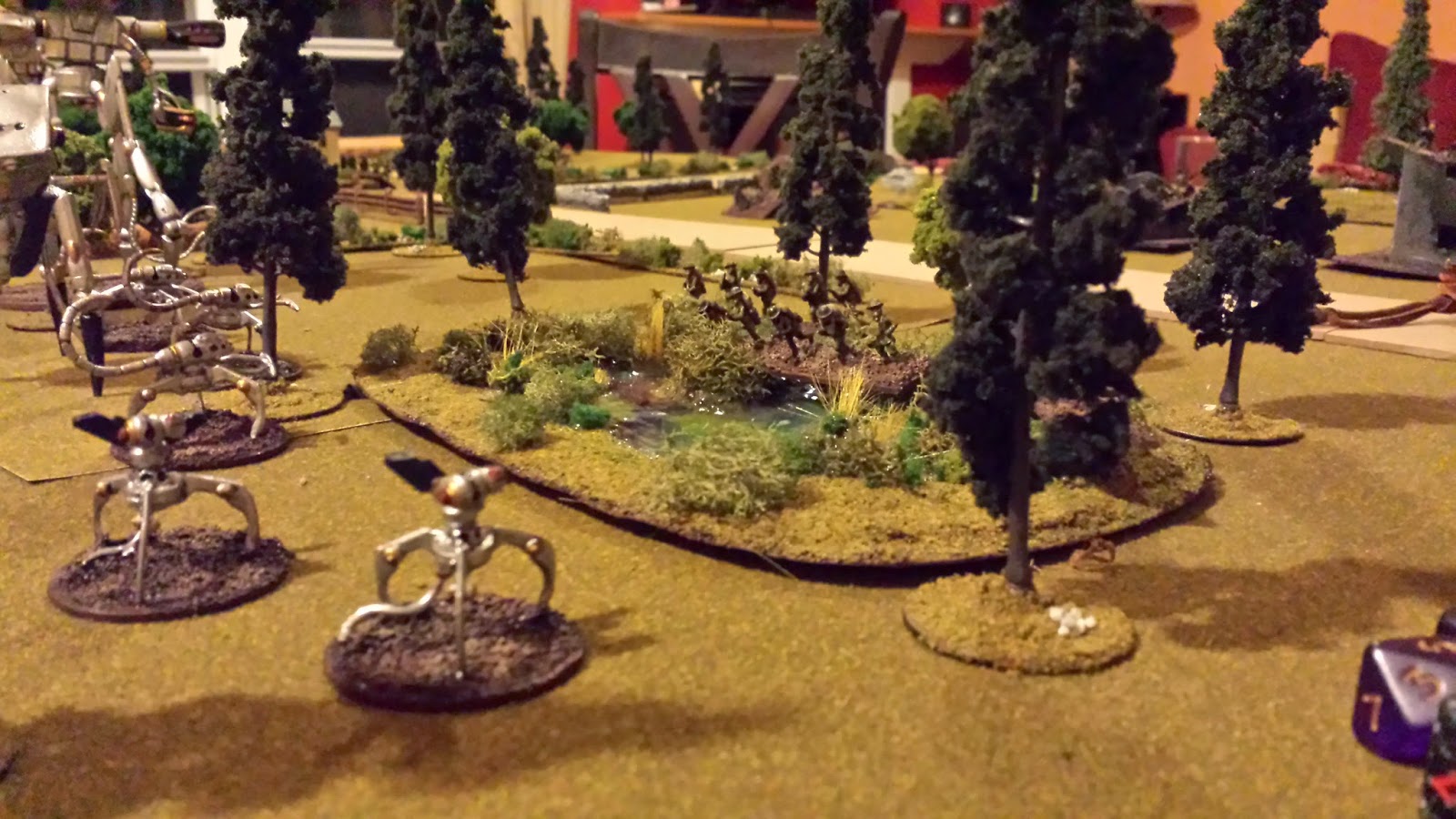 Further, the MKIIIs were instantly destroyed by the drones after weakening the assault tripod they were attached to.  The wife rolled three hits with them, and three kills. That really, really hurt. 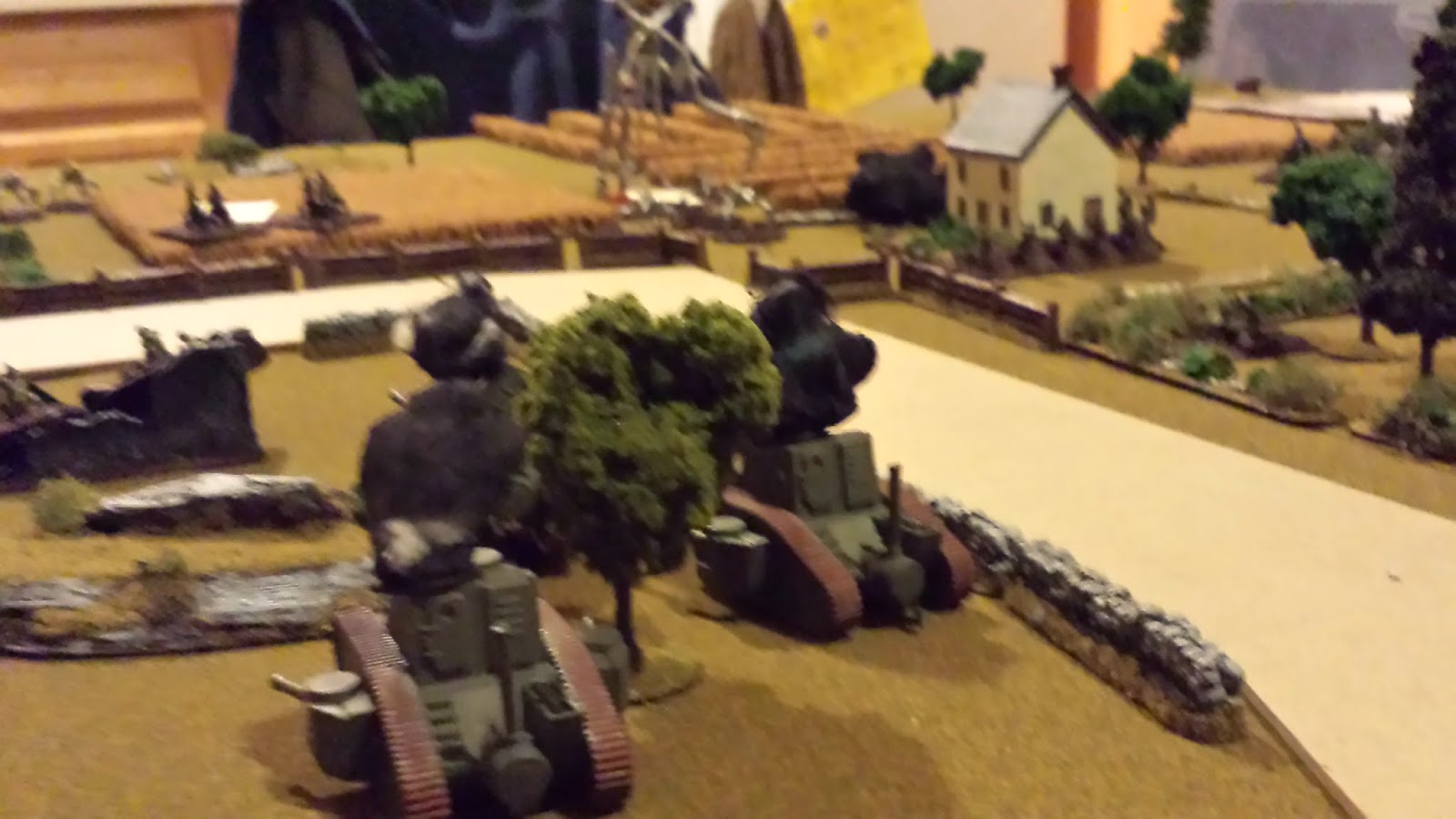 Of course, the wife immediately professed her undying love of the Sniper Drones, "I love them. We need to get more."  If she loves them so much, she can buy them herself...

Round 4, Aka, put everything else on the table.  3 units of MKIIs and 1 unit of MKIIs for me3 assault tripods, a scout and a grenedier for the wife.  Worse, the Martians won the initiative for this round which cost the humans dearly. 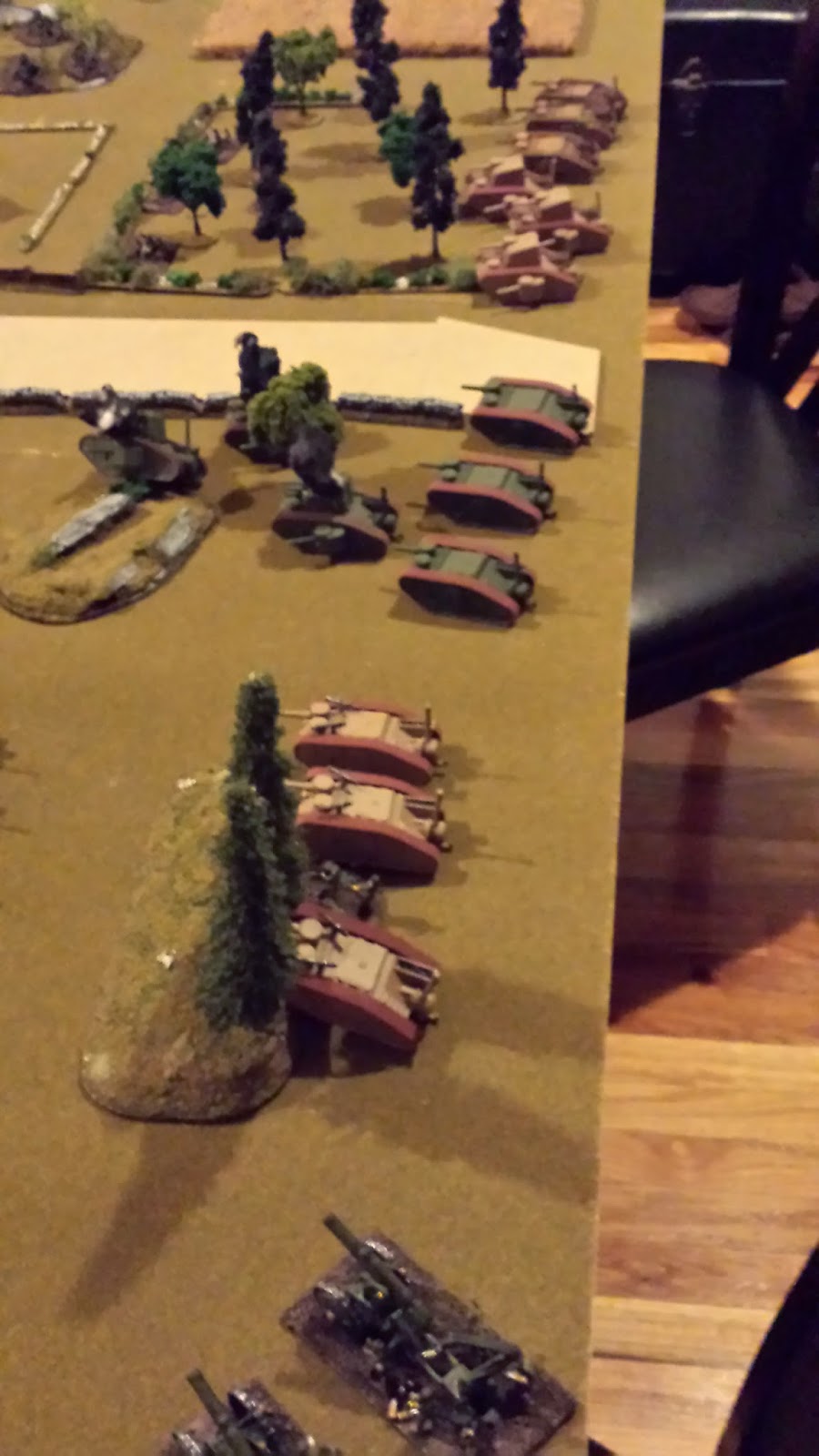 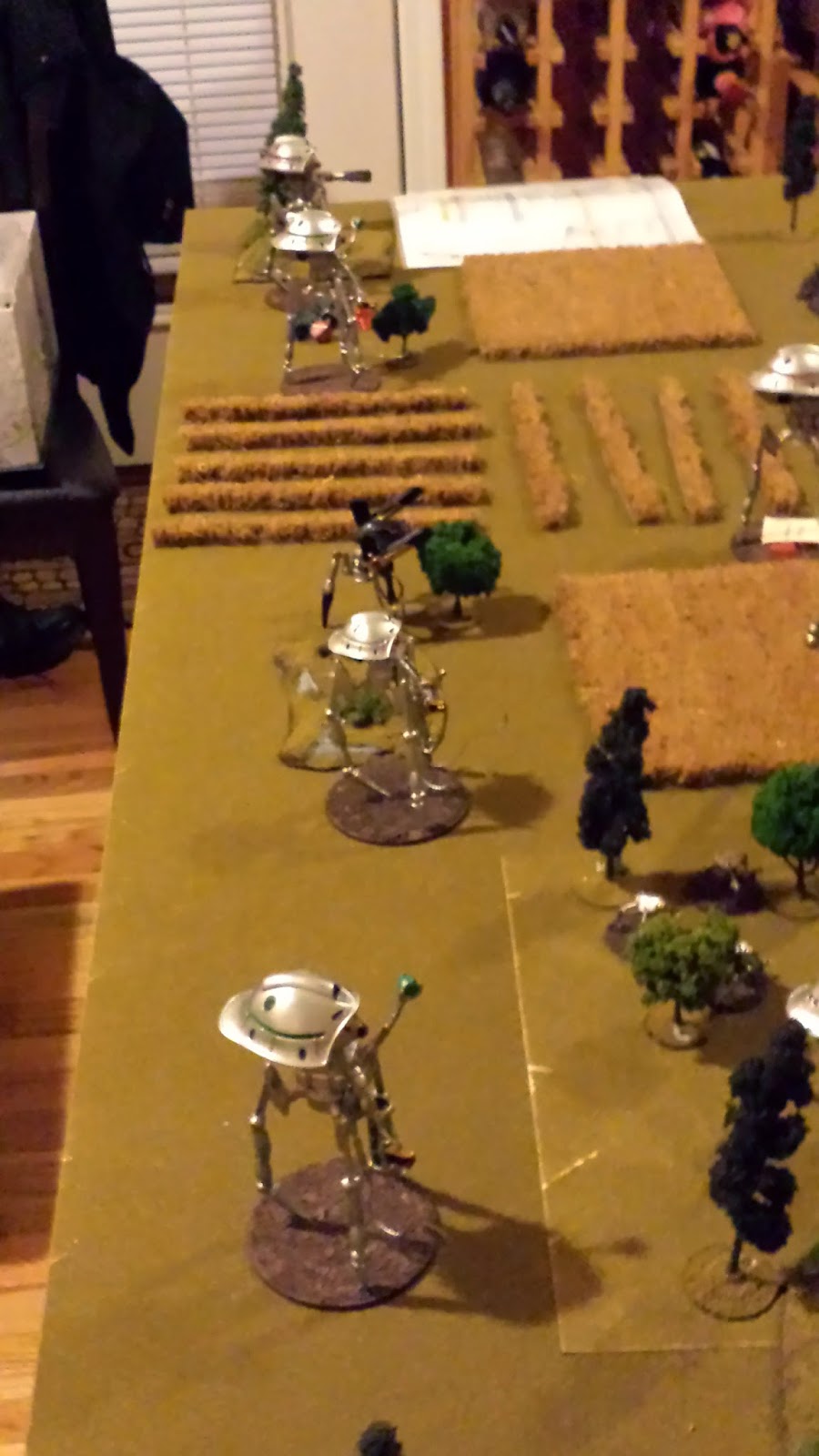 Things started looking grim almost immediately.  The Snipers took out another entire unit of MKIIIs, and the drones started their trek across the road to challenge the humans hiding in the buildings. The big guns, so fantastic when they hit, seemed unable to hit even immobilized tripods. 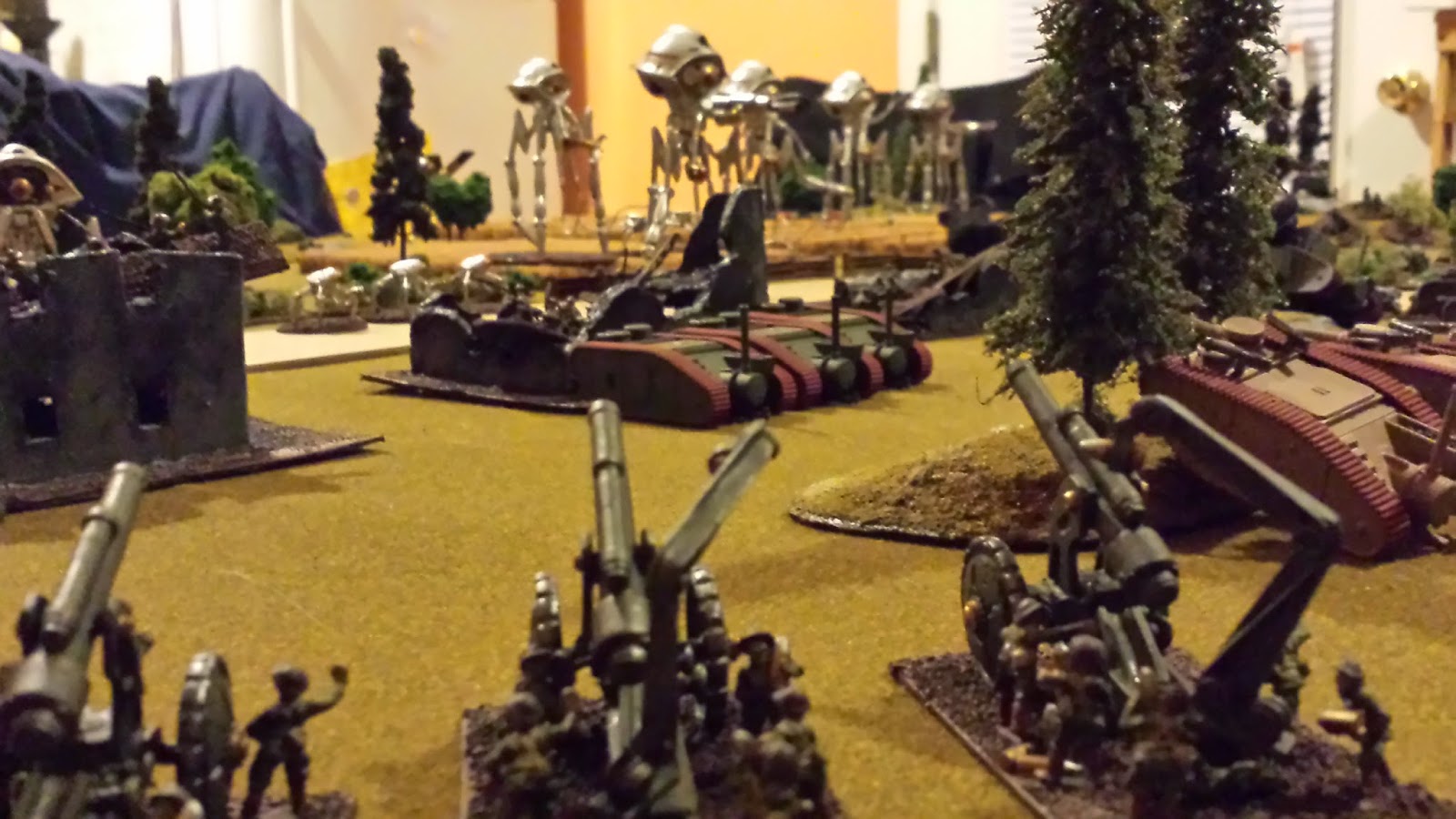 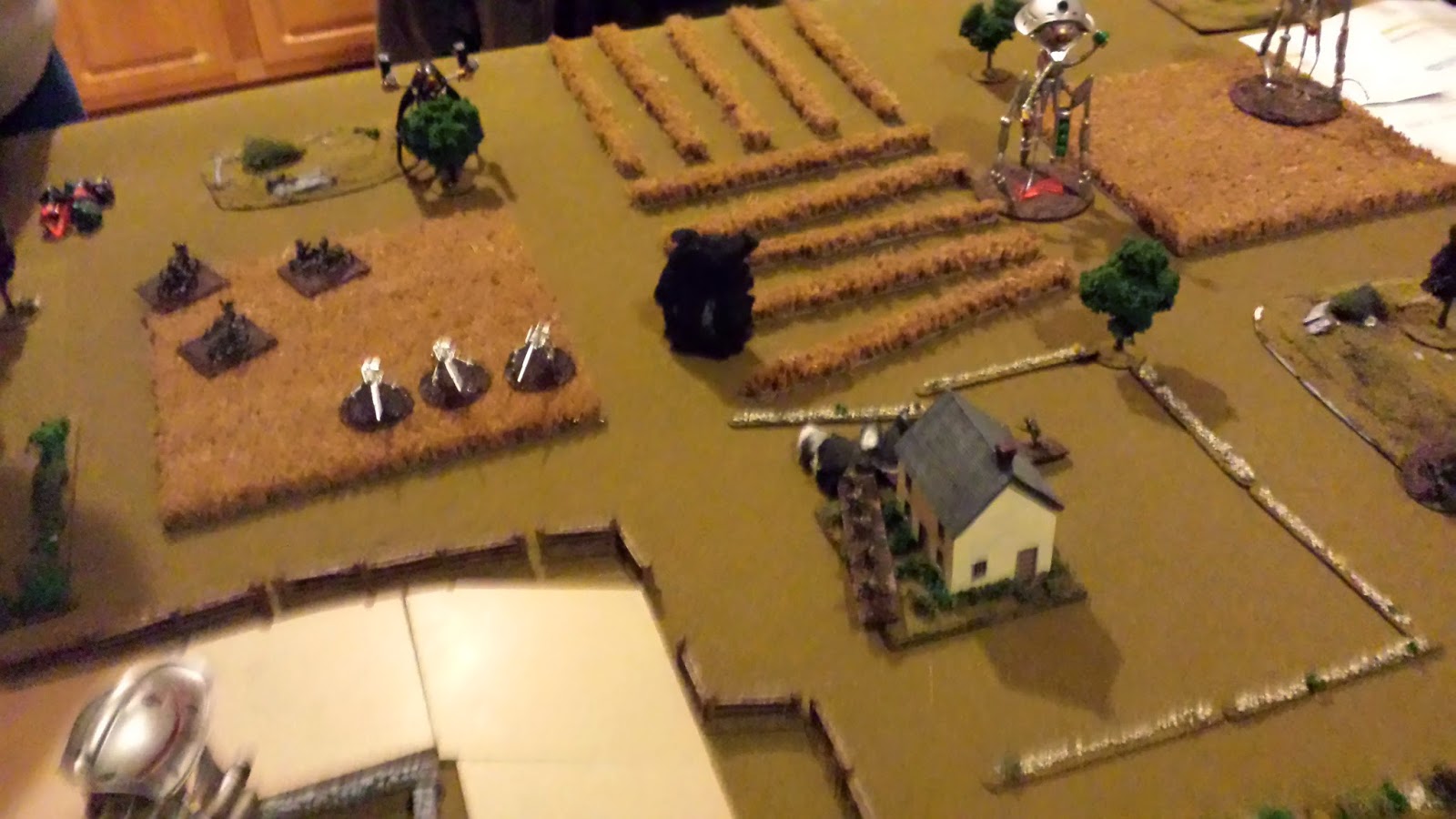 However, in combination with the newly arrived tanks, they did manage to destroy the damaged and immobilized tripod at center, stranding those damnable sniper drones far from the slaver (which we house-ruled as being able to reprogram them, at least until the Scientist comes out).  The scouts on the left were cut down by the human forces hiding in the building, but some black dust took care of most of them. 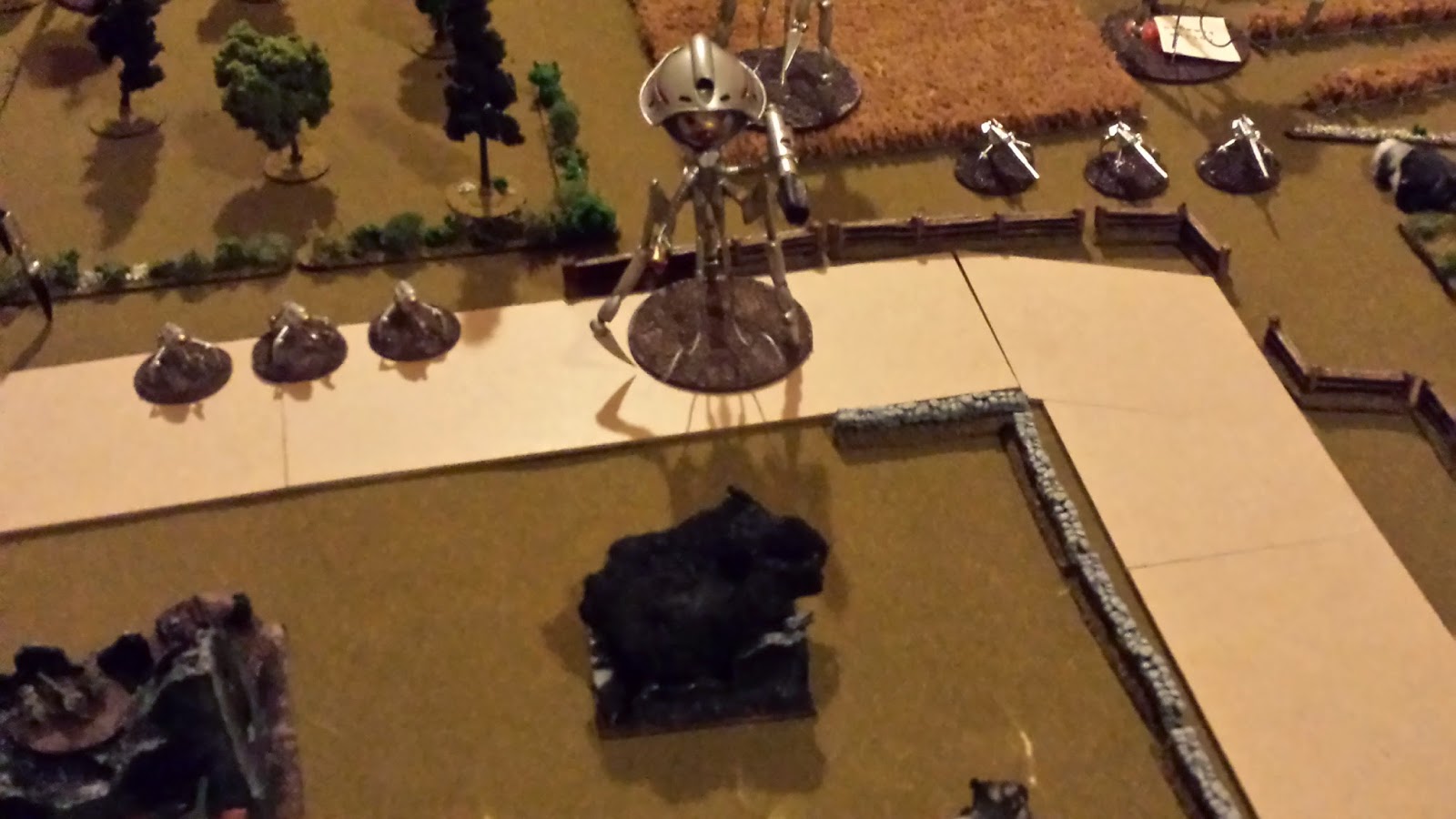 The Martian advance was harsh, dropping black dust and slaughtering my tanks, and finally breaking the American forces at the bottom of the 5th round.  A Martian victory and a very smug wife. A pretty dramatic game and a fun scenario.

"Yeah, we definitely need more Sniper Drones," she says.  No, no we really, really don't. 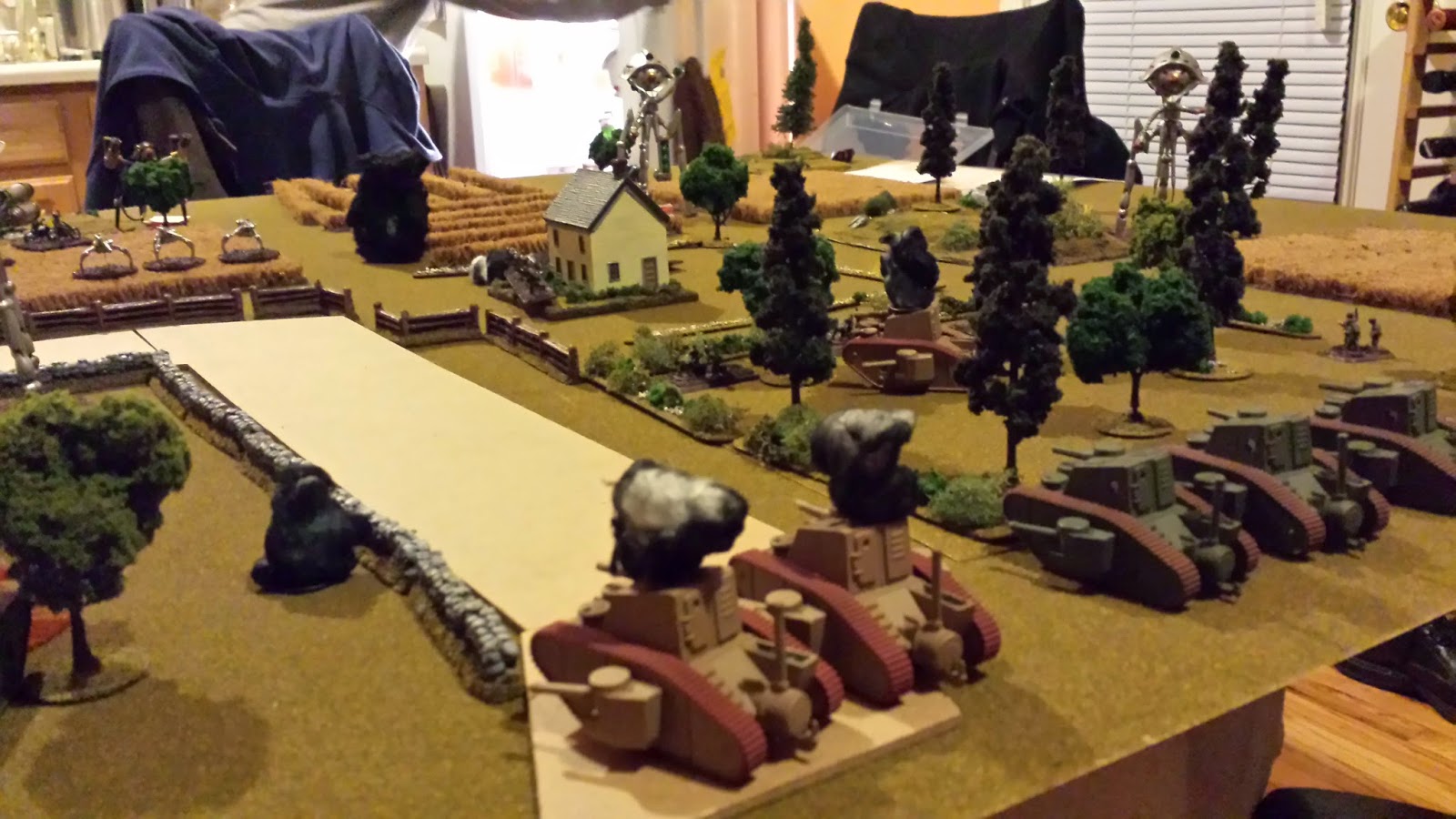 1) Sniper Drones are scary.  I should have put my MKIIs a bit ahead of them, so they would have been forced to target them instead of my more valuable MK IIIs.  But yeah, scary. They're better than a unit of MKIIs (I'd say the +2 over the tanks defense is more valuable than the -1 to armor, and they count as infantry in terms of cover bonuses.) They're just as powerful (+2) as the tanks, get 3 dice to attack, which means they can potentially wipe out a full 3 element unit at their maximum range of 30", while the tripod they're attached to can, at best, kill one and rout the others. Yes, they have weaknesses (a roll of one on an attack roll removes them from the game - out of ammo), but as long as they stay in, they will do serious damage. Next time, I'll be sure to screen my MKIIIs with MKIIs. The drones are unintelligent and must fire at the closest vehicle before any other target. This is a good reason to have more MKIIs than MKIIIs, to act as less expensive screens.  Speaking of expensive - 75 points for the drones, to a tank's 165/225 respectively. This one unit took out over 450 points by the time I deactivated them by taking out the attached tripod.  My wife did a good job in deploying these two on the second round.  It ran right up to center where it could shoot at all of my units as they deployed.

2) The scenario needs a bit more time between deployments.. I liked the staggered effect, the small scale stuff forcing you to deploy differently to react to what's happening on the table, rather than a single plan and single deployment, but it felt rushed.  Obviously, having to deploy every turn also slowed the actual pace of the game down a little bit but it was worth it for the fun tactical elements.  So, as a solution, I'll try this later in the week:

The first few turns will be pretty quick, but it also felt crowded at the end, so I'm going to cut back on points the last round. Besides, my painted up forces aren't even... yet.