The outskirts of Belchite, September, 1937 (or something like that).  The Lincoln Battalion has fought its way, under withering fire, to the edge of the town, and prepare to fight their way to the church.  With the town surrounded, we'll be using the Flank Attack scenario in the Chain of Command book.  Jamie is taking on a platoon of Nationalist regulars, while I'm playtesting a custom Abraham Lincoln Battalion list for the Quinto Campaign I'll be starting next week.

The Lincoln list I'm using is thus: Senior leader and runner,  2 sections with junior leader, each three  teams of 5 men.  Aggressive, +1 morale roll, and automatically uses the "Antifascisti" rule in the SCW supplement. [Edit: I'll be adding a 2 man scout team to the HQ for the campaign]

We decided on eight support for the Lincolns (attackers), and the Nationalists got 4.  I selected a T-26 Tank, an LMG for each section, a commissar, and molotov cocktails, mostly to be sort of historical.  Jamie took two LMGs and a UNL-35 Armored car, but decided to change an LMG to molotovs when he saw the tank. 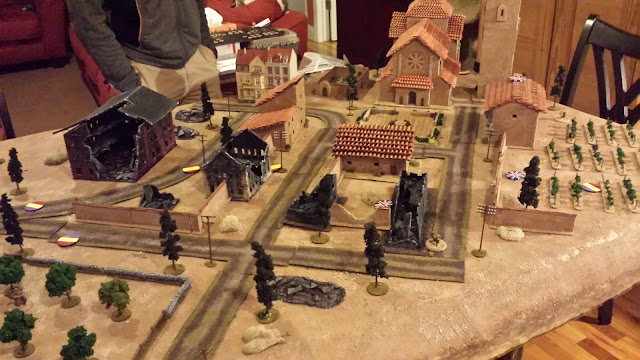 In the patrol phase, I got four free moves and pushed hard into the vinyards on the right. Jamie pushed forward aggressively with his three markers and locked himself down before I could get into an optimal position. This was the first time I'd played the Flank Attack scenario, and having six jump off points to juggle is a very interesting experience. You get lots of choices, but your opponent is far more nimble. 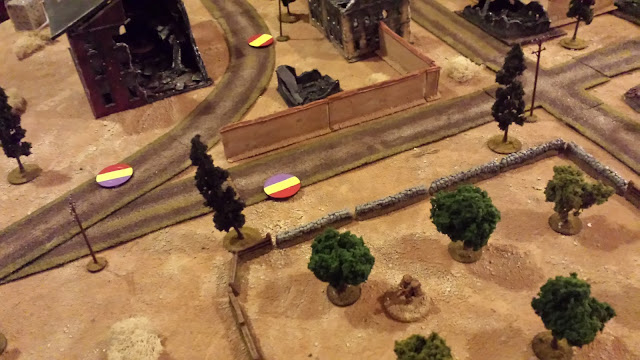 I placed one jump off point in the olive orchard. The enemy matched me with one inside the ruined factory. 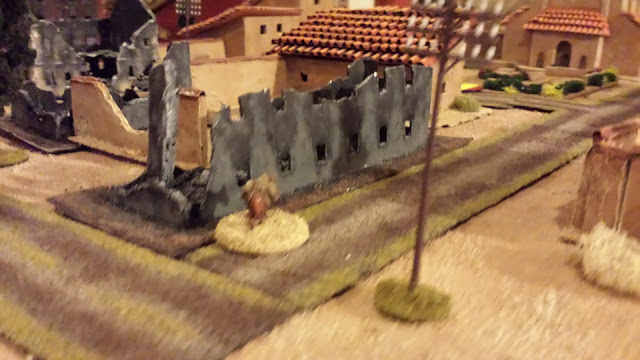 Another just behind a cluster of buildings. The Nationalists had one in the furthest building in the visible center above. 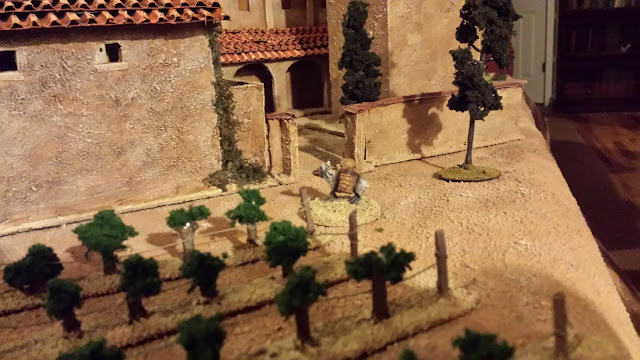 And the last on the far edge of the table, near the vineyard gate. The enemy had one behind the tower, far too close. 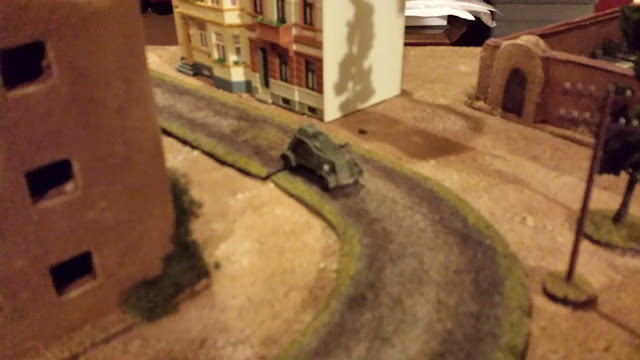 We both had the same force morale (9), so we rolled off and Jamie got to lead off, bringing on his armored car, advancing just to the edge of an intersection, carefully out of line of sight of the long straight road. Its machine guns were poised to support the section of infantry he brought on from his JoP behind the church. 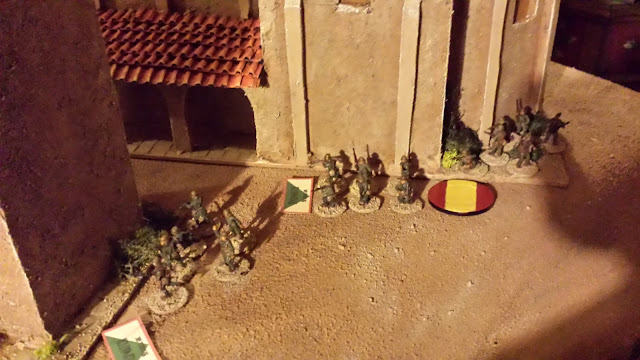 The Lincoln's support led the way, a T-26 rolling up and leveling its guns on the shadow of the car parked around the corner. 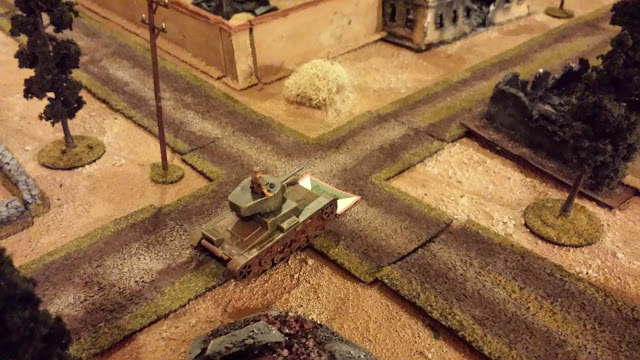 A Nationalist section poured out of the factory, and moved behind the high wall in a single tactical bound. They were now within reach of my jump off point in the orchard. This was the more heavily armed unit with both an LMG team and a rifle team armed with Molotov cocktails. 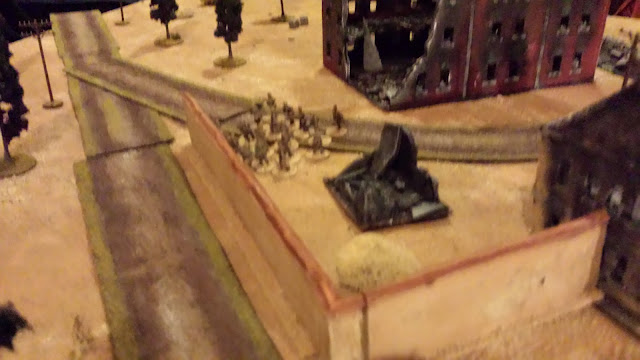 The less well armed section moved in a rush (taking shock) towards the vineyard gate, and threatening another jump off point. 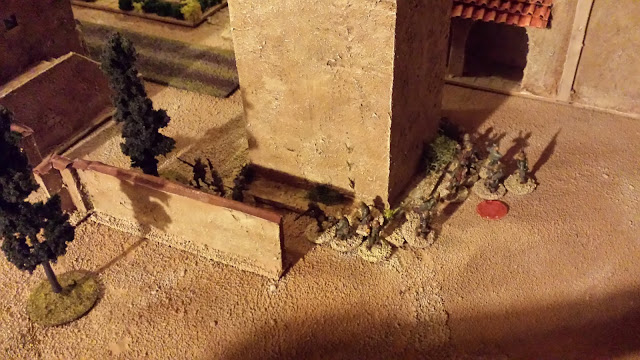 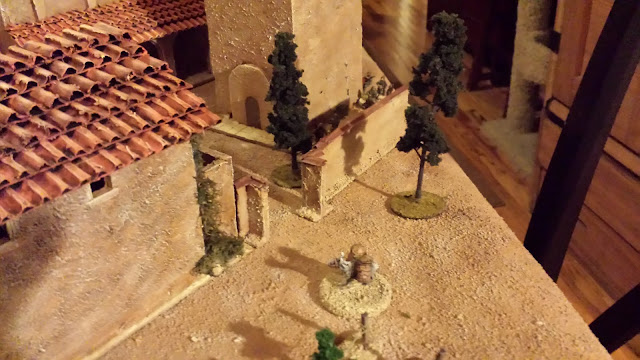 The Lincolns rush from their concealment, and take cover in the vineyard. One team ambushes the approaching Nationalists with hand grenades thrown over the wall. 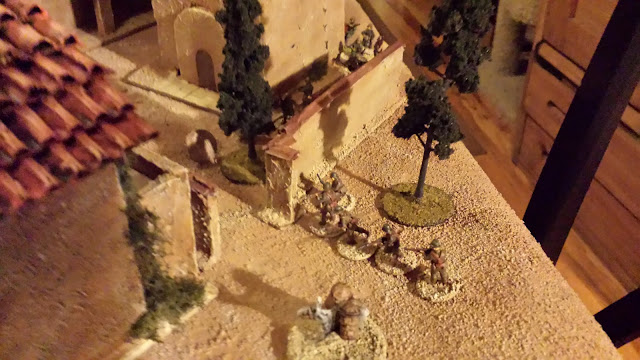 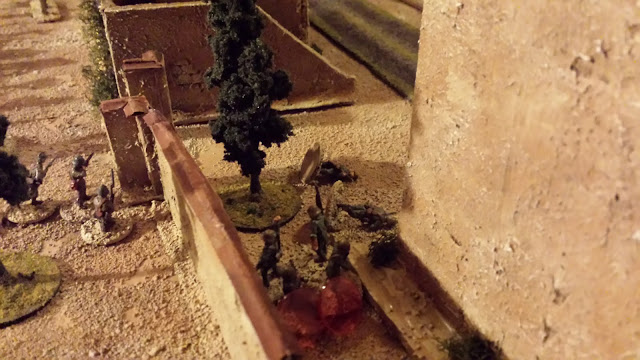 The three grenades nearly wipe out the lead rifle team, and wound their Junior leader. 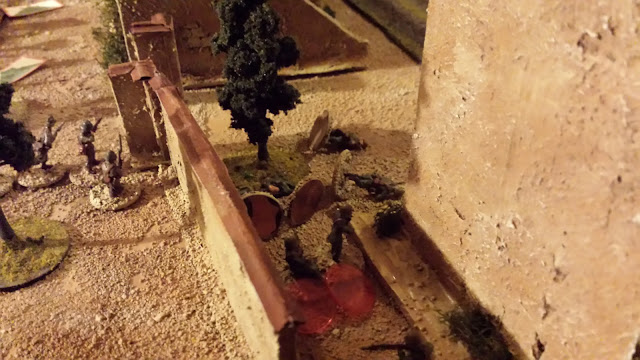 Meanwhile, the armored car, still just out of sight of the tank, opens fire through the gate at the exposed grenadiers. 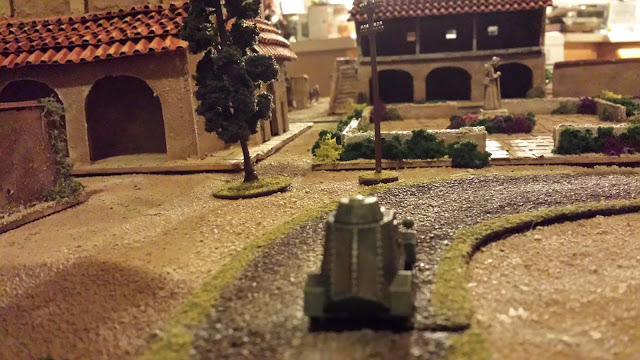 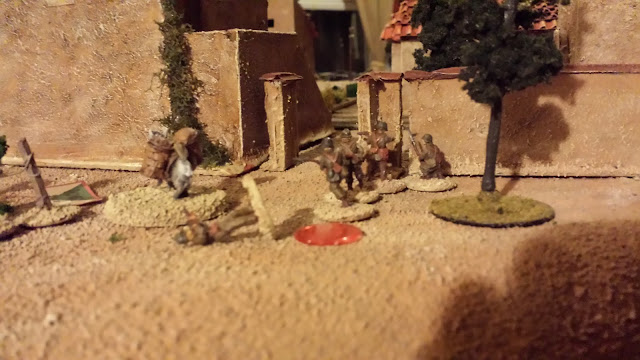 With one Nationalist team nearly wiped out and the others making a rush for the building overlooking the orchard, the Lincoln's senior leader personally leads a risky charge through the gates. Jamie interrupts with his CoC die and the armored car throws a bit more shock before my men meet his. Despite a small advantage, the Republicans lose by one in a bloody contest. 7 Anti-Fascists for 6 Nationalists killed. My men retreat back into the orchard. But although they hold the ground, only a handful of the Nationalist soldiers remain. They lost a junior leader in the melee, and one of mine was wounded as well. 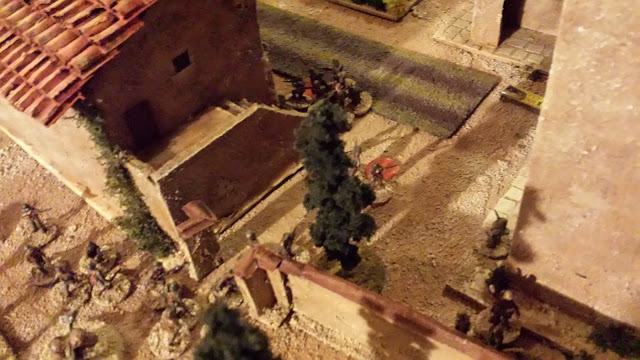 Far worse though, in that I lost my senior leader, and rolling a 6 on the Bad Things Happen Chart resulted in -3 to my force morale. With the leader wounded as well, I was down to a 6. 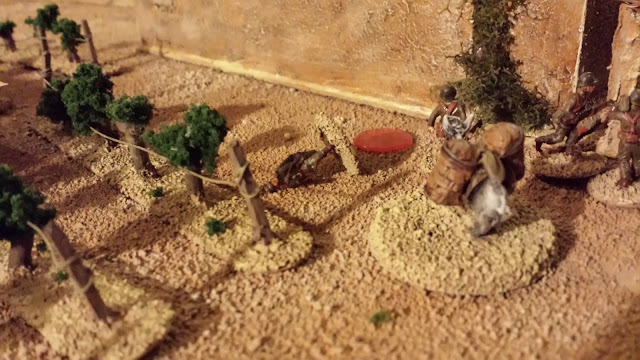 While the Lincolns fell back on the left, the Nationalists sprinted for the jump off point in the olive grove. The got close enough to prevent its use and capture it if the turn ended. 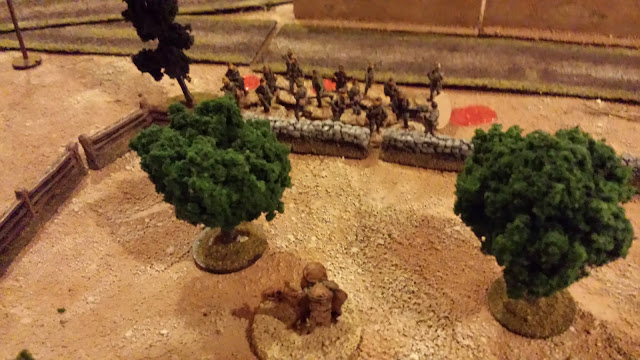 Things were looking pretty terrible for me at this point. But then one of those weird quirks of fate occurred. I had intended to try to catch Jamie in the open as he made for the olive grove, but he rolled very well to rush it, and got just close enough to stop me. Unable to deploy there, I decided to double down in the vineyard with my second section, and as it turned out, this was the better choice. Strangely, by succeeding in capturing the jump off point, he prevented me from making what probably would have been a terrible mistake. 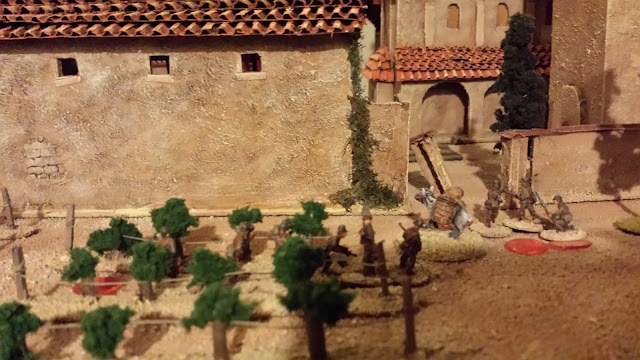 Fire from the armored car pinned a team that hadn't made it into cover. Led by their commissar, they poured through the gate. With the enemy so close, I was able to deploy close enough to get both sections into the close combat with what remained of the Nationalist platoon. 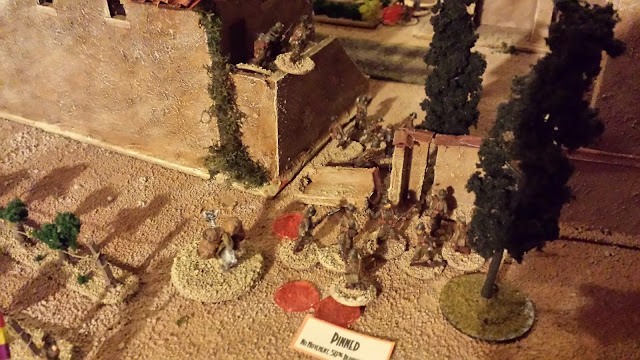 They routed without a roll needed, one team falling back before taking cover (pinned) while the other breaking. 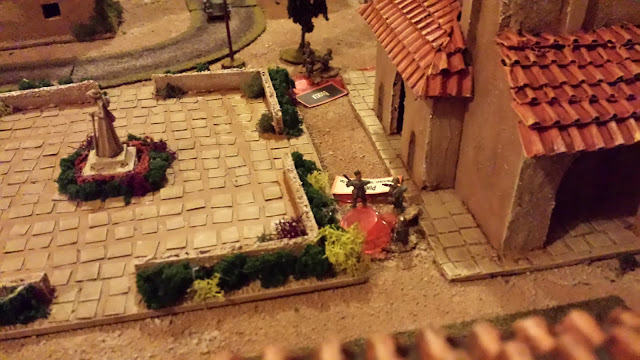 With the enemy infantry broken, the commissar directed two teams to hunt for their senior leader, who had been too far away for the combat. They got close enough to initiate close combat around the corner. But the little fascist just made a run for it. 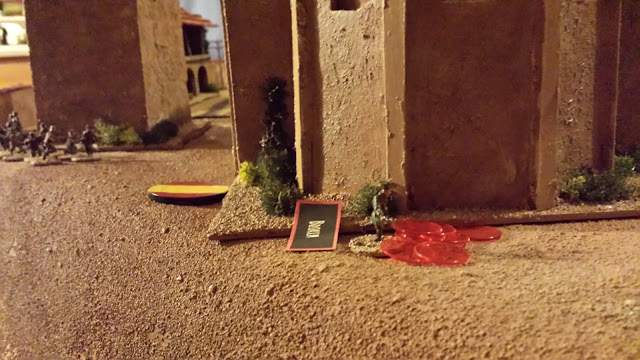 With the armored car moving to try line up a shot on my infantry, my tank finally had a shot. 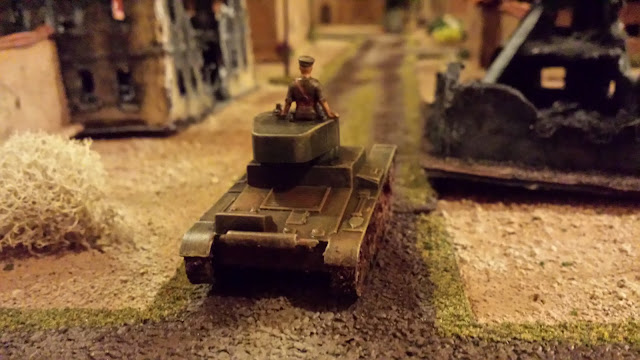 After several direct hits and the driver having a panic attack, the  crew wisely chose to bail out. 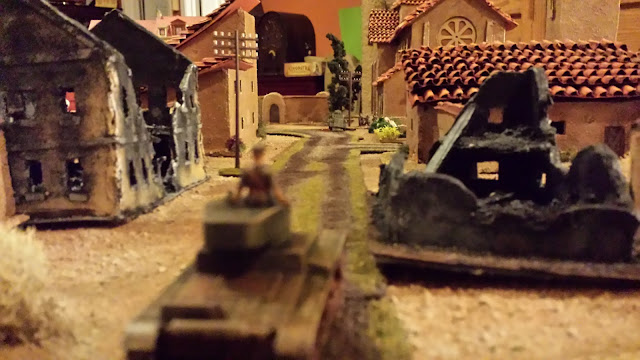 Meanwhile the infantry finally caught up with the Nationalist leader. 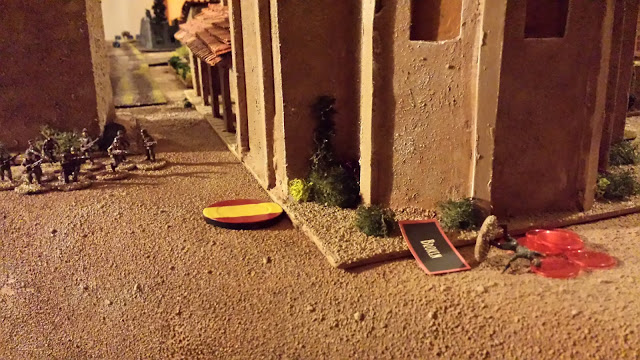 The men afterwards credited the commissar for rescuing the situation and leading them onwards to Belchite.  A propaganda coup for the Comintern folks at Albecete! 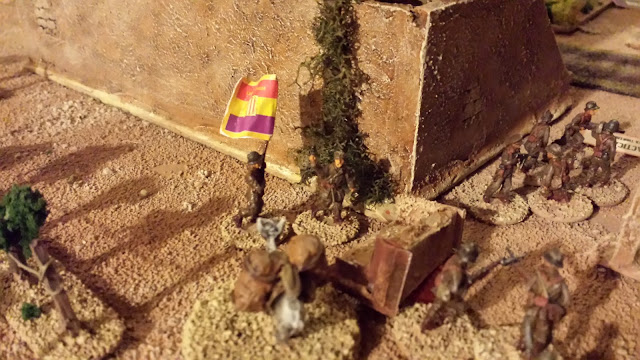 A close and ugly game, but with Jamie's morale dropping to zero (he gamely fought on even when he only had 3 command dice), it was a clear Republican victory.

Sadly, its hard to say much about my Lincoln list, as the antifascist trait never really came up, although aggressive clearly benefited me on several occasions. The commissar rules, however, were extremely helpful, and I felt that the way it played out very much reflected the history of the Battalion (with the commissar taking over when a leader was shot).
Posted by Unknown at 1:11 PM