Oh, hell yes.  My birthday gifts have arrived. My wife picked me up the compressor, and I got a beautiful Iwata Eclipse airbrush from... me.  I'm a very generous man. 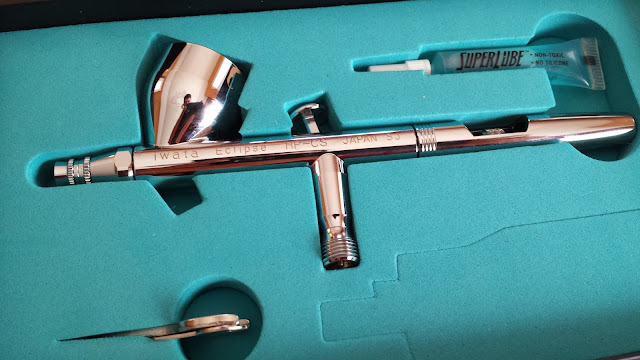 I have to admit to being seriously intimidated by airbrushing, and while my desire for one was strong, I put it off for a long while over fear that I would just suck at it and have several hundred dollars of buyers remorse taunting me from the shelf.

Turns out, I need not have worried. Airbrushing is EASY. Almost ridiculously so.

Case in point, the two 1/72 PSC Shermans below.  The one on the left was brush-painted, and I am rather proud of it. I think it's some of my best work with drybrushing, washes, and highlights that I've done, especially considering how hard it is to drybrush curved surfaces and flat areas. I'm very happy with it and it took quite a while (many hours over the course of many days).

Yet the Sherman on the right, done in about an hour with an airbrush (and most of that time was cleaning the airbrush - one of the things that really slows it down), is just as good, maybe better. 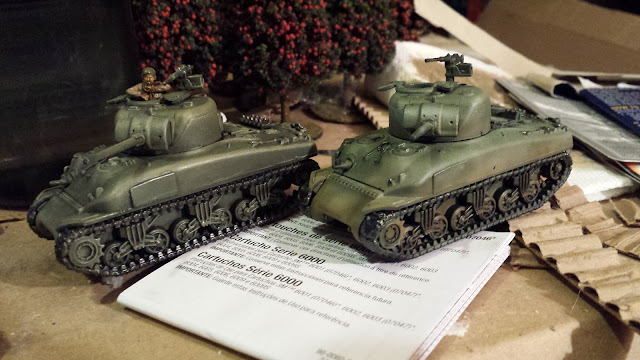 These tanks were primed black, and white was first airbrushed onto areas I wanted highlighted. Seconds later, it was base-coated, and the highlights appeared automatically.

On the Churchill below, the highlights came out easy, and effects like diesel smoke are unbelievably easy. It could be better, but not a bad first effort. 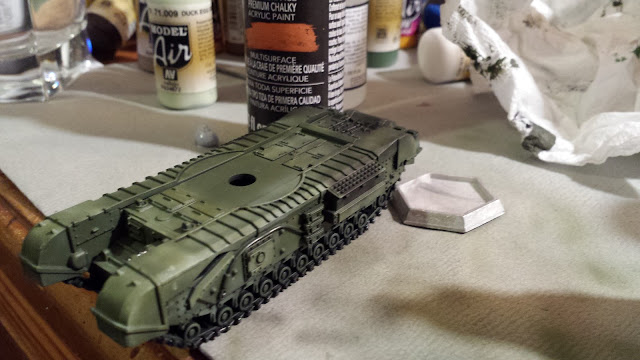 As practice, I reprimed some All Quiet on the Martian Front tanks and painted them. These were actually my first attempts, and they didn't come out quite as well as the WWII tanks (not the same quality model anyway).   I also played around with a brushed-on chipping effect here. 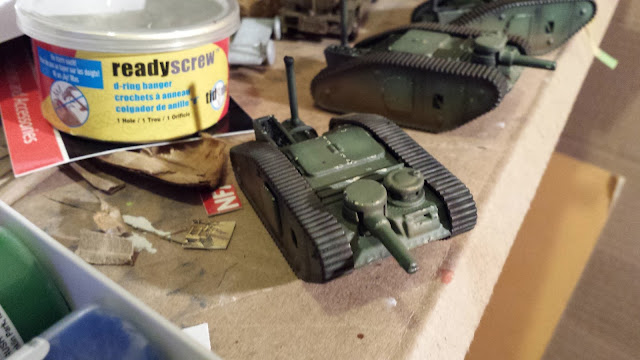 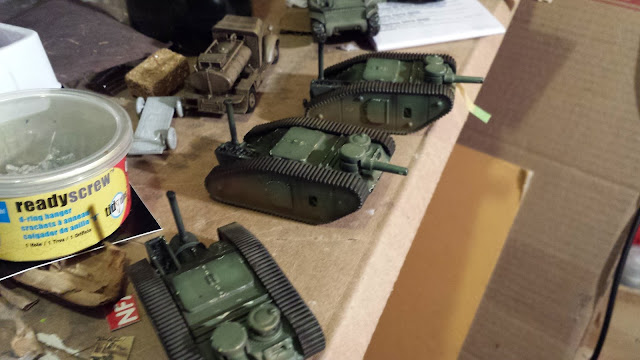 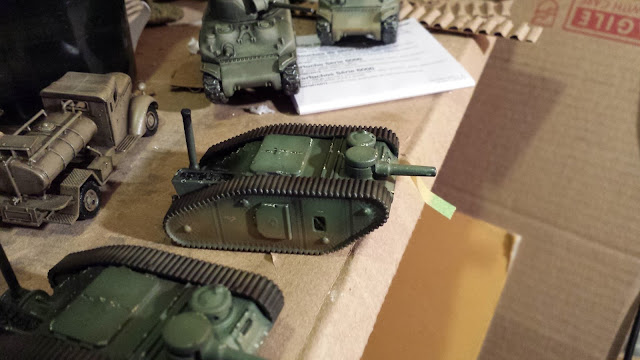 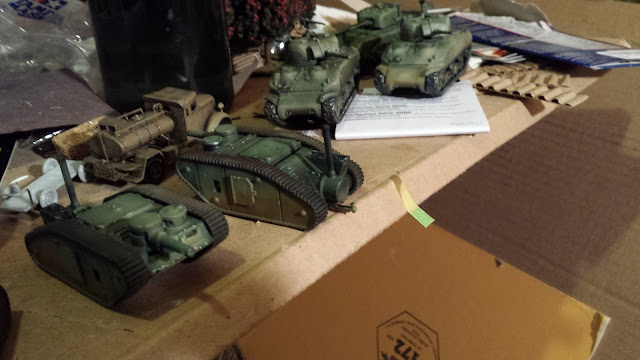 The Churchill all put together. I'm holding off on the weathering until my decals arrive. 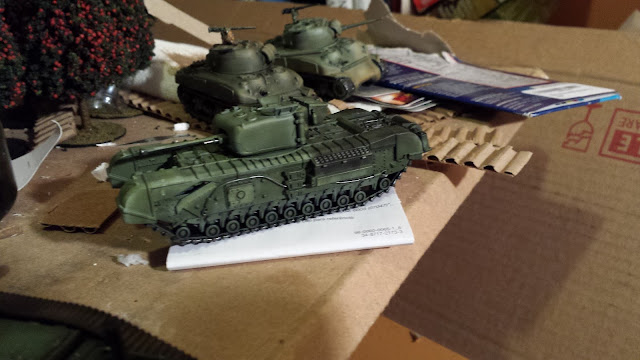 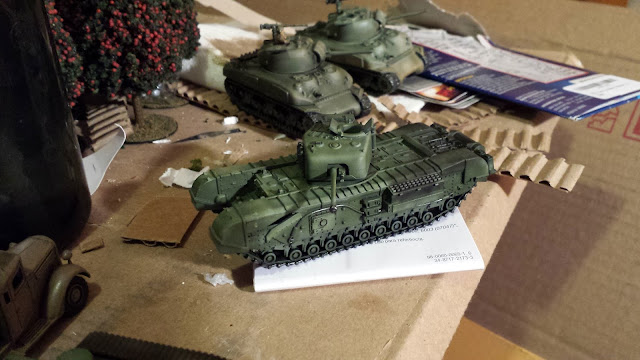 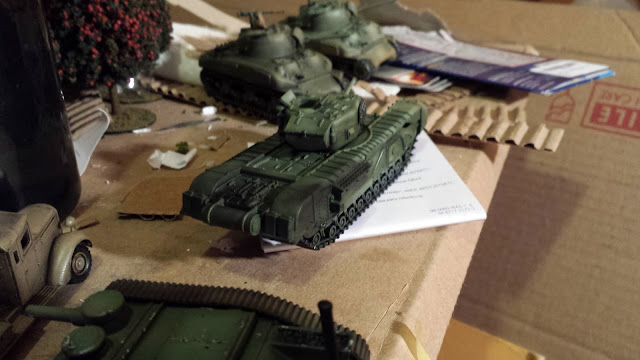 The lesson here is "fear not the airbrush", excepting perhaps its price tag. It's not cheap to get into, but the learning curve is not as high as people seem to say, at least in my opinion. However, I would suggest that a quality airbrush very much makes a difference, based on the difference between the cheap "Master Airbrush" I received for X-mas and the Iwata I just bought.

The main downside to the airbrush is the maintenance and cleaning. It feels like it takes longer to clean after each color than painting with the color, but that probably isn't precisely true. I'm sure I'll get quicker at it with time. There are lots of little finicky moments, thinning of paint is important, and you will make mistakes, but the same is true of brush painting.  In the end, this is a very fun tool to play with.

I have a few more tanks I want to do for practice (some Stuarts and some SCW stuff), but then I'm moving on to my next real project... Battletech! 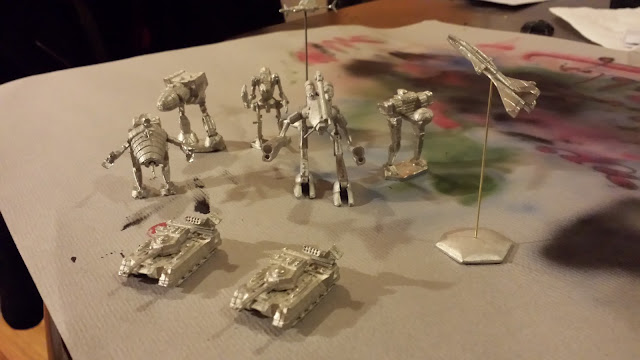 It will be a challenge for my new airbrushing skills to paint such small models, but I'm feeling ready to take the plunge.