Smoke Jaguars on the Prowl

The battle for Dueros continues.... The Red Hand mercenary company has fallen back to a defensive position as they prepare to retreat off planet in the face of the Clan Invasion. A battery of Long Range Missile mechs awaits Clan Smoke Jaguar as they give chase. 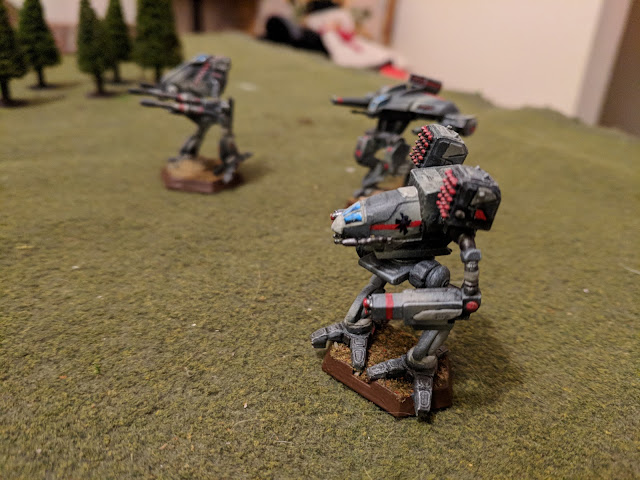 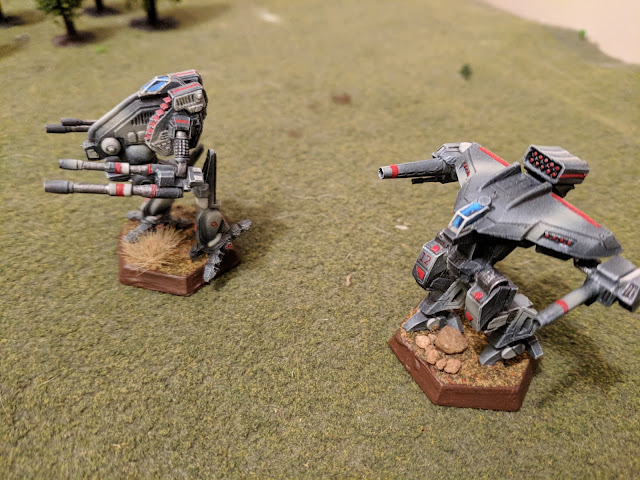 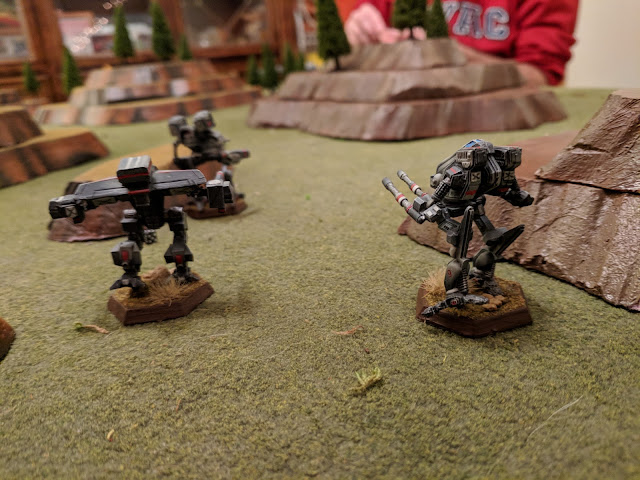 As the Clan Mechs advance, the mercenaries begin their long range fire. Two Archers and two Longbow provide a tremendous number of missiles, with an Awesome and an entire company of LRM Jump Infantry in support. 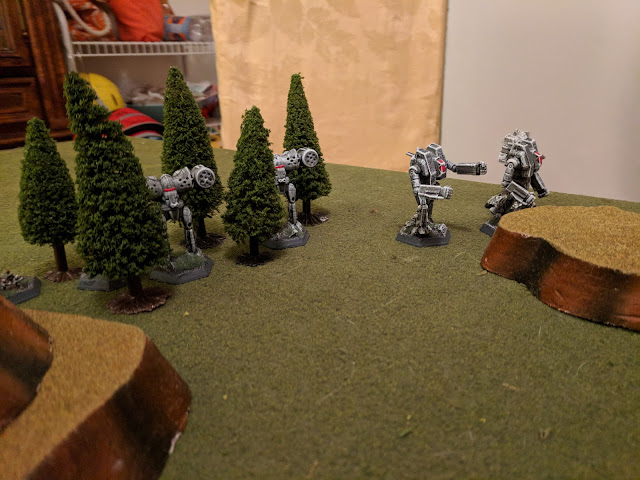 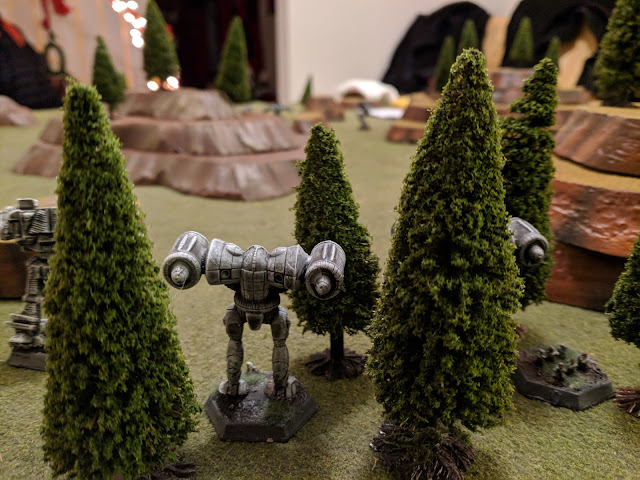 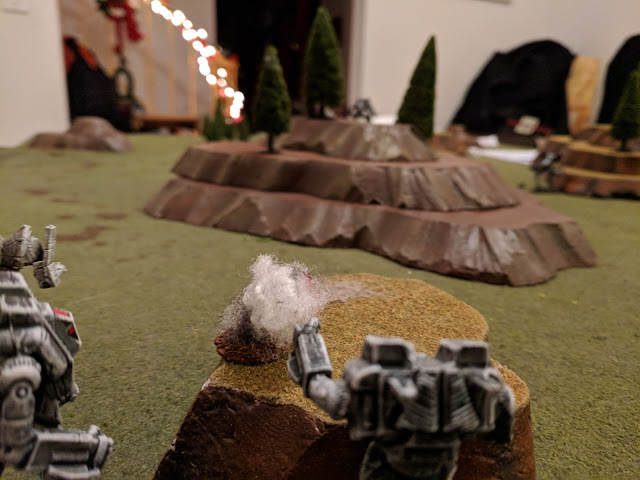 The Vulture dares to crest the hill, taking significant fire and trying to draw some of the mechs away from the center mass. 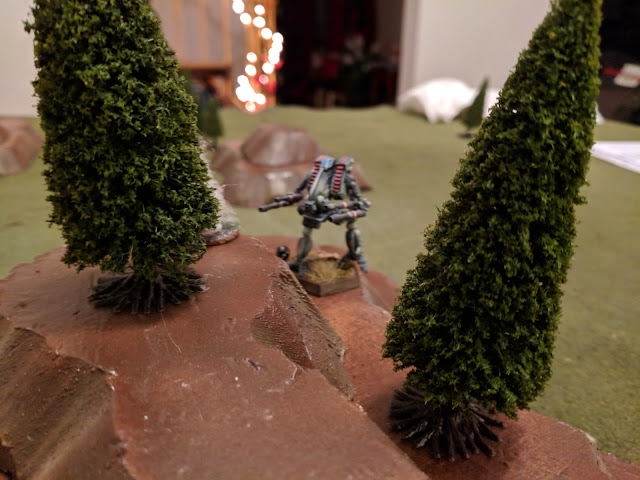 This is somewhat successful, as the Awesome and Archers move to intercept. Yet the price is signifcant - several LRM 20 packs connect, shredding the mech's torso armor and making it very vulnerable to ammo explosions. 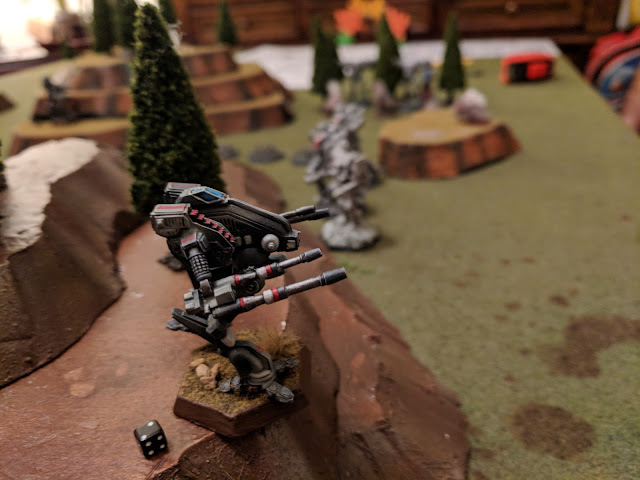 The Bruin moves up to support the Vulture. 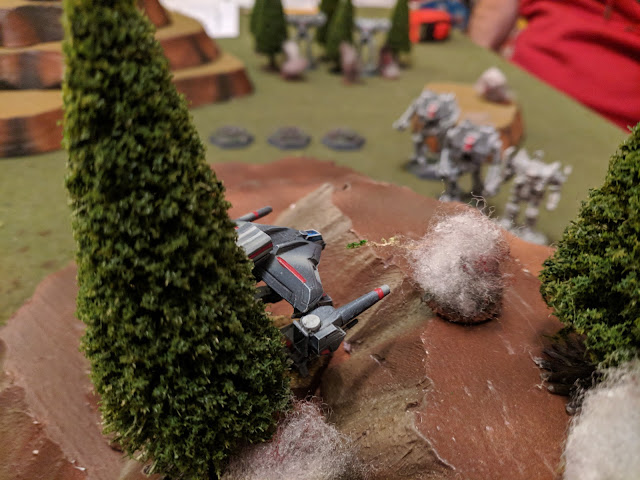 Between both clan mechs, the Awesome gets pummeled, but the assault mech's heavy armor can take the damage, despite engine hits. 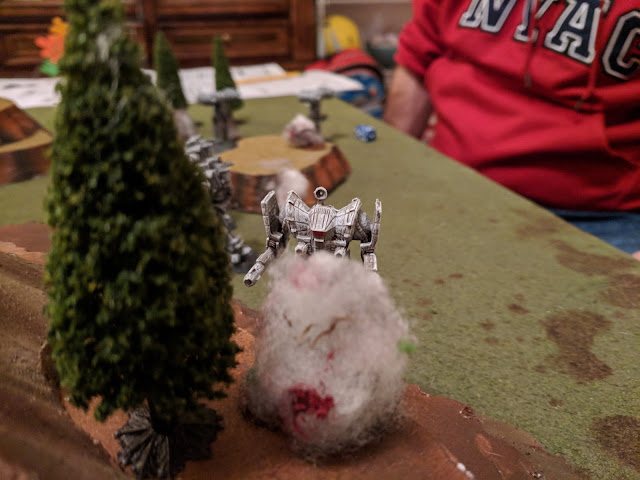 As the Bruin and Vulture tie up the Archers and Awesome, the MadCat completes its flanking arch, destroying one infantry platoon as it comes around behind the Longbows.  They turn to engage, but mostly fail to hit the fast moving mech, a difficult target even when it lacks forests and hills to hide behind. 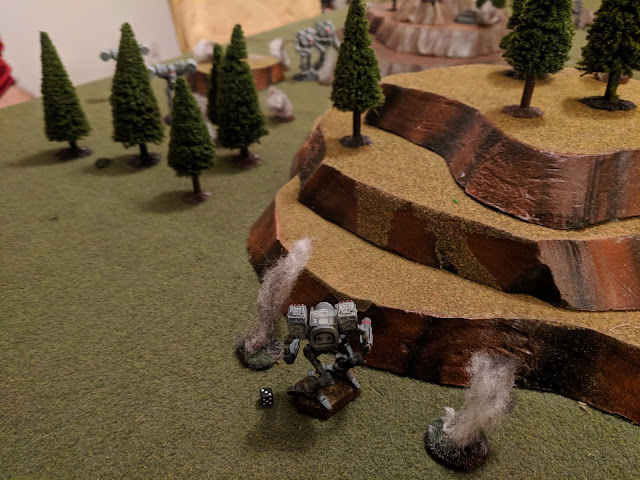 The Vulture pulls back, having lost it's entire left side to an ammo explosion, and the Bruin moves to intercept the Awesome. 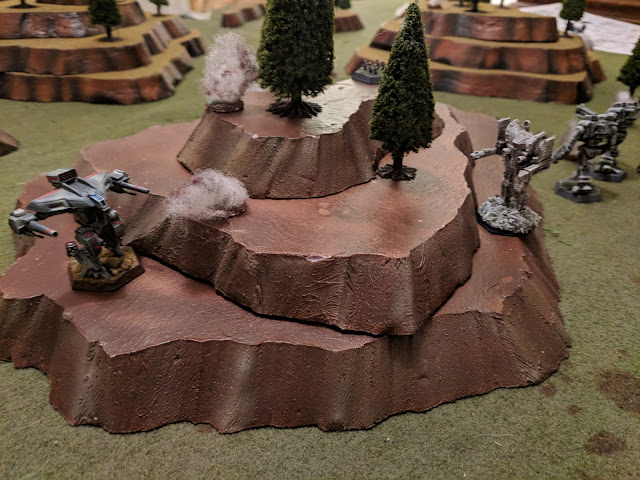 Its left side destroyed, it's right side mangled and exposed, and with no armor left on the center torso, the clan mechwarrior snipes from a distance. Unwilling to lose his mech, and equally unwilling to retreat in the face of an inferior enemy, the warrior hangs on, trying to continue to carefully contribute to the battle. 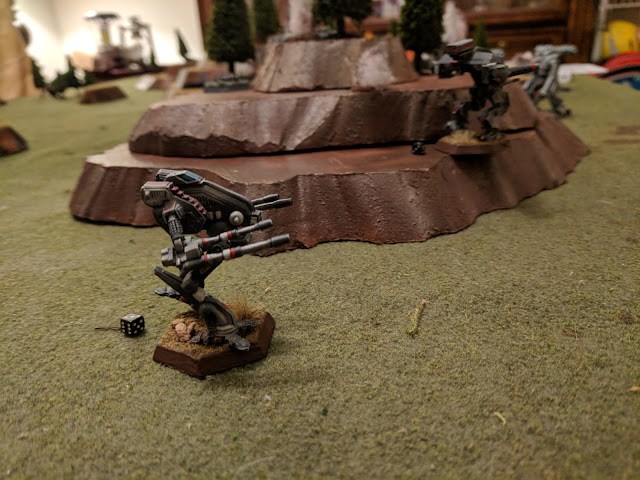 Finally, after a desperate effort to take out the Bruin, the awesome hits 30 heat and shuts down, leaving the LRM mechs unescorted. They move to finish off the Vulture, but the Bruin stands in their way. 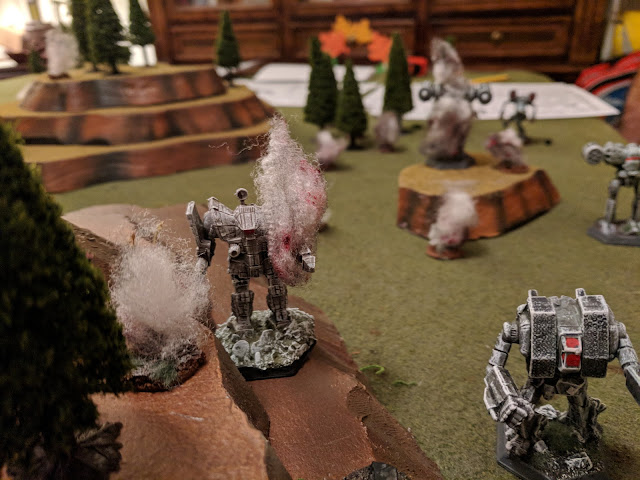 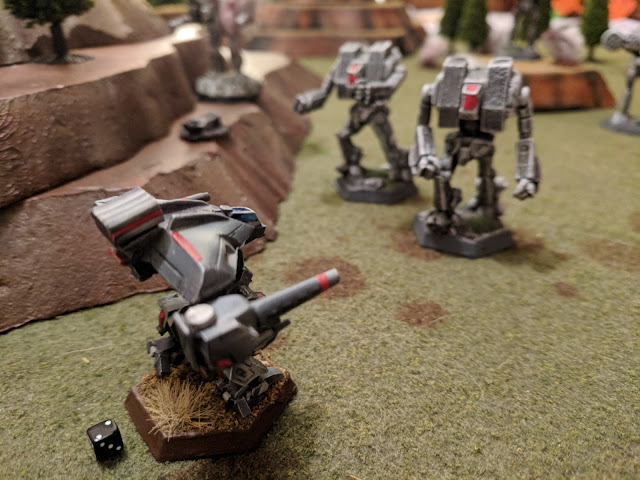 Meanwhile, the Madcat clears the forest, forcing the Longbows to deal with it alone. 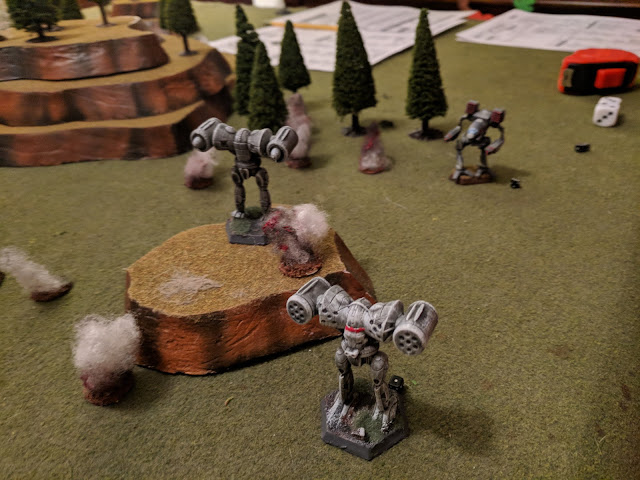 They don't last long against the far superior Clan mech. An ammo explosion does it for the first one. 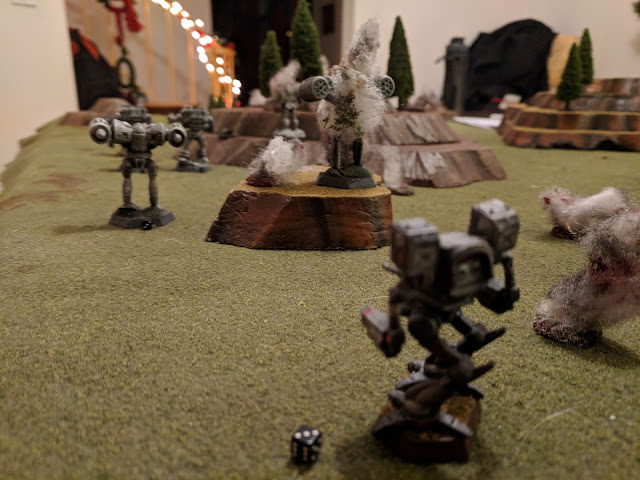 The Vulture, half its weapons gone, continues to snipe at the Archers. The mercenary jump infantry get close enough to fire at the heavily damaged mech. 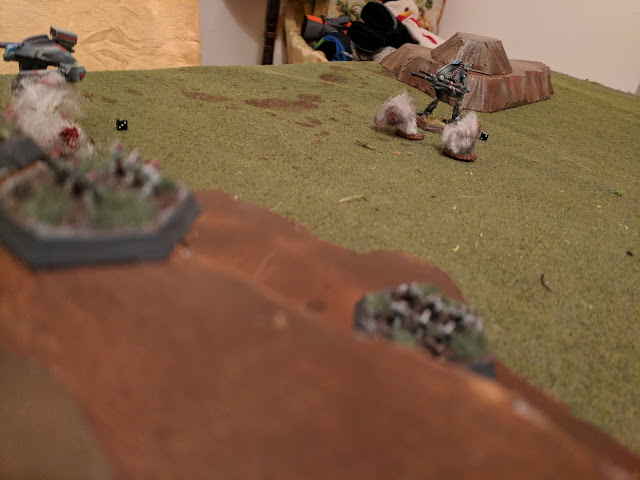 The Madcat doesn't slow, killing a Longbow each turn, rushing in under the LRM's minimum range. 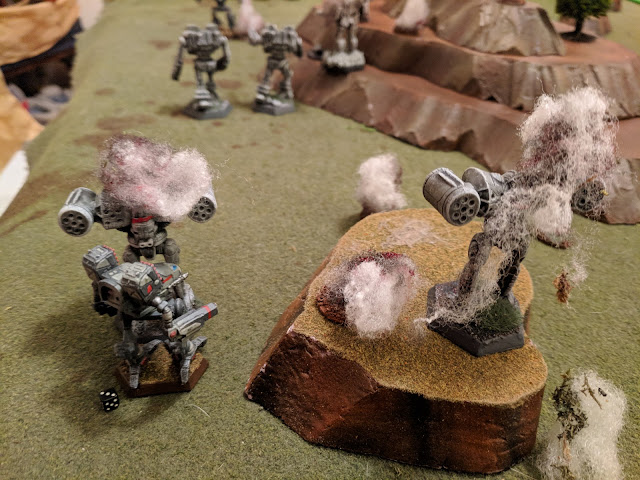 The Archers firing at point blank range, score two gyro hits on the Bruin.  Unwilling to eject and face dishonor, the pilot props himself up on one arm and continues to fire. 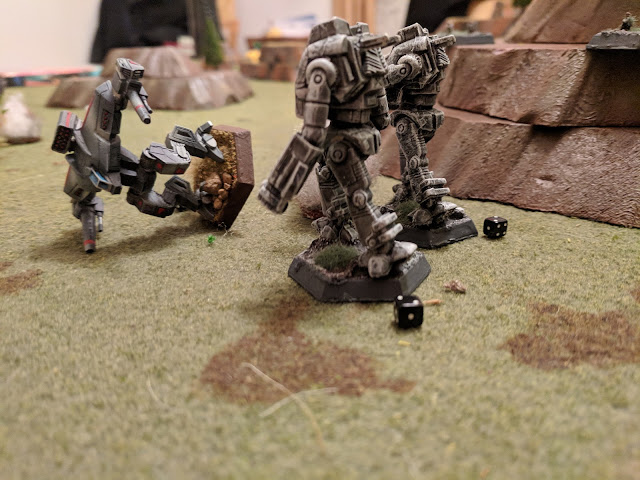 The Archers move into to try to kick the downed mech to death - the height of dishonor! 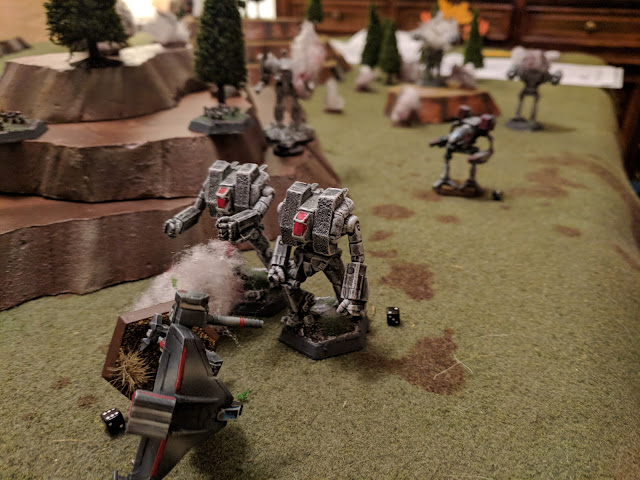 Facing such a dishonorable adversary, the Madcat, which until now has carefully kept to his clan's honor rules, opens fire into the rear of the Archers.  How dare they kick a downed mech! 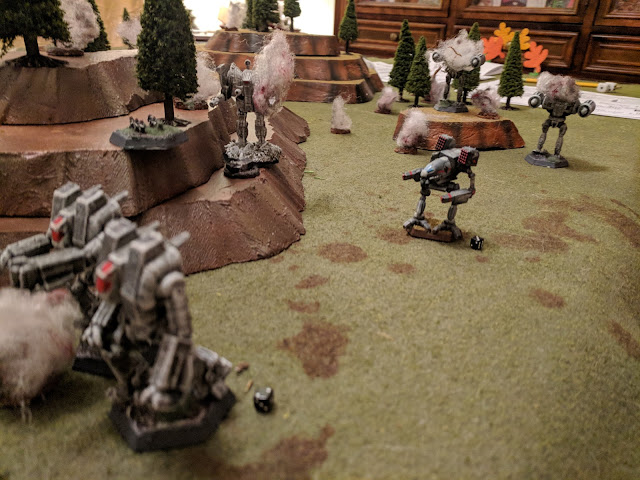 The Vulture moves back in to support the downed Bruin as well.  Perhaps a tactical mistake... 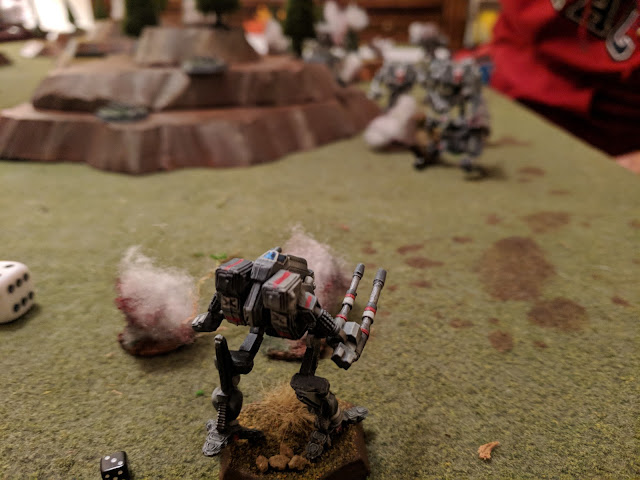 Finally, the Archers manage to score the final engine hit on the Bruin, shutting it down. The mechwarrior survives to fight another day however. 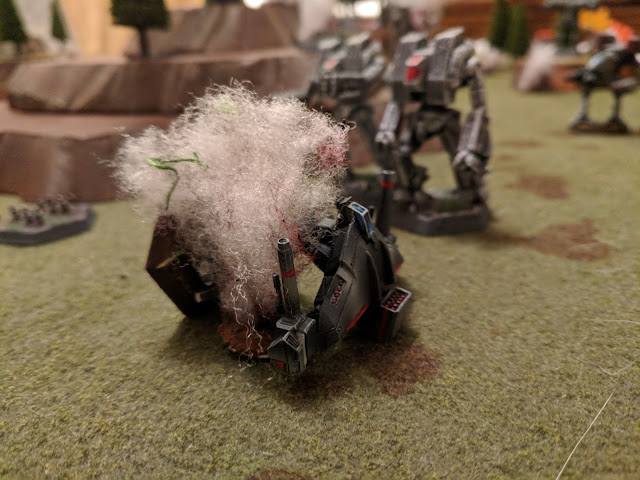 At the same time, the Vulture suffers a gyro hit, downing it as well.  The infantry, smelling blood, move towards it to swarm. 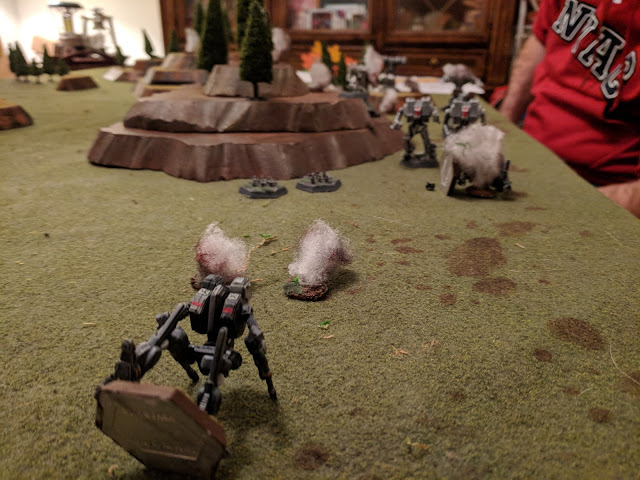 But the Madcat is still practically undamaged and rushes in to save the day.

"We cannot allow these freeborn scum a chance to salvage an Omnimech! Kill them all!  For Clan Smoke Jaguar!" 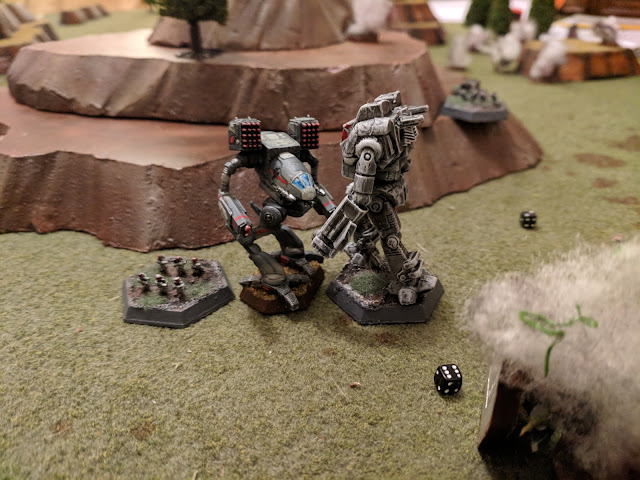 The vulture manages to stand to lend support.  The Awesome, restarted, retreats off the board as the Madcat finishes off the Archers easily. 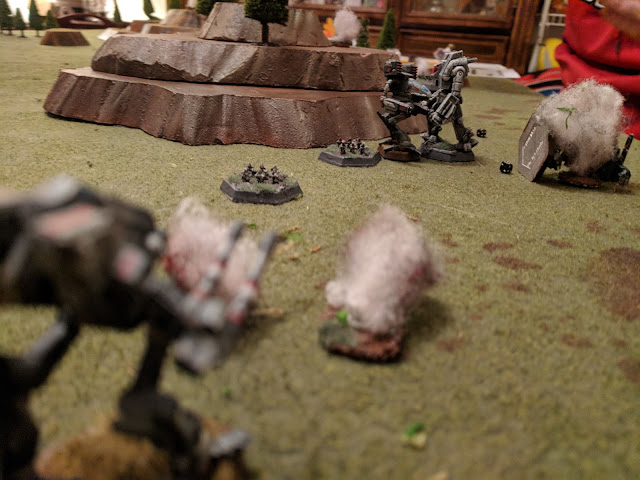 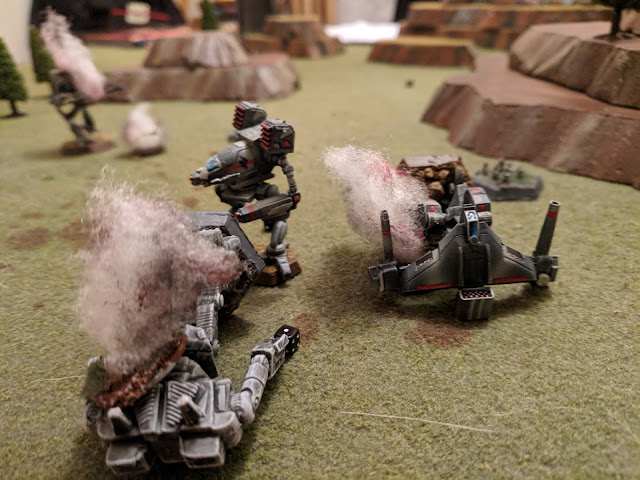 But as their mechs are destroyed, a lucky hit from the lowest of the low - freeborn conventional infantry - finishes off the Vulture's center torso.  While no Trueborn mechwarriors died today, it was an expensive battle for Smoke Jaguar. 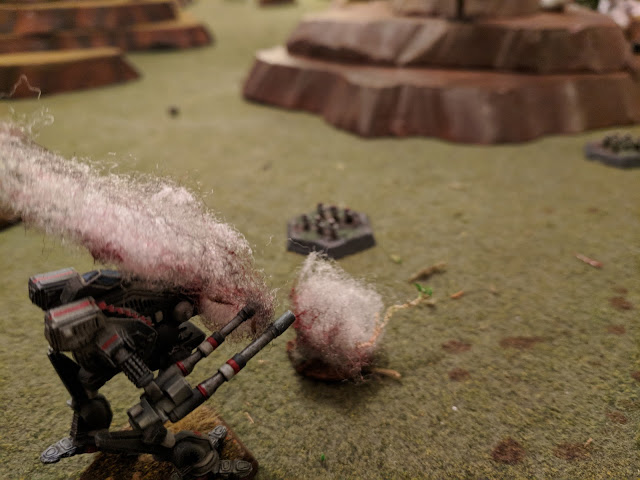 Only the heavily damaged Awesome managed to escape, and the mercenaries were denied any salvage. The Madcat, enraged over the dishonorable tactics of the enemy, surely did not let any of the infantry escape its machine guns.