Clan Smoke Jaguar vs. Clan Jade Falcon - at stake, the rights to invade a particularly valuable Inner Sphere world.  For Fritz and I, a chance to try out some new clan hardware, including this Carnivore Tank and assorted battle armor. 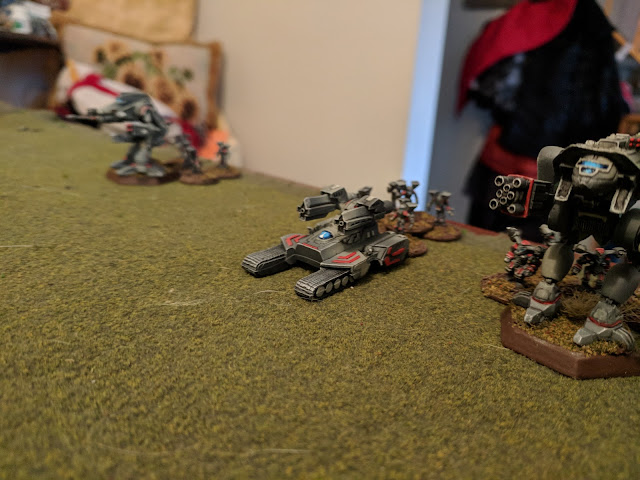 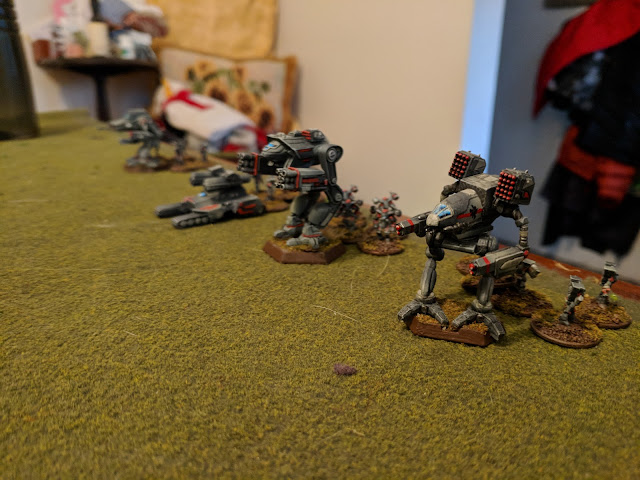 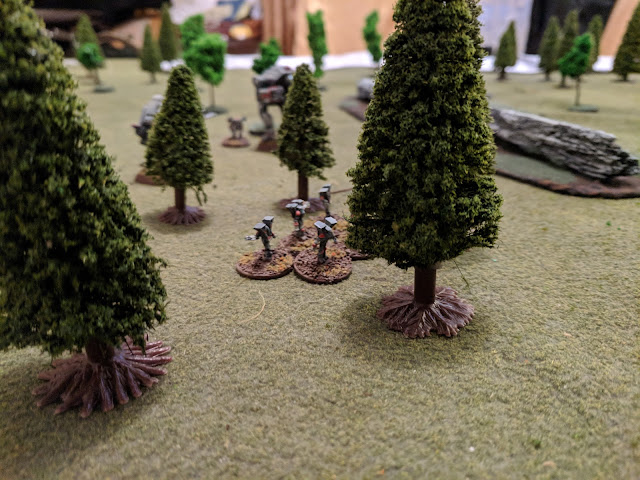 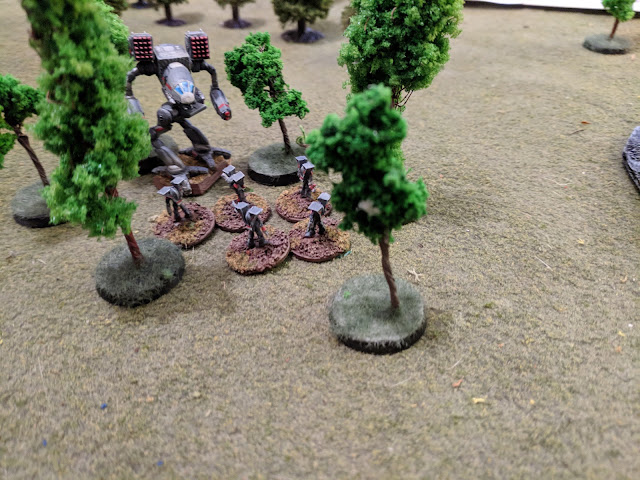 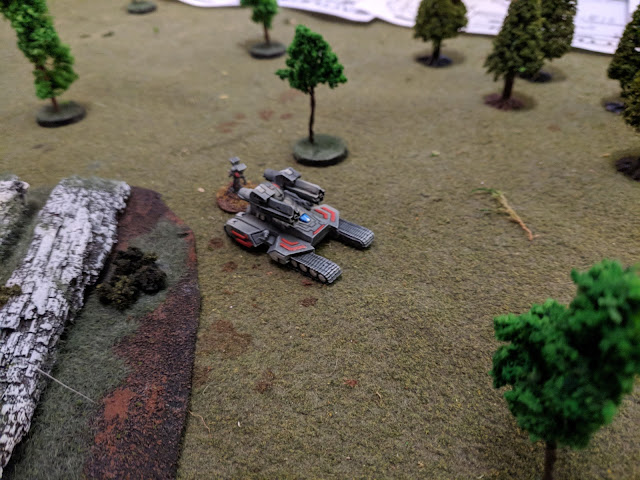 The enemy is sighted! Jade Falcon mechwarriors supported by Elementals. 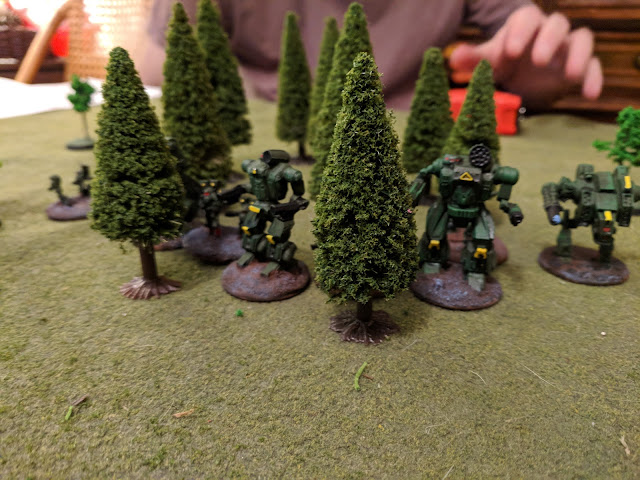 Long range shots mostly fail to connect as the Madcat tries to flank the concentrated enemy. 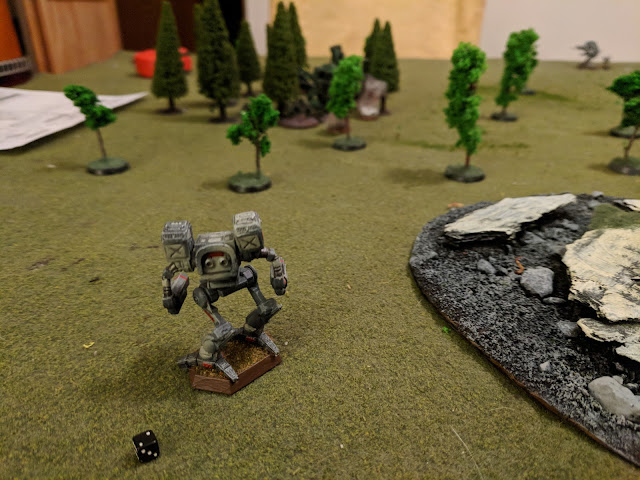 Relying on its heavy armor, the Carnivore leads the way, dropping battle armor into cover. 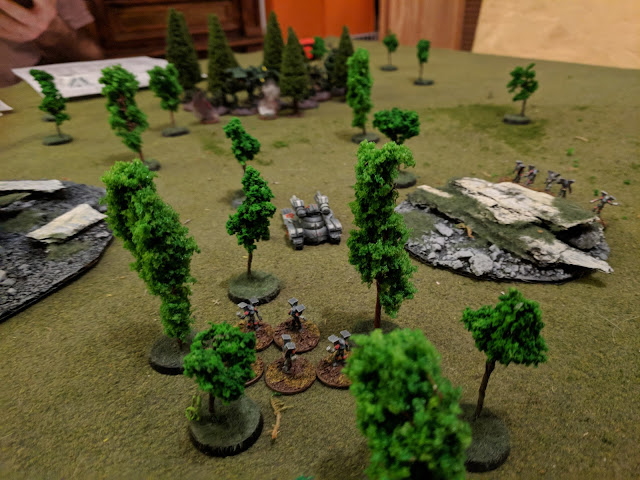 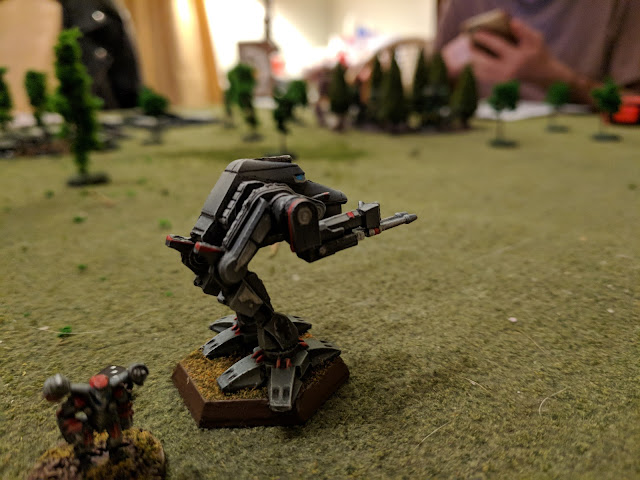 Meanwhile the Carnivore proves unlucky.  Damage concentrates almost exclusively on the left side, eventually wearing through the armor and knocking the tank out. Unfortunate!  I was counting on that tank to sit there for another round or two... 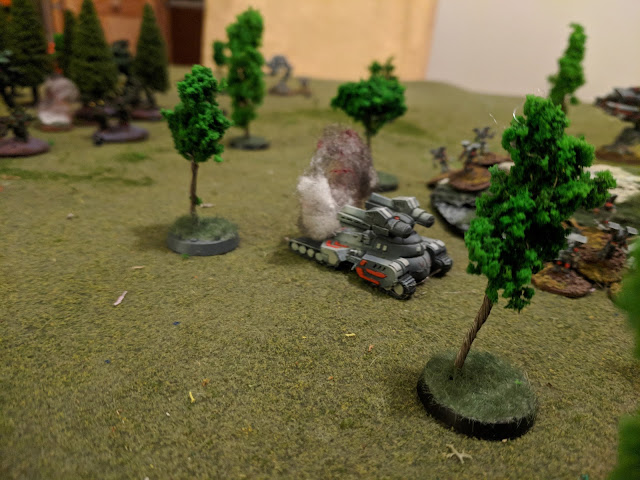 Meanwhile the Madcat gets into it.  Things get hot as the Falcons disregard Zellbrigen rules and go for back shots. 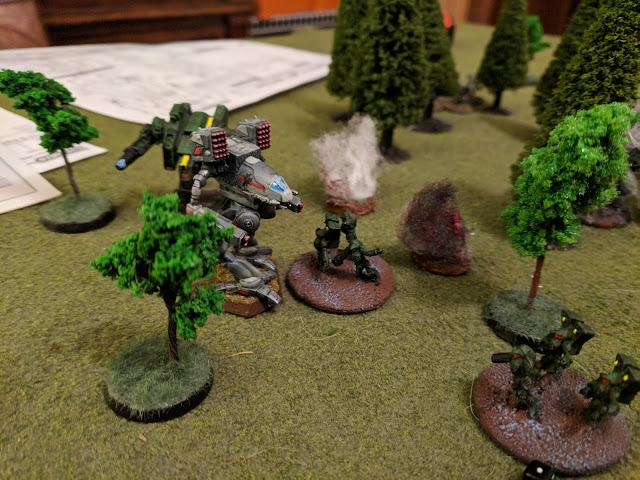 The Jade Falcon Warhawk takes a pounding but somehow hangs on... 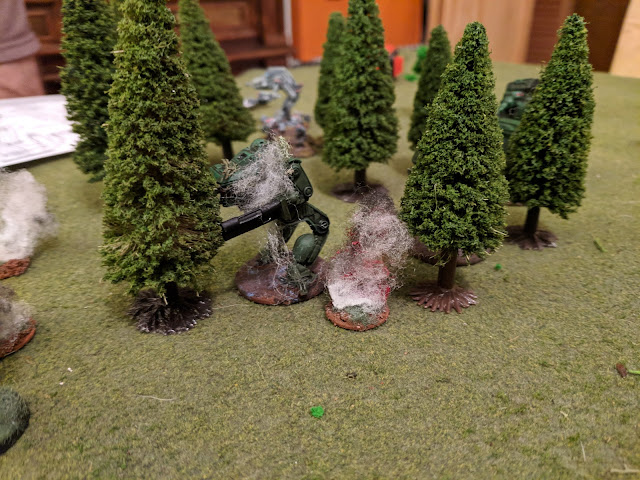 As the Jaguar's Daishi advances supported by Battle armor, it's forced to back off in the face of enemy Elementals it can't cope with on its own. 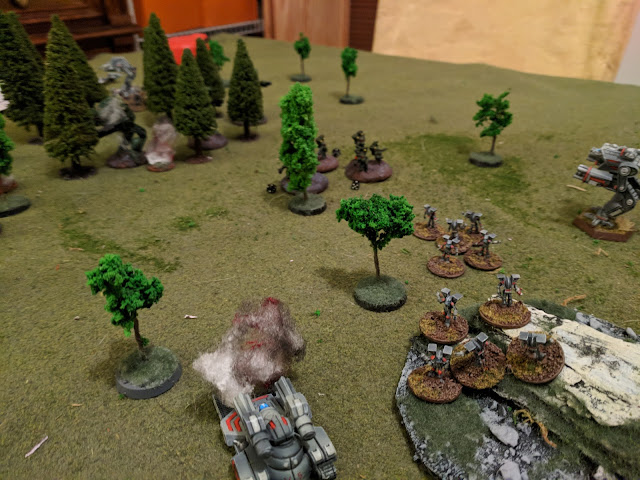 Meanwhile the Dragonfly makes its move, dropping its Salamander riders into the forest the enemy is using for cover. They immediately turn the whole forest into an inferno. 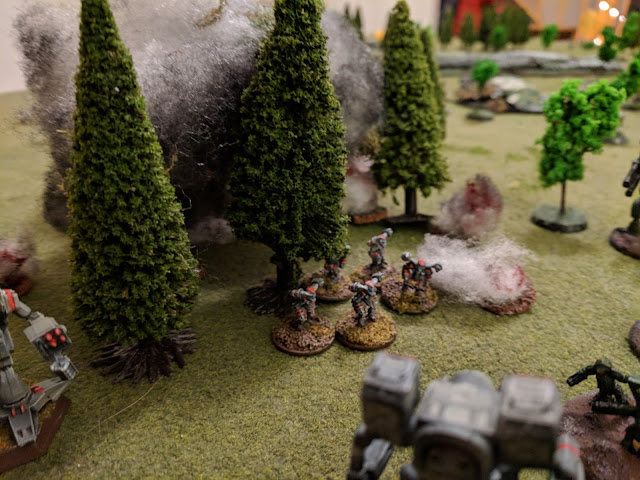 The Dragonfly tries in vain to keep the enemy off the Madcat. 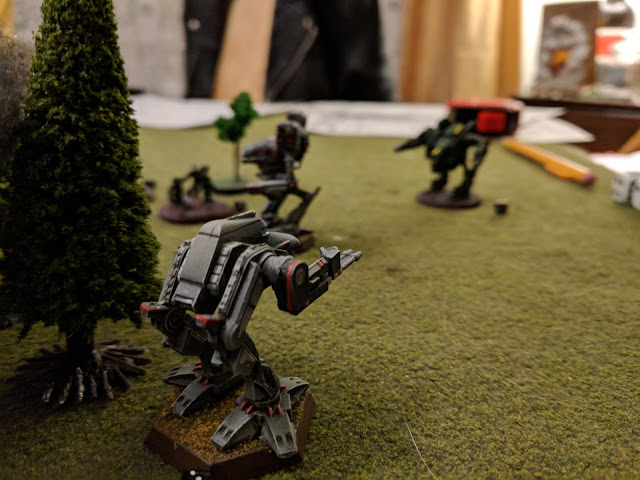 With the forest ablaze, the Salamanders turn their flamers on the two units of elementals, wiping them out. 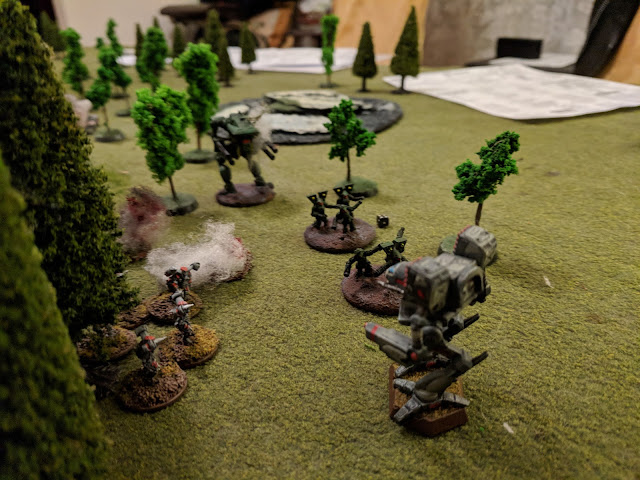 Meanwhile, the other elementals supporting the Daishi tear up the enemy trying to transverse the open plain. 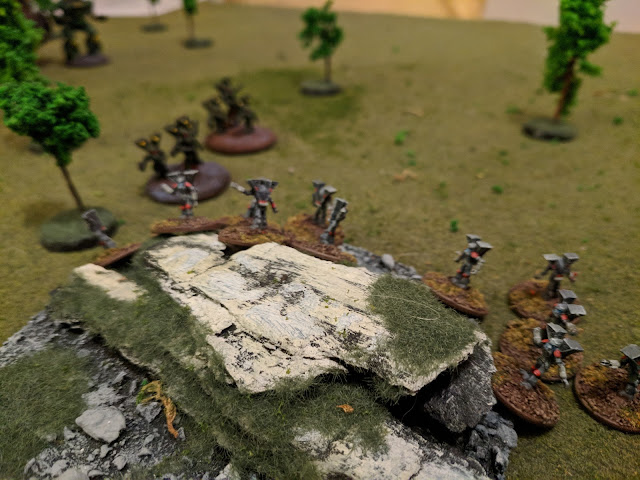 Damn that Daishi is pretty!  Some of my best work if I do say so myself... 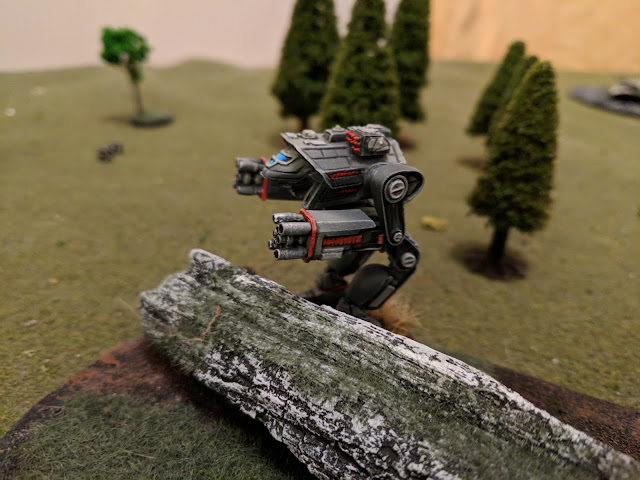 With this, the enemy Elementals are wiped out to a man. 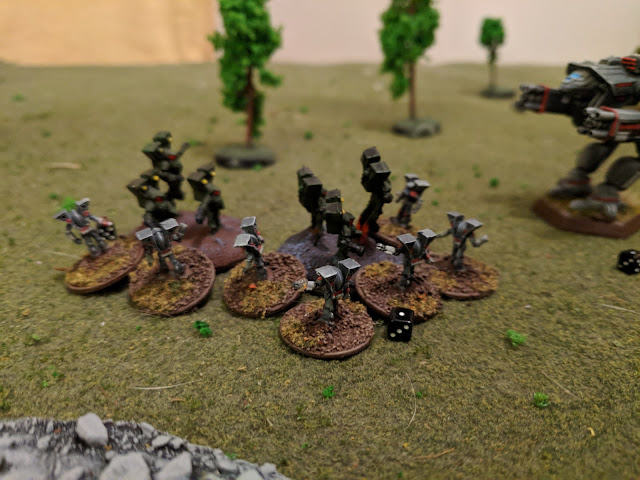 The enemy is finally falling before the Jaguar advance, but at some price. The Warhawk finally goes down in the face of the Madcat, but the Madcat isn't long for this world either. It's taken damage everywhere. 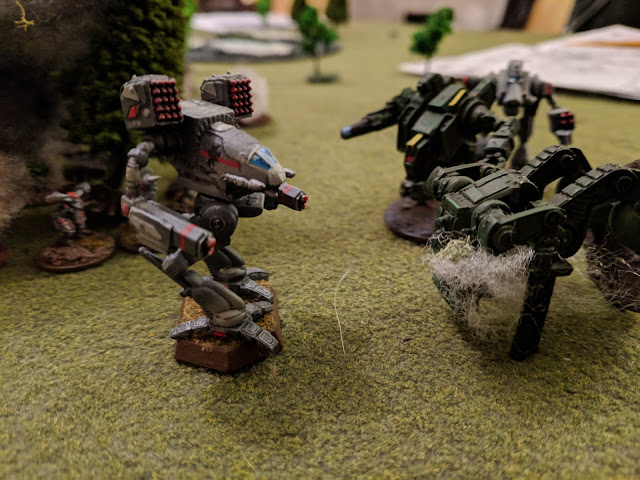 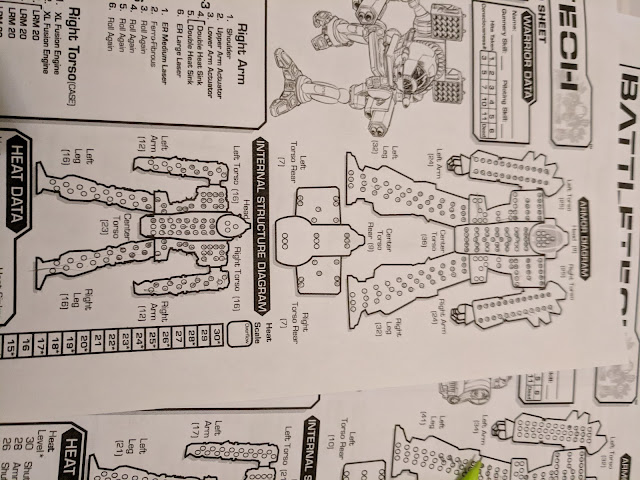 Finally, it's Gyros give out and it falls to the ground.  But dropping the mech isn't enough to save the Jade Falcons, which are forced to surrender in the face of the nearly undamaged Daishi with is now free to approach. The Jaguars have earned the right to take the offensive to the Inner Sphere!  Stay tuned to see how that goes. 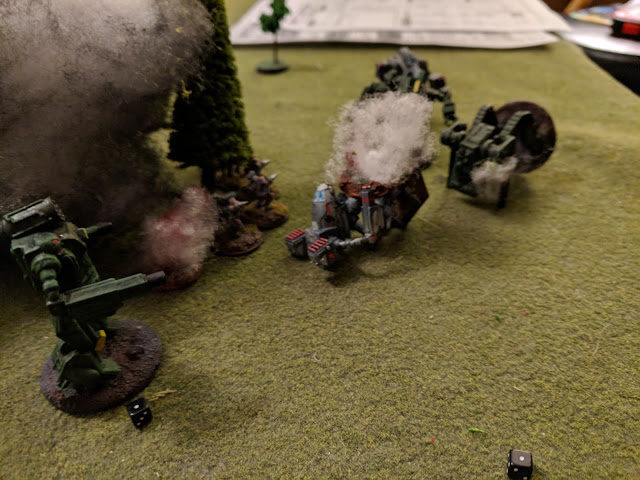