Apparently Dreadfleet is not a very popular game among GW fans. I don't understand it myself. I mean, sure, it's not a hardcore wargame, but it's wicked fun. Like Pirates of the Caribbean with Dwarven Ironclads and whatnot.  And the models are just gorgeous!

Here's a capture the treasure scenario in action. 5 treasure tokens are slowly drifting towards the left side of the board, and both myself and my opponent (Fritz), are racing to catch them before they get off the board. Since I play the good guys with Brian, I'll play the bad guys with Fritz. 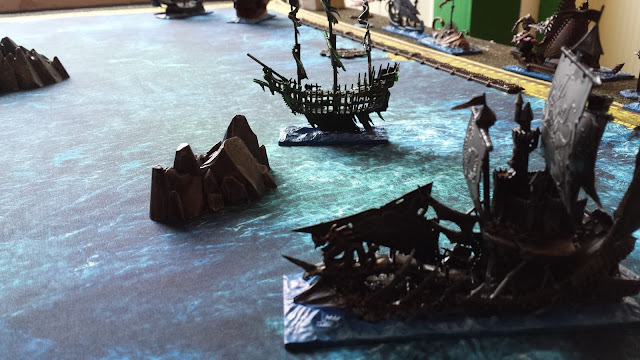 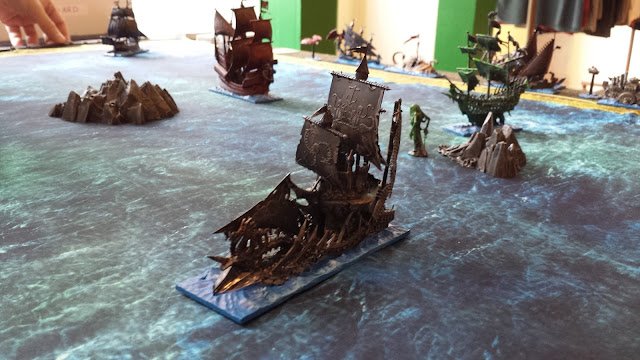 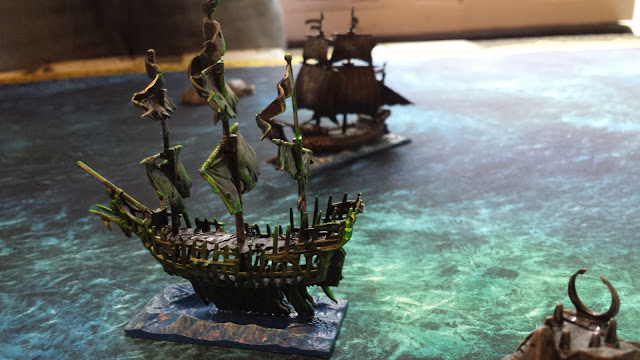 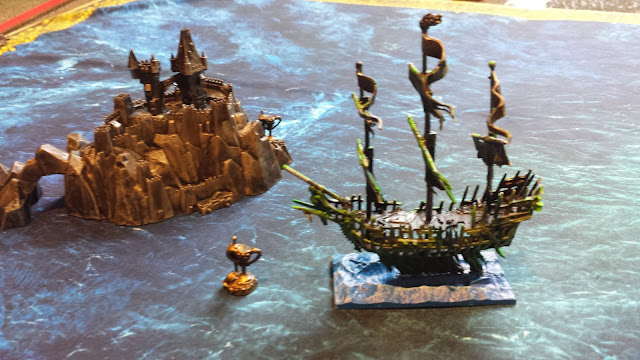 One of the things people don't like about this game is the randomness. Like the randomness of a "Sea Giant" rising up out of the deep to wreck havoc on the fleets. Personally, I am amused by it. 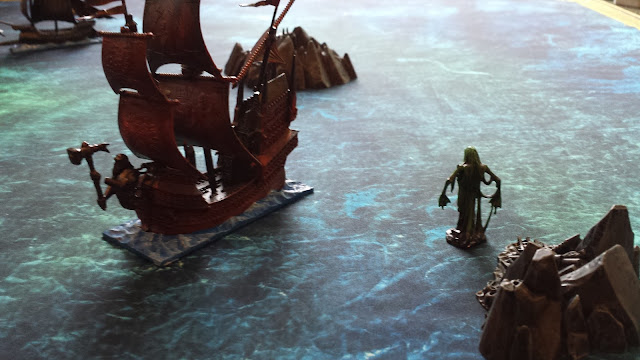 And then a Sea Leech... or something like that. Basically a dead sea dragon animated by parasitic worms. Yummy! 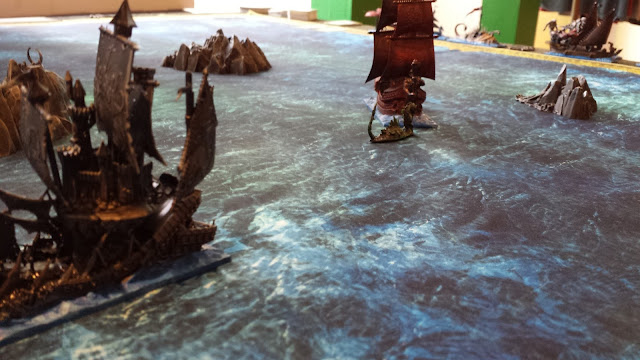 One of the objectives slides off the table, but the others get caught on rocks. It's a race to snatch them up first. 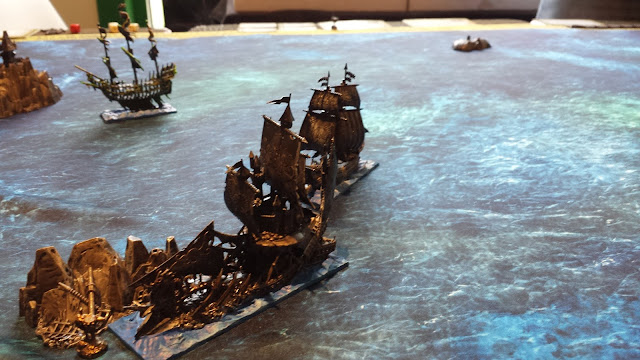 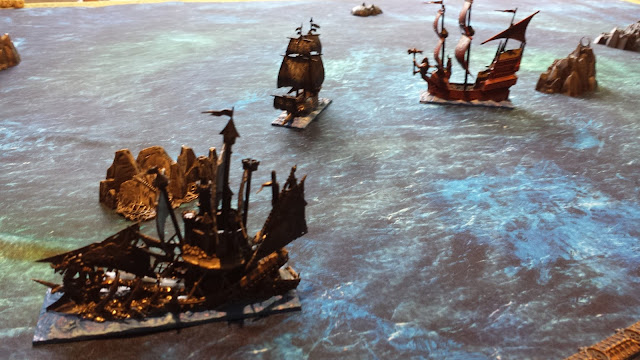 Near the end, I have 2, Fritz has 1 and 1 is off the table. The last objective is on the other side of this rock.  Thankfully I have a ship that can sometimes fly. It wins me the game. 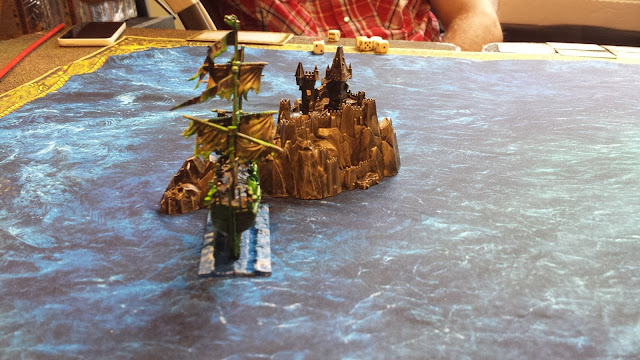 We reset with new forces. Including an Egyptian style ship that shoots heat rays, and a dark Dwarf U-Boat with tentacles. This game we have 4 rounds to do as much damage as possible. Whoever has the least damage cards wins. 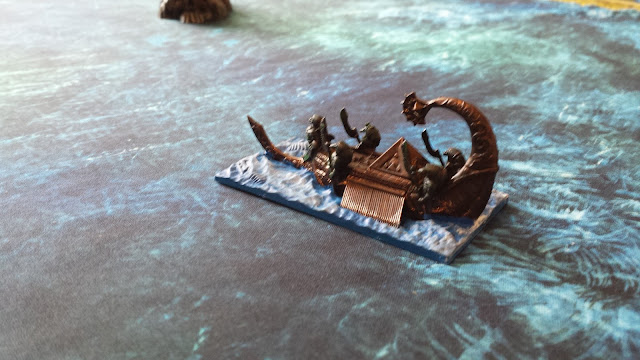 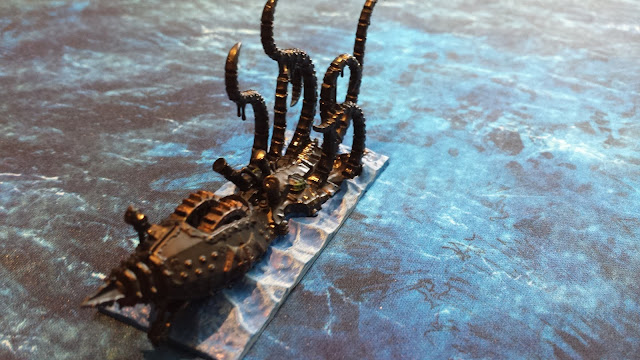 Almost immediately, two ships come into assault - the Egyptian ship, and Fritz's Dwarven Ironclad. The Egyptian Pharaoh-Captain cuts down his adversary quickly, but his crew is being slaughtered by the dwarves. 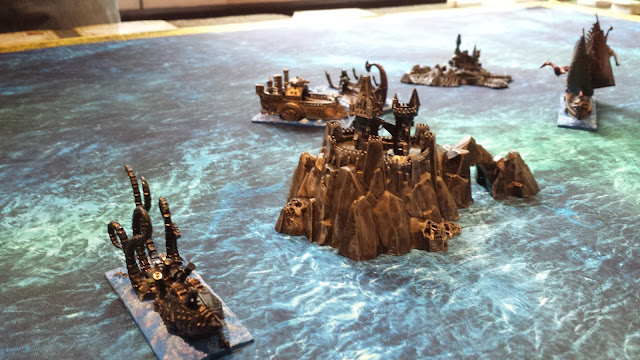 The U-Boat rises out of the deep and joins the fray! 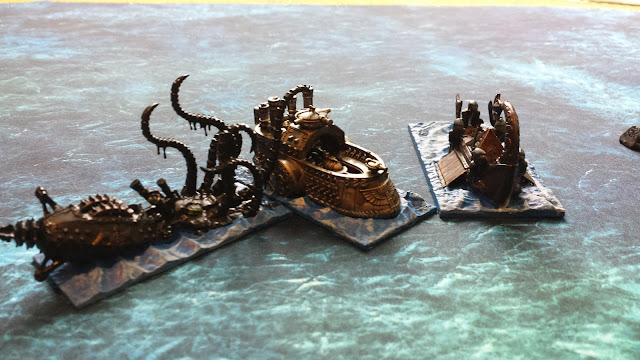 And so does the Jinn-powered sailing ship controlled by Fritz!  All four ships are now locked together in mortal combat. And there they stay until the end. We count up damage cards - an exact tie!  A very fun draw. 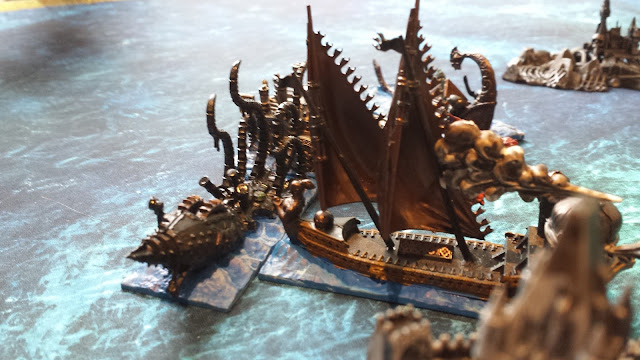 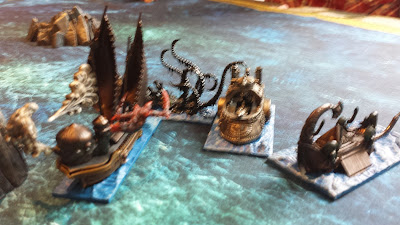