The Moroccans Have Landed

Of all the troops available to the Nationalists, the Moroccan Regulares were perhaps the most feared. Many were veterans of the Riff war (fighting both for and against Spain), and most fought primarily for the relatively good pay which they sent home to their families. Despite being not much more than mercenaries, their experience, calm under fire, and apparent fearlessness, combined with their lack of a moral objection to horrific acts after a battle, meant that they were among Franco's elite shock troops throughout the war. 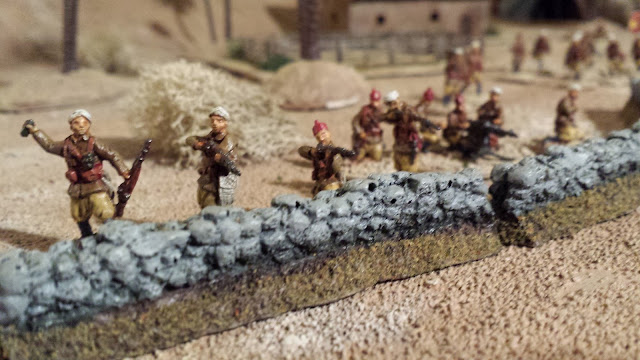 These are all from the Minairons line, which I am a big fan of in general. However, these may be the best in terms of detail, in my opinion.  I apologize for the shine in these photographs - I was playing with lighting and it made them shinier than they appear in person. 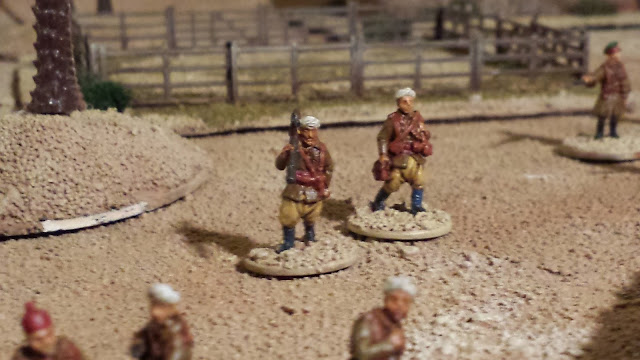 I picked up 2 boxes of regulares, and 1 HQ and weapons which contains exactly enough for a single platoon and some support (MMG on a tripod and a mortar team). 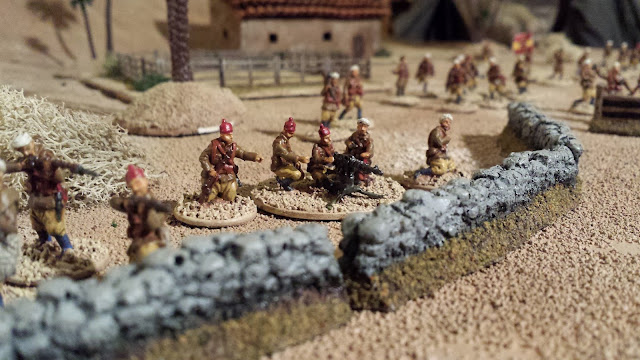 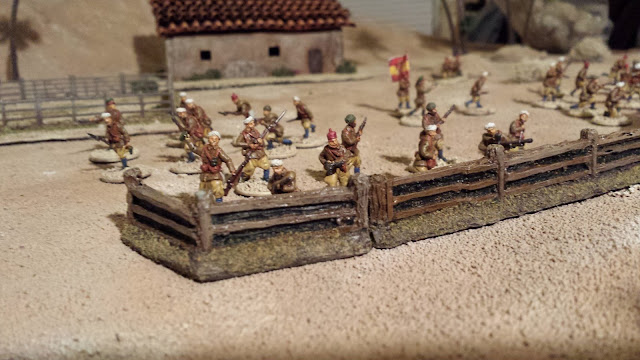 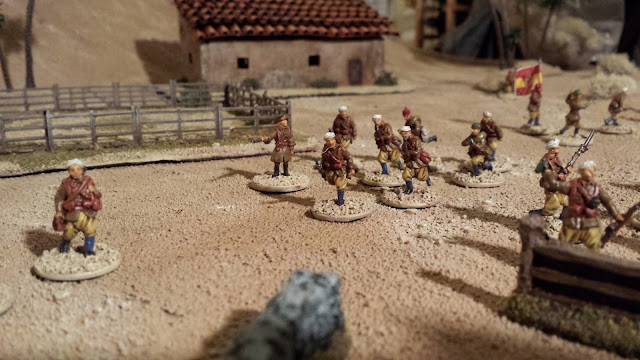 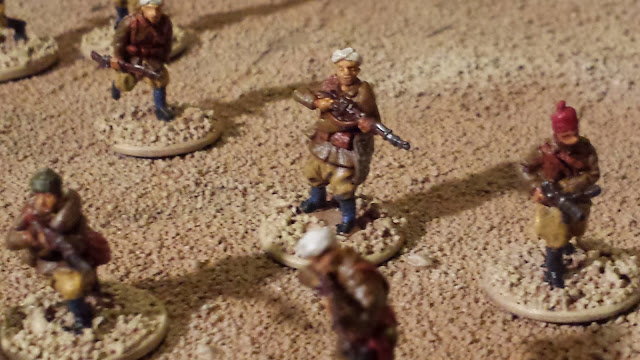 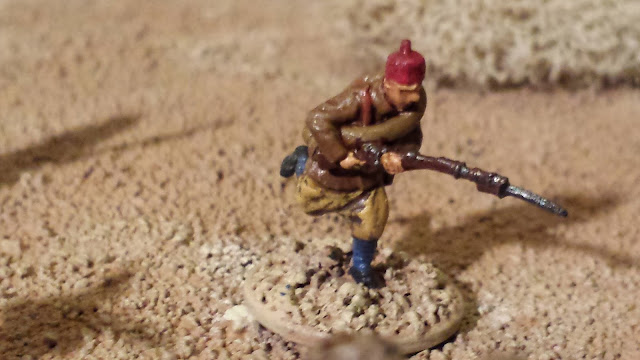 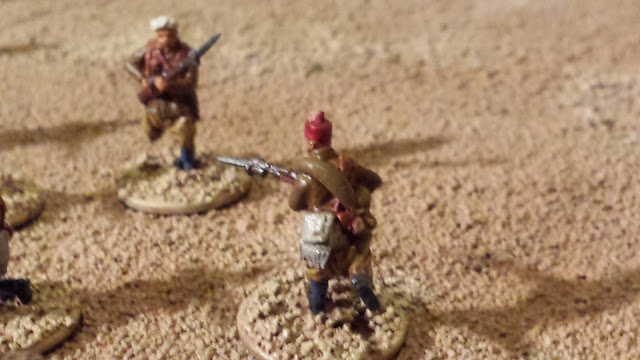 I must admit that I was puzzled by the mortar - it looks very different than any mortar I've seen (not that I'm an expert) and I really didn't know what it was when I opened the box. I had to look at the manufacturer's pictures on their website in order to figure it out. Came out alright anyway. 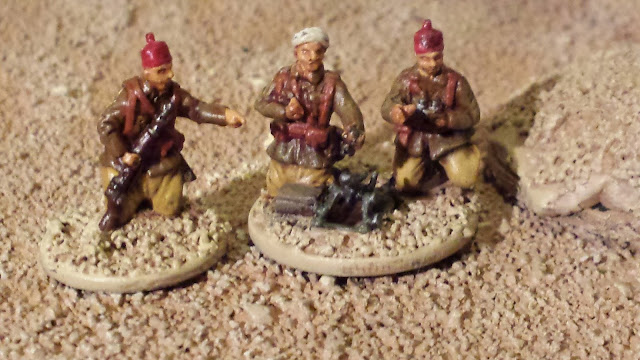 I love the headgear on these figures, and the loose pants were a joy to paint.  The officers also look very sharp. 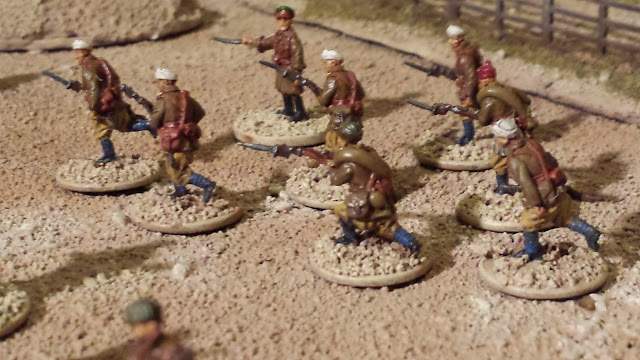 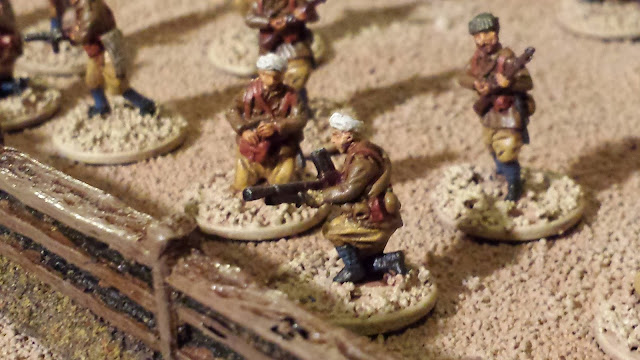 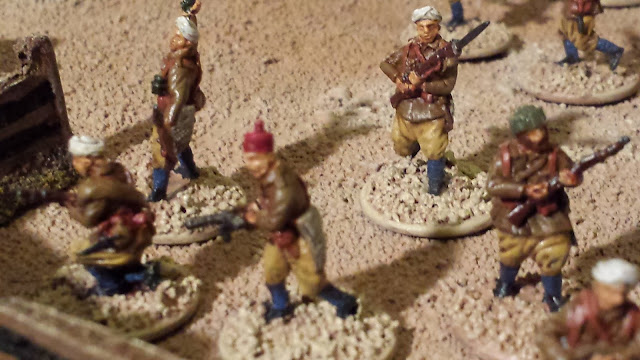 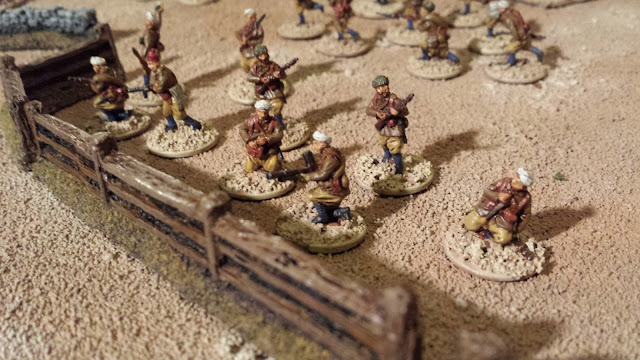 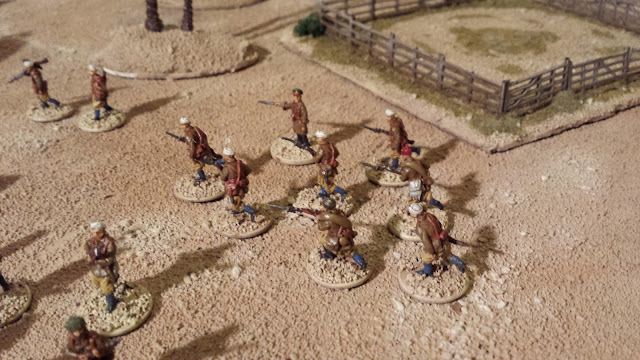 The other LMG team, feeling a bit casual. 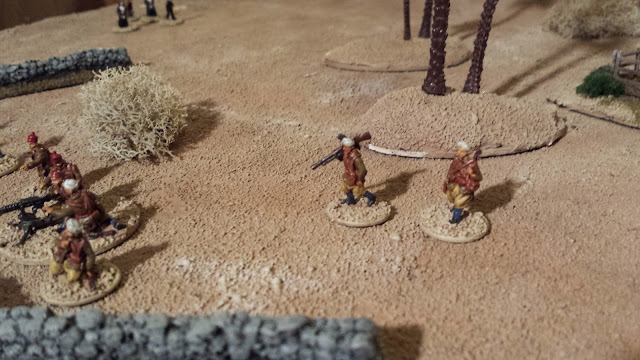 The same team from the rear - I love all the bags that the loader is carrying, with Cris-crossing straps. Great detail. 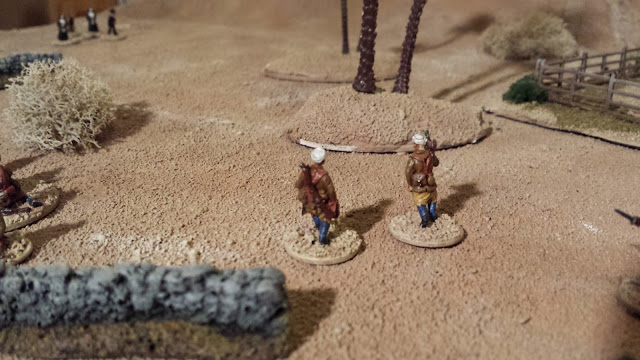 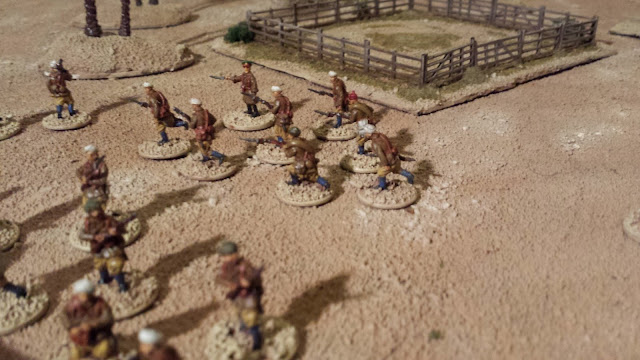 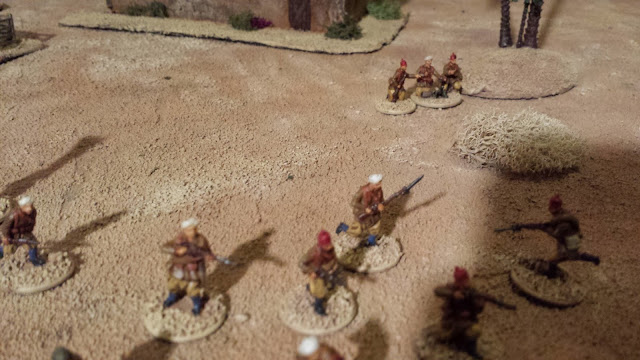 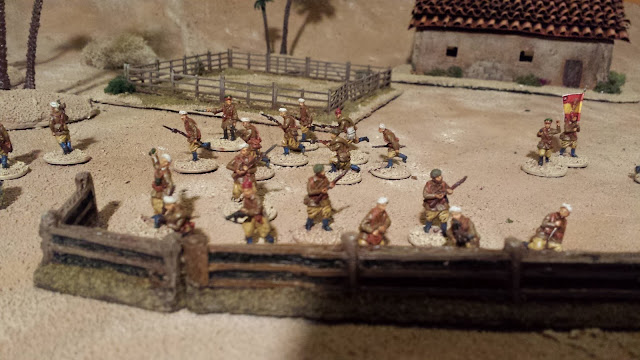 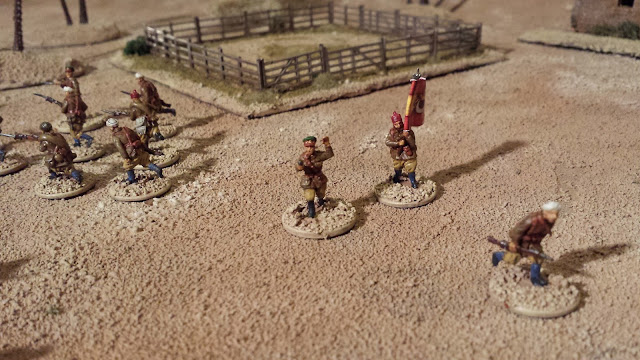 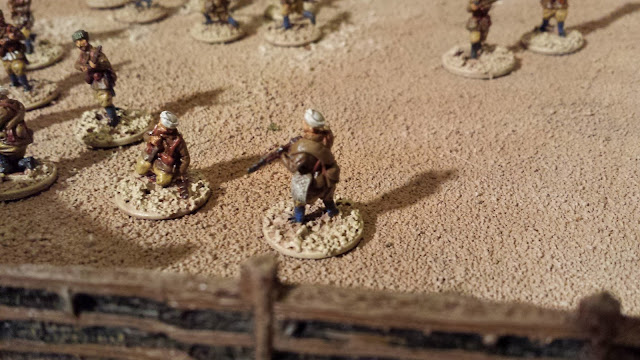 If I have one complaint it is on the flag-bearer. The pole, which is beautifully topped with a crescent, is unfortunately too short to accommodate the size of the flag provided. I trimmed the flag as much as it is possible to do without cutting into detail, but it is still a bit awkward. A minor issue to be sure, and the only trimming necessary (there was, as usual with Minairons, essentially no flash or filing necessary). 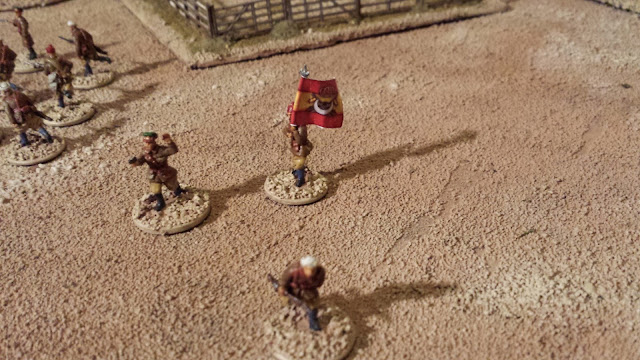 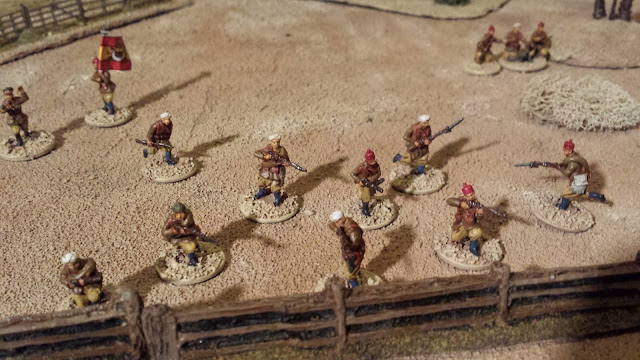 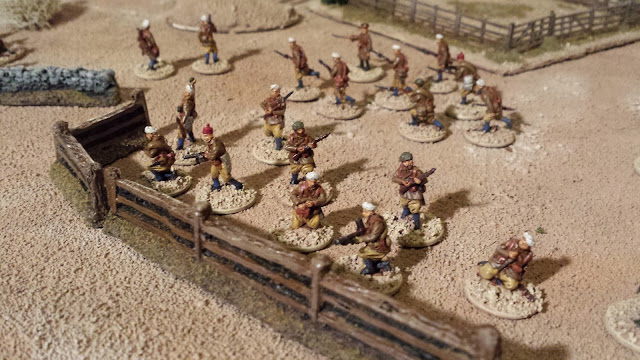 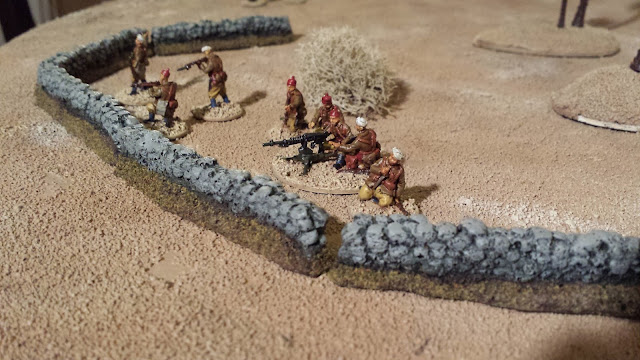 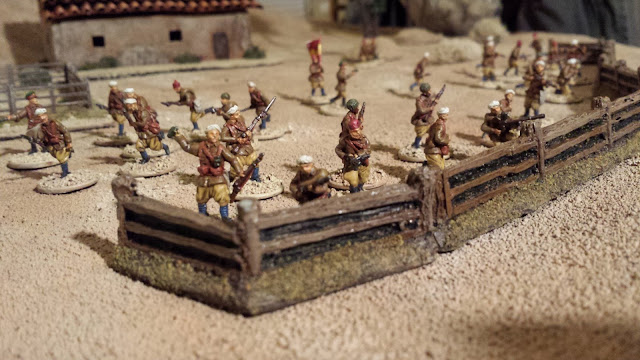 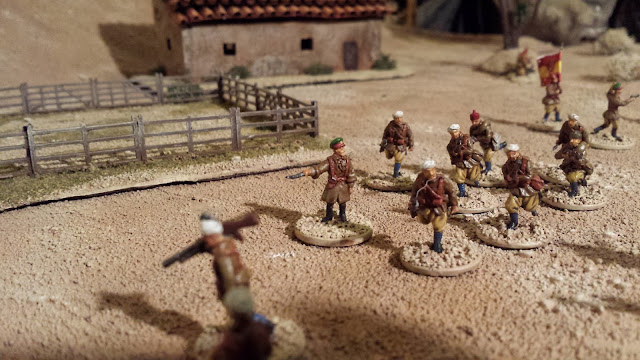 I also finished painting up the local clergy.  Odd that Muslims should defend the Catholic church, but this was a strange war. I'm told the Nationalist propaganda had it that the Reds were going to ban Islam. Anyway, these nuns and the priest will be playing an important roll in my upcoming Chain of Command scenario. 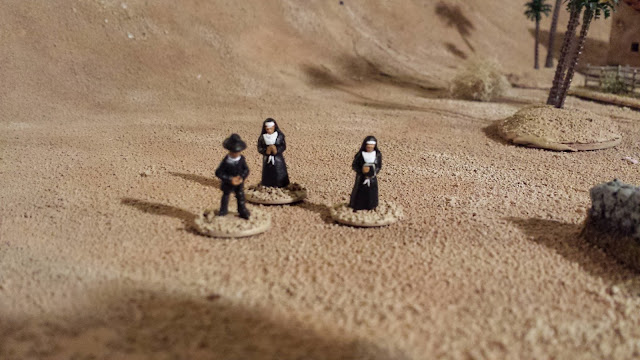