In preparation for the fourth table in my current Quinto campaign, a fight over the a piece of the town itself, I knew I needed a lot more buildings. In fact, even after this project, I'm feeling like I should have/could have made more. But this is certainly a step in the right direction. Towns in Spain grew up organically over centuries (at least), and the buildings are often clustered quite closely together. Thankfully Quinto is not as dense as other towns, and there are plenty of walled yards and ruins to help me spread my few buildings out. If you want more details on Spanish towns, check out this post in Arlequin's excellent blog.

I decided to make a town complex of several buildings around a central courtyard. I knew I wanted access to any part that there might be a window, more than one entrance, and plenty to fight over. While working, I did a quick and dirty second building, and now I wish I'd made two or three extra. Oh well... 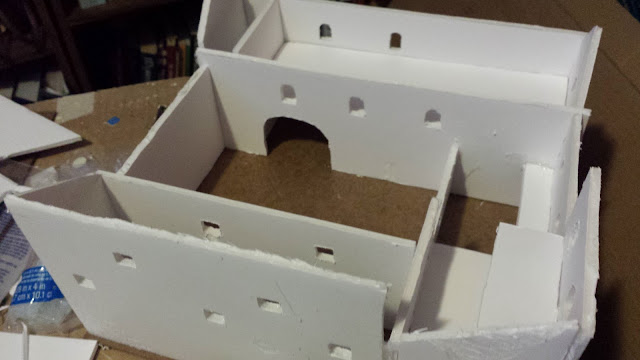 Everything is made of foam board, joined with hot glue. Compared to most other buildings I've made for this project, the complex was pretty fiddly. Fitting together the roofs, making interior floors and ledges, and a removable wall, all were challenging for someone who sucks at measuring. 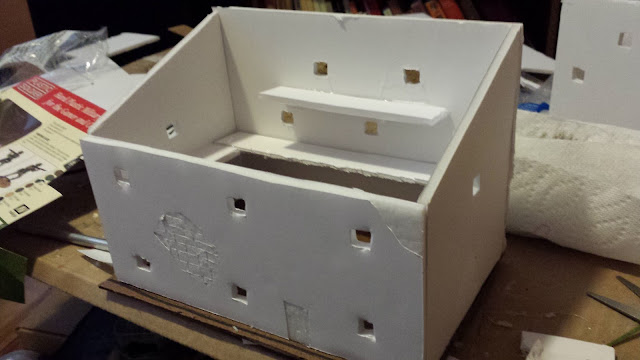 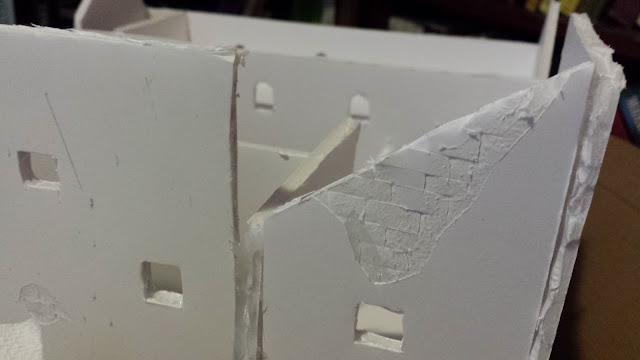 The usual details were carved in with an x-acto knife, after carefully peeling off the paper coating of the foam board. 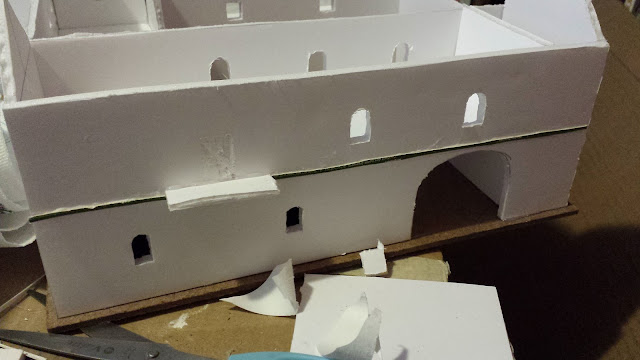 At what amounted to the last moment, I decided to add a balcony. Balconies are everywhere in these old towns, but mine will have to be happy with just one. 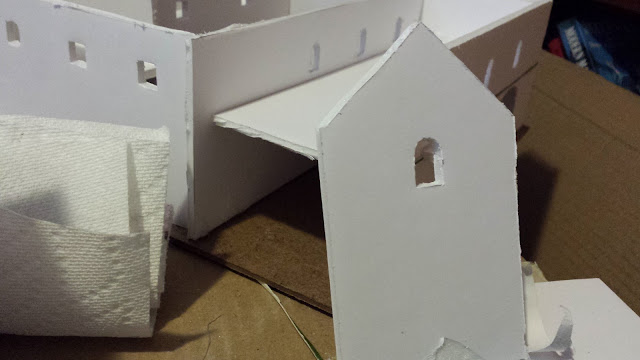 The removable wall. It allows me to slide figures into the bottom floor of the larger building while keeping the second floor immobile. 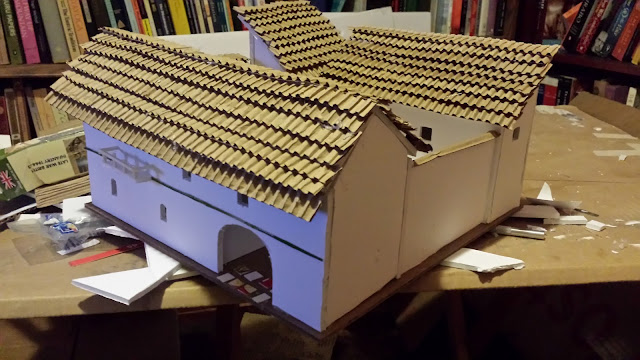 Roofing! It's not hard to make these (slightly oversized) "Spanish tiles".  They're just half of the corrugated card inside regular shipping cardboard (soaking it in the rain to separate it), cut into strips and attached, overlapping, to a piece of foam board with hot glue. 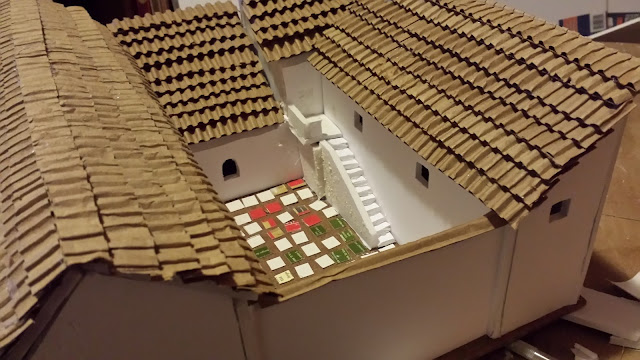 Some small sticks cut down crudely with the knife become the railing for the balcony. Not terrible for being completely unplanned.  Sadly, to make it large enough to put a figure with a penny-sized base would have made it look very odd. Spanish balconies are very shallow typically. 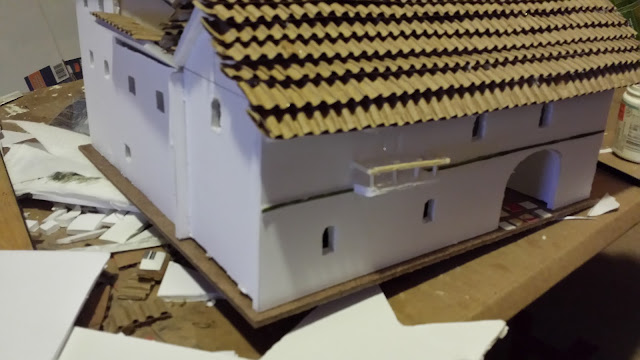 The removable wall was attached to the removable roof on the largest building so that the whole thing lifts up. This roof required the most work obviously, but not just because of the wall. The pitched roof (as opposed to the single slanted roofs for the rest) required triangular pieces of foam board underneath to keep everything in place and fit on top of the walls. This involved way more measuring than I typically like to do. 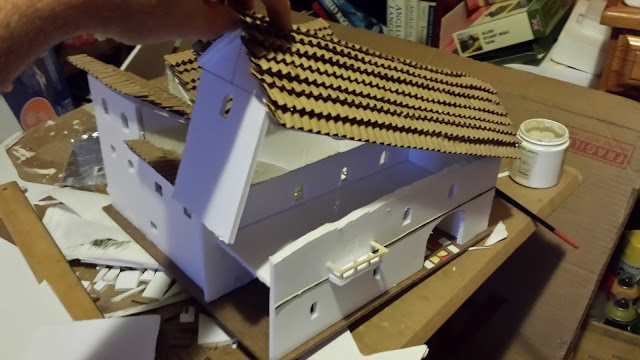 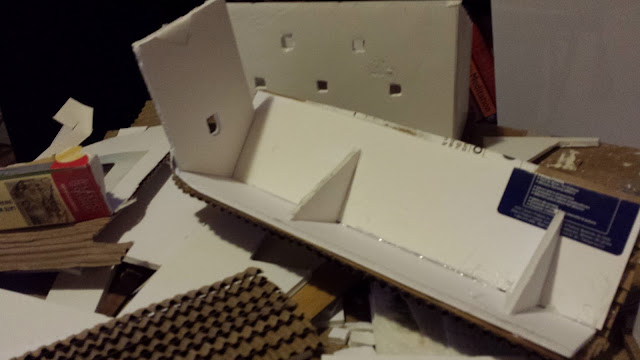 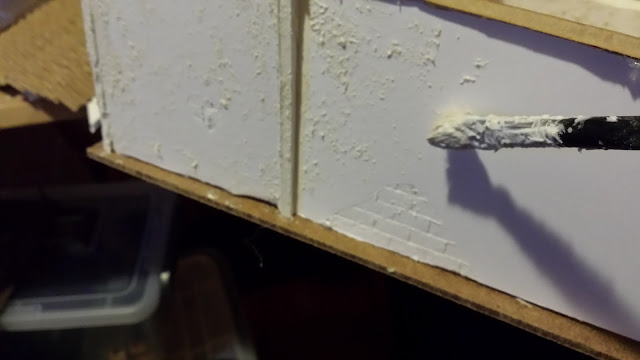 Then the application of my secret weapon: Martha Stewart Stucco Effect. 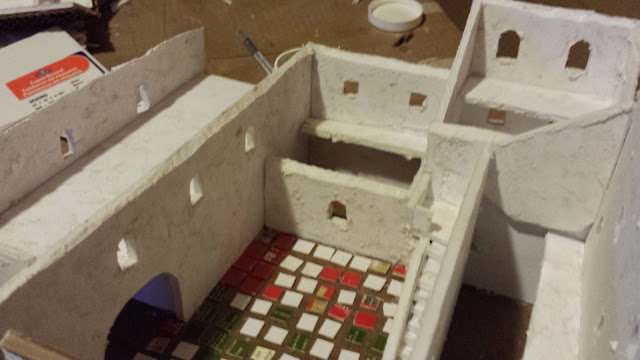 The interior courtyard after stucco application and glued down "tiles" of cardstock for the courtyard. 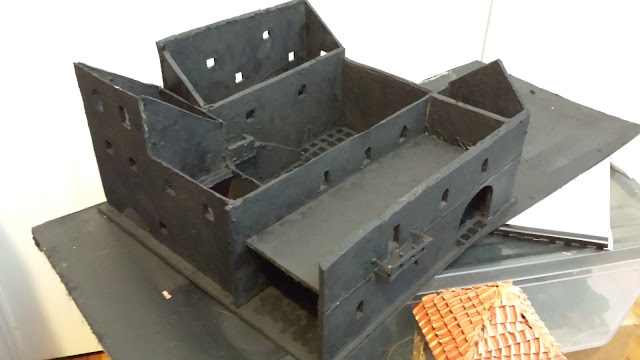 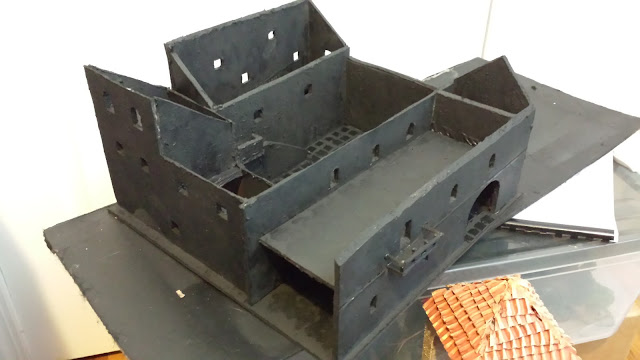 Here it is primed. Some of the interiors are primed brown in their depths, as I knew I wouldn't be able to get a brush into all the nooks and crannies. 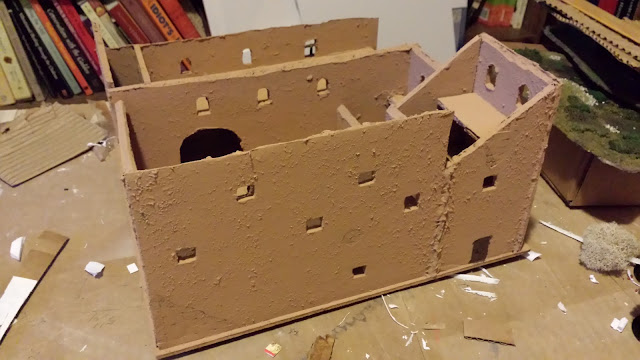 Base coat with cheap craft paint. The paints used are the same as all of my Spanish buildings, for uniformity. While it is true that buildings are rarely uniform in Spain, even in color, Quinto is far more uniform in its older buildings, and besides, it really ties the table together. 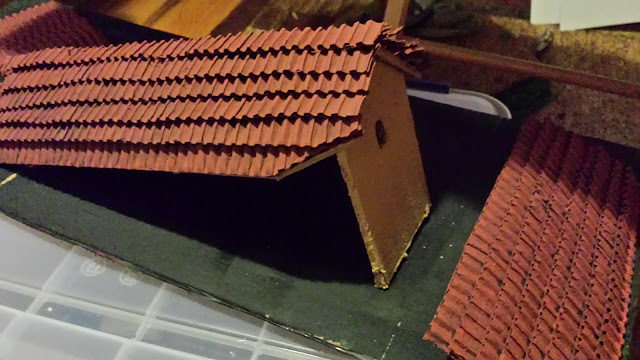 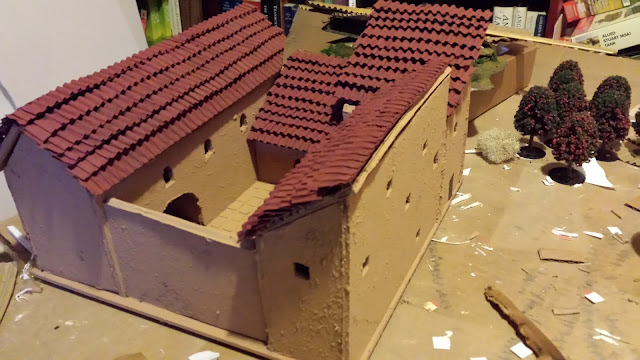 As usual, I then applied a heavy coat of Sepia wash. This time I tried Citadel's Sepia wash, which was very nice. However even with the larger bottle sized recently released, I went through nearly two full bottles on just these buildings. After it dried, it was time for my usual four color drybrush. Three colors is the minimum I'll use, as any less than that doesn't create the same illusion of texture and depth. I use all cheap craft paint: Craftsmart Golden Brown for the base and first drybrush coat, Americana brand Fawn, then Desert Sand, followed up by a very light application of Wicker White for the edges and details. 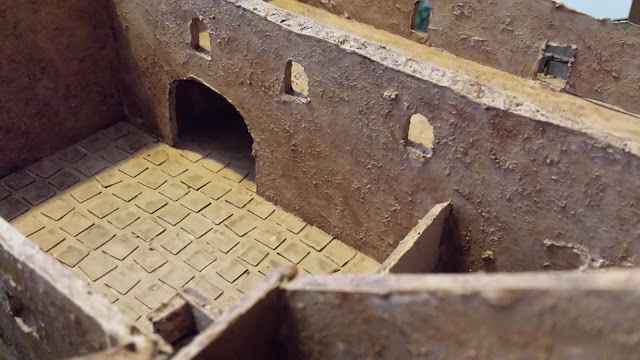 The final pieces: The complex is intended to be usable for a number of purposes. It can be a country farm house, a monastery, etc. 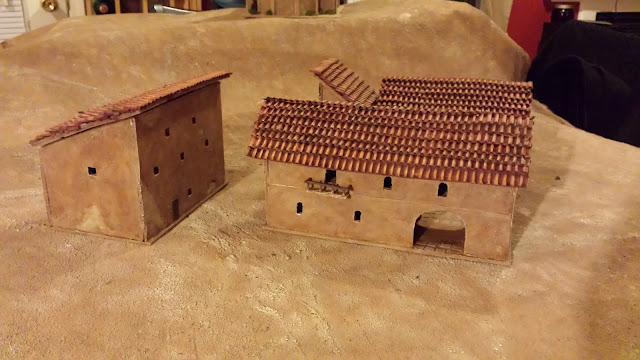 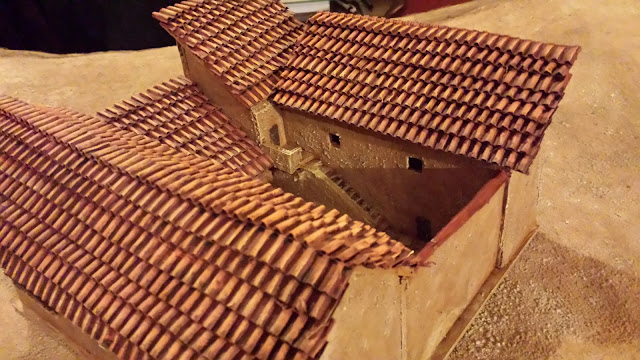 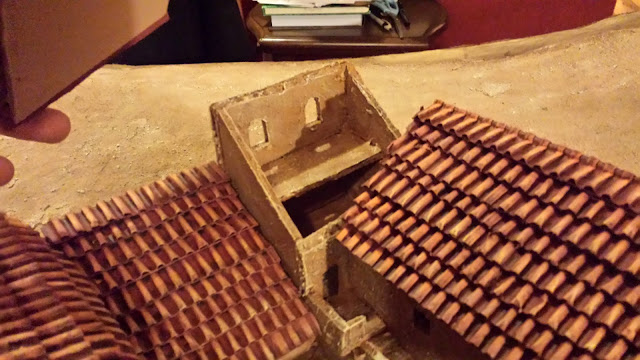 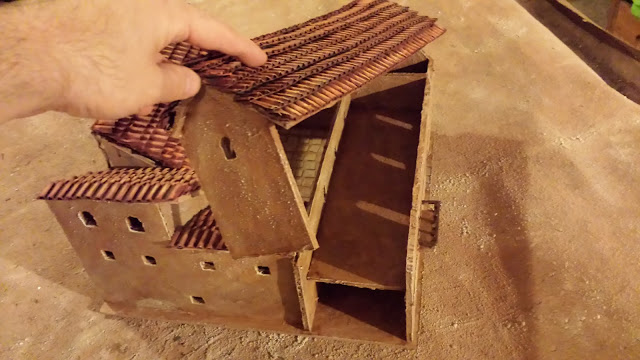 Finally, a picture of how it looks in table 4 for the campaign.  Time to game! 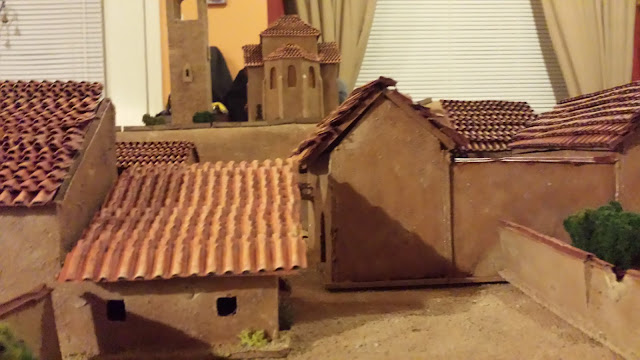 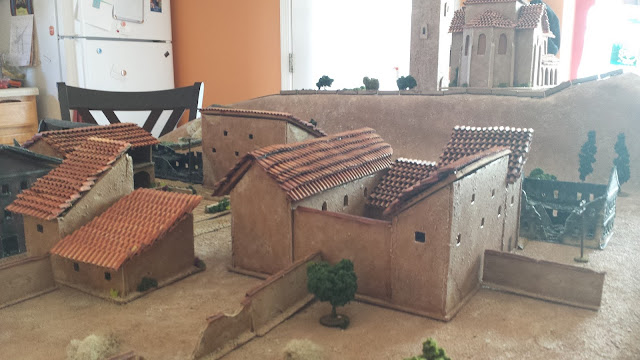 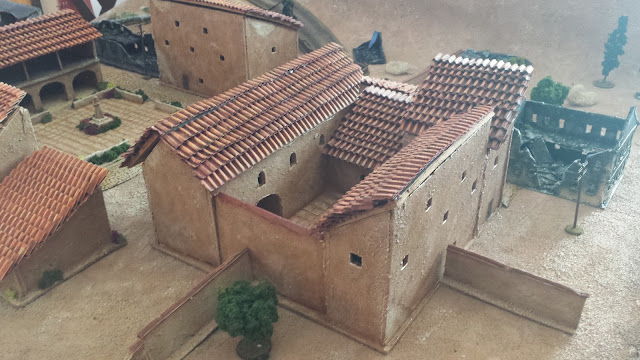