Risin isn't a populous world. Much of it is wilderness with widely spaced farming communities, but there are a few larger population centers.  The city of Gara doesn't even have a spaceport, but it is a regional capitol containing a supply depot rich enough to attract pirates to this largely peaceful area of space.

Seeing their dropship coming down, the planet's defenders deploy deep into the evacuated city, waiting for the pirates to arrive. 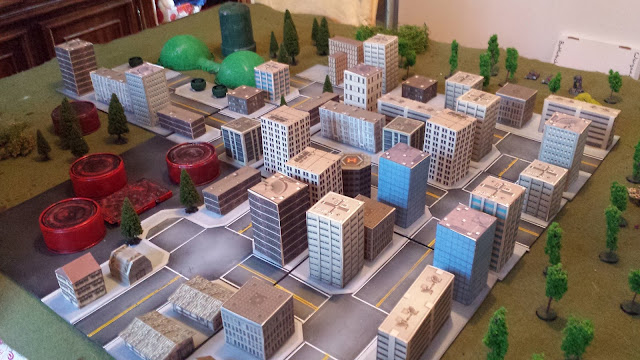 The pirates land and... wait is that MACKIE?  Wait really?  That's the first battlemech ever produced, and it hasn't been in production in 400 years!  Who still pilots those? 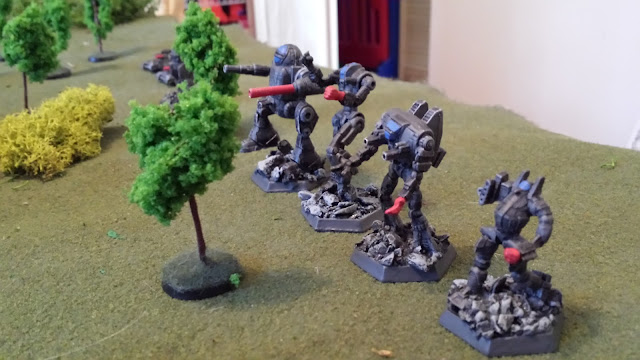 And an Urbie as well...  well, I learned not to underestimate the humble Urban Mech last time...  But those two Demolisher Tanks are surely a problem.  2 AC-20s can do a lot of damage, and four of them could potentially deal out 80 points of damage in a single turn. 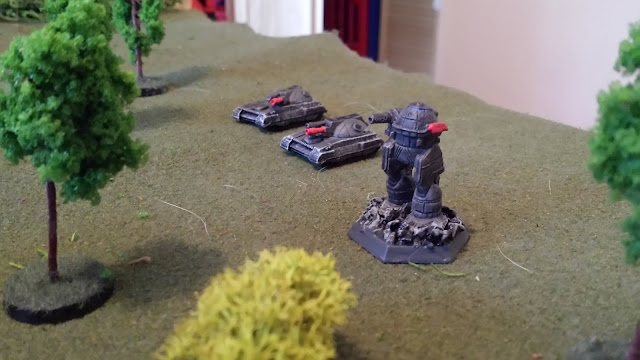 Dividing into two small groups the pilots advance. They detect no defenders, but their intel clearly points to a likely ambush by Outworld forces. 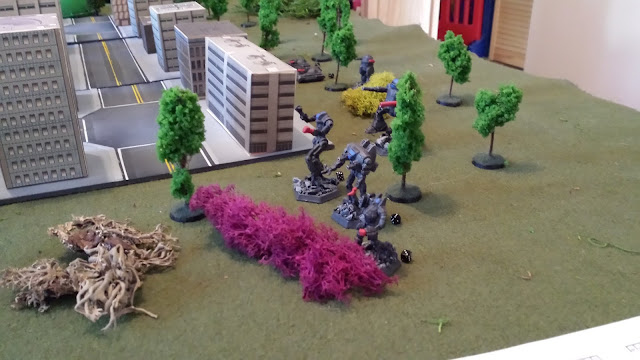 Not taking any chances, the two Demolishers live up to their name by demolishing a building.  Turns out they were correct about this one, and a unit of jump infantry barely makes it out alive as the building tumbles. 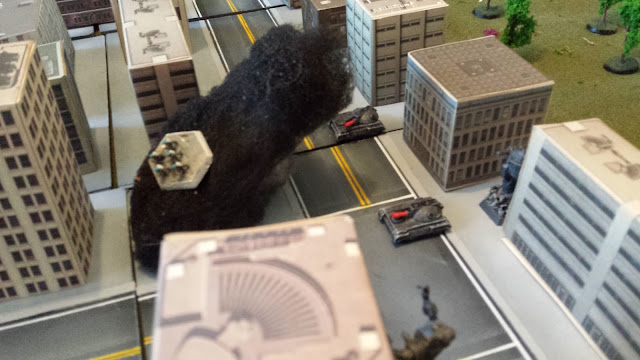 The mechs move in to support the tanks, but the mech commander forgot to deploy anti-personnel weapons.  There's narry a machine gun or flamer in the whole group.  Most of the fire is deflected by the ruined building, with few casualties.  SRM fire coming from the platoon is far more effective, damaging one of the tanks. 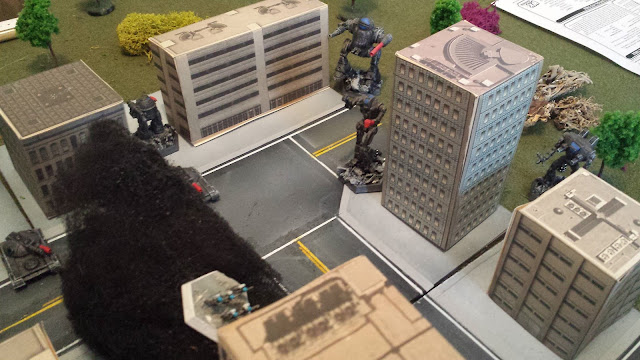 Leaving the tanks to deal with the infantry, the mechs pull back cautiously. Wait, four mechs fleeing a platoon of infantry? 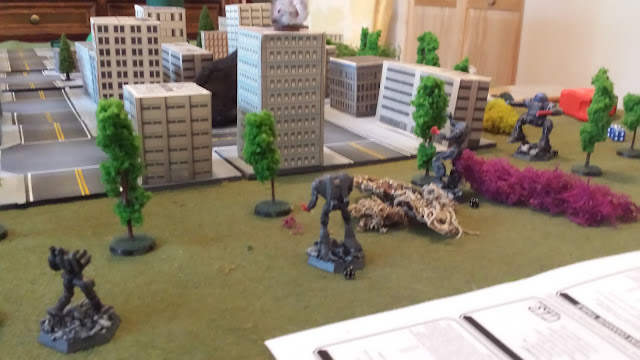 Meanwhile the jump platoon jumps onto a neighboring rooftop. 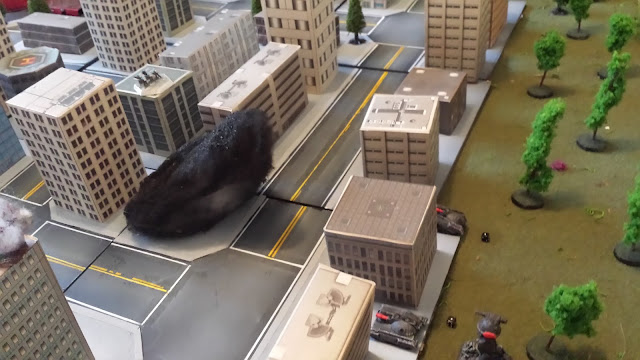 As the tanks move into the street, shells burst out of the top floor of a building. 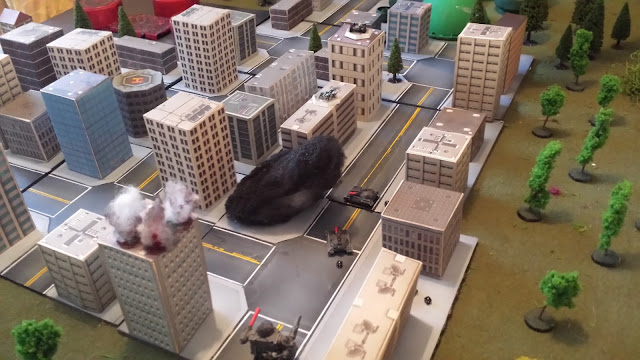 An infantry platoon has installed two Autocannon 10s in the top floor and starts to rain hell down on the tanks below. 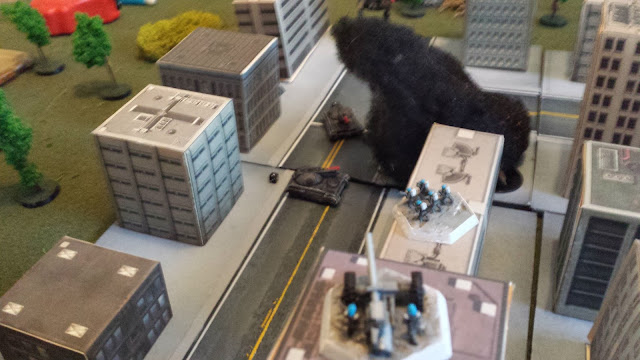 The jump platoon moves to support, and between them one tank's tread is heavily damaged, making it unlikely to ever leave this street. 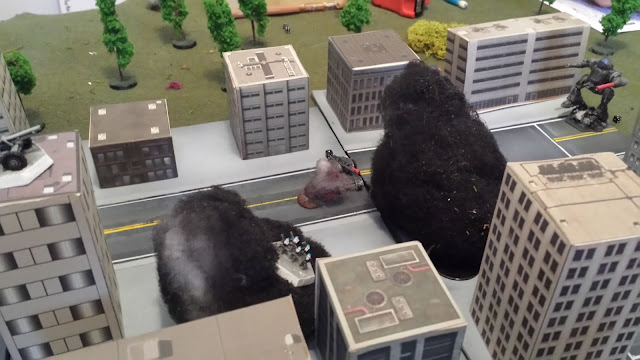 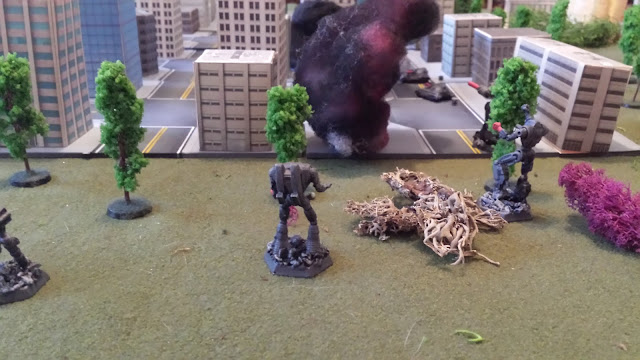 The pirate leader detects fusion engines starting up as an Awesome begins to move from the far side of the building.  Closer to the action, an Assassin and a Maxim Hover transport also prepare to join the fray. 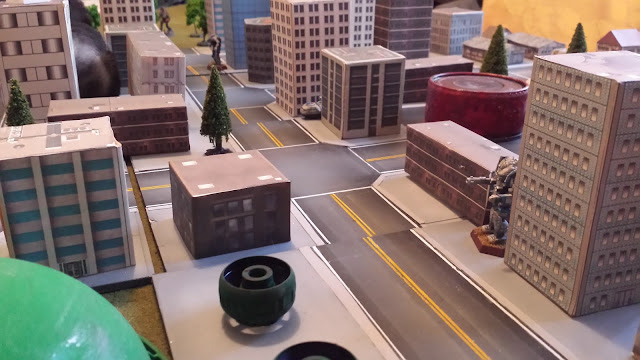 The Maxim deploys its infantry just as the tanks manage to collapse a building on the jump platoon. Taking shots from the surrounding infantry is wearing down the tanks.  Neither can move more than a couple of inches now, while their only targets are the infantry in the buildings. 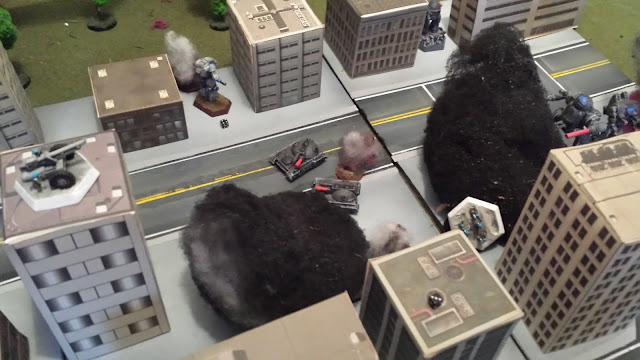 Wish a smash, the facade of a hotel blasts open, revealing an Ontos Heavy Tank, come to finish the Demolishers. 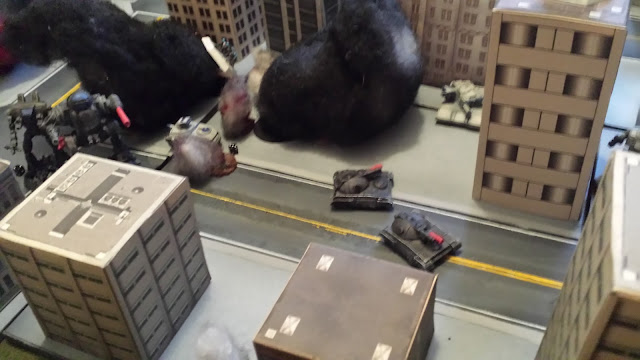 10 medium lasers with a side-shot on a tank nearly guarantee its destruction. 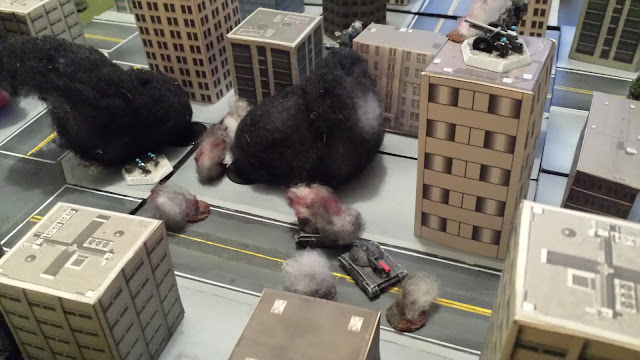 The pirate mechs are reluctant to get too close to the heavy tank, and wait their chance to get in on the action. 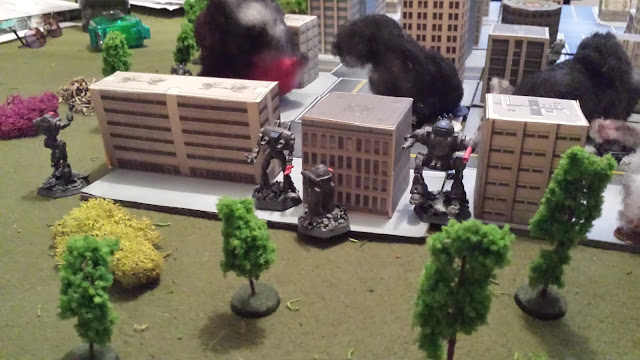 The Demolishers are soon finished off by the infantry, but not before they destroy the building housing the Field Guns.  The survivors pick up their laser rifles and continue to fight. 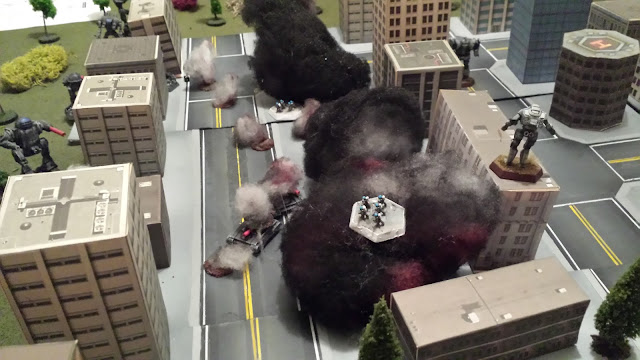 With the heavy tanks out of the action, the Outworld Alliance advances its two heavy mechs, and Awesome and  Banshee, to engage the enemy at close quarters. 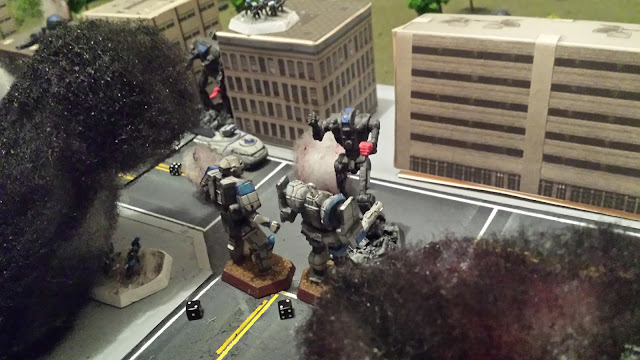 Meanwhile an Assassin Mech and the support vehicles aggressively push forward to engage. 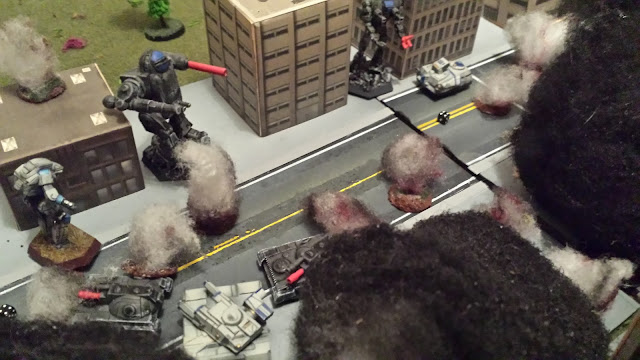 After a single brief exchange, the pirates realize that their remaining forces have little hope of raiding the city.  The recall order is given.  The Outworld commander, wanting to make it clear that the Alliance is no pushover to be raided at will, orders a merciless pursuit. 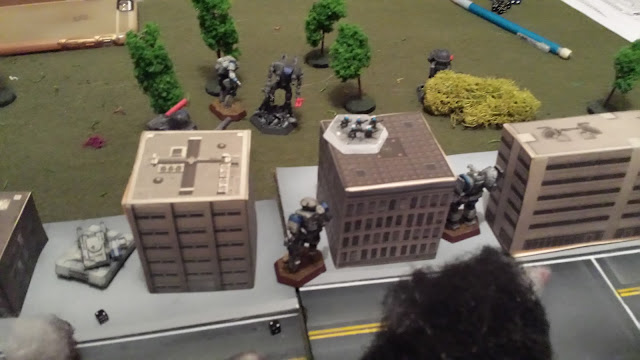 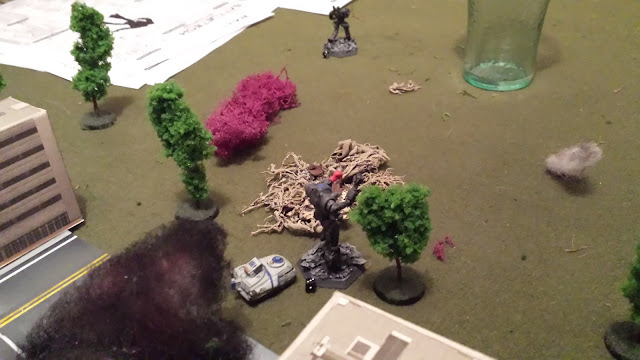 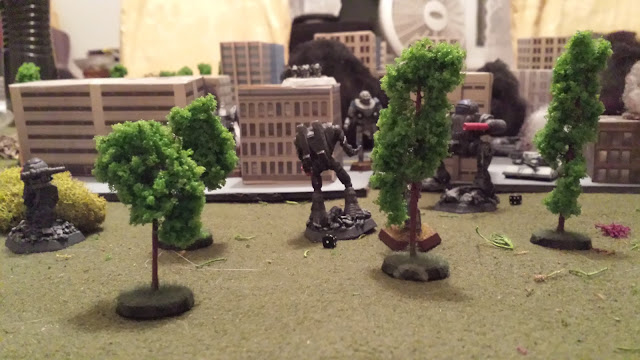 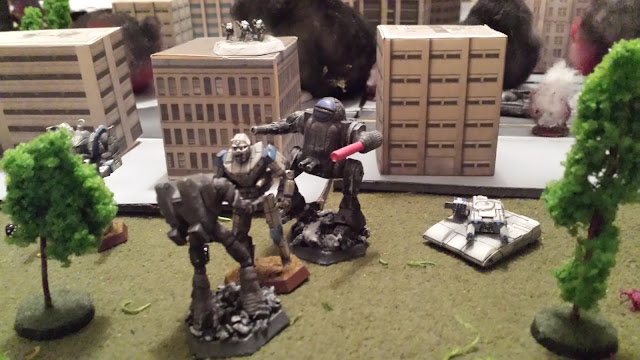 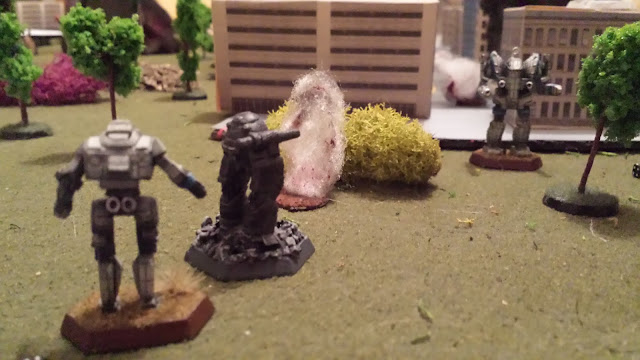 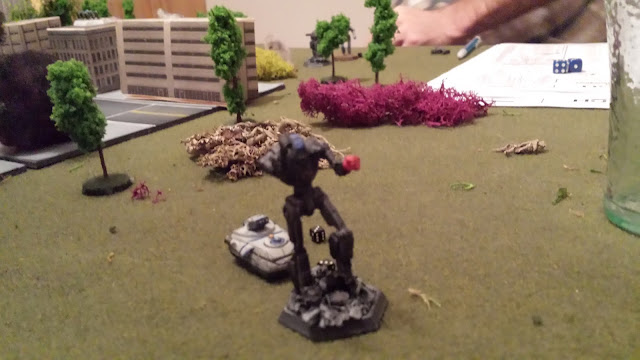 The aging mechs of the pirate group are not able to get clear.  Nearly all are destroyed, with only the fastest mechs getting clear. 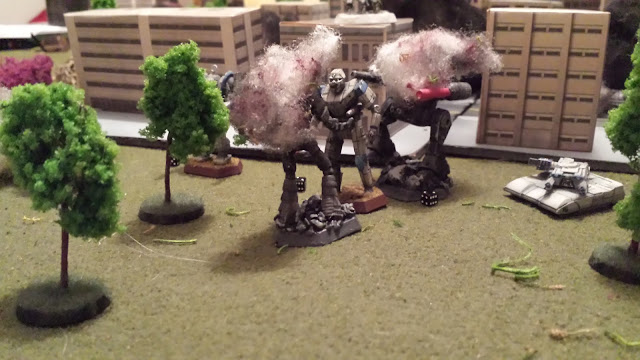 At the end, a decisive victory for the Alliance.  The enemy lost two heavy tanks and three mechs (including the Mackie and Urbie), while the Alliance lost a single infantry platoon, some field guns, and the Assassin's left arm.  There will celebrations in the capitol tonight!
Posted by Unknown at 2:06 PM