The Yanks are Here!

My American platoon is finally painted up and ready for the table. Fritz and I had a great game of Chain of Command yesterday, and I thought I'd share some pictures.   We played the Delaying Action scenario, which I think is easily the most difficult scenario available for the attacker.  We're tasked with taking a jump off point at the opposite side of the table (playing long ways), and ending the turn with a CoC die.  This is the only scenario I'm aware of where breaking the enemy would actually result in the attacker's defeat.  So it calls for patience and restraint, plus a fair amount of luck.

Taking a preliminary barrage as part of my 12 points of support, I decided to be aggressive.  A two man scout team rushed up to the farmhouse at the center of the board, neutralizing one of three enemy jump off points before it could be used to deploy. The early game definitely went my way. 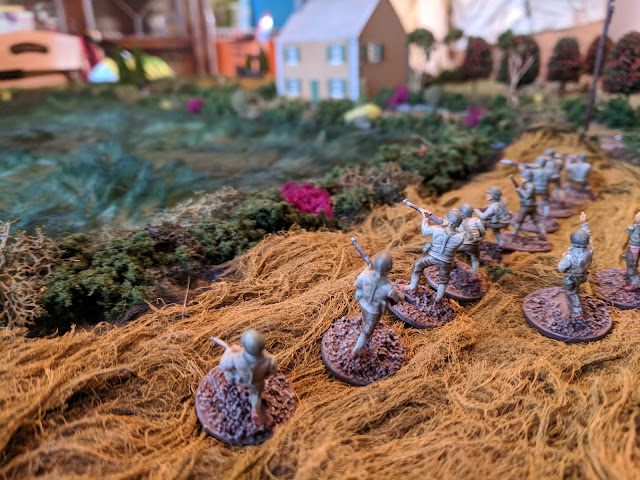 When the Germans brought on a half track, the Americans responded with a tank destroyer. 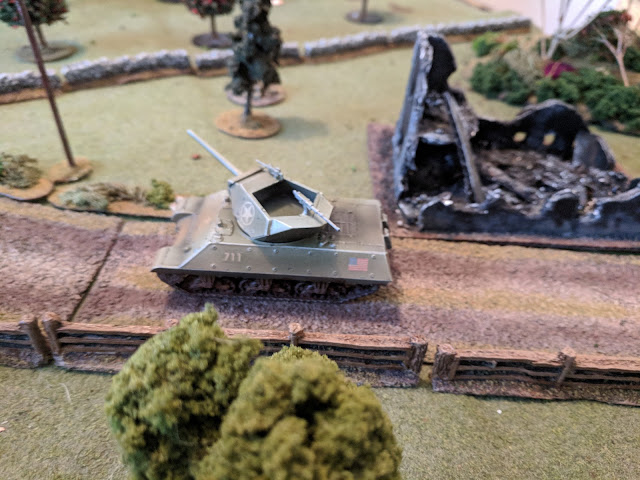 Neutralizing the jump off point allowed a squad to move up on the right behind the house, but they were taking machine gun fire from the enemy half track in the distance. 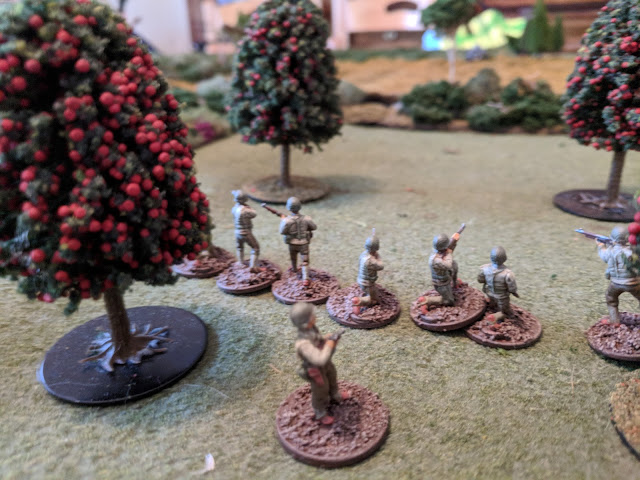 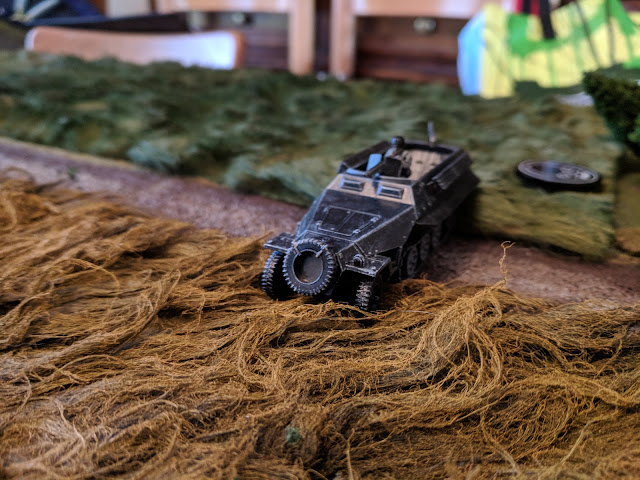 Worse, the enemy was using a sniper to hunt officers. 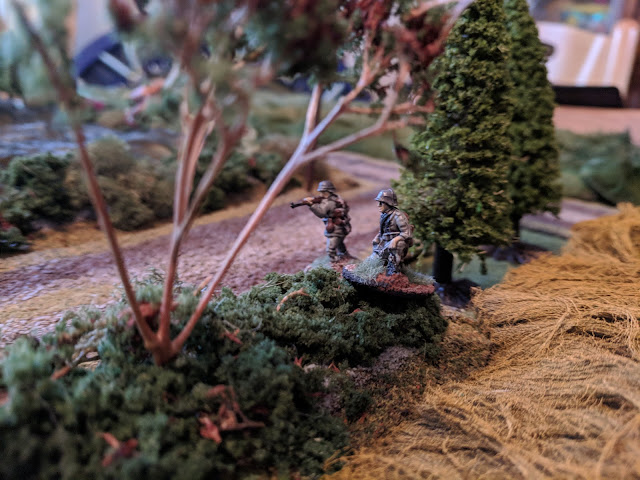 I hoped an aggressive stance on the left would distract Fritz from the right side of the board.   It worked, but I just wasn't able to exploit it. 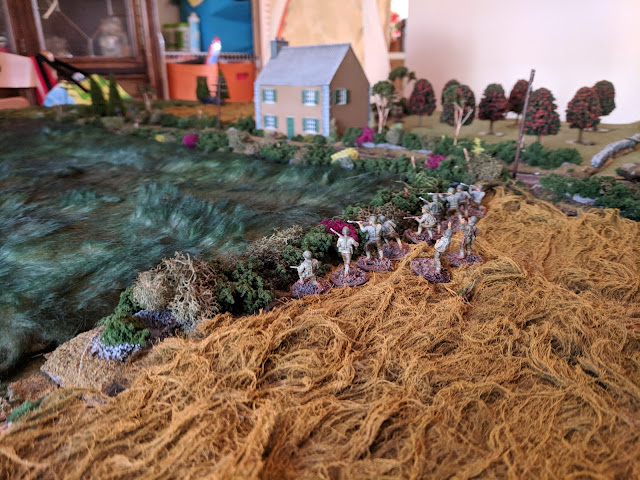 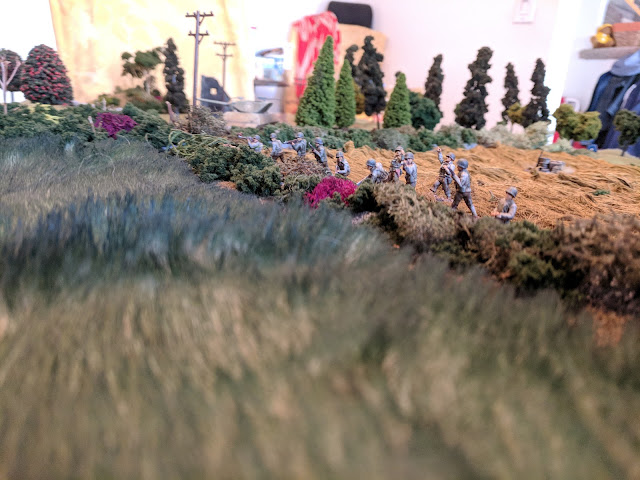 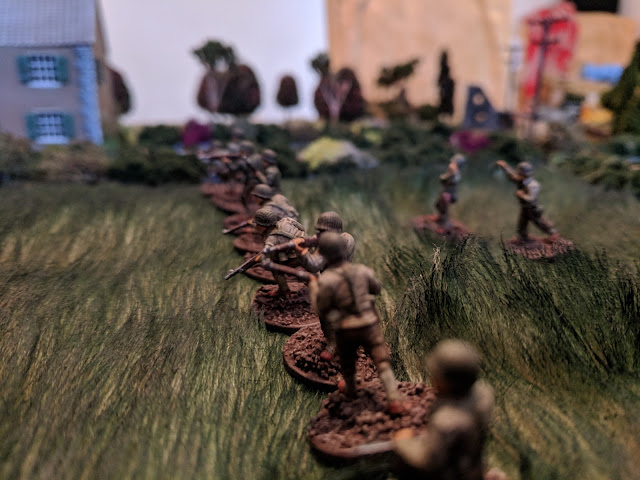 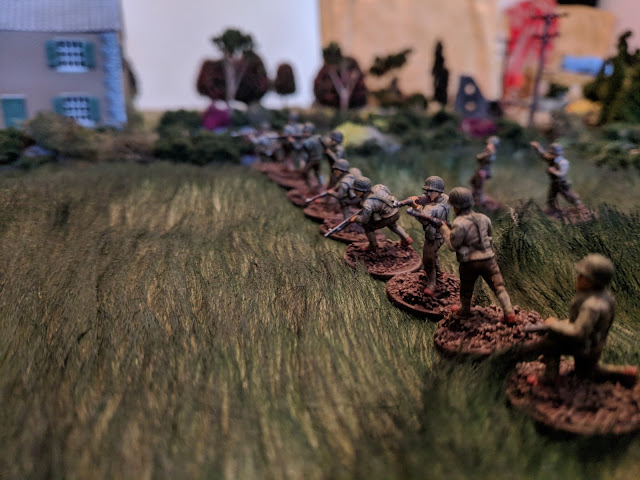 The Germans take the bait and deploy on the left, leaving me to deal with only the half track on the right. 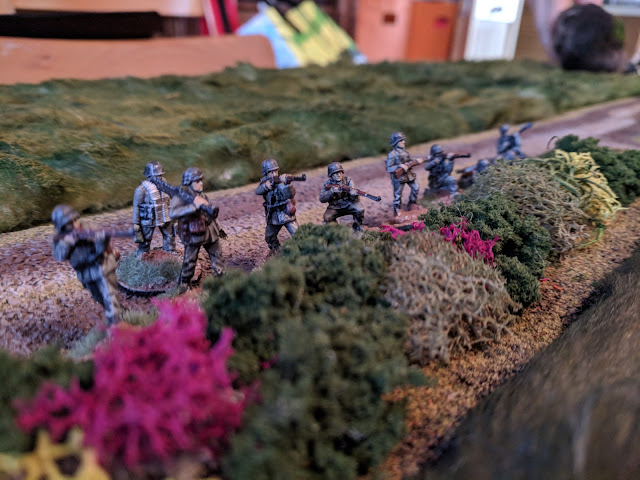 AT fire from the Tank Destroyer is inaccurate, thanks to all the intervening terrain. 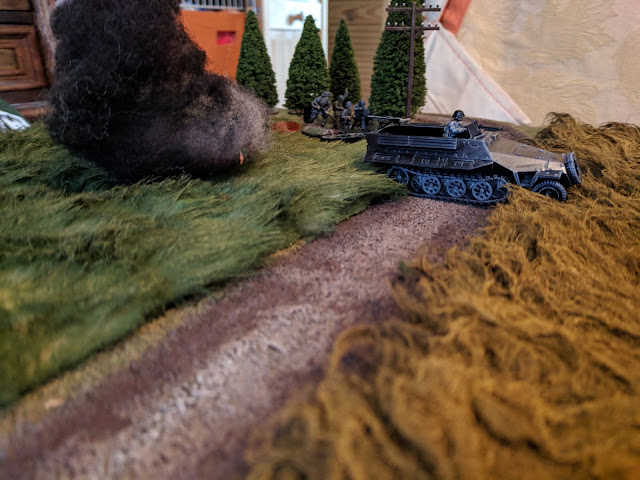 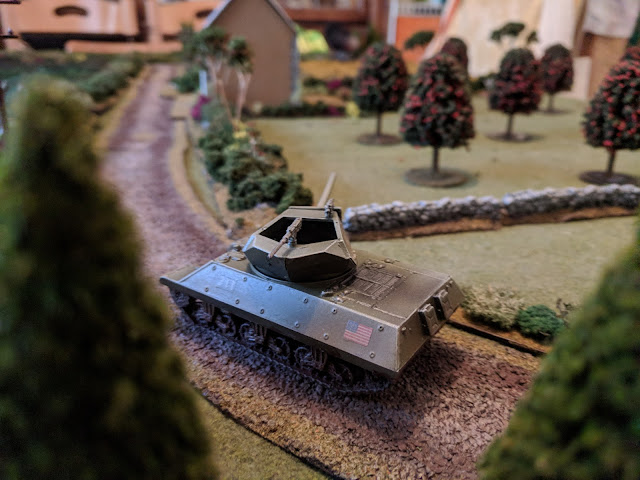 After about four misses, a shell connects, destroying the vehicle, but unfortunately not killing any passengers except the driver. 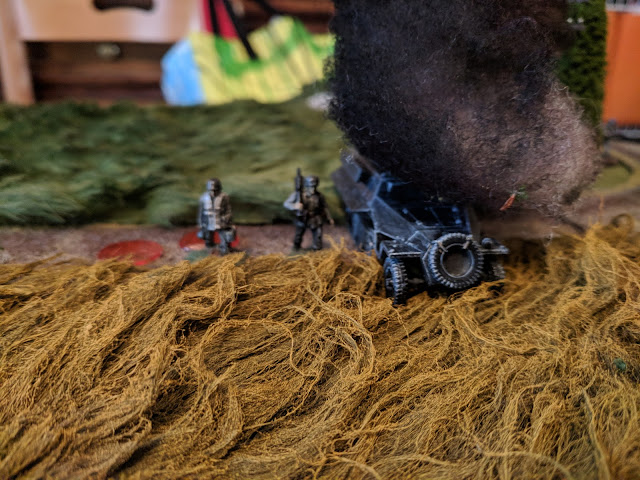 The Americans attempt to exploit the advantage by moving up their own half track, containing a machine gun section. 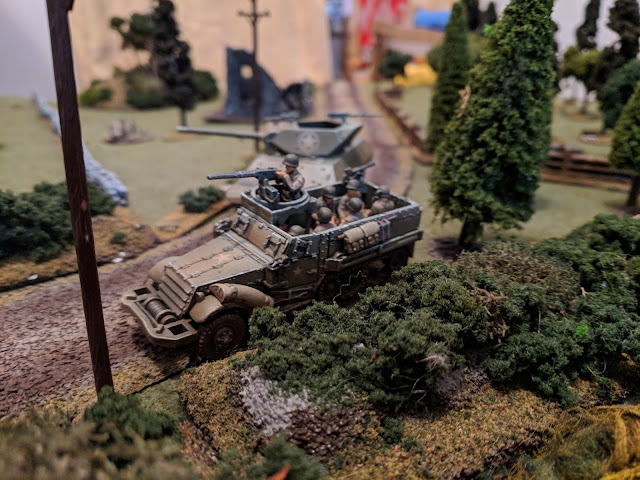 A German panzerschreck ambushes but misses its target.  The near miss was enough to get the machine gunners to dismount. 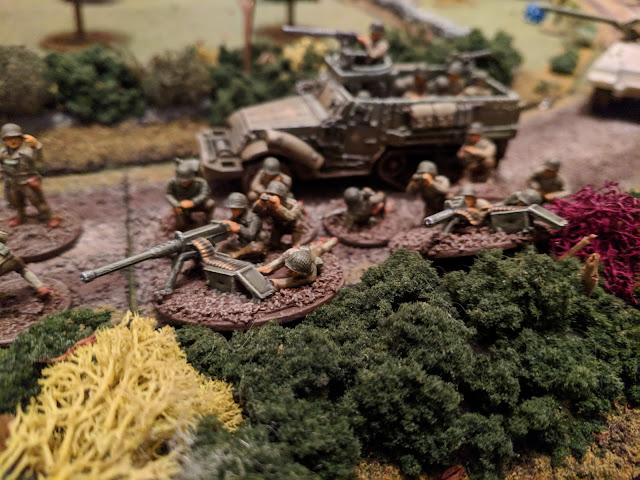 More Germans appear on the left. If I can get past them on the right, I have a chance at that far off jump off point, my objective, tucked into the right corner of the board. 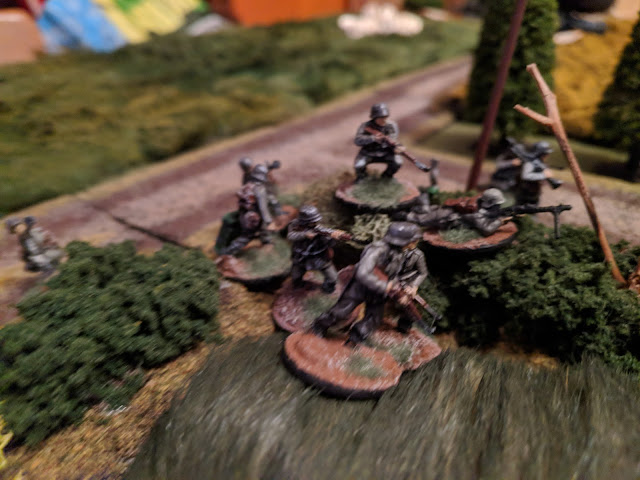 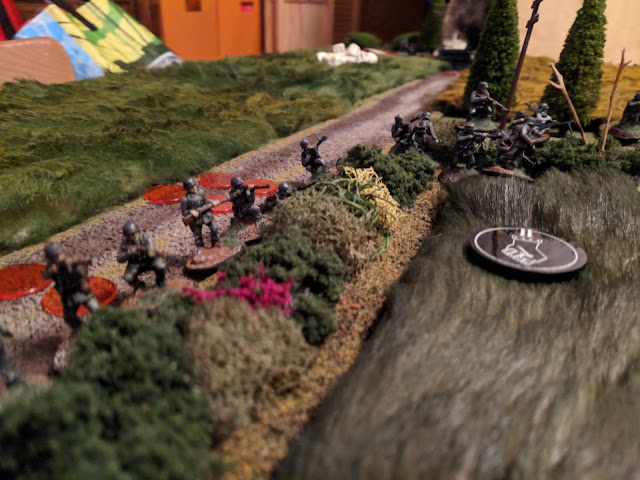 Up until now the Americans had taken only light casualties, but even with one section pinned down near the objective and the two out of position to defend it, the sheer weight of the German machine guns was starting to tell. A squad leader wounded, then killed, another wounded, a senior leader killed outright by a sniper... despite their superior position and their overwhelming numbers, they simply could not manage to advance any further.  Making a desperate play, the machine gun squad mounts up into the halftrack and rushes forward, praying the Germans will keep their heads down. With one die, Fritz is able to activate a leader to take a shot with a panserfaust. It connects as the half track passes, destroying it and dismounting the passengers. The machine guns open up on the crew, wounding the last senior leader and breaking the American will to fight. The platoon retreats to regroup.  We'll find our way forward another time. 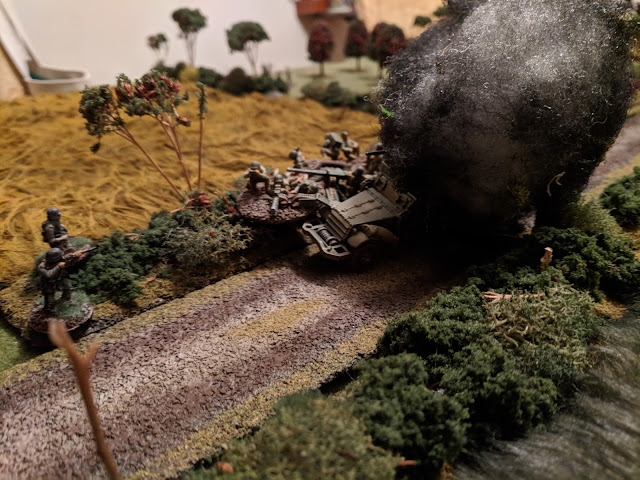 A great game, very tense.  Fritz and I both agree it is a really rough scenario but we're going to switch sides next game and see how the Germans do under the same conditions.
Posted by Unknown at 11:58 AM