A Walk in the Woods (Bill's Game) - Vicksburg Campaign

Bill has been playing his part in the Vicksburg Campaign by commanding the forces trying to contain the Martians in the northern Mississippi Delta region. After the Battle of Bolivar County, Colonel O'Malley's forces have regrouped, and so have the Martians. Now they are testing each other before the next Martian attempt to break through the American lines.  Assisting the colonel is Captain Fitzgerald, commanding the remnants of the Mississippi National Guard, now calling itself after it's old confederate unit, the 21st Mississippi. 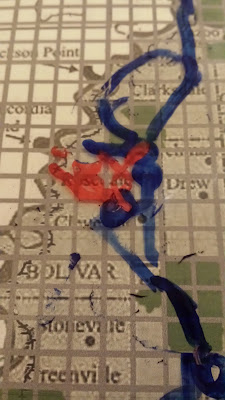 Bill writes:
"Bolg and his tripods advanced towards the humans. As they got close to the reported position, the martians slowed down. The terrain had become a mass of woods and swampy ground. Bolg decided to keep together and all of his force moved to the left. 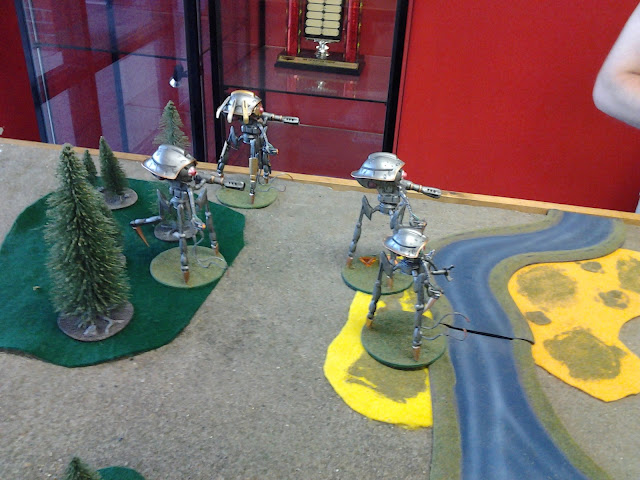 Captain Fitzgerald watched from his concealed position. His men were well hidden and ready to spring the ambush. As the martians reached the stream, his MK 3's opened fire. The scout and one assault tripod were damaged.

The tripods heat rays shot forth, killing a tank and unknowingly setting the woods on fire. Bolg suddenly realized his tripods were too close together. Before he could give the order to spread out, the humans fired again. 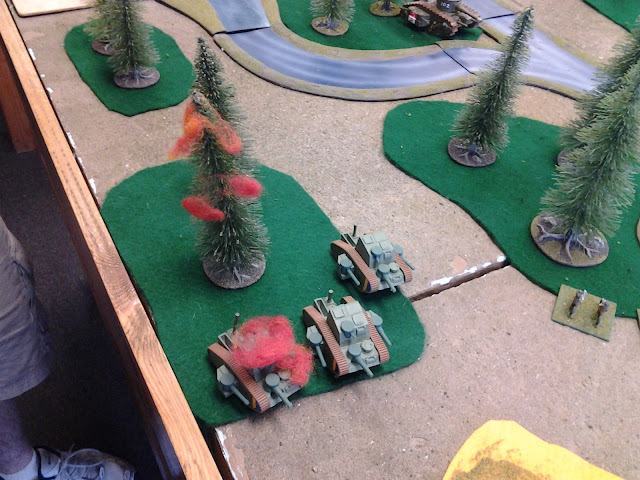 Taking revenge for their lost comrade,  the tanks pounded a single tripod.  With a blinding flash it exploded. The resulting fireball washed over the other three tripods,  damaging all of them. A unit of hmgs popped up and riddled the scout, sending it crashing to the ground.

Bolg swept his heat ray over the hmgs, killing one of them and setting that woods on fire as well. The other tripod swept some rough riders killing two of them.

The Captain couldn't believe his luck. Two tripods destroyed for almost no losses in return. As he watched, another tripod was hammered. One of it's legs was blown off, and it staggered then fell to the ground. A runner from Leutenant Searfoss arrived with the report that four more tripods had arrived and were rapidly moving forward. 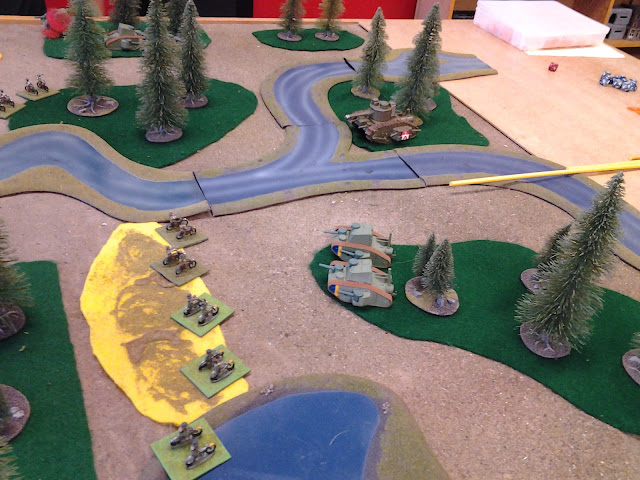 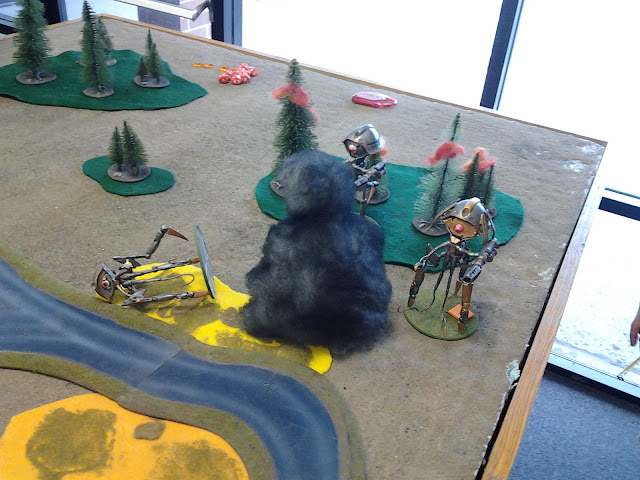 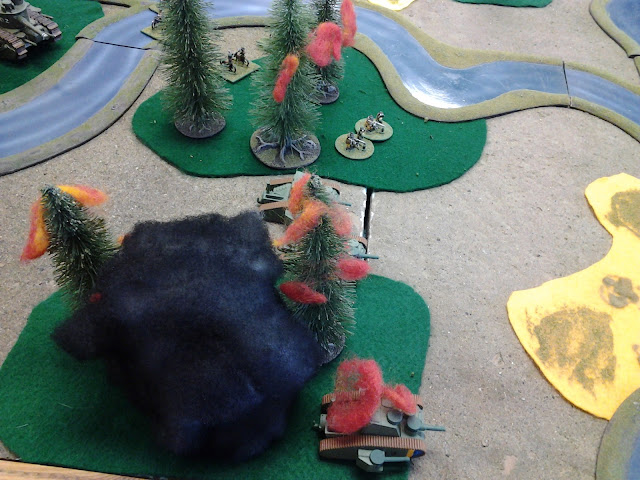 Bolg was shocked. How could these human insects have done so much damage. And now, out of nowhere, Azog was here with more tripods. His tripod staggered and almost collapsed. He saw that his armor was almost completely gone. Azog ordered him to leave, he was lucky to be alive.

At this point in the game both commanders had a decision to make, to stay or to leave. Captain Fitzgerald had seen three tripods be destroyed for the loss of one tank, one HMG, and two rough riders. He had won, the smell of victory was in the air, and it was strong. The Captain got greedy and went for the glorious bigger victory. Azog had seen his forces smashed. He became infuriated and threw caution to the winds, seeking revenge on the humans.

More fire reached out at the new tripods,  but did nothing. The woods on the right were now raging infernos. All at once, he realized in horror,  that the troops would have to run for their lives. Some had no choice but to run right in front of the martians. Sure enough, the HMGs and an infantry squad ran out into the stream, desperately trying to escape the flames. 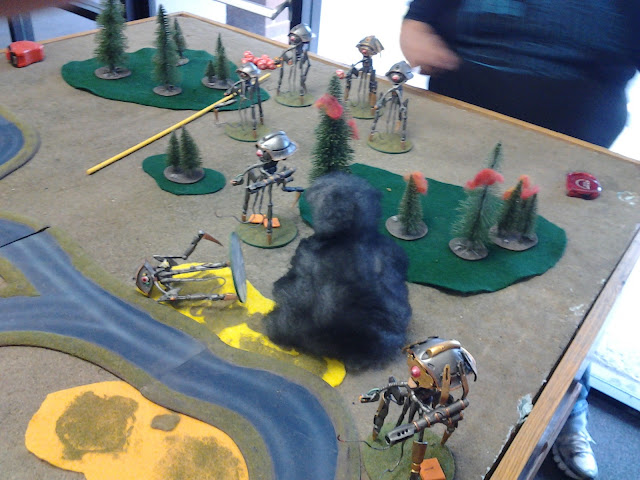 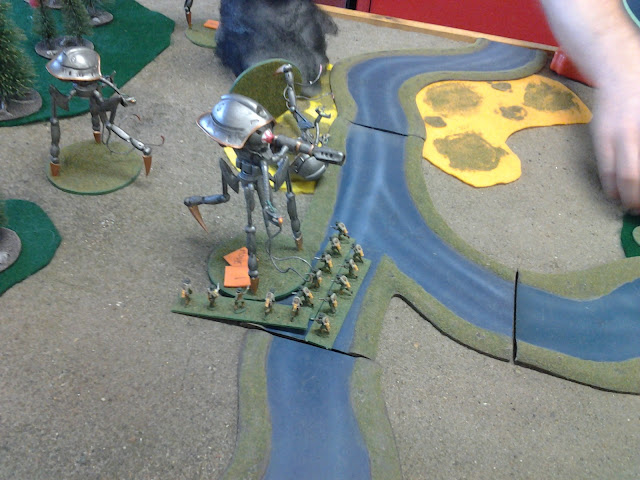 Azog took advantage of the opportunity. The heat rays licked out, wiping the human infantry out. Another tank went up
as well. Maybe something could be salvaged out of this disaster after all.

Captain Fitzgerald realized he had made a terrible mistake. He should have left when he had the chance. Due to the new martian force and the fires, his losses had skyrocketed. He was about to snatch defeat from the jaws of victory. The orders went out. Everybody retreat as fast as you can deeper into the woods and swamps. 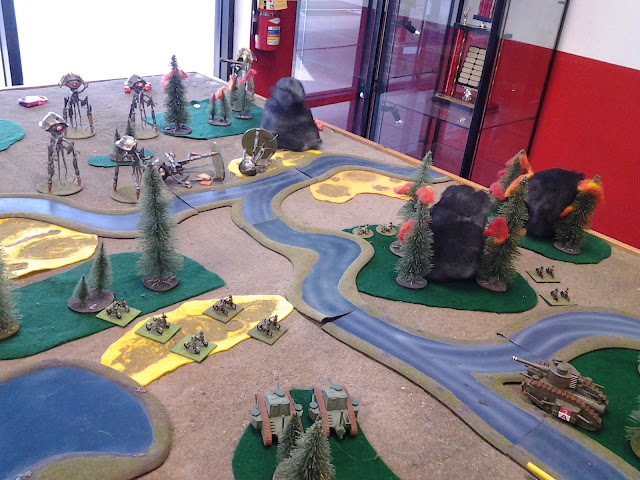 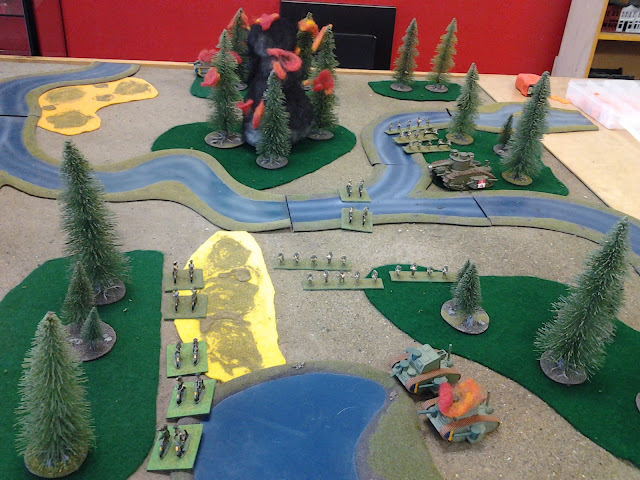 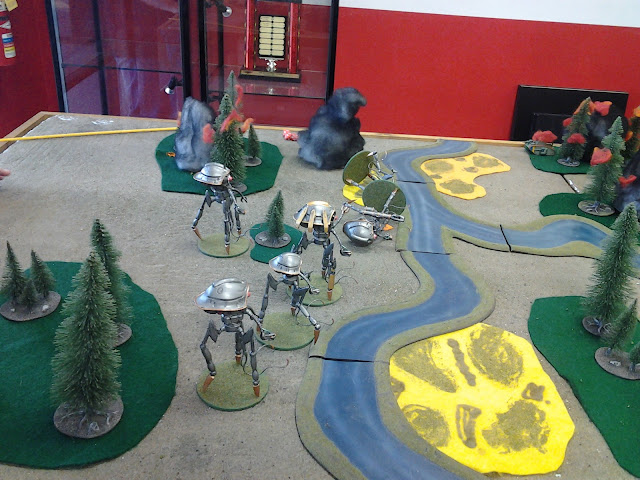 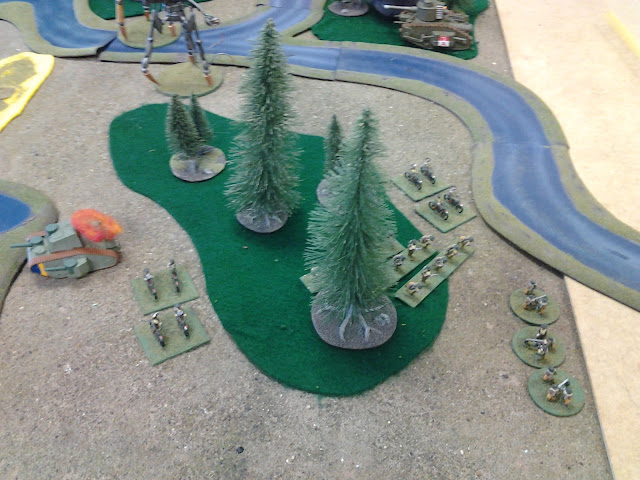 Seeing the humans suddenly start fleeing, Azog sent his tripods across the stream at full speed. Another infantry unit was swept away. Then, except for the big tank, they were gone. The heat rays shot out over and over, trying to finish it off. All they could do was destroy the guns on one side, then it was gone too, safely hidden.

Captain Fitzgerald heald his breath as the
martians tried to kill the MK 4. Hit repeatedly, it managed to survive. He had still won, but the cost was higher than it should have been. 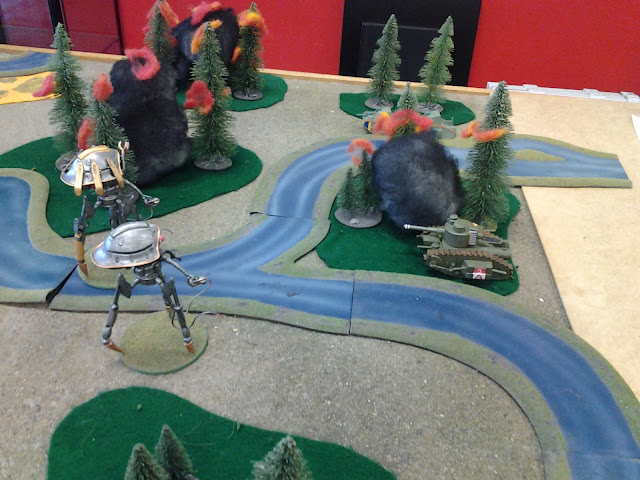 Azog brought his tripods back to the downed assault tripod. The scout picked up the leg that had been blown off. The other three picked up the rest. They headed back to the construction engines, carrying their comrade. It would take time, but he would fight again. 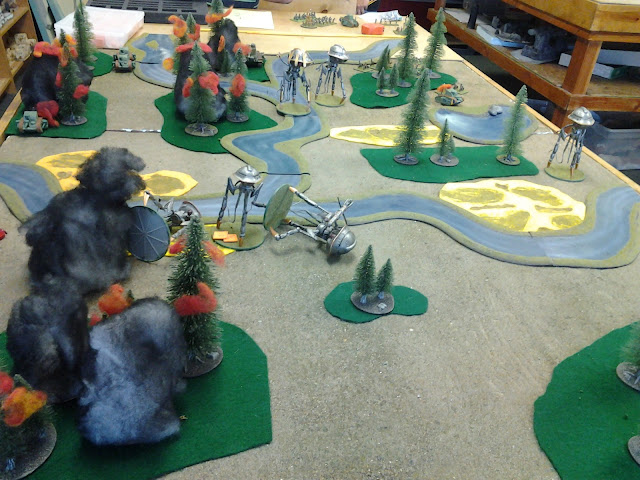 Captain Fitzgerald sent off a message to Colonel O'Malley,  informing him of the victory. The Captain also asked if he should stay where he was, or rejoin the Colonel while he gad the chance?

Colonel O'Malley waited to hear the results of the 21st's battle. His losses in the big battle two weeks earlier had cost him 40 percent losses. Now division wanted him to send 2 battalions south. His entire force was barely 2 1/2 battalions in total. His second battalion had been wiped out. The fourth had taken
almost no losses in the attack on the Martian rear. The first had lost 1/3 and the third had lost 1/2. He would send them and keep the fourth. It was all he could do.

Azog reported the failure to destroy the humans and his losses to the Overseers in Memphis, and awaited their displeasure. He asked again for reinforcements,  but really didn't expect to get any.

Without telling Azog, the Scientist had already contacted the Overseers and informed them that he Must be sent 2 or 3 more controller tripods,  and that one of them should be a Reaper. Without them there were too many drones for one slaver to control. That would put the mission given to him by the Royal Scientist in jepardy. Even though he didn't deserve it, Azog should probably get more tripods as well. The Overseers could just go complain to the Royal Scientist if they didn't like it.

The Martian losses have made them even weaker than before. Not sure what's next for them. The 21st won, but took way to many casualties in the end. At least Clay realized his mistake and ran before it became fatal. There is now a window of time where the 21st could rejoin the 118th and make a stronger force.
Posted by Unknown at 12:47 PM