I played my very first game of Chain of Command with my buddy Jamie a little while back and although he immediately declared it to be his new favorite game, we utterly butchered the rules in that go-around. Now that I have a better handle on them (and have more appropriate SCW terrain and finished figures), he came over to revisit the game.

It was kind of a last minute thing, so there's no specific setting. Maybe Aragon 1938 or one of the many Nationalist counter-offensives? I finally have some tanks and armored cars up so I wanted a scenario with plenty of support, so I chose "Attack and Defend" and rolled for sides of the board, but other than that I left the game up to Jamie. 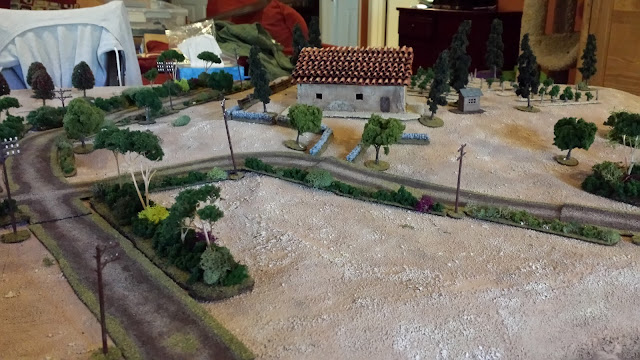 "Which side do you want to play?"

Jamie:  "I want to be fascist!" (this despite his actual political leanings and personal style - I wonder if liberals and anarchists have a "shadow fascist" deep in their unconscious that only comes out in wargaming and addiction to WWII documentaries.)

"Do you want to attack or defend?"

"Fascists attack!" As if it were a natural law of the universe. Which, I suppose it kind of is.

And so, the fascists attack! 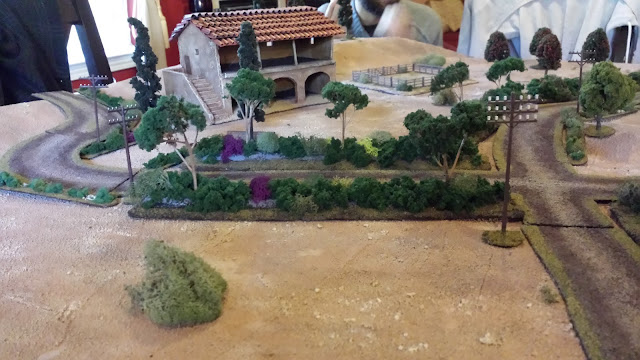 A vital crossroads, linking parts to other parts. Perhaps Madrid or Barcelona. 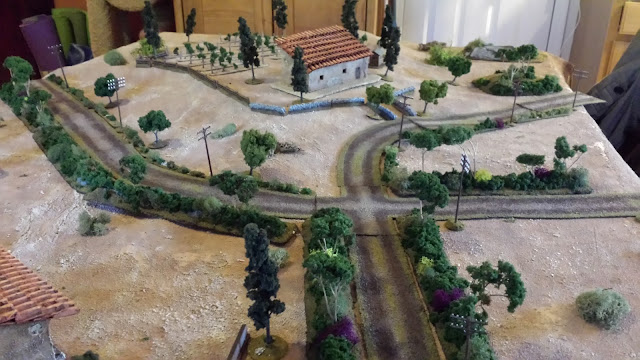 The view from the Fascist table edge. 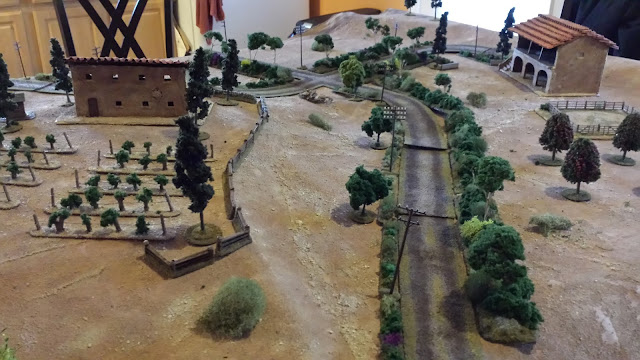 This crossroads is so important it's guarded by an HO scale angel. 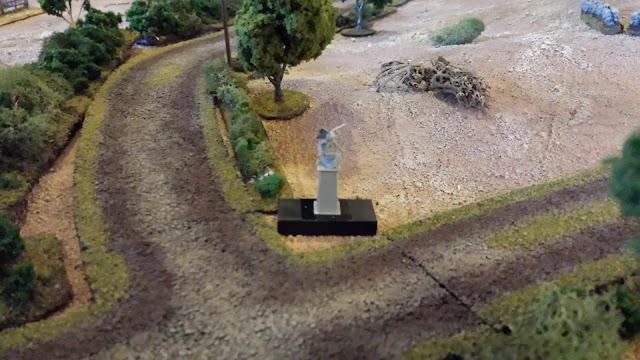 The patrol phase went poorly for the fascist bastards, so we it played again and the same thing happened, so we assumed it was fate. Jamie only rolled a 2 for his free moves, which didn't give him much of a head start. I was able to lock down his patrol marker in the vineyard almost immediately, and on the right he was stuck more or less in the open. 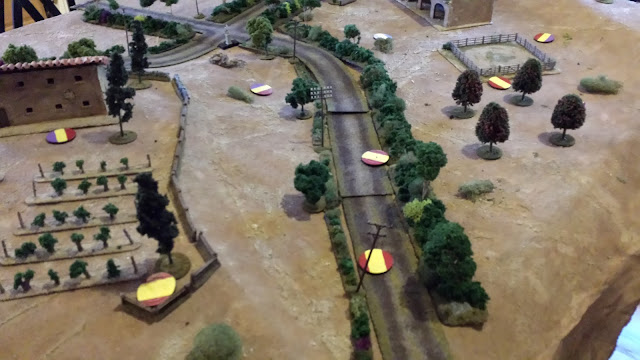 The game begins. For support Jamie took a captured Russian T-26 tank, molotov cocktails for one team, a heavy preliminary barrage (for 3 points, giving me a -1 on the deployment roll), and a sniper team with his 11 support points. For my 4 I chose a Bilbao Armored Car, a LMG, and molotov cocktails for a team.

The fascists attack!  Deploying behind the vineyard, they are clearly hoping to bum rush the house before I deploy. The tank also deploys immediately, positioned nicely to support the infantry. 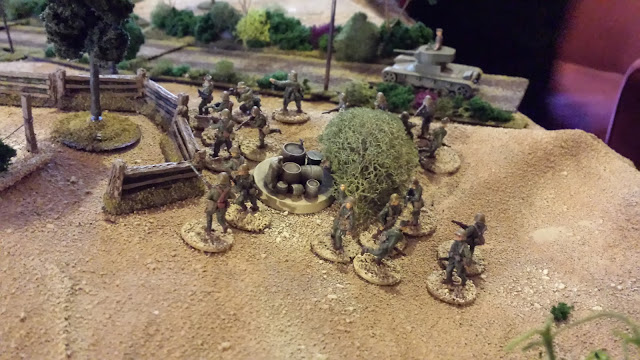 Fortunately for democracy, freedom and political commissars everywhere, I got lucky on my first attempt to deploy a section and put them into the house where they had some excellent shots at the fascists already on the table.  Attempts to bring on other forces fail due to the heavy barrage. 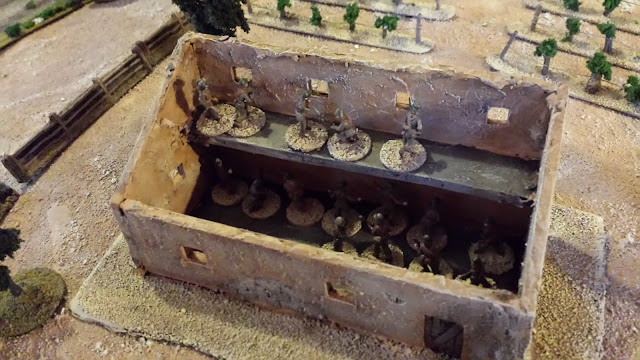 While the bottom floor was shooting through rows of vines (increasing the cover level to hard), the LMG squad on the second floor had better line of sight and caught some of those bloody fascists in the open. 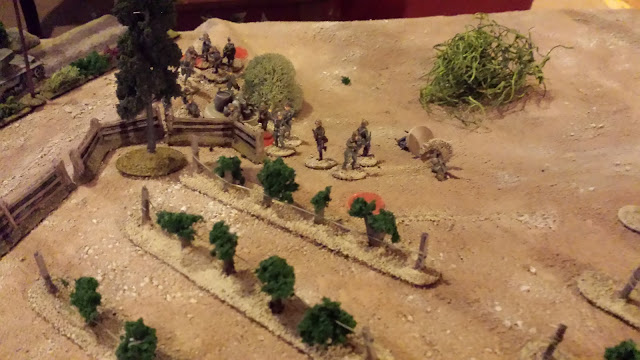 Meeting heavy opposition up on the hill, the fascists decide to deploy their other section into the orchard, hoping to move quickly towards better cover. 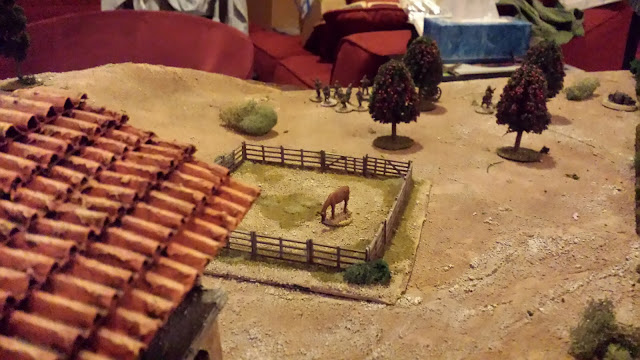 This game saw a LOT of 5s rolled, and by this point we both had a CoC die. I spent mine at the end of Jamie's phase and ended the turn, negating the effect of the Heavy Barrage. Another Republican section deploys and covers the whole approach on Overwatch. After my last report, there was some debate on whether a Junior Officer can put a squad on overwatch the turn they are deployed, but I can't find that rule in the book or FAQ, so I'm going to play that they can. 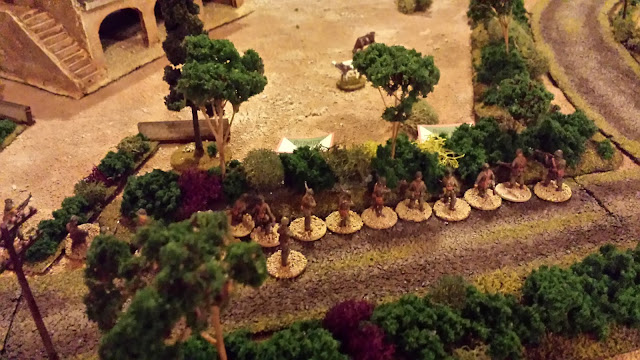 I also finally got that armored car on the board.  Not too shabby for my first time painting camouflage if I do say so myself. Maybe a little dark but not bad. Needs a bit of weathering maybe... 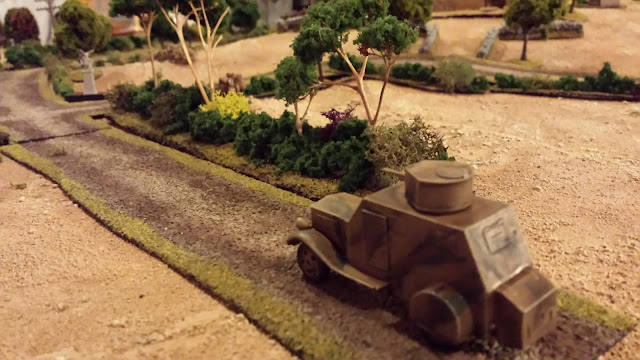 Meanwhile the fascists were taking a pounding in the vineyard. They were laying down accurate fire into the house too, with the tank remaining stationary and firing into it almost every turn. The Republican soldiers bravely holed up in the house were taking casualties, but the Junior leader was very effectively managing shock. The fascists were getting hit harder, and with their worse cover they were accumulating shock rapidly, diminishing their ability to fire.  They deploy a senior officer to help with the shock. 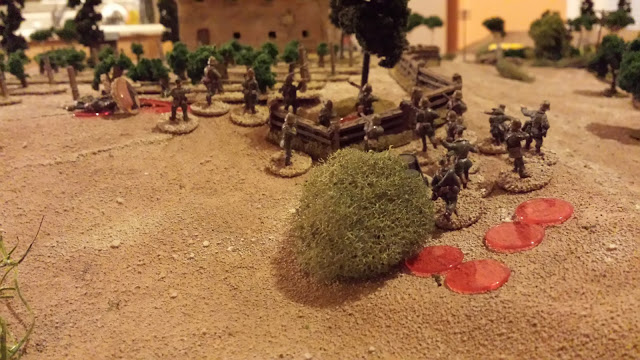 Moving under fire, the section moving from the orchard makes a break for the cover of the barn. 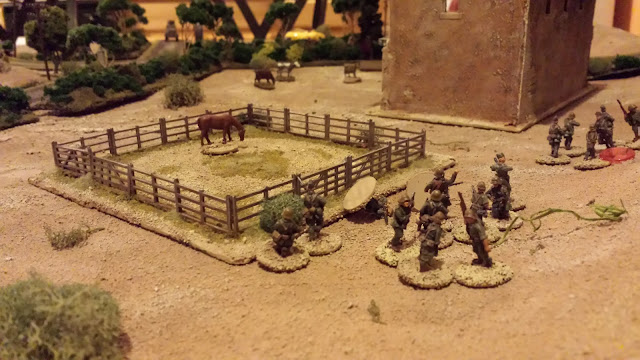 The armored car moves up in support lending its MG to the fire. 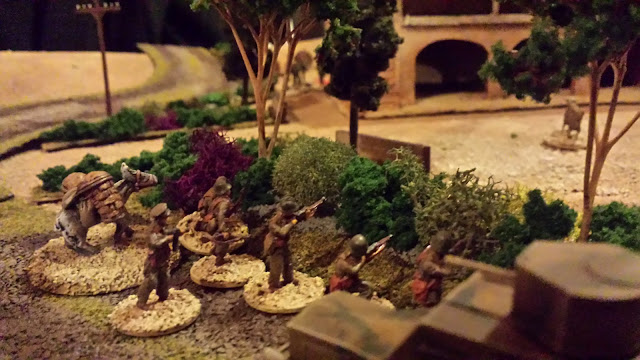 One team of fascists tries to move around the house and rush the stairs to the second floor. A Republican team beats them there, cutting them off in the open. They take withering fire. 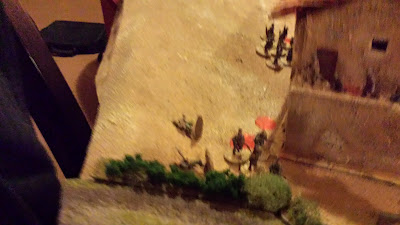 And despite constant pressure on the house, the section in the back of the vineyard continues to get roughed up. Worse is the fact that despite the officers, the need to manage shock means that Jamie can't get the teams to move into better positions. Every time the fascists shoot, there are at least 2-3 soldiers that are behind the immediate firing line. The line is a mess, and with the shock the fascists are putting out less and less fire. 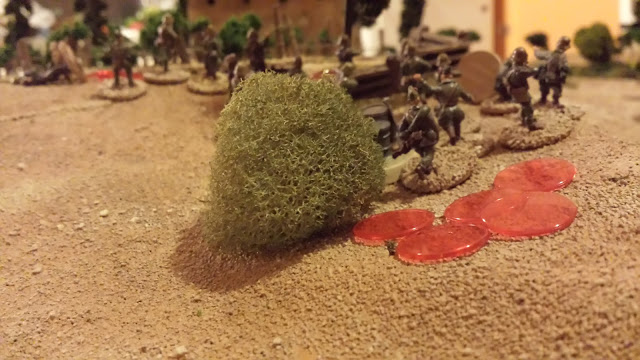 On my left, the Junior leader pulls a team of men into the Bilbao Armored Car and peels off in search of soon-to-be-dead fascists. He finds some and helps them to their destiny. 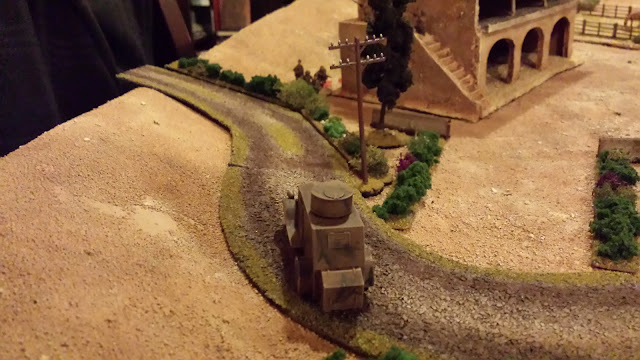 Conditions in the house meanwhile are deteriorating. My 15 man section is down to just 8. The fire from the tank is particularly effective, even if the men out in the vineyard are less so. I'm a bit worried that the fascists will manage a charge, but they're not close enough to make the attempt. 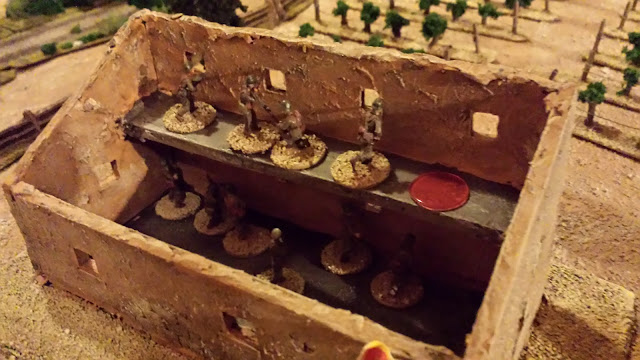 The section behind the building tries to organize itself out of line of sight. The Junior leader is too far to reduce shock from the team getting shot up by the armored car. Jamie cuts his losses and abandons them to their fate. He is beginning to worry, and is making strange comments under his breath about how he has to win or the anarchists and communists will destroy the country. 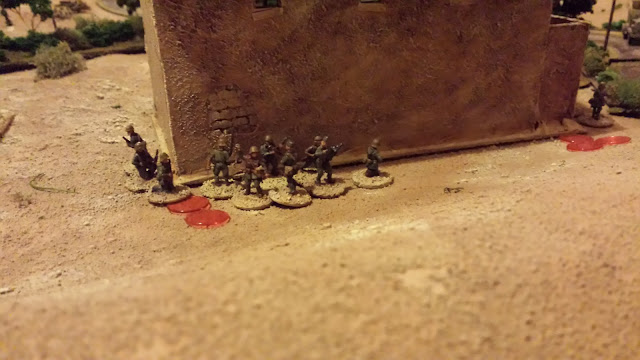 They are soon pinned. 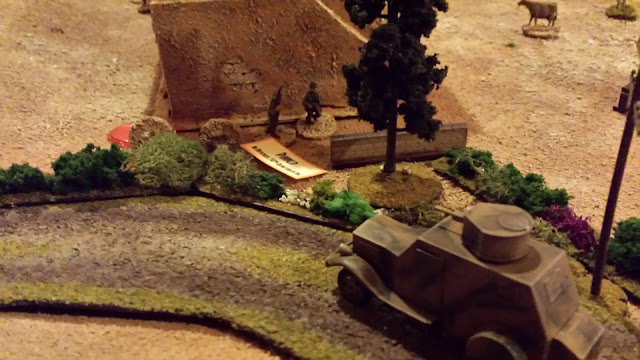 The situation in the house gets worse. The section sergeant is killed by H.E. fire from the tank (causing my morale to drop). I deploy my senior leader behind the building (unattached, so not taking fire, but within command range of the whole building), and move two decimated teams (1 man and 2 men) out of the building, replacing them with my small 3rd (mortarless mortar) section of 8 men. Along with the still function LMG team, it shouldn't be a problem to hold this position until the Nationalists break.

(I'd originally been holding the small section off the table, as they had the molotovs and I was hoping to catch the tank if it moved up. Jamie kept it in the same place all game, firing H.E. into the house, so there was no need to keep them back any more.) 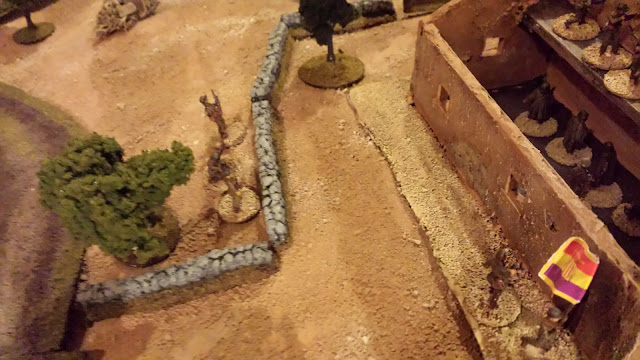 Much to my surprise, those two tiny squads started taking fire. I hadn't considered that the other section might have line of sight on them from across the board!  This certainly isn't Bold Action folks!   The senior leader activates them and gets them back over the wall, thankfully without any casualties. If Jamie had managed to kill any of them it might have forced a force morale check. 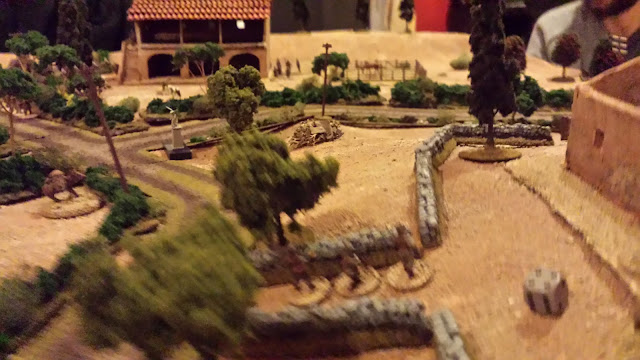 My sergeant orders the armored car up the driveway, firing all the while. The fascists are trying to set themselves up in the hard cover of the house. This side of the board has become a bit disorganized. My section is broken up into 3 independent squads, and the junior leader is commanding the armored car. This means the men behind the hedge taking fire have no way to reduce shock, and I haven't rolled enough 1s to activate them. 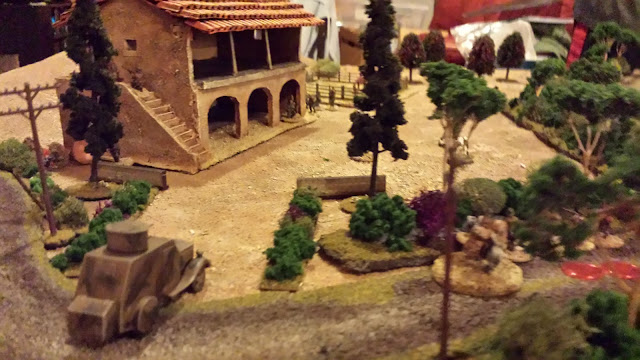 Jamie now has both of his senior leaders attached to the section in the vineyard. With a run of three phases and with three officers on the scene, he manages to get rid of nearly all of his shock and cause a few casualties to me. Thankfully I'd been using covering fire or it might have gone far worse. 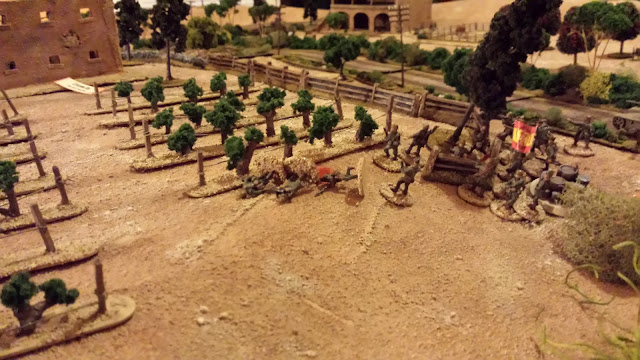 But having so many officers in one place can be dangerous. His junior officer was killed outright and a senior officer wounded in a flurry of fire from the LMG. The Nationalist force morale takes a hit (dropping to 5 I believe). 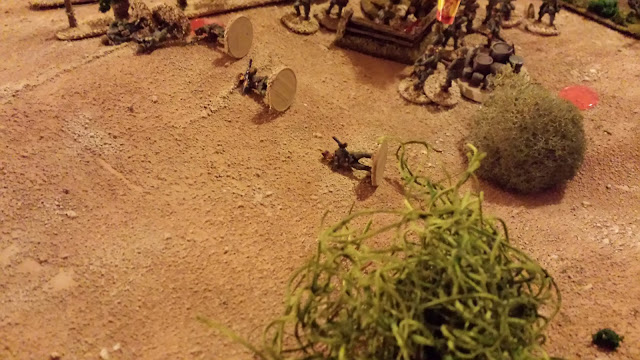 On the very next phase, the wounded senior leader is killed the uninjured one wounded. Jamie spends two CoC dice to avoid rolling on the chart. But it doesn't save him. The last senior leader is hit again, and he can't avoid rolling on the "Bad things happen chart", losing command dice now. At this point it is only a matter of time before the Nationalists must withdraw. 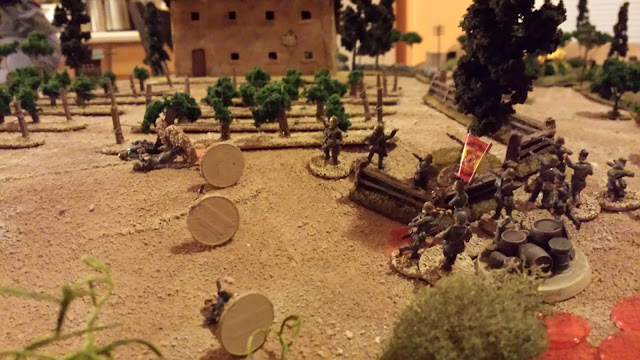 Meanwhile, the section sergeant pulls the car in front of the barn and orders his men out, using the car as cover.

"Throw down your weapons and come out with your hands up!"

Jamie throws up his hands. The game is over. 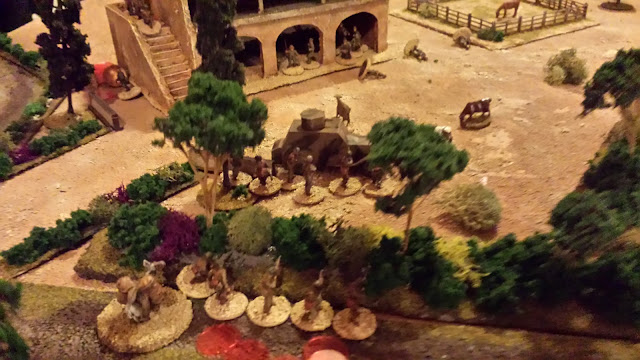