"I've been working on the rail road..." AQMF report from Bill

An addendum to the Vicksburg Campaign... while most of the 29th fights to defend the Yazoo Line in the southern Mississippi Delta, Colonel O'Malley's force in the north attempts to repair the rail line along the river while awaiting a relief force. Write up and pictures by Bill.


"With the destruction of the Martians in the north, repairing the railroad was the top priority. After two weeks of frantic activity,
the repairs were finally done.

Each morning the Colonel had looked across the river. And every morning a scout tripod stood there watching. Yesterday the scout had been joined by 3 assault tripods. Maybe the attack on the railroad was coming. When Colonel O'Malley looked this morning,  he was stunned into shocked disbelief. The scout
was still there, but he had been joined by
2 more scouts, 6 assault, and a grenadier.
Towering over all them was a gigantic gold tripod. Twice as tall enormously massive,  it sent a feeling of terror up and down the Colonel's spine. An Overseer, here now, just at the wrong time. It had to be an Overseer,  it was too big to be anything else. What was so important that the Martians felt they had to send one of their leaders here??

As he watched,  all of the tripods except the one scout and the Overseer moved into the Mississippi river. The humans rushed to their defensive positions. After several minutes there were two explosions as mines emplaced in the river blew up. 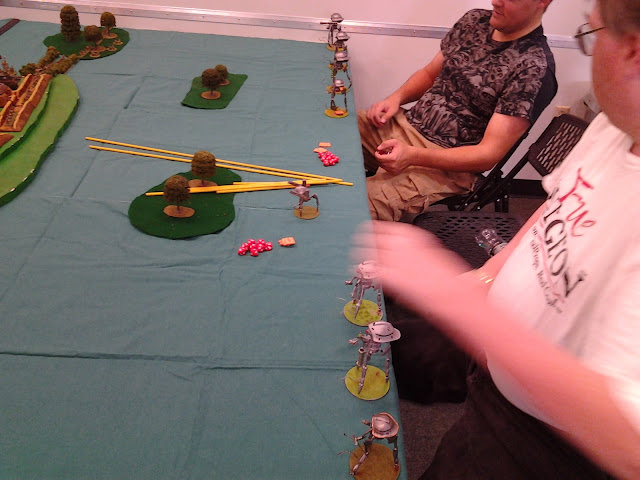 The Martian machines came up out of the river, water streaming off their bodies. Two of them were visibly damaged. Score one for the mines. The humans opened fire, causing damage to a scout and one with green gas. The Martians rushed forwards. Their fire killing an hmg and a infantry command team.

The Martian rush continued. The heat rays reach out, damaging 2 MK 4's and killing 3 infantry. The human tank reserves arrive. The human fire is fierce. A scout and an assault are damaged.
The second scout blows up. An assault tripod explodes ad well. Unfortunately the
resulting fireballs take 2 hmgs, 2 infantry,
4 rough riders and a tank with them. 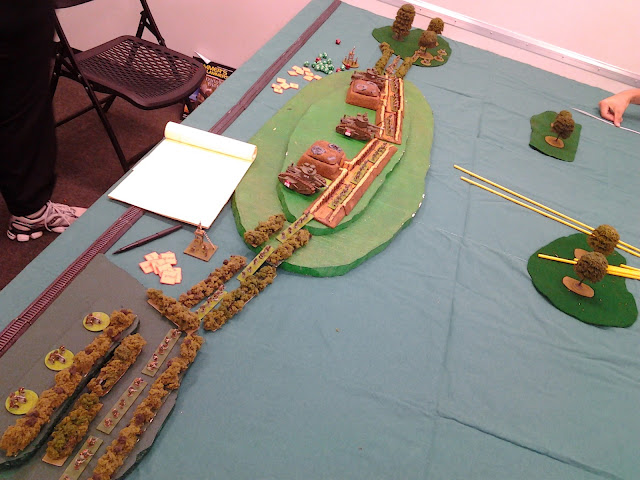 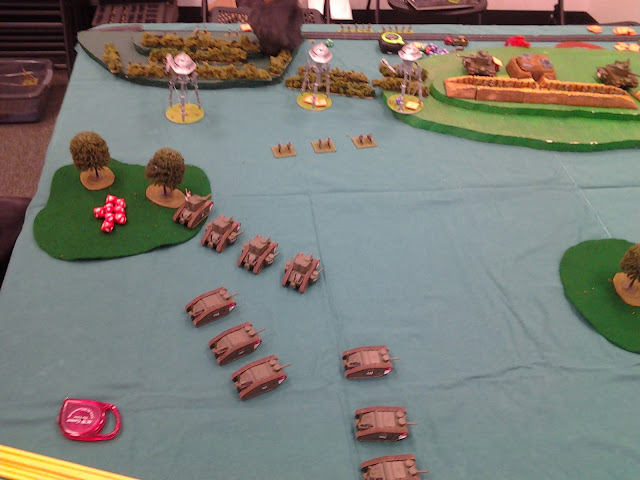 The Colonel watched as the ferocious battle got even more intense. Several tripods stepped over trenches or came right up to them. Finally in range, the heat
rays torch the railroad, melting and slagging 4 sections of track. A MK 4 goes
up in flames. The remaining rough riders entangle two tripods,  making them easy targets. Both take heavy fire. One crashed
to the ground,  the other explodes. 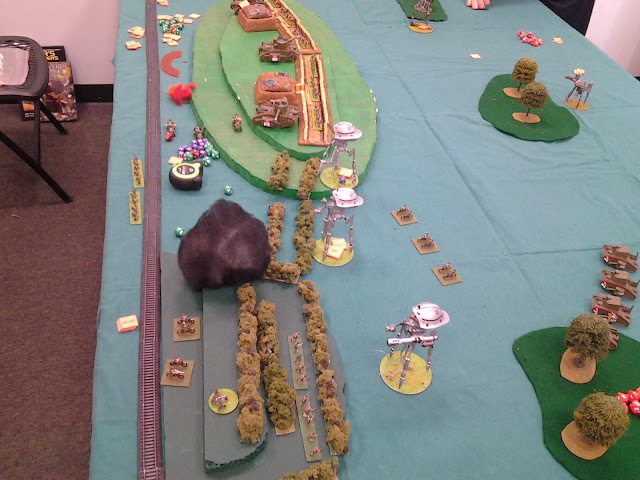 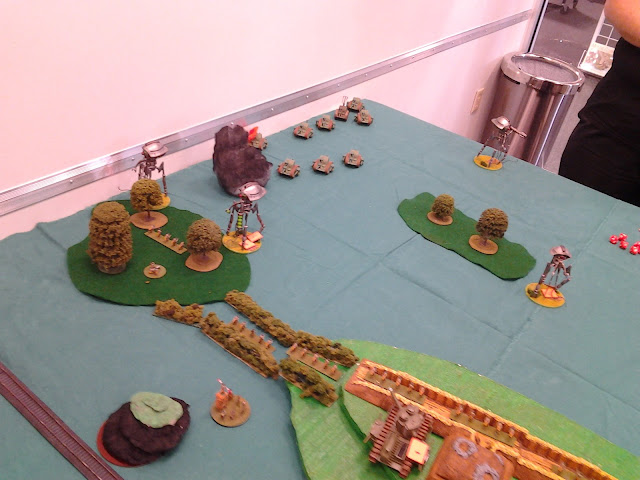 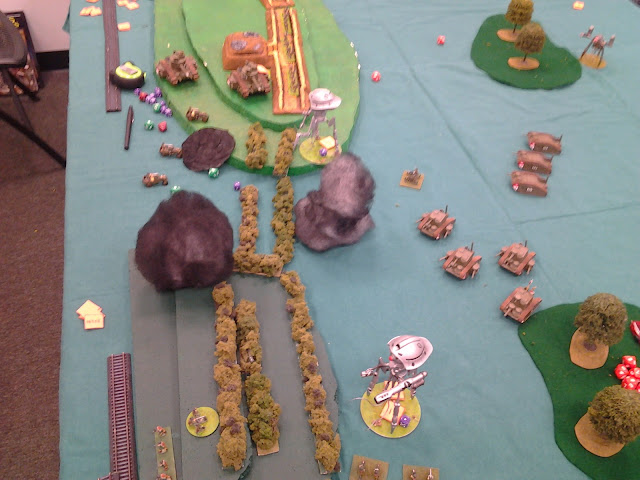 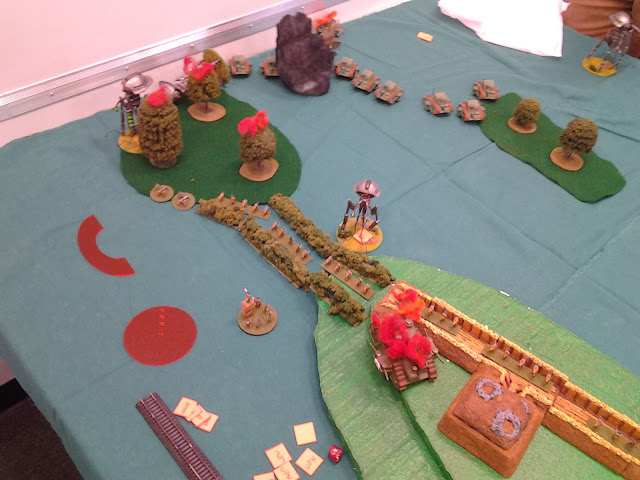 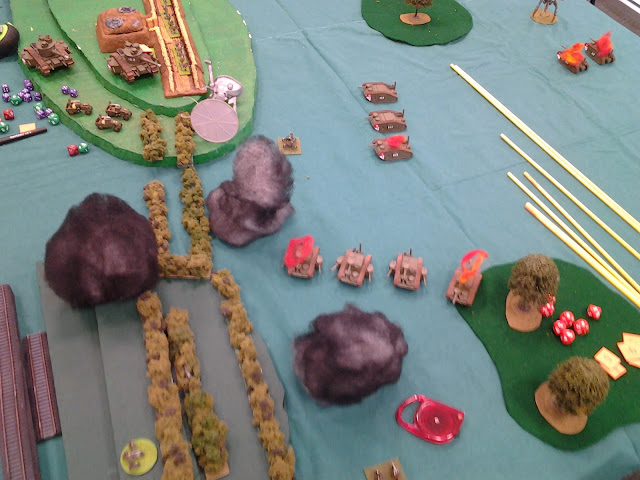 The remaining tripods kill several tanks. Return fire blows up another tripod and causes another to fly apart. Suddenly it's
over. The last three tripods run for the river. Two are badly damaged. The Colonel waited to see if they would reappear. Only the grenadier came out. The others taken by the Mississippi, too damaged to survive the return crossing.

The Overseer remained briefly, then turned and disappeared. The grenadier leaving as well. The scout was still there, watching and waiting. 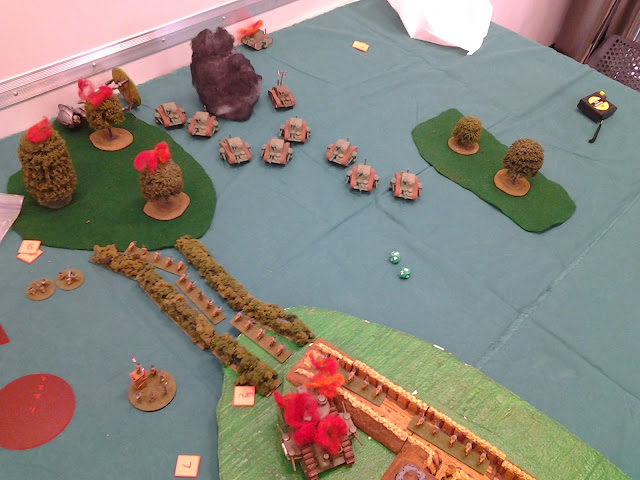 The repairs began immediately, but weren't finished. A courier brought orders for Colonel O'Malley. At long last the 29th
Division was being relieved. He was to fall
back to Drew and assume a defensive position until replaced. His forces would then rejoin the rest of the division to regroup and refit. At first the 21st Mississippi planned to stay behind and raid Panther Burn to try and kill the sphere. After finding out the swamps were so bad that only infantry types and maybe armored cars could get there, Major Fitzgerald called it a suicide mission and fell back to Drew along with the rest.

It is only a matter of time before the Martian attack to surround and destroy Vicksburg begins. Colonel O'Malley and the rest of the 29th will be waiting for them.

The special rule I used was that the martians had to get within sweep range of the tracks ( 10" or 15" ). I didn't want it to be too easy. The track was defense 3 and armor 8. Easy to hit but a little harder to destroy.