[Fritz and I are starting a short Battletech campaign, lasting 3 games. I've worked the fluff into the narrative below.  Each side chose their force blind - 6K BV spent anyway you like, although vehicles and infantry cannot hold objectives.]

The feast was magnificent, at least by Periphery standards. King Hendrik, the host, had gathered a rather unique table of guests. Official or unofficial representatives from nearly all of the Inner Sphere powers and all of the Oberon Confederation's neighbors, ravenous wolves feasting on mere food that would not slake their real hunger.  Placidia and the Confederation were remote, not much more than a Bandit Kingdom, but with the death of its most recent "king", the Oberon Confederacy was suddenly "in play". The new King, fresh from his coronation on Oberon, had called for a diplomatic summit to discuss the political future of his realm. Perhaps the bandits were starting to crave legitimacy after all...

Bordering both the Draconis Combine and the Lyrian Commonwealth, the Oberon Confederation's future was important to the Federated Suns, and a well-established diplomat, Duke Parsifal Eddington, was quickly dispatched. His military attache, a young man of aristocratic bearing, was unknown to the other guests. Captain Julien Laval was there officially to advise, but he had brought elements of his command, the 1st Argyle Rangers, along with him in case of trouble... or opportunities. 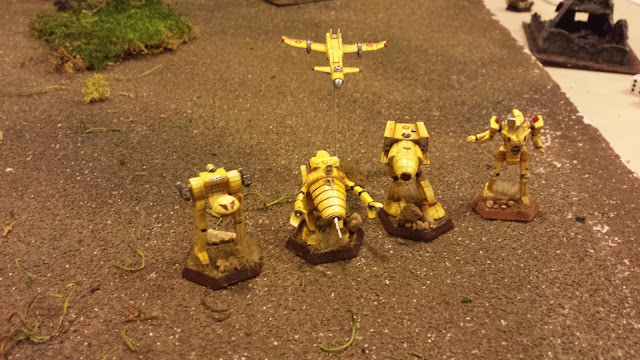 The capital city of New Water was protected by a non-aggression pact that all sides had agreed to. The countryside was under no such restriction, but the Rangers were not the only unit in town. Several powers had brought armed "diplomats" themselves, but it was the appearance of the "Dogs of War", a mercenary outfit with a reputation for gratuitous violence and unnecessary destruction. No one knew (yet) who had hired them, but whoever did was sending a clear message.  Placidia's future would not be uncontested. 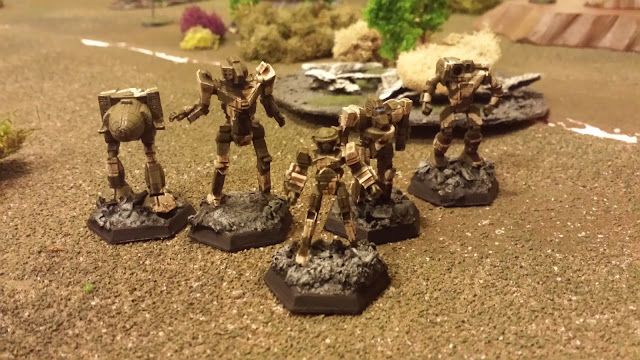 From the day they arrived, Julien Laval had put his people to watching them carefully. His aide-de-camp, Vanessa Morris, the daughter of one of his father's former courtesans and now Julien's unofficial Intelligence Officer, was perfectly suited for the task. Within two days of the Dogs arrival, she'd bought one of their communications officers, a disgruntled and bitter man who resented how much less he was paid than the mechwarriors and repair techs.  After buying the Dog's frequencies for surprisingly cheap, Vanessa had been listening in on all of their radio traffic.

When Julien saw her slip into the party, wearing what might have been one of her mother's elegant evening gowns, he knew she'd learned something important enough to interrupt him during the feast. She approached him nonchalantly with a glass of bubbly, as if she were just another guest making conversation. Julien excused himself from the dignitaries and they stepped onto the balcony.

"It's the losttech we've been hearing about," Vanessa said once they were alone, "I'm sure of it. The Dogs are sending out a strong force deep into the countryside with orders to hold a particular location and prepare some kind of cargo for extraction."

Julien nodded thoughtfully. He'd thought that the rumors were just that - after all what would a cache of Star League tech be doing out this far? Some say Kerensky passed this way on his exodus, but who knows...?  Still, he decided that if the Dogs were going to this much trouble, it would be worth it to thwart them and their mysterious employers. And if there was losttech, all the better.

"Tell Leftenant Brice to take a lance out to capture the site himself and to report back on what he finds there. The site is out far enough that this may take a while, and I don't want any reinforcements landing.  Therefore, contact the jumpship and tell them to send us Sergeant Howard with his Stuka.  Tell both of them that the priority is air superiority - even if the Dogs hold the site at the end of the day, I don't want them to be able to extract their cargo."

Vanessa didn't snap to attention like the others. She wasn't a soldier. Instead she gave a cunning little smile and slipped out of the party without another word. Julien turned back to the dignitaries with his apologies. 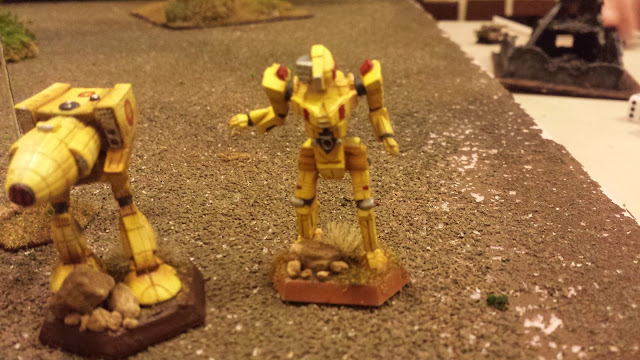 Leftenant Brice left immediately, strapping himself into his family's Grasshopper and leading a lance of the Ranger's Battlemechs out of the city just before dawn. They'd be seen, but no one would know where they were going. With a growl from above, the massive Stuka aerospace fighter could be seen entering the atmosphere to join them. 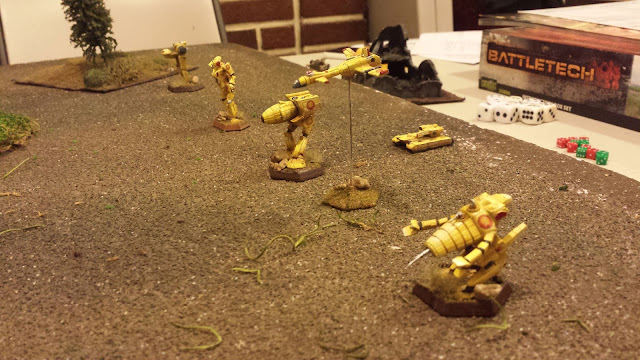 Moving quickly, they managed to arrive at the coordinates at the same time as the Dogs. And there, in the middle of nowhere on a periphery planet in the middle of nowhere, there were ruins with clear signs of Star League construction. One intact structure remained, surrounded by ruins and overgrown wilderness and hills.  Maybe the rumors are true? 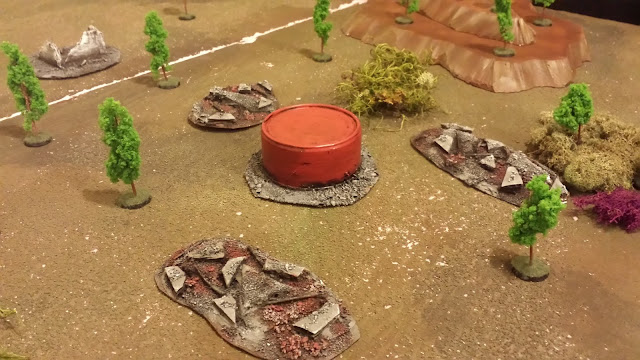 "All units, proceed forward cautiously." A Goblin tank had been fitted up with sensors and long range communication equipment. It was left well out of range as the main force advanced. [Each side had a "comm unit" that was considered a secondary enemy objective]. 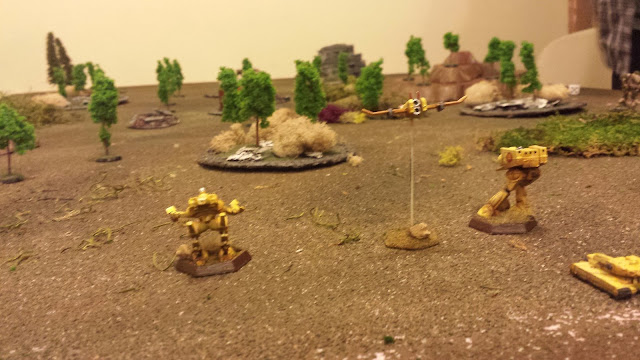 "This is Sergeant Howard - I have six bogies dead ahead. Five battlemechs and a Slayer aircraft." 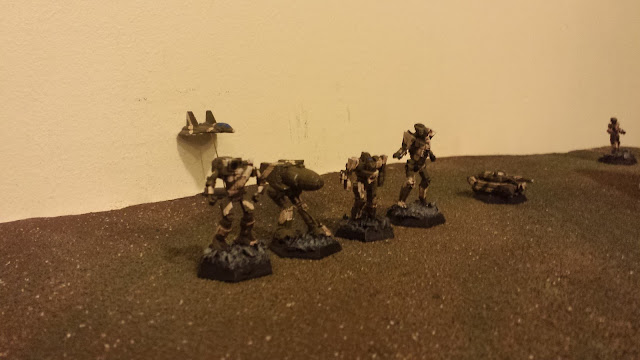 The fighters moved towards each other as the mechs slowly advanced.  It was clear that this would be an airshow for a while before the mechs got involved. 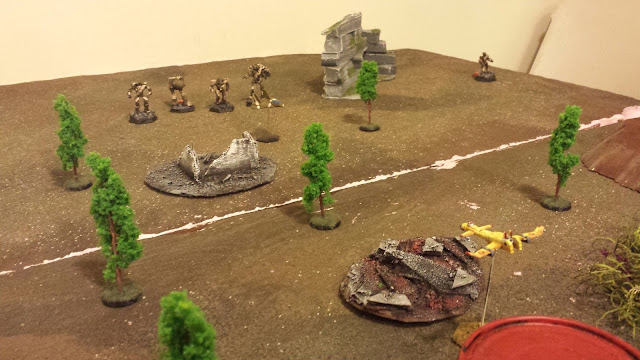 Brice kept his forces in a loose line to minimize the Slayer's chance of getting in a strafing run. 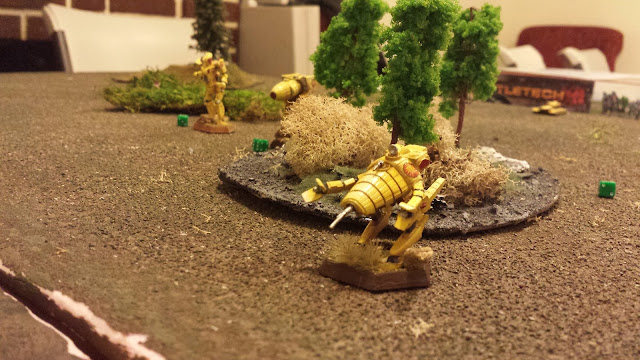 Sergeant de Caen in his Jenner darted off to the far right flank to contest the hills against the enemy Commando. The Slayer clearly had different priorities than the Stuka, making some passes against the Jenner and Grasshopper, but in the process taking terrible fire from the more heavily armed Stuka which did not for a moment let up its chase. 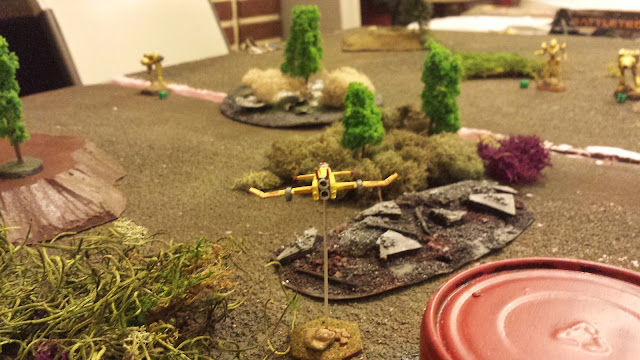 The Commando got to the hills first, and began trading fire with the Jenner. 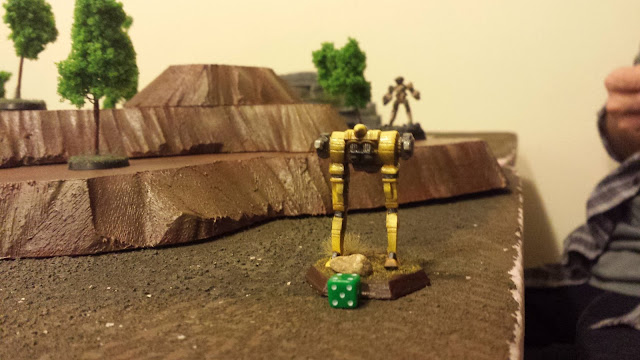 With the Commando's slight range advantage and equal speed, de Caen found himself hard pressed. The Jenner took some heavy damage while failing to damage its opponent. 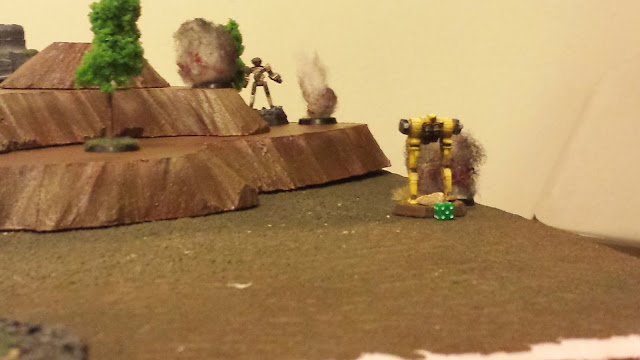 Meanwhile, the Slayer managed to slip the net for a moment, so the Stuka took an opportunity shot against the Hunchback's rear armor, tearing some sizable holes in it.

Lt. Brice chuckled to himself listening to the angry panic of the Dogs as they found each order was countered by the Davion force.  Finally, they wised up and changed frequencies.

[We made up the whole stolen frequencies thing because Fritz lost the first four or five initiative rolls in a row.] 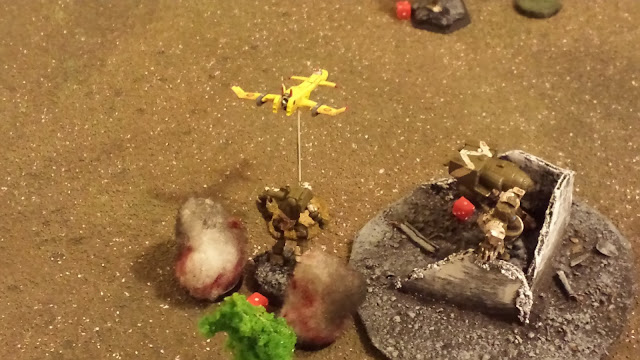 The Slayer doubled back to finish off the Jenner managing to blow off one of its legs and sending the mech tumbling to the ground. Lt. Brice, moving to assist, watched with some admiration as Sgt. de Caen managed to use his jump jets to guide the mech down without further damage (aka he made his pilot check). It's weapons were intact, despite being prone, but the Jenner was more or less out of the fight, unless something got real close. 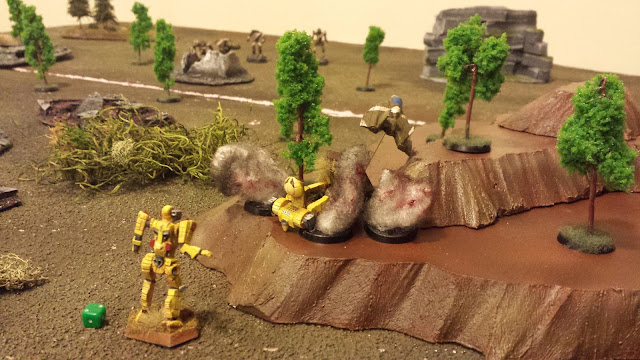 Seeing the Slayer turn to attack the Jenner, the Stuka executed an age-old Immelman maneuver, and as it moved to engage the enemy plane, took a shot at the Commando's back. The fast-moving mech proved hard to hit, but what did connect damaged some internals, and anyone in sight could see the mech moving in a halting, jerking fashion from the damage. 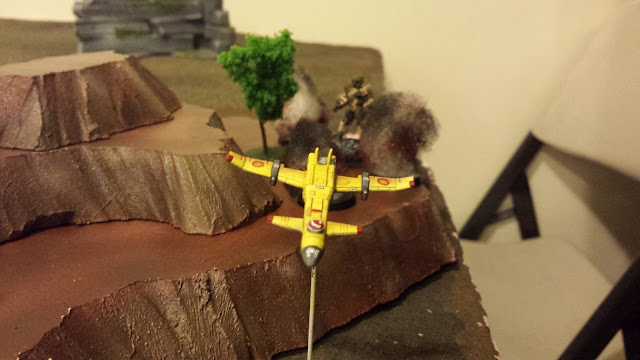 The Slayer likewise turned end over end, doubling back to finish the job on the Jenner. It's lasers sweeping over the mech's center torso, de Caen was forced to eject from the smoking ruin.

However, the return fire from the prone Jenner, the Grasshopper, and most importantly, the Stuka which was able to line up a shot as the enemy entered his attack run, heavily damaged the rear of the Slayer and sent it wildly out of control. [The Slayer took over 60 points of damage and failed its pilot check]. 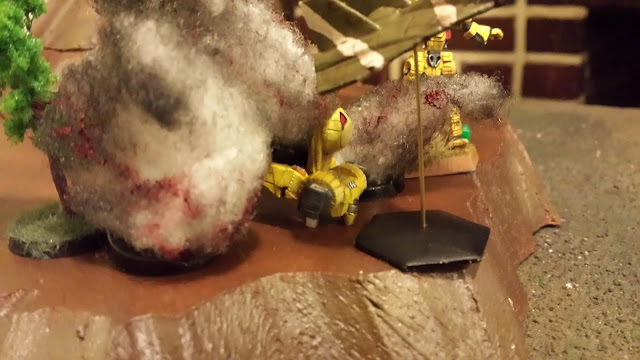 Meanwhile, the Dog's cautious advance had stalled. They'd hoped to charge forward at the last second to dislodge the enemy, but by the time the slow mechs were in range, the Argyle Rangers had taken up position in cover around the objective. 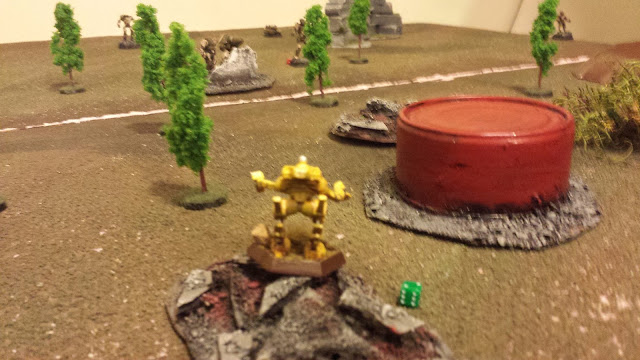 [The scenario called for a "fame point" for every 50 tons of mechs within 6" of the red building on turn 8. Fritz realized that even if he pushed his mechs forward to brave the fire from the Crab, Stalker, and Grasshopper, he wouldn't reach it in time with enough tons to make a difference.] 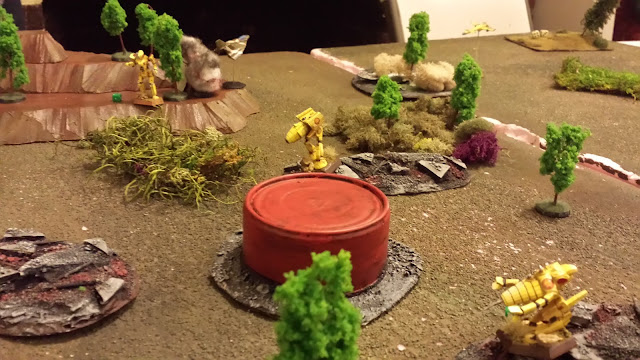 The Dogs, seeing the objective securely in Davion hands, ordered a withdrawal. 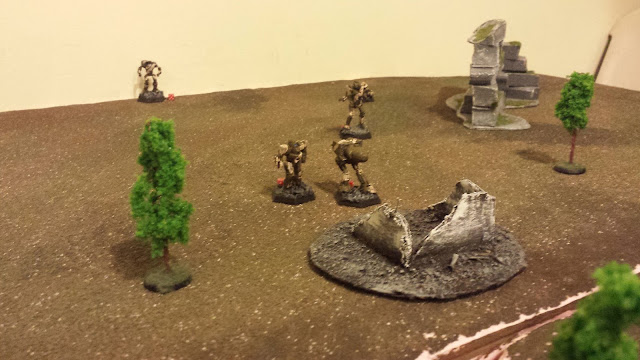 Sgt. Howard meanwhile pressed his advantage against the enemy Slayer, which was flying erratically trying to regain control. Howard's Stuka slid into the enemy plane's kill slot and fired. The constant fire prevented the enemy pilot from righting his plane, and is soon lost all of its momentum, stalling and beginning to fall from the sky. 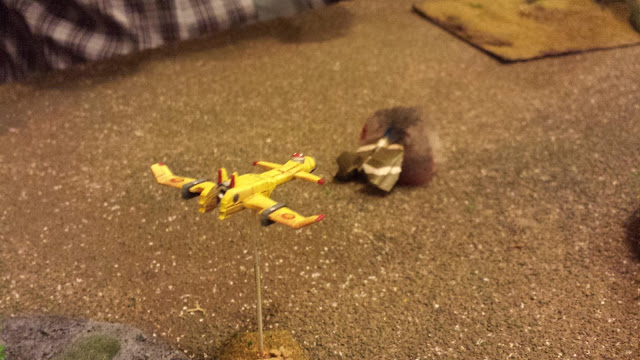 On the very last turn, with the Dogs withdrawing, the Slayer was left alone, falling from the sky. Sgt. Howard moved in for the kill and opened up with all his weapons, heat be damned. In a fury of laser and missile fire, the Slayer crashed to the earth in a heap of flaming wreckage. 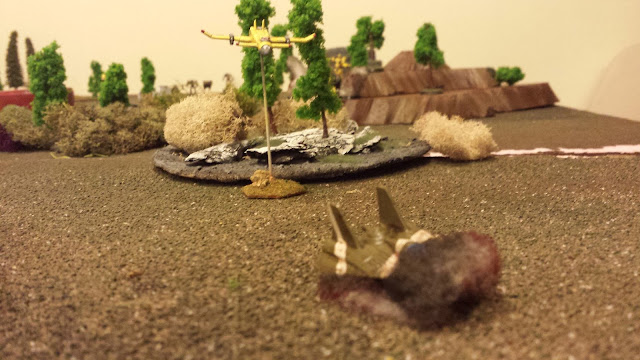 The objective secure and full air superiority achieved, Brice watched from his vantage as the enemy Commando limped away. 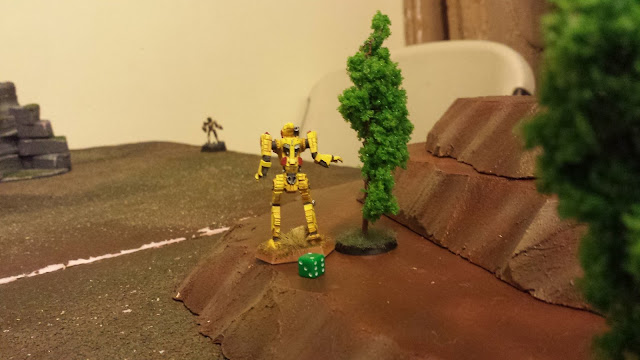 ...along with the rest of the Dogs of War.  Lt. Brice patched himself through to the capitol.

"Ms. Morris," he said, "kindly tell Captain Laval that we have captured a ruined Star League structure that appears to contain some sophisticated computer systems. We have achieved complete air superiority, so extraction via dropship should not be a problem.  Sergeant de Caen was forced to eject from his destroyed Jenner. He's fine, and we'll be sending him and what's left of his mech back to the city. There may be more tech out here, so I request permission to continue to press the advantage and explore." 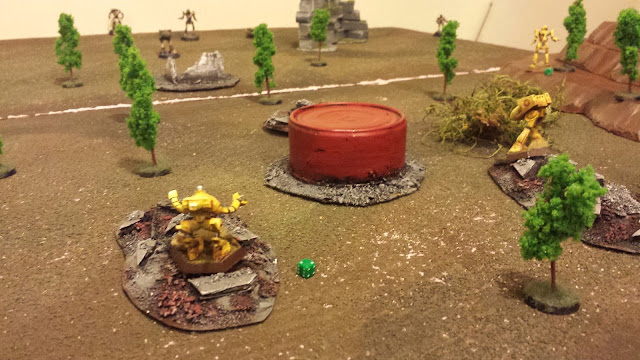 The Dogs of War had withdrawn too quickly. Perhaps they knew of easier pickings? Brice intended to find out.  However, the fact that he was now facing five mechs with only three of his own concerned him, despite the fact of his air superiority and the sheer strength of the Stuka. Would it be enough? 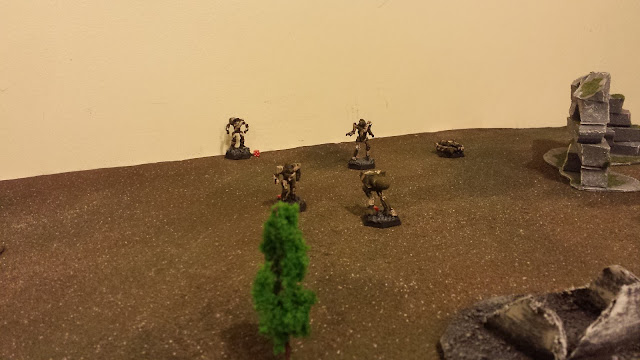 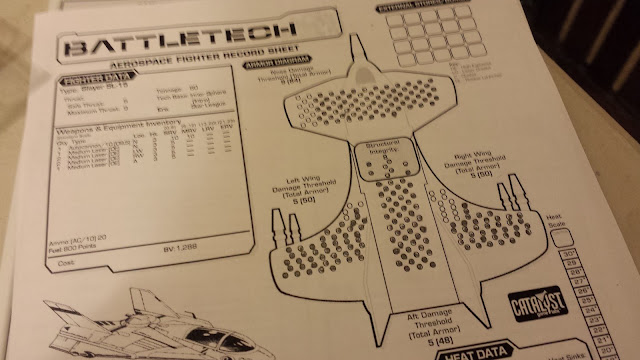 Meanwhile the Stuka got off rather easily. There's enough scrap to repair it completely before next game. 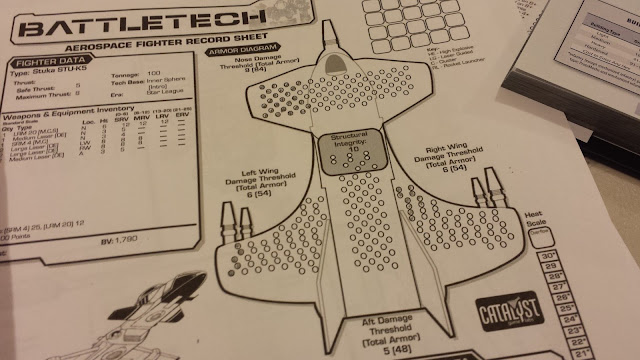