A Trap for the Slavers


Tracking the slavers back to their base, the 1st Argyle Rangers hope to rescue the captured population of Calish III and destroy what has turned out to be an extensive criminal operation.  However, preliminary scans of the planet show that this remote outpost contains a fortified base as well as a sizable slave camp. In an effort to draw the slavers out of their base, Captain Laval decided to try a ruse.

On Calish one of the Ranger's planes managed to decapitate a Dogs of War Cyclops mech in a single lucky shot. It didn't take much work to weld some scrap into the shape of a head and attach it.  Then Ms. Morris, the Rangers' Intel Officer, faked a transmission from the Dogs of War (using their captured IDs and frequencies) suggesting that the notorious outfit was in the market for slaves.

Always eager to make a profit, the slavers agreed to a meeting on their outpost planet. But as eager as they were they weren't traveling light... 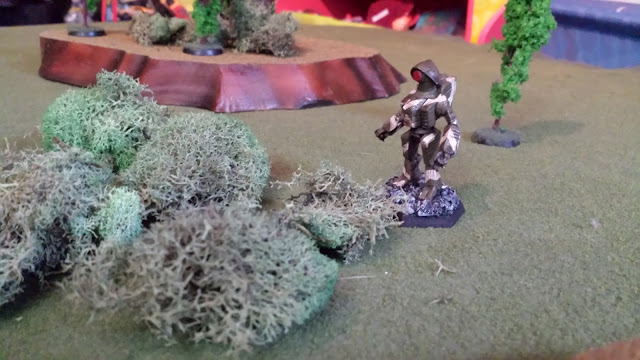 Captain Laval placed Lt. Felix in command of the ambush, and now his Catapult mech was crouched within a forest not far from the propped up Cyclops.  Seeing the fairly heavy firepower approaching he felt a glimmer of worry.  These were supposed to be some typical Periphery slavers fielding hundred year old tanks and maybe one run down light mech, not a heavily armed patrol. But the die was cast. He and two other mechs were hidden in these trees and Sgt. Howard's Stuka spacecraft was in low orbit waiting for his signal. 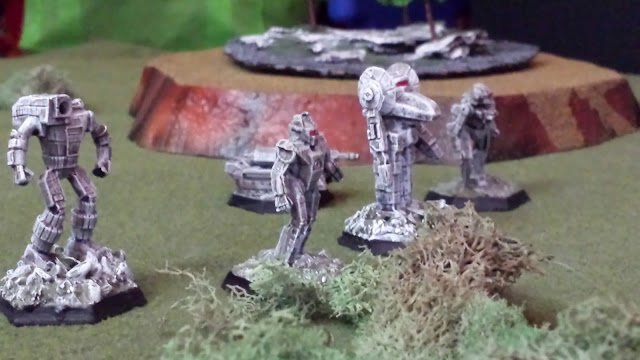 The pirates approached cautiously, chatting with the Intel agents posing as Dogs of War mercenaries and channeling signals from orbit into the disabled Cyclops. 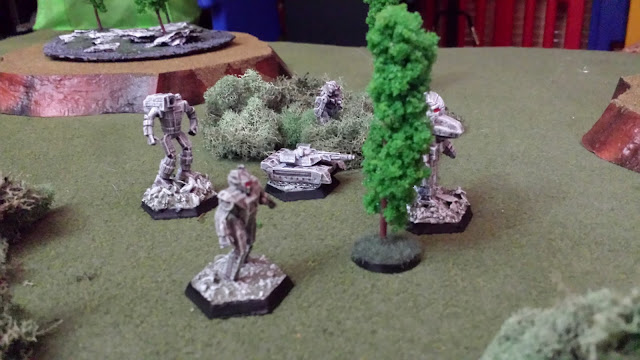 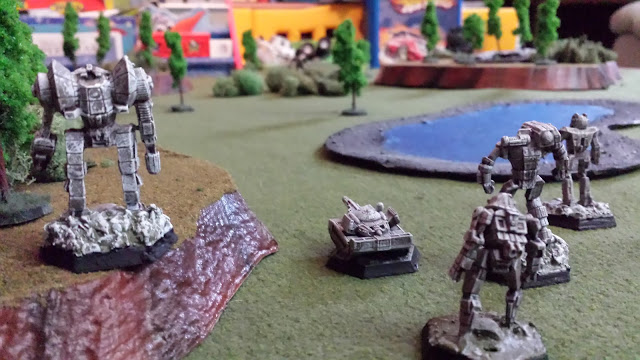 With the slavers in visual range of the Cyclops, Lt. Felix signaled his air support. As Sgt. Howard fired up the Stuka's engines, he couldn't help but give away his presence to the enemy. The mechs on the surface received a warning from their base of activity in the upper atmosphere, but they hadn't yet even begun to expect a full Federated Suns presence so far from the border. 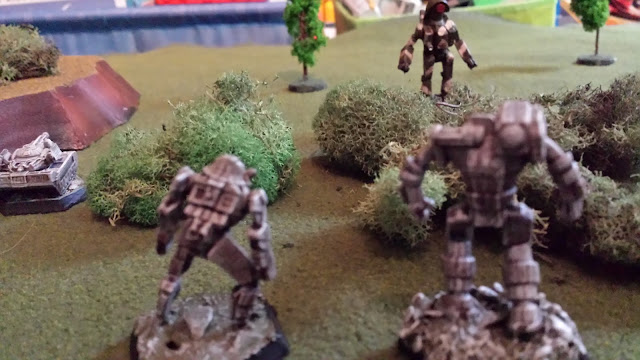 As the slavers slowed their advance, their commander in a Dragon mech moved to investigate something seen in the forest... and at that moment three bright yellow mechs rose from the foliage and opened fire! 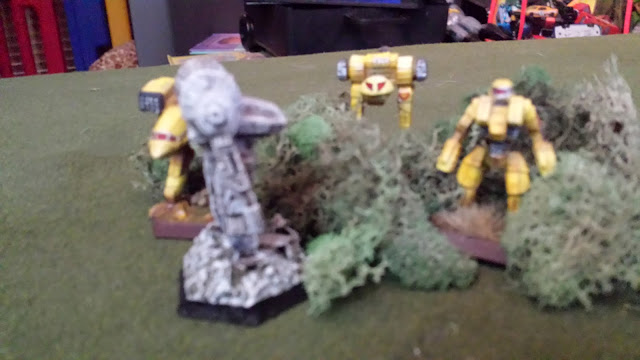 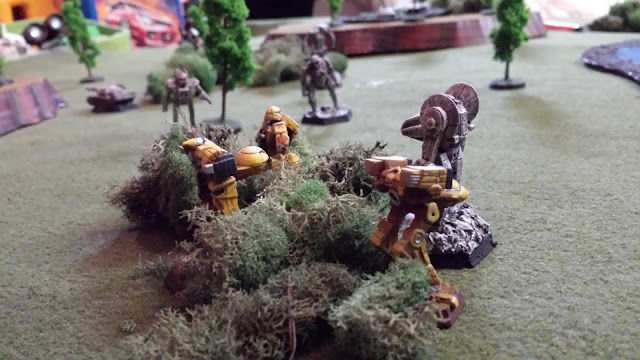 The Dragon survived the initial onslaught, and his compatriots turned instantly from the diversion to help their commander. 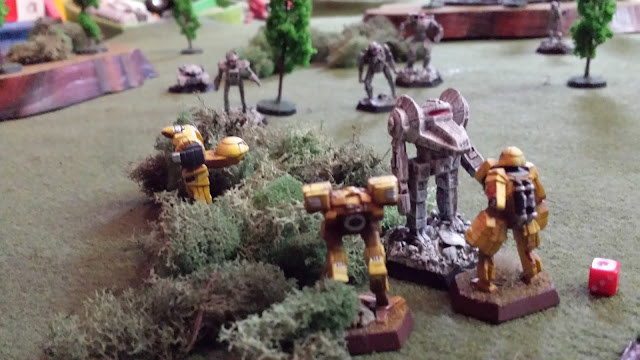 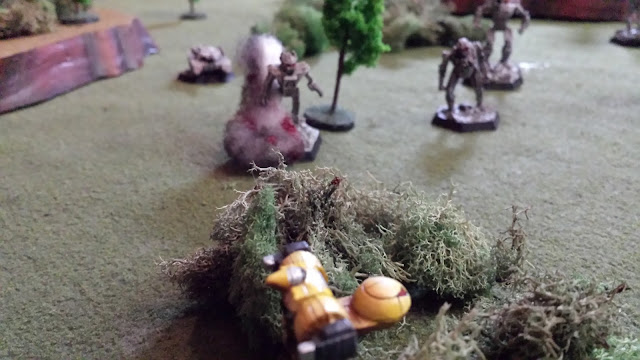 The light mechs concentrated on the Dragon, while Lt. Felix made use of his Long Range Missiles to pepper the approaching enemy. 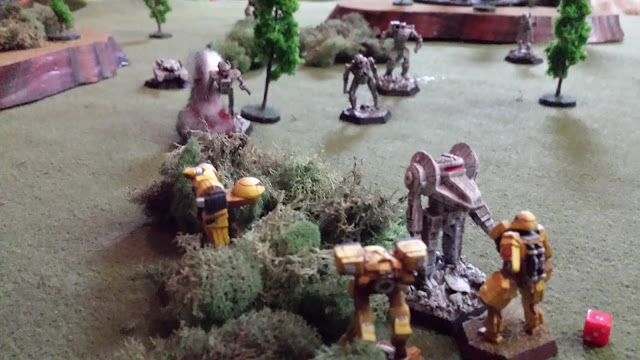 The Dragon wisely withdrew from the mix while the other mechs gave chase.  Sgt. Dawson jumped his mech directly behind the dragon hoping to break it's rear armor but the mech just would not fall.  Meanwhile Sgt. de Caen's Jenner used its speed to keep its distance from the rapidly approaching enemy. 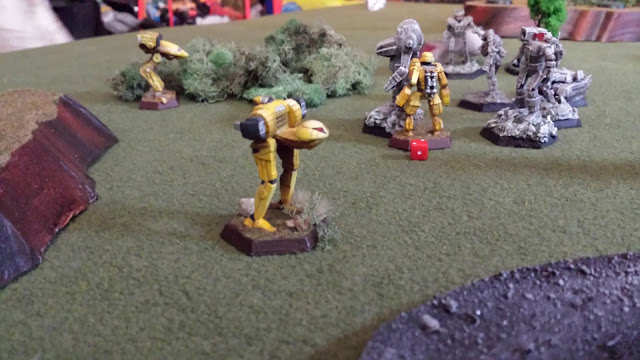 Sgt. Howard's Stuka descended to the battlefield just in time to catch a line of mechs clustered together with a strafing run. 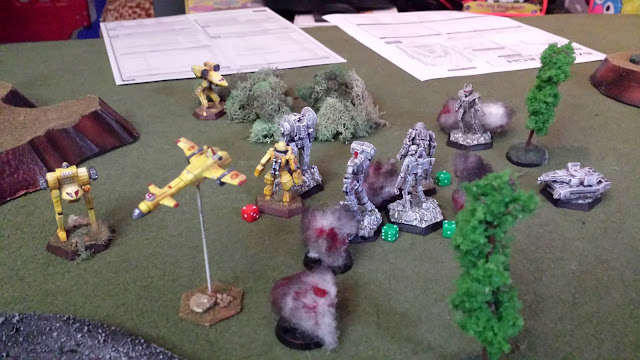 Unfortunately, the powerful plane's guns weren't enough to fully break up the formation. Lt. Felix, realizing that the ambush was quickly going FUBAR, ordered the mechs to scatter and try to separate the enemy to destroy them in detail. Bravely, the Lieutenant drew back behind the hill, pulling the majority of the enemy with him, allowing the others to deal with those that were peeled off. While Lt. Felix held them off, the others targeted a lone Hunchback. 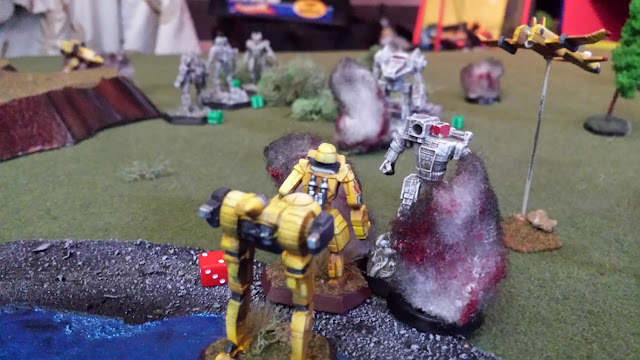 "I'm going to keep them occupied as long as I can," he said to his fellows, "finish that Hunchback and give me a hand!" 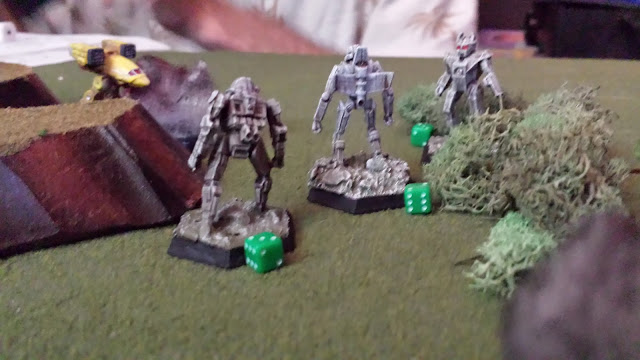 "Roger that, LT," de Caen said as his lasers tore through the enemy mech's legs, sending it face down into the lake, "We still have this Dragon to manage as well..." 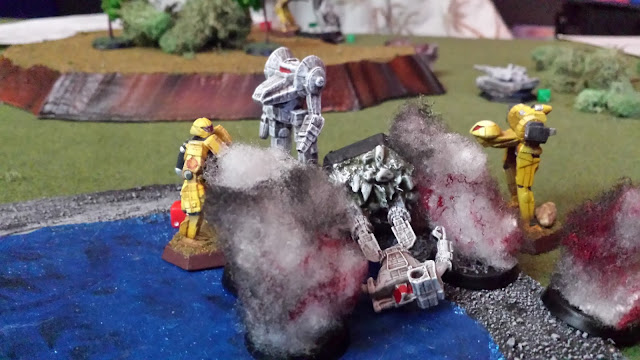 "Forget the Dragon and give me a hand," Felix shouted over the radio, "I've got enemy mechs all over me and I can't-"

A sharp crack and then static over the open channel. Lt. Felix's radio was still transmitting, but Felix was not. A solid hit to the cockpit's armor had knocked him out cold.

With no answer, he turned his Jenner to rush to his old friend's aid, watching as three mechs and a Rommel tank pounded the immobile mech mercilessly. 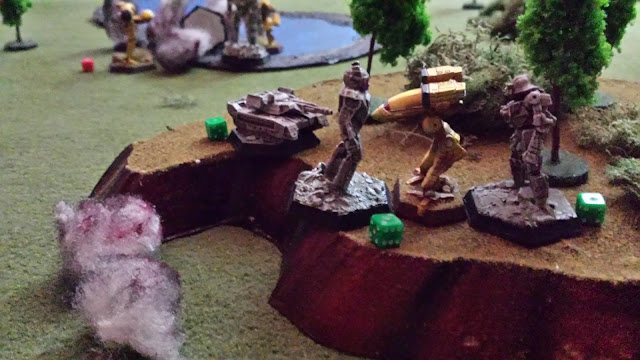 Sgt. de Caen reached the hill just in time to watch the enemy take careful aim at his C.O.'s cockpit and murder him in cold blood. 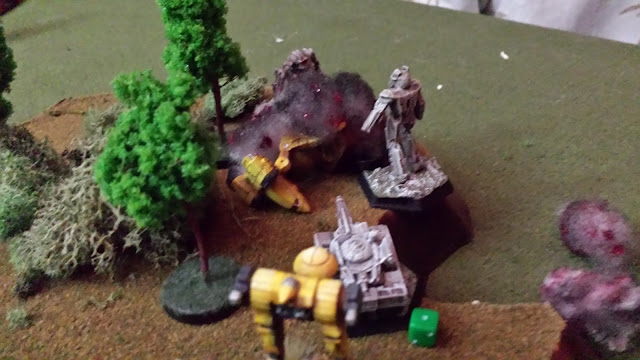 "This is Sgt. de Caen to all Rangers - Lt. Felix is dead. I'm assuming command.  Target priority is the enemy commander, piloting the Dragon. Lets break down their command and control and try to salvage this mission!" 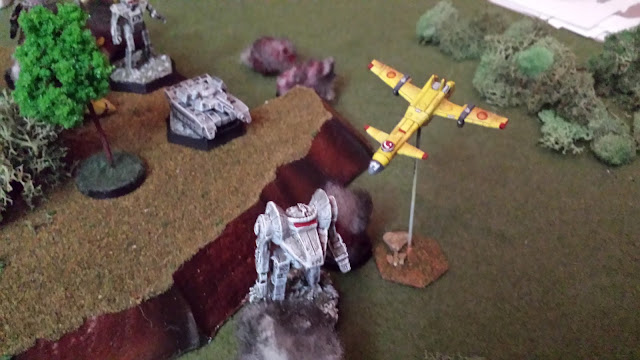 The Dervish received the brunt of the return fire, and the Dragon took its legs out from under it, forcing it down. Thankfully Sgt. Dawson was able to eject before the cockpit submerged. 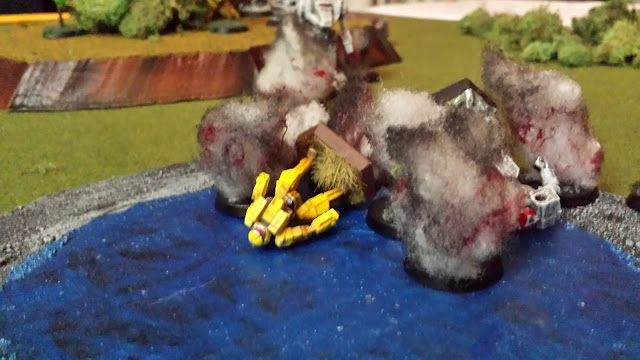 Suddenly, Sgt. de Caen felt very much alone, with only the mighty Stuka backing him up from above. 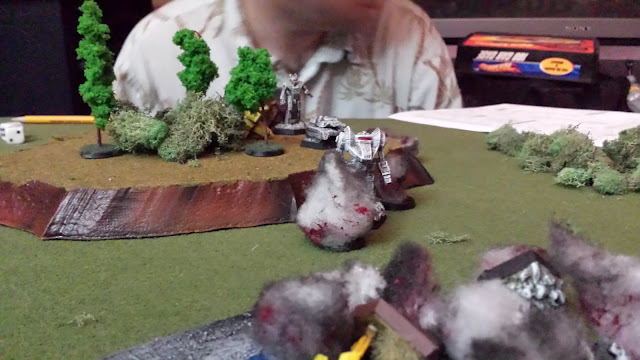 Using the Jenner's speed, de Caen whipped about dodging all oncoming fire. As he ran around the hill, trying to separate the slow from fast mechs, one of the enemy mechs tried an ill-advised "death from above" attack.  The Jenner easily side stepped the attack and de Caen laughed bitterly as the enemy mech lost control and landed on its head. He wondered why the slavers were so reckless. Profit motivated mechwarriors didn't typically engage in such insanity. 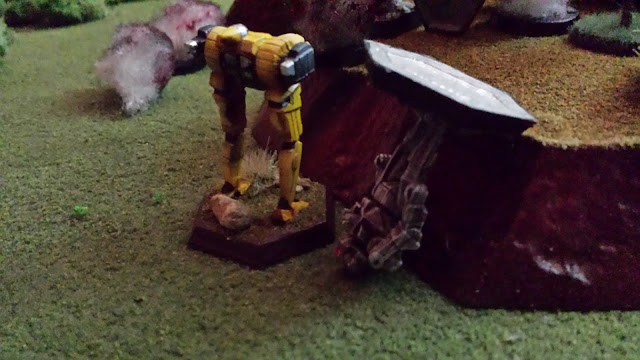 Meanwhile Sgt. Howard was finally able to finish off that stubborn Dragon. 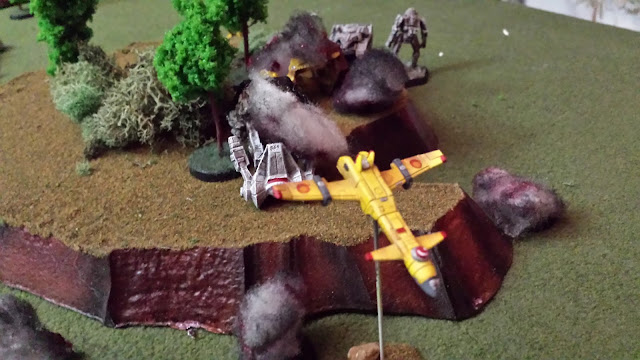 "This is Sgt. Dawson - I need help!  I've been spotted by the enemy."  The downed pilot ran for his life, but couldn't come close to matching the light mech's speed. 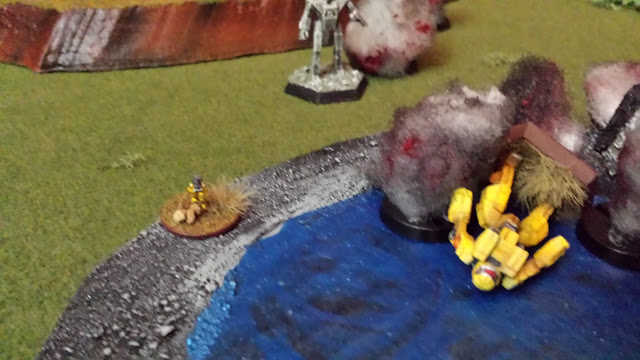 A metal hand stretched out, passing only inches over the pilot's head.  Dawson rolled to the ground. Hearing the screech of the Stuka's approach he threw himself behind a pile of rocks as the plane unloaded its payload on the slaver. 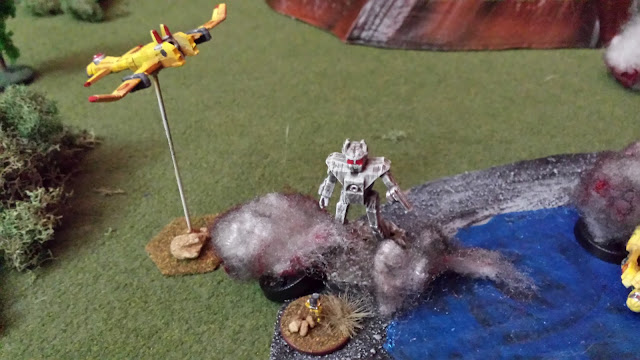 The attack was enough to bring the mech down into the lake, joining the two others already half submerged.

"Thanks, Howard," he said, feeling the heat of the burning mech on his face. 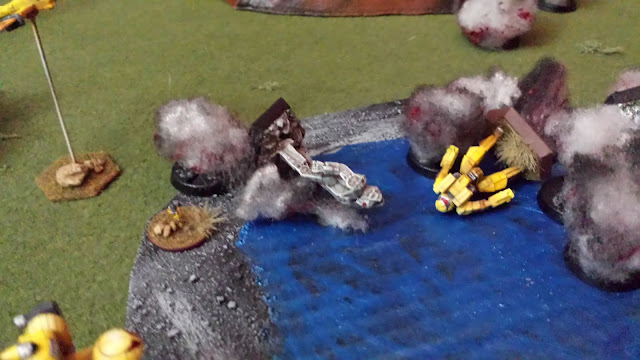 Moments later, de Caen's Jenner was able to pick him up. 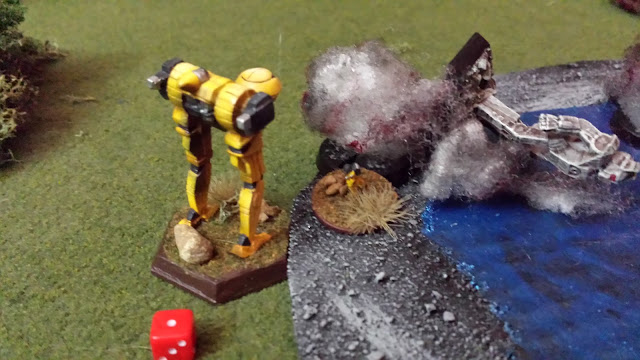 Now only a single Rommel tank remained of the enemy, but despite another attack run from Sgt. Howard, they were unable to stop its escape. 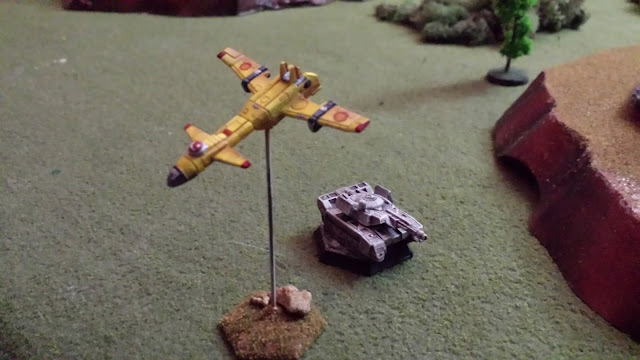 "Captain Laval," de Caen said over the radio, "This is Sgt. de Caen. Lt. Felix is dead, and Sgt. Dawson's Dervish is sinking into the lake. We've taken the field but the element of surprise is passed.  Sir, I don't think these are typical slavers. Something about this isn't right. Their equipment is too new, and they fought like fanatics. Requesting air lift and salvage operations as soon as practical."

"Confirmed, evac and salvage, ETA ten minutes," Laval said from orbit. He didn't address the rest of the message. The lance sent should have made quick work of the slavers.  He'd heard of slavers using some shady performance enhancing drugs that could result in fearlessness and unpredictable behavior.

"Vanessa," he said, radioing his Intel Operative, "I want you with the salvage team. Check out the enemy cockpits. I want to see if they were on any kind of cocktail. And anything else strange you might find. I want details."

Captain Laval let the radio go silent and turned his attention to the orbital images of the slave camp, his next task. 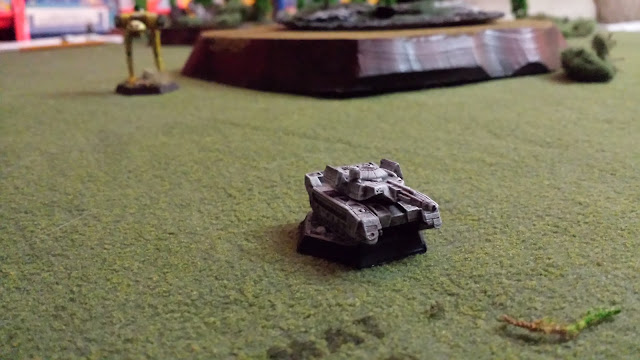