No one said taking out the slavers would be easy, but it was looking like the 1st Argyle Rangers may have bitten off more than they wanted to try to chew. These weren't the usual Periphery trash fielding battered tanks and hovercraft with maybe a few half-functional battlemechs. No, they were clearly an organized force with near-fanatical morale. The Rangers hadn't seen anything like it. 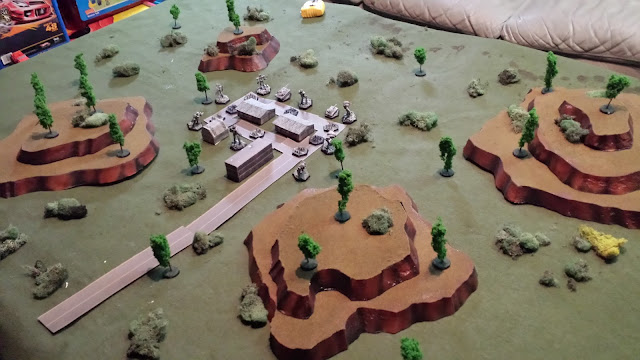 The toxicology report from the slavers killed in the first battle indicated the presence of some potent and expensive drugs in the pilot's system that could account for some of their erratic behavior, but nothing found explained how they could afford the drugs, let alone the mechs.

Now Marissa Howard-Davion, having received a battlefield promotion to Lieutenant after the death of Lt. Felix, has been put in charge of a lance and tasked with liberating the main slave encampment a few miles from the slavers' main base and spaceport.  Aerial photography indicates a strong detachment of light and medium mechs along with tanks for support. [Note the infantry stands at the base represent groups of slaves with a few keepers among them, not enemy infantry] 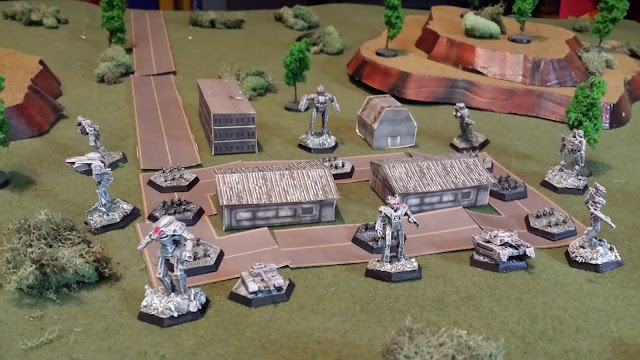 Riding her Stalker to battle once again, Marissa had a strong and flexible force with her. Her long-time friend Paul Fitzroy in his Crab, Gustav in his Jenner, as well as an LRM carrier, an infantry company (along with VTOL transport) and a Stingray fighter groaning with the weight of 12 cluster bombs. Her plan was simple: try to lure the defenders away from the slaves and then insert the infantry to free them from their keepers. [scenario rules called for the Rangers to take possession if within 6" of a slave stand] 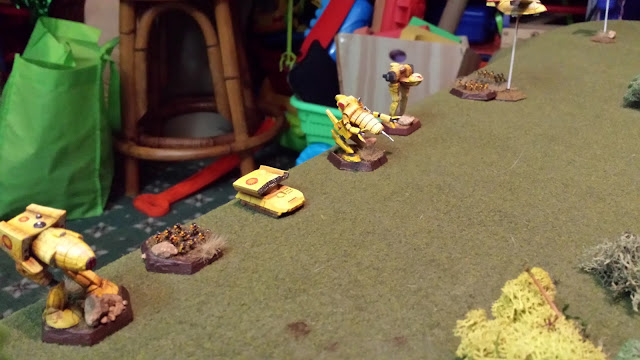 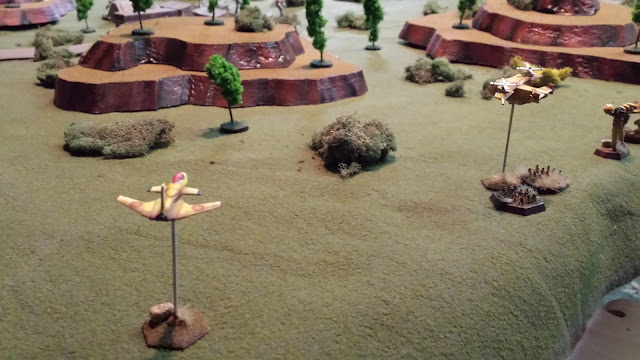 "What they hell are they doing?" Paul shouted over the radio, "They're charging?"

"Looks that way," Marissa said, "Good, let them come to us.  Hold your ground and take cover among the trees."

The enemy was advancing down a narrow alley flanked by two hills. If they bunched up just a little more the air support could do some serious damage with its bombs... 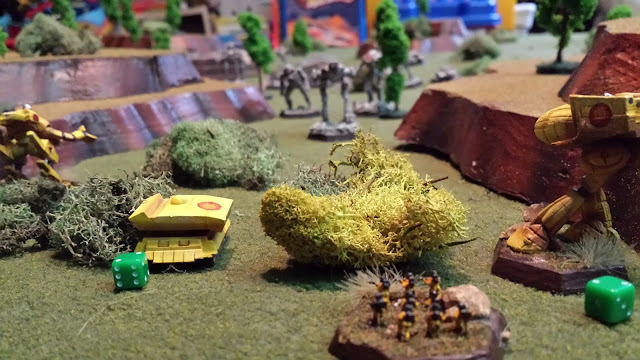 Leaving their precious slaves behind, the slavers abandoned the cover of the camp and rushed to encounter their enemy. 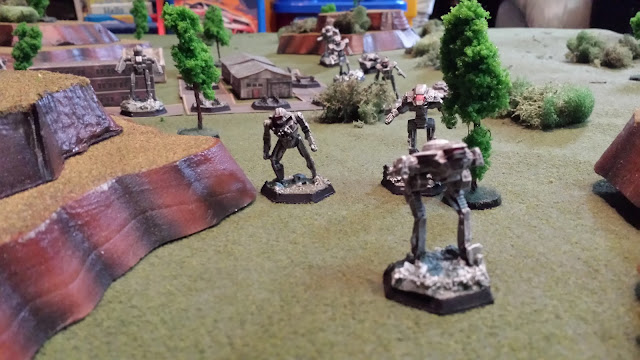 Meanwhile the stingray made some passes trying to soften up some of the slower mechs lagging to the rear. 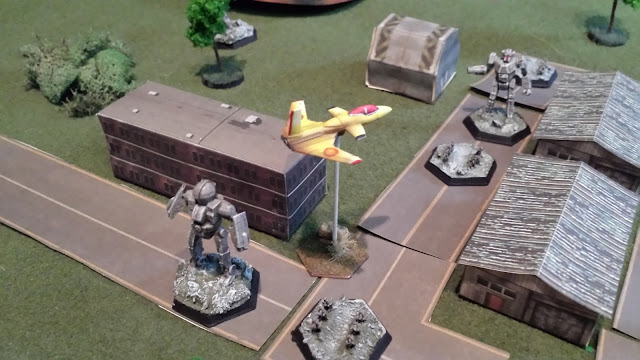 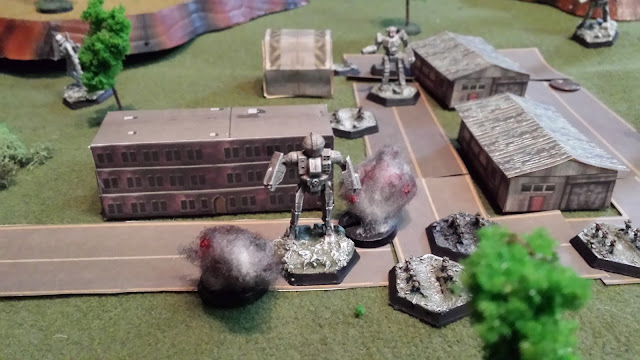 With the entire enemy force (excepting one Spider) rushing headlong at them, Marissa signaled the infantry to deploy along the escape route of the slavers. To retain the slavers, the slavers would have to evacuate them in the direction of the base.  An infantry platoon deployed into a lightly wooded area, rappelling down from the helicopter on zip lines. 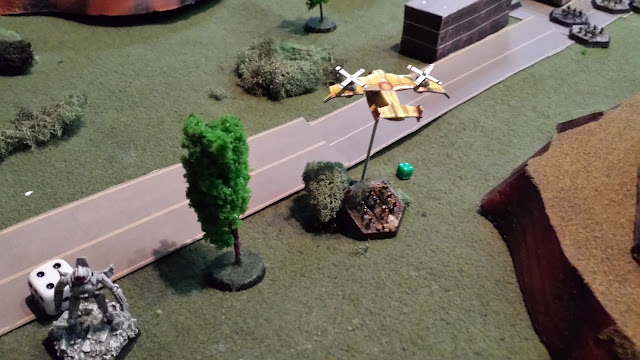 The slavers were quick to engage, and rushed towards Paul's Crab, trying to overwhelm him.

"Hang on Paul, we've got your back," Marissa said. LRM fire from both her mech and the LRM carrier heavily damaged the enemy mechs, but the damage was scattered and it failed to quickly bring any of them down. 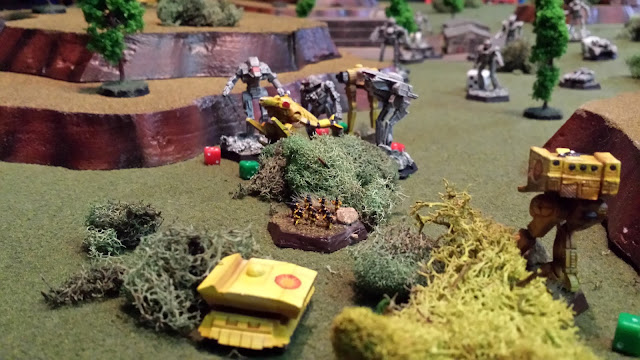 It soon came to physical blows, with Paul desperately kicking and the lighter mechs pummeling him. 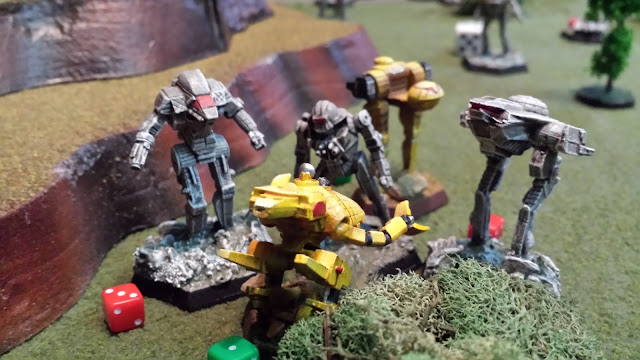 Finally, the combined fire brought down the Cicada, but Paul's Crab had taken massive damage in return.  Given the speed of the light mechs, withdrawal would be difficult, and Marissa knew that Paul would resist if ordered to pull back. As Paul tied them up at point blank range, missiles from her Stalker and LRM Carrier combined with surprisingly effective laser fire from the jump infantry into a terrifying display. 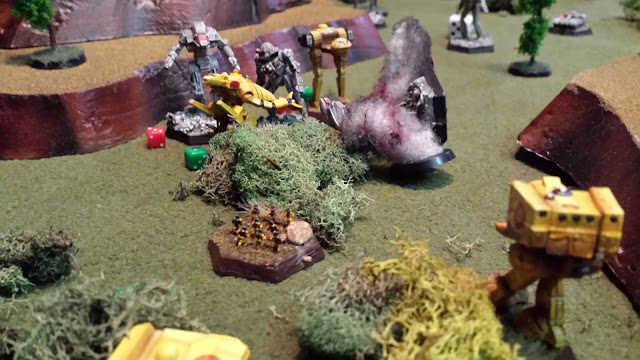 With reinforcements on the way, Gustav was forced to move his Jenner to higher ground, coming face to face with the enemy Spider. Given the speed of the mechs, neither was able to damage the other in the inevitable exchange. 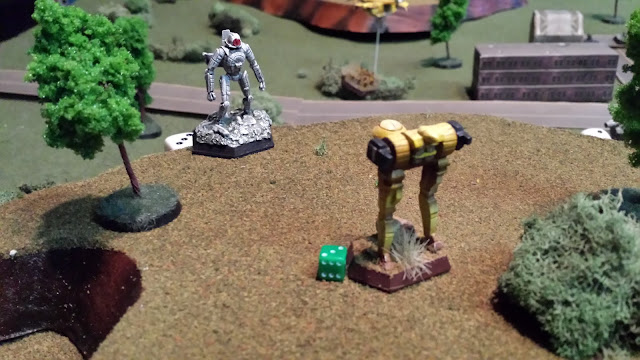 The infantry by this point were in place, cutting off the enemy entirely from escape. They wouldn't be able to hold off the enemy mechs if they turned towards them, but that seemed unlikely given what was happening around the Crab. 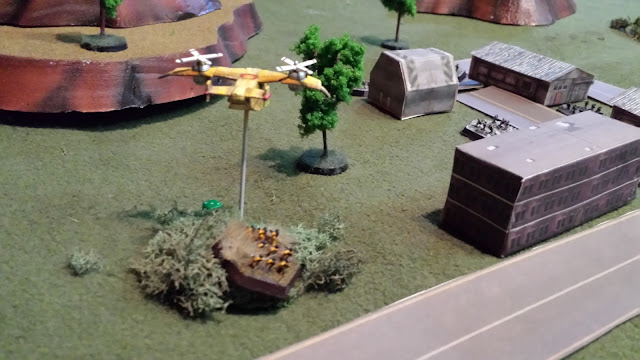 With more enemy units pouring through the gap in the hills, the Stingray finally had an excellent shot. Two mechs and a Scorpion tank were close together as they approached Paul's Crab, the perfect target for 12 cluster bombs. In a thunderous explosion, the tank and the light mech were consumed in flame, although the enemy commander in his Quickdraw still stood. 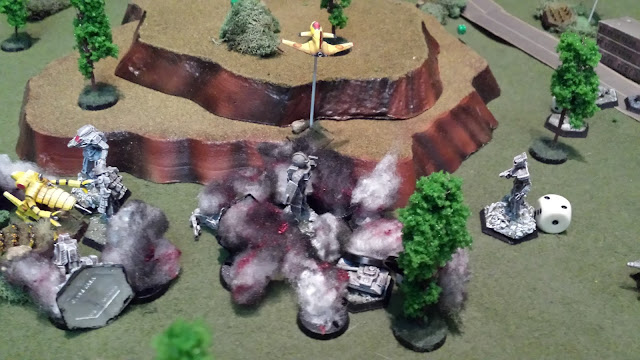 Emerging from the flames, the Quickdraw added its fire to the many attacks on the Crab. 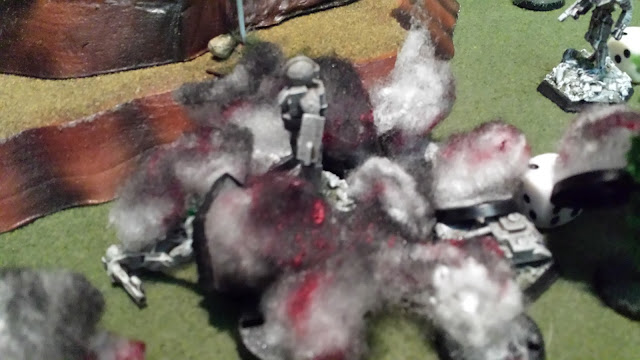 In the end, however, it was the Assassin that ended it, putting its fist through Paul's cockpit.

Marissa shouted aloud in rage and grief as she watched her friend's mighty mech fall, turning her Stalker's guns on the enemy. 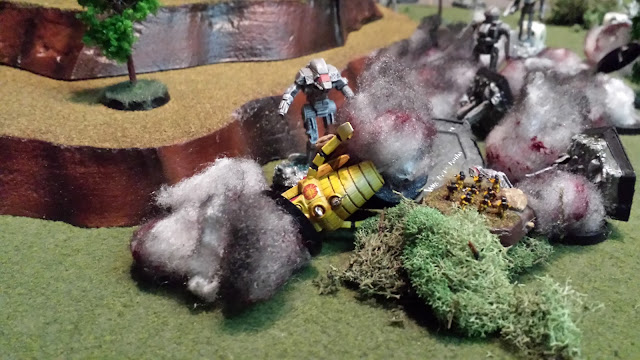 Meanwhile the transport landed in a field near several groups of slaves. As hoped for, the presence of the Davion transport beckoning them caused the slaves to rebel and kill their wardens.  Paul's sacrifice will not have been in vain. 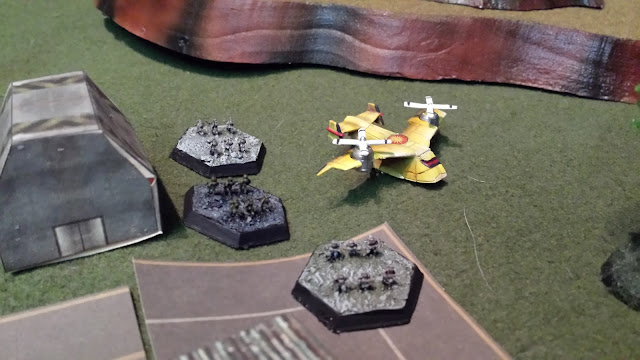 By this point, the gap in the hills was near overflowing with flaming hulks of metal.  Numerous enemy mechs lay scattered about the fallen Crab. 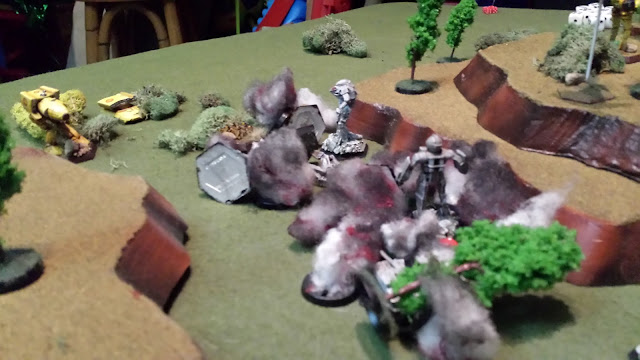 The Assassin, perhaps drunk on glory, decided that killing just the Crab wasn't enough, and rushed straight at Marissa. She allowed herself a grim smile as she welcomed the near suicidal move. 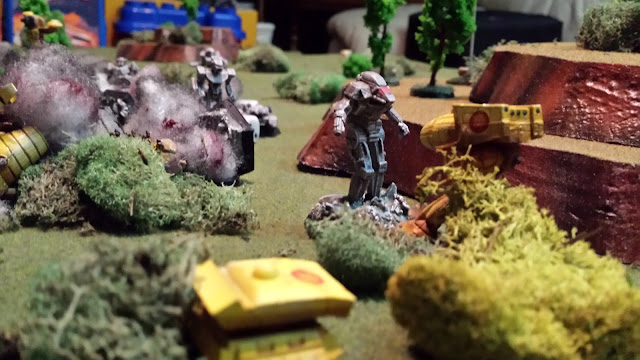 After exchanging close range fire, Marissa lifted the heavy hoof of her assault mech and put it straight through the Assassin's thigh, sending the mech crashing to the earth. 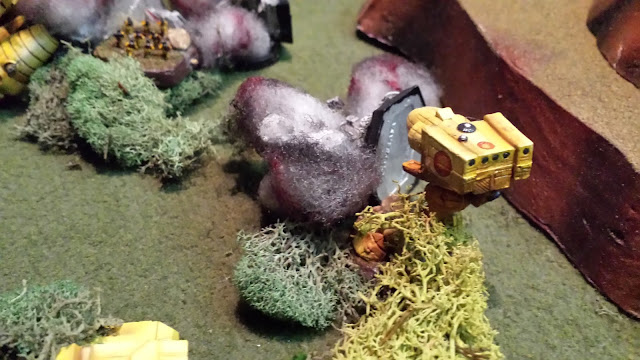 Yet still they came... 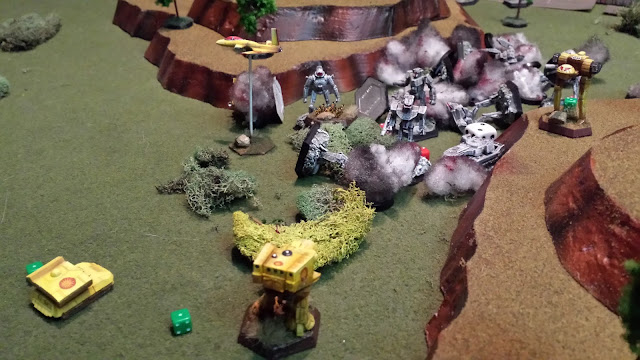 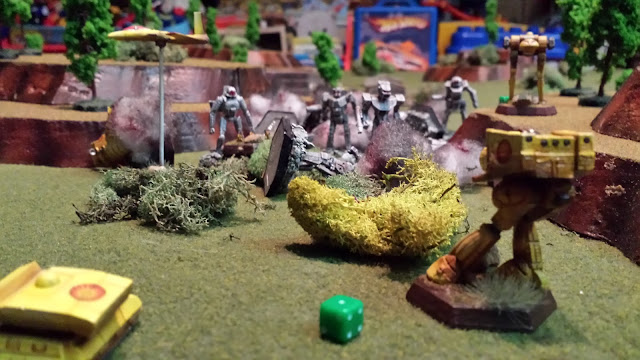 Most of the remaining mechs were light and relatively weak, but among them was a Patton tank with a dreaded AC-20.  Maneuvering around it, Marissa closed the range on the other mechs. 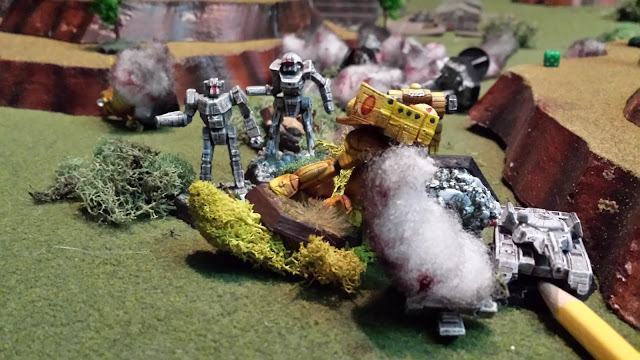 Turning it's turret, the Patton annihilated the LRM carrier with a single shot to it's front armor. 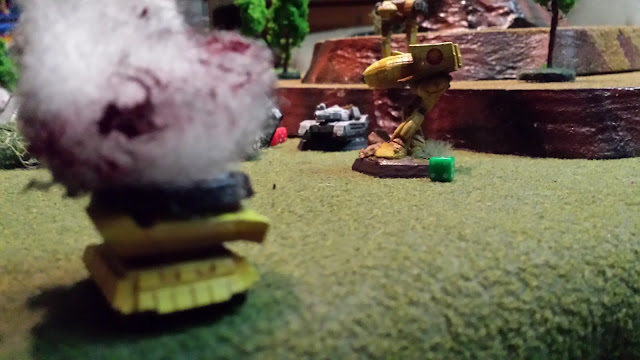 It wasn't long before the light mechs had fallen to the mighty Stalker (with help from the Jenner). 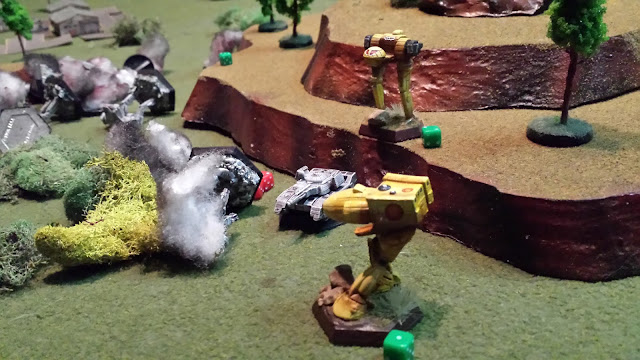 At that point, whatever psychopath was commanding the Slavers finally give the recall order. The Spider sprinted away along with the enemy Clint, but the Patton's slow speed doomed it.  A costly victory for the Rangers, and a tremendous personal loss for the most of the Battalion's mech pilots who'd known Paul Fitzroy for years.  While everyone acknowleged that he had died for a worthy cause, the battle had now become personal, even for the otherwise distant Captain Laval. 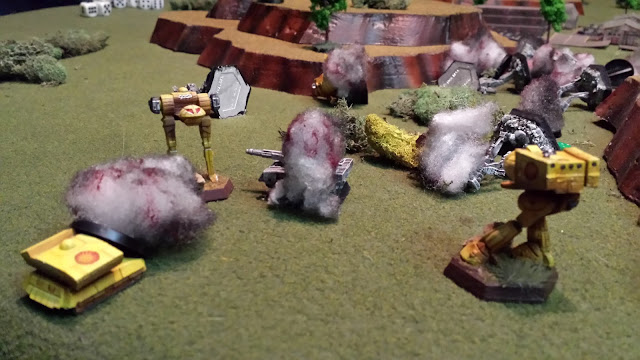 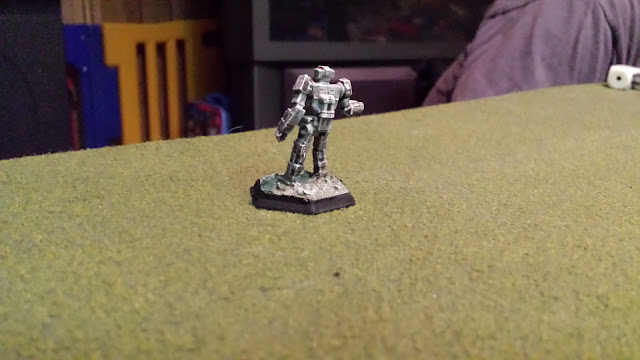 Back at the drop site, Marissa gave her report to Captain Laval, practically begging him to let her avenge her friend in the final assault on the slaver base.


"They killed Paul."
"I know."
They killed Lt. Felix too. Put a PPC to his cockpit while he was out cold. They knew it too, the bastards."
"I know."
"Then why?"
"Your mech is too damaged. You'd be a liability out there." His coldness made her want to tear his eyes out.
"It's cosmetic, god damn it!  Not so much as a dent to the superstructure and internals. Just some banged up armor."
"There's not much armor left." Captain Laval said levelly, "The techs tell me there's visible buckling all along the right leg, and damage to the major weapon casings in the upper body. Look, Marissa, I share your feelings, I really do. But I can't let you go in there. These slavers aren't the usual Periphery trash. Felix and Sgt. Fitzroy died precisely because we underestimated them. We're attacking their base, and we can expect to take heavy fire. You'd get chewed up in the first few minutes. I can't let that happen."
Sgt. Fitzroy, she thought, he can't even call him Paul anymore.
"At the same time, Lieutenant, I remind you that I'm not accustomed to a pilot of your rank demanding assignments from me. It is precisely a lieutenant's job to curtail such behavior from the ranks and to avoid bothering the Captain with it."
"I suppose the old days are over then." Four years at the Academy. Her, Paul, Jeremy (Lt. Brice now), Justin, and of course Julian, now Captain Laval, her ruthless C.O.
"I suppose they are."
"Who are you giving the mission to, sir?"
"No one."
"Sir?"
"I'm going myself. Tell the techs to have my new Marauder primed within the hour." 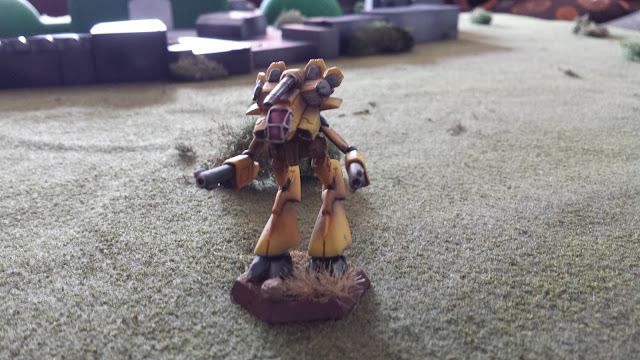