The last that anyone heard of Major Wilhelm Tritchel (Fritz) was an urgent call for reinforcements as he prepared to assault the Martian installation at Panther Burn.  Against his will, Colonel O'Malley, in charge of the northern section of the Mississippi Delta, obeyed orders from Divisional Command in Vicksburg and sent a battalion of strong armored forces south to support the young Major. 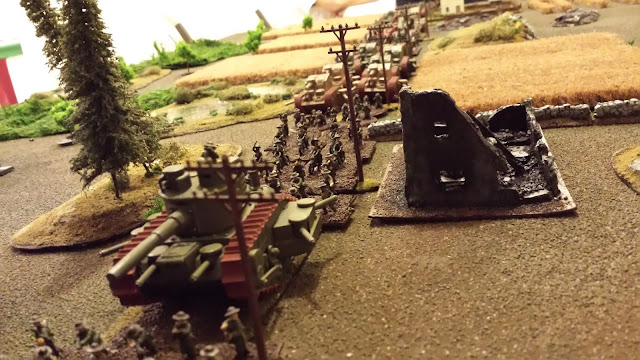 With the battalion streaming down the road, thinking that the ground ahead of them was held by friendly troops, they did not suspect that the Martians were waiting for them... 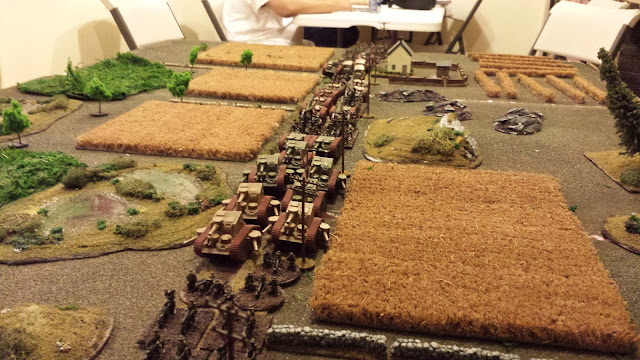 Rising out of swamps or dug-out hollows to either side of the road, the Martians stood up to full height.  The convoy stopped for a moment, the men frozen in fear for mere seconds before springing into action. 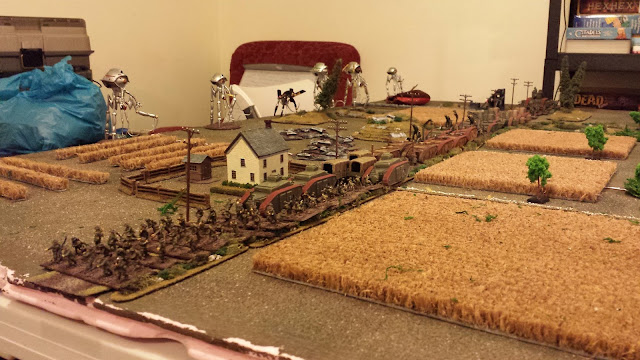 The commander ordered his men to press forward to break out of the ambush, rather than fall back. Whatever else happened here, Tritchel (he thought) was depending on him. 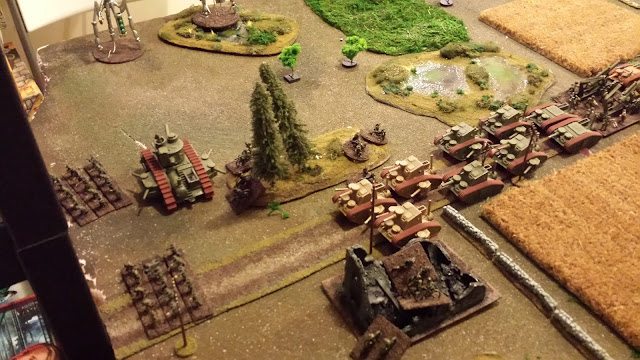 Meanwhile the tanks, transports and towed artillery found itself stuck in a dangerous traffic jam. 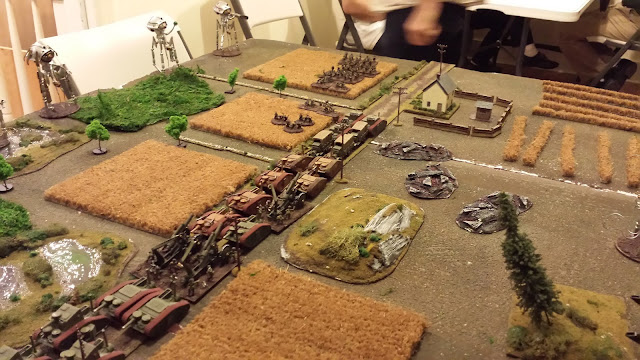 The infantry and mortar teams at the rear of the column moved at one to the left.  The commander hoped to concentrate his force in one direction, maybe taking a few Martians down as they fled the ambush. However bad the situation, the humans reacted quickly and with relatively cool heads (they won initiative the first round). 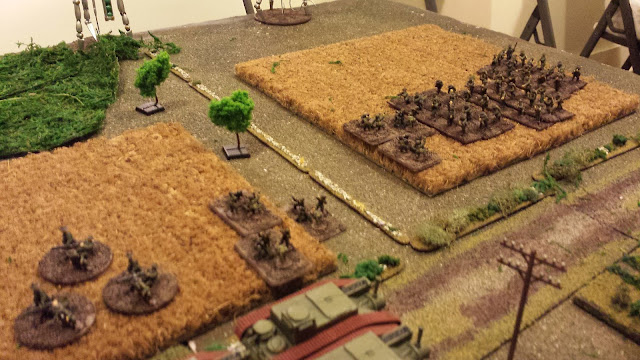 Tanks turned and fired, concentrating fire on a few tripods, hoping to think out the enemy ranks before they could move in for the kill. 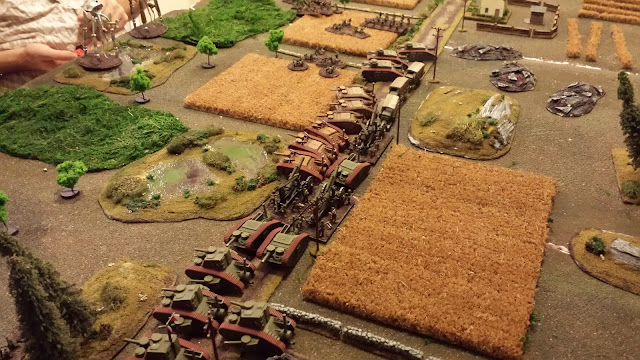 Choosing two tripods on the left near the front of the column, the tanks opened up. 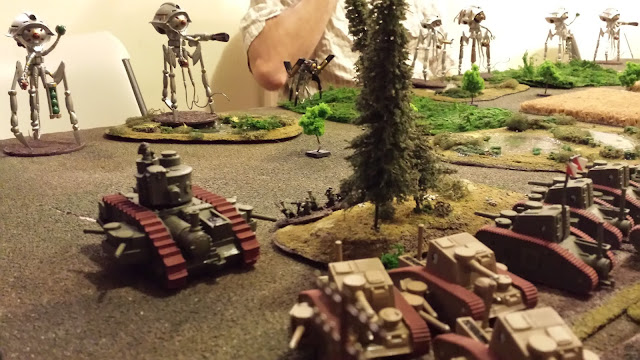 An assault tripod with black dust exploded among the incoming fire from the tanks, damaging the tripod next to it.  Aside from damage to its armor, its weapon systems were crippled. 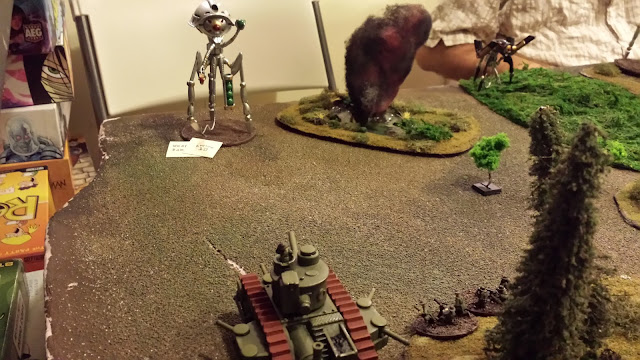 Further back on the line, tanks and machine gun fire destroy a more lightly armored Scout Tripod.  Reacting so quickly to the emerging threat and with such accurate fire, the American forces seemed poised to possible turn the situation around. 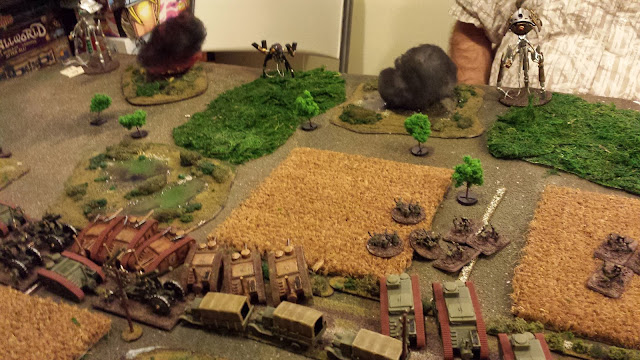 Ordering his men to push on rather than continuing to engage, the American commander ordered several American units in the front to withdraw from the fight after taking their parting shots. 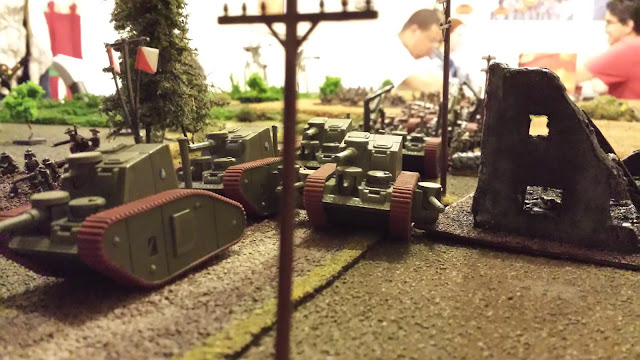 But at the center, the dangerous traffic jam continued to present a serious problem to a quick escape. 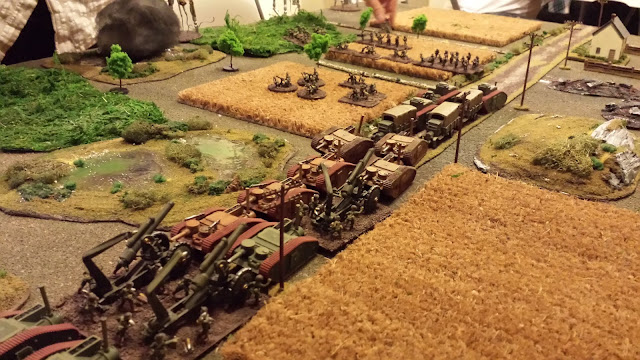 The Martians, having taken fire as they emerged from their hiding places, pushed quickly forward to catch the fleeing humans. 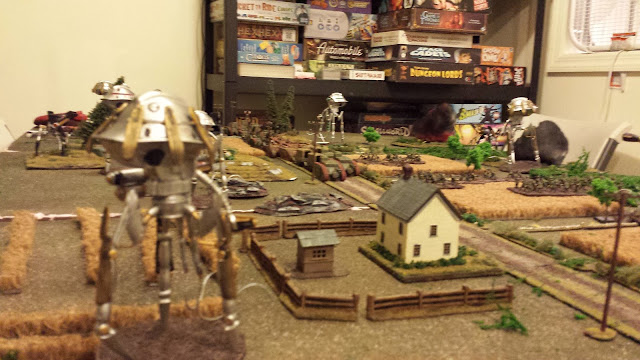 Dust and gas wielding Tripods quickly caught up with the infantry at the rear and began to lay horrific fire on them. 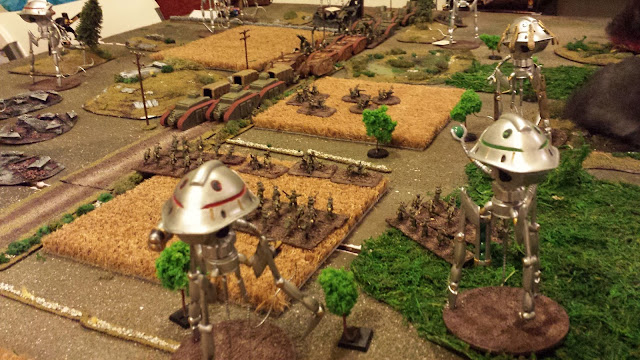 Meanwhile, sweeping shots from heat rays burned countless men alive at the center. So many tanks so close together presented a perfect shot for the massed invaders. 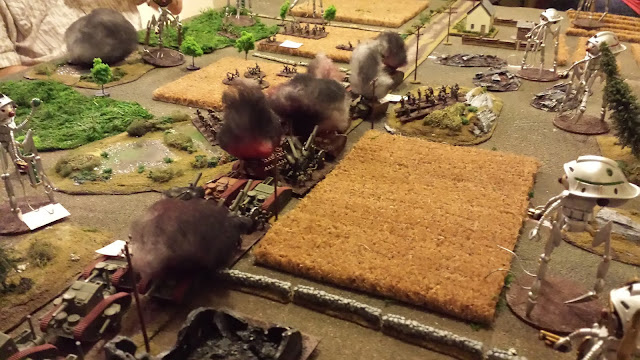 Infantry crawl out of the burning wrecks of transport trucks and take cover. 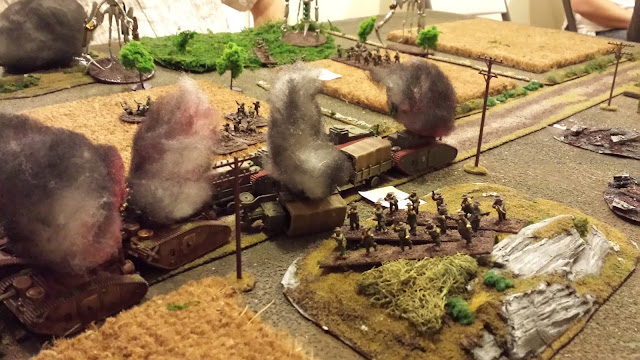 The sheer devastation wrought by the Martians in the first minute of their attack left the Americans reeling and unable to respond as their mighty tanks burned before their eyes. The Martians pressed into close contact before the human defenders could react. (Martians won initiative for round 2). 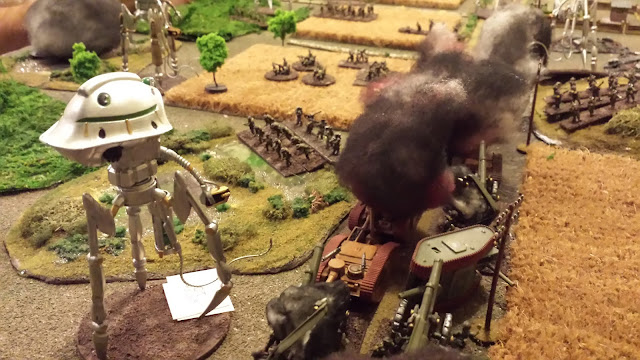 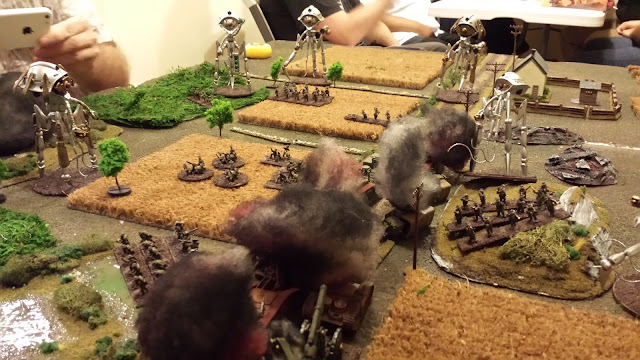 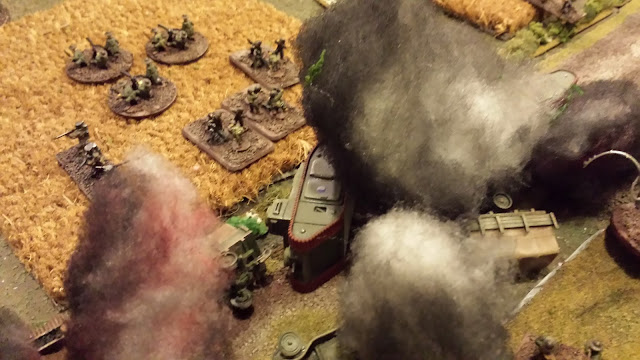 With Martian heat rays and artillery falling upon them nearly everywhere, individual units of American soldiers begin to panic and break, ignoring the officers trying to organize them.  The tentacles of the Martian war machines find them seconds later. 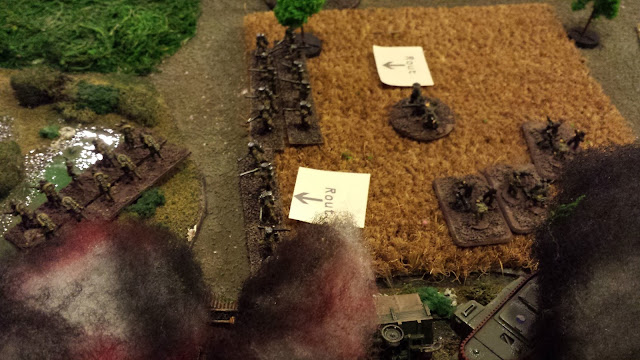 Meanwhile, three tripods block the end of the road to prevent any more humans from escaping. 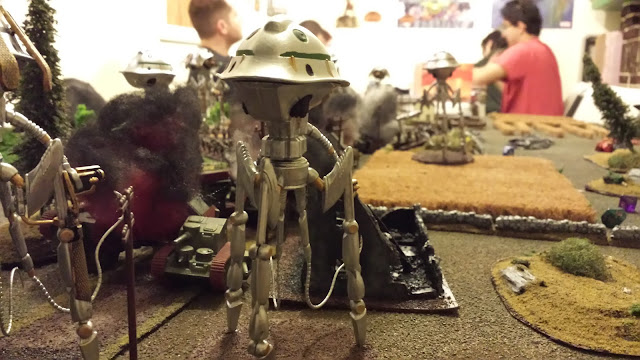 Mere minutes after the Martians emerge, all of the American vehicles burn together along the whole stretch of road. 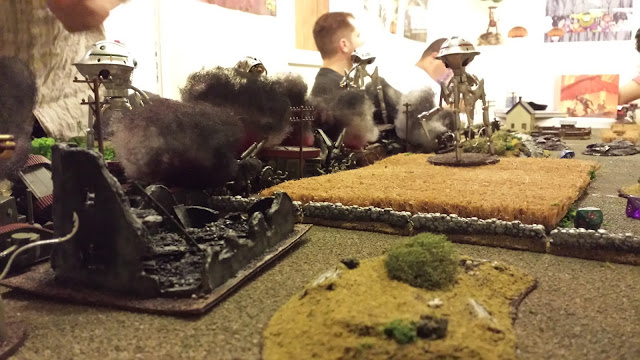 Only scattered doughboys remain, and the Martians hunt them through the swamps and fields like rodents. 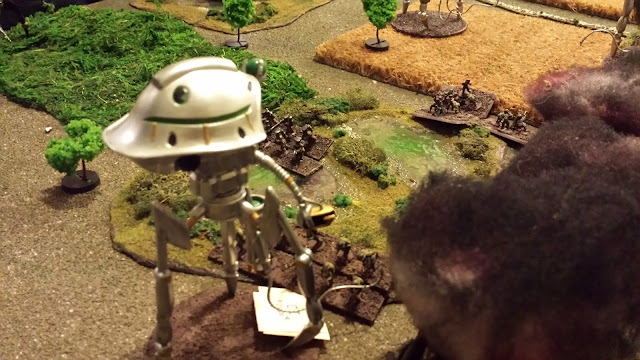 A few brave souls rally together and actually charge the towering tripods, throwing their grenades at close quarters. Surely the sheer pluck of these men has to be acknowledged, even in the face of the futility of the unsupported and scattered attacks. 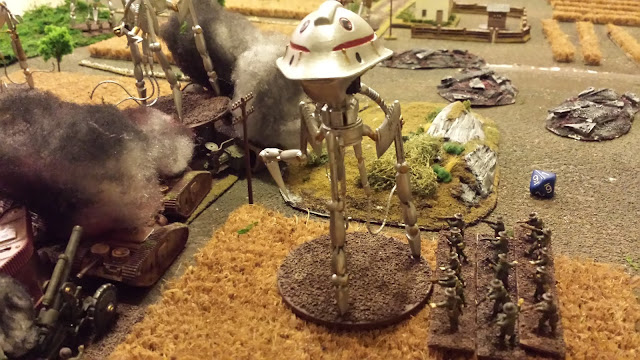 Two minutes after the first Martians were sighted, only a single squad of American doughboys remains of the once-mighty battalion. All fall together in that forgotten cornfield. 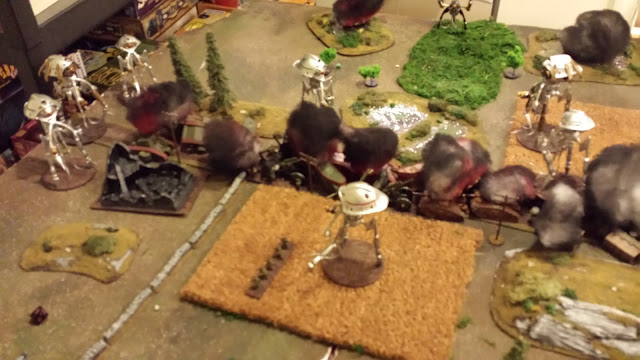 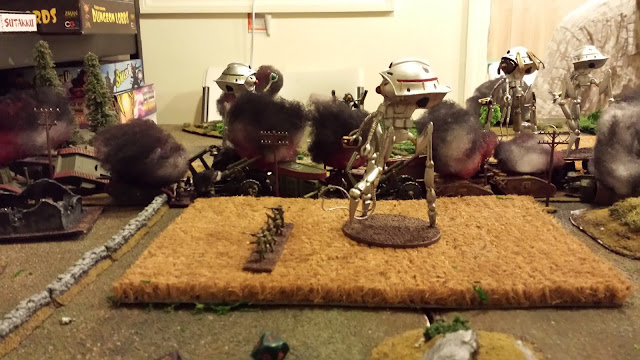 Yet another set-back for the 29th Division defending the Delta. With their reinforcements crushed, the defensive line on the Yazoo river stands alone.  Will they hold their ground, or will the Martians break them too, finally breaking the Memphis rail line and isolating Vicksburg itself?  Find out next time!


Sadly, despite winning the first initiative, the humans were pretty well trounced.