My new wargaming buddy Michael has been wanting to try Chain of Command for some time, and that time has now arrived. Break out the armies!  I wanted to keep things simple for this introductory game, so we're playing "the Patrol" scenario, rolling a mere 1 for support. Michael loves context for his games, so I sent him the following briefing: 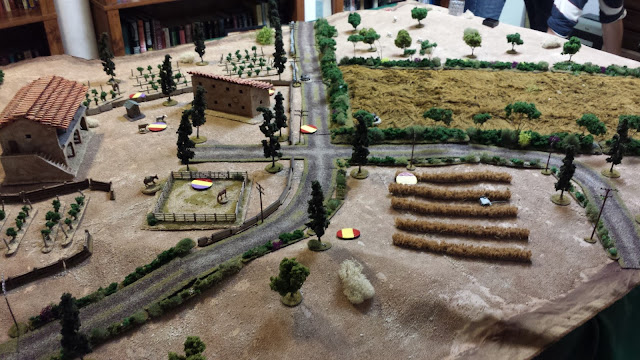 After the tumultuous events of the early days of the war, the Aragon front, stretching for over 200 miles of rural land, much of it sparsely populated, has been more or less static. The Republican positions had until recently been under the command of revolutionary militias such as the POUM and CNT which have recently been made illegal by the central government, and its columns finally subsumed into the regular army. An additional 40,000 men have been sent into the area, perhaps as much to hold the line as to keep an eye on the demoralized and bitter militias that still nominally hold the hills in the name of the Republic. While the region presents many tempting targets for the Republic, Zaragoza above all, the political divisions and the needs of other fronts keep things relatively quiet in Aragon.
For the Nationalists, manpower shortages have limited reinforcements to the Aragon front. Generalissimo Franco knows he can only concentrate his force effectively on one front at a time and has dedicated himself to destroying the Republican Northern Zone on the coast of the Bay of Biscay. Yet the city of Zaragoza, the capital of Aragon and one of the few industrial centers to support the Rebel Officers, remains an crucial location for the Nationalists, one which must not be lost. Therefore, the front is not completely neglected, being held by defensive formations. Like the men on the hills opposite them, these soldiers have little to call on in the way of support.
As it stands in the late summer of 1937 the Aragon front is quiet, the silence broken by occasional sniper fire from hill to hill, or on the foraging parties that snake their way through the dry and parched valleys in search of water and food.
You, as the commanding officer of your platoon, have sent a foraging party down into a valley that is known to have a well and an orchard. Unfortunately, there's been an encounter with their opposing number in "no man's land", in this case a farm between the lines. This encounter will be a brief flashpoint shattering the quiet of the Aragon front, drawing in men from both sides in an effort to bloody the other's nose and maybe grab some water for their canteens. 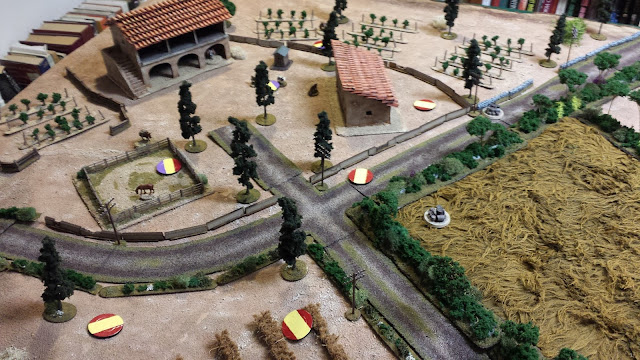 The Patrol Phase was pretty brutal in a way. You roll for the third of the long edge you will deploy from, I rolling for the center, and Michael taking the corner (upper left of the below photo). While he was able to lock my left marker down quickly, thereby securing the large stable and courtyard, I was able to lock him down in the vineyard on the left. The effect of this is that we ended up playing this game on perhaps 1/4 of the total table. It didn't leave Michael much room to maneuver - I offered to restart, but he refused.

We both rolled low for force morale, his Republicans starting as an 8 and my Nationalists as a 9. 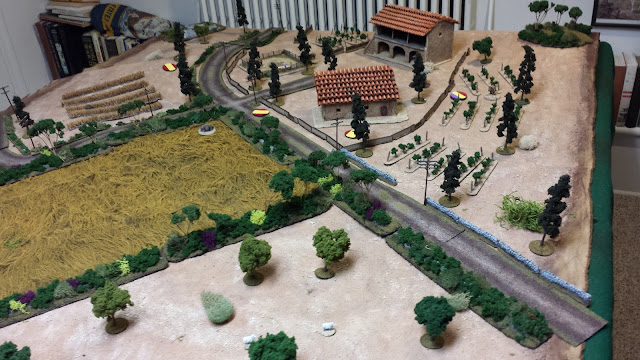 I didn't take as many images as normal as I was teaching the rules.  My first few moves however were very aggressive, as I had a run of 3 phases in a row before he even got to deploy anything at all. Deploying a section near the jump-off point on the road, I was able to get most of the section into the small house. Below, one straggler didn't quite make it inside. 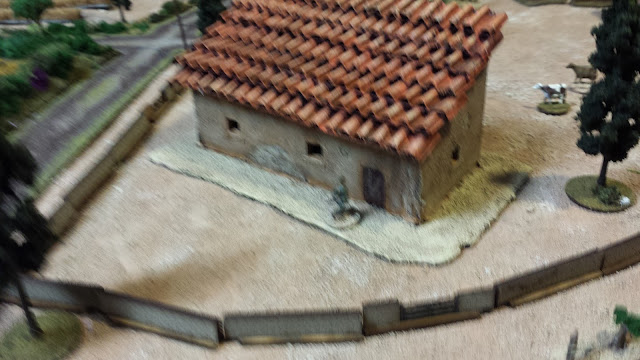 Finally getting to go, Michael deployed his section into the vineyard opposite the house, immediately jumping into a firefight. Deploying my second (and last) section on the same jump off point, I was able to catch some of his men in the open.  It was risky, as my two other jump off points were now unprotected, and Michael's two other sections were still unaccounted for. 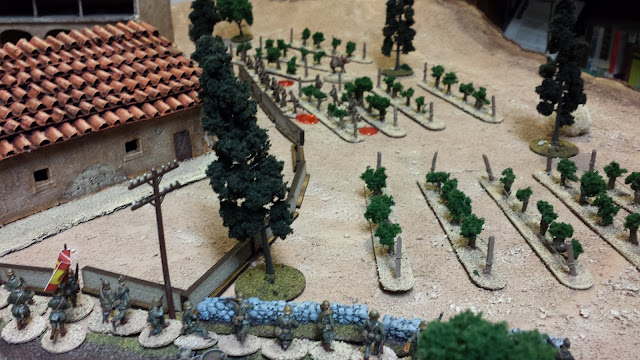 To cover the other jump off point, I put my LMG team on overwatch covering the courtyard, since I'd originally put them on the upper floor, making them useless in the current firefight, as there aren't any windows up there facing the vineyard. While one team on overwatch isn't that much of a real threat, it was enough of one psychologically. Michael hesitated on several occasions to put men out there, and that was enough for me. 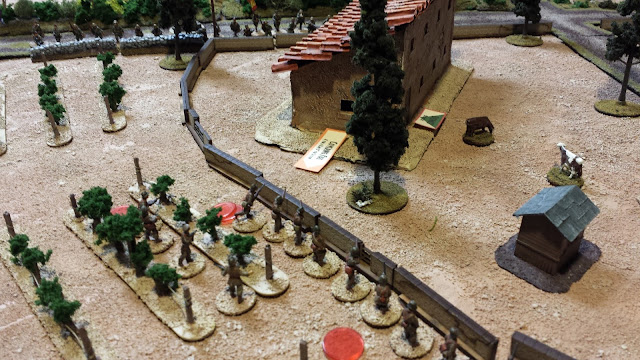 With the one window opening onto the vineyard, rifle fire was pretty ineffective, so I used covering fire (trying to show as many different options as possible) to suppress much of the front line, while the second section opened up en mass.  His poor Republicans were getting torn apart. His junior leader was quickly killed, forcing a morale reduction and making it impossible to deal with the shock. 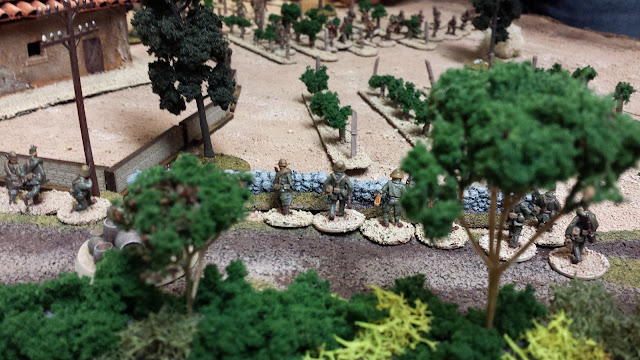 This close range combat was pretty one-sided, but with the other approach covered by the house, Michael decided to deploy another section into the vineyard, along with his senior leader to help with shock. Things didn't go well at first. 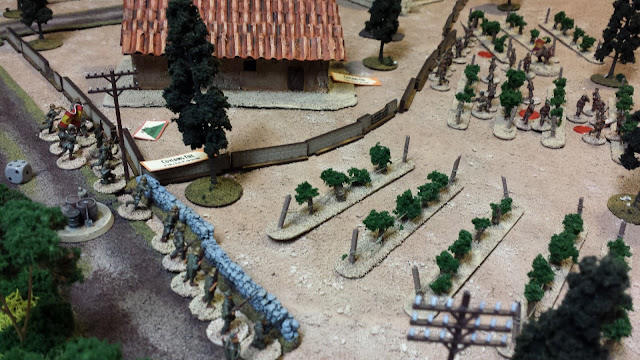 Finally, desperate to break out of the terrible position, the Republicans ordered their fresh section to charge the house. With the gradual accumulation of casualties from the firefight, and a rather poor roll on my part, they were able to clear the house. However, they took significant shock and casualties, and the senior leader was knocked unconscious! 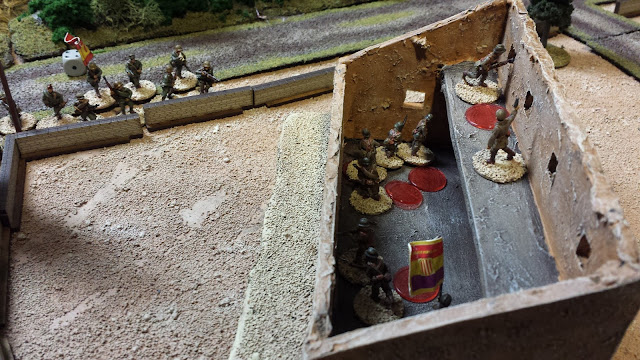 The previous inhabitants were forced back 18" and were pinned by the action, the junior leader killed in the melee. Yet none of the teams were broken or destroyed, keeping my morale at a 6 while Michael's dropped to a 5. 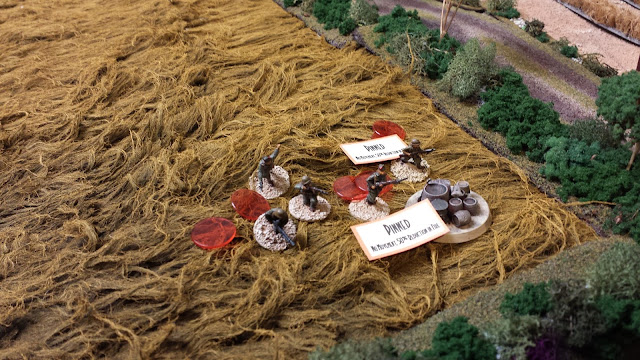 Returning the favor, my other section took advantage of the enemy's disorganization to try and retake the house. Having greater numbers, far less shock, and conscious leaders, the Nationalists were successful, completely wiping out the section inside. With three teams, a section, and a senior leader killed in the fight, there was no way to keep the Republican morale intact, and it dropped to zero, ending the game. 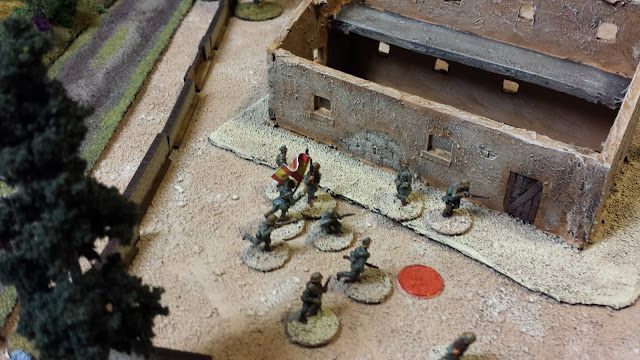 In all, by far the quickest game of CoC I've played to date, taking about 2 hours from patrol phase to finish. With so much concentration in such a small area, with all combat happening at close range, and with us throwing everything into two close assaults, it was also phenomenally bloody. I think I lost half my platoon for this "win."

We can only hope that the men find some seriously tasty water in those buildings.
Posted by Unknown at 11:15 AM