At the Edge of Town - Quinto Game 3 (Nationalists)

It's just before dawn on August 25th, the beginning of the second day of the battle of Quinto. The heroic requetes, the conservative Catholic volunteers which defend Quinto, have fallen back and taken up positions at the edge of town during the night. They are led by the man they call El Profesor, a former professor of theology turned platoon leader, though the men of the platoon are beginning to distrust the cerebral man who has allowed so many casualties while defending the main line outside the city.

The Lincoln Battalion has not been inactive - the Americans used the cover of darkness to flank the enemy which occupies the first houses of Quinto. Lt. Antov has a bold plan in mind - avoid the main (and presumably well-defended) approach into the town, and use the darkness to slip into the town from the south. 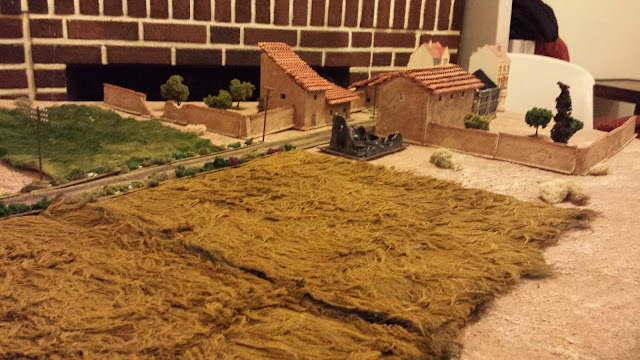 As the sky begins to lighten, the town seems almost abandoned... 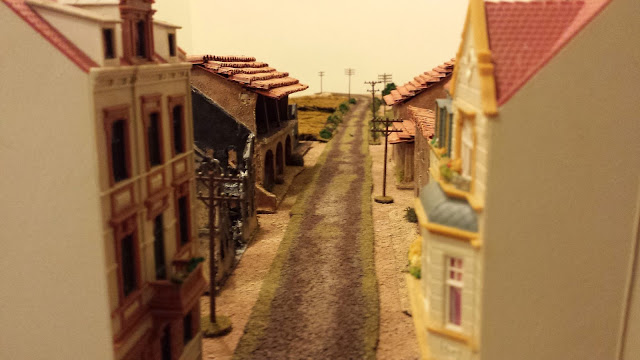 A very aggressive patrol phase sees Frtiz concentrate utterly on trying to get a JoP over the high walls at the edge of town.  He's unfortunately quite successful. 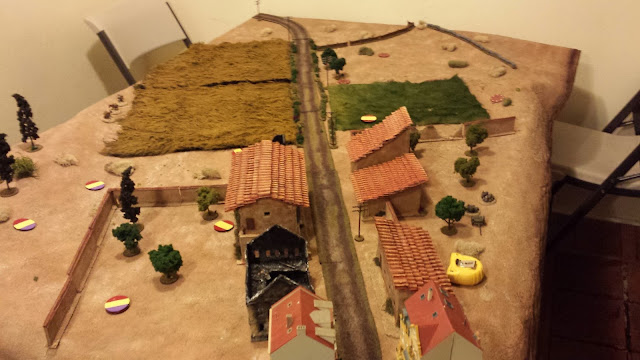 One is near the edge of the main approach to the town... 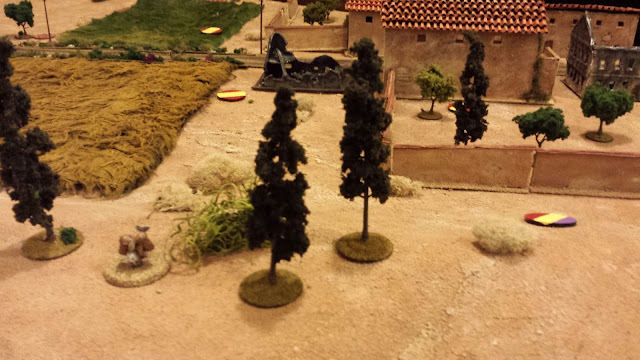 Another just across the wall. As it turns out, neither of us noticed at the time that this was actually illegal. The JoP should be further back and behind cover. Neither of noticed until I looked at the pictures afterwards. 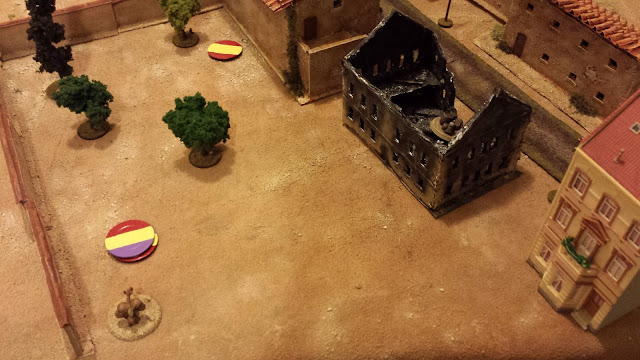 My JoPs could have been better, but it was a very odd patrol phase. One was quite advanced up the road, feeling very exposed. 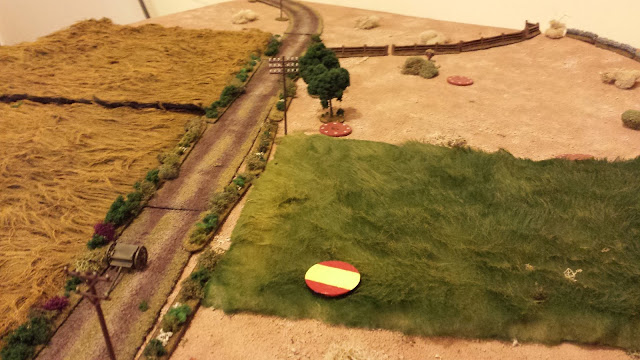 But only one of Fritz's were in the area.  My main worry was that he was going to force me to commit to guarding the main approach, and then use the JoP in the courtyard to catch me in the rear. 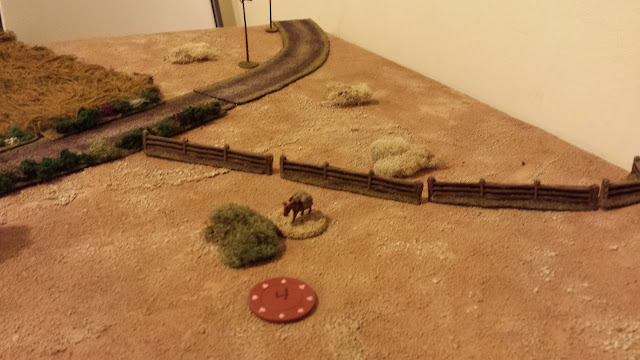 But that was not the Lincoln's plan. In the darkness before the dawn two tripod-mounted machine guns from the Tom Mooney Company set up in the courtyard, training their weapons on the buildings in front of them. (the two MMGs were the entirety of the Lincoln Support). 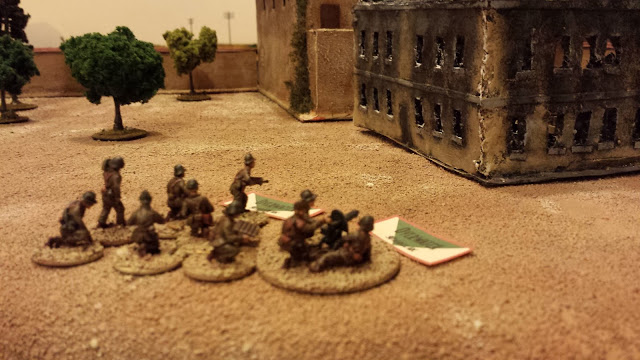 Shuffling to counter the threat, El Profesor sends his own medium machine gun to fire from a single window, down into the courtyard. A section of infantry (only 2/3 intact) adds their own fire, seeing one of the machine gun teams quickly pinned. 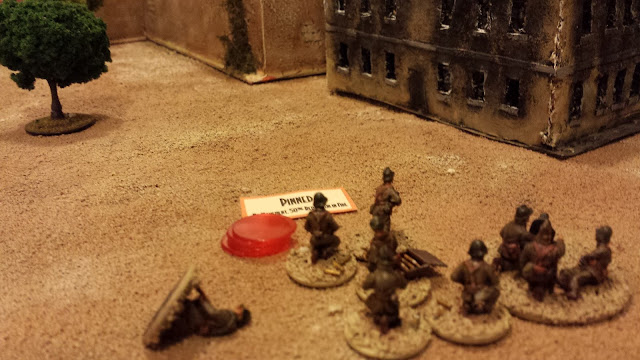 In the firefight that ensued, the second team was reduced to a single man, reducing its ability to fire back. 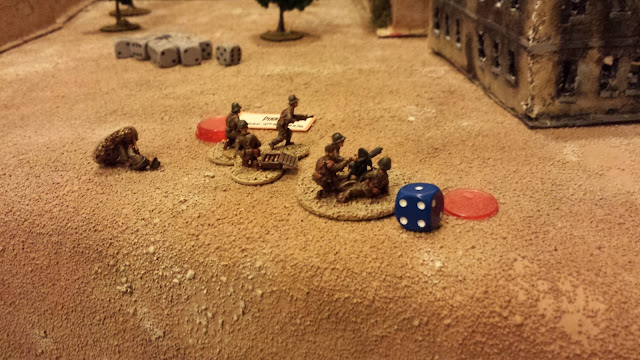 With junior leaders in those machine gun teams falling right and left, the Lincolns' morale began to quickly drop. 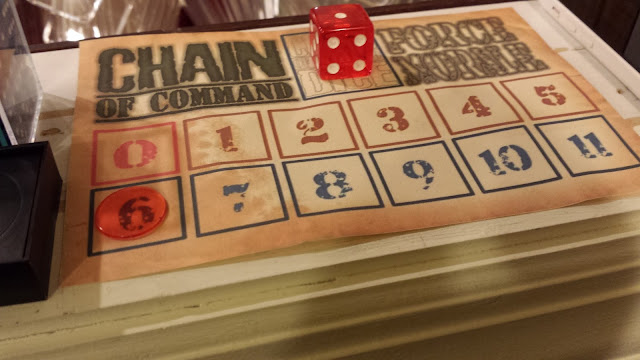 Doubling down, Lt. Antov, the Bulgarian-American commander of the Lincoln platoon, orders a full section to move through a crack in the wall, perhaps using the early morning light to their advantage. It's a bloody mess. The Lincolns are regulars, taking fire in the open, and shooting at green troops in hard cover. Both sides took losses, but the Lincolns were getting torn apart. 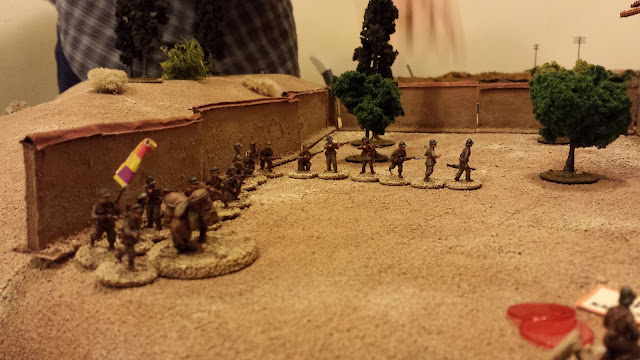 In the madness, the Requetes lost one of their Sargentos (junior leader), Dario Rodriguez, cut down by machine gun fire. A local tenant farmer, he'd been a constant positive influence on the platoon, never hopeless, always cheerful, and smilingly telling the men that he'd never eaten better than in the army. His loss was a real blow. 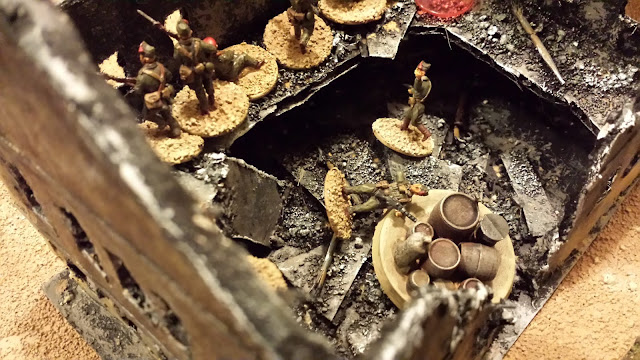 With his men screaming for help, Lt. Antov moves into the courtyard with the rest of the platoon. I likewise deploy my own final section into the other building overlooking the enemy (this section is also at 2/3 strength).

Everything is now on the board, and all of the action is within a single courtyard.  It is a place that these Lincolns will remember for the rest of their lives. 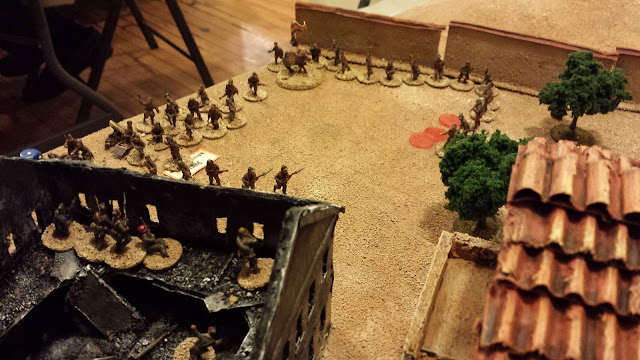 With one of the MMGs wiped out, Lincoln morale drops further, closing them a command die. Shock begins to accumulate... 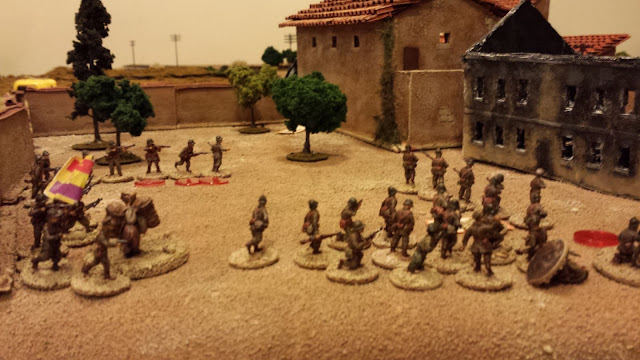 With the Lincolns in the open, the Requetes can choose their target. Concentrating on individual teams allows them to be weakened and pinned. 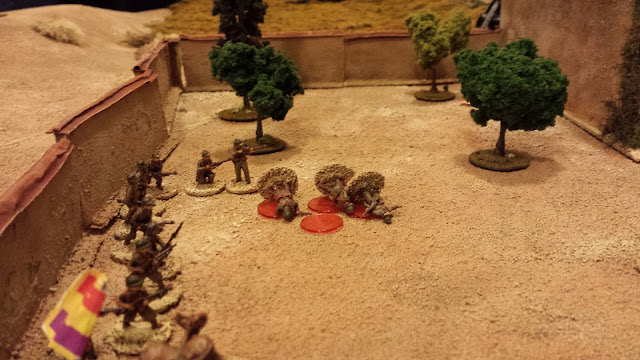 However, when Platoon Sergeant Guzman takes a non-fatal wound, morale also sinks for the Requetes. We started with a 7, as the men had begun to lose trust in El Profesor after the casualties of the two recent games.  Now we were down to 4. 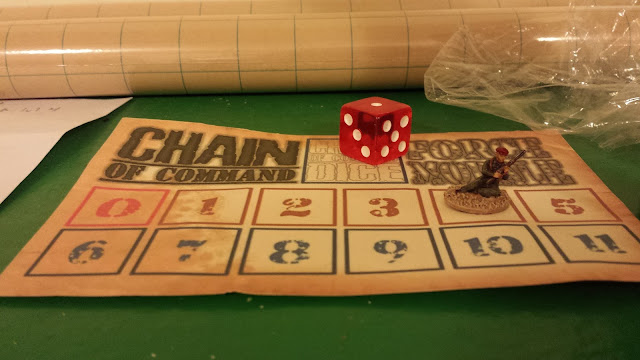 However the Lincolns too take a nasty hit to their own morale, as John Sarantoks, the Greek-American section leader and ardent communist, is shot down trying to rally his men. The attacker's morale also drops to 4. 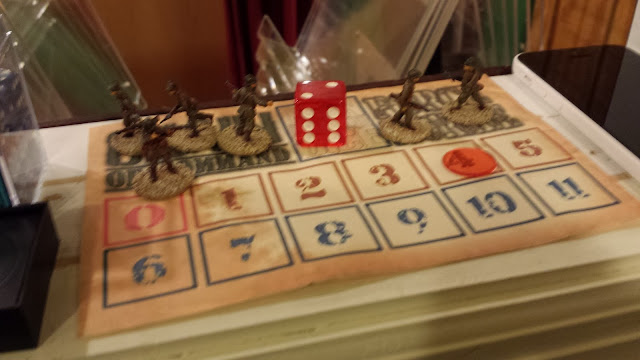 With riflemen laying down covering against the last machine gun, two LMGs and single MMG slaughter the Lincolns, causing many casualties and pinning two teams. 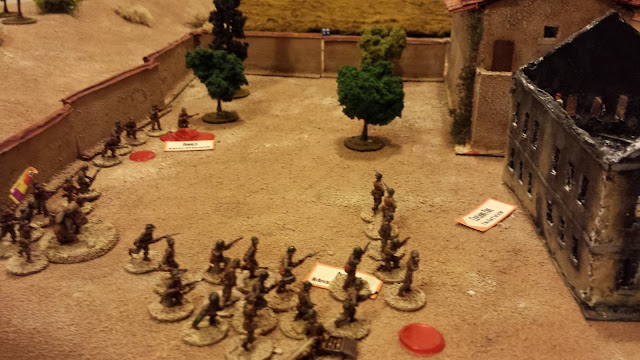 ...even as our own loses continue to accumulate. One section is down to two teams of two. 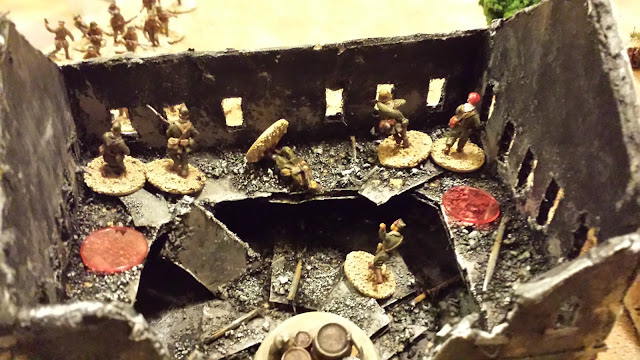 However, when another of the Lincoln's junior leaders is wounded, it drops their morale to a two, making the scenario unwinnable. 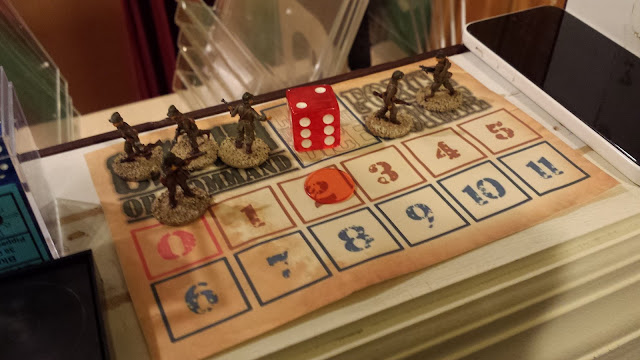 Lt. Antov gives the order to pull out... but the retreat is in such disorder that two teams are left behind.  One man plays dead, and is able to slip away to rejoin the platoon, but the rest are captured.

El Profesor, following orders from above, orders the foreigners up against the wall and shot. These are foreign invaders, and communists to boot, not Spanish soldiers misled by Communist lies. They are not to be treated as men. 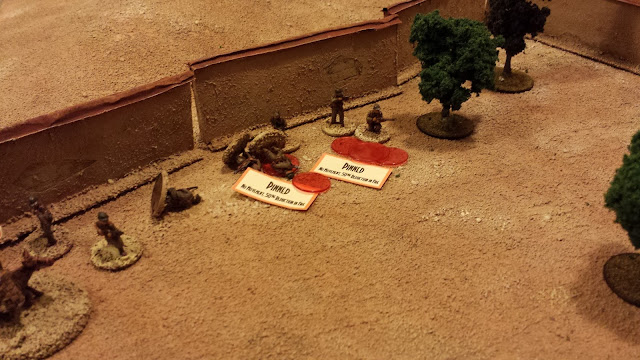 A rough game for the Lincoln Battalion. After playing cautious for two games and taking minimal casualties, they made an aggressive play and lost 12 men this game, most of whom will not return. The Nationalists only lost 6, so only 3 dead.  El Profesor goes from short tempered to enegetic, clearly happy with his victory, and the men are once again willing to place their trust in him.

With this result, both Fritz and I will be calling for replacements before we fight again on table 3. Given the excellent defensive terrain, I won't be counter-attacking. We'll use the time to work up some barbed wire...

Overall, I'm very, very happy with this victory, as it forces Fritz to burn his one chance at replacements on his first platoon, while still fighting my own first (and weaker) platoon. Sure, I'm burning mine as well, but if I really need it I can get another shot at replacements at the very end (albeit at the cost of reducing my 2nd platoon's quality to green).  If I can win again here, or if I cripple his platoon in the course of a close defeat, it will be very difficult for the Lincolns to take the church by the end of the third day. A Nationalist victory is still a possibility, but it will be hard to earn.
Posted by Unknown at 10:45 AM