Back to the 80s with some Cold War Commander. In the last game, the Soviets broke through at some cost, and now they are advancing up the main highway to Fulda. The highway runs through a narrow valley, and has two small towns strung along it. The Soviet objectives are to take the town and proceed to the far table edge.  A small US force is hidden in the area, force composition unknown. Onwards for the Motherland! 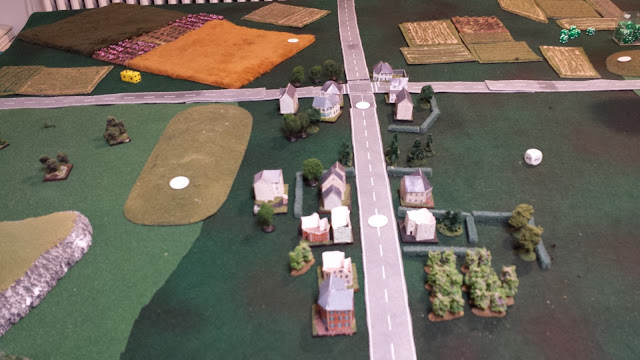 An infantry battalion in BMP carriers advances rapidly towards the first town while the two tank companies screen their right flank. Soviet artillery tries to shield their movements by covering the nearby hill with smoke. 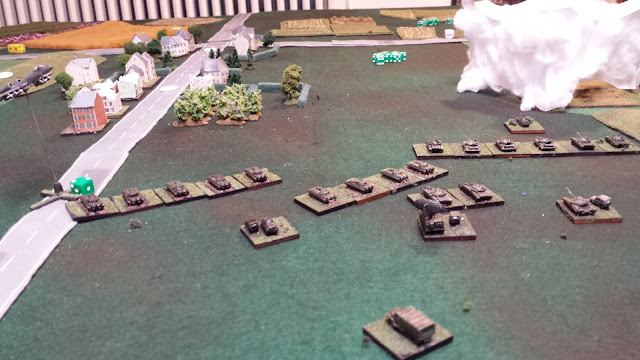 However, due to the incredibly annoying CWC activating rules, the BMPs pretty much ended up as sitting ducks for an impressive array of American artillery and air power. Unable to get my main anti-air assets out of their friggin' trucks, there was not much to do except sit back and watch most of my infantry burn alive in their transports. 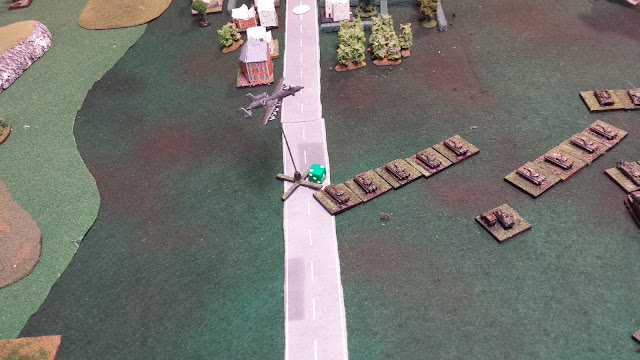 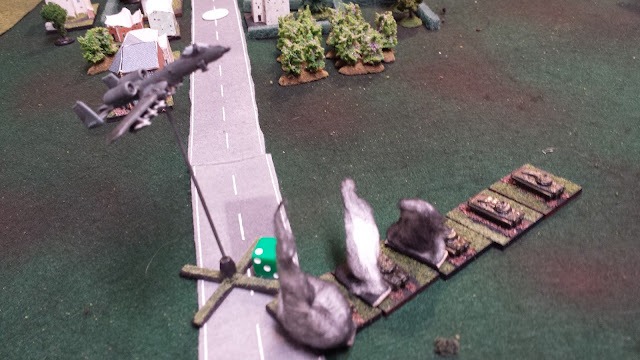 My opponent and host Michael had fewer points to build his force but chose them well, fielding a contingent of Abrams tanks as his main on-table force. In a risky move, he'd hidden them on the left (behind my smoke screen), and was able to activate them enough to get them around the smoke and onto another hill. He had a perfect shot of my tanks' side armor, but wasn't able to take the shot, due to those very annoying activation rules. 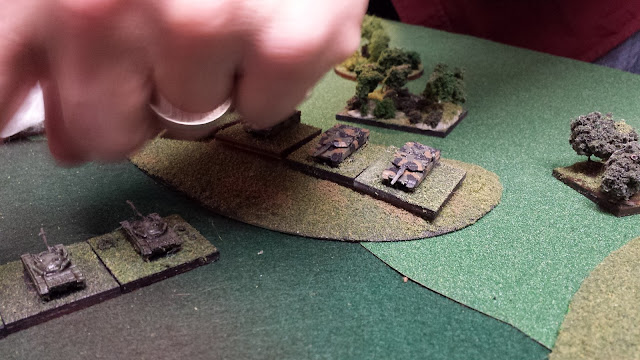 However, the way opportunity fire works in this game, the moment I try to turn my tanks to actually be able to shoot at the Abrams (Russian tanks have a more restricted avenue of fire - apparently all of their turrets are broken), Michael will be able to shoot his whole line, even though he wasn't able to on his turn.  I have three choices: shoot with maybe two tanks against one of his, try to wheel the line to face the Abrams, or try and push straight past them. All three options meant weathering a full round of fire. 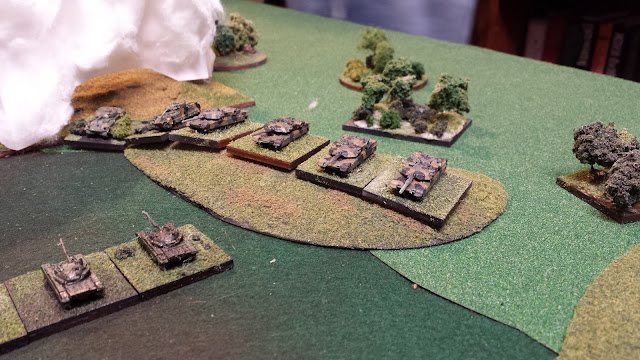 The enemy also dropped some smoke to limit return fire on the Abrams. 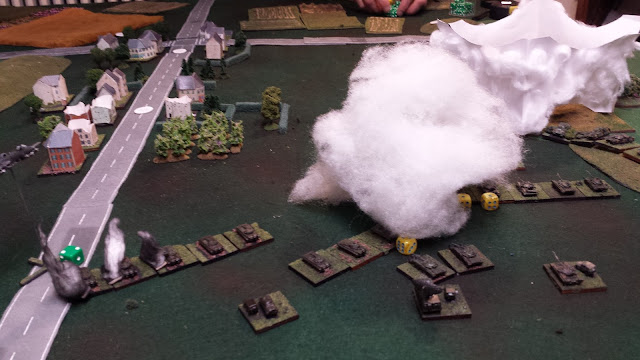 Michael had selected my force in advance, and had given me a sizable airborne contingent mounted in two helicopters. A questionable choice in the face of American air superiority. I decided to send them in to try and distract my opponent from the main event. 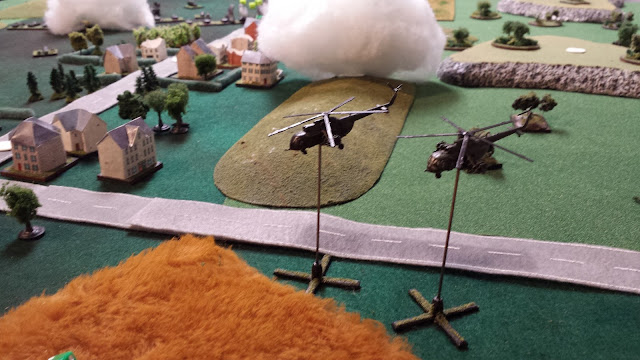 Predictably, one of the choppers is shot down, losing half of the airborne force in the crash. 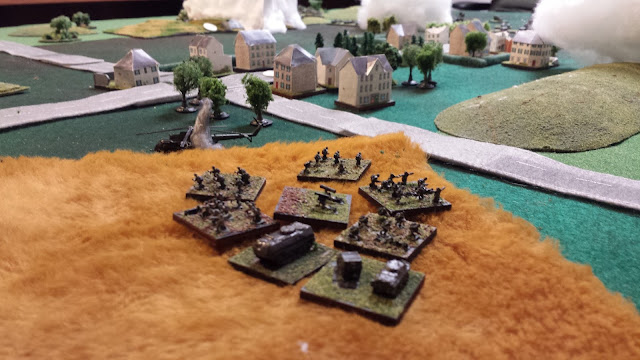 Meanwhile things on the right flank proceeded pretty much how I thought they would. Between artillery fire suppressing one of the two companies, and opportunity fire from the American tanks, I managed to get a single tank platoon clear of the trap, with one other platoon destroyed by fire and the other suppressed. 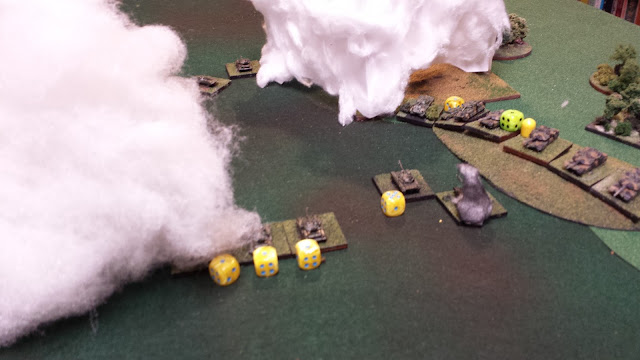 Knowing I needed some help, I had my HQ call in some air support. The chopper flew in to engage and, as seems to be de rigueur for me in CWC, it bombed my own tank platoon, destroying it. 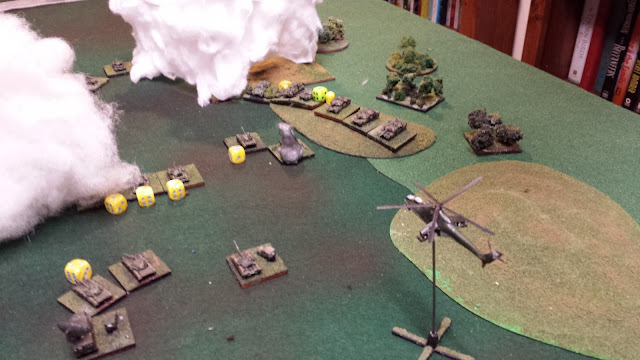 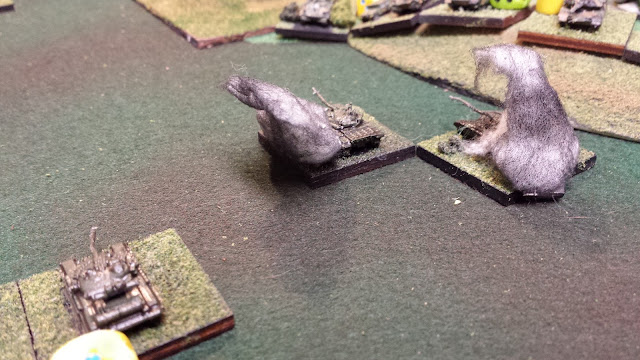 The Abrams tanks moved out to finish the job. 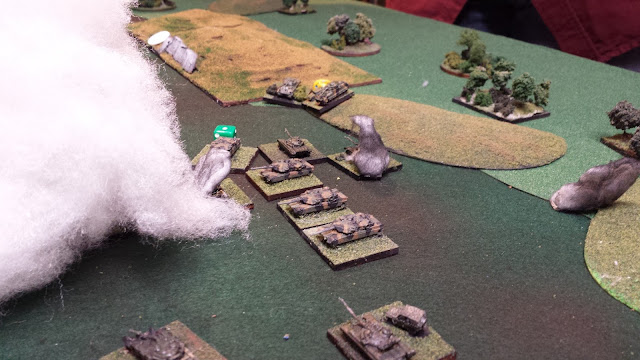 But honestly, the game was already over, thanks to absolutely punishing artillery fire which wiped out my entire infantry battalion before they could manage to activate and dismount. 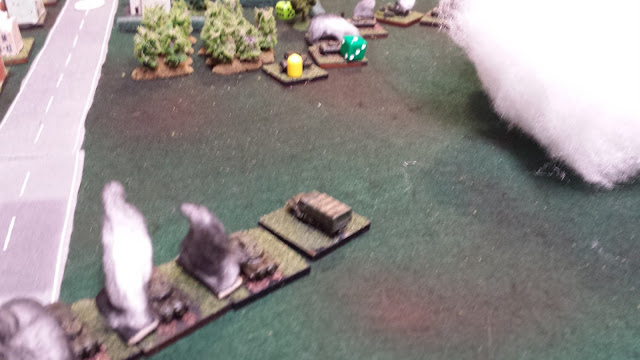 Calling it a night after a very short game, Michael revealed his devious strategy. Putting nearly everything into tanks, the only thing occupying the villages was a single HQ unit.  A very risky strategy, but it worked out in this case. 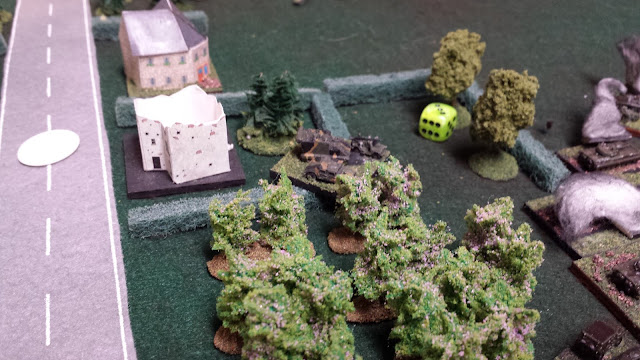 The only other unit he took was an infantry company poised behind the hill on the left to react to my moves.  It was a very savvy and admirable strategy, but as much as I admire it, I felt positively hamstrung by a combination of the uneven knowledge available to both of us, and the rules themselves. 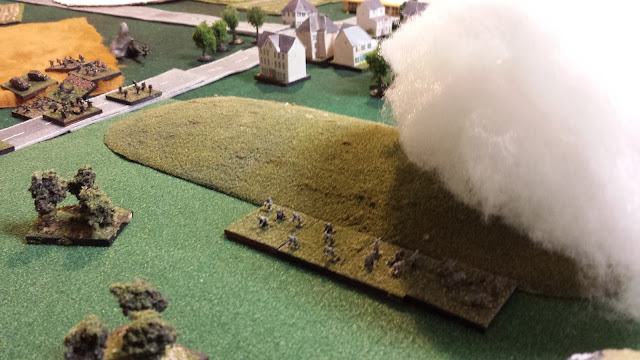 Losing a game can be a very fun experience. I've played epic games that resulted in total defeat, had desperate last stands against overwhelming odds, and led massive offensives that were blunted and taken apart by a wily opponent. But this game felt very different. Part of it was, I think, the rules of CWC itself, which I think are overall rather bland and lacking.  Part of it, sadly, was the way this scenario was developed by my buddy Michael, although I don't want to blame him much for my experience or undercut the wonderful work he did to bring the scenario to life.

Essentially, thanks to him being an enthusiastic host and preparing everything in advance, he had unintentionally given himself an unbeatable edge. He knew his force (which was deployed hidden), my force (which, to save time, he selected), and created the scenario and table with several weeks to go over it in his head.  I knew only my force, which I didn't even choose, and nothing else. I was doomed before we started.  In future, if someone picks my force, I'll insist on having the same info on their force, just so things are more or less even.

Something we should all keep in mind as we prepare games for our friends I guess.

I'm not one to rage-quit a game, and I played it out to the bitter end (although from the 2nd turn it was clear there was little point in doing so), but this was probably the most frustrating single session of wargaming I've ever had. After four or five games of Cold War Commander, I'm realizing that, scenario aside, I find the game mechanics frustrating, win, lose, or draw. I've given it a solid shot, but I don't think I'll be returning to this rule set anytime soon. It's largely personal preference I imagine, but it is what it is.  I'm learning what I like in a rule set, and just as important, what I don't like. In my next post, I'll post my thoughts about CWC rules, and make some observations about how other rule sets handle the same issues differently.