Fritz has been busy.  He's got a new lance concept he wants to try, and before this game I knew nothing about it. I refrained from watching his excellent Battletech vlogs, but couldn't help thinking about our last few games.  I took a guess that he was building a force specializing in short range weapons, perhaps with some fast hovercraft as a flanker.

Building a lance to cover this force, I thought about experimenting with the rules on indirect fire of long range missiles. I took an LRM carrier, a Stalker, a Catapult and as my spotting force a Karnov Transport VTOL and three platoons of infantry.

Turns out I was wrong about Fritz's plan. The flankers were Locust mechs and the force was a long range missile carrier, an archer full of LRMs, and for close combat, a Charger.  It was likely to be interesting.

The 1st Argyle Rangers, loyal to House Davion, march straight into the town and take cover behind the buildings. The VTOL drops off the infantry on the top of the tall buildings at the center of town. 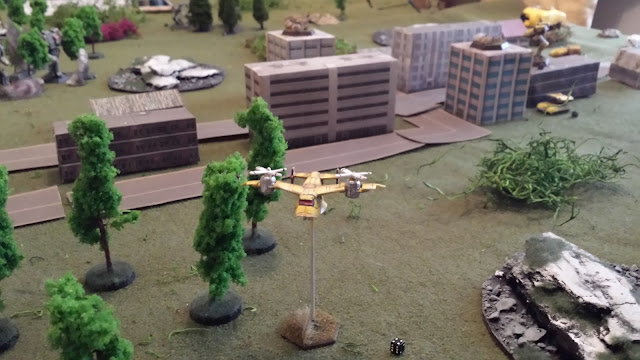 The mechs line up under cover and start firing into the woods at the approaching enemy mercenaries. 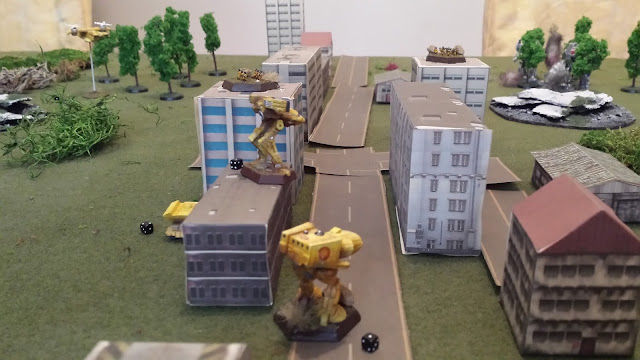 The infantry spotter zeros in on the LRM carrier. Taking about 60 LRMs worth of damage, it explodes without even so much as seeing the enemy. 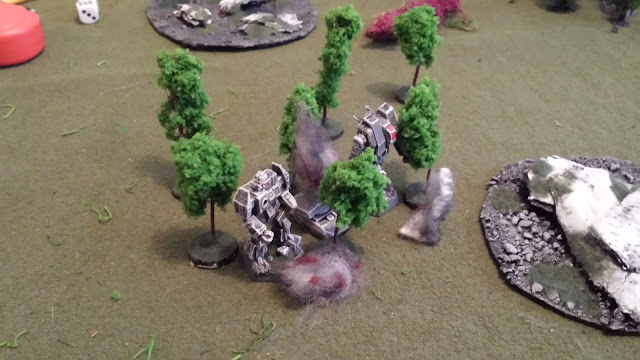 A squadron of four Locusts move incredibly fast through the forest, positioning themselves behind the Davion force. 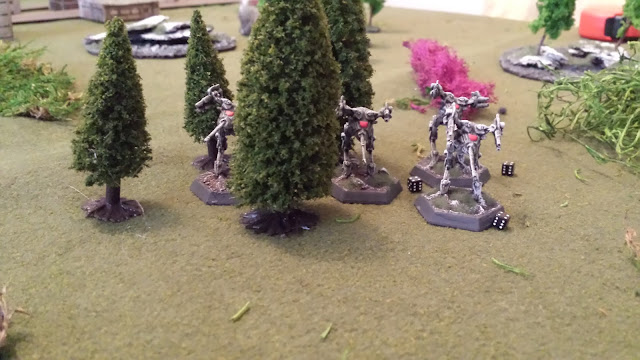 The enemy mechs move into the town, taking fire all the way. Finally, an incredibly lucky shot sees an LRM 15 pack take off the head of the approaching Archer, killing the pilot instantly. 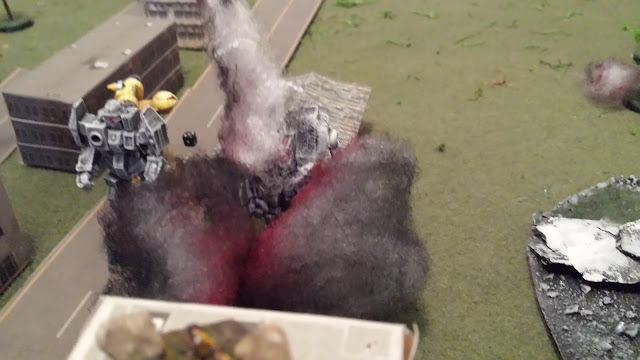 Left alone, the Charger did what it does best, it charged. Running towards the Davion Stalker down the town's main road, where all of the assembled infantry opened fire on it from the windows of buildings. 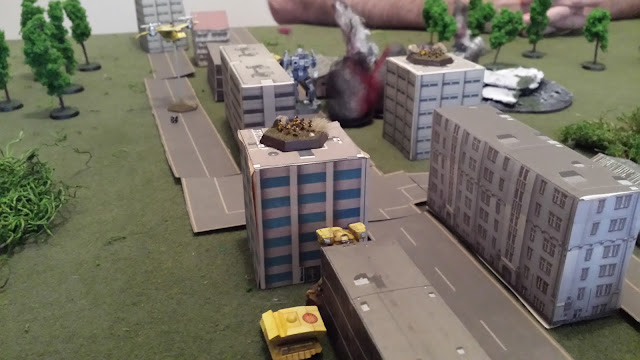 As the Charger ran the gauntlet towards her, the Stalker's pilot, Marissa Howard-Davion, was forced to turn to face the four Locusts poised to pounce at her back. 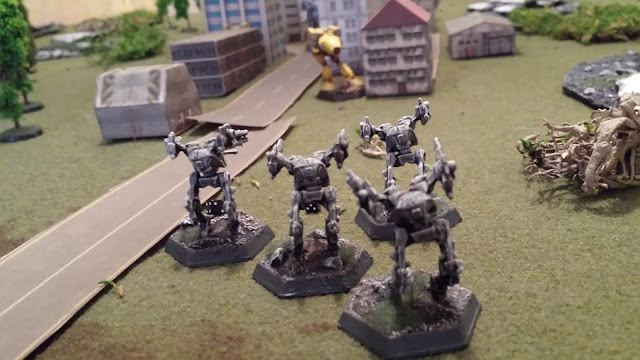 For a moment, she lost sight of her allies, and suddenly felt very alone. Charger rushing her back, Locusts swarming at her front, the Stalker went for the weaker prey, killing one of the locusts with a barrage of missiles. 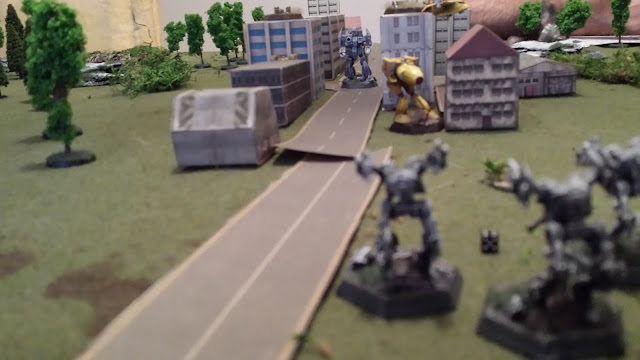 Meanwhile the fast and deadly Jenner mech ran straight at the Charger's rear and unleashed everything it had. Pieces of the charger's armor flew everywhere as the laser rifles of three infantry platoons, the medium lasers and short range missiles of the Jenner, and indirect fire from the hidden Catapult concentrated fire on the mech from all directions. 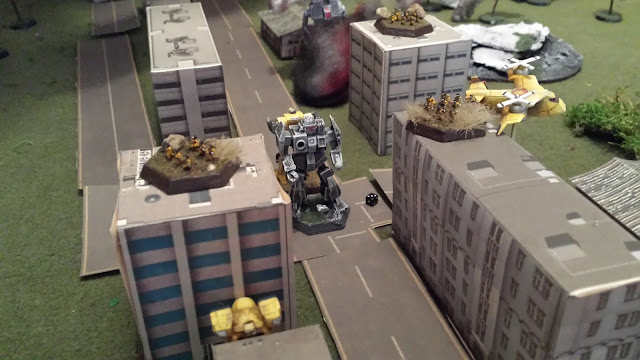 Nearly reaching melee range with the Marissa's Stalker, the assault proved too much, allowing Marissa to finish the mercenary off with perhaps unnecessary enthusiasm. 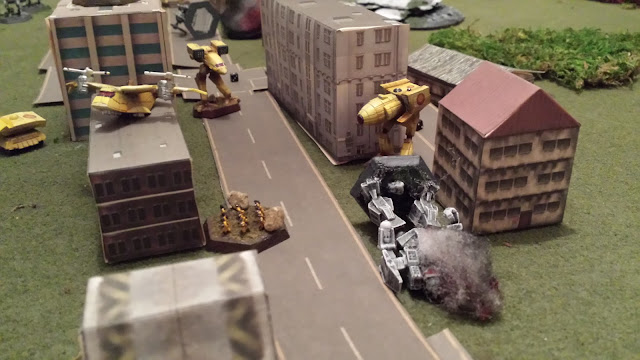 The mercenary force was defeated, with the three remaining Locusts fleeing back the way they came, with a Jenner hot on their heels. 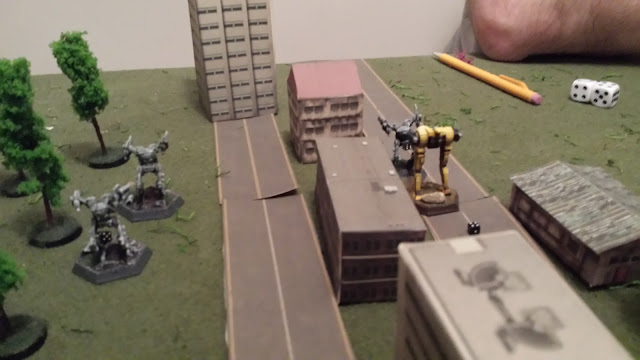 So yeah, indirect fire. It works, especially when you use Infantry and fast moving carriers, like a VTOL. They're cheap and they can allow you several turns of uncontested fire if you have the right cover and range. I was worried about fighting LRM to LRM, but deploying into the city allowed me the right cover to drop round after round of long range missiles onto the enemy.

All of this Battletech is giving me ideas of my own for some new lances.

You know, I told myself that I had enough Battletech minis.  Why do I lie to myself like that?  Why?

More Battletech to come.
Posted by Unknown at 12:16 PM