The opening battle of the Vicksburg Campaign!  Rules and additional background here.

The 29th Division, the "Blue and Grey", was ordered to hold the Mississippi Delta region, a stretch of 200 miles of low-lying riverland and humid bayou. The American Division was split into two Brigades, the Blues (NJ National Guard), which would guard the force's logistics in Vicksburg and along the Yazoo River, the last line of defense before the vital Jackson-Memphis railroad.  The "Grey" brigade (VA, MD), would form a mobile defense of the Mississippi River fortifications and the rich, but now largely empty, farmlands of the Delta. 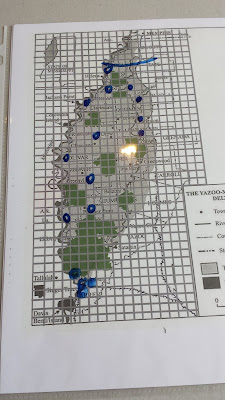 On March 4th, 1914, two Martian formations were seen wading the river. One force waded towards a lightly patrolled section in the north, and would be able to make landfall with little trouble from the Americans. A southern force which was heading straight for an artillery battery in Issaquena County, a fortified section of river guarding the only corridor through the bayou, a battery desperately lacked manpower. The Naval Riverboats were able to use the new British radios to warn Vicksburg.  HQ deployed Captain William Tritchel with the 119th Armored Battalion to reinforce the artillery battery and attempt to hold the Martians at the river. The General reasoned that the trenchworks in that area were clearly more favorable a battle than the farmland behind them. As the formation of tanks arrived, they received word that two other Maritian forces had taken their flanks. 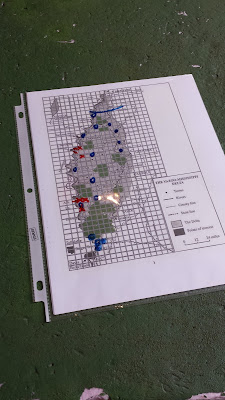 (Each circle represents roughly an American battalion, and the red x's are the Martian equivalent) 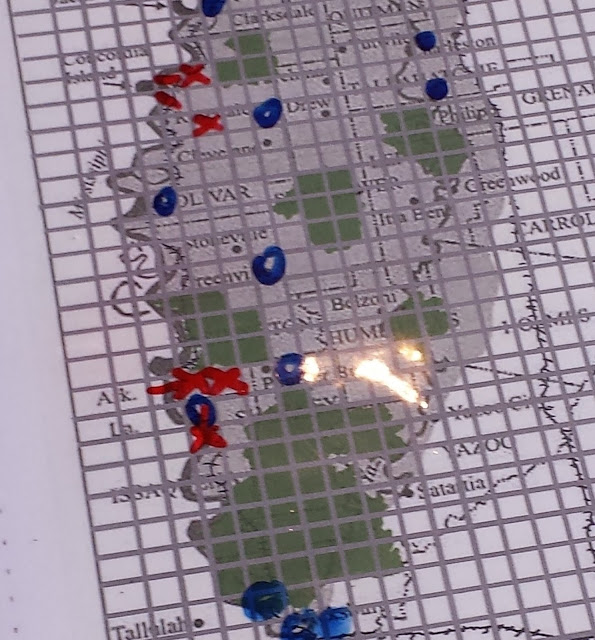 The 119th Armored battalion, along with elements of the 58th Artillery Brigade, deployed into the trenches.  Captain Tritchel positioned himself in an ammo dump between the trench lines. 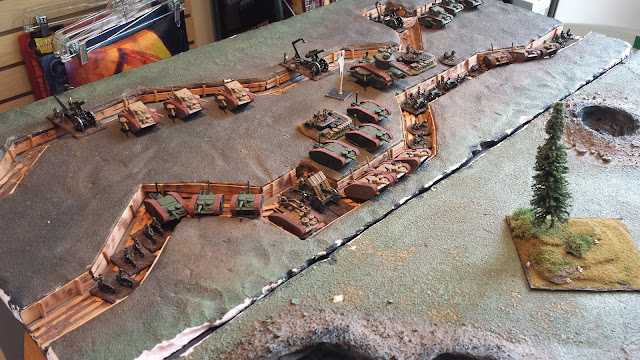 The Martians cross the river, sighting their weapons on the American battalion. 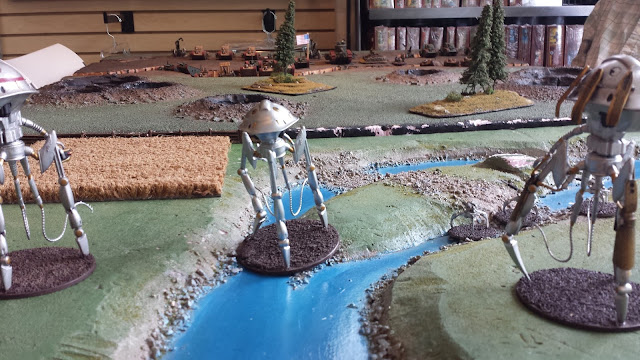 Captain Tritchel ordered his forces to hold their ground and wait for the Martians to get closer.  All but the Heavy Howizers, which blasted away the moment they received map coordinates from the river boats. They struck the Armored Veteran Tripod dead on, but it did little more than crack the armor. 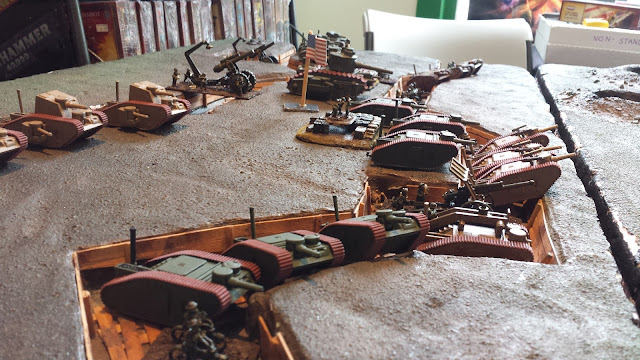 "Christ those things move quick!" Captain Tritchel said as the tripods raced the tributaries and streams which fed into the mighty Mississippi. 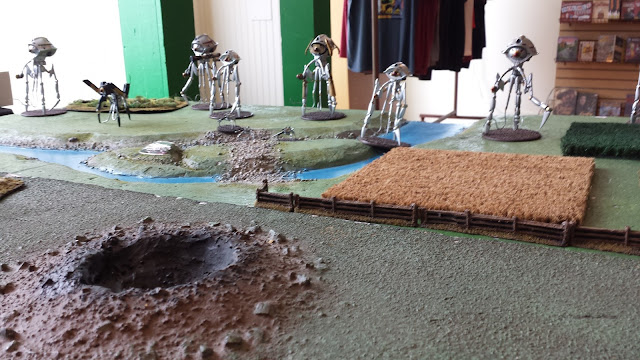 The grenadiers take up positions on opposite sides of the line, and finding cover, begin dropping death on the American trenches. 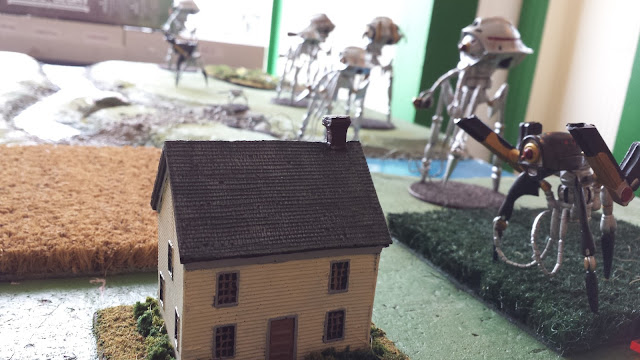 The MKIV is destroyed, a demoralizing blow. 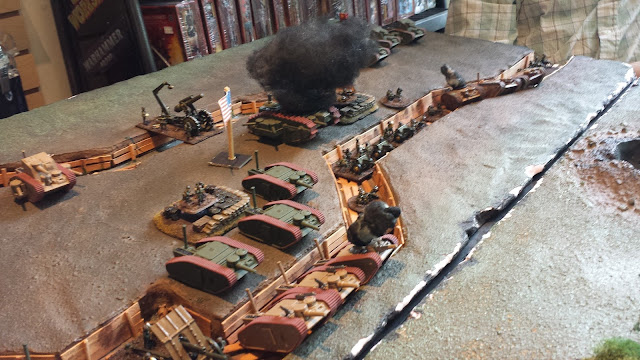 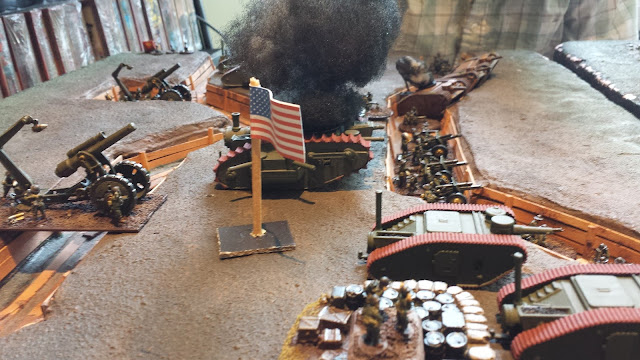 The Martians, even at long range prove deadly.  However, once in range they slow, forcing the American commander to make a hard choice. Does he stay and wait for the Martians to come to him and endure continued long range fire, or does he order his men to leave the safety of the trenches? Captain Tritchel, standing meters from the burning MKIV tank, orders his rough riders forward. The Martians are too far to assault this round, but perhaps next...

They move forward into some of the shell holes. 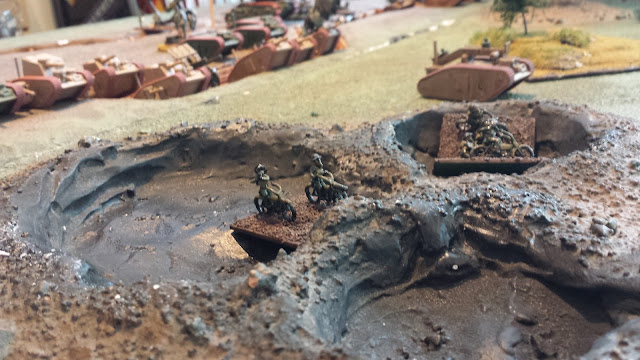 The minelayer also advanced, but was immediately destroyed, just after laying a single mine.  Then, from the north came another group of Tripods, wading down the shore. They rushed at the rough riders, and penned them in, inside the hole. A scout targeter lit up the bikes for the grenadier. The brave rough riders died a black dusty death. 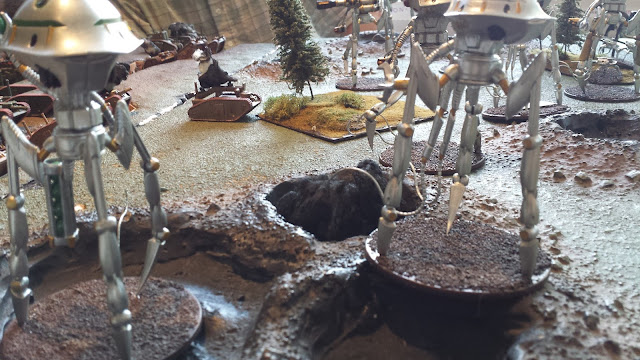 Heat rays tore through American tanks, and some of the tank drivers panicked, making for the rear. 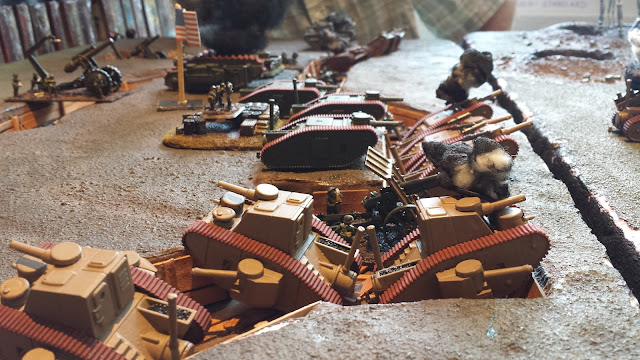 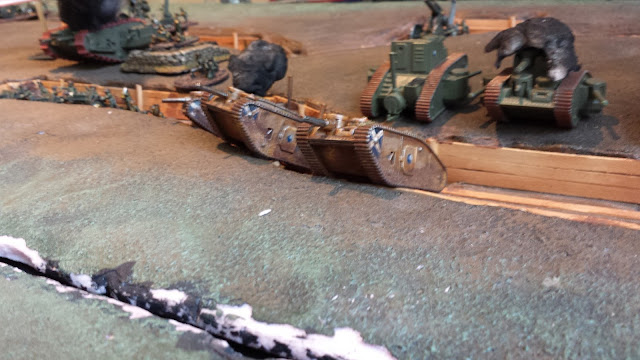 Captain Tritchel ordered his men to concentrate on the smaller scout tripods, hoping to blind the grenadiers and to whittle down his foes. Shots from tanks and artillery tore into them, but still came. 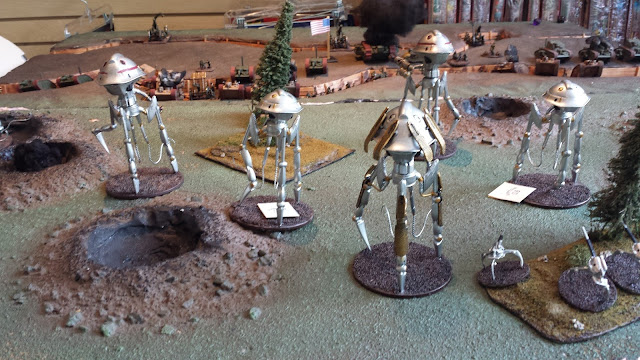 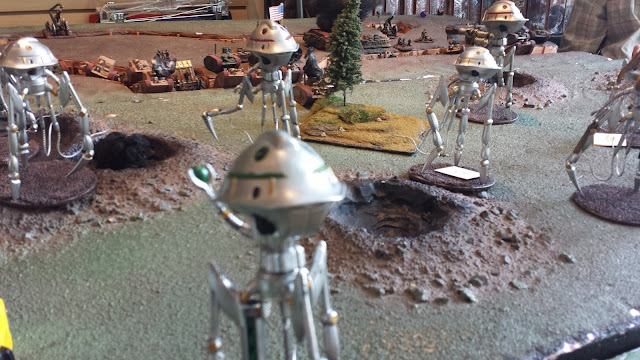 And then, fire from a half-strength group of MKIIs got a lucky shot and one of the scouts exploded. The blast caught an assault tripod which crashed to the earth before exploding as well. 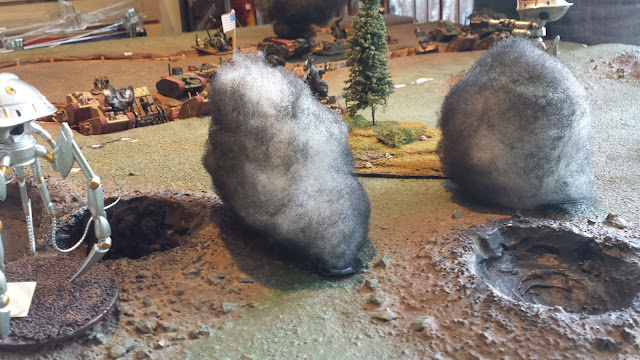 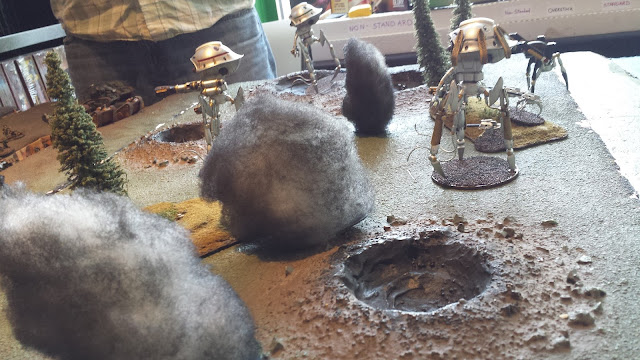 But the Martians were not so much as slowed by the fall of their kin. There was no emotion, no human hesitation in their movements.  They advanced upon the men, and for most, their cheers died seconds before they did. 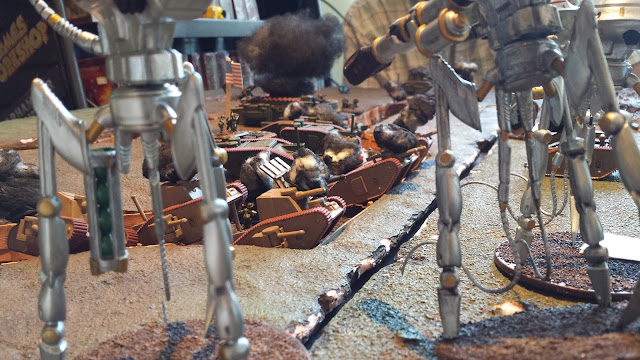 The assault destroyed nearly all of the American armor. Those few tanks that survived, attempted to flee. They too were mercilessly cut down. 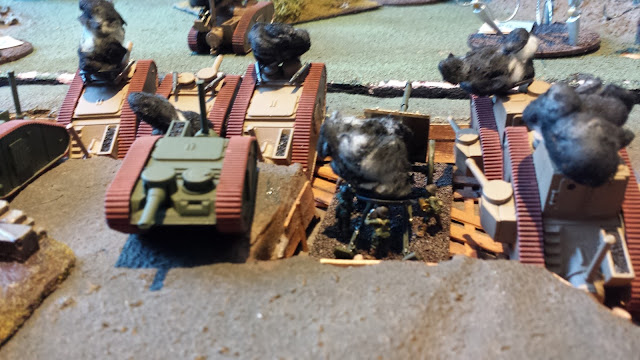 Captain Tritchel, next to the smoking ruin of his MKIV, gave the order to the Artillery - "Fire one last round into the bastards, point blank, and then fall back. We're getting the hell out of there." 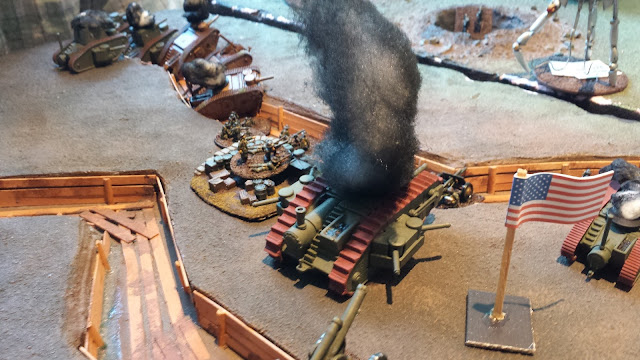 Some followed the order, while others broke and ran. More damage was done to the Martians, but it was not enough. Plenty of Martians continued their inexorable advance into the Delta, and the artillerymen, abandoning their guns, were cut down in droves. A few of them escaped, along with the traumatized Captain Tritchel, made it safely back to the American lines, but the 119th Armored Battalion was no more. 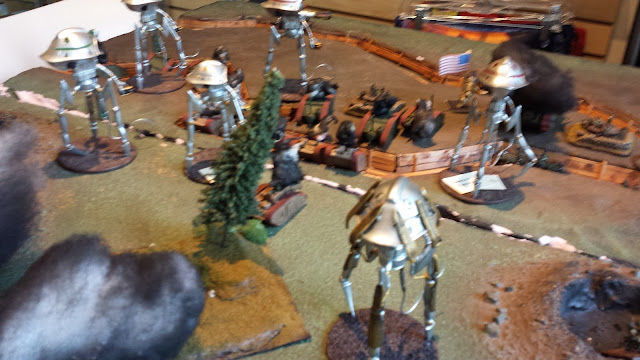 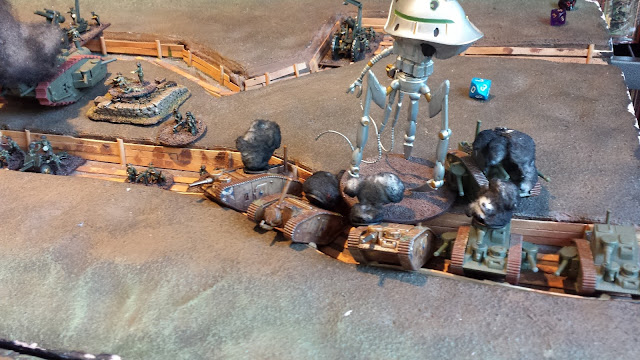 After the Martian victory at the Battle of Issaquena, the invaders advance deeper into the Delta. Another group of Martian reinforcements cross the river to exploit the opening provided by their victory. Meanwhile, two American battalions are rushing to the aid of the survivors of the 119th Armored, taking up positions in the small township of Panther Burn.  Little more than the collection of a few buildings surrounded by farms, Panther Burn guards the only firm, dry approach to the inner Delta in the southern part of the region. If the humans can stop the Martians here, it will force them into the swamps if they hope to get past the defenders. On the other hand, another defeat here would mean a disaster, as beyond the two battalions deployed here, there is little between Panther Burn and the Yazoo river. It will be a crucial battle, one way or another. Will the good cover inside the town be enough to overcome the strong Martian Forces?

Meanwhile, in the northern Delta, American forces gather to contain the major incursion into Bolivar county. A battle between what appears to be evenly matched forces will soon ensue among the farms there.  The advancing Americans will be assaulting the Martians on three sides, but the open country favors the invaders. Back in Washington, DC, the President and his cabinet anxiously await news of these battles... 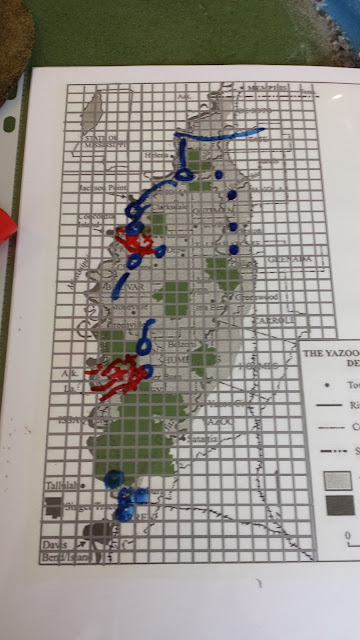 Battle of Issaquena OOB:
Note: Martians have 500 more points to reflect support from other units on the campaign map. I expected the trenches to make things a more even fight.