Somewhere on the Periphery... 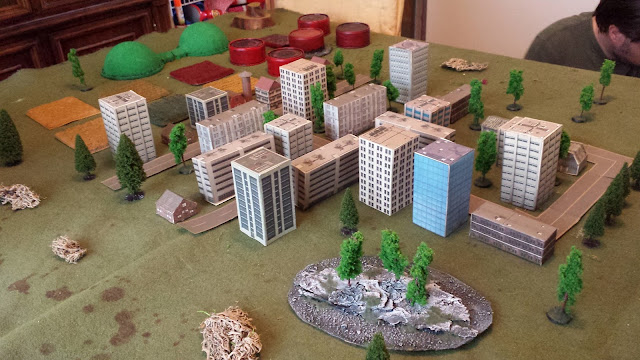 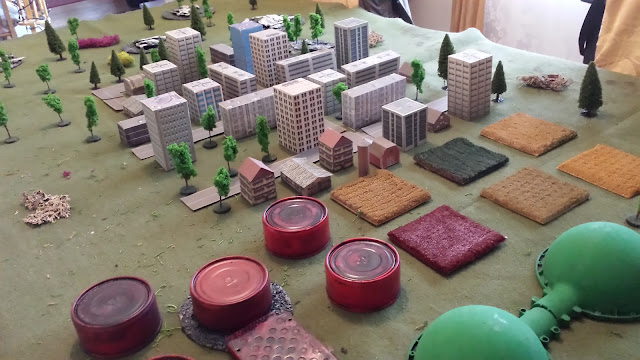 Four House Davion mechs march to secure a small city from the mercenaries of the Grey Death Legion.

Davion forces are supported by two platoons of infantry with missile launchers, deployed in a Karnov transport VTOL.  These rush forward, deploying infantry onto rooftops to spot for LRMs in the mechs. 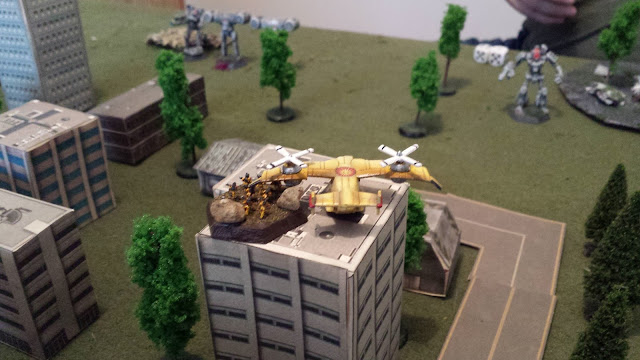 The enemy Battlemaster takes some shots at the transport, but misses. 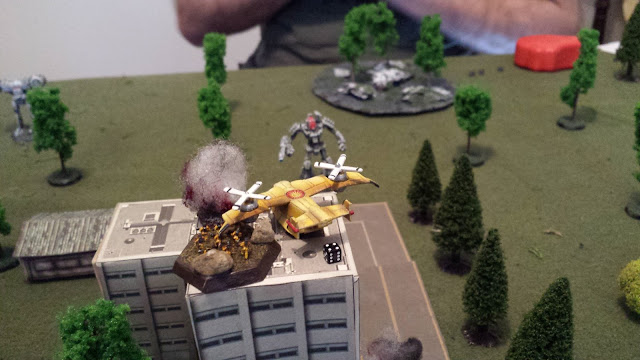 The Karnov quickly deploys to the other side of the city, dropping its infantry near the approaching enemy. 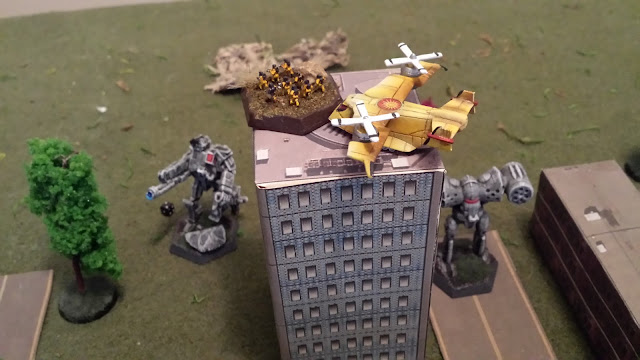 Meanwhile the Davion mechs stay in close formation as they move into the city. 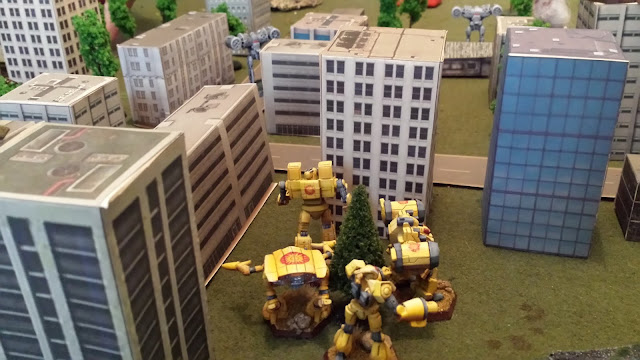 As the now empty Karnov retreats, the infantry on the rooftop fire their missiles into the Longbow's back.  My opponent did not fear the infantry, as they do little damage.  This, as is happened, was unwise. 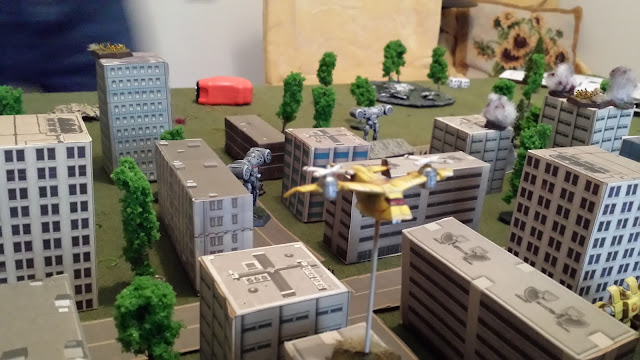 The missiles tore through the weak rear armor and connected with the Longbow's ammunition stores, turning the mech into a fireball of exploding metal.

As a rules note, we were using simplified rules, allowing infantry to deliver their damage to a single spot as opposed to splitting it into 2pt damage groupings. After this infantry "1-shotting" the Longbow, we'll be biting the bullet and using the damage grouping rules for next time. 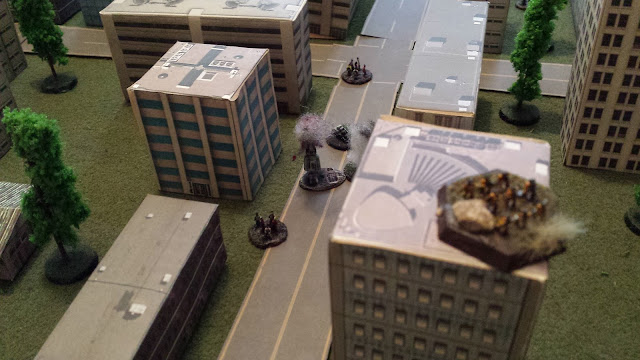 With one longbow down, the Davion force concentrated its fire on the surviving missile boat. LRMs came down like sheets of rain, but most missed their target. Several connected, shredding the mech's armor. Return fire was minimal. 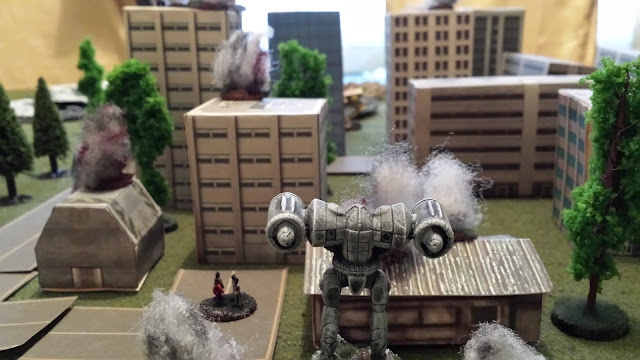 The enemy Battlemaster moved into flanking position, hoping to break up the very effective indirect fire from the Davion force. 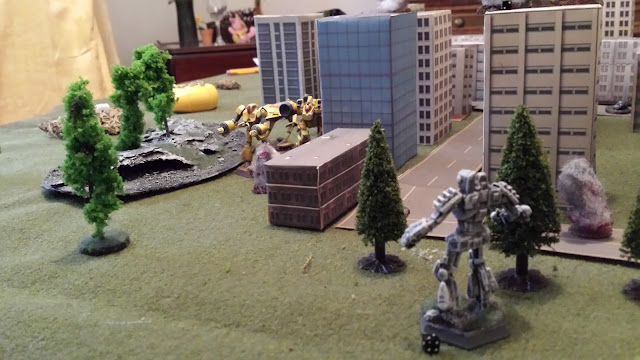 But with one Longbow down and the other backing off, the Davion force was able to turn nearly all of its firepower on the flanking Battlemaster. 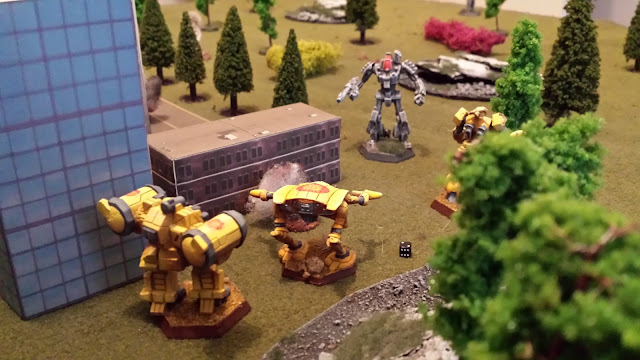 Oh, and the Grey Death Legion also had a single ineffective Locust mech.  Intended as a spotter, it took too long to get into position (moving around the whole city to avoid shots), and ended up only lightly harassing me force. 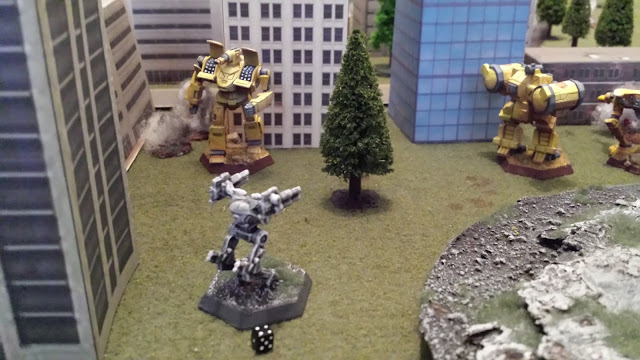 Moving into close range, the King Crab opened up with its dual AC-20s, knocking pieces off the Battlemaster. Concentrating the return fire on the Crab did little beyond scratch the paint of the massive assault mech. 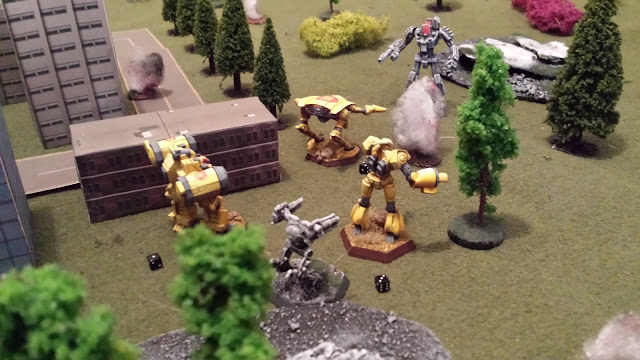 After ages of plodding through the city, the Warhammer finally found the battle. 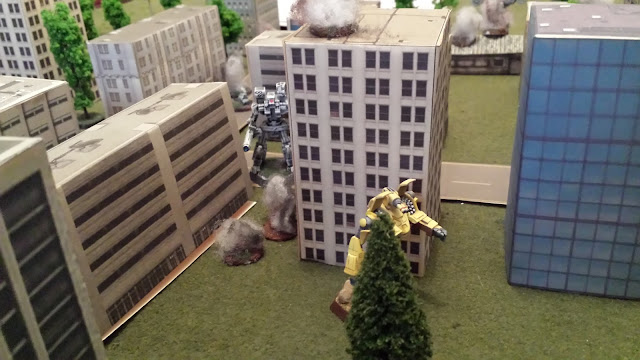 Ignoring the slow warhammer, the Davion force now completely focused on the Battlemaster. 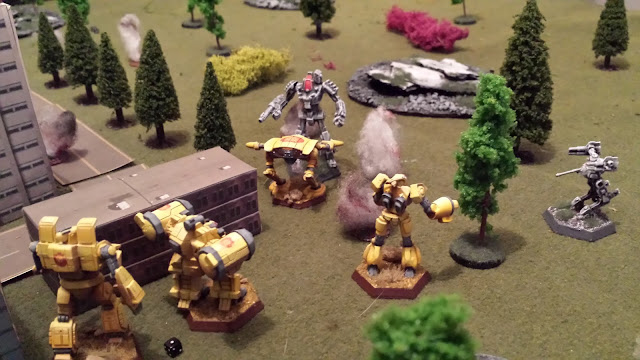 The warhammer was able to connect with a rear shot on the Bombadier, destroying the rear armor but not penetrating into the mech's internals. 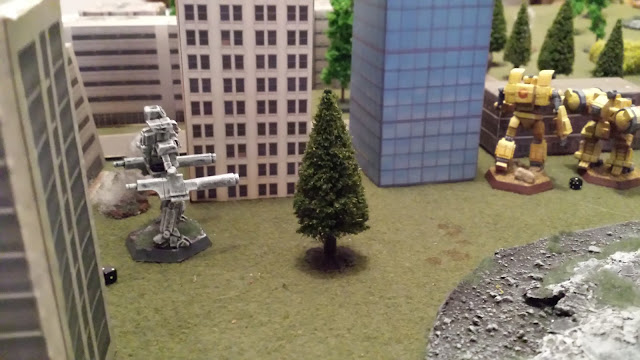 Meanwhile the Infantry force decided on a risky redeployment, under fire from a Longbow (1 shot would have downed the VTOL).  The fast moving transport was able to take evasive action and get clear. 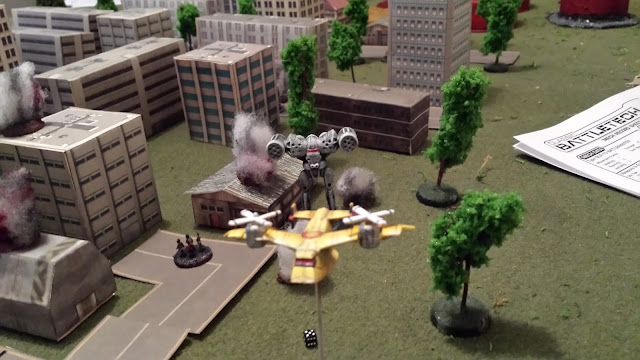 Meanwhile, the Battlemaster saw both of its legs blown off, but propped itself up on a single arm to continue the fight for one more turn. 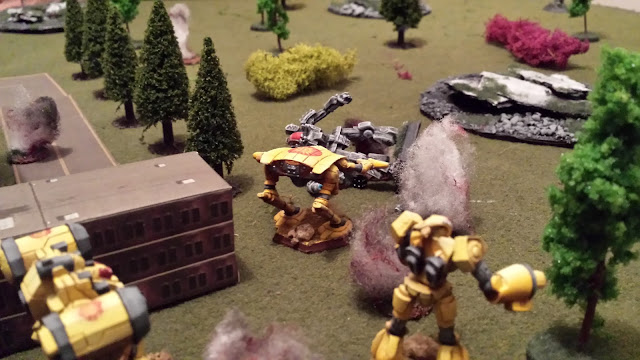 With the Battlemaster nearly finished, the other mechs turned to face the Warhammer while the King Crab was left to finish off his prey. 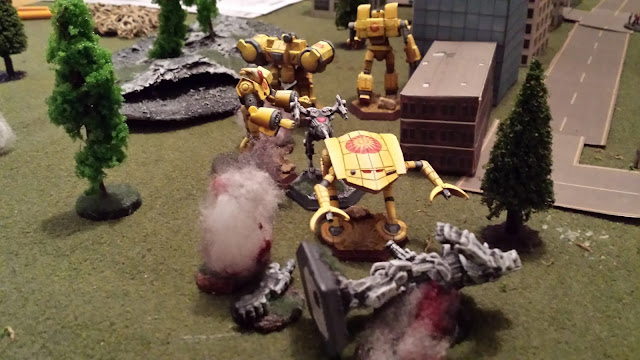 With no limbs left, the Crab finished the mech off by crushing the center torso with a stomp/kick. 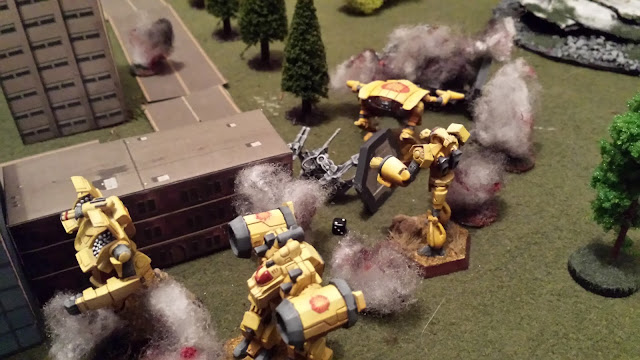 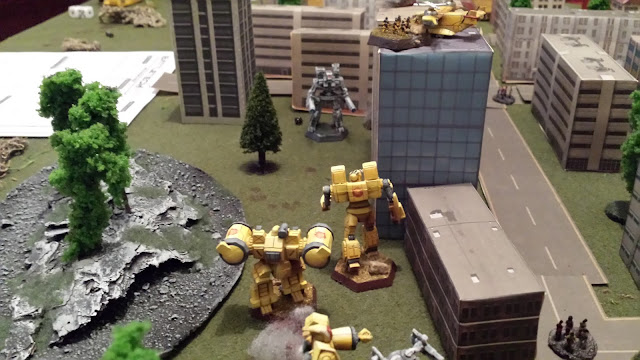 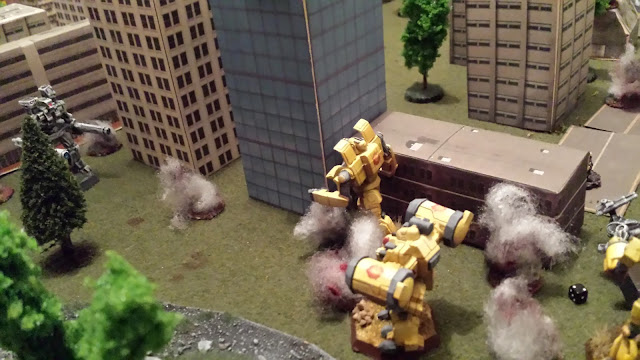 Two PPCs against a massive barrage of missiles... 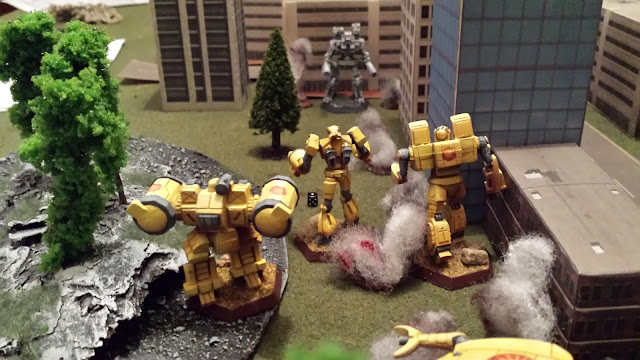 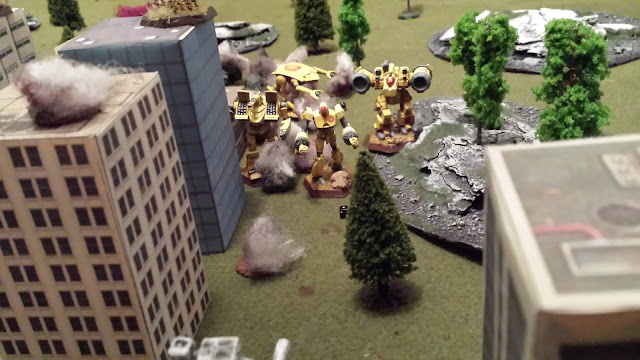 Turning towards the last mercenary in the area, the wounded Longbow, the Davion force moved quickly to finish it off. 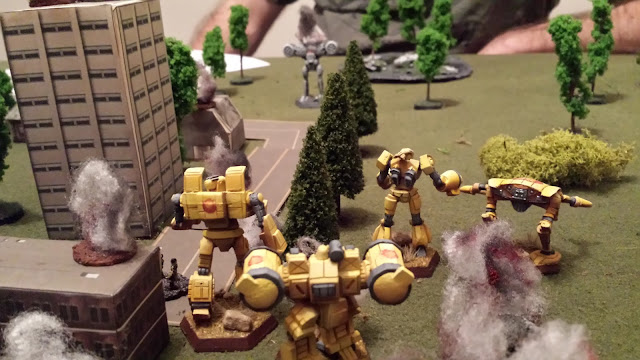 A headshot ended the game... 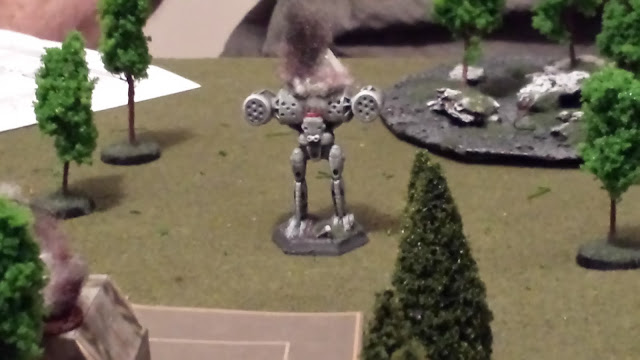