We last left our heroes basecoated and highlighted. Now we move on..

Step 9: Wash.  Wash, not dunk, and certainly not drown. The color and shading are set, we just want to get some dark into those cracks.  With a tiny brush, I carefully inserted Citadel Sepia Shade into the cracks and only into the cracks. This is slow work, but most of the time if you make a mistake (and a watery wash is tough to control) you can brush off the excess with a finger.  This step really transforms the mech, and works very, very well with the metal models in particular.

Step 10:  Secondary Colors.  In this case, a very dark gray (Dunkelgrau), so dark it looks black from a distance.  It provides a nice contrast with the bright yellow, and breaks up the mech a bit visually.  This is all brushed on - carefully, as the yellow will not cover that gray. If I had any major accidents I'd have to go back to the airbrush, using both white (to cover) and yellow. Thankfully, that didn't happen here. 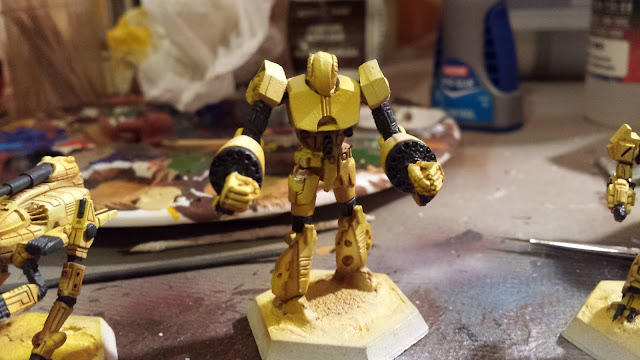 With the secondary color brushed on, it's time for highlighting.  Now, what follows is completely optional, and most Battletech players probably wouldn't have bothered to go this far. However, at this point I was having a blast and really wanted to bring these to the next level.  So I decided that rather than simply drybrush on the highlights for the gray, I'd go back to the airbrush.  That means lots and lots of masking, covering all the yellow parts of the mech. 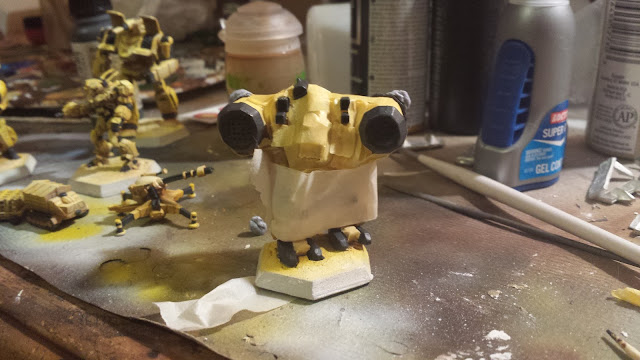 Almost the entire mech is covered. The masking process took far, far longer than the actual highlighting that follows.

Step 11b: airbrush highlight the second color. For this I used a Barley Gray, and then hit it with a lighter highlight of the same gray mixed with a good bit of white. 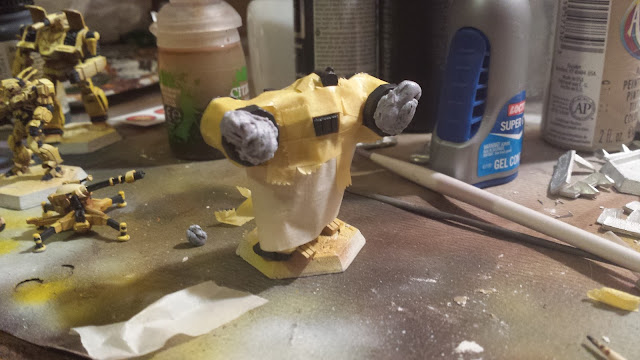 Again, drybrushing would have been way faster. 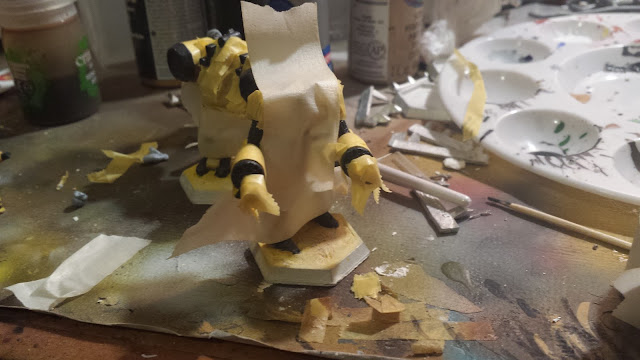 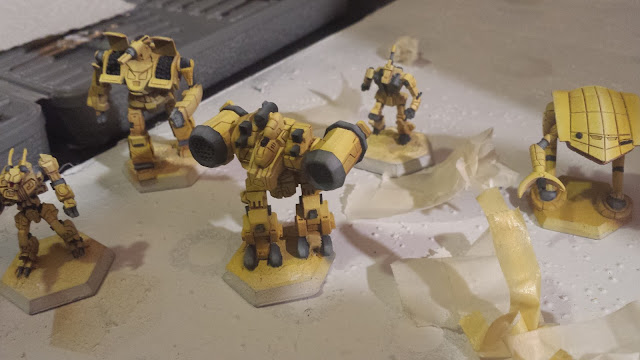 Funny thing about that King Crab: considering how little gray there was to highlight, I intended to just drybrush. I admit, part of that was that I didn't want to go through the hassle of masking.  But after I highlighted everything else, I just said "screw it" and freehanded the highlights for the King Crab, Stinger and Wasp without any masking at all. Incredibly, I did so without any mistakes.  Ok, there's a slight bit of overspray on one of the mechs, but no one but me will be able to see it unless I tell you which mech and where.   It's utterly invisible in the pictures.

Step 12:  Cockpits.  There's been a lot written on the internet about "jeweling" cockpit glass. I've never been happy with the result, whether I use an airbrush or a regular brush.  Sadly, this time is no exception.  I may have to try again on these later.  I tried the brush method this time around, brushing on a base of Gory Red, then watered down layers of Gory Red, Blood red, and orange, blending them together.  The blending was moderately successful, but I know it could be better. Practice! 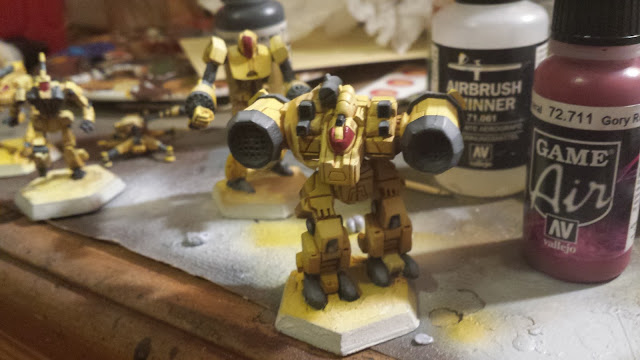 I added a few white dots as "lens flares", again with mixed results. 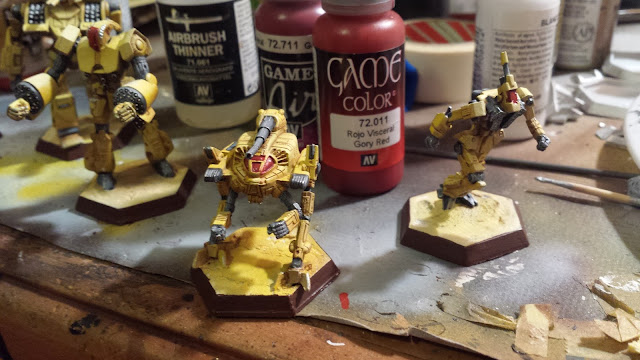 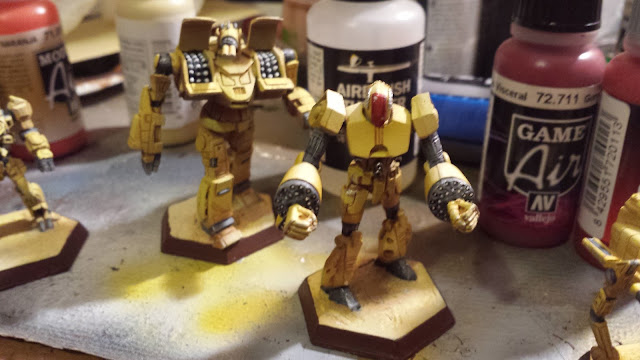 I even painted the missiles on the Crusader's collars, which was a bit nutty.

Step 14: Final Drybrush.  This is just to bring out the edges for some final highlights.  I used Buff, a sort of very light yellow, on the hard yellow edges, and straight White on the gray edges. This is the lightest of light drybrushing. You don't want to see the paint at all, just the illusion of light catching the edges. With the airbrush, the shading and highlighting is as good as I can get it, but this manual step hardens the edges and makes the thing seem like it's 50+ tons of metal. 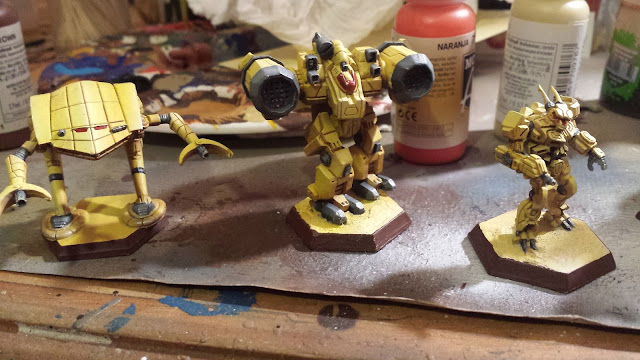 Step 15: Basing.  I simply painted the edges Flat Brown and flocked the base with white glue and Woodland Scenics Summer Grass. 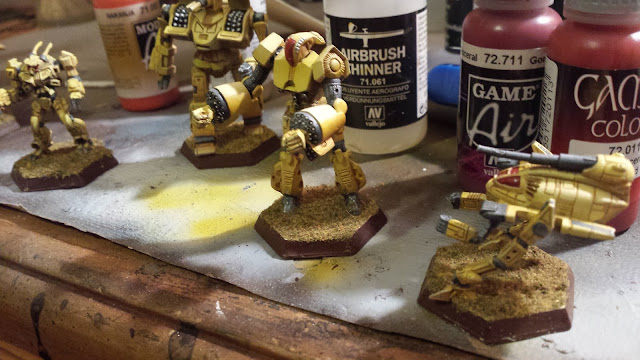 Step 16: Decals.  Obviously optional, but the 1st Argyle Rangers are a patriotic bunch.  I did this while the flocking was still drying. 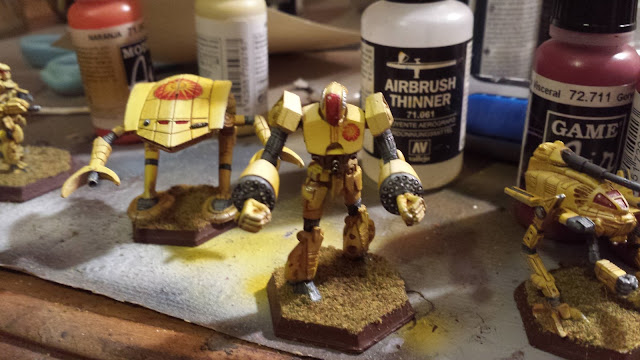 Step 17: Final basing touches.  Army Painter makes excellent little bushes for basing which are super easy to use. I also have a small container of desert colored stones that go with my color scheme.

Step 18:  Sealing.  I sealed these with Vallejo Satin Varnish via the airbrush.

And with that, we're done!  Take a look at the final product below. 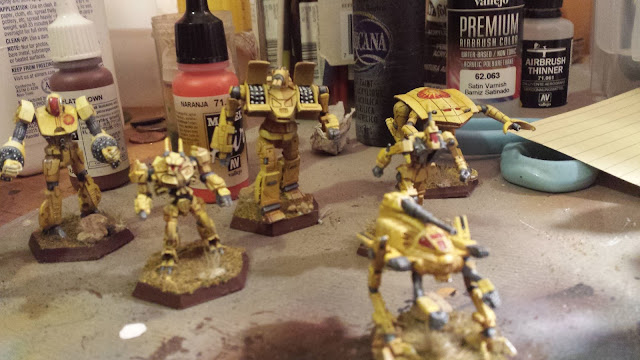 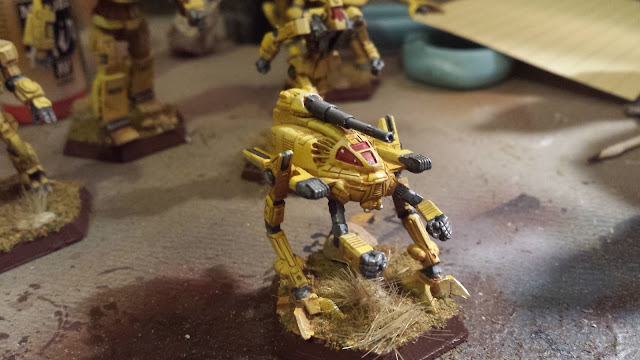