Ok, the new arrivals are here. Eight new mechs and an artillery piece are ready to go. I didn't snap pictures of the new mechs prior to starting, just the Battlemaster and MadCat below which are left over from the big Battletech Boxed set. The MadCat is just getting primed for now, as we don't play Clan Era games, but it's too cool not to paint, so I'll get to it later. The Battlemaster I will save for another time.

I thought I'd take some pictures as I work and post this tutorial-style as painting yellow is a real trial and someone might find my method useful. All these mechs are destined to join the 1st Argyle Rangers, my Davion force. 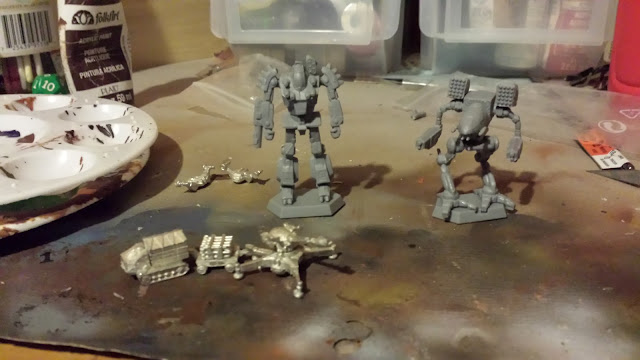 Step 1:  Priming.  There's a lot of debate about which color primer to use. However, since we're painting yellow, white is literally the ONLY option. Anything else will turn green immediately.


Step 2: Pre-shading.  Some people call this technique "zenithal shading", but I'm not going all the way with it.  Rather than black, I'm using a reddish brown which will look very dark next to bright yellow, but will blend without turning green.  Pretty much anything with any blue pigment will green the whole thing out. Careful which brown you use!  My favorite brown for this is Flat Brown, but the Flat Brown Air color from Vallejo isn't quite as red as the regular, and the regular gunks up my airbrush. Instead I mixed Beasty Brown and Burnt Umber which ended up nearly identical.


With the airbrush, I spray from beneath first, getting the undersides of everything, areas where the shadows are likely to be strongest.


I also get the joints, especially the knees, and anywhere where I might want a little extra definition. 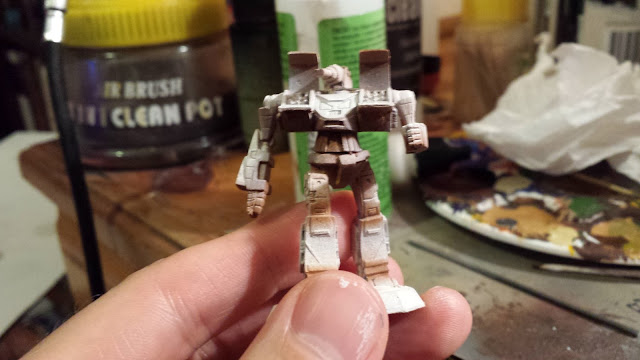 Step 3: Dial it back. In order to get the brown into the nooks and crannies, there's going to be some overspray onto areas that are raised and should be highlighted.  The yellow I'm going to use isn't going to turn green if it hits the brown, but it won't fully cover it either.  So, in step 3, I go in with regular white paint, and reclaim the highlight areas, taking a moment to also spray from above, inverting the preshade method. Now the brown is far more subtle, and we're ready to base coat.

Note: If I weren't using yellow, this step probably wouldn't be necessary. 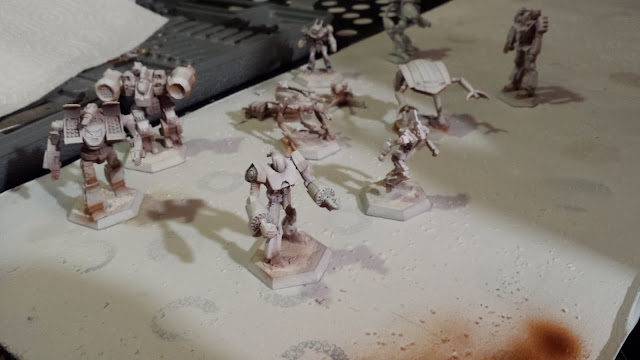 Step 4:  Primary color.  In this case I'm using Vallejo "Gold Yellow" which is darker than I'm going to end up with. It blends very well with brown however, and is my mid-tone.  Here I get full coverage, painting anywhere that remains white and overspraying a bit onto the brown. 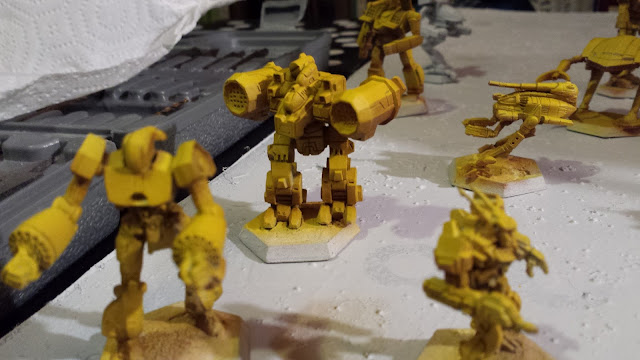 Step 5:  Back to White.  Turning the air pressure down a bit, I went back to white, spraying only the areas I want to highlight with a lighter yellow color. This is mostly the top of the model, but also in a few targeted areas.

Again, if I weren't going to a super light yellow for highlights, I might have been able to just spray right onto the previous color. Not with yellow. Here's my rule: Don't paint light yellow on anything except white. 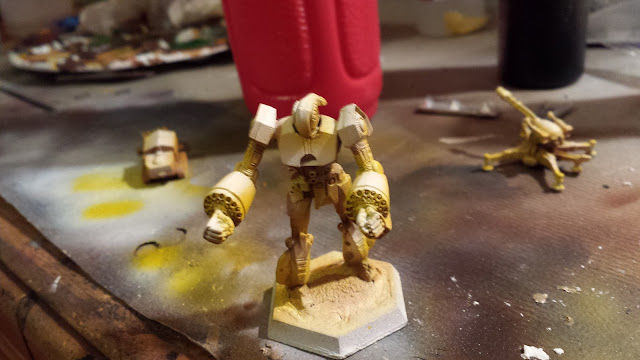 Step 6: Highlight color:  In this case, Lunar Yellow, also Vallejo Air.  Lunar Yellow struggles to cover even another yellow, but unlike Gold Yellow it turns green when it touches just about anything else.  So, carefully, I go over the white highlight areas.  The highlight is hard to see in the pictures, but it is there. 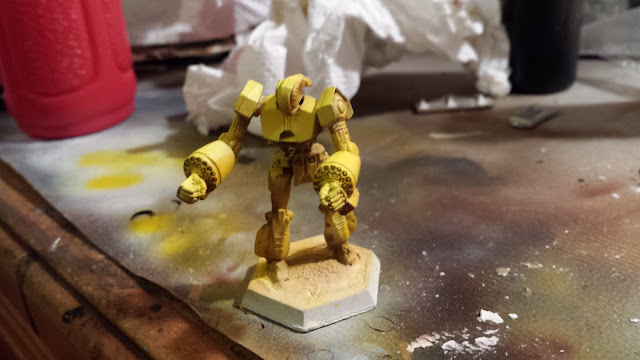 Step 8:  Back to White, Again.  This time, the white is for it's own sake, as the final highlight.  I dial the air pressure way back, put in some extra thinner and flow improver (white tends to clog up the airbrush, especially with low pressure), and very slowly apply the highlights. 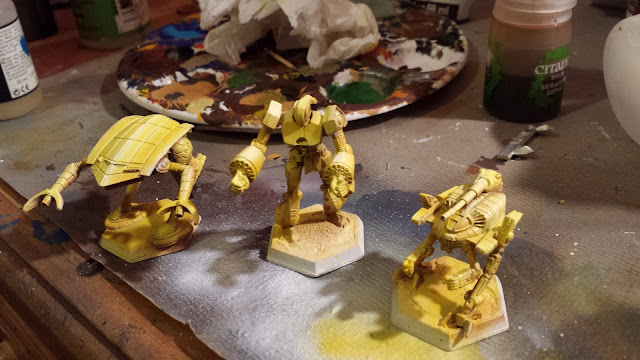 These look a bit brighter than they do to the eye, as they're under a strong light, but once we apply the wash and detailing it won't be so obvious.  The wash we're going to use (just in the cracks) will break up the surfaces and give the overall mech a darker look. 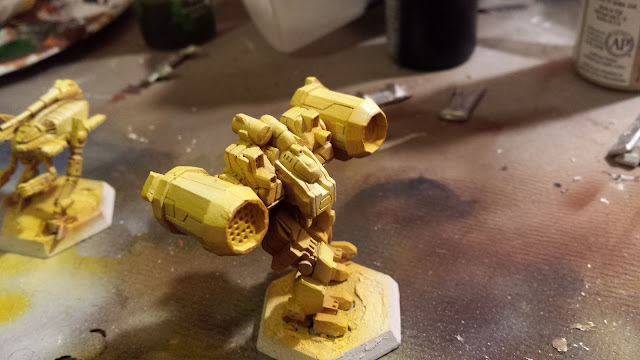 And that's all for today!  Painting all these with the airbrush took about 2 hours and change.  If I'd chosen another color it probably would have taken half as long, but in my opinion yellow is worth it.

A brief aside... some people out there talk trash about bright "candy colored" mechs. Obviously, I like bright colors for Battletech.  Part of that is the practical fact that the smaller the model the brighter the colors need to be for it to stand out on the table. Battletech is 6mm, and I think it's great to have them in a light color.  I have friends who do 6mm Cold War and paint camo, and the final result is them kind of fading into the table.  Things get forgotten.

But beyond that...  Say you're in the field facing a lance of Battlemechs.  Do you really think you're not going to see that 6 story tall monstrosity because it's painted in a drab camo scheme?  Well, the 1st Argyle Rangers want you to know

NEXT UP:  Wash, detailing and decals!
Posted by Unknown at 2:18 PM