Bill (from the AQMF forum) is at it again, this time playing through my Rally to Old Glory scenario, one of my favorites.  Here's some pictures and Bill's write-up. 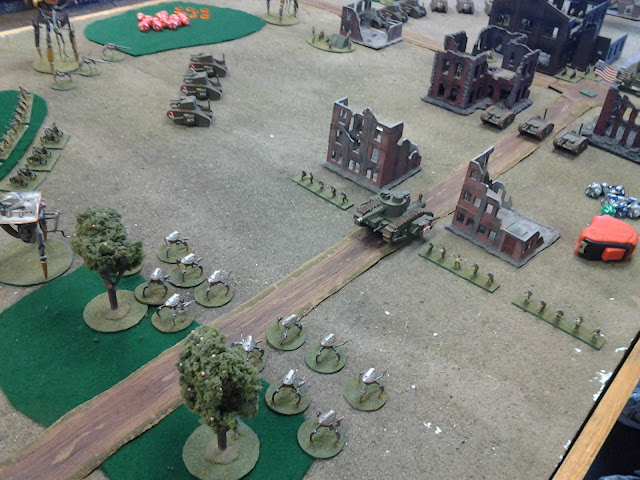 Bill writes:
"We did Old Glory today. Had 2300 points of Martians vs 1800 points for the humans. The Red Martian failed to appear as scheduled. 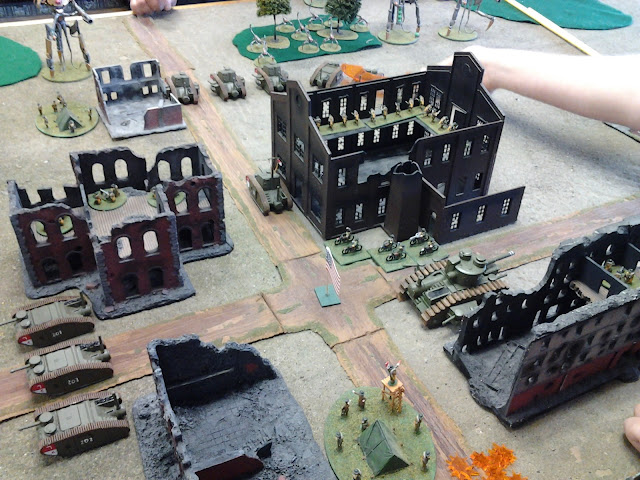 The martians went first an immediately began closing on the town. Heat rays licked out at the humans, killing 5 tanks, an artillery piece, and an infantry stand.
Human tanks position themselves to shoot. The monitor on the west double moves to get away from the 12 drones that were closing on it. The veteran take 1 point of damage and weapons malfunction. The hmgs wipe out a unit of scorpion drones. The monitor on the east side targets the grenadier and scores a direct hit with msin gun. The resulting explosion is quite pleasing. 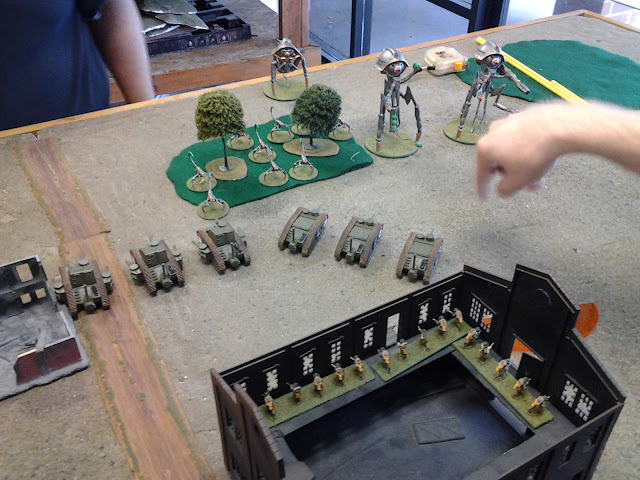 The martians go first again. They continue to close the town. Black dust covers one building, killing 3 infantry stands. The slaver sets it on fire. The humans win the roll off for the veterans heat ray and kill 2 drones. Other martian fire kills 2 more tanks and another artillery piece.
The humans circle the wagons. The rough riders immobilize one slaver while the other is destroyed by a direct hit from the last artillery. This leaves the scorpions stuck. The veteran w/bd is immobilized by the other rough riders. 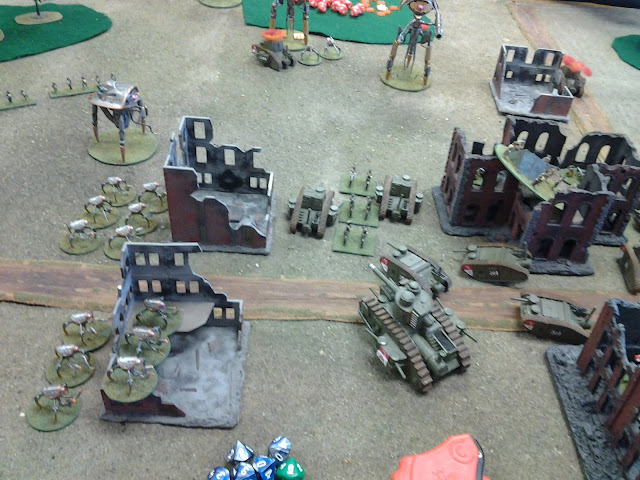 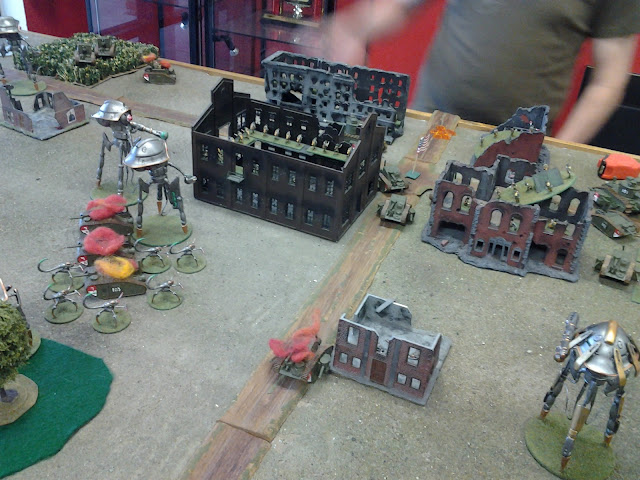 The martians go first again. The slaver breaks free but the veteran w/bd doesn't.
The other veteran double moves to take over the scorpions. Three assault tripods on the east side of town kill the mark 4 and the last artillery piece. On the west side the drones kill a mark 3 and damage the mark 4. The humans move as best the can. Industrial might brings another mark 4 in zone 5. Hmgs kill 2 more scorpion drones. All other fire is ineffective until the other hmg unit shreds an assault tripod and it blows up. 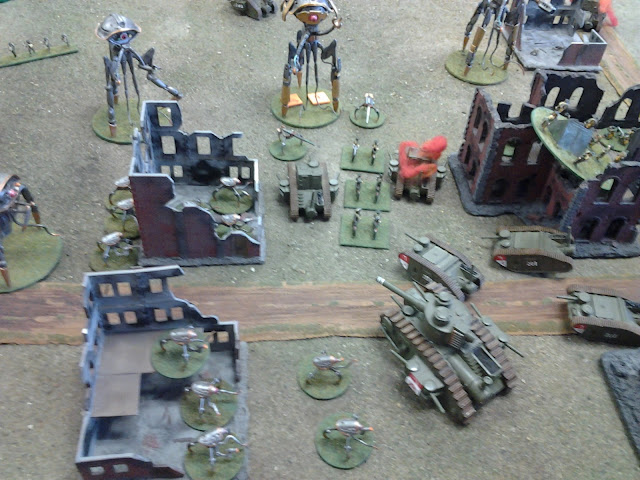 The humans finally go first. The hmgs on the east side blow up yet another tripod. The remaining tanks kill a couple more drones. The martian drones rush the town. They kill 5 infantry stands and a command unit. Heat rays kill 2 more tanks. 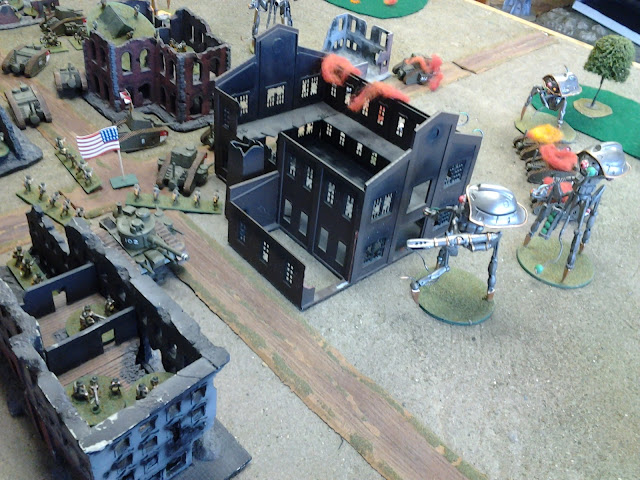 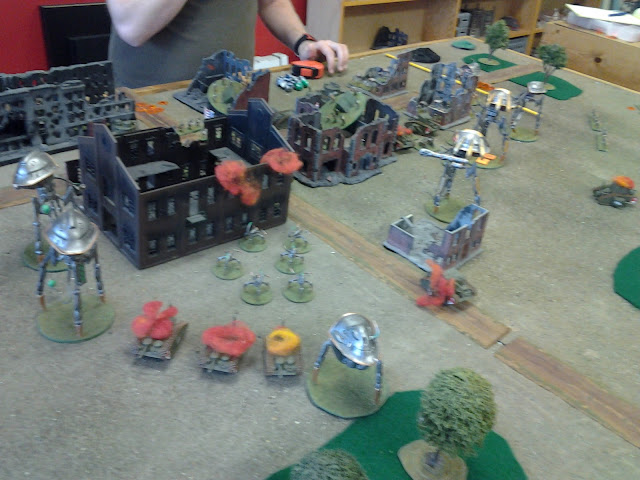 The martians go first on turn 5. The drones swarm everything they can reach. The tripods close in. After the ripping and heat rays are done, only a damaged mark 4 and 1 hmg stand are left. Industrial might brings a unit of mark 3's in zone 3. All fire is useless. The rough riders ( amazingly still mostly alive ) head for old glory. The martians finish wiping out all units within 12" of old glory. Industrial might brings another mark 4 in zone 2. The martians are 3 units from breaking, so the humans try for kills. A drone dies finishing a unit, but that's all. The remaining drones finish off the rough riders and 2 mark 3's are killed. 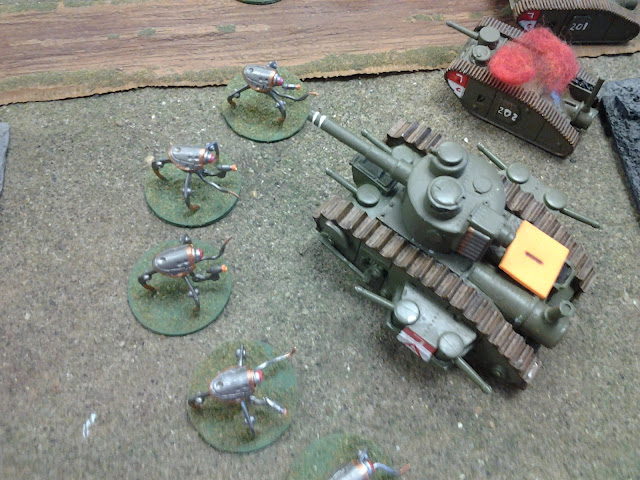 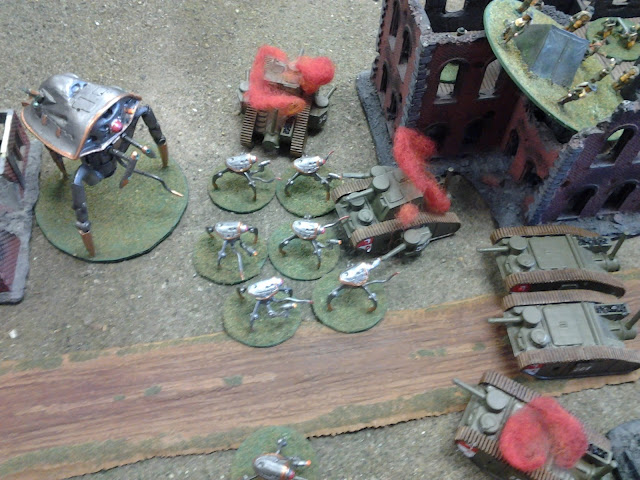 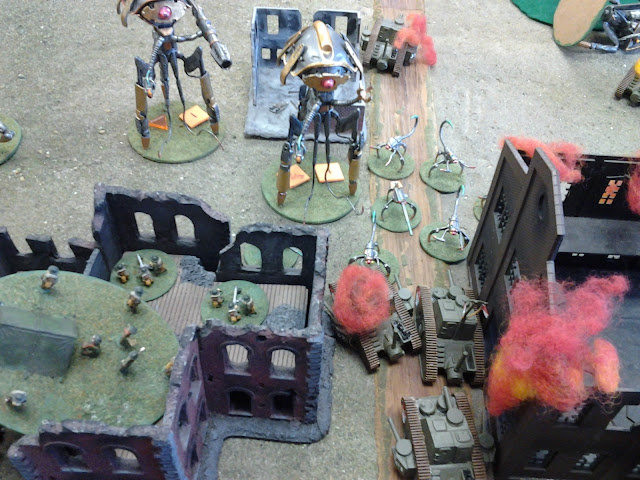 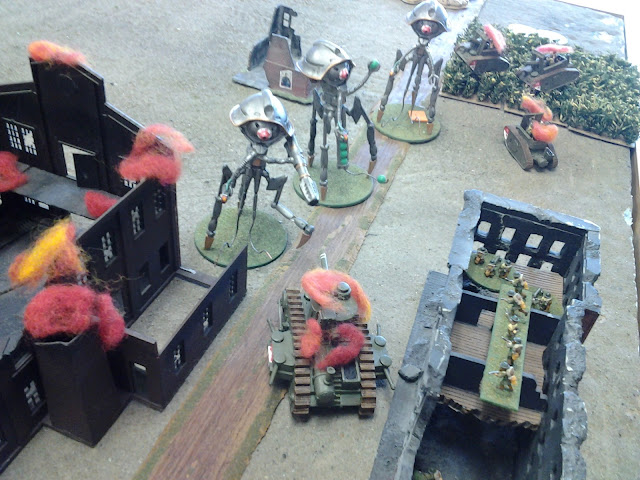 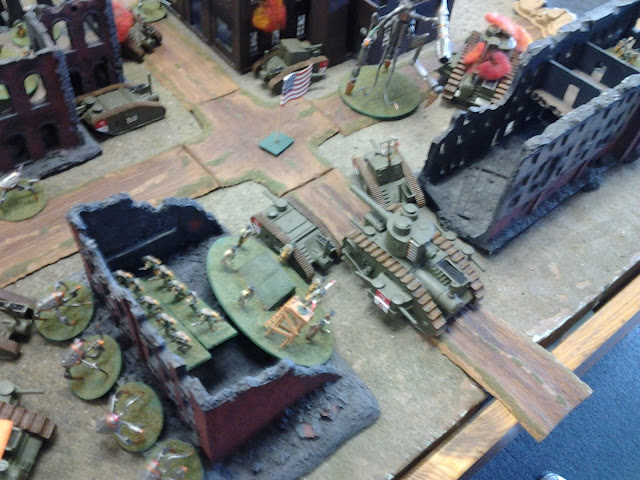 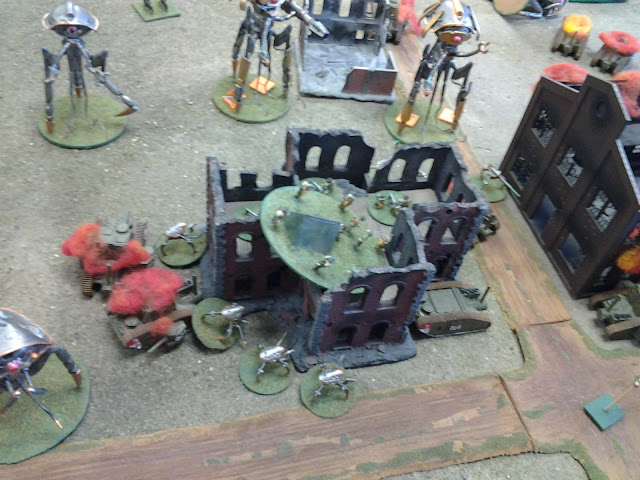 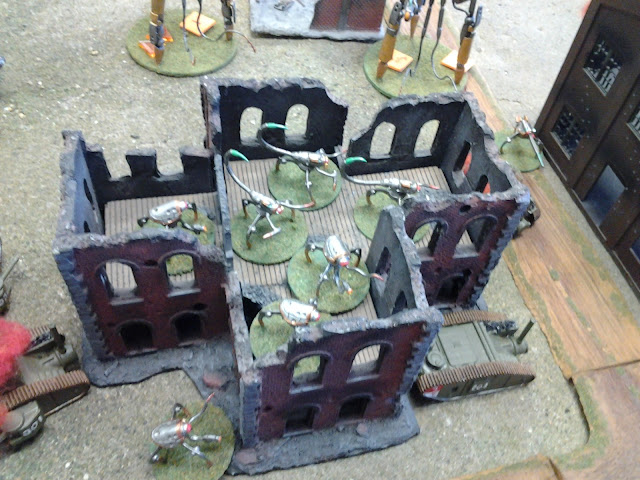 Game ends in a Martian victory. It was very close. Even though the humans were pretty wiped out, the martians were only 2 units from breaking. There were 2 drone units with only 1 left, and the veteran w/bd had take 4 armor damage.
It was a very good game." 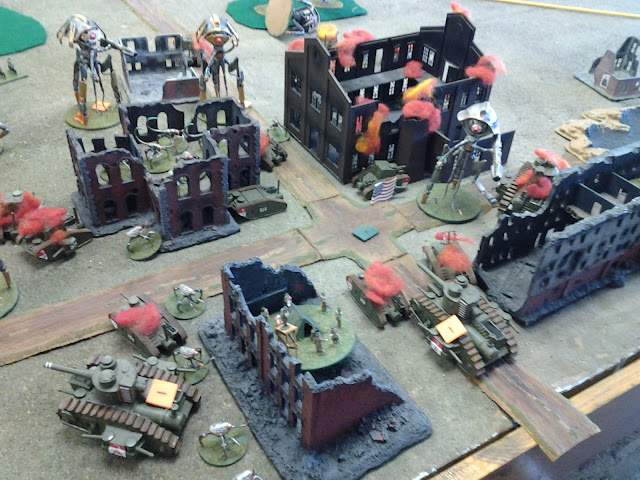 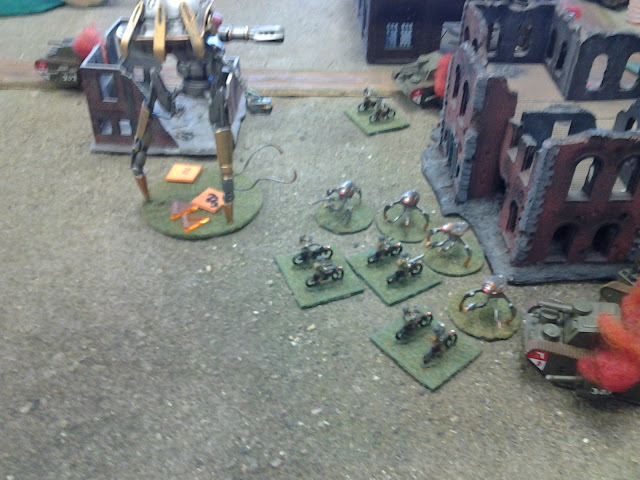 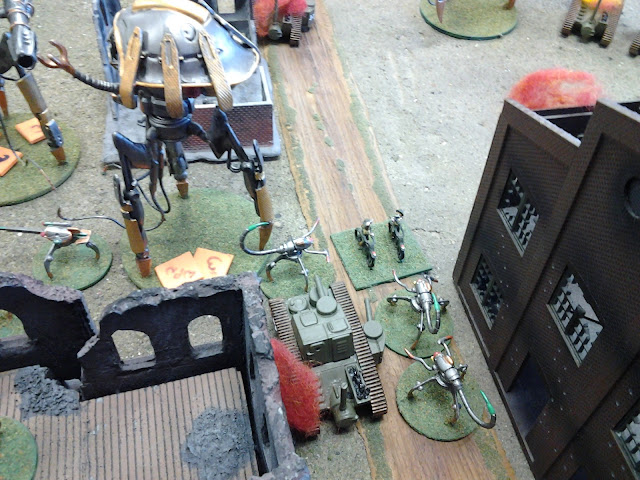 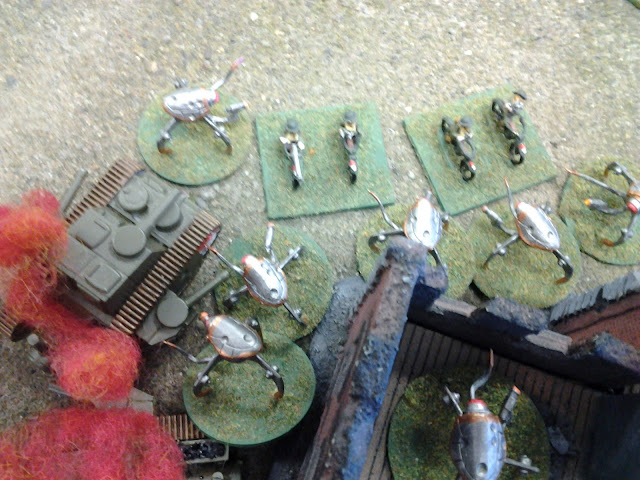 Email ThisBlogThis!Share to TwitterShare to FacebookShare to Pinterest
Labels: AQMF, Letters from the Front