Bill from the AQMF forums asked to participate in the Vicksburg Campaign, despite living quite a distance from me. Quite flattering!  I've hosted some of his stuff here before, so I figured why not?

The main event is his big 8 player game at GenCon, which will be the Battle of Bolivar County. First, however, he played a smaller game with his regular group as a kind of prelude. I wrote up the briefing below to give to his players. It will be roughly the same as what the GenCon players get. 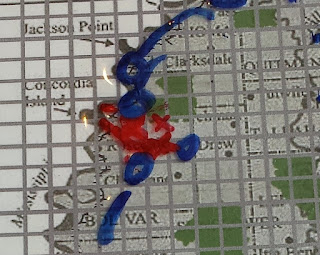 American Briefing:
Spring, 1914.  In the shadow of the attempted Martian breakout at Memphis, the 29th Infantry division attempts to hold the Mississippi Delta region against a Martian incursion.  General Pershing believes that this attack is a sideshow, a mere diversion to get the Americans to pull troops off of the lines around Memphis.  He therefore leaves the 29th, the "Blue and Grey" Division, nearly alone to prevent a Martian breakthrough south of Memphis.

Nearly, but not completely alone. The 29th's stalwart East Coast soldiers are supported by an additional unit, the 155th Infantry Regiment, the last surviving regiment of the 39th Division which was slaughtered in the mass retreat to the Mississippi Line a year before. The 155th, consisting of local Mississippians and recently reinforced by local militia units, has refused orders to fall back to base camp in Alabama for retraining, and has refused to merge with another unit fighting elsewhere. In a moment of rebellion, they've renamed themselves the 21st Mississippi, after the famous Confederate Regiment from which they could trace their lineage, and declared their intention to fight for their homes against the Martian invaders. With the situation along the Mississippi being what it is, the Federal government and the General Staff have little time to deal with this iconoclastic regiment, and the 29th Division is glad of any help it can get.

Now, with battle raging north and east of Memphis, four battalions of the 29th Division stationed in northern Mississippi have detected a massive Martian force which was able to slip across a sparsely defended section of river and into Bolivar county. Colonel O'Malley has dispatched scouts to learn the full disposition of the Martian force, prior to bringing the full force to battle.

Martian Briefing:
The Overseers have determined that the recently conquered human settlement known as "Memphis" shall host an unstoppable Legion which will break out to the north and east of the city. Vast forces have been building up there for some time and the time for action is approaching.

You and your pod shall not have the honor of participating in this glorious endeavor. Instead, you will have other opportunities to prove your worth. Orbital intelligence suggests that the are immediately south of Memphis is sparsely defended. While the territory in question lacks much strategic use on its own, the Overseers believe that if the area is sufficiently threatened, the pitiful humans will divert resources that might otherwise protect the areas around Memphis.

You are to proceed east across the river, and destroy any human defenses that stand between you and their support structure.

Shortly after the landing force crossed the river, intelligence reported a large concentration of human defenders.  Due to cloud cover, the size and composition of the force is unknown.  A scouting party must probe the human lines and learn what it can before the pathetic humans can be brought to battle properly.

Now, without further ado, Bill's report (OOB at bottom):
"This fight takes place when the reconaissance forces both sides have sent out collide near Harney's farm.

The Martians went first and all tripods moved full speed ahead. No humans were in range, so they all move full again.

The rough riders move out, covered by the tanks. The shooting starts, but is ineffective until the mk 3's open fire.
They score 7 hits on one of the assault tripods and it crashes tp the ground. The rough riders keep moving. 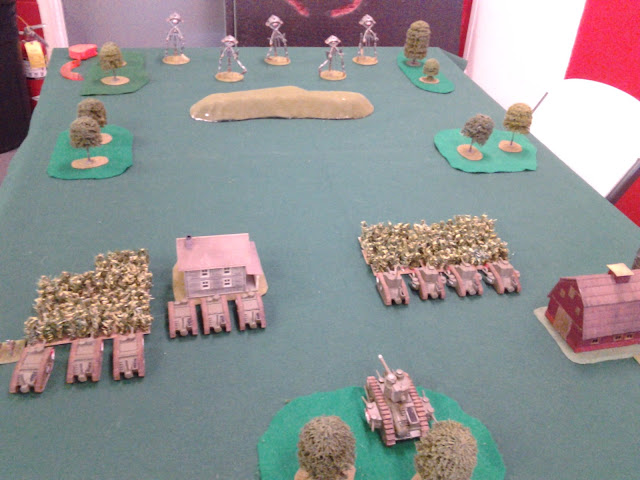 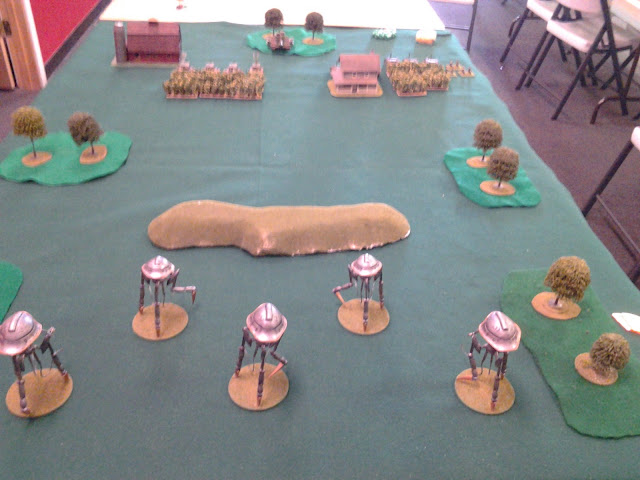 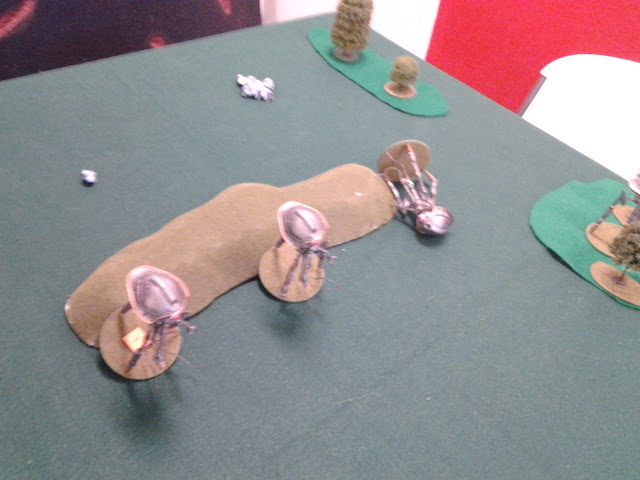 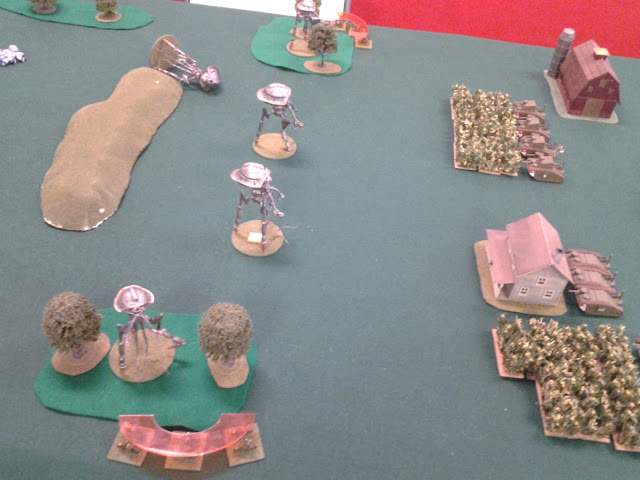 The Martians go first again. The scouts go after the rough riders, sweeping them with their heat rays. Only one stand is killed. The assault tripods shoot the mk 3's , but miss. They keep pushing forward.

The rough riders attack the scouts but only get one hit. Time to hide in the woods. All the tanks fire at the 2 assault tripods. One of them goes up in a blinding flash, leaving only a boiling black cloud. The Martians are in big trouble. 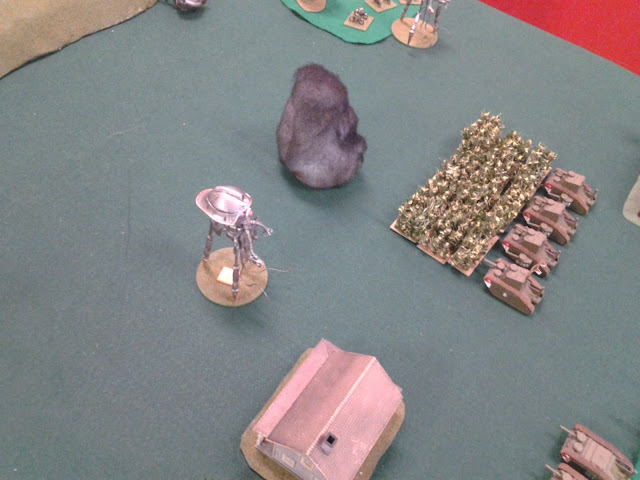 The Martians continue to go first. The scout breaks free from the tow cable. All 3 remaining tripods keep advancing. Heat rays kill 2 tanks, causing one to run away.

The rough riders move out again and by the end of the turn they are close to escaping. The tanks target the scouts. One takes 2 armor damage while the other takes 5 armor damage and suffers a movement malfunction. 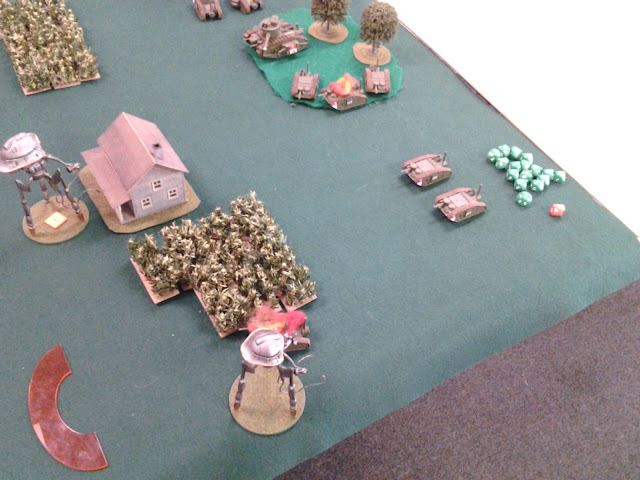 The Americans finally go first. The rough riders exit the table. The tanks shoot the scouts again. One takes another point of damage bringing to 3. The other takes 3 more and now has 8.

The Martians lose both movement roll offs, sending that scout 20" the wrong way. The other scout kills 2 tanks. This opens a hole for it to get away if the Martiand go first. The assault tripod kills a mk 3. 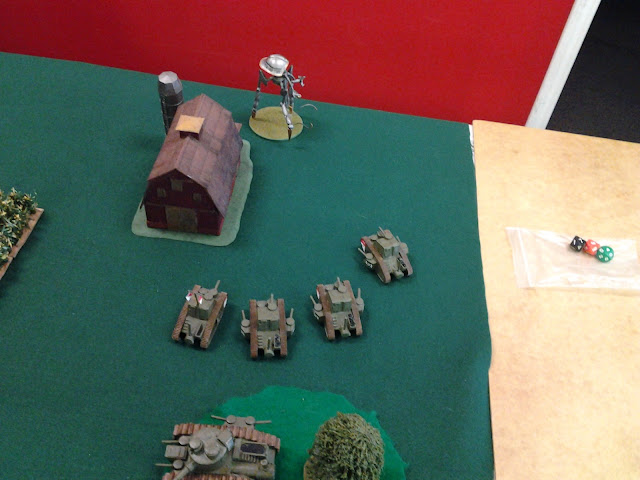 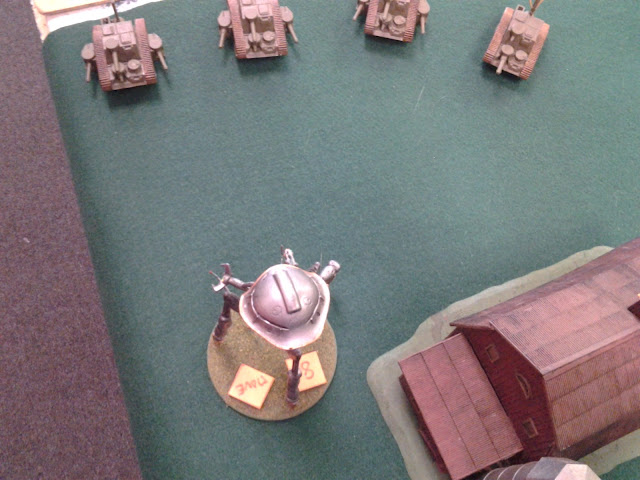 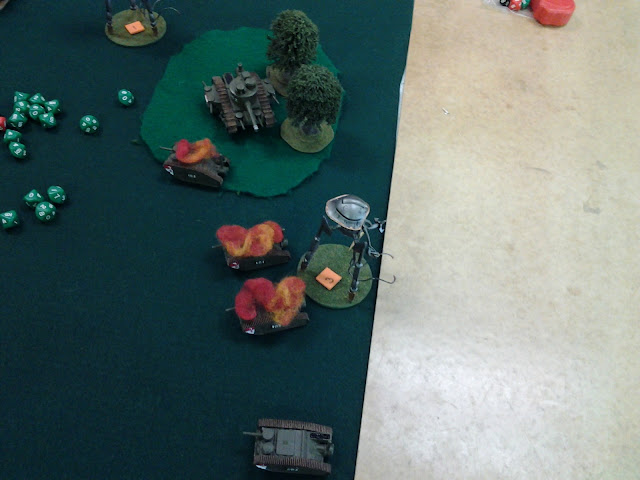 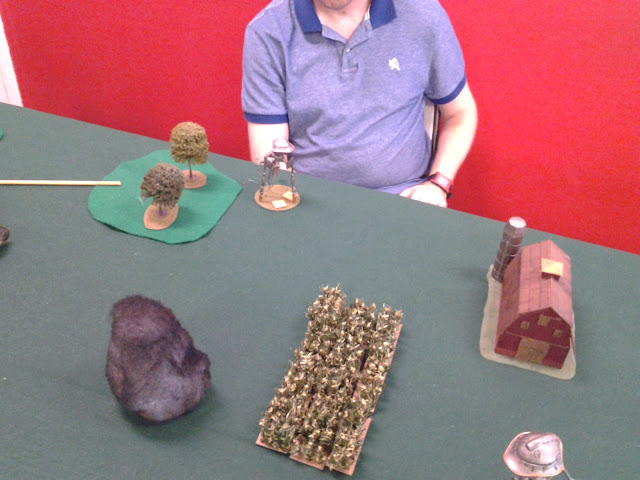 The Martians go first. The scout exits the table. The other scout moves back towards the humans. The assault tripod is almost off the table as well.

All the tanks bur 1 let fly at the assault tripod. They get 8 hits. Three of those get through and a 10 is rolled. That one explodes, taking the command tank with it. The one remaining tank pounds the badly damaged scout, and it blows up a well. 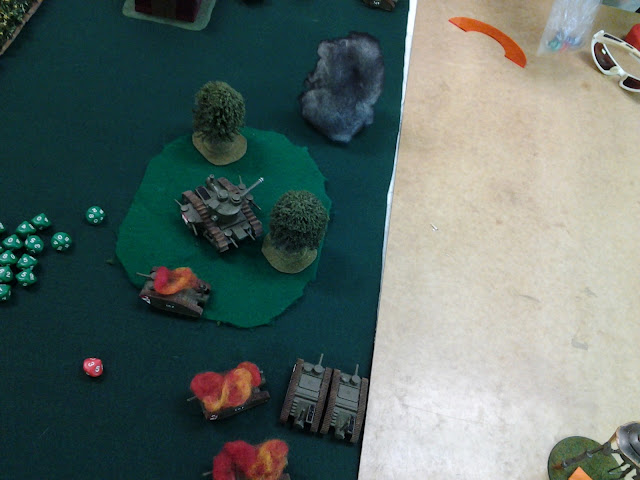 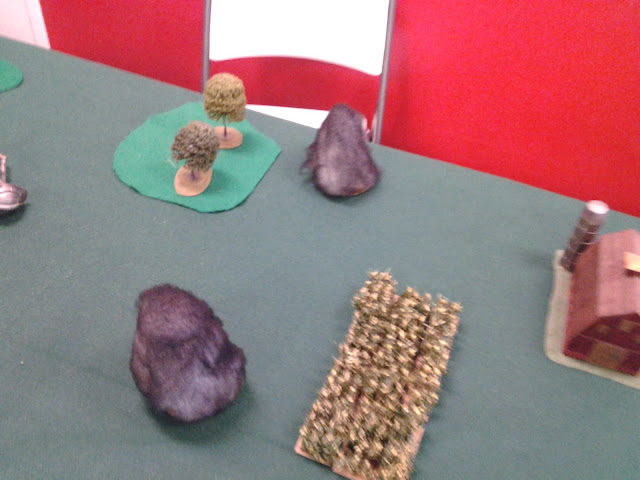 The remaining scout flees from the humans, taking heavy fire and multiple hits. More armor flies off, bringing it to 7 points of damage. Once out of range, the scout pauses briefly to assess the damage and then proceeds on his mission to find the main human force.

Sgt Williams and the remaining rough riders slowly drove their bikes up the wooded hill. At the edge of the woods, they all looked to the west, and froze in shock. There, not more than half a mile away, were more Martians than they ever wanted to see. Three tripods seemed to be conferring. The humans started counting. When they were done, they had at least 20 tripods and upwards of 40 drones. The Colonel had to know about this. It was definitely time to leave. Tomorrow was August 1, 1914. It was gonna be a hot one. Sgt Williams led his men back down the hill and they raced away.