Spring, 1914.
After the Battle of Panther Burn, the American survivors fled northward, melting into the bayou. Under the unofficial command of Captain Tritchel, the highest ranking officer to survive the battle, they've gone dark, splitting the shell of a battalion into four understrength companies to more easily avoid detection. From the bayous, Captain Tritchel plans his next move against the numerically and technologically superior Martian force. 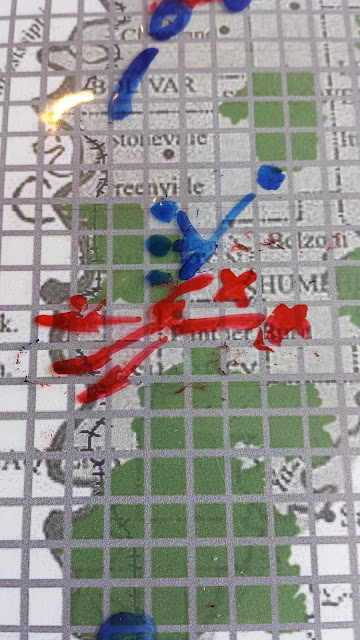 Word of the disaster at Panther Burn arrived quickly at division HQ in Vicksburg, thanks to aerial reconnaissance, and the four battalions which had been guarding the Yazoo river in the north (where the General had wrongly assumed the Martian strike would come down hardest) were ordered to board trains and proceed south with all haste. It would be a race - would they establish positions on the river in time, or would they find that the Martians had already crossed it?

In the north, battle was immanent in Bolivar county, but both the American commander, Colonel O'Malley, and his Martian counterpart were deploying cautiously, testing each other and looking for a weakness (this battle will be fought at GenCon in a few weeks - stay tuned for details). But for now we must draw our attention back to Captain Tritchel and his efforts to threaten the Martian supply lines in the vicinity of Panther Burn. 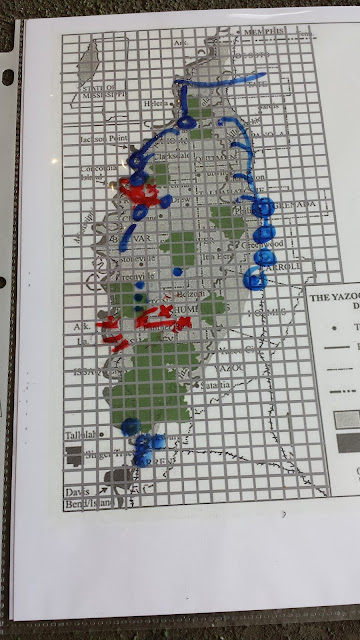 Considering his situation deep in the bayou, Captain Tritchel squarely faced the difficulty of his situation. Low on ammo and low on coal for his tanks, his scattered men were little threat to the Martians. Further, the Americans had been forced to abandon most of their artillery pieces, and even some undamaged tanks which were out of steam. Yet his scouts had reported that the Martians were moving with great haste, and had left American equipment where it lay rather than stopping to destroy it.

What he did have was manpower. He even had tankers, artillery specialists, and repair crew, mostly sitting around camp, useless.  Tritchel had no choice but to salvage what he could in a daring raid back towards Panther Burn. Two large contingents of Martians had been seen heading east towards the yazoo, leaving one group behind, based in the vacinity of that same small town so many men had died to defend. Regular patrols were sent out from there, mostly solitary tripods. But these lone tripods could very quickly call for help. Mixing his specialists with the infantry, Tritchel intended to quickly grab as much equipment as he could and get back to camp.

Full scenario and OOB at the bottom of the post. 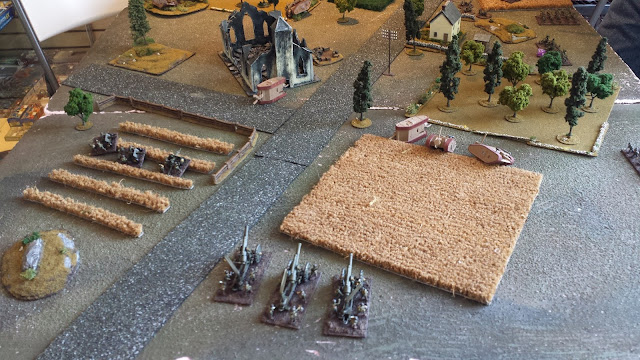 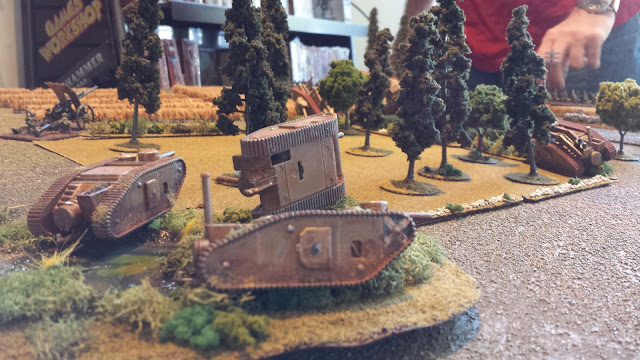 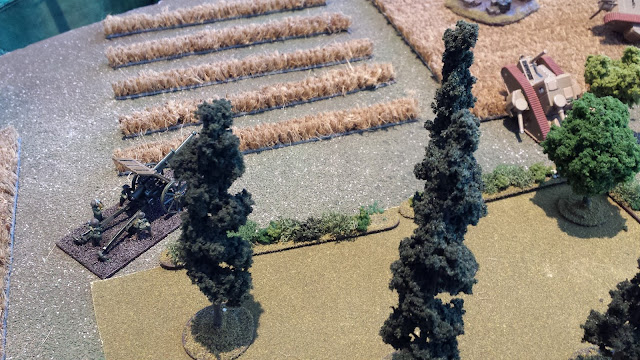 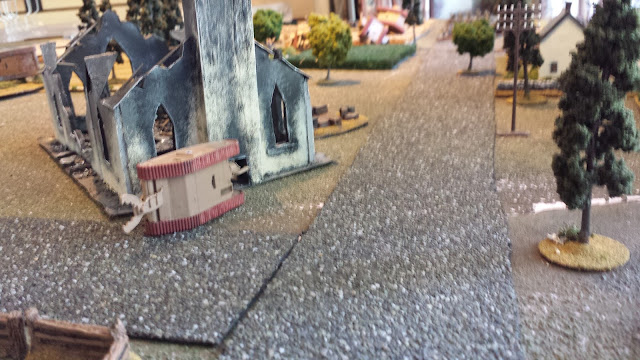 Captain Tritchel orders his men forward to grab what they can before the Martians show. 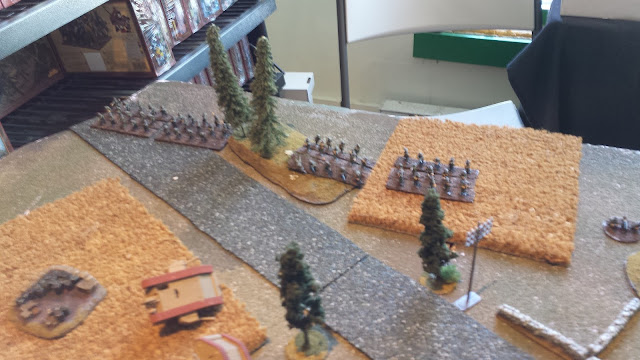 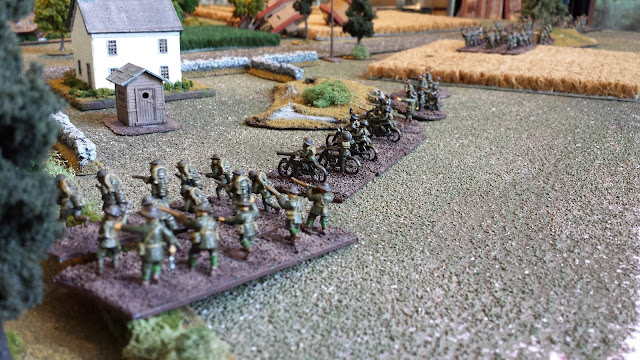 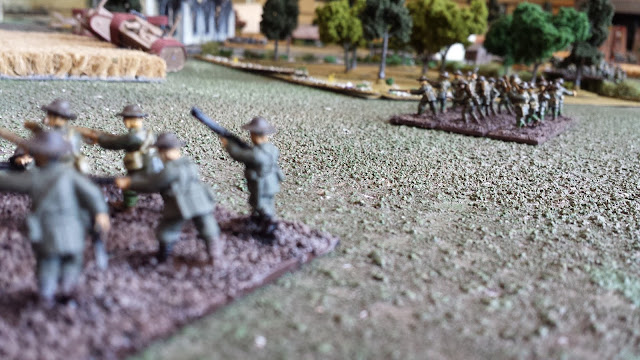 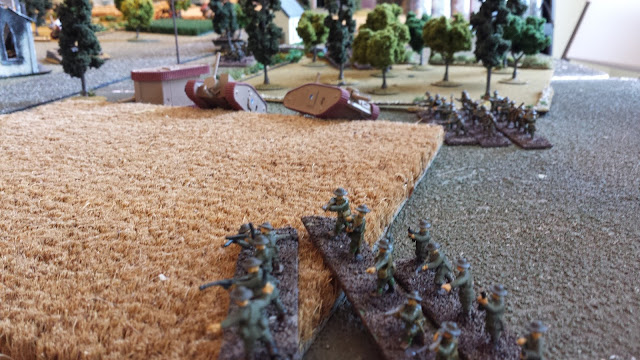 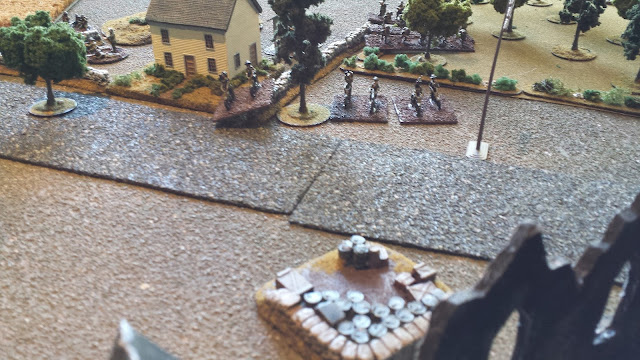 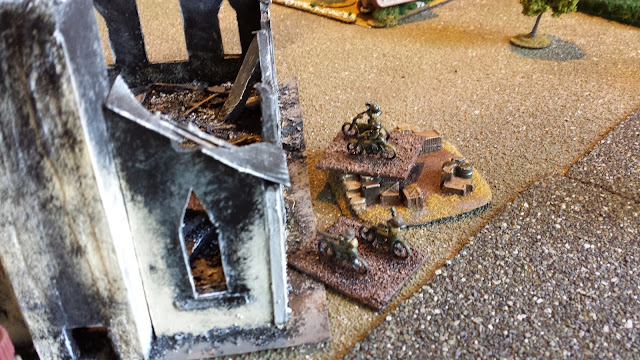 Some doughboys take the coal for the tanks. 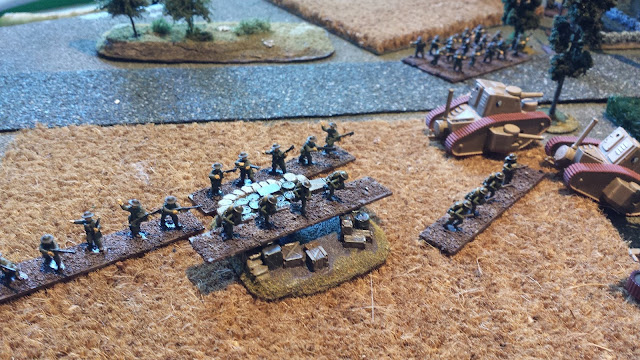 Just as the first group of tanks becomes operational, a Scout Tripod appears. It simultaneously fires at the tanks, and calls for backup. 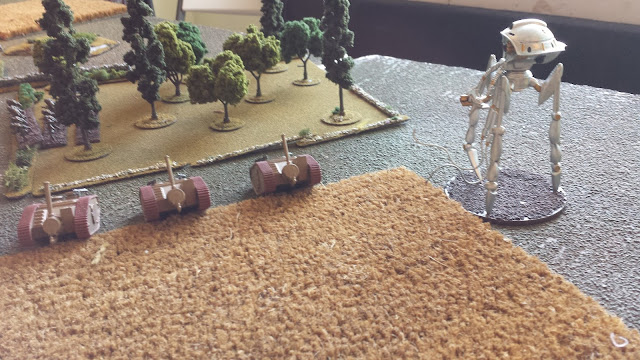 The tanks escape, but the Tripod stalks other prey, the big Heavy Howitzers. 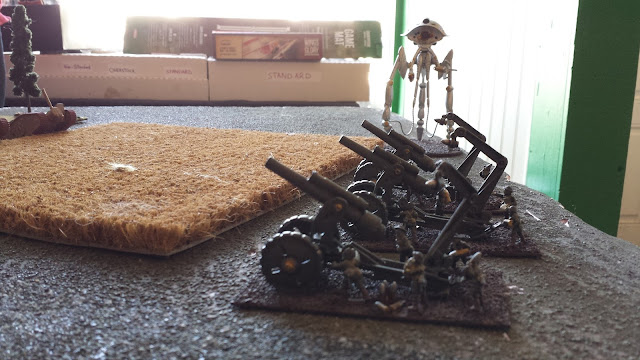 However the tripod's aim is poor. 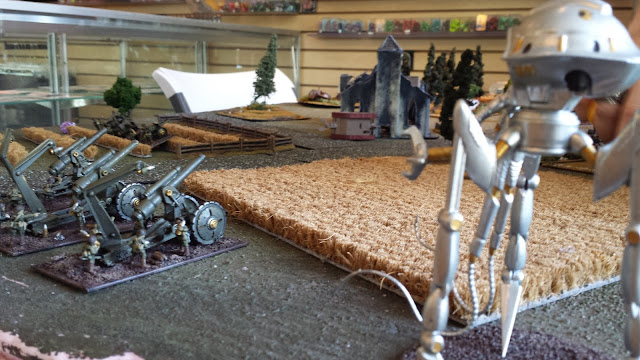 The tanks turn with a spray of steam and fire into the Scout. 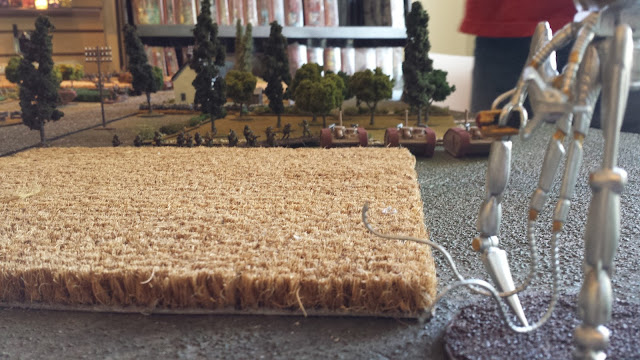 If falls into a pile of twisted metal. 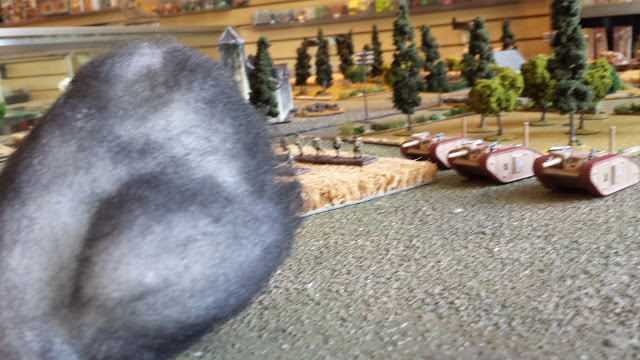 An assault tripod appears on the opposite side of the board where some infantry struggle to get some MKIIs operational. They've also taken the Anti-Tripod Gun, but without the tanks, they can't turn it around to face the Martian threat! 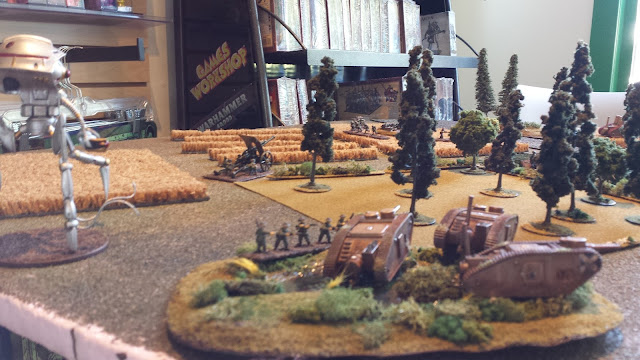 No one can say Captain Tritchel isn't bold - rather than try to exit his forces quickly, he goes for the kill. Having already killed one tripod, he decides to try and destroy or drive off the patrol and hopefully take everything. 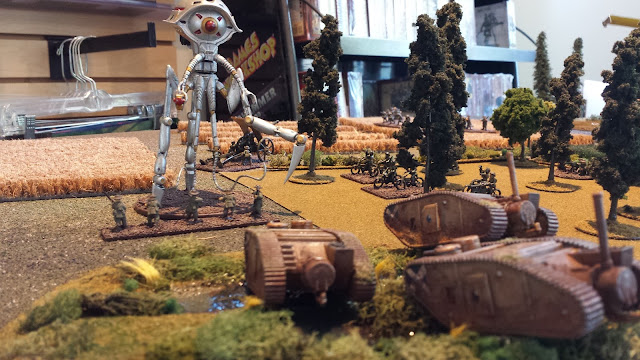 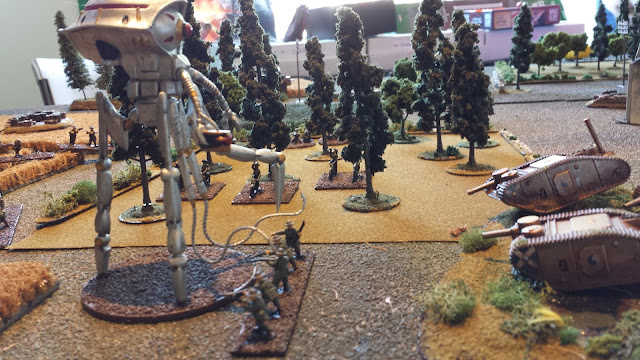 The tripod takes fire from all sides, but remains undamaged. Rough riders finally manage to hold it still with cables around its legs. 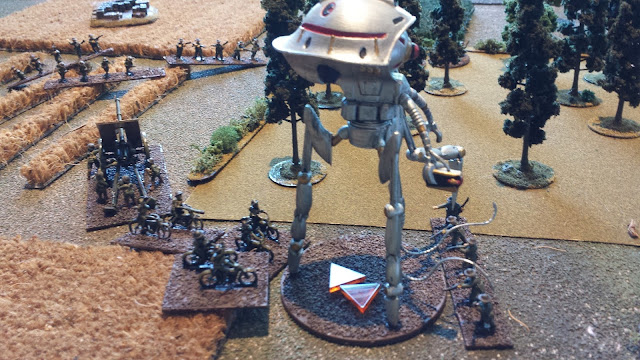 Meanwhile, near the fires of the burning scout, tanks begin to tow the heavy guns out of fight. 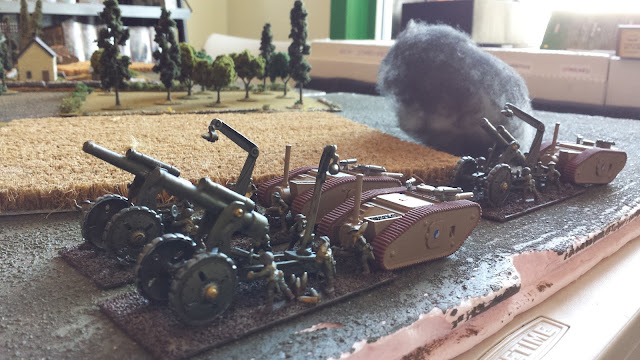 The assault tripod is finally damaged, but it doesn't need to move to fry a tank. The other two rout. 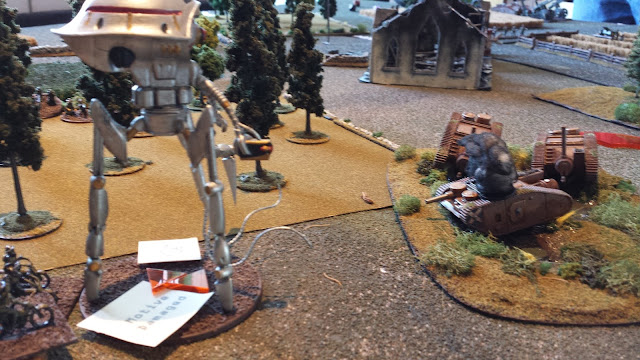 As Captain Tritchel orders the newly repaired MKIVs to join the fray rather than withdraw, another Scout arrives, rising out of the trees across the road and destroying a tank. They also rout. 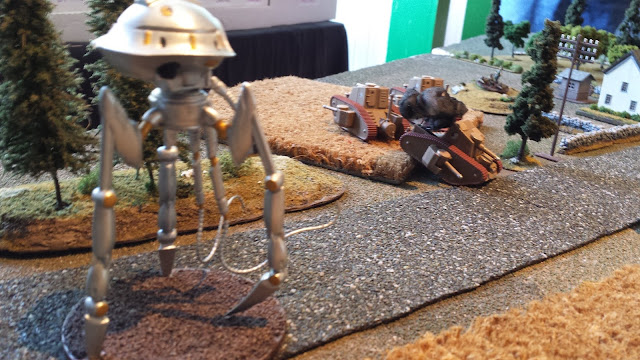 The Martian scout gives chase, destroying them. A serious blow, not only for this engagement, but the next as well. 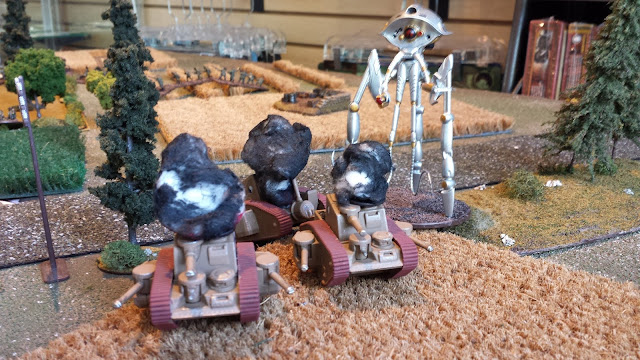 The fleeing tanks are also destroyed by the immobilized tripod's heat ray. Captain Tritchel was heard to swear and mutter "maybe I should have withdrawn quicker." 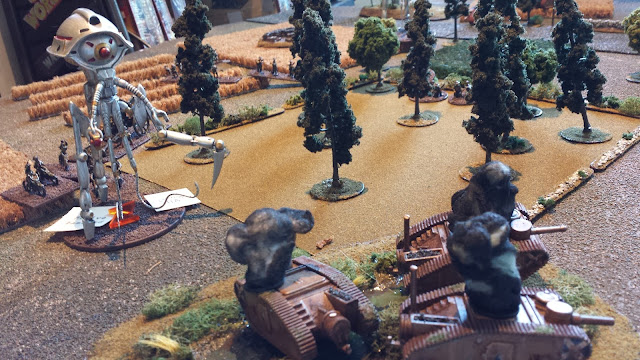 But soon, fire from machine guns and rifles finished off the immobile tripod, causing the scout to flee from the now well-armed American force. A heroic Victory for Captain Tritchel. With the scouts gone, he can take his time and gather whatever is left. 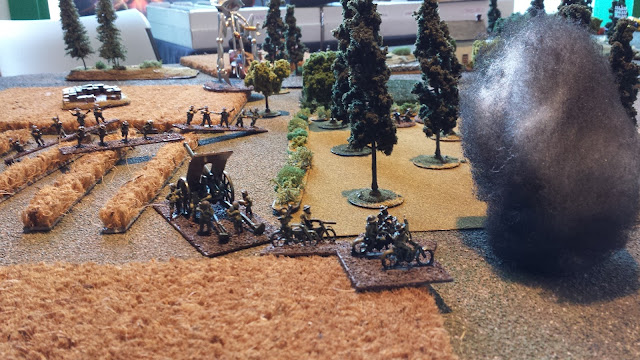 When he returned to base camp, Captain Tritchel was surprised to find a runner from Division HQ in Vicksburg. His unofficial command over the survivors had been confirmed, and for his actions getting his men out, he'd been promoted to Major.  His men congratulated him but as they slapped their commander on the back, their attention was arrested by the sound of a motor.  An bi-plane was trying desperately to climb as a heat ray licked across his wings, setting them ablaze. The company watched as the plane plummeted. 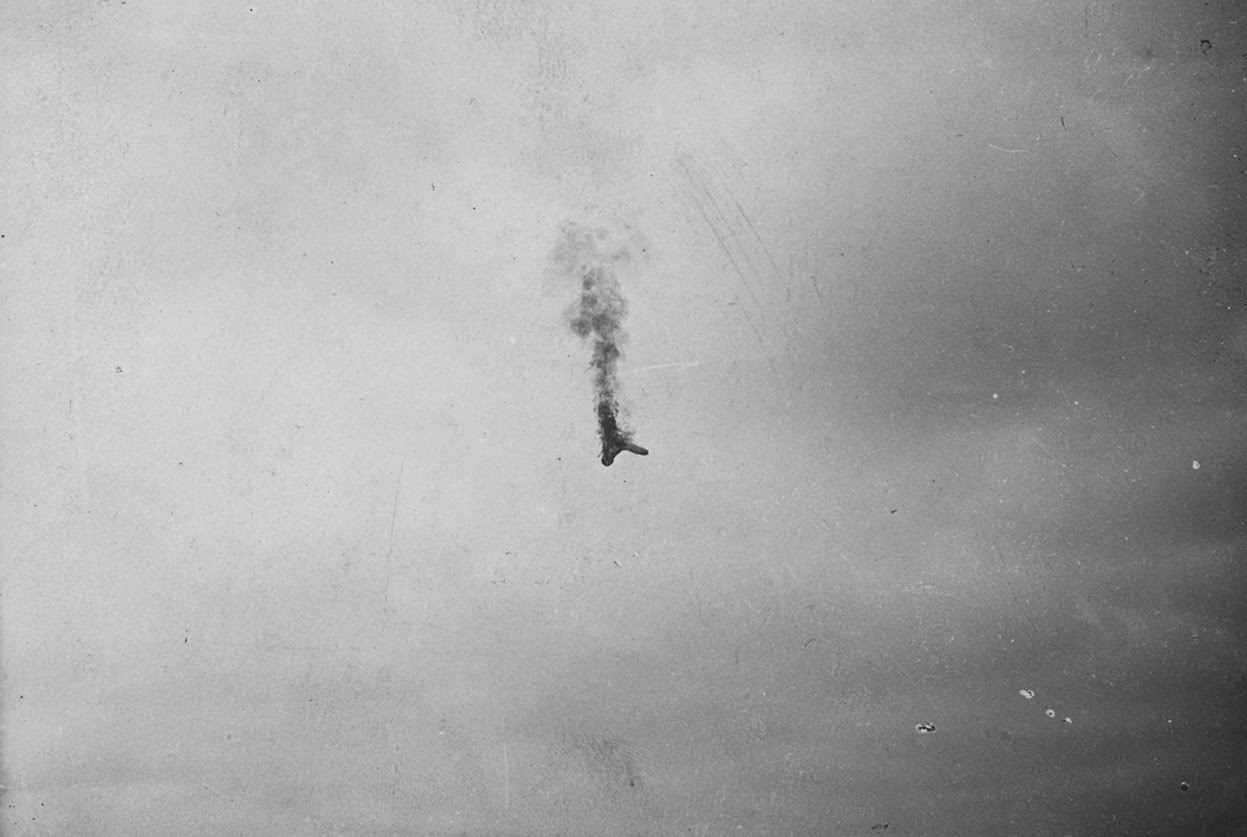 A survaillance craft? From the looks of it, it had passed over Panther Burn. Was the pilot alive? Was his film salvagable?

Scenario: Starting with only 7 infantry, 1 HMG, some rough riders, and a commander (Tritchel), attempt to reclaim lost equipment that is more or less evenly scattered over the terrain. Infantry units may reclaim this equipment, essentially becoming its crew (one element of infantry becomes 1 element of the reclaimed unit). Further there are two ammo depots, along a central line of the board, one representing fuel, and one ammunition. At least one unit must touch this in order for for tanks to be able to move, or guns of any kind to shoot. (Revised for future games: each salvaged unit must either touch both of these before it can respectively move or shoot. Scenario was a bit too easy.)  After reclaiming the units, the Americans must exit off their board.

Martians deploy 2 scouts and an assault tripod, all in reserves. On each round, roll for a single scout (6+) to wander by, then randomly roll for a table edge to enter on (including the American side). After the first scout has fired, you may start rolling for the other two remaining tripods in the same way.

Victory Conditions: None, really. For the following scenario (Crash Landing) the American player will refresh only his infantry, and may only deploy whatever gets off the table before the end of this scenario. However, the Americans win a Heroic Victory if they break the Martians, and the Martians win a Heroic Victory if they let fewer than 5 total units get off the board.