No Spanish scene is complete without some tile-roofed buildings! These were my most ambitious scratch-building project yet.  I made them both with foam board, and to be honest, I suck at precise measurements so I just did my best cutting with an x-acto knife. Same with the windows - I more or less eye-balled them. Call me lazy, but it worked ok.

The stairs were probably the trickiest part and something of an afterthought. They're made by simple taking some rectangular scraps (and cutting more) and stacking them and glueing them. Not actually very hard, but it elevated the overall illusion far beyond the effort I put into it. 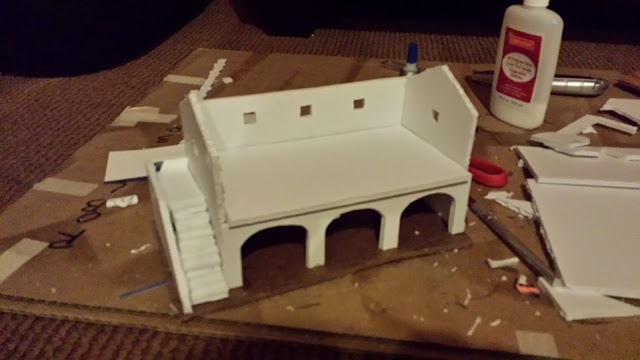 The roof was a bit more time-consuming.  I had some very heavy duty cardboard laying around from a piece of artwork that was shipped to me, and it was sturdy enough to pull off the top layer of paper leaving the corrugated part intact. I was far less successful with more run of the mill cardboard boxes. It still took a lot of trimming with a knife, but in the end it worked well. The scale is not exactly right (would probably be better for 28mm), but you probably didn't notice until I pointed it out, did you? 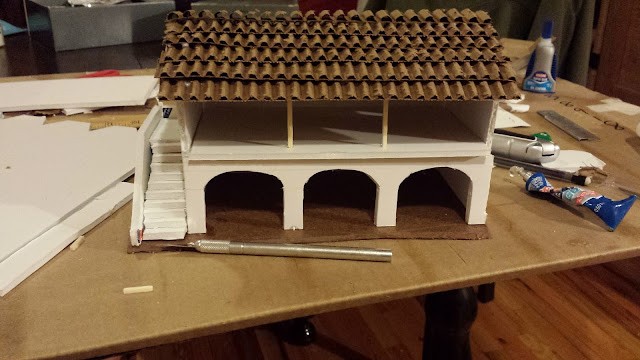 Then I used spackle to cover all of the exposed foam edges so that the primer didn't eat them away, and filled the many many gaps which my imprecise measurement left, especially in the ad hoc stairs. Thankfully the building is going to be covered in "stucco" so those rough edges will blend in without a problem. 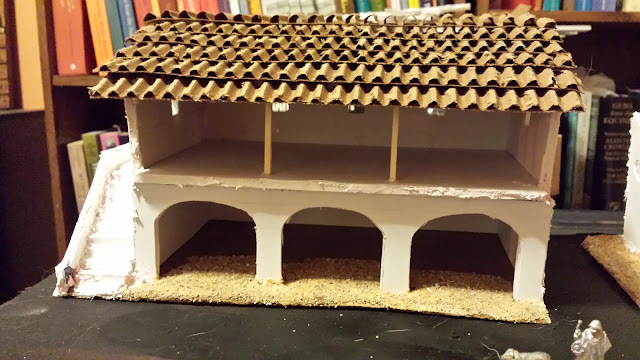 I also added some details, gently cutting into the outer paper layer of the foam board and then incising "brick" into the foam. I was surprised by how easy it was to carve. I also used this to make doors.  With the house below, I also added an abbreviated second floor that could be accessed with a removable roof. 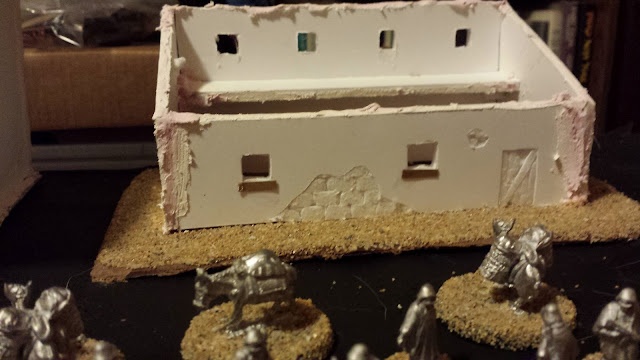 Sand glued to the base and toothpicks added as "supports" in the front of the barn. I also used a glue gun to affix more toothpicks to the removeable roof to keep it on. 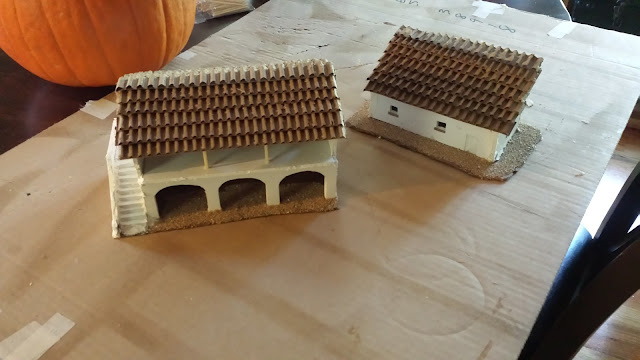 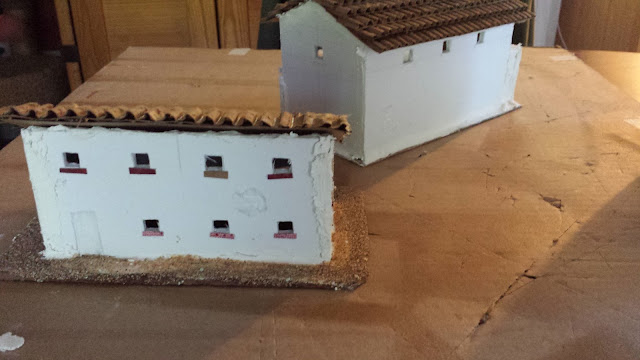 I was planning to just use the spackle to create a textured "stucco" effect on the buildings, but I ended up finding a container of Martha Stuart Stucco Effect stuff on clearance for next to nothing. After testing it, I decided that it would create a more subtle effect than the spackle. 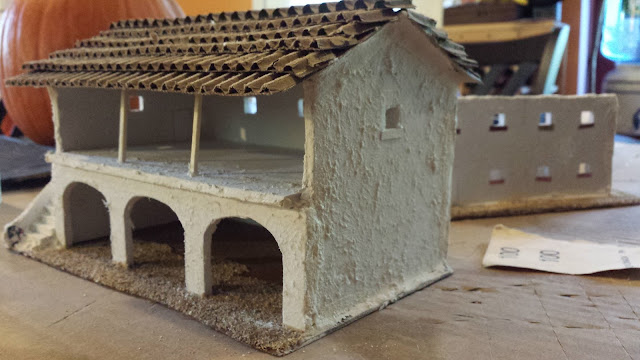 Primed in black (lightly on the areas of exposed brick - but I wanted some of it to be eaten by the primer), and then I begin the base coat. I'm using an Americana brand craft paint in Honey Gold for the buildings (about $1), and Craft Smart Brick Red for the base coat on the roof. 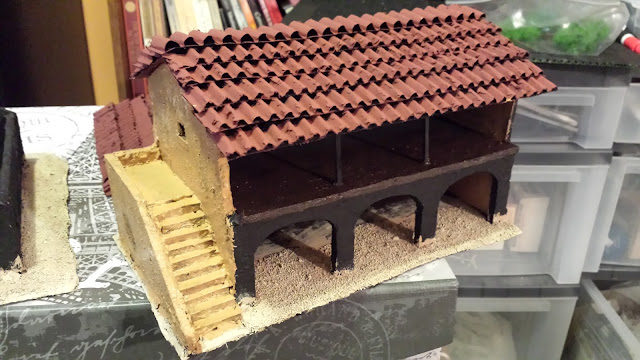 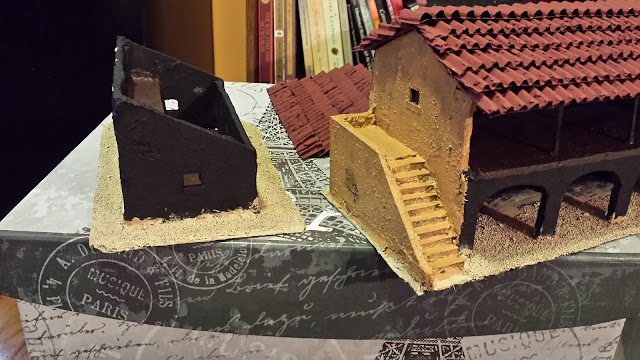 The second floor of the barn is painted a dark brown of some kind.  The whole thing then got a heavy wash of Vallejo Sepia Wash (thanks to Paul Scrivens for the excellent suggestion on his blog). 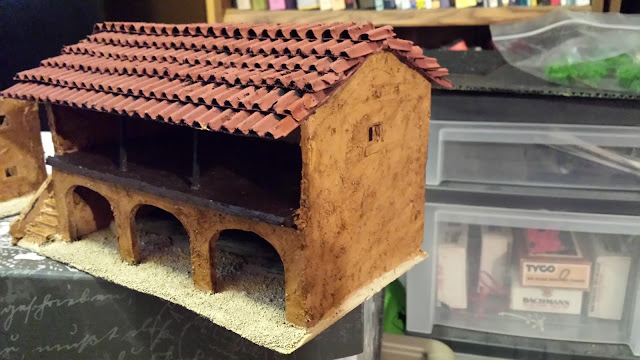 I drybrushed the brown floors with Vallejo tan earth, and then started on the layers of dry brushing for the house itself.  Craft Smart Fawn, then Desert Sand, and then very lightly drybrushed with Vallejo Pale Sand and an even lighter layer (just a few details really) of Folk Art Wicker White. 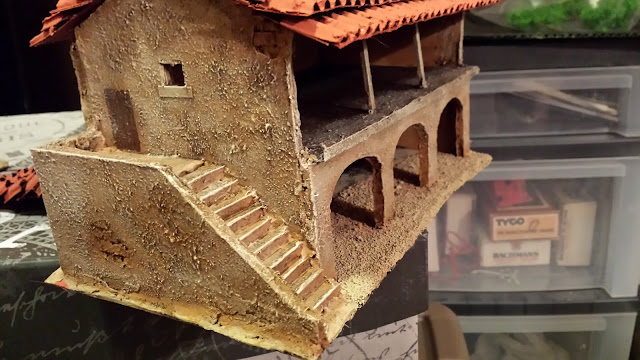 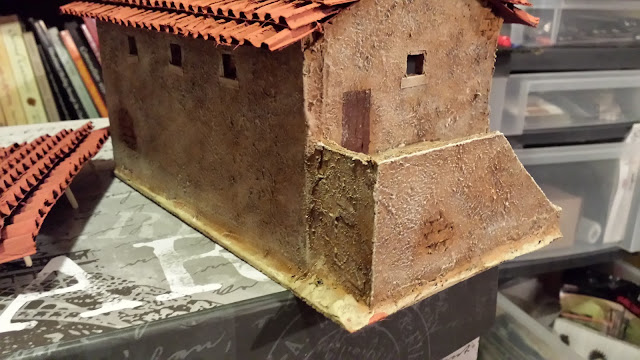 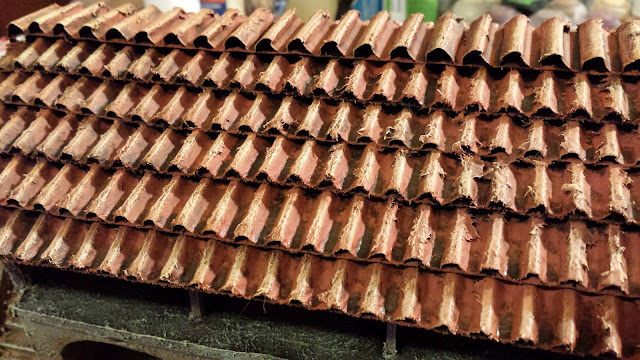 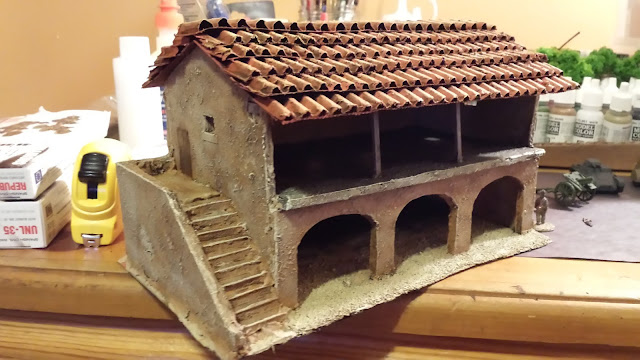 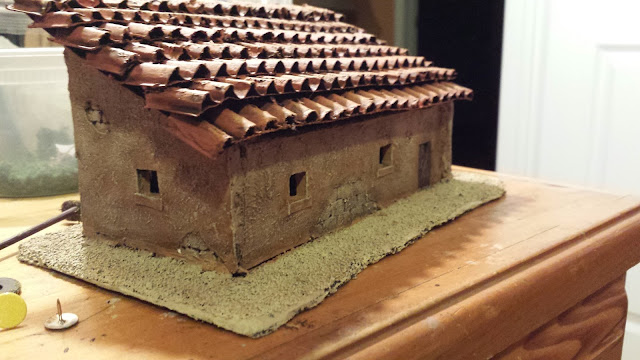 And on the table: 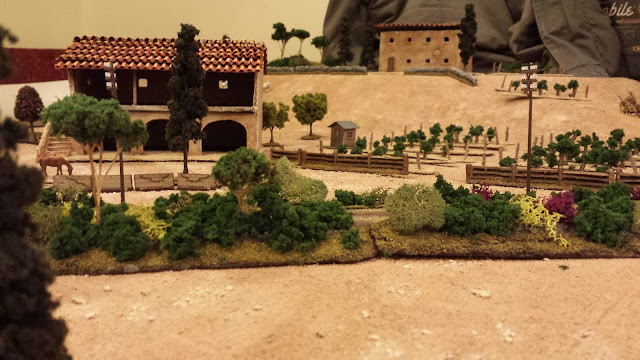