After a solid defeat in the trenches, the Nationalists requetes fall back and try to cover the withdrawal of their smaller artillery pieces. The largest, already useless due to the close range, are abandoned outright. The Lincoln Battalion meanwhile keeps up the pursuit under the heat of the noonday sun.  After capturing the cemetery, they cautiously look at the largely open ground on the other side of the cemetery's eastern wall... 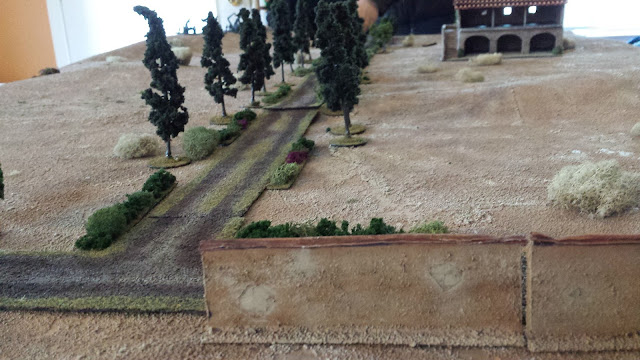 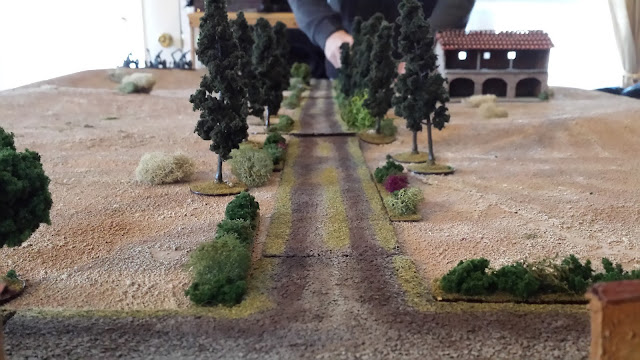 The nationalist artillery (some AQMF figures), there just for show. 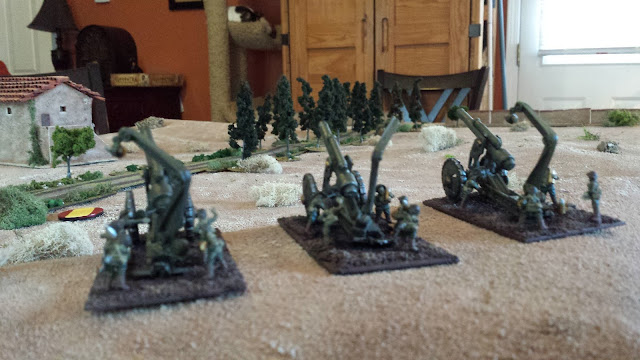 The delaying action scenario is rough on the attacker, and I was locked down solidly on my own half of the board. 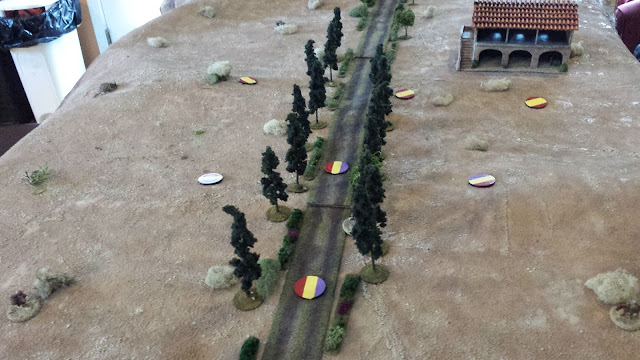 Jump off donkeys are more less in a line. 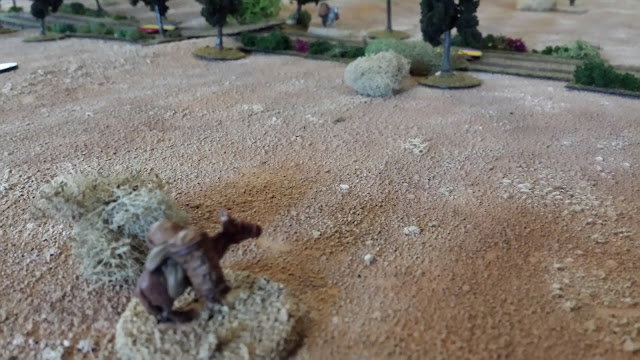 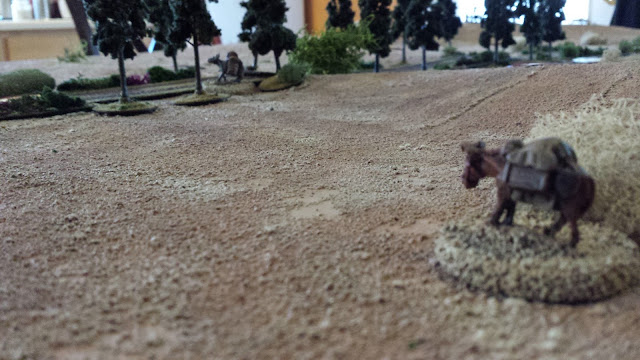 My opponent makes a mistake. knowing I selected a tank for support (and a MMG), he placed a roadblock down the road. As it turned out it was just 6" from one of my JoPs, meaning he more or less gave me hard cover! 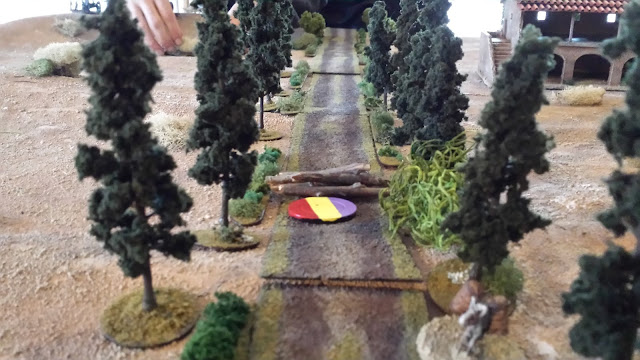 He also bought a hard cover entrenchment, placing it on his third JoP - this one is my objective. Normally static defenses can't be used in this scenario, but the campaign rules allow it. 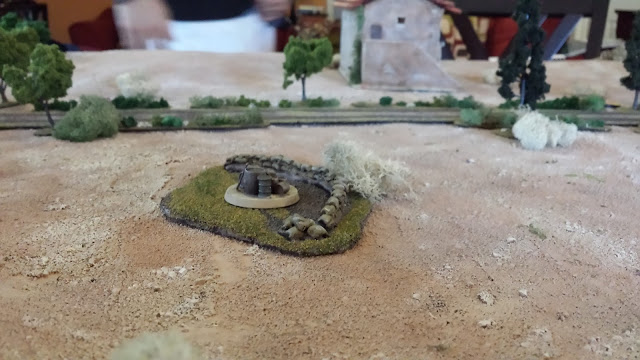 Another Nationalist JoP, very far back, near his table edge. 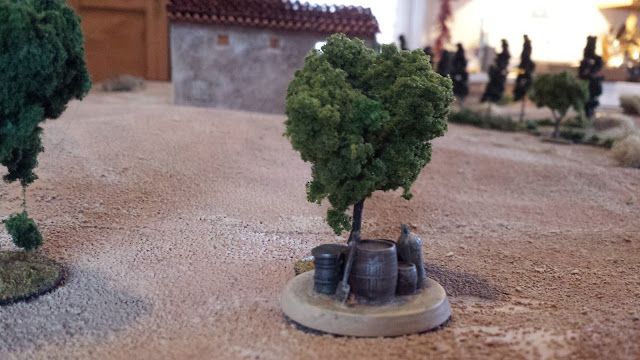 And the last on the barn's bottom floor. 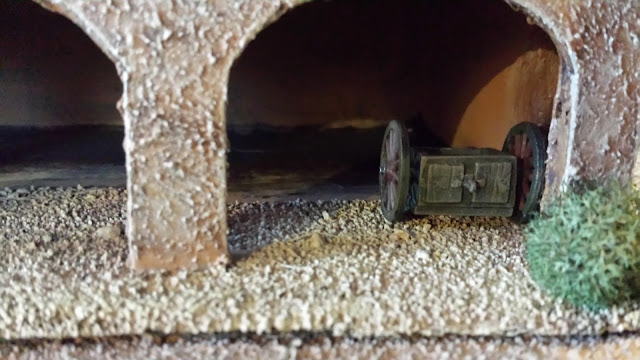 The game begins!  Lt. Monroe cautiously gives his T-26 the go-ahead to begin their approach. 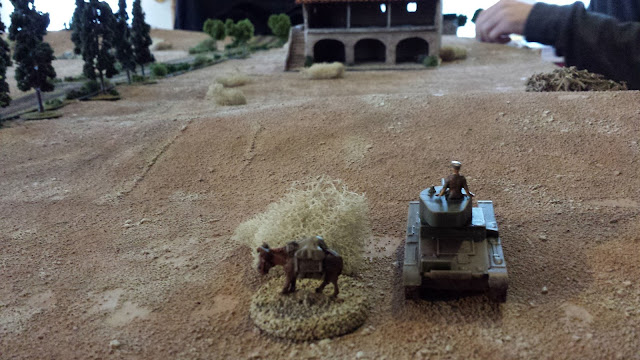 On the other side of the board, the Lincolns' two-man scout team deploys behind some bushes. 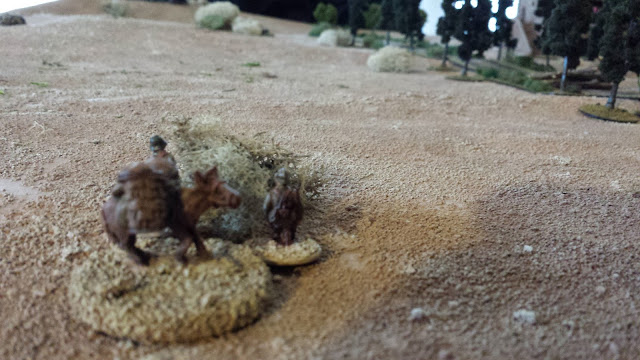 The scout team did its job - the enemy deploys their MMG in their entrenchment, and proceeds to gun down the scout team. 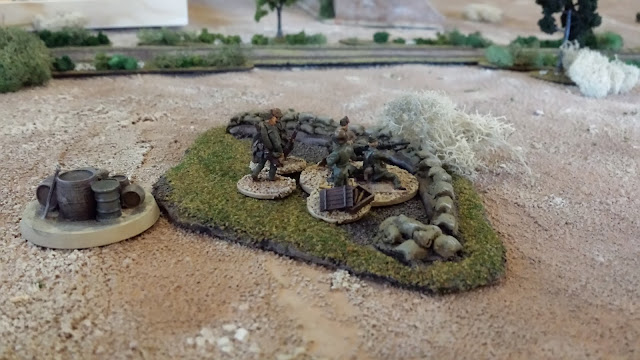 I started with 10 morale, and the loss of this team dropped me down to an 8. 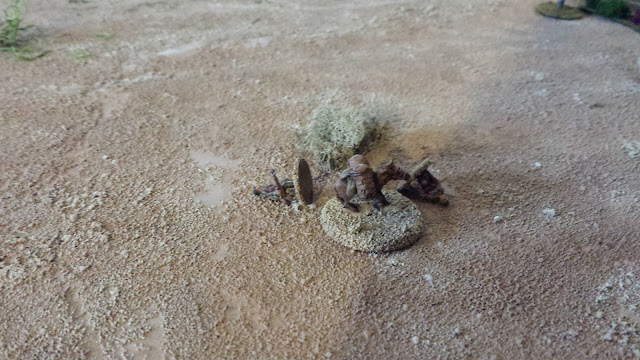 The Nationalists deploy their weakened section (the other is at full strength) near the rear jump off point and then try to carefully move up, keeping the barn between themselves and the tank. 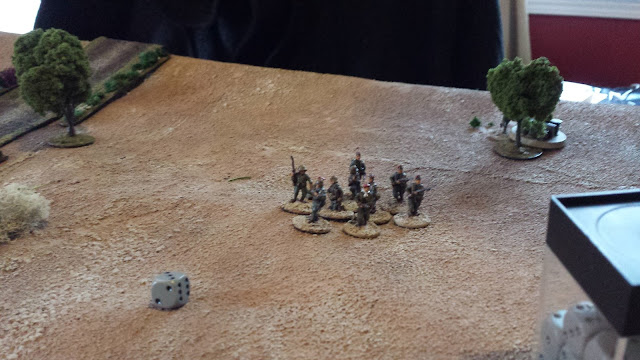 But the Lincolns deploy their machine gun behind the road block and catch them in the open! 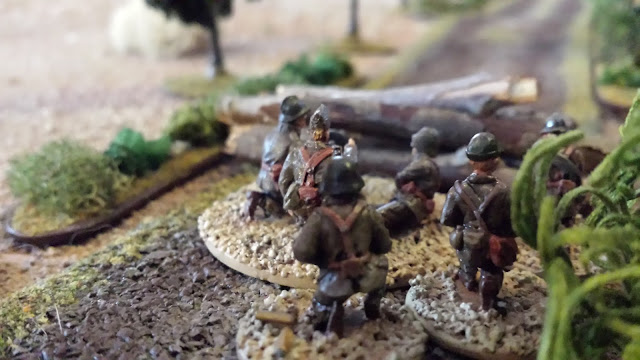 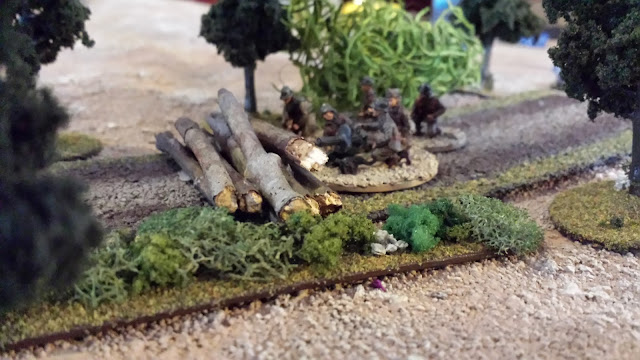 A section of infantry cautiously moves up behind the machine gun, preparing to add its fire. 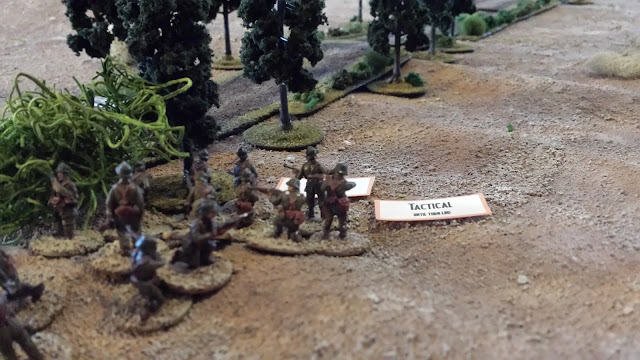 Meanwhile the tank suddenly roars to life and drives flat out, contesting the JoP in the barn. 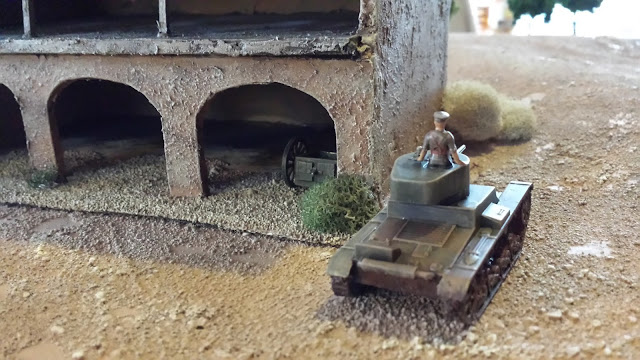 A series of poor movement rolls sees the Nationalist section taking serious casualties as they try to round the barn. With the platoon sergeant with them (senior leader), they've decided to go tank hunting with their grenades. 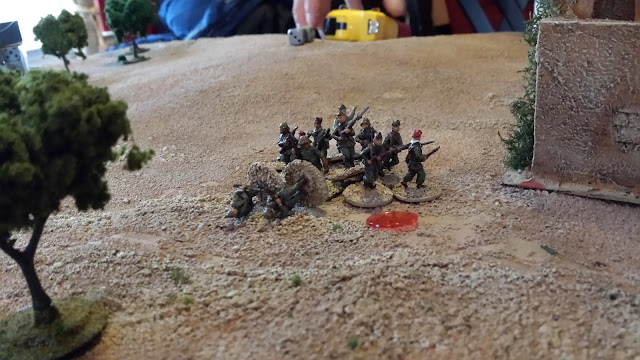 One of the two teams is pinned before they make it. 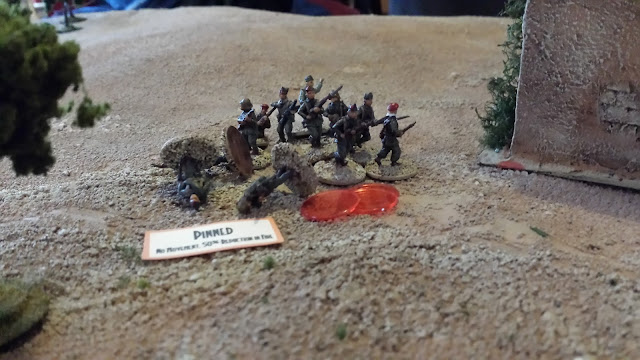 With a triple phase (!) the other team, along with the junior and senior leader, abandon the pinned team to its fate and move as close as possible to tank before tossing their grenades.  A lucky hit sees a grenade go off against the viewport, killing the driver and delivering 2 shock to the unit. One more shock and the crew will bail out. 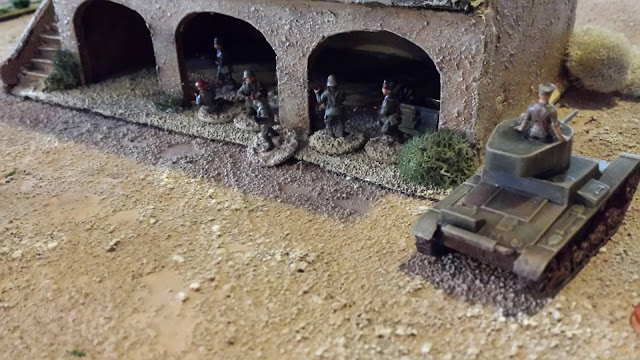 But the tank's gun still works and it rotates its turret, firing at point blank range. 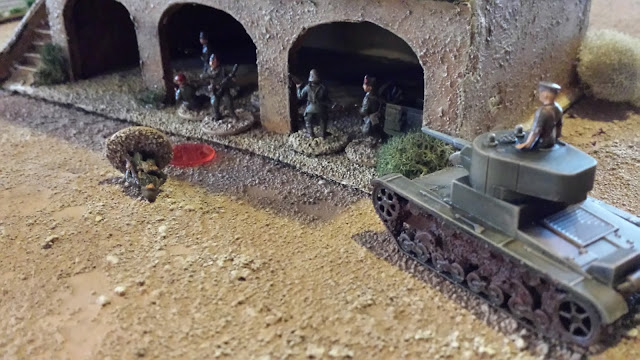 The second Lincoln section appears across from the team in the barn and adds their fire. The Nationalists' senior leader is knocked unconscious! 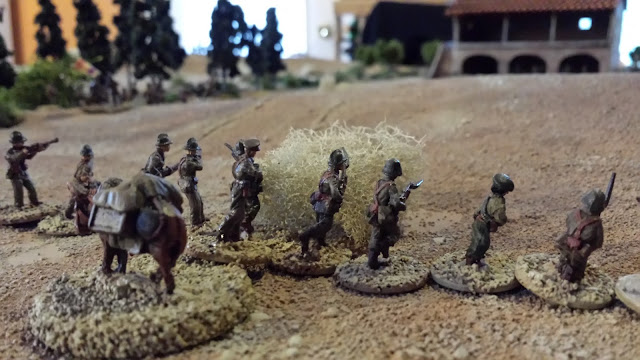 Both sections and the machine gun concentrate their fire on the barn, multiplying the shock, and eventually pin the team inside the barn. 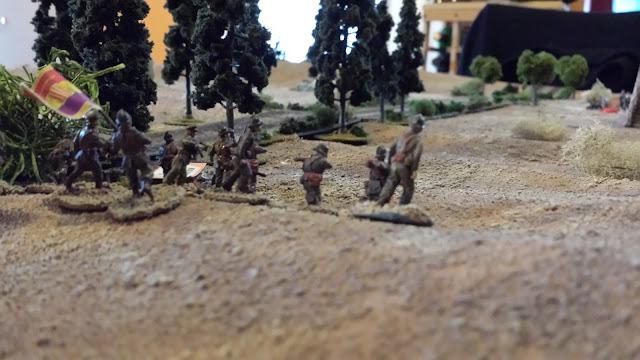 With one whole section now pinned and having taken significant casualties, Jamie decides to pull out.  Rolling for all of the pinned men sees several captured by the Lincoln Battalion (which treats them quite fairly), and their wounded senior leader is dispersed, so his platoon will have to do without him next game. He will return the next morning. 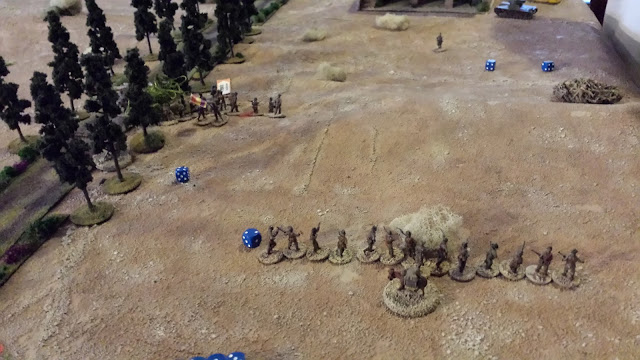 A short game, but a surprisingly challenging scenario. That open ground made the approach difficult.