Quinto Redo #3 - At the Edge of Town (Lincolns)

The lead platoon of the Lincoln Battalion, under the leadership of Lt. Al Monroe of Chicago, reached the edge of Quinto as the sun began its descent into the west. With the sun behind them the Lincolns advanced cautiously towards the first buildings of the town. 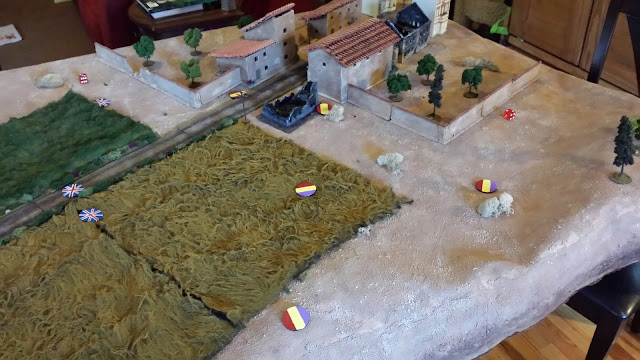 I was pretty happy with where my jump-off points ended up. All relatively close to the town, they would allow a rapid approach from three different positions. 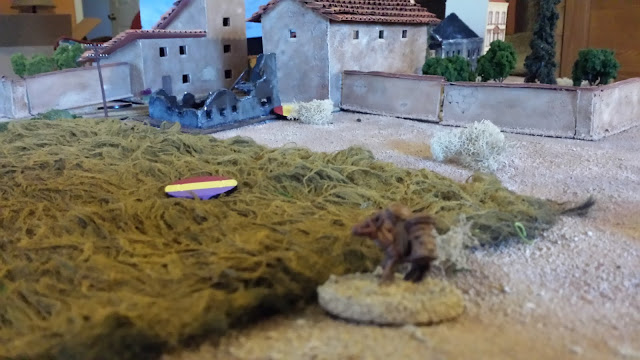 The third was particularly good. It allowed me to cover the ruined section of wall on the north side of the board. 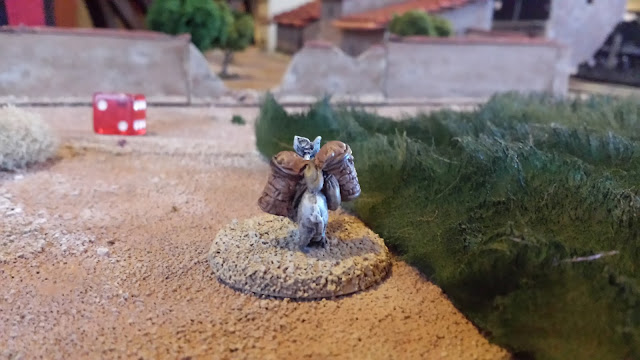 The enemy, despite having lost 1/3 of their platoon in the previous two battles, placed their JoPs around the town. 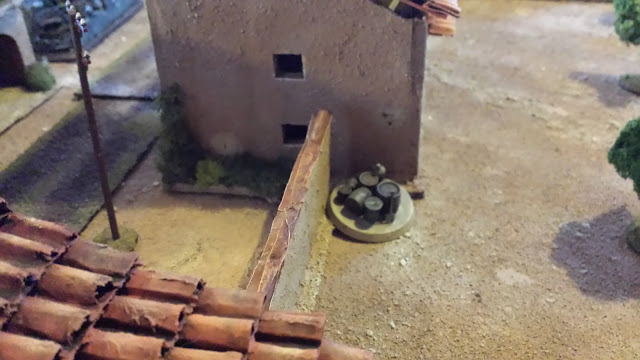 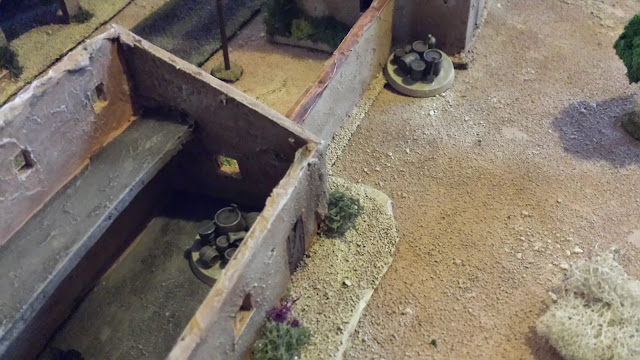 The first of the Republicans reveal themselves in the western fields. A machine gun team detached from the Tom Mooney Company sets up their gun and trains it on the gap in the wall. 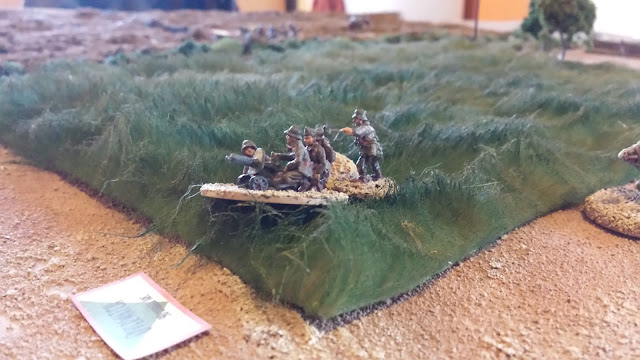 A Pulitov field gun takes position in the central fields as well. 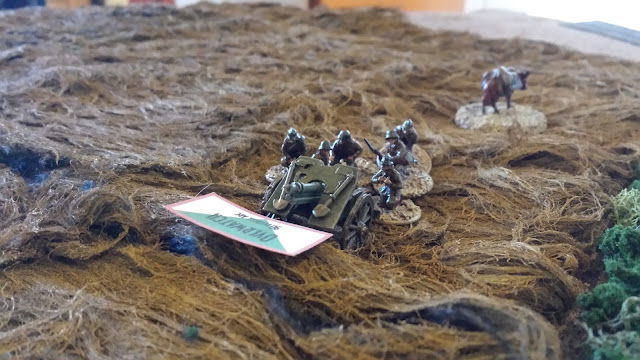 The requetes deploy their own gun opposite the Lincolns. A firefight immediately ensues. 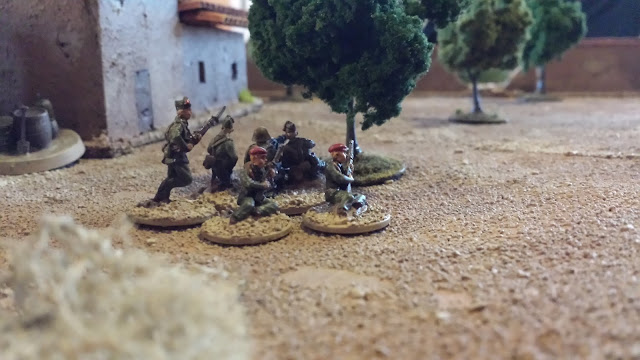 In one of those rare moments of gaming, the stars aligned and smiled upon me. Whenever possible, I like appropriate gaming music. After a brief exchange of fire, the Mooney gunners were about to open up on the Nationalists when "Viva la Quinta Brigada" came out over the speakers. Inspired, I shouted "Viva la Quinta Brigada!" and rolled my ten dice. It was an epic hit. No kills, but six shock. With the team having one shock from the last hit, it was immediately pinned. 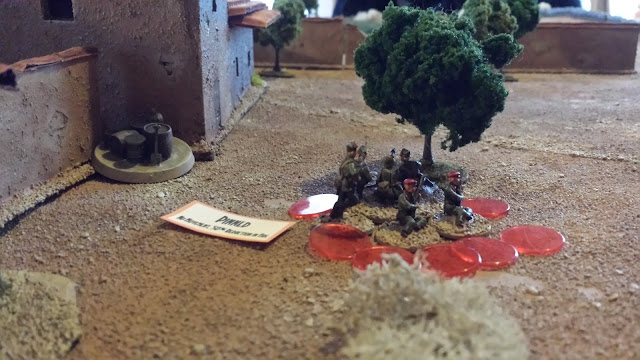 Unwilling to see his support go down so easily, the enemy leader deployed within command range along with a section of infantry. 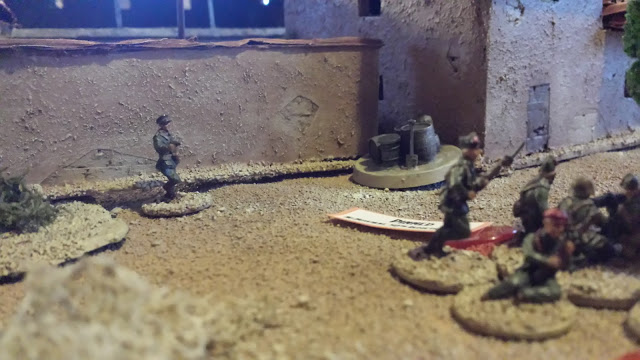 The infantry deployed carefully out of sight of the machine guns. 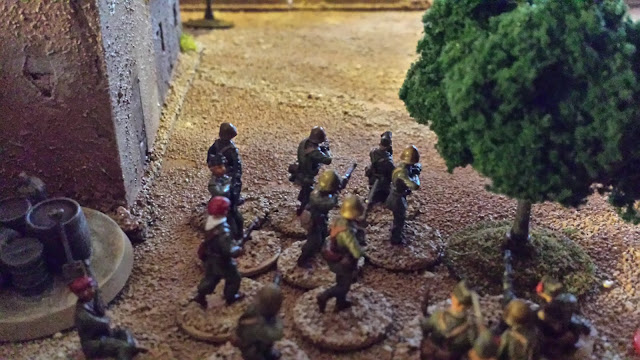 Cautiously they advanced up to the wall which shielded them from the Lincoln's bullets. 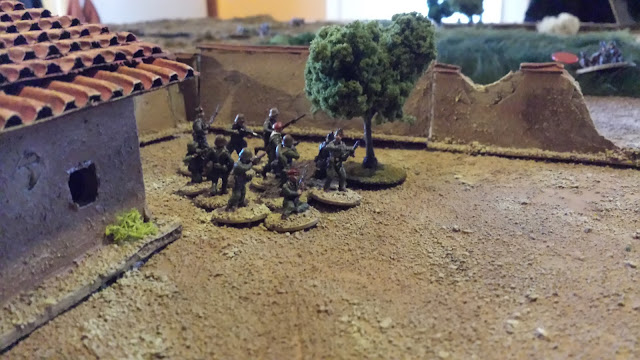 The Lincoln machine gun team took some fire too, losing a couple of men, and taking some shock. But they were clearly coming out better than the enemy gun. 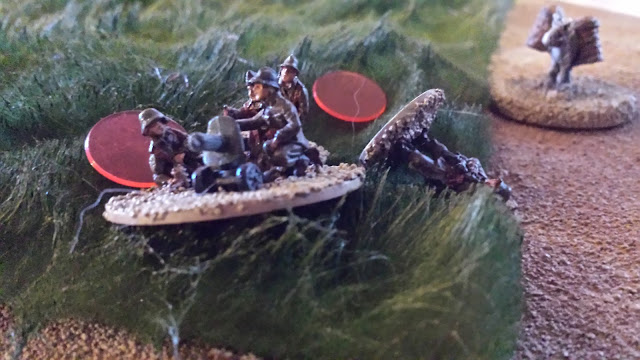 Lt. Monroe sent his own infantry forward to support the gun. I'd become concerned that the enemy might make a charge out of the gap. A desperate move, but the Catholic fanatics might well try to martyr themselves. 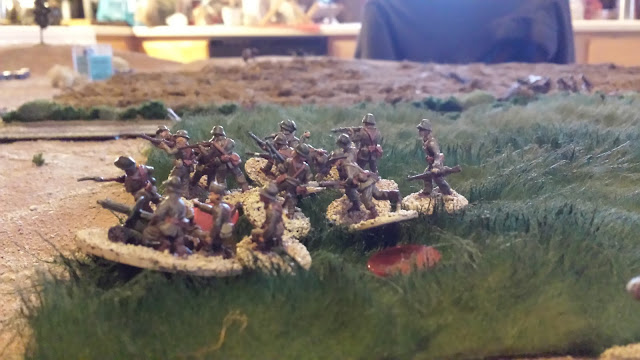 Indeed, they had pressed themselves against the wall next to the gap in preparation. 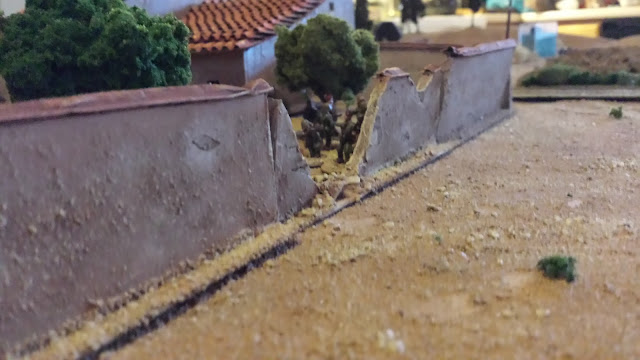 But the wall did not protect them from the field gun. It blew a hole int he wall, and threw some shock on the team behind it. 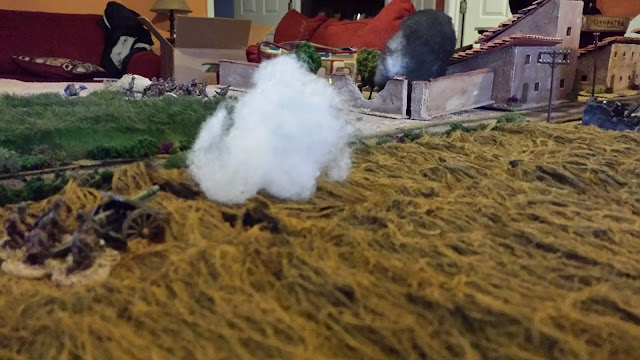 The infantry formed a line to fire through the new gap, before they too began to approach the wall. 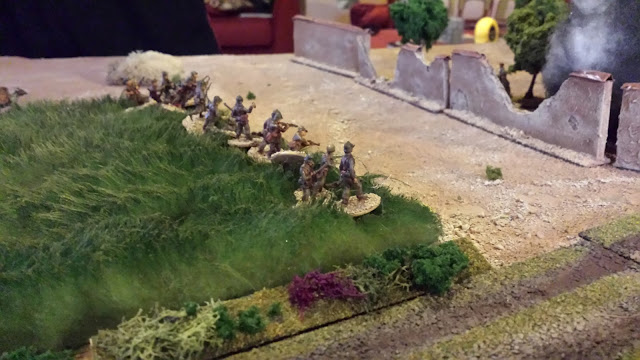 The enemy infantry fell back away from the now broken walls in some disorder. The section was weak to begin with, and was starting to fall apart. 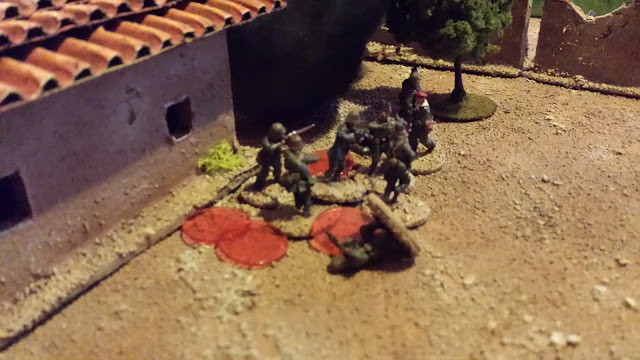 Another barrage with the field gun saw the rest of the wall knocked down, allowing the Lincoln infantry to fire at nearly point blank range. 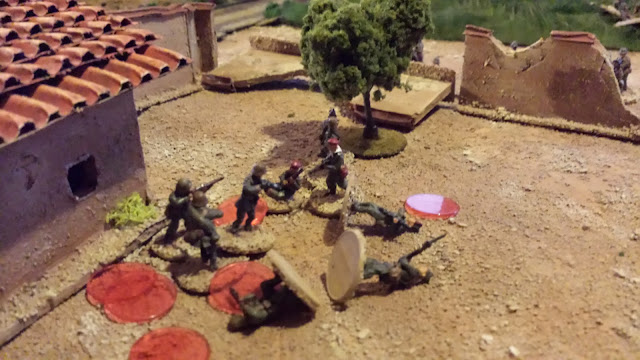 In desperation, the enemy leader brought up his second section at the same jump off point. This battle had concentrated itself entirely in the northern yard. 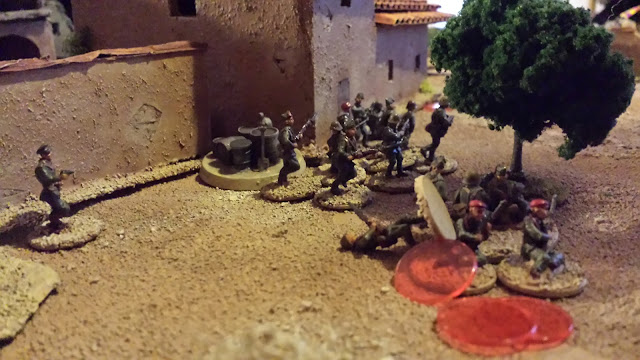 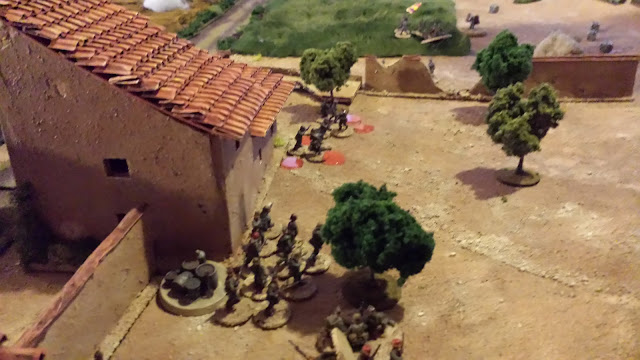 As things moved towards a dramatic conclusion, Lt. Monroe took the field himself to bolster the machine gun team that continued its long range duel with the enemy gun.  That team had eventually managed to become unpinned, and Monroe knew he couldn't even think about moving his men to the assault unless the gun was taken out first. 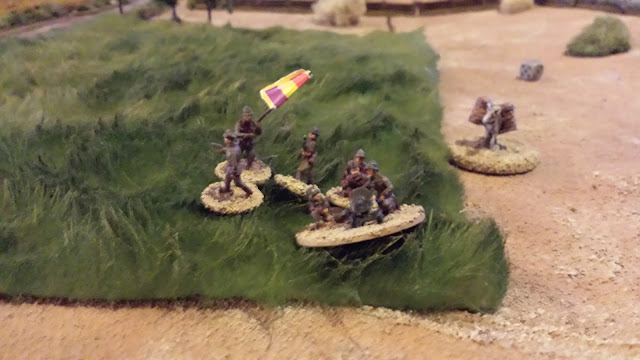 At the center, with the walls now down, the field gun had a direct shot at the nearly broken enemy section which had only a single tree for cover. For the field gun, it was the same as them being in the open. 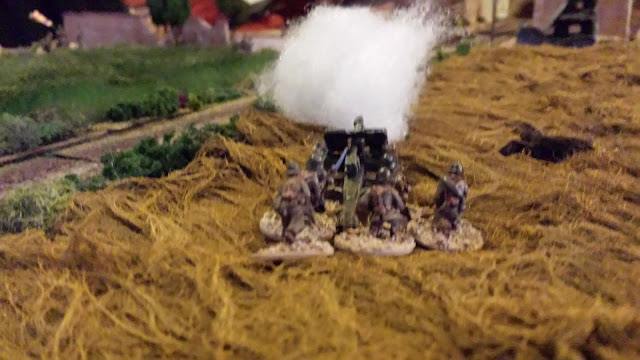 A direct hit saw the Nationalist junior leader killed and one of the teams broken.  The other, containing the LMG, was still mostly intact. 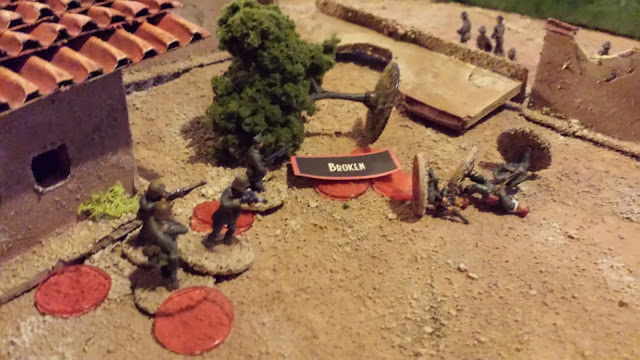 The Mooney gunners continued to do their work on the enemy MG. 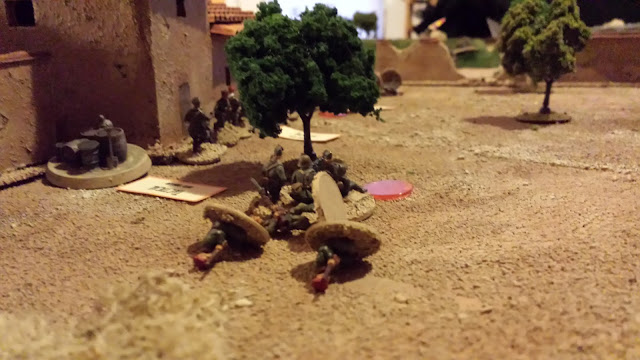 The lead Lincoln section, taking cover behind the ruins of the wall, pinned the enemy LMG team, firing at nearly point blank range.  Their second section, rushing up to help their brothers, positioned themselves in preparation for an assault against the Lincolns, joined by their platoon commander. 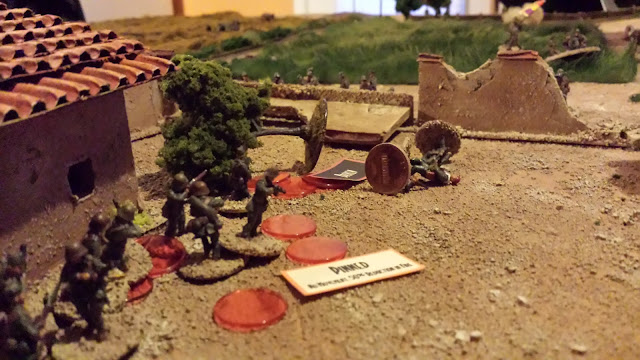 Rushing towards the firing rifles, the Nationalists braved a wall of lead. There was never much of a chance of their success, but the dice were not on their side. The section was wiped out, the platoon leader unconscious, and the junior leader taking a wound. 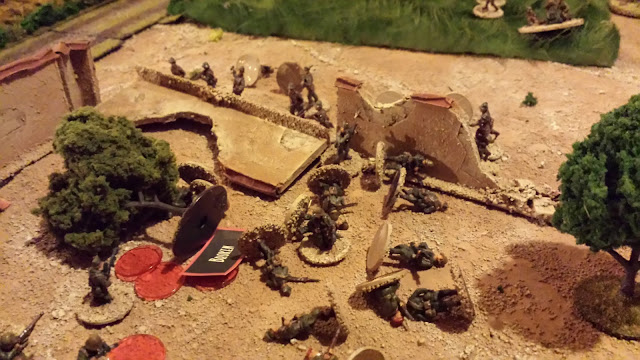 The junior leader pulled his unconscious superior officer back to safety, but the battle was lost and so was the platoon. A brutal battle for the Nationalists, with 19 casualties to the Lincoln's 5. 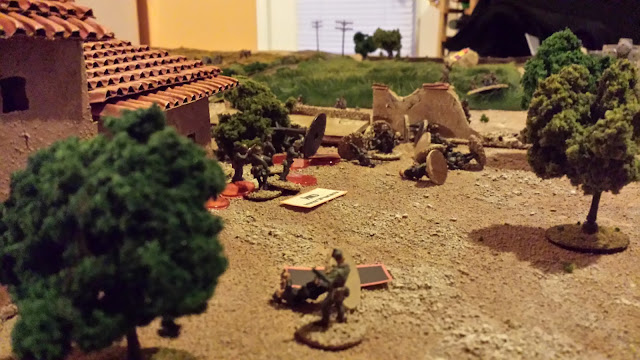 As the sun set on the town of Quinto, the end of the first day of battle saw the Lincolns in possession of the edge of the town, positioning them to press into the town the next morning for what looked to be some hard fighting. During the night, Lt. Monroe asked his C.O. for replacements for his platoon. Considering Monroe's proven effectiveness in taking the Quinto's outer defenses (+3 relation to the C.O.), he was given everything he asked for.

Going into game 4 and board 4, the Nationalists have brought up their second platoon, these being army regulars. The Lincolns are still on their first, which is also now at full strength. Moreover, with both the C.O. and the men having a +3 relation to the platoon leader, the Lincolns will have a +1 to force morale and to support the next game. As the Lincoln Battalion's momentum grows, the Nationalists have to wonder if there's any chance of stopping them. In terms of the campaign, they will have to fiercely defend the next two boards and deliver a total of 4 defeats to the attackers in order to still hold the church at the end of day 3. It will be an uphill battle for the defenders, but the terrain will strongly favor them for the rest of the campaign.
Posted by Unknown at 12:25 PM