After successfully scanning the destroyed mechs on Calish III, the 1st Argyle Rangers picked up a nearby distress call. One of the mercenary pilots had survived!  With his company utterly destroyed, recovering the pilot would not only provide valuable intelligence on what happened on the planet, but potentially an experienced mech pilot would be a useful addition to any force. 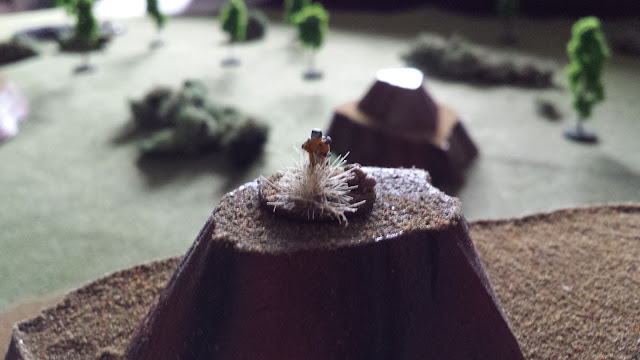 The downed pilot had climbed to the highest ground in the area in hopes of boosting his signal.  Of course, this meant that the Dogs of War were also likely to pick up his distress call eventually. Working fast, Captain Laval ordered his Cavalry Company to send a detachment, with mech and air support, to recover the pilot before the Dogs could.

"And if you can, give those Dogs a punch in the nose for me as well, would you?" he said.

- Objectives: rescue the pilot (50pts & the pilot) and destroy or cripple half of the enemy's force (200pts).

After the thunderstorm during the initial encounter, the ground had gone completely to mud, slowing down any non-hover ground vehicles. 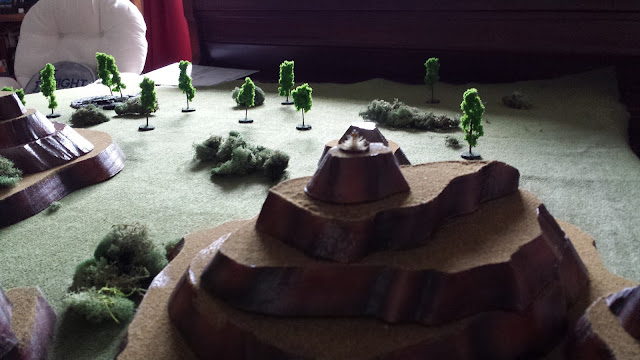 As expected, the Dogs of War were already on their way, fielding a primarily light force, anchored by a Cyclops assault mech. 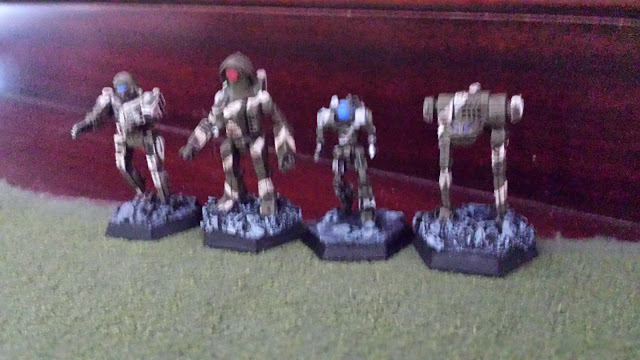 The Rangers, meanwhile, put forward a nimble force of two fast Saladin hovercraft and two Warrior helicopters for the rescue, and Catapult and Zeus mechs in case the Dogs were feeling frisky.  A single Mechbuster fighter was present as air support, unopposed by enemy air. 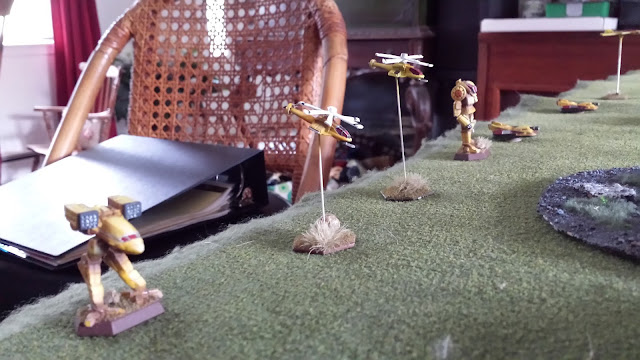 The VTOLs rushed forward at maximum speed as soon as the enemy mechs appeared on the scanners. 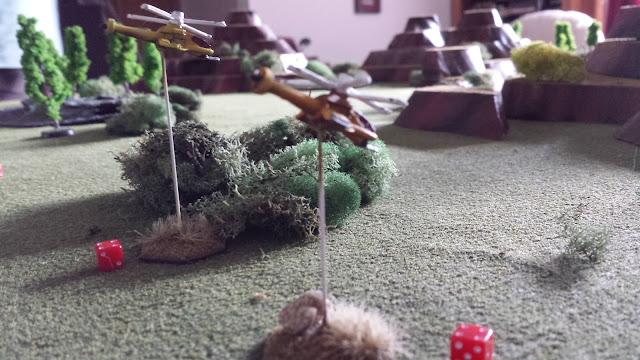 It was a race, but as fast as the Jenner and Ostscout are, the helicopters were faster, especially as the muddy ground slowed even the light mechs. 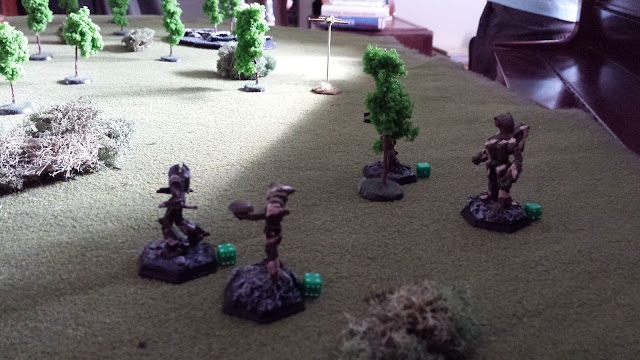 The mechbuster made a series of lackluster passes, unwilling to get too close to the enemy initially.  As the light mechs moved away from the heavies (and their LRMs), he'd make an attack run. 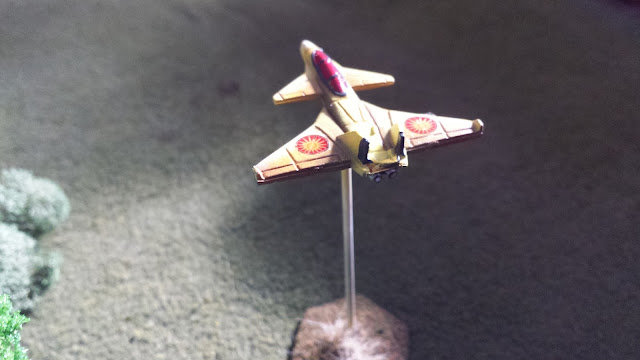 The helicopter reached the top of the hill just as the enemy mechs reached its foot. The Mechbuster made a pass at the Ostscout, but the fast moving mech eluded the pilot. The lead helicopter, however, packing both short and long-range missiles, unloaded on the light mech, nearly destroying a leg and and arm. 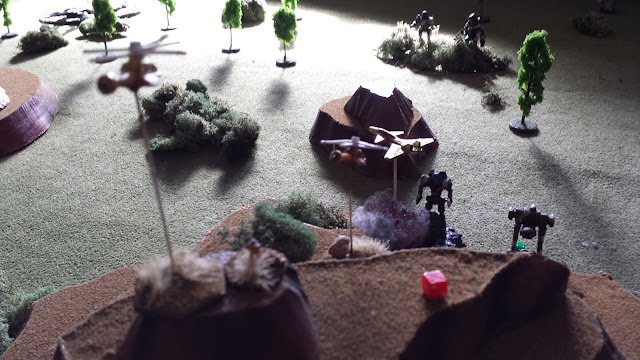 Meanwhile, the Saladin hovercraft rushed forward, parking behind a hill to hide from the enemy heavy mechs.  They were now behind the enemy light mechs, ready to harass them if they tried to escape. 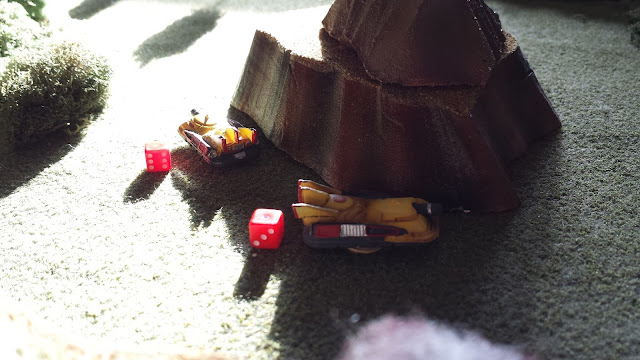 The heavy Dogs support took up positions in a copse of trees, but the Rangers avoided giving them anything to shoot with. With the pilot picked up by the Rangers' helicopter, the recall order was given by the Dogs commander, and the lights began to withdraw under the protection of the Cyclops and Trebuchet. 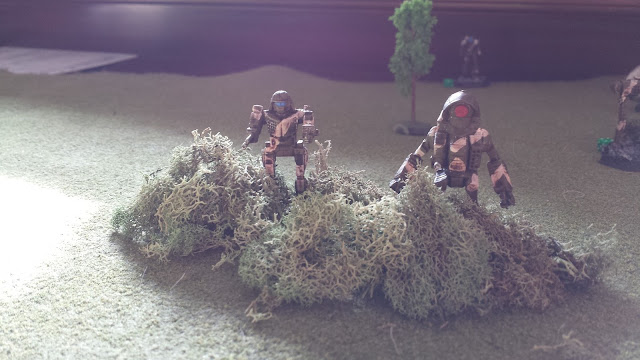 The Ostscout, heavily damaged, was looking to withdraw before he could be taken out, but the Jenner remained bold and undamaged. 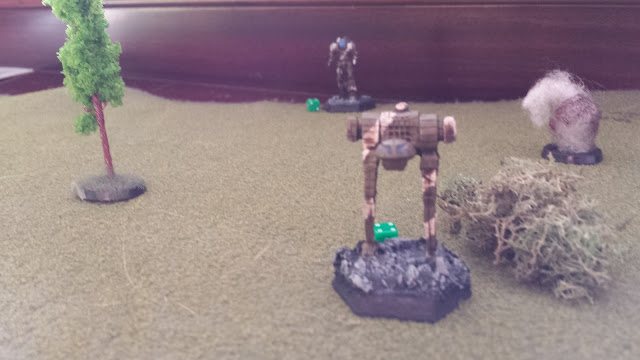 And then something unimaginable happened. Smelling blood, the lead helicopter began to actually chase the retreating mechs. 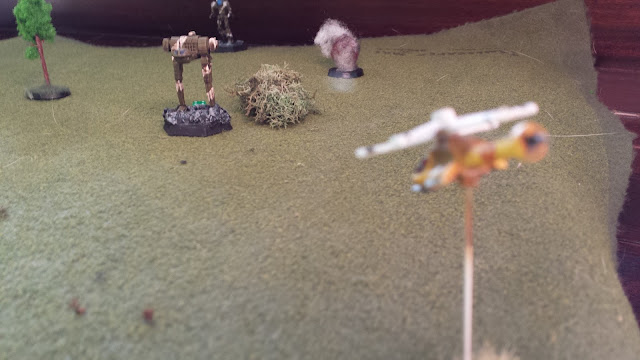 Hoping for easy prey, the Warrior went after the Ostscout. Having reached just the edge of the table, he'd be gone next turn.  Sadly, the quick little mech proved elusive, slipping away the next turn. 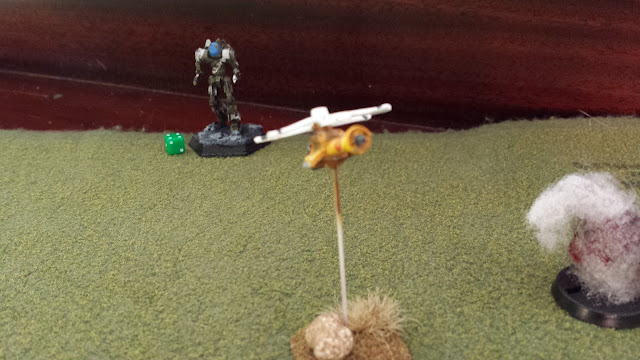 The other helicopter, meanwhile, was able to get clear, with the rescued pilot safe inside. All that remained was to try to give the enemy that bloody nose Captain Laval wanted. 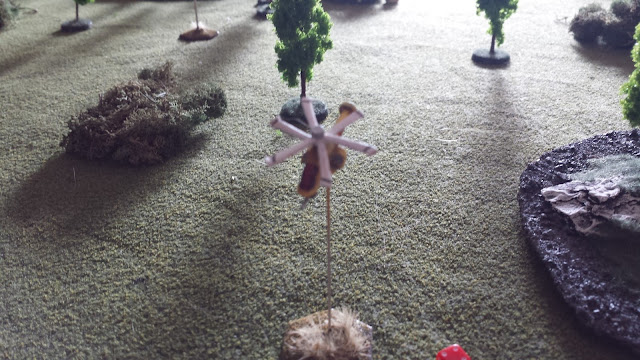 The air assets moved in for the kill.  Hoping to damage the Cyclops before their mechs got into range to slug it out, the Warrior and Mechbuster attacked it from both sides, the VTOL moving to unload its missiles into the mech's rear armor. The Ostscout safely away, the Jenner turned to support. 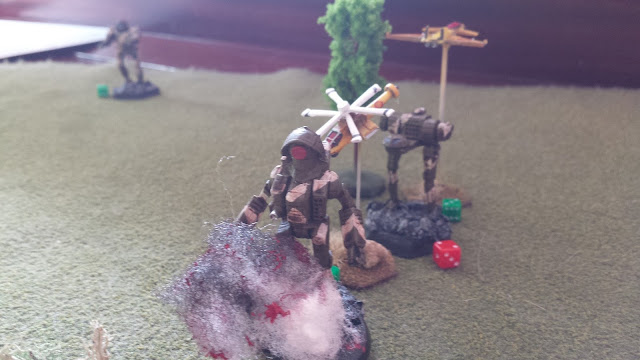 And in one of those "only in Battletech" moments, the Mechbuster landed a shot on the Cyclops with its Autocannon 20, and rolling a head shot on the damage location!  The otherwise undamaged mech had its head blown clean off by the attack, slaying the pilot and sending it falling to the ground in a single shot! 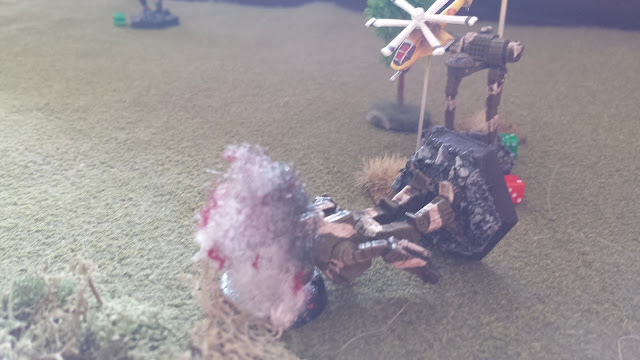 With the Ostscout withdrawn and the Cyclops command mech down, the Lance Commander dead, the retreat was sounded.  With the Rangers' mech forces still well out of range, the hover craft and helicopters moved in to harass the Jenner, now the last enemy in the field (the Trebuchet ran as well). 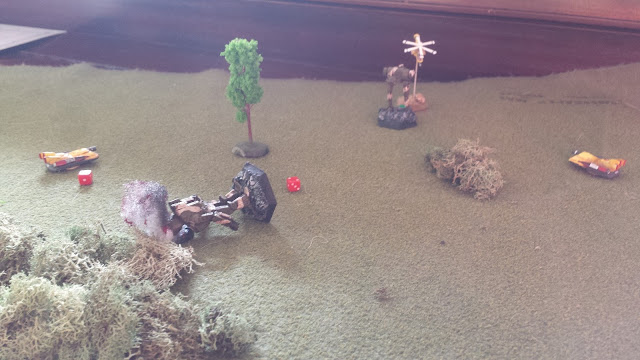 While taking damage from the Warrior, both Saladins missed, allowing the Jenner to slip away. 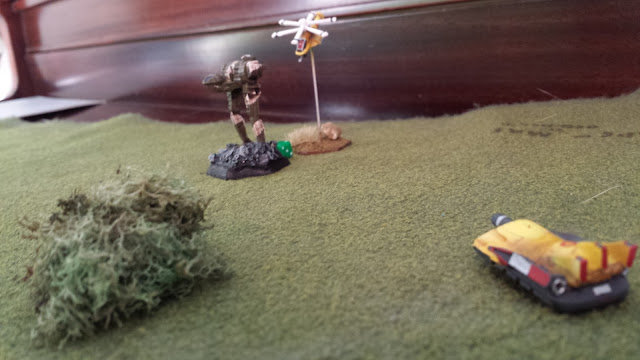 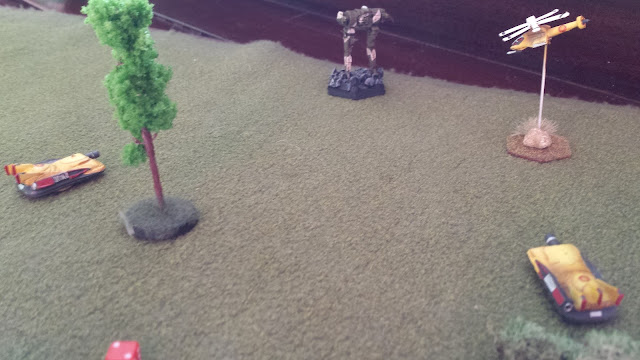 While unable to destroy half the enemy force, the rangers managed to damage two mechs and capture the decapitated but otherwise undamaged Cyclops, a valuable assault mech, and of course the downed (3/3) pilot. A solid victory for the rangers, and an expensive loss for the Dogs of War mercenary company. 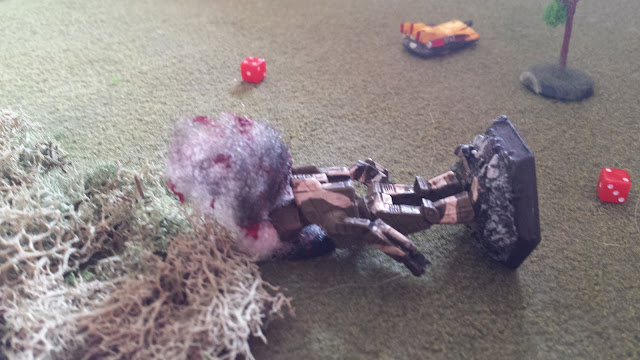 With the battle over, both sides returned to their landing zones.  At nearly that very moment, scanners indicated a potential problem.  Forces from the Outworld Alliance militia had just entered the system and would arrive on world within a few hours. With a fair amount of salvage from the mech company lying around, both sides moved to secure the site for salvage. After twice dancing around the Dogs of War with his cavalry, Captain Laval knew that the time had come to strike a serious blow to his long-time enemy as both sides moved to secure a landing site for their dropships. 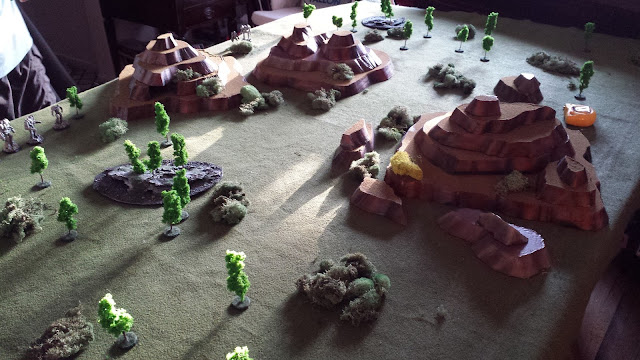