I've definitely got the Battletech bug. Fresh on the heels of the Oberon Conference, we're into a new 3-game mini campaign that will kick off a much longer term "chaos campaign" style run. Here we go!

It's been a year since the Oberon Conference. The 1st Argyle Rangers have returned to the Crucis March and the Dogs of War have secured a long term contract with the Draconis Combine. After months of travel, both units have once again been deployed to the Periphery, this time at the edge of the Outworlds Alliance, about as far from the Oberon Confederation as you can get and still expect to run into human beings. The Outworlds Alliance, bordering both the Federated Suns and the Draconis Combine, is slowly falling apart under its own weight. While strong militarily, the cost of deterring both the Federations Suns and the Draconis Combine is born at the expense of basic necessities on many worlds. As the Succession Wars go on, education has all but collapsed in the Alliance, and most worlds remain isolated from each other with trade limited to necessities and luxuries viewed with distrust and distain. The Alliance itself, and the ruling Avellar family, are to many a distant and distrusted force which takes too much of their livelihood in exchange for protection from raiders and pirates. With front lines between houses Davion and Kurita subsiding into a state of tense quiet, both houses have begun to cautiously maneuver the crisis in the Outworlds Alliance for their own benefit...

The 1st Argyle Rangers are attached to the Federated Suns warship Churchill, officially patrolling the Crucis outback and periphery border. Unofficially the Churchill is staying very close to the Outworlds border, gathering information and allowing the Rangers to act as a rapid reaction force.

The Dogs of War meanwhile, have slipped into the Alliance, ostensibly looking for contracts. What even most of the rank and file in the mercenary company don't know is that they are already on retainer with House Kurita, looking for an opportunity to advance the Houses agenda on the Periphery. 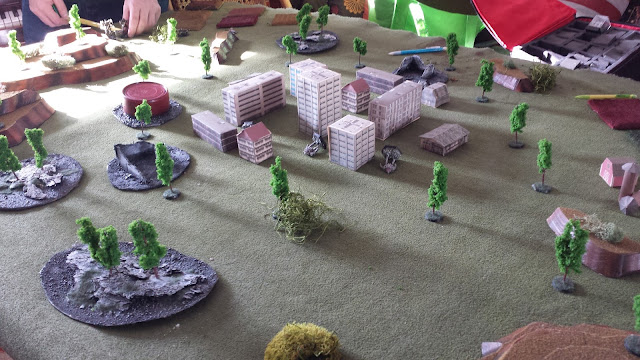 The Outworld Predators, a small mercenary company garrisoning Calish III, appear to have been destroyed by unknown parties. Alliance forces are on the way to investigate, but both the 1st Argyle Rangers and the Dogs of War intercepted the Predators' distress call. Both forces intend to investigate, salvage what they can, and depart before Alliance forces can arrive. 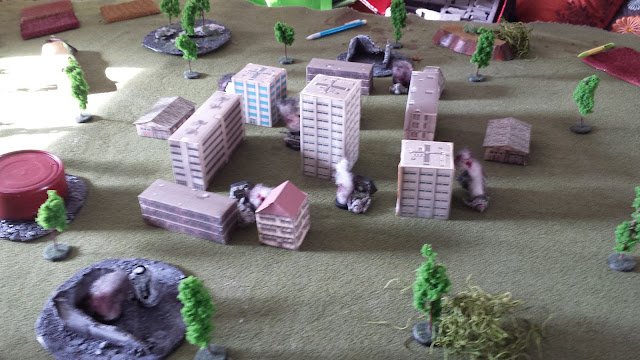 Battle 1: "Mystery on Calish III"
Orbital scans show the detritus of a battle between battlemechs still smoldering near one of the largest settlements on Calish III. Both the Dogs of War and the 1st Argyle Rangers have dropped near the battlefield and are sending recon elements to investigate.

Deployment: 5000 BV is deployed on the short table edges. The center of the board is a farming town, with numerous buildings close to the center and farms. Closer to the table edges there will be woods and a few hills.There are 6 ruined mechs/tanks are scattered around the middle of the board. You need to get within 4" of a wreck to scan it, with no shooting that turn. Any vehicle, excepting aerospace, can scan a mech.

Objectives:
Investigate: 50 points/mech scanned
Lightening Raid: 100 if more than half your force survives and exits back to table edge.

Special Rules: Forced Withdrawal is in effect for both sides.

Optional:
Thunderstorm: +1 to all shooting and +2 to pilot rolls for any air vehicles.(100 to victor) 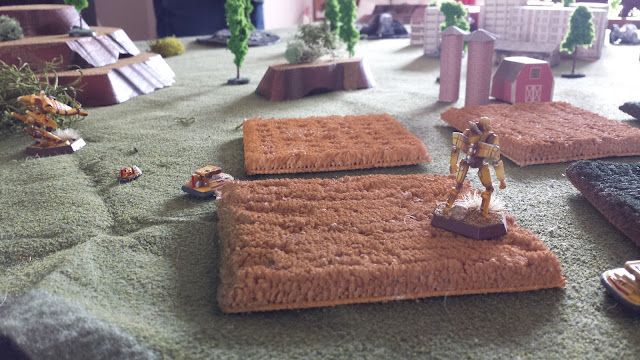 The Rangers detach a lance of hovercraft from their cavalry company, supported by three mechs, hoping to get in and get out before the Dogs of War can try and pull them into a fight.  The thunderstorm is raging without an end in sight, so Captain Laval is unwilling to risk his more expensive air assets. Instead, only one hotshot young pilot, Sgt. Greyson, is deployed in a conventional Mechbuster fighter. 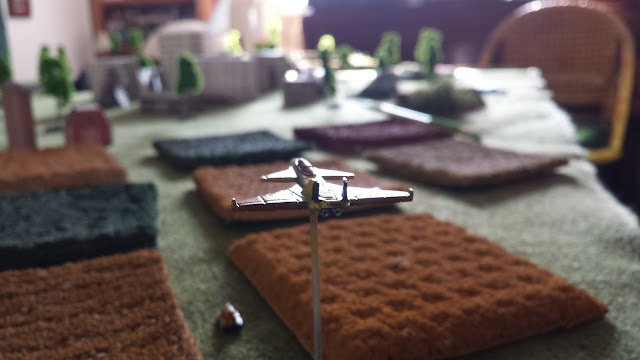 With the Dogs of war risking a Shilone heavy aerospace fighter, Greyson is charged with keeping the enemy fighter busy as the Rangers' fast forces rush forward to scan the wreckage. 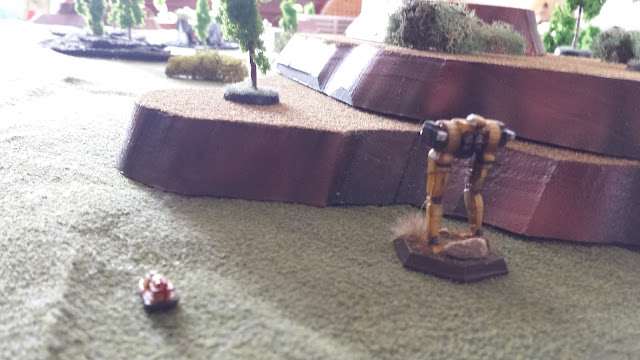 The Dogs of War are cautious, deploying a surprisingly heavy mech force of an Awesome and Trebuchet. 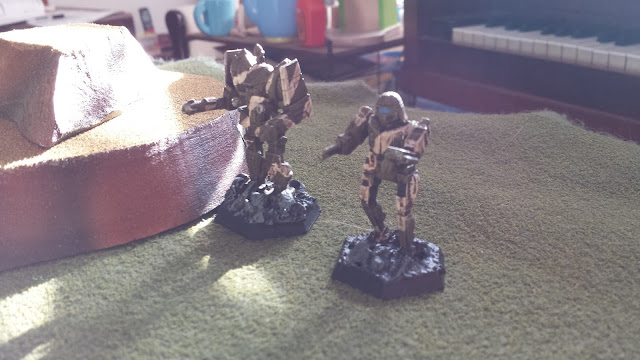 ...supported by a Rommel tank. 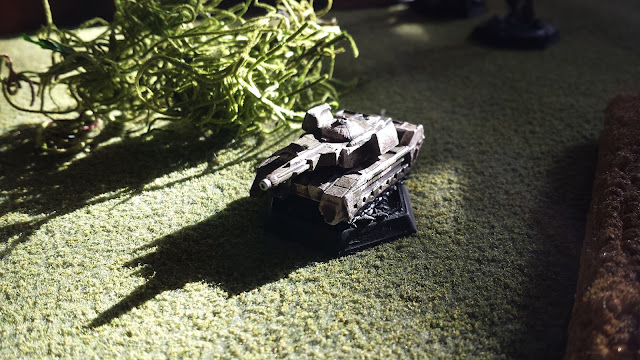 The Rangers force is far lighter, with  Spider and Jenner light mechs, anchored by a Crab medium mech. But the real work will be done by the two Pegasus scout hovercraft and three ultra-light Savannah Master hovers. Fearing the enemy's air superiority, the Rangers advance in a loose line. 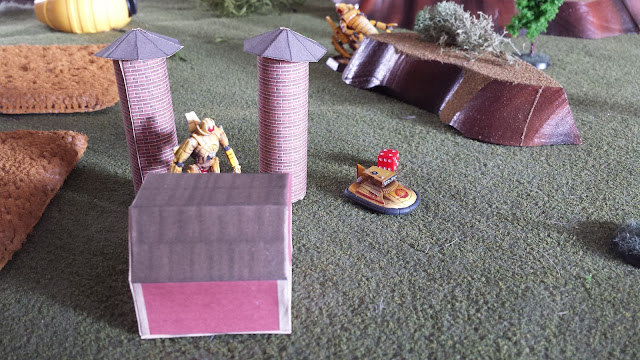 The enemy advance in tight formation, a tempting target for a Mechbuster's AC20 in a strafing run. But any return fire would be likely to shoot down the fragile plane, so Greyson doesn't risk it. 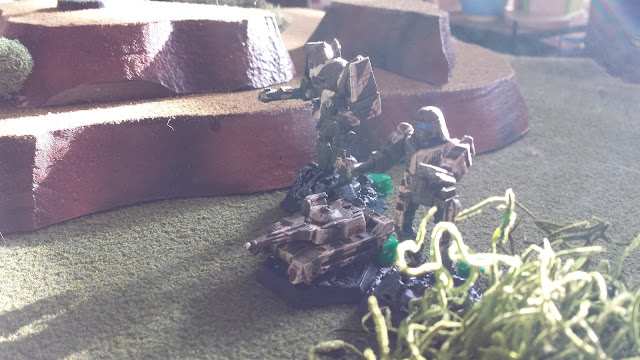 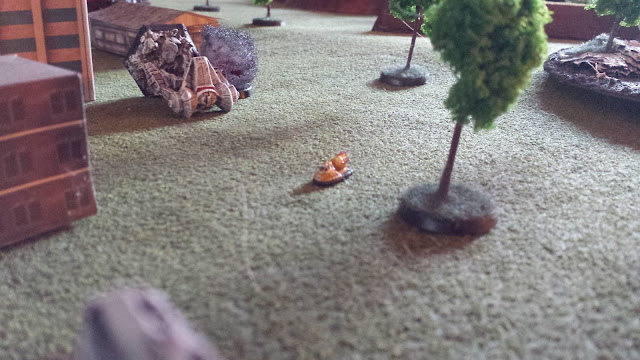 While the other hovers enter the city to scan two more. 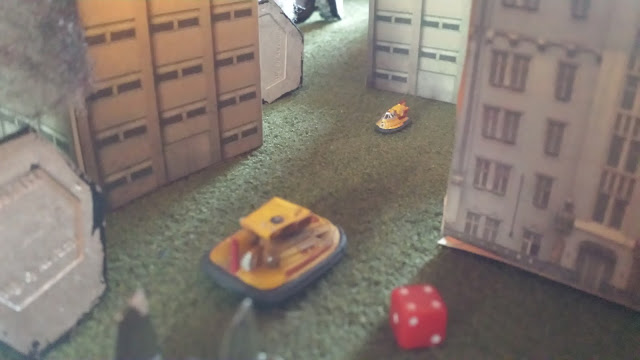 Eventually all six burning hulks are scanned before the Dogs of War even enter the outskirts of the city. 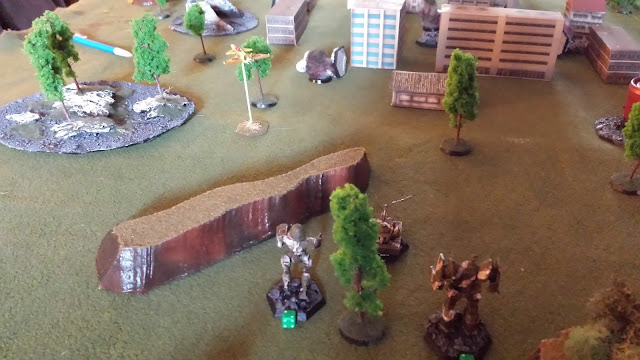 The only real contact with the enemy is in the skies, as the Shilone takes aim at the lightest of the Ranger mechs, the Spider. Thanks to the storm, the damage is minimal, but it could have been far worse. Taking advantage of the opening, Greyson slides into the Shilone's rear and unleashes a mighty AC20 round, hitting the enemy plane and knocking it out of control! 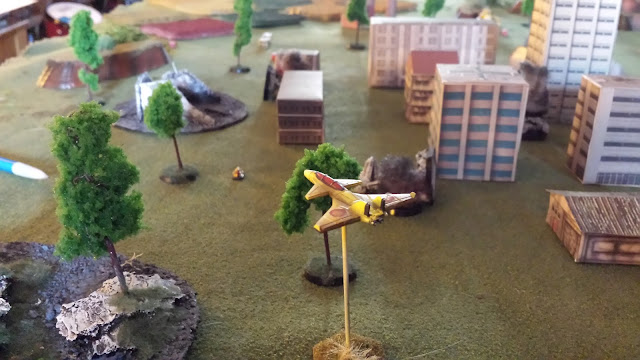 However, the Mechbuster's flight path is just  at the edge of the Trebuchet's long range missiles, a few of which manage to clip the plane, sending it too veering out of control. 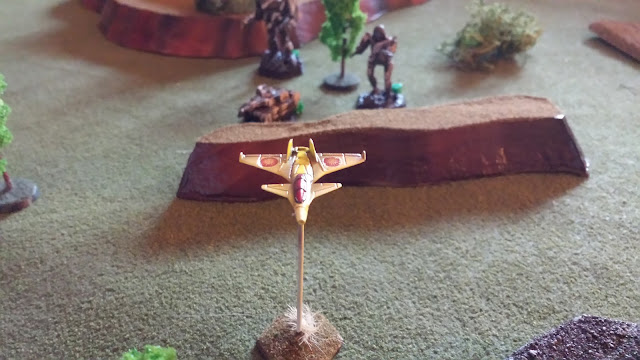 As Greyson maneuvers erratically, trying to regain control of his plane, the cavalry radios that the objective is completed.  A general withdrawal is ordered - "all units return to the drop site." 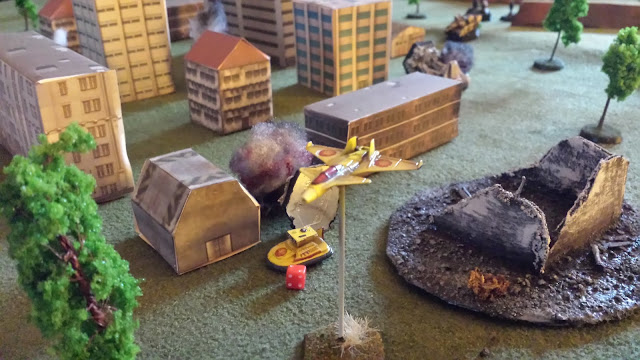 The Shilone, flying at slowly at low altitude to line up its earlier attack run, is unable to regain control before it stalls in midair, sending it into a downward spiral.  The pilot nearly manages to pull up, but the strong winds work against him, and he's forced to eject just before his plane hits the ground. 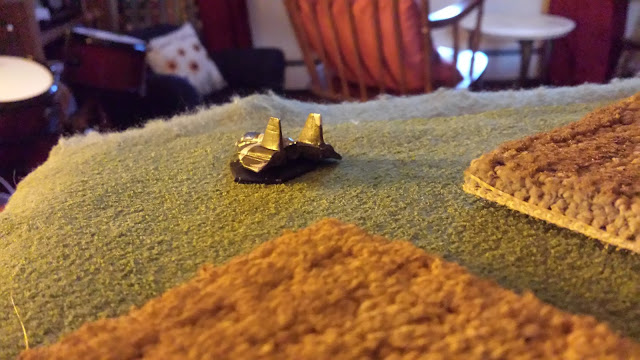 Meanwhile the Rangers successfully withdraw, with only the Spider having taken any damage. 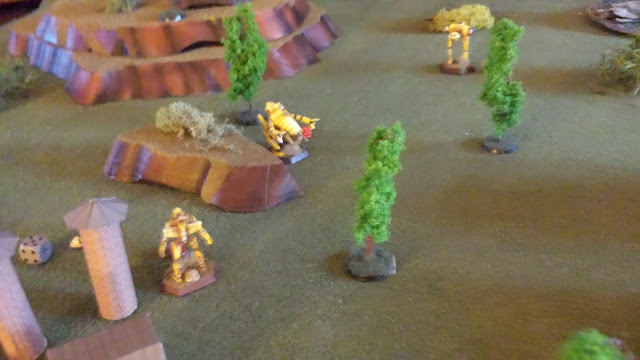 The Dogs of war finally reach the outskirts. 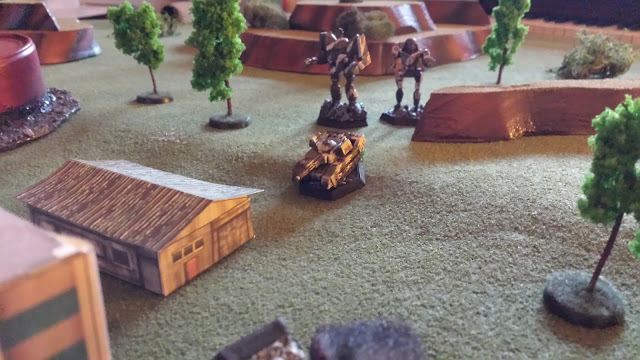 Greyson, rapidly losing both speed and altitude, manages to pull up seconds before the plane hit the ground, regaining control and setting his sights for home. 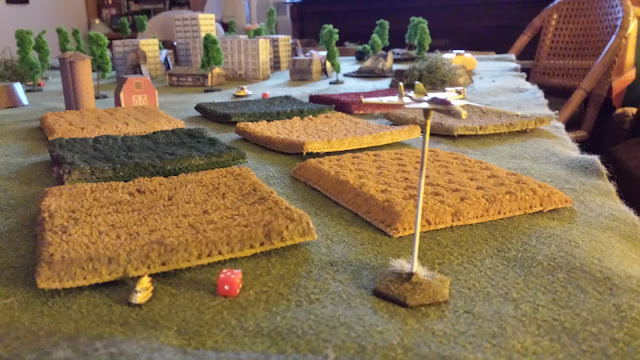 As do all other units. 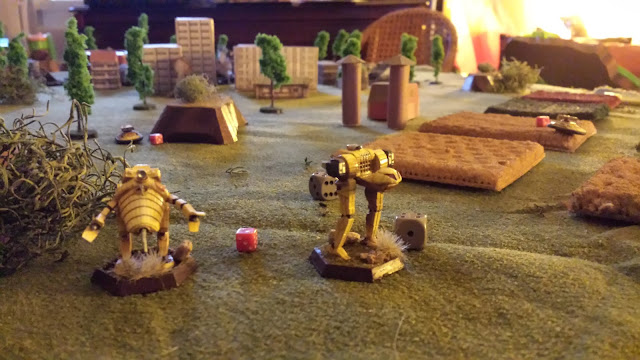 The Dogs of War enter the city and start scanning. 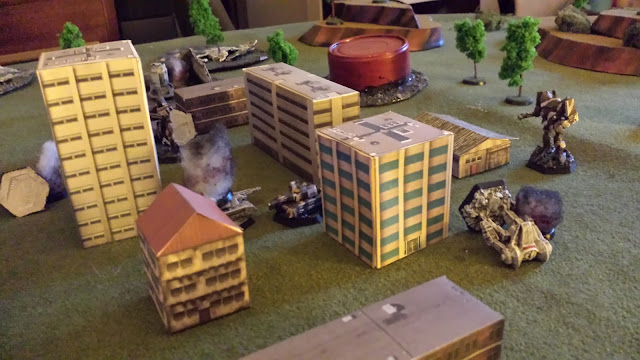 Just as the last of the 1st Argyle Rangers begins to move on. Learning the ruined mechs comm frequencies, the Rangers detect a faint distress call coming from the mountains. One of the mercenary pilots is still alive!  Before the force even returns, Captain Laval begins to put together his team for a rescue mission. 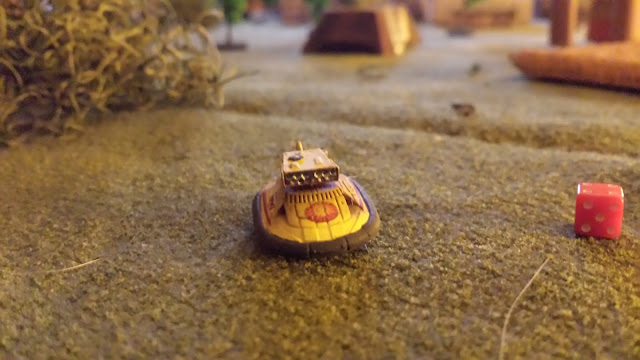 The Dogs, as soon as they're done scanning the ruins, will probably be right on their heels, as usual. 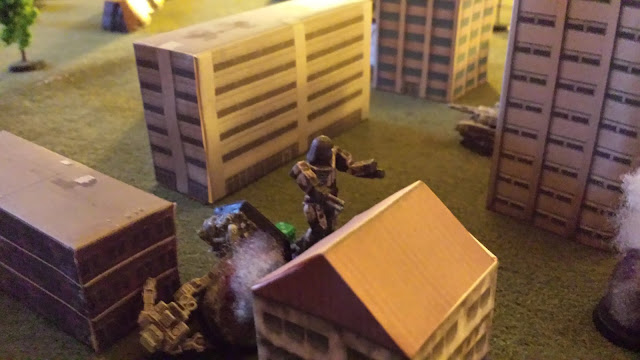 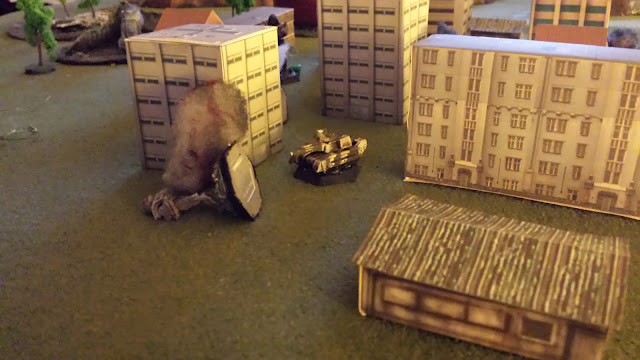 A quick shot of the enemy Shilone's sheet - most of the damage is actually from the crash.  The storm really made it nasty for the air forces! 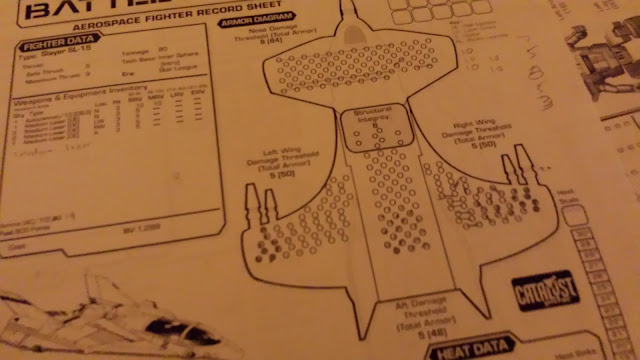