In our weekly game, Fritz and I played out the revised Escalation scenario, and it was much more fluid than the version I played with my wife the other day. The difference is that rather than reinforcements arriving every turn, they were staggered to every other turn, and some of the points were tweaked accordingly. Here's how the scenario currently stands:

7 turns sounds like it will be a long game, but the first four turns go very fast given how little is on the table.
After turn 3, reinforcements can also arrive via the table side to the right of the original deployment side.
Victory Conditions: If either side eliminates all enemy units early on, they win. Otherwise, the standard break-point is used (half of the total number of units).

There's a few less points there than the previous version, which I like much much better.  The reason being is that the most interesting thing about the scenario is the staggered effect it creates on the table and the gradual escalation.  Jumping thousands of points per turn ended up negating the early combat, which was too fun to make meaningless by a sudden increase. In this version, the early decisions really made a huge impact, as we'll see below. The space between deployments also allowed for more time to let the small scale skirmish play out before the big guns started pouring in.

We rolled off for armies, and I got the Martians this time. We set up the table with lots of terrain as usual, and then sat down to write out our lists. We then told each other our breakpoint number, 6 for me, and a surprising 7 for Fritz and his humans. Often the human breakpoint is as much as double the Martian number due to an abundance of cheap units. When Fritz said 7, I knew that I wouldn't see much infantry on the board - oh well, too late to change my list!

Setting: Another skirmish in the marshy Mississippi Delta north of Vicksburg. Wetlands on the Martian right offer no real cover.  Both sides avoided the rough ground and deployed to the left. 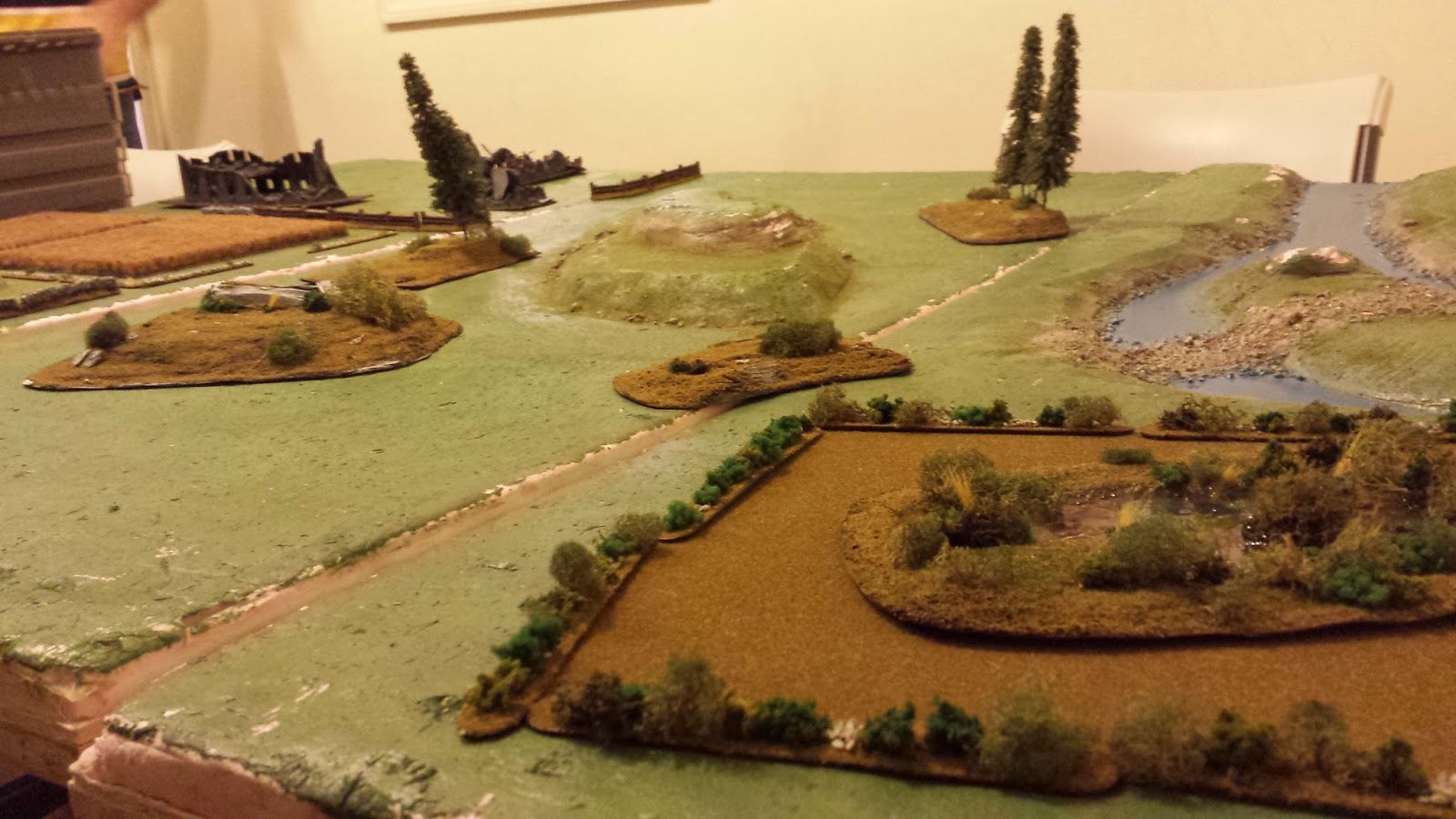 With 150 points, the Martians can't get much better than a Scout: 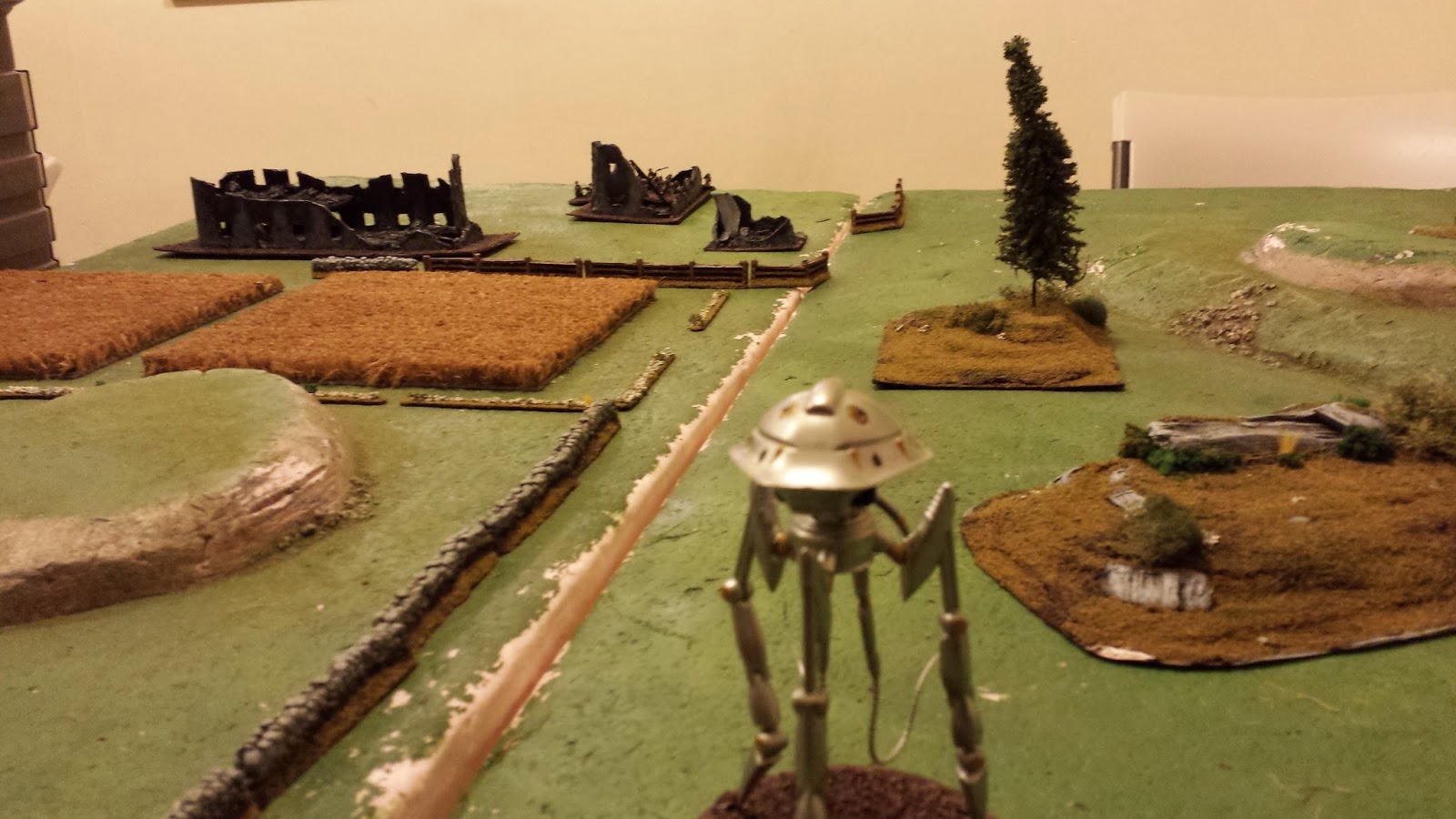 Fritz decided to start out with just two HMGs, saving the excess points for his turn 3 deployment. He hid them in some ruins in the back, before separating them among the two small buildings. 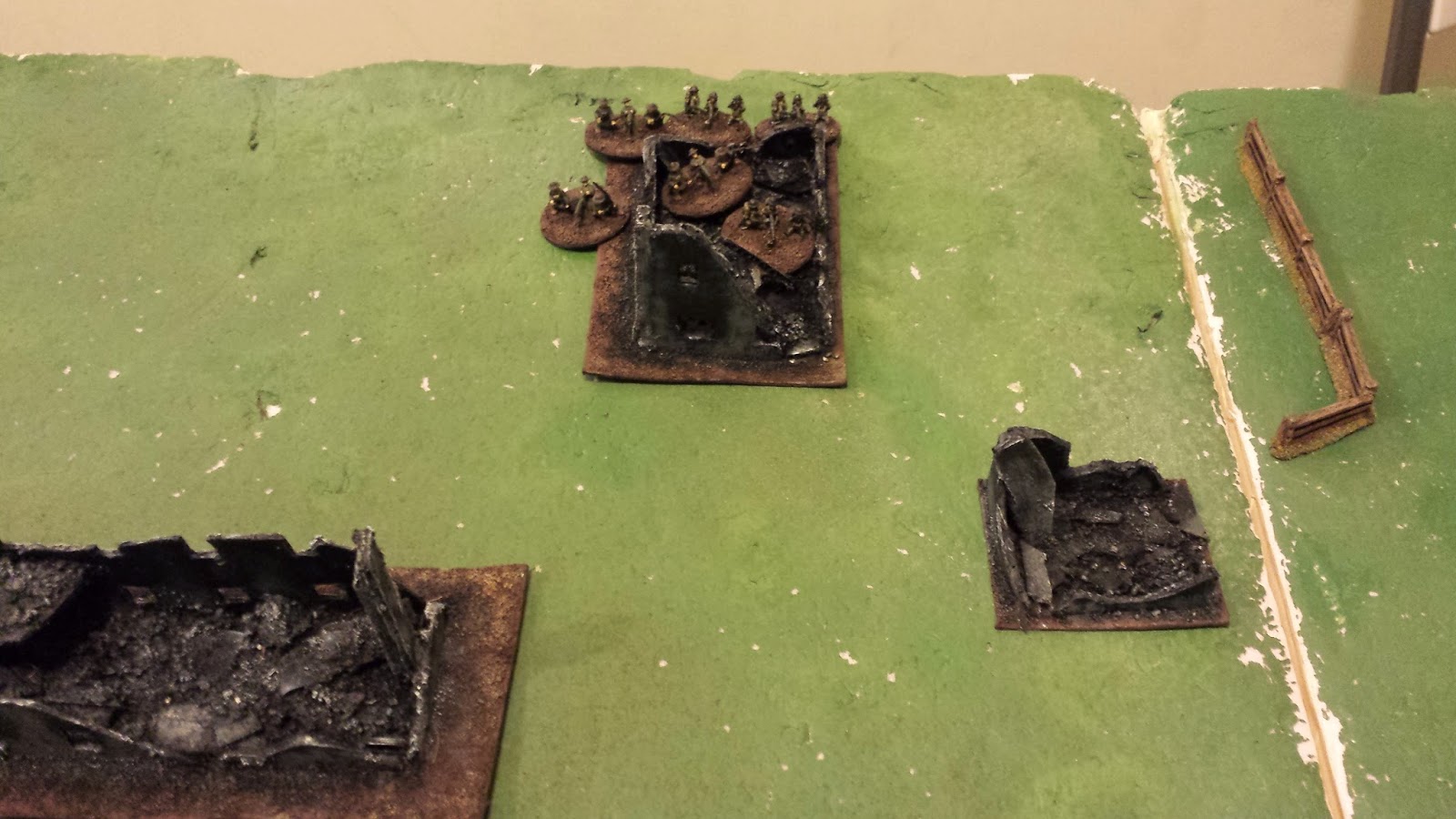 The Scout warily approached, using the trees to mess with the HMG's line of sight, but neither side was in range at the end of the first round. 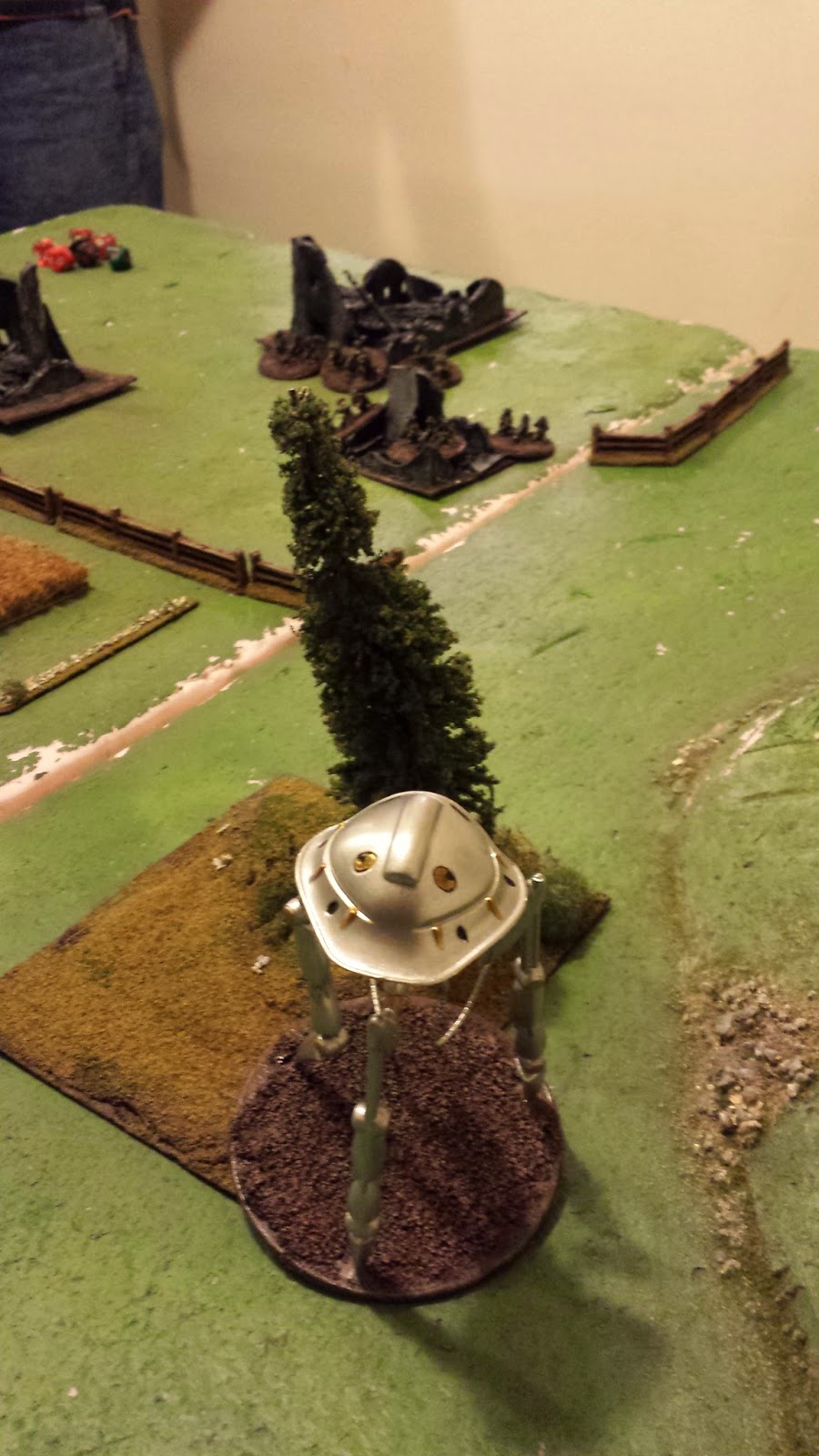 On the second round, the Scout moved up and managed to partially destroy, rout, and then rush/destroy one of the HMG units, destroying them. 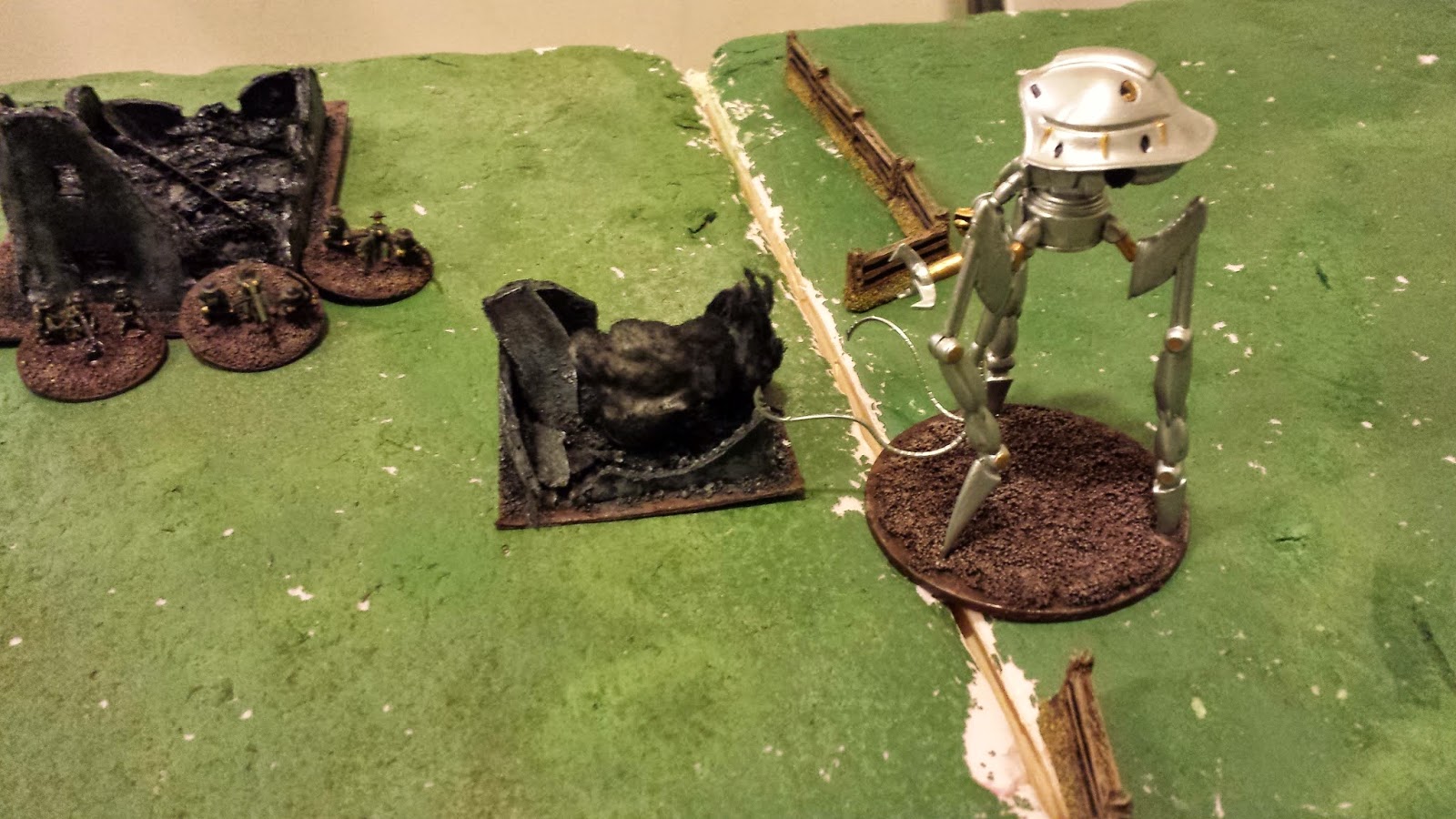 This left the Tripod in a vulnerable position going into round 3, but I judged it worth it. Still, a scary sight! 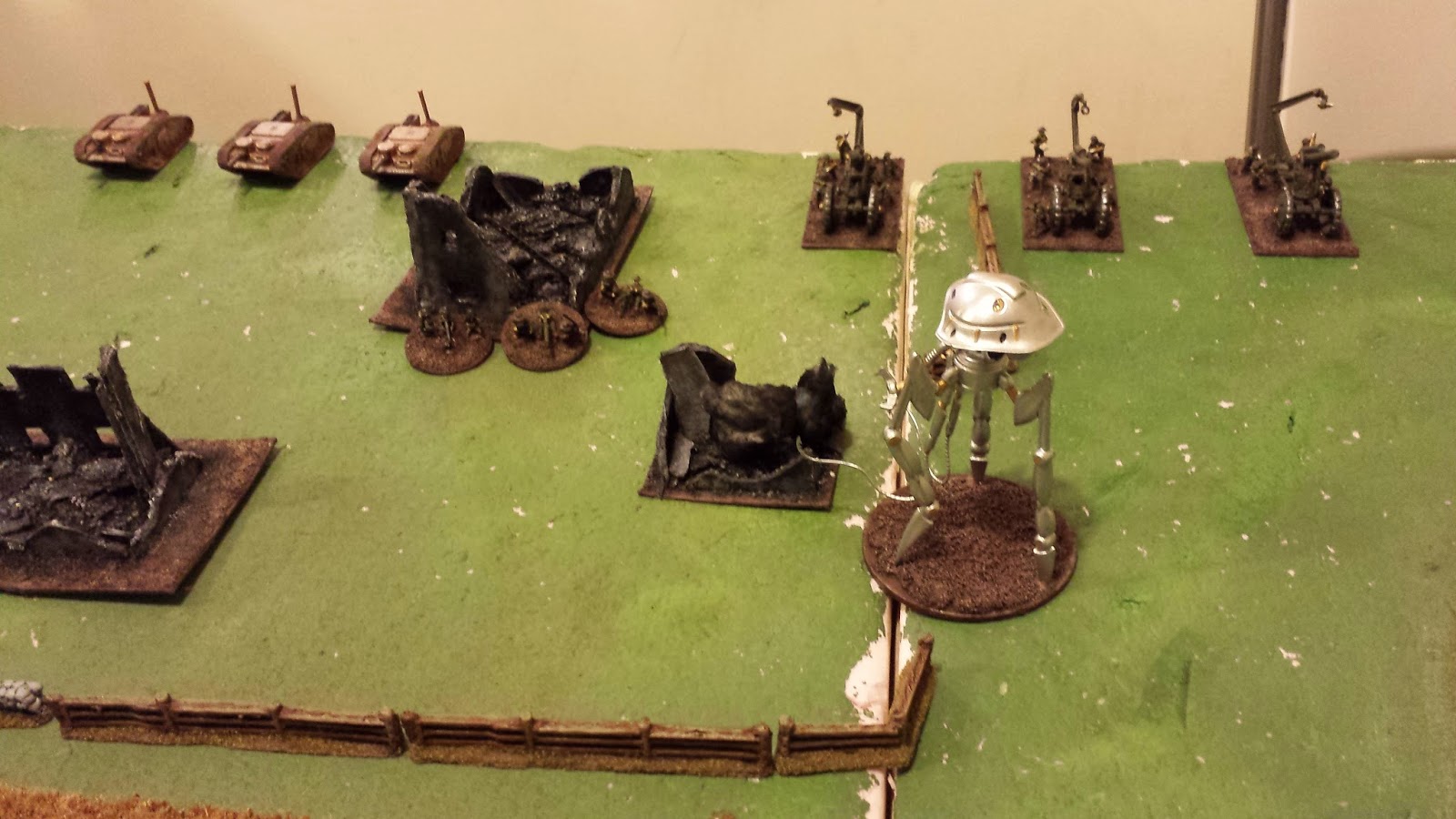 Martian reinforcements arrive - An assault tripod and a unit of the dreaded Sniper Drones. And yeah, up to this point I deployed exactly as my wife did - hey, it worked for her!  Also, I won initiative again, as I would for nearly every round this game. 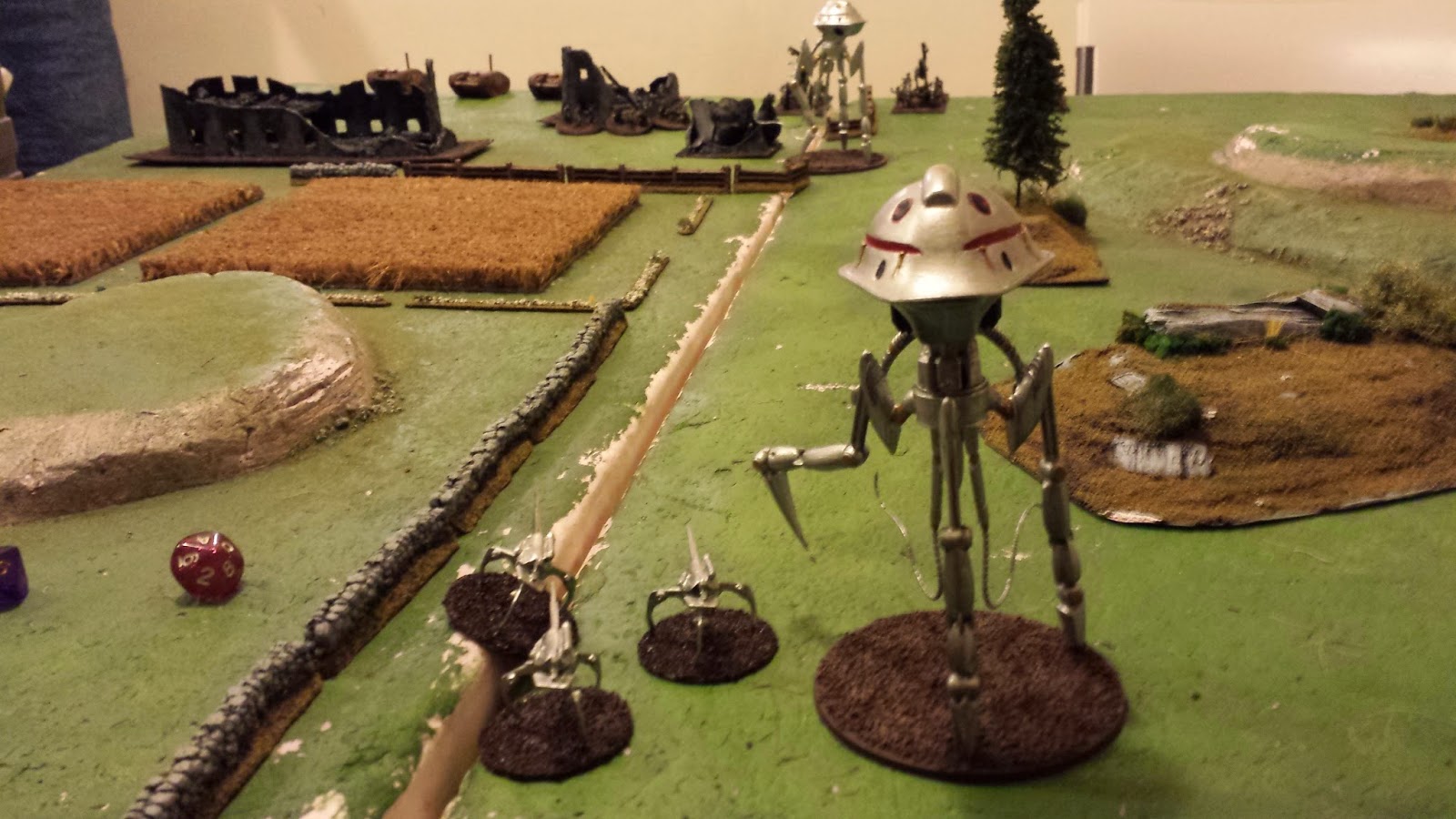 I used two orders to move up the Assault Tripod and drones, and they fired on the tanks (actually, the only thing they can do when tanks are a valid target) while the Assault Tripod shot a concentrated blast of heat at the Heavy Artillery.  The Artillery routed, and was rushed by the Scout (out of frame below). 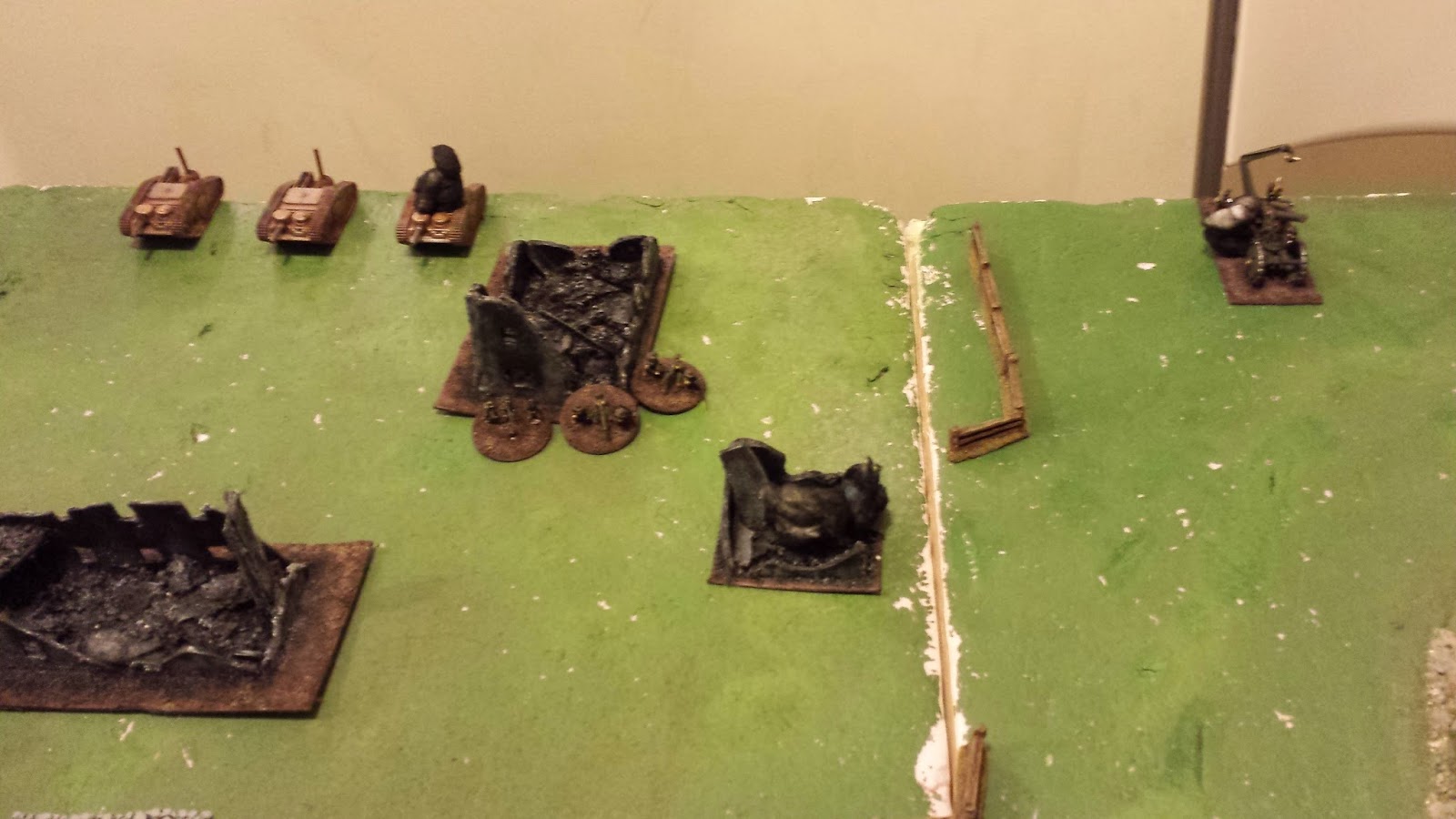 The human counterattack concentrated entirely on the drones.  Fritz is a smart player and went after the soft target. It was a successful strategy. He then concentrated his fire on the next weakest unit, the scout, which had its weapons damaged and some armor knocked off. 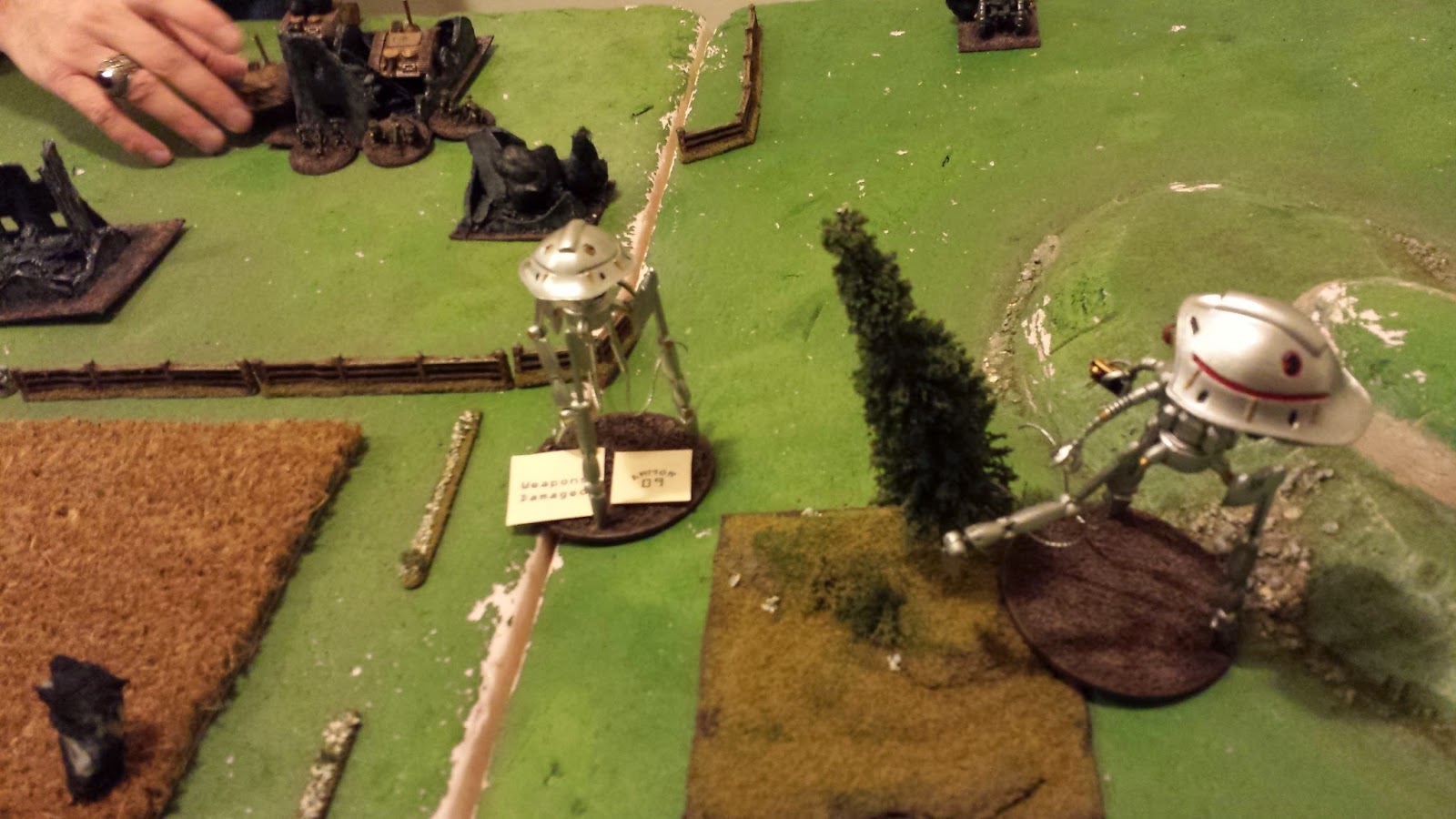 On round 5, I brought in another assault tripod, this one with Black dust, a grenadier, and a slaver with a unit of scorpion and shock drones. 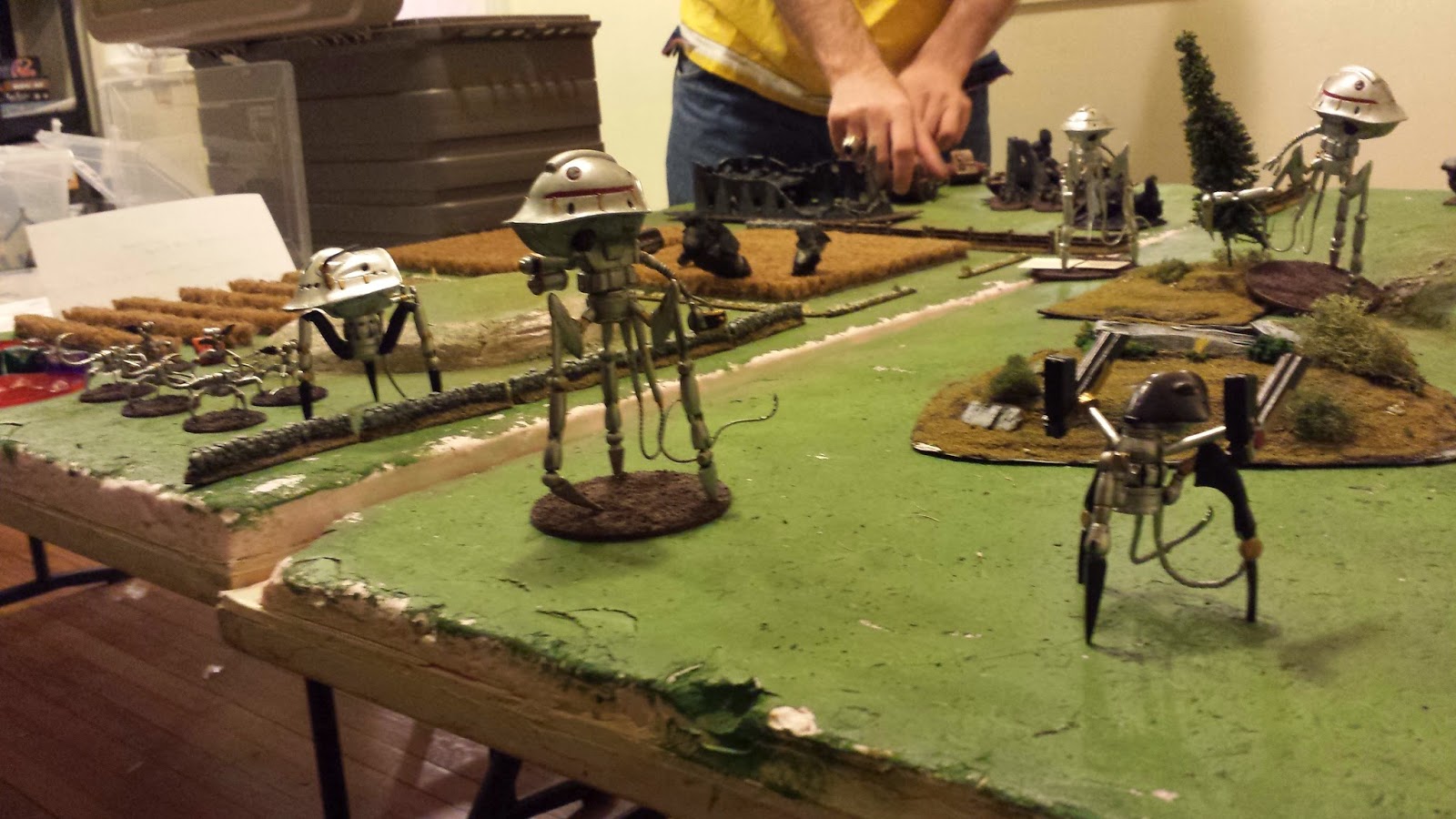 Fritz brought on his big tanks, two units of MKIIIs, castling up in that back corner behind the ruins. 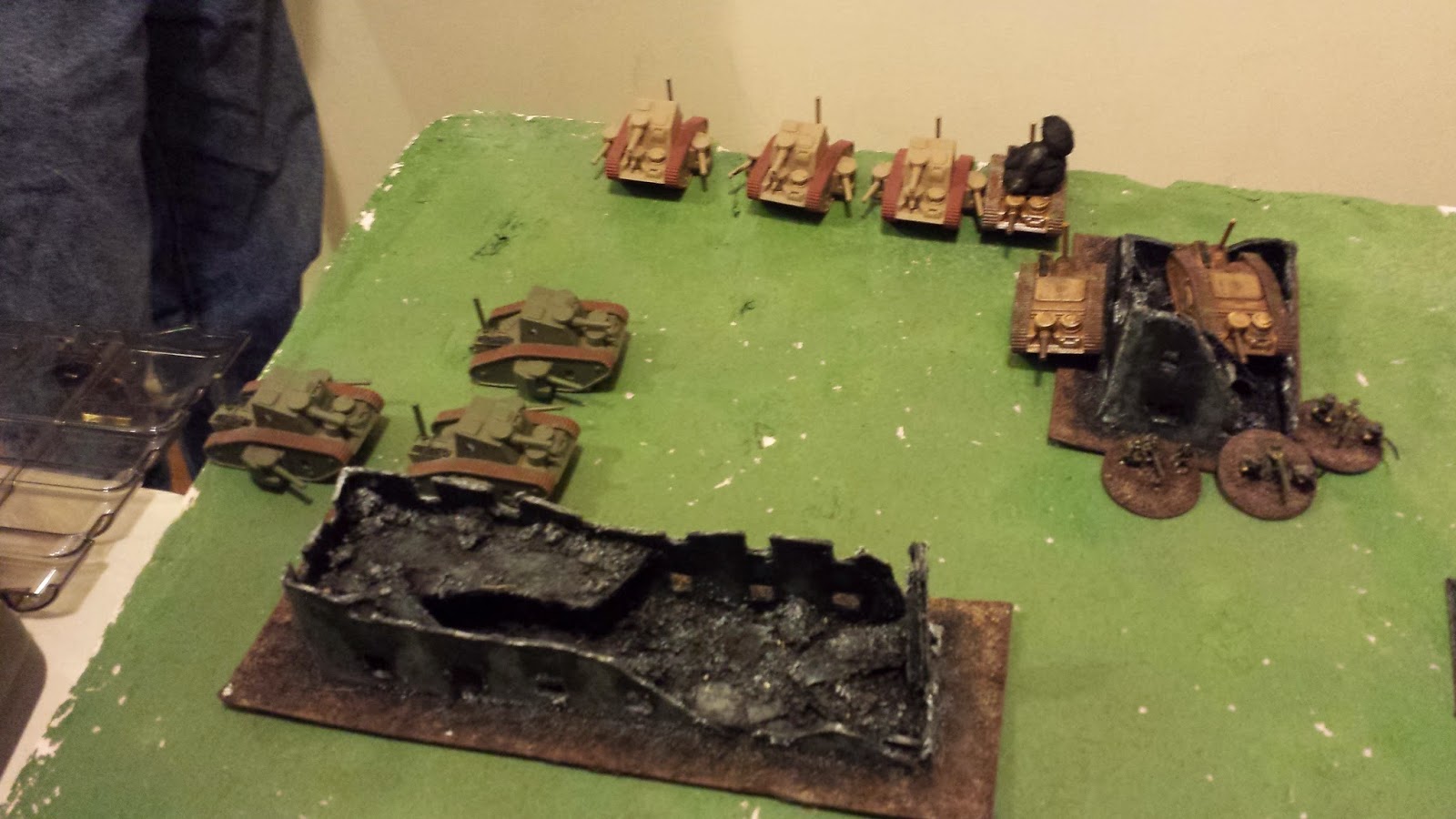 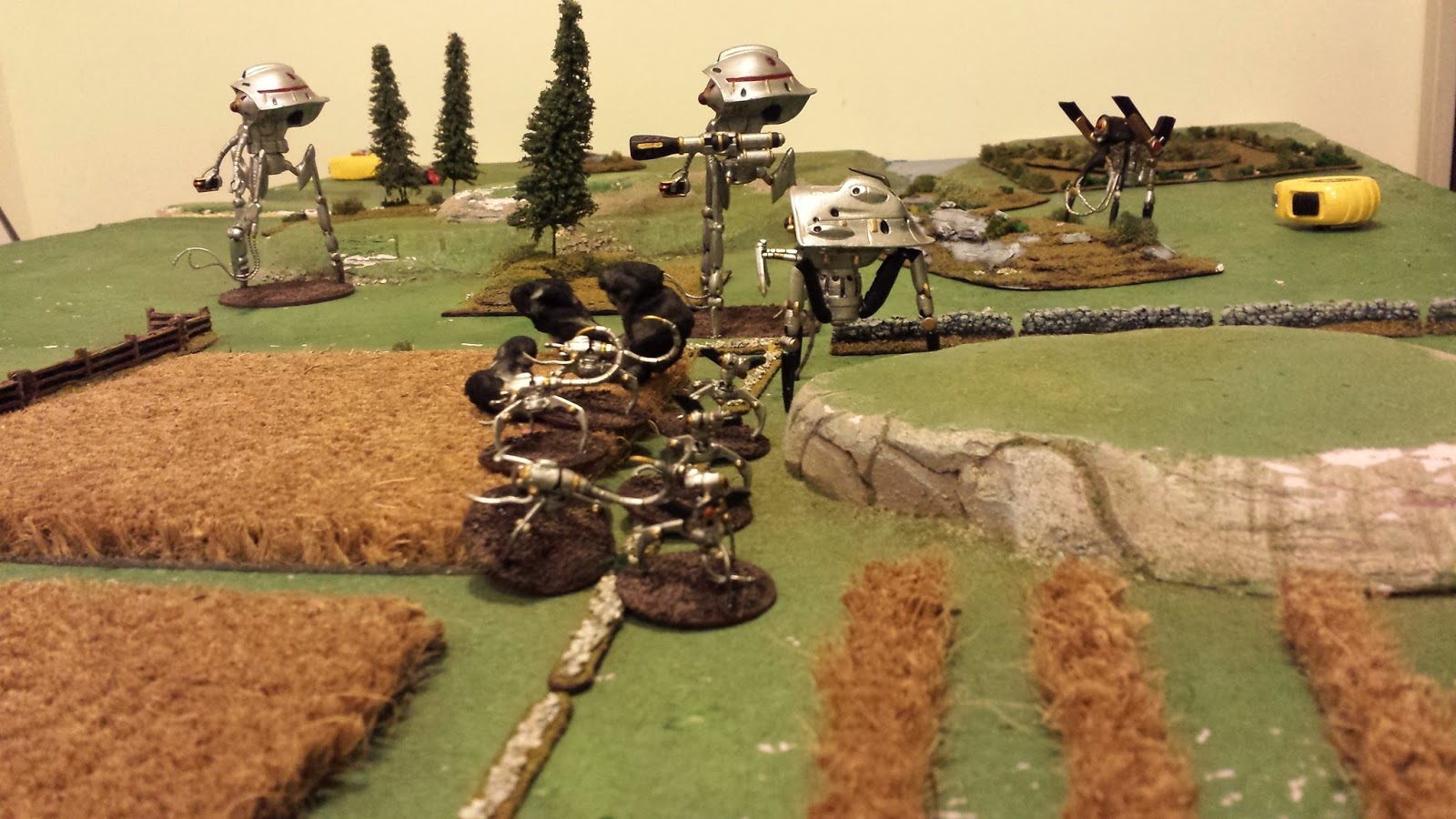 I could see Fritz getting nervous as I started boxing him in... 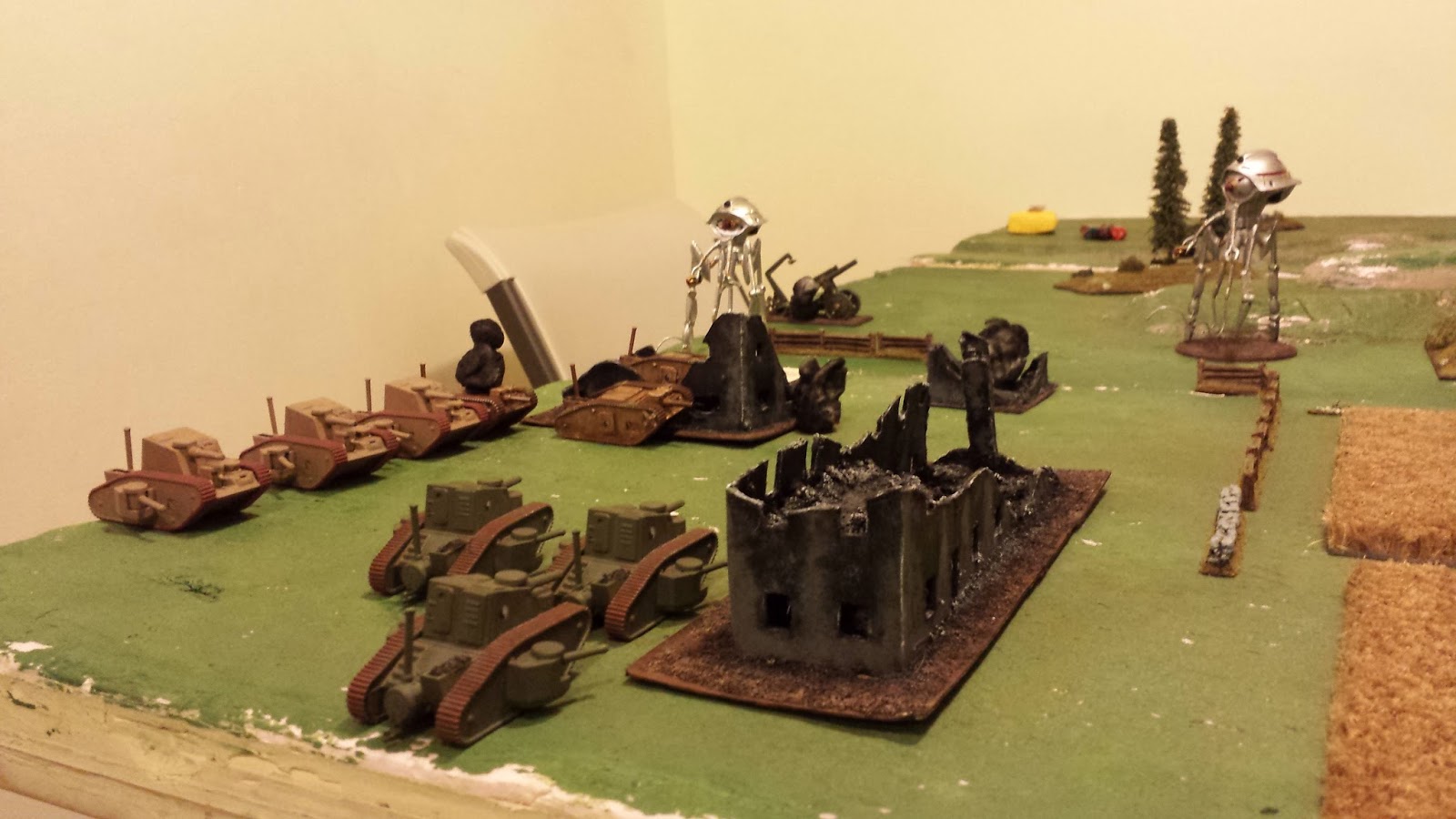 On his turn, he used the US's Industrial Might rule to bring back his Artillery, which, along with the tanks, finally took down that scout. 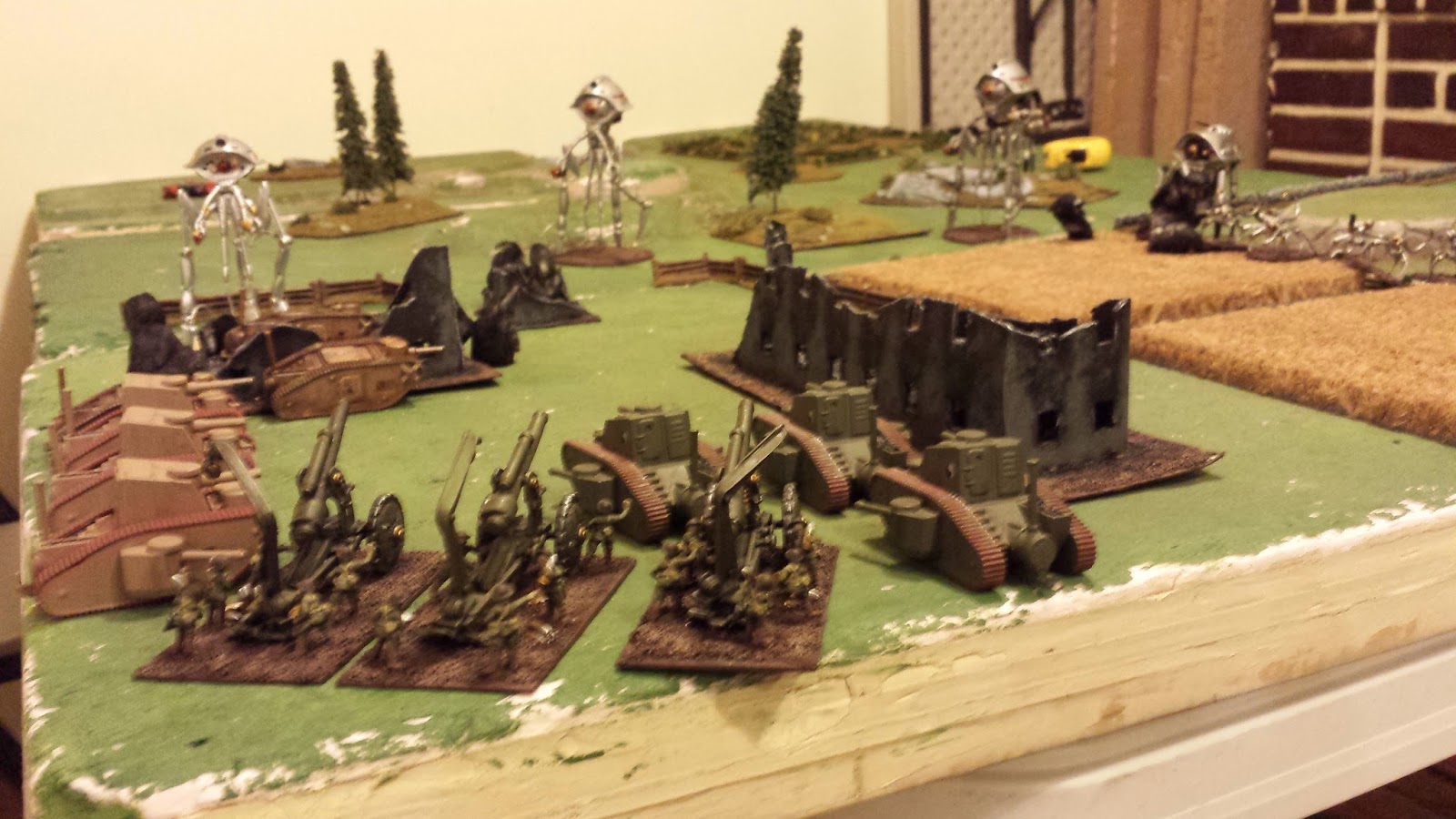 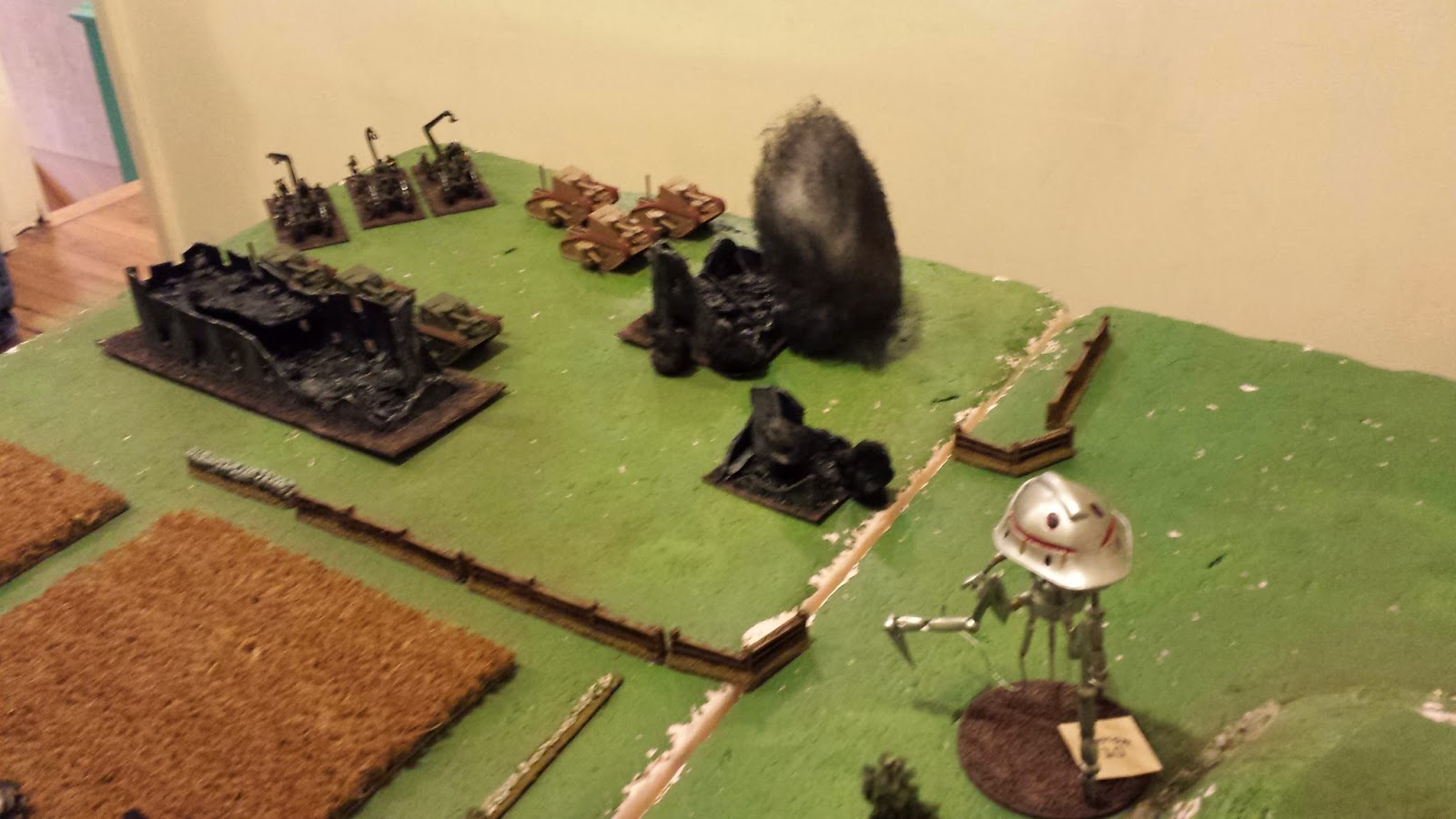 But the Martians had already hemmed him in pretty tightly... 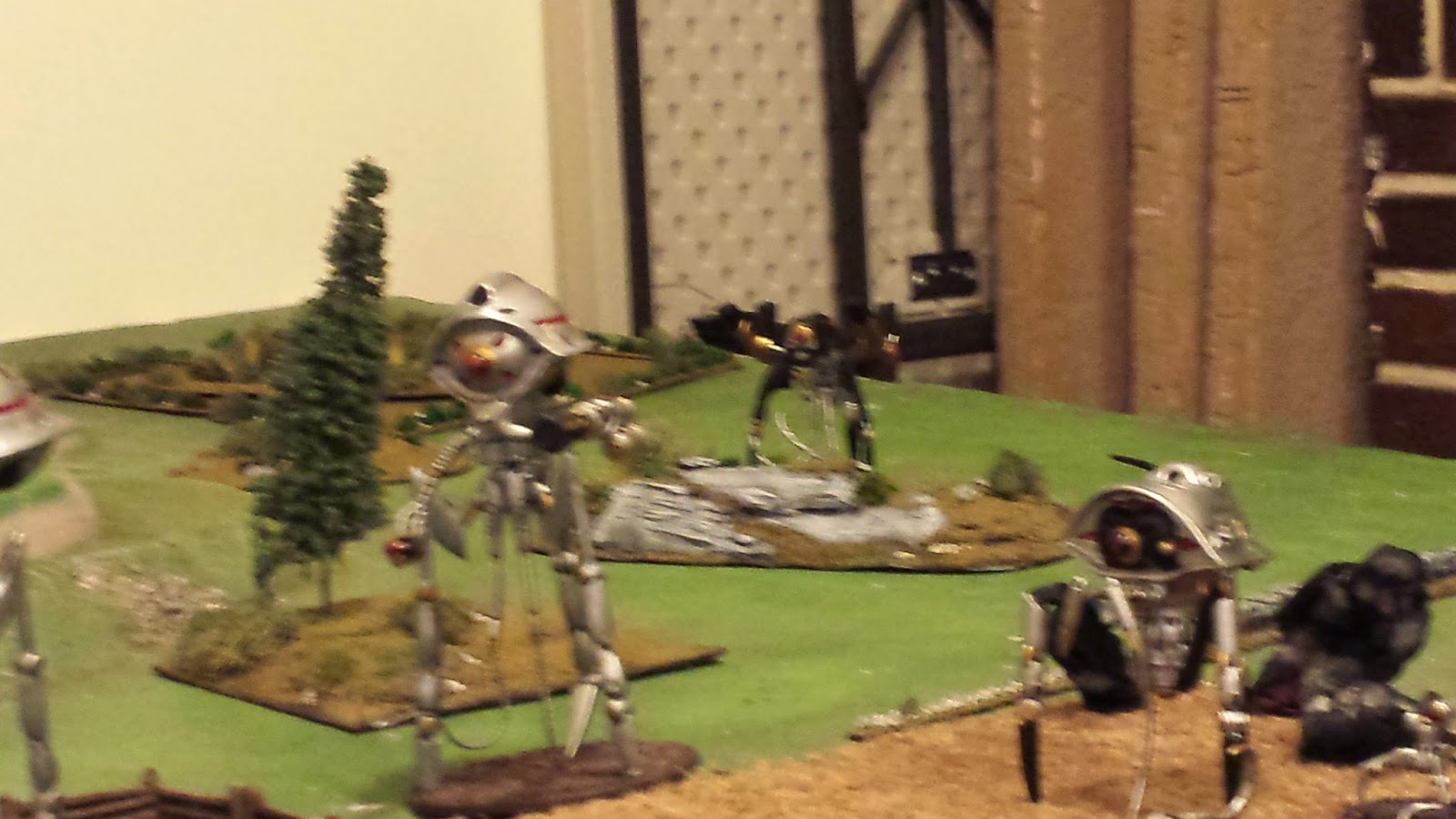 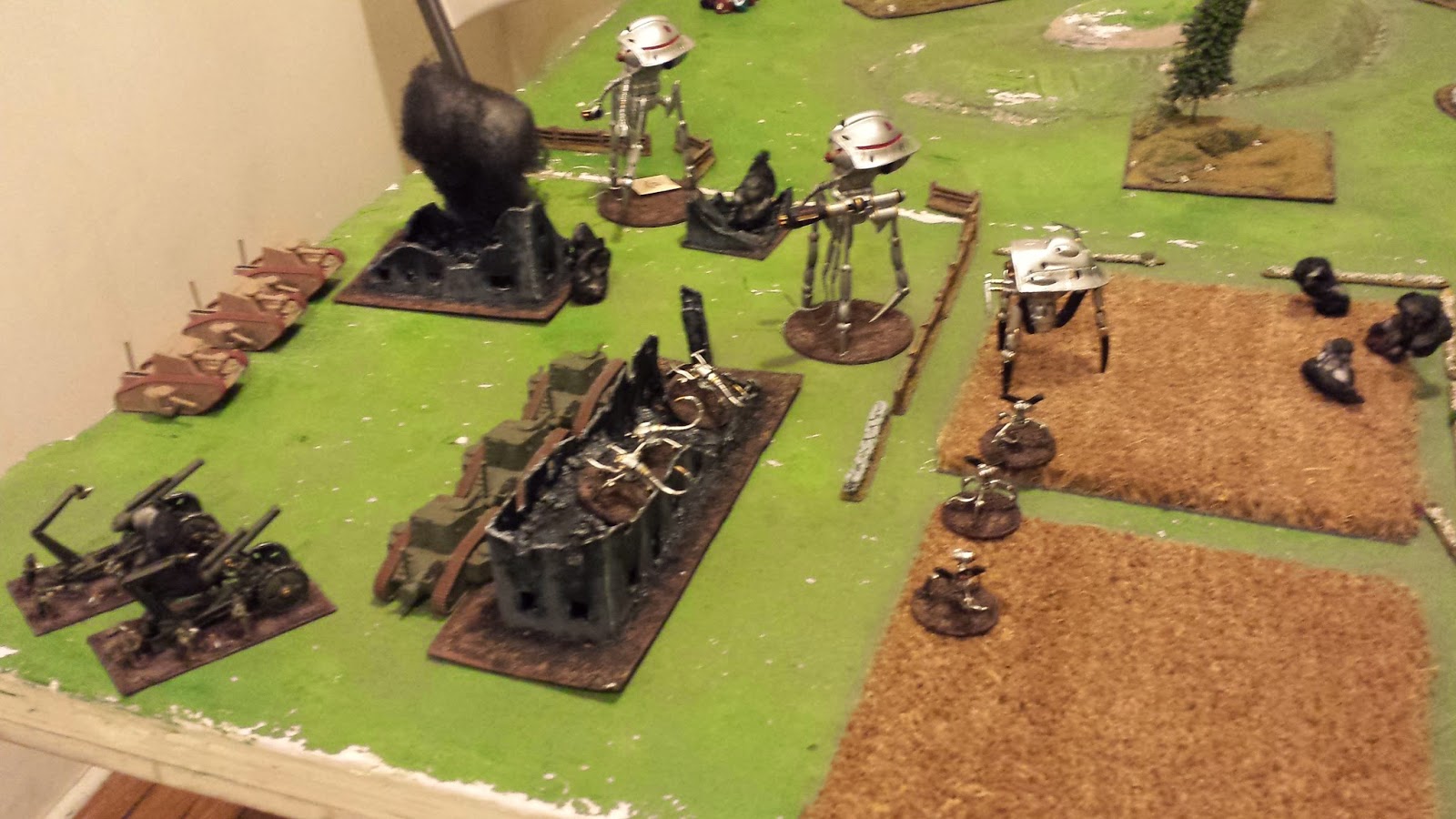 The US Army finally won the initiative and took out another Tripod, this time an Assault. 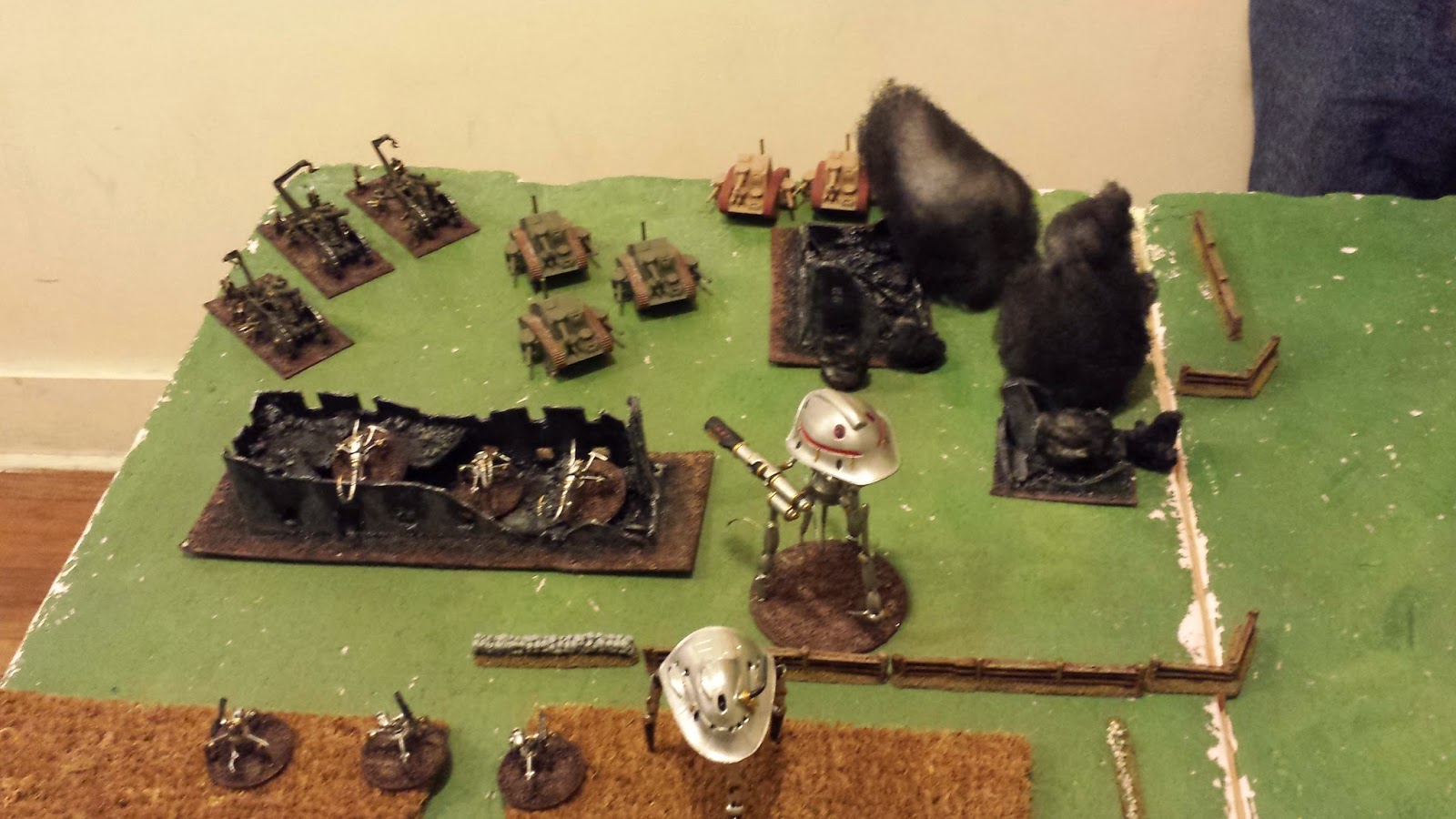 But by then it was time for turn 7 and more units on the board. I brought on two more assault tripods and another Scout, putting the black dust carrying unit a bit further right than needed. I thought for sure Fritz would spread out on that broad table edge towards the wetlands with his new units, to get around behind the enclosing Martian forces... 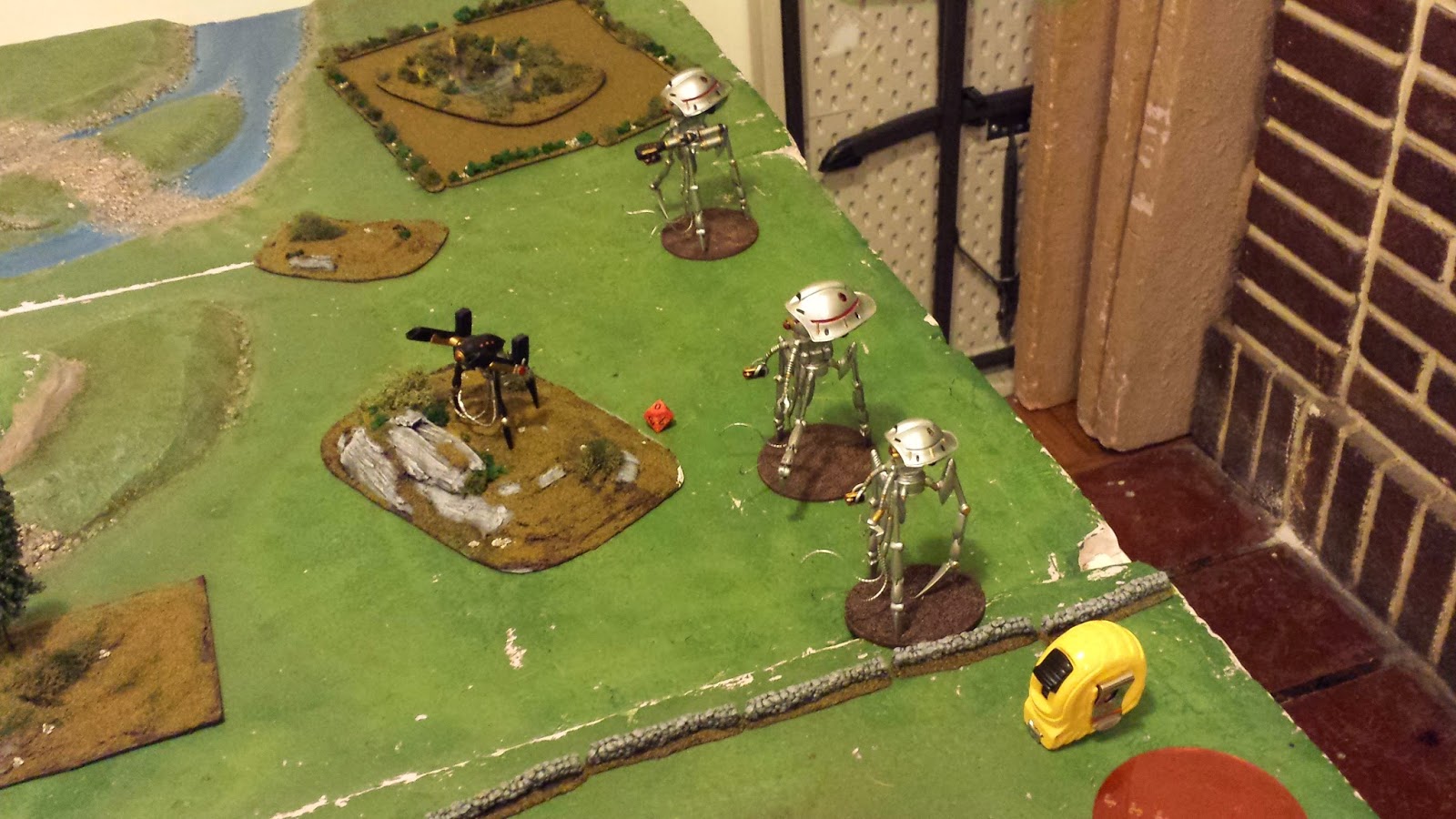 But instead, he doubled-down in the corner, bringing up four infantry units on "his" short edge of the table. 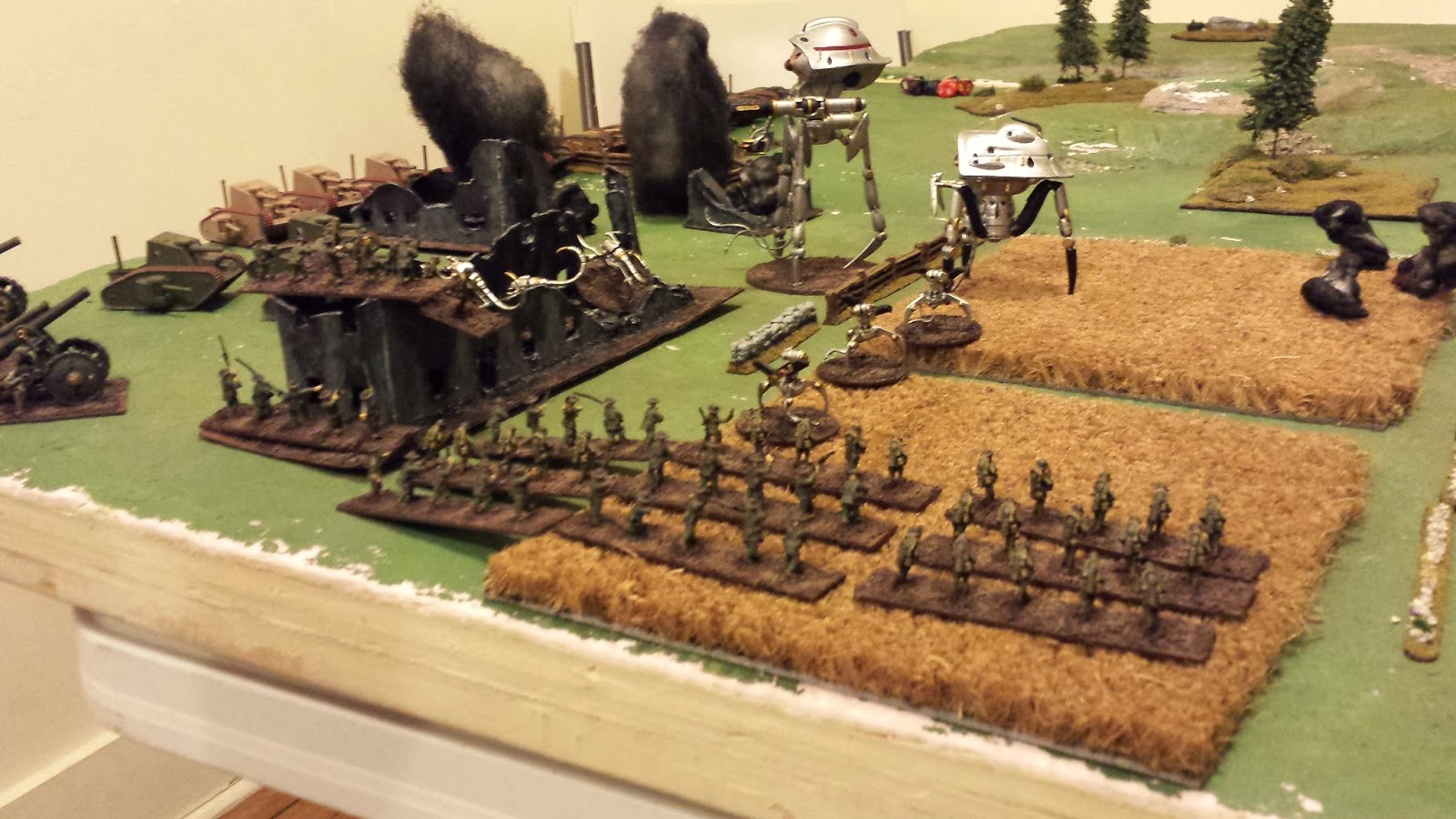 However, the initiative once again belonged to the Martians, and they wheeled around with black dust deploying shock drones, coupled with more black dust launched by the far off grenadier, destroying (or routing and destroying) three of the four infantry units. The Assault tripods made it around the ruins as well, and combined with an assault by the scorpion drones, destroyed some of the tanks which were clustered there. It was more than enough to break the humans and send the 29th Division again scrambling back to Vicksburg. 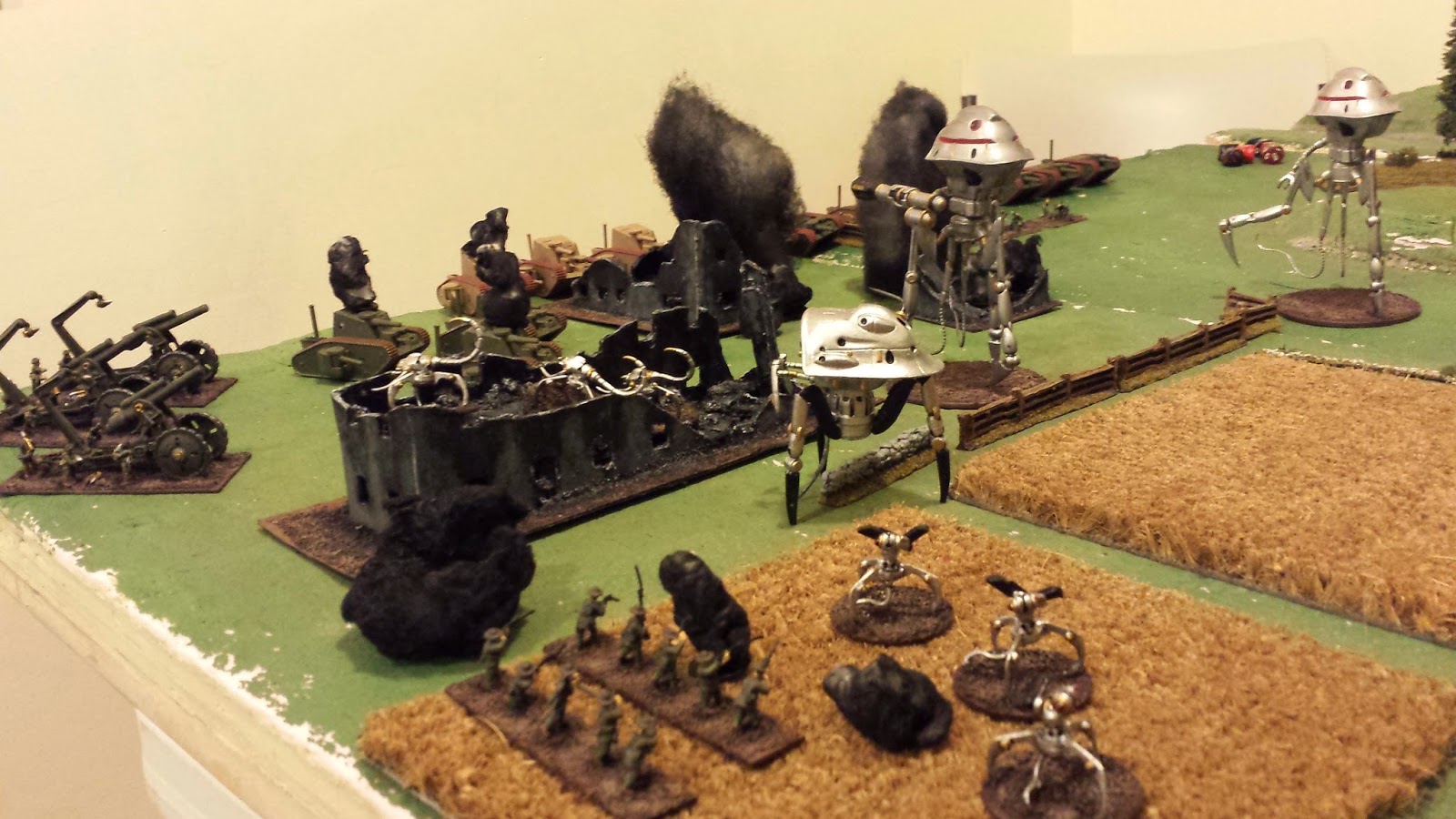 Analysis: Another Martian victory, yes, but a better contested one, and far more tactically interesting than the previous version.  The first four turns saw the Martians forcing the humans into a small box in the corner of the table, and Fritz had a tough choice to make as he deployed his last two groups - give up the area, or double down. That kind of choice is what this scenario is intended to be about, and for that reason, I'd say it was a success. Even with few forces on the table, the result of the skirmish entirely set the stage for the developing larger battle, and it was wicked fun. I'm looking forward to trying the battle again as the humans sometime.
Posted by Unknown at 1:24 PM