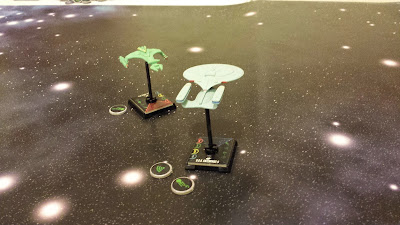 Edit: Fritz posted a battle report from our games here.

Ok, this isn't another salvo in the Trek vs. Wars debate. Well, not entirely... but certainly the larger questions loomed in my mind as I compared, with intention to purchase one of them, the Star Wars miniatures game X-Wing with the Star Trek version, Attack Wing.

I was disturbed by the result of my ruminations. I realized, to the horror of my younger self, that I now prefer Trek to Star Wars by a rather large margin.  It's not just the prequels (which are perhaps balanced by the unwatchable Kirk-era Trek), but even the originals don't do it as much for me anymore. The stuff I've always complained about Trek still counts for something: I'm not much for episodic storytelling, most Trek is too utopian and unrealistic, with a deluded understanding of human nature, but I've begun to appreciate what it does have to offer: intelligent scenarios, better science than Star Wars (not saying much really), and some really interesting thought experiments. Sure, Star Wars looks better, has more of that ineffable "badass" quality we all enjoy, but it is starting to look a bit like kid stuff, and for all it's "gritty darkness", the simplicity of the black/white morality  of Star Wars is starting to look even more naive than Trek's utopianism. 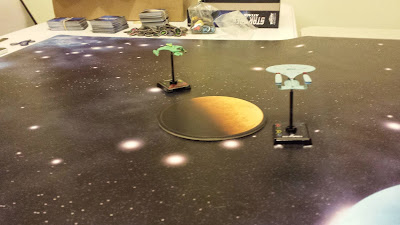 Maybe this is because I've finally gone beyond Rodenberry and discovered Deep Space Nine and Voyager, but Trek has really grown on me. That might have something to do with my final decision. Either way, here's my review of these two games, and an explanation (mostly to my younger self) of why I ended up choosing to invest in Star Trek Attack Wing rather than the more popular X-Wing.

I played X-wing first, because it's fucking Star Wars, and I've always loved Star Wars. I was a touch disappointed that it didn't include Star Destroyers, but of course that would be way out of scale for a dogfight game.  My buddy Fritz has all the toys and we played a couple of short games after some All Quiet one week.

Short is definitely one of the selling points of this game. It plays fast and resolves fast, at least on a small scale. I was looking specifically for a game I could play in a short amount of time with my wife, as we rarely have the time or energy after work to set up an All Quiet game with all that terrain, the boards I have to put down to extend my dining room table, etc. X-wing attracted me because I could throw down a star mat and play on a space that wouldn't require much set up. I might put down some asteroids but other than that, the game could be set up in about a minute, and potentially finish in a half hour.  A game the wife and I could even play after late night at work.

After playing with Fritz a few times, I was pretty sure X-wing was going to be the next game I picked up. It nearly was, but I decided to ask Fritz to bring Attack Wing so I could give it a shot just to compare. I'd heard a few things about it that made it intriguing. So last night, we played about four games of it. 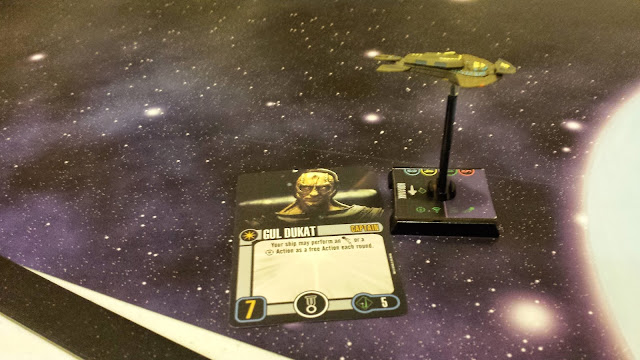 I like it better, no doubt about it. If you've played these games, you know that system-wise, they're nearly identical.  They use those little cardboard templates for movement, the dials, actions like evade or focus, and even the same type of dice system. They also both use cards and points to select pilots, special equipment, etc. So why attack wing?

1) Variety: Trek has more independent factions, and a larger variety of ships. Also, way more cards, which I'll go back to in a moment. X-Wing only includes 3 factions: Rebels, the Empire, and Scum (bounty-hunters). 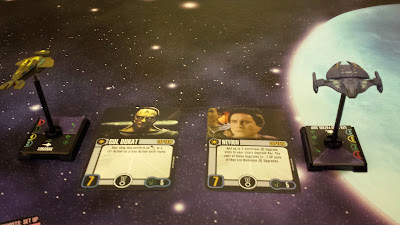 2) Less redundancy: Let's be honest - you're not going to just have an x-wing, you're going to want at least three. And three Tie-Fighters, etc. In Trek, you don't really need or want that. In a way, if you want an intense game, with X-wing you're going to want a few models on the board, but it will tend to be a squadron of the same ships. With Attack Wing, it felt more right to have two or three different ships on one side, and that led to a much, much larger variety of choices tactically than x-wing does. 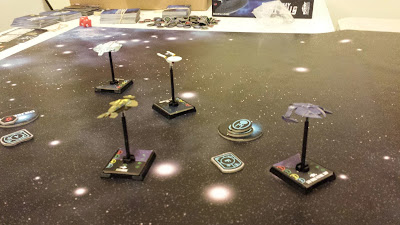 3) Less money: The two games are priced similarly, but as with #2 above, you just don't need that many models to make things interesting. If you're a completist, at most you'll get one of each, but unlike with x-wing, you won't feel the need to by 3-6 of each. So, less of a monetary investment, which of course just means more money spent on other games.

4) More Tactical Options: this, for me, was the clincher. With larger crews, more equipment cards, etc, suddenly that one model on the board is not only more powerful, but more complicated, with far more options.  On the fourth game Fritz and I played, I must have had a little under 20 cards between the 3 models I fielded from the 150 points allotted. And that allowed me to try to put together combos, etc, that went beyond what I'd seen in X-wing. In other words, the game got my brain working more, and that's where the fun is. 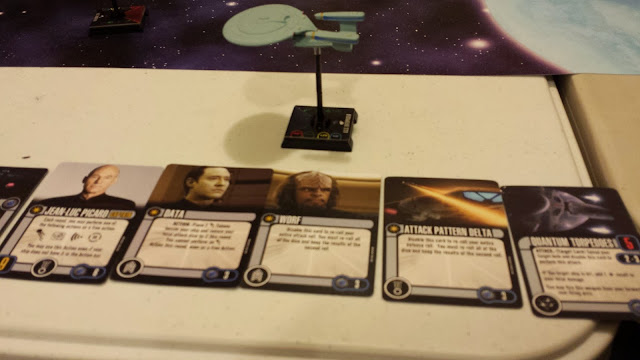 The Downsides to Attack Wing compared to X-Wing:

1) The models are nowhere near as pretty. While both are prepainted, the X-wing models win hands down for presentation.  I'm going to have to put a wash on my models, because some of them are pretty ugly out of the package.

2) Attack Wing is more complicated to set up as the card selection is more robust. To me this is actually a positive, but it will make it harder to jump into for a new players.  For me, this means it will be harder to get the wife into it initially, but I think she'll love it once she has the basics down. This also makes the game a touch longer than X-Wing, but not by a large margin. Still a possible work-night game. 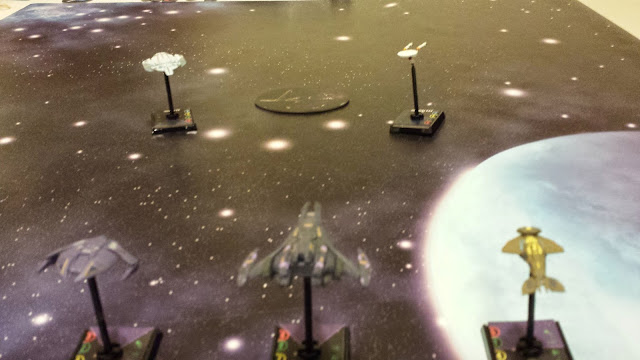 3) Everyone likes Star Wars, not everyone likes Trek, and other than the Enterprise, the ships are less immediately recognizable to people who haven't watched the various shows. Might be harder to find players. 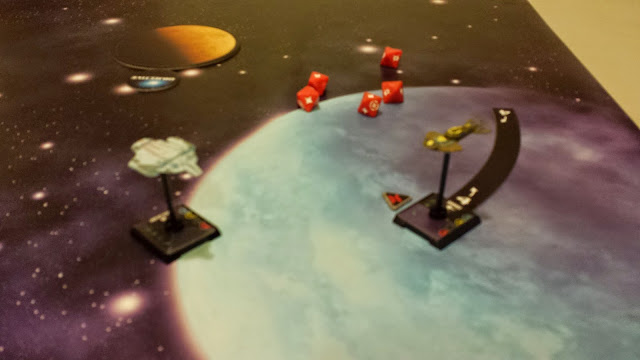 Regardless, the game is just more fun for me.

So, after the four games last night, I walked out of the game store with the Attack Wing starter set and the Defiant and a Cardassian expansion (I had to get Gul Dukat!).  Game on!