Last night, Fritz and I played our first game of Chain of Command: España - the  version of Too Fat Lardies' platoon level skirmish game set in the Spanish Civil War. It was my second game using the rules, so I'm sure I was doing some things wrong (let me know if you see anything).

Below is the board. Yeah, not especially Spanish, I know. I finished painting the figures and I was so jazzed about getting in a game and learning the rules that I jumped the gun a little. Hoping to have more appropriate terrain in the next few weeks. Right now, most of my stuff is geared towards All Quiet on the Martian Front, but I suppose that's what imagination is for.

We streamlined things a bit (didn't use the rules for multiple floors for instance) just to learn, and I put together two even strength platoons and used the limited support I had ready for the table. 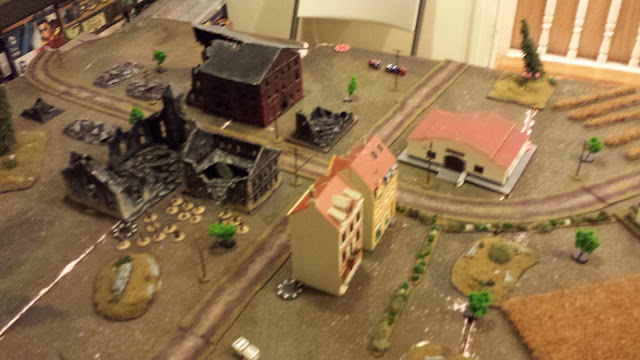 The Nationalists (played by Fritz, my favorite Fascist) were the aggressors, and started out by rolling double sixes on the command dice - two turns in a row. Not actually a great time for that roll as I have nothing on the board for him to shoot at. He deploys a rifle section and they immediately take up position in two of the ruined buildings overlooking the road. 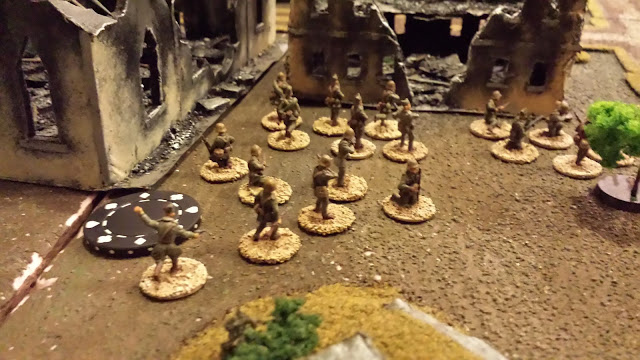 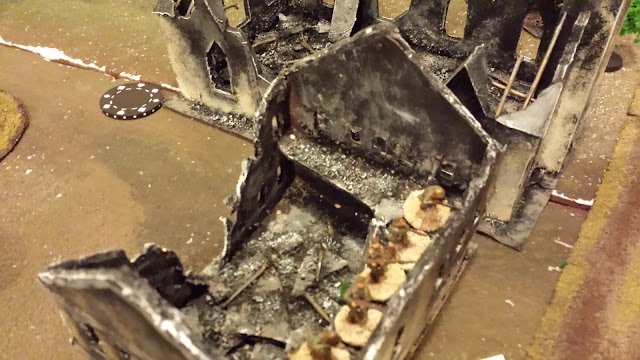 In response, my brave Republicans deploy into the factory directly across the street from them. 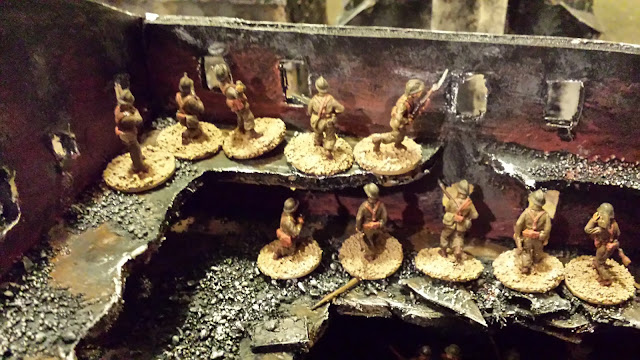 My men are immediately fired upon (Fritz put a team on overwatch), but with no effect. 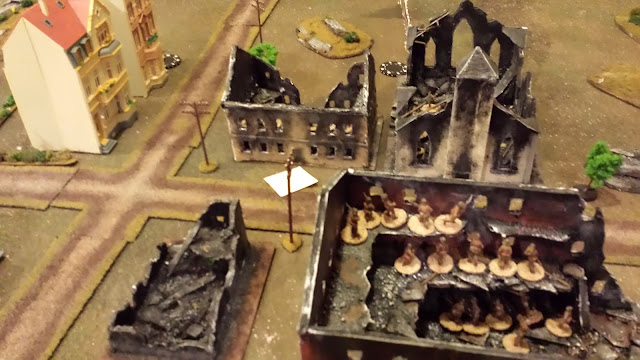 A Republican sniper team takes up position, shooting ineffectually at the Nationalist mortar team behind the hill.  Actually, that sniper hit nothing all game - too much vino on siesta I think. 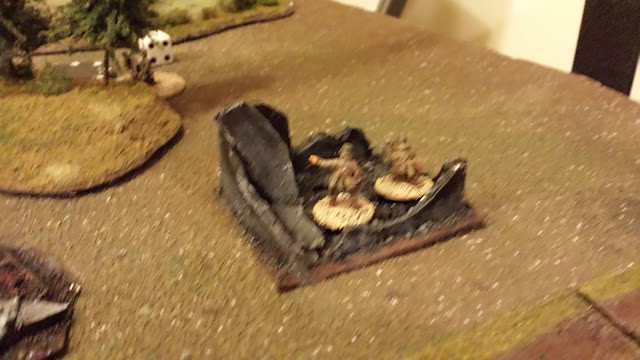 I send a squad out of the factory to try to flank the force in the ruins, but Fritz is able to match the move, deploying his second rifle section to back up the first. A squad moves out of the church and fires causing some heavy casualties and shock to my men. 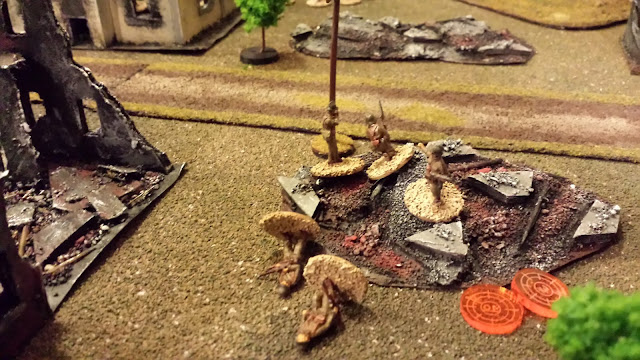 The situation at the center seems likely to turn into a grind, so I decide on a strategy of a grand maneuver. I deploy my other rifle section far to my left, and they start firing at the single team that Fritz has guarding the rear. 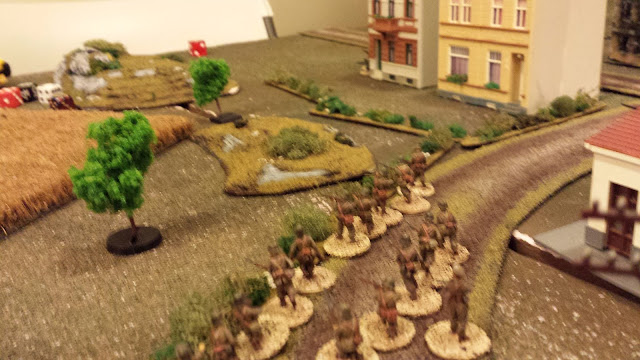 Fritz, his jump off points suddenly threatened, deployed his MMG team to support the LMG team already on the scene. Having just deployed, the MMG shoots with half dice, and does little against the approaching riflemen. 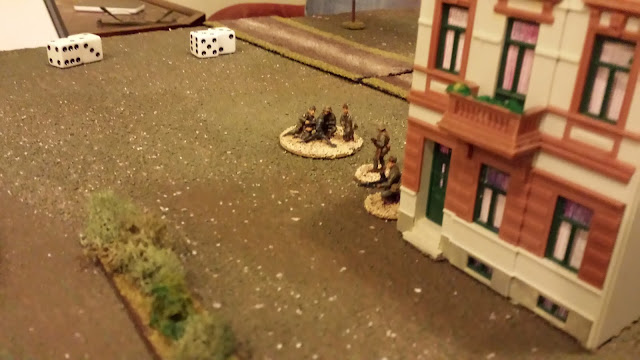 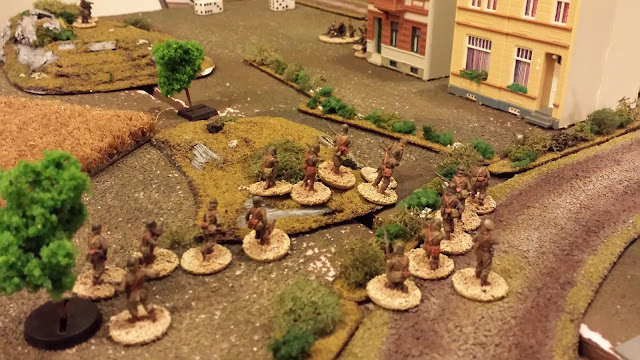 However the weight of numbers is starting to extract a toll on the right. Despite taking cover (tactical stance) in the ruins, the rest of the exposed team is wiped out causing the first drop in force morale. 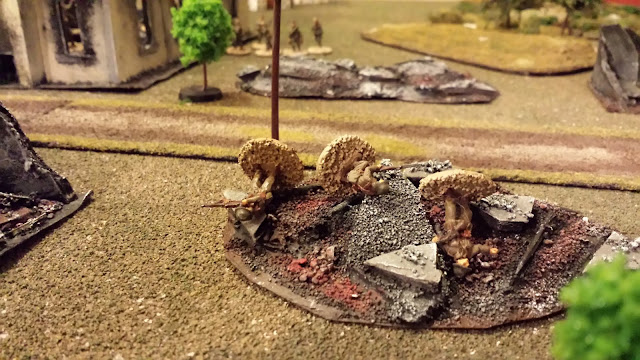 At the same time, the LMG team in the factory is cut down, leaving only the gunner remaining without a loader.  That leaves one intact squad in the building, along with my Teniente (Senior leader) and Section Sargento. This is a really big problem considering they are directly facing almost the entire Nationalist platoon across the street. 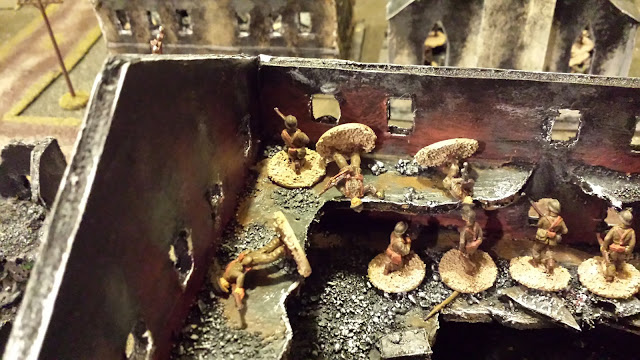 Now it's a race. I need to get my other section around the townhouses and into Fritz's rear before he surges across the street and finishes my men off. I leave the men in the factory to hold the ground, and try to double-time the action on the left. The rifle section cuts down the MMG team before they're able to open up again, but the LMG team remains with two men left. 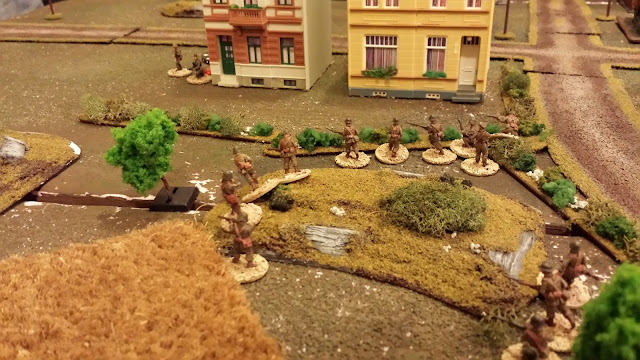 Meanwhile, the LMG team on the right is finished off. Morale takes another hit. The loss of that gunner is made worse by how badly I needed him intact if there's close combat.  I should have moved him back while I had the chance... 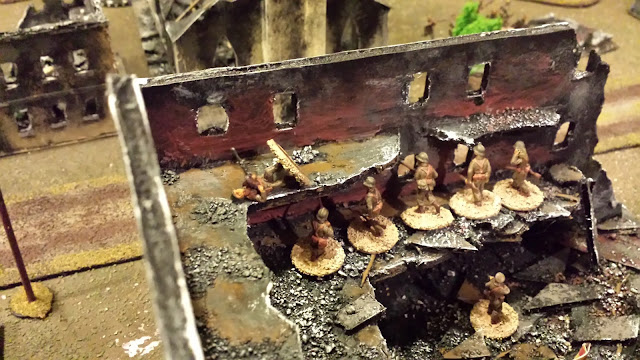 Fritz moves a squad out into the ruins, threatening the remains of the rifle section with the potential to flank them. There's nothing I can do. Everything except a mortar team is on the table, and there's no guarantee I can get them in (my senior leader is on the table, so I have to roll for deployment), even if I had the dice (which I don't). 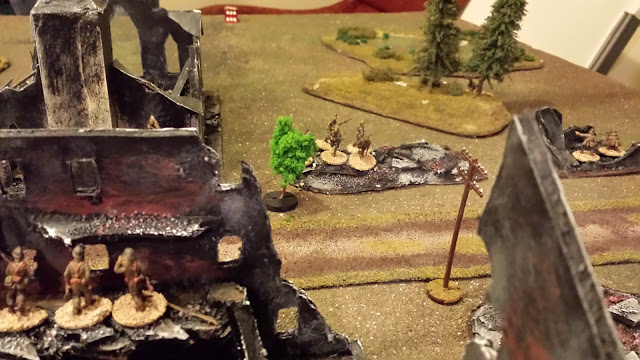 The rifle section on the left continues to advance, slowly moving and shooting, but the LMG is still up, even if there's no loader. He's already broken (he should have been moved back - but we missed that), but he's also in the way and I lost movement killing his loader. Further, Fritz brought his sniper up on the hill. I'm not too worried about that - If I can get around the building I'll be out of line of sight anyway. 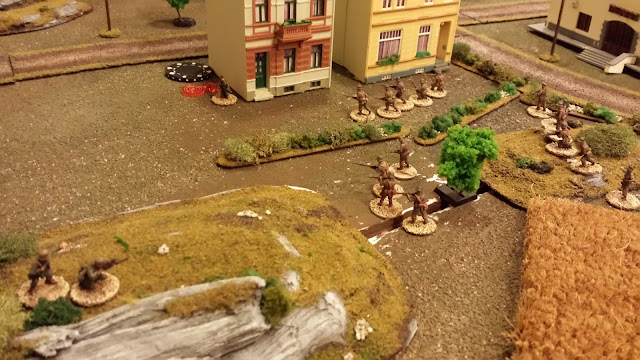 Things are getting flat out desperate on the right. More casualties, including my Section Sargento - more lost morale. There's now only three men standing, plus the Teniente and his flag bearer (counts as a rifleman).  Across the street are two bloodied but largely intact sections of riflemen. We're outnumbered 3 or 4 to 1. 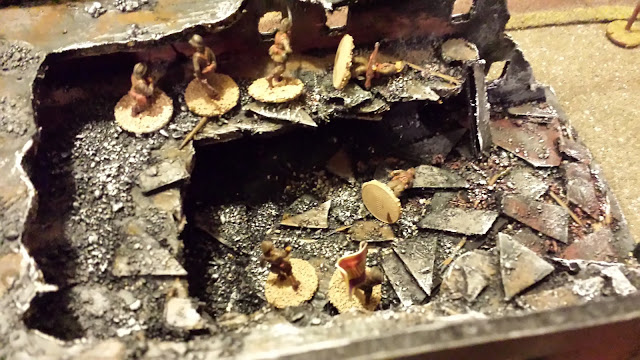 The section on the left finally gets around the corner. One team breaks off and forces the sniper team to withdraw from their position and off the table (sadly this doesn't hurt enemy morale or count as loss of support).  I take a jump off point, which knocks the Nationalist morale down by two.  If I remember correctly, we're both hovering around 6 or 7 at this point (started with 10 each). It hurts, but the initiative passes to Fritz before I can rush my men around to his rear. 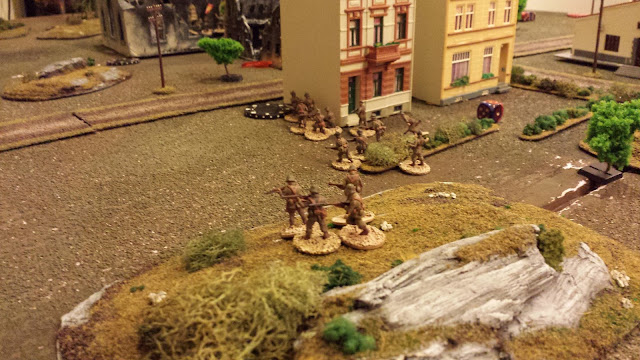 Fritz orders his Nationalists to charge across the street (all of them) leading to two close combats at once. One team rushes my MMG which I'd brought up to support the factory, and the rest surge towards the factory itself. We both know it's the moment of truth, and I'm pretty certain that this is the end for me.

I use my one Chain of Command die to interrupt the turn before they get there and open up on the charging infantry in the open. Sadly, the dice turn on me cruelly, and there's only one casualty. I should have saved it to avoid a force morale check... oh well, live and learn. 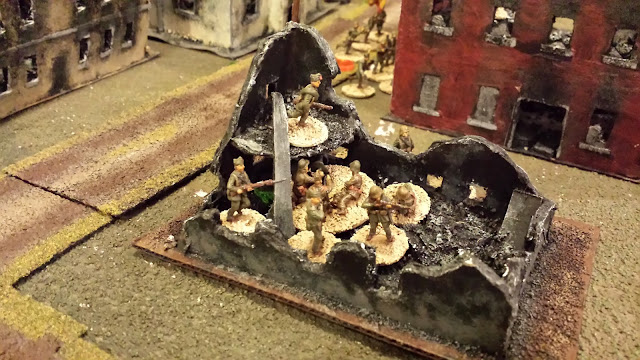 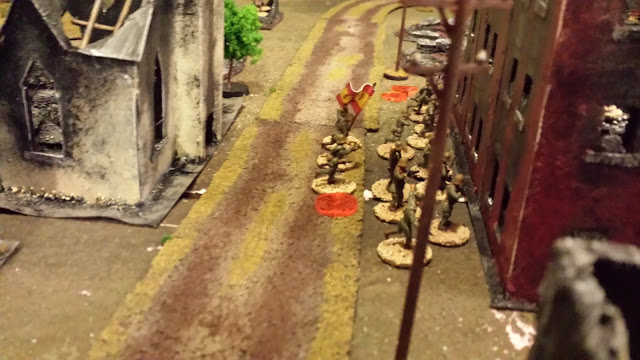 The close combat goes about as well as I expected. Meaning it was a slaughter. Everyone but the Teniente is killed outright, the Teniente himself being wounded and forced to flee the building. 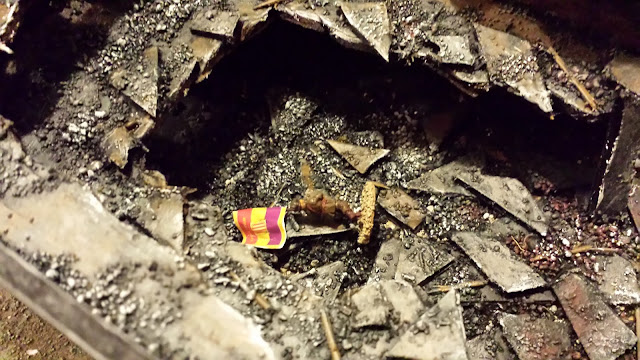 We made the fascists pay for every drop of Republican blood however. Several casualties and shock, plus the Nationalist Teniente was killed in the melee, dropping Fritz's force morale to a 5. Sadly, mine was now a 4 - meaning I lost a command die. Ouch. 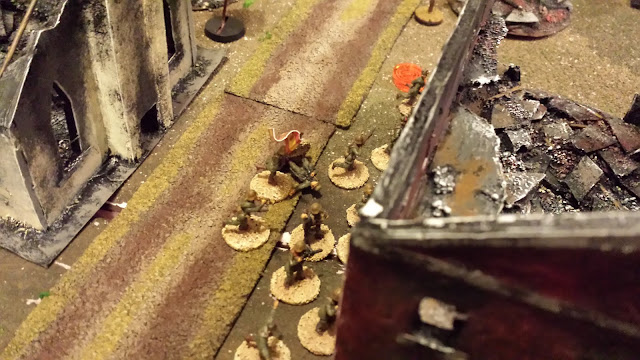 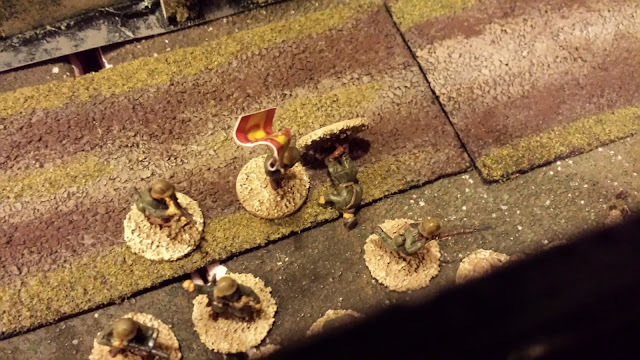 My own leader is alive, bleeding, and running for his life. (Turns out leaders can't rout, but oh well, it's dramatic). 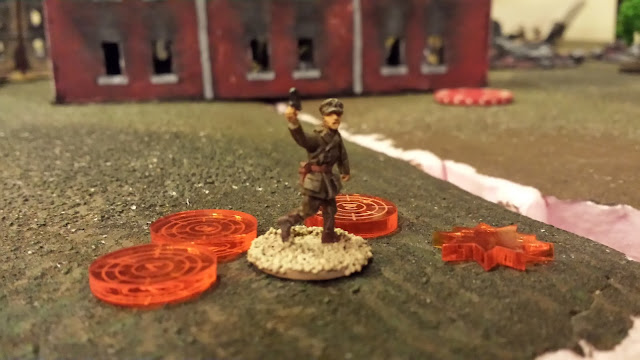 The Nationalist troops, looking to avenge their fallen leader, pour out of the windows, giving chase. They overrun a jump off point, dropping my morale to a pitiful 3 (and losing me another command die). 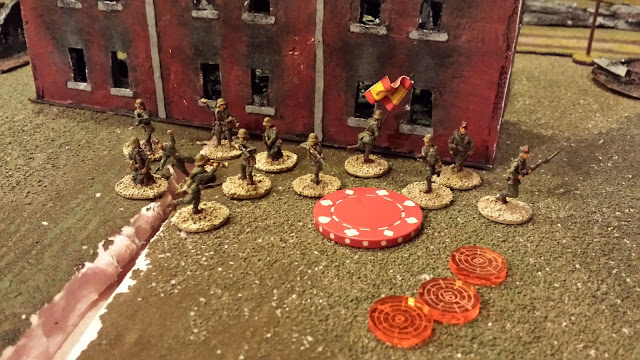 The team which overran the MMG breaks into a sprint to take yet another jump-off point (bringing my morale and command dice to a 2), even though they then take enough shock from the run to effectively pin them. 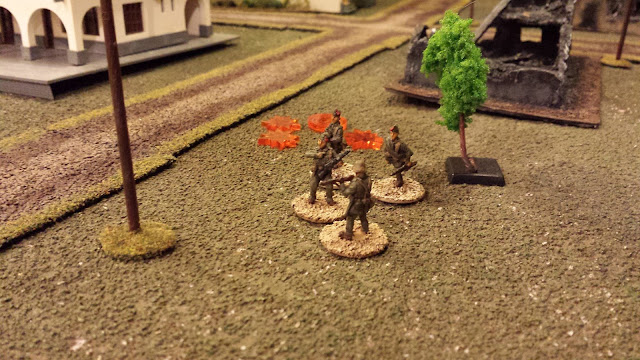 Perhaps refusing to give up, or perhaps unaware of their Teniente's death, the rifle section on the left activates with my single remaining command die and manages to take another Nationalist jump-off point. My hopes to similarly reduce their command dice are dashed when Fritz uses a Chain of Command dice to avoid the morale check. 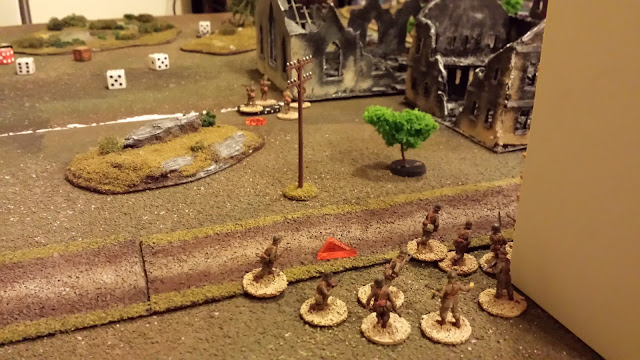 Meanwhile the Nationalists pin down my fleeing Teniente in the open field but can't seem to close the deal. They call in a mortar shot which finally frags him.  All Spain mourns for you, Teniente! 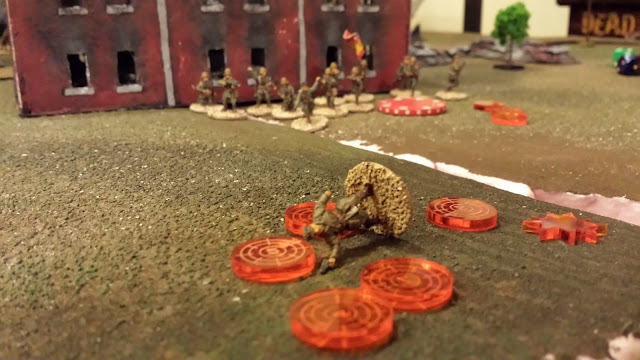 A fun and very intense game, despite still having to look up lots of rules. I'm looking forward to playing again soon, perhaps with some more appropriate terrain!