While Tritchel was attacking Panther Burn and paying the ultimate price, Colonel O'Malley, defending the northern most part of the Mississippi Delta, prepared to spring a trap. If he could lure the Martians into the built up areas around the town of Drew, he might finally be able to trap them and finish them off...

Bill writes:
"Azog was ready. The few reinforcements had given him enough strength to attack the humans again. A large force of human tanks was heading for him. The entire Martian force in the north moved out to meet them. 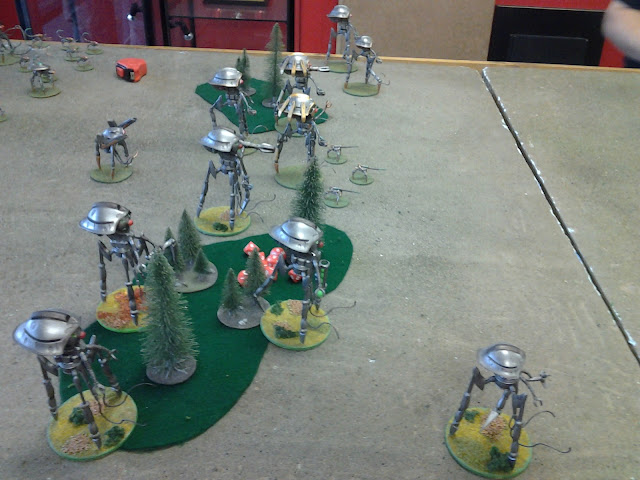 Colonel O'Malley was satisfied. They had taken the bait. Leaving a rearguard of two
companies behind,  he took the rest and headed back to Drew. Hopefully the martians would get bloodied,  and the rearguard wouldn't get hurt too badly.

The martians reached the human position. The scientist, controllers, and drones were left in the rear. They couldn't be risked in this skirmish. They would all be needed at the human town. The remaining tripods advanced steadily towards the waiting humans. The grenadier lobbed ranging shots that just missed. The veteran tripods fire and kill two tanks. One woods catch fire.

Finally the Martians are in range. Lots of fire for no results. Only one point of damage to a scout. The fall back begins. A scout and assault tripod are damaged. Martian fire is ineffective,  but the advance continues, keeping the pressure on. Now both woods are on fire, one is now raging. 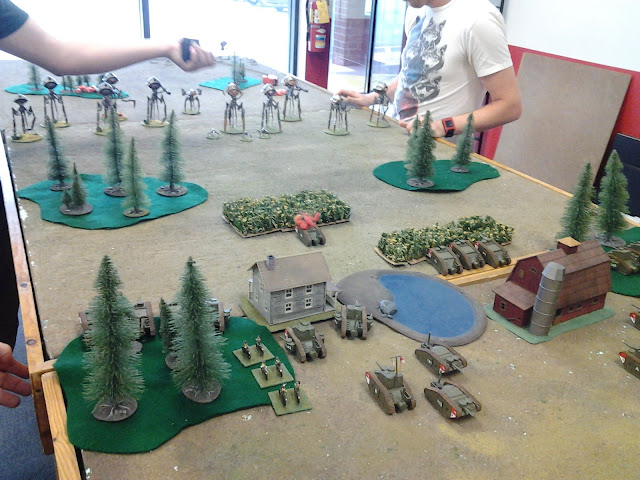 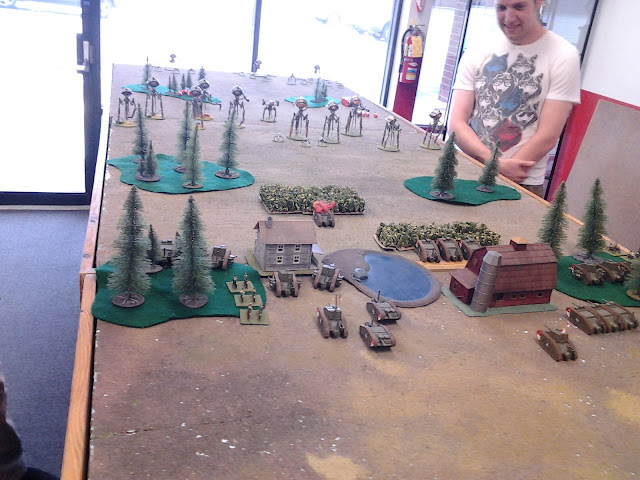 Azog has no idea why the scout tried to move through the burning woods. Now, knocked over by falling trees and trapped underneath them, the screams are horrifying as the Martian inside is baked alive. Martian fire kills 4 more tanks. Human fire does only scattered damage.

Seeing the tripod crash and burn was great,  but now it's time to go. All human unit start to withdraw as fast as they can. The artillery targets the grenadier,  damaging it. 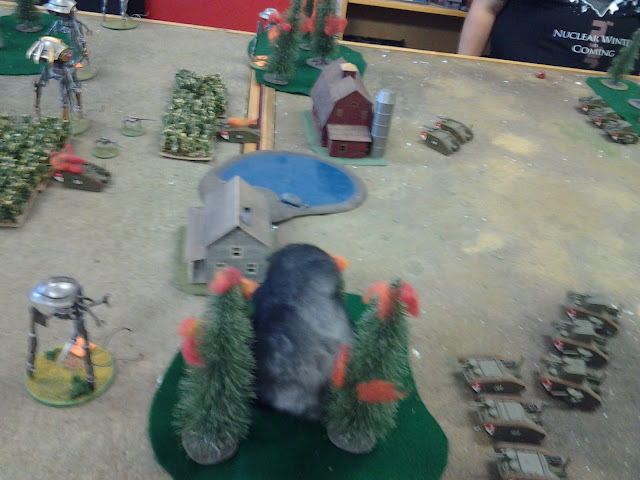 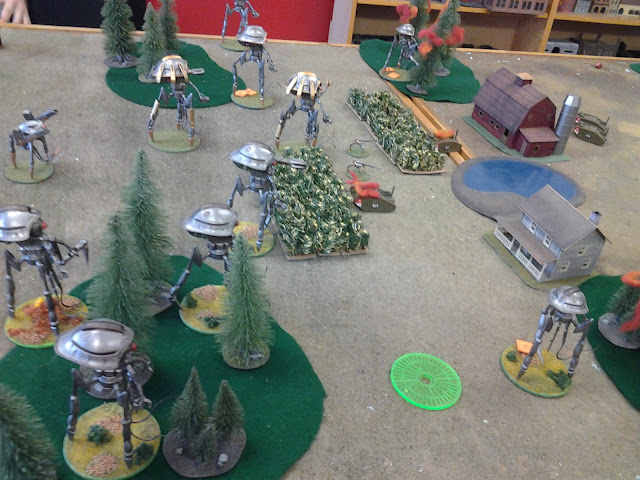 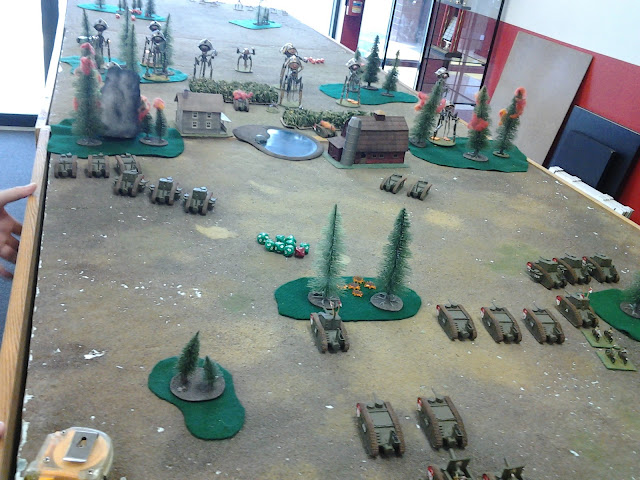 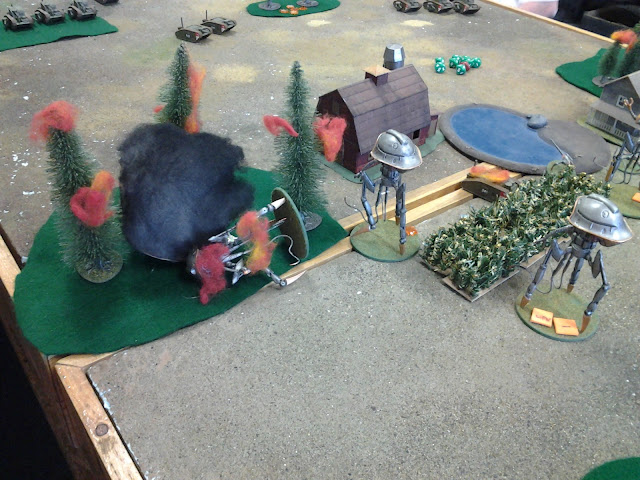 One assault tripod pushes forward and kills a command tank. Azog kills another.
The human artillery damages the grenadier again. Everything else targets the assault tripod and it blows up. 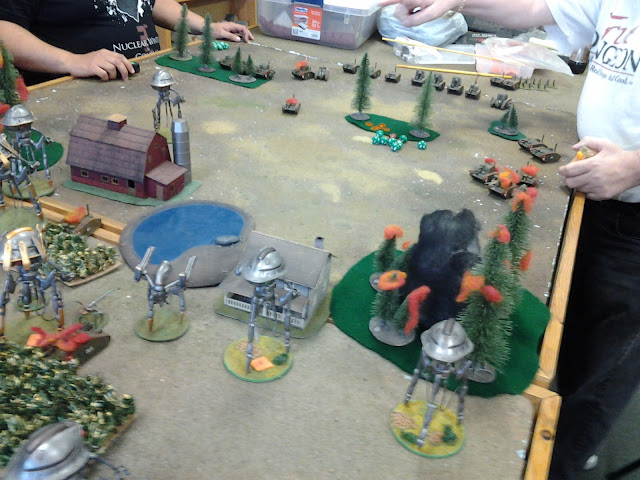 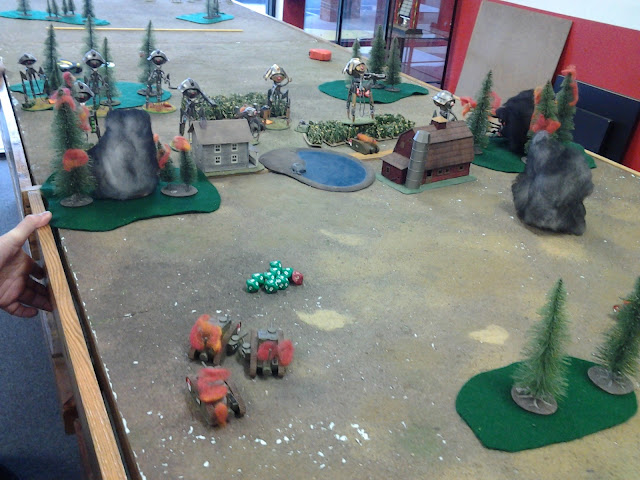 The human withdrawel is complete. They have lost a command tank, 2 MK 3's, 4 MK 2's, and a rough rider stand. The Martians lose a scout, an assault tripod, and suffer minor damage to 4 other tripods.

Azog decides to pause just long enough to repair the small amount damage. The attack will continue. The humans are waiting for him and no longer running away. It is time to finish them off.

Colonel O'Malley had done everything he could. The Martians were coming with everything they had. One way or another,  the battle at the small town of Drew would decide the fighting in the north. The dug in infantry and artillery would  pin them in place, and the massed tanks would sweep in and hit them in the flank.
The Colonel hoped it would work and bring victory for the Americans."
Posted by Unknown at 9:55 AM