It's always great to meet new gaming buddies. This past week I met up with Michael and Matt and the three of us played a game of Cold War Commander.  Michael was a great host and set up an interesting game for us. 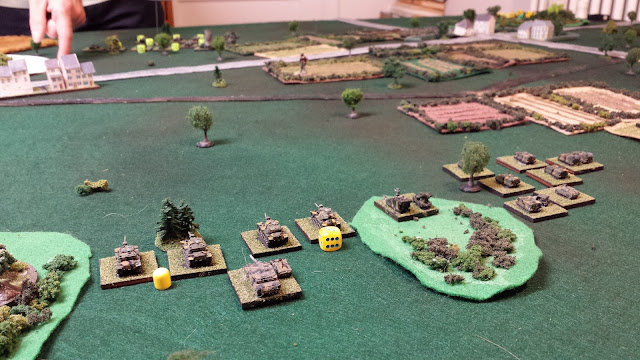 "The United States has deployed it's crack National Guard units to fill holes in their lines. The 1/69 is being rushed to the front as we speak. Losses have been extraordinary, but the US war planners anticipated such losses after studying the Arab Israeli conflicts. They therefore, feel completely confident in the ability of the equipment being fielded by the National Guard units. Of course no one on the ground asked the Private or the Sergeant how they feel about rushing into a modern battle inside a M113 with only M60 support, and not the sexy M60a3s.

The only hope is the Soviets are also experiencing the pains of war.....

The US will field 2 Infantry companies and 2 tank companies. Battalion has also assigned AA, artillery and air assets to support the move.  S2 does not anticipate enemy in the area of operations [AO]. The move to the front should not encounter any opposition."

Matt and I split the Americans while Michael commanded the Soviets. Matt and I had a tank company and infantry company apiece, and split some other assets (mobile mortars, Forward Air Observers, etc, between us) 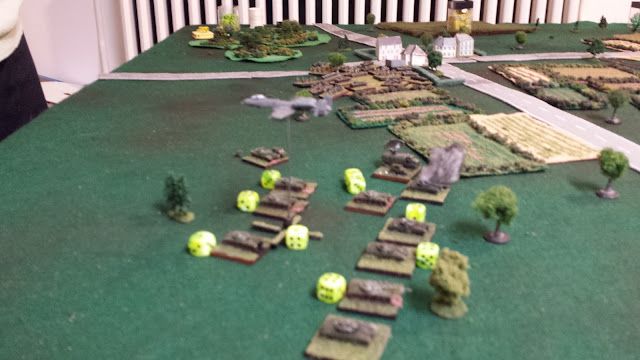 The other Soviet forces, including all of their infantry, took a solid position in cover within the town. While it kept them relatively safe, they also got rather bogged down there. 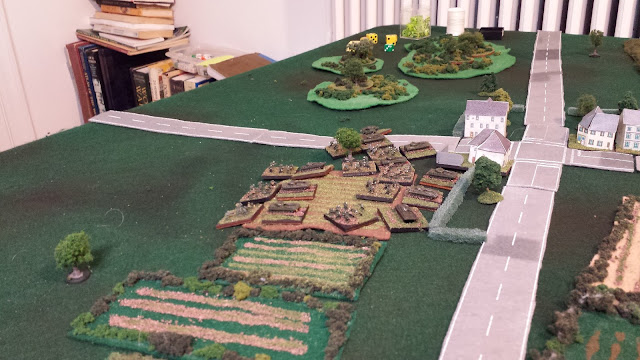 Matt's Americans attempt to move up the road under fire from the town. 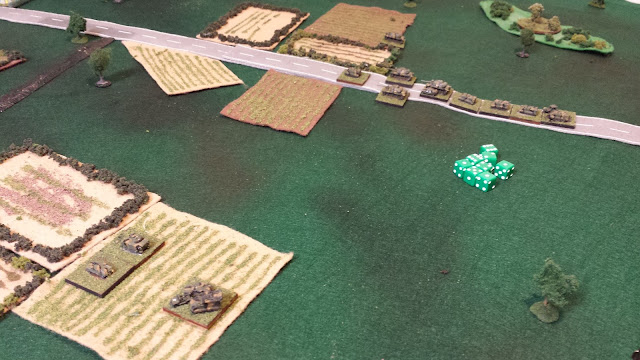 Fire is exchanged, and the Soviet forces peeking out are destroyed, but most of them are well out of line of sight. 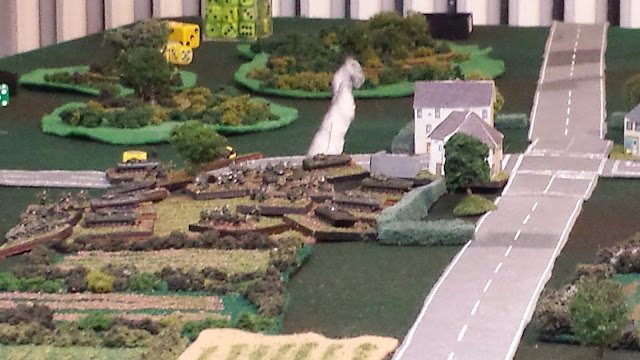 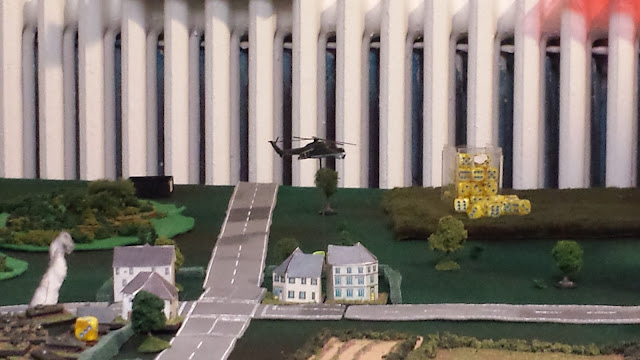 Meanwhile I try to advance my infantry inside their carriers, only to have them torn apart by opportunity fire from the Soviet tanks. Each of these counts as two kills and suddenly I'm worried about my force's break point. 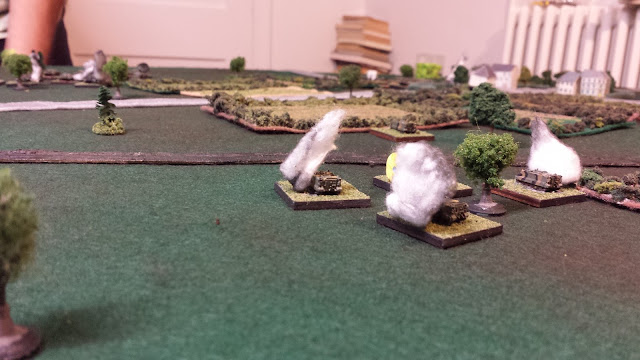 However my tank force performs much better. Between attacks on their own turn and opportunity fire, my tank company has managed to decimate their Soviet counterparts while avoiding any kills themselves. Keep at 'em boys! 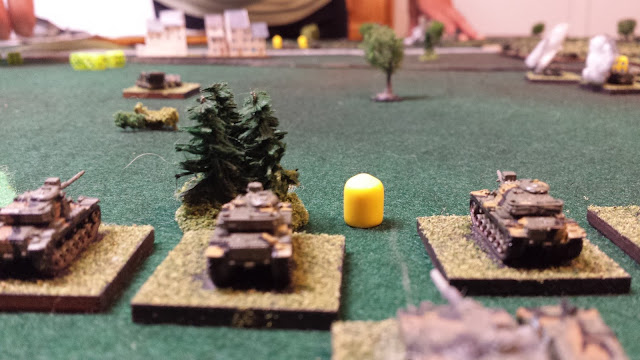 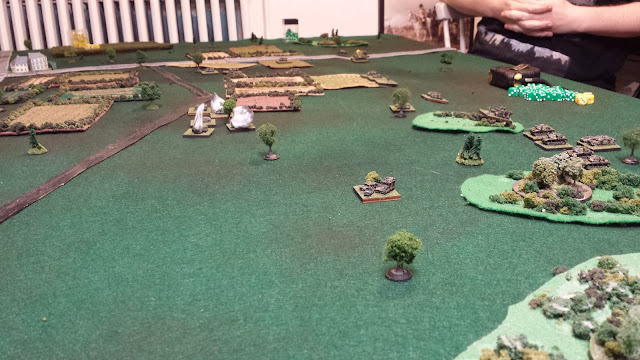 The Soviet tank I've been firing at has seen better days. 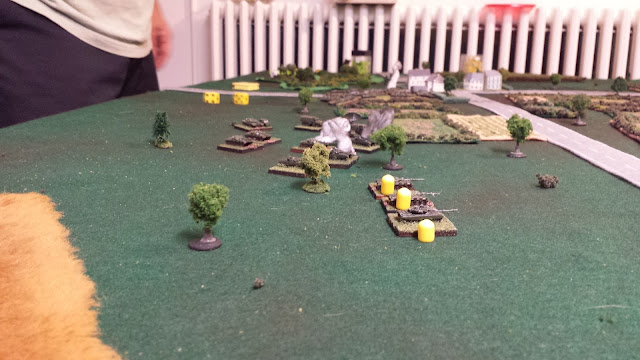 There are only a few platoons left. 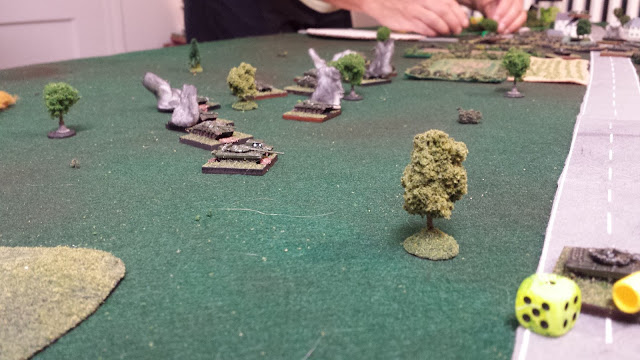 We attempt several times to use our air support to dislodge the town's defenders, but our luck hasn't been enough and most of the attacks go wide. There are some hits, and the score is very close. 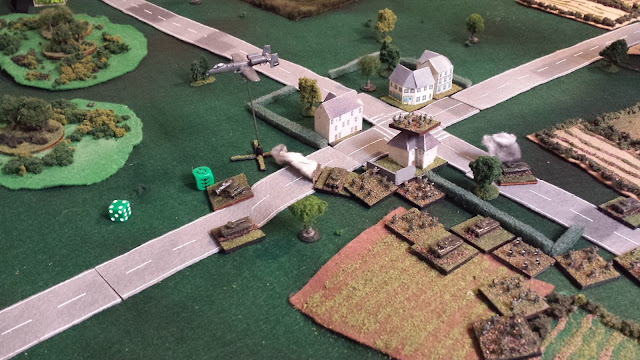 Sadly, I had to leave a bit early due to work the next morning, so I didn't see the endgame. I'm told that neither side managed to break the other, but they called it a Soviet victory by a slight margin.

This was my first time playing CWC, and it was very fun. I like the combined arms aspect in particular. 6mm is a bit smaller than I'm used to, and there's a lot of abstraction (1 stand = platoon), but everything worked when it was on the table. I'd definitely play again, and anyway was glad to meet some new people to game with.
Posted by Unknown at 12:22 PM