Why Game the Spanish Civil War?

I just finished painting my SCW platoons (Minairons miniatures) and am getting ready for my first full game of Chain of Command: España tonight, and it got me thinking about why I wanted to play such a relatively obscure period to begin with.

When I mention the Spanish Civil War to most people (Americans anyway), I usually get a blank look followed by "that's the one with Teddy Roosevelt, Rough Riders, and San Juan Hill, right?"  It's understandable, given I don't recall the Spanish Civil War being covered at all in history class, unlike the Spanish-American War which everyone is confusing it with.

So what this post is about - other than showing off my new miniatures - is answering the question: Why Game the Spanish Civil War?  Aka, why should I care?  It's not a particularly popular period, certainly it has nothing on WWII, the Napoleonic Wars, or Warhammer 40K when it comes to available games, but there are still a fair amount of people who play it, and I imagine each of them have their own reasons.


I've heard other people talk about the war as the prelude to WWII, and expressed interest in playing with the early versions of tanks like the German Panzer I, or the Russian T-26. Others like the challenge of painting the diverse forces and factions of the early years of the war. I have to admit, I don't really care about weapons. Show me a historical building and I'm more interested in why it was built and now the tools the men used to build it.  When it comes to war, I'm far more interested in the reasons people had to fight than the type of gun they carried. 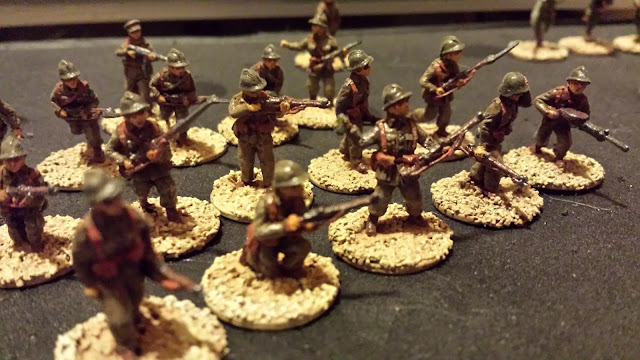 For me, it's the fact that this war was primarily an ideological conflict, and it rarely cleaved along regional lines, like our American Civil War. Nor was it primarily a religious war, although religion (and to a limited degree, regionalism) certainly played into it.


Neither side was necessarily on the side of the angels, but I know where my own sympathies lie. Spain in the 30s was long past its heyday, a virtual backwater in Europe. Liberal republicanism was slow to take root on the Iberian Peninsula, and when it did come, it was more chaotic than less absolutist cultures.

The second republic was proclaimed in 1931, with countless parties and the chaos of loose coalitions in the government. Leftist parties sought to move away from the old order, where aristocratic landowners and the Catholic church dominated the political and economic life of the country. The new constitution stripped the aristocracy and the Catholic Church of it's traditional privileges. Right wing groups saw themselves as protecting the "True Spain", forever Catholic and conservative, from a Communist revolution.  One thing that both sides had in common was the belief that their problems could be solved with violence.


In 1936, a Popular Front government won a crucial election that was interpreted by both sides as being a turning point for Spain. The victorious left wing parties saw it as a victory for their varying (and often contradictory) agendas, and the right wing saw it (perhaps correctly) as the beginning of a socialist or communist revolution. Violence began immediately. In some areas, churches were burned and priests executed. In others, like Madrid in July, the Falange (a fascist party on the Italian model) murdered a police officer that was also a member of the socialist party. But the civil war wouldn't get going until the army itself got involved.


The army, like the police, was not an ideological monolith. Many officers stayed loyal to the new government, while others fell in with General Mola, who organized a country-wide coup d'etat in the summer of 1936. The 'rebels' did not do so well initially, partially because those troops most loyal to their ideals were stationed in colonial Morocco. It took time to ferry them over, and in that time, the leftist government had disbanded the continental army and released arms to the people.  Due to the armed populace which in most cities supported the new government, the rebellions was nearly squashed. 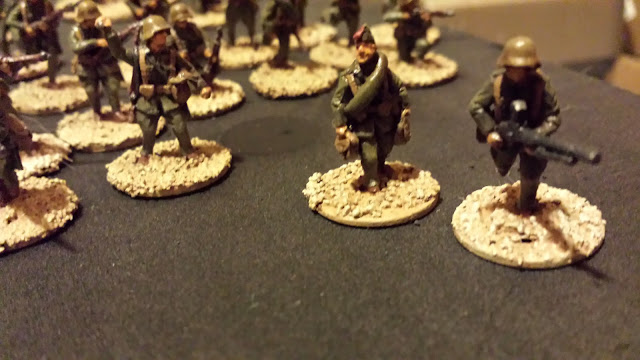 But there was intervention from without.  The right-wing rebels found support among the other fascist states. Hitler quickly sent transport planes to ferry troops from Morocco, and Mussolini sent a strong force of "volunteers" and equipment. With the troops from Morocco would come General Francisco Franco, who would in a few months rise to become the leader of the Nationalist faction with the support of Germany and Italy.


To support the legitimately elected Republic the democracies sent... nothing. Nothing except an "Non-Intervention Agreement" brokered by Britain but ignored by Germany and Italy immediately after signing it. The democracies agreed not to support either side, but the fascists sent supplies and manpower unobstructed for the duration of the war.

This was a time it's easy to forget even existed, before the "Good vs. Evil" narratives through which we usually see WWII. It was an uncomfortable period where those in power (especially in Britain and the US) were more comfortable dealing with fascists than a leftist republic. A time where Henry Ford received a metal from Hitler (and American business was permitted to sell oil to the Nationalists only) and when many in Britain doubted with Oswald Mosely whether democracy really was the best form of government for all people at all times, and whether a government along the new German model may not be better for the Empire.

Only two powers supported the forces of the Republic: Mexico (which could do little) and the Soviet Union. The latter was the principal source of material for the Republic, although it came with a steep price. First, the entire gold reserves of the republic, the fourth largest in the world at the time. Second, it came with strings in the form of political commissars, advisors, and constant pressure to squash ideologies not consistent with Stalinist Communism. Strings that would gradually pull the Republic closer into the Soviet orbit than it might otherwise have gone (the Communist party of Spain was relatively small at the outbreak of the war, but would gain in strength as it progressed thanks to Soviet aid.)


Disgusted with non-Intervention, thousands of men and women from the democratic parts of the world traveled to Spain to join the International Brigades. Moved to action by their ideology, be it Communist, Anarchist, Socialist, or merely anti-Fascist, they are probably the most famous part of the struggle. A young reporter, Ernest Hemingway, was on hand to document the Republican side of things. Another young man, George Orwell, fought with a militia unit and found himself nearly a victim of the Communist purges. Both left a record, but it's Orwell's Homage to Catalonia that moved me most. I can't help but sympathize with the narrative of these men who fought against fascist tyranny, defending their elected government against a military coup.


Of course, as I said, the Republicans were far from angelic. After the election, and moreso after the coup, there was indeed a "red terror". Hundreds of churches were burned, clerics murdered or assaulted, land collectivized, property destroyed, vengence taken,  and countless arrested without charge, with many executed.  To the rebels, soon to be called "Nationalists", their fight was for Spanish, European, or Christian civilization. It wasn't merely the army and the clergy, but rural people, workers, and many others who flocked to their banners, many believing that this electoral victory was merely the first stage in a Communist style revolution. Whatever they believed, they believed it just as surely as the Republicans. 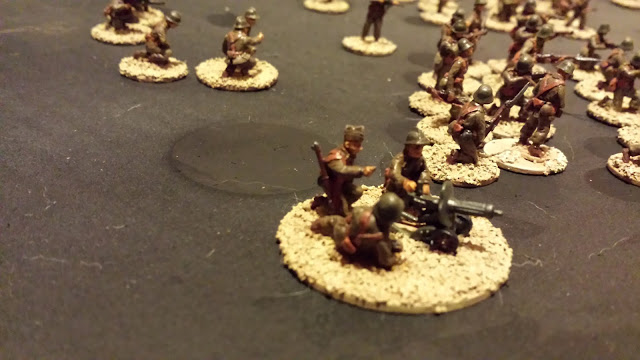 Perhaps the Nationalists were more unified in their ideology, as seems to me often the case when there's a split between the left and right. The left, initially a wide coalition with radically different ideas about the new direction of Spain, was forced more and more into the Communist camp, into totalitarianism on the Russian model. Once need only read Orwell to see that things were far from politically monolithic in the Republic. 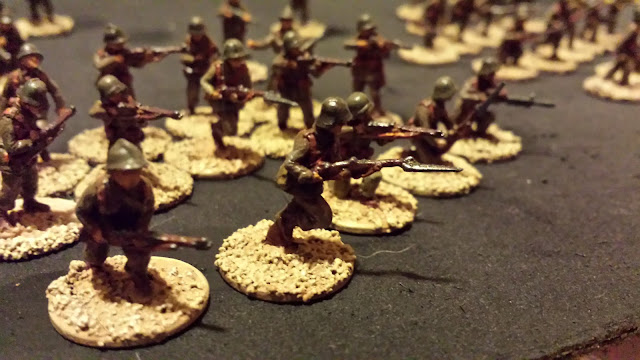 Clearly, my sympathies are primarily with the Republicans and in particular the young ideologues which flocked to Spain in defiance of the laws of their homelands to fight against fascist repression. Certainly there's something about a "lost cause" that makes it easy to idealize (Spoiler: the Nationalists won). Yet I can very clearly see the Nationalist perspective, and the deep desire to defend one's culture and homeland.  And in that very ambiguity, within those mixed feelings, is the reason I'm drawn to this conflict which is so often overshadowed by what came after.  The Spanish Civil War took placed in a vanished time, before the certainties of World War Two's moral struggle came into clear focus.  Looking back, WWII seems inevitable, as if it couldn't have happened differently. But we have to wonder about the what-ifs.  Not just "what if the Republic had won", but what if the villainy which the International Volunteers (and Winston Churchill) saw in the fascist regimes was more generally realized before Hitler began his war?

I read a story about a member of the Abraham Lincoln Brigade (as the American Volunteers termed themselves) who in WWII found himself blacklisted for promotion due to his connection to the "reds". He was said to be a "premature anti-fascist".  How would the world have been different if there were more like him?

I hope you enjoyed the above. All of the models are Minairons 1/72, which is a beautiful line of figures, probably the best castings I've ever come across in any scale. I'll hopefully post my first battle report soon, using the Chain of Command: España rules.

In the meantime, I offer you two very different views on the war. One is a song by a British folk band "Na-Mara" which released an album relating to the war. This song is inspired by International Brigade veteran George Wheeler and his book "To Make the People Smile Again", and is probably what gave me the emotional impetus to look into the war more fully.

The second is an article on the war very much from the Nationalist perspective (on a right-wing website). As I said, there are strong feelings on both sides.