Oh, All Quiet on the Martian Front, how I've missed thee. 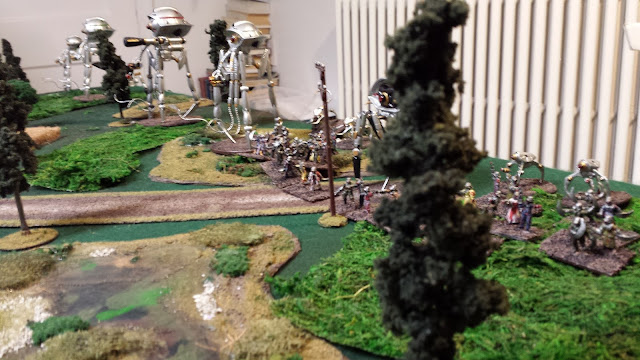 I've been meaning to introduce Michael to AQMF for about a year, and the time has finally come. As usual, the humans are the popular choice, and so I'll be playing the Martians.  Michael is an experienced gamer, and AQMF is very simple, so while I'm keeping the points down (well, 1500 isn't so much is it?), we're playing with enough meat for a solid game.

The scenario is a mix of two others I've played, with several objectives worth a number of points, and when either side breaks (loses half the total units), the game ends and the points are totaled up.

Humans: for each of the two depots remaining at the end of the game, 2 points, and if they prevent any Martian unit from crossing the railroad tracks and entering Greenwood, another point.

Martians: for each of the two depots destroyed, 2 points, and if they kill both human command units, another point.
Whichever side breaks the other gets an additional point.

It begins, and the Martians deploy first. I chose both forces in advance to save time, and a sensible force somewhat took a back seat to variety for demonstration purposes. 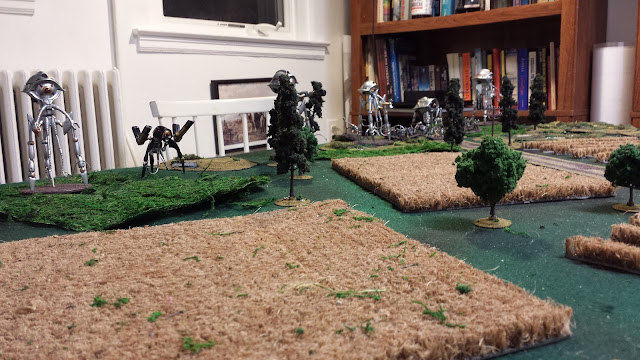 Although completely inappropriate for the scenario (crossing a long board under artillery fire) I wanted to get some drones on the table, as well as lobototons.  Otherwise I took three assault tripods (one with dust), a grenadier, and two scouts. 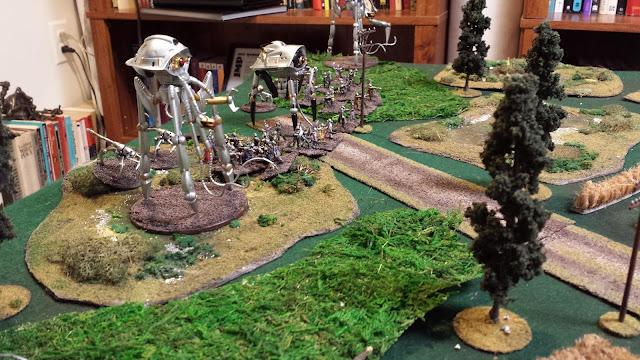 I gave my human opponent a variety of troops and plenty of tanks. As usual, a larger number of weaker human units vs. strong but fewer Martians.  Once Michael had deployed, his neighbor wandered in, and ended up taking over the left flank. 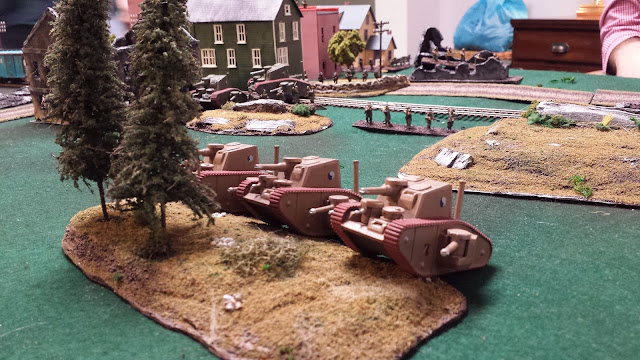 The humans got three entrenchments, and placed the depots after deployment. They had the option to deploy on up to half the table, but with the exception of a unit of MKIII tanks and some infantry, they stayed well back behind the tracks. 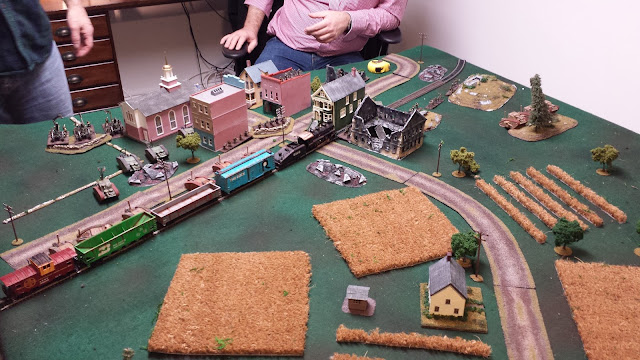 With much of the Mississippi Delta lost to the Martians, Greenwood has become the US Army's front line in the State, at the edge of the swampy delta and the beginning of a plateau of firm ground, more suitable to Tripod movement. The town's supply depots feed defenders for miles around and must be held. 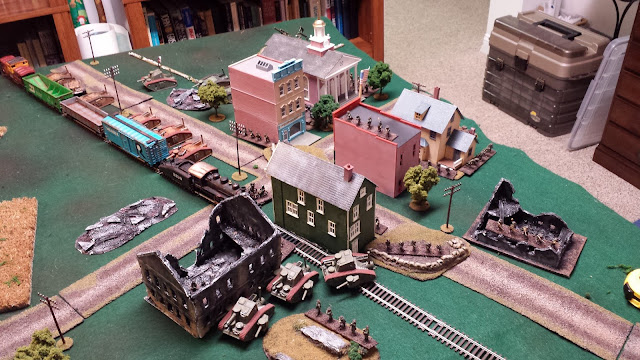 Heavy Howitzers get a free shot before the first initiative roll, and boy did they make it count. We attributed it to beginner's luck, as Michael's neighbor (whose name escapes me - sorry!) rolled the dice. The Slaver took a direct hit and crumpled to the ground, destroyed. In the first shot of the game, I lost not only a tripod, but all of my infantry, as they can't move without it. Ouch! 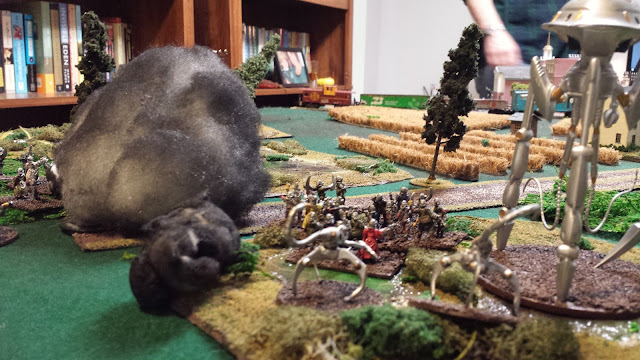 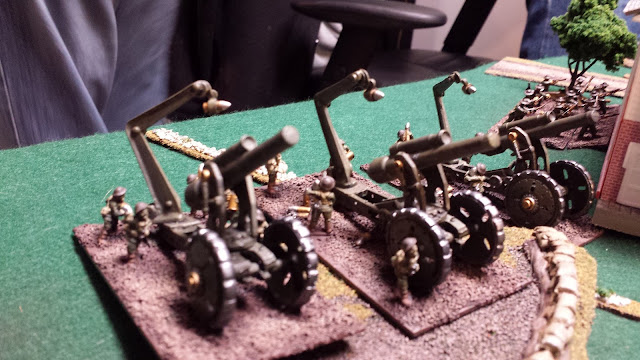 The return fire was at long range, but started picking apart the better tanks. Without the slaver, my main approach would be along that corridor. 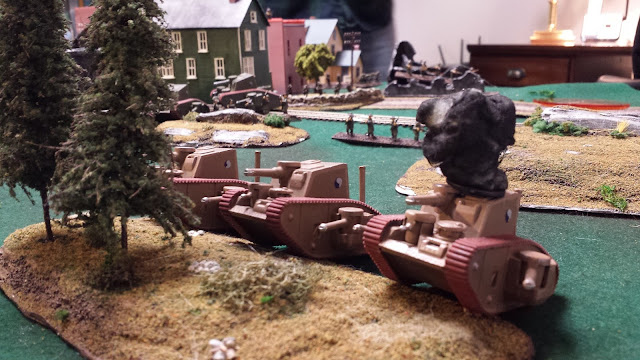 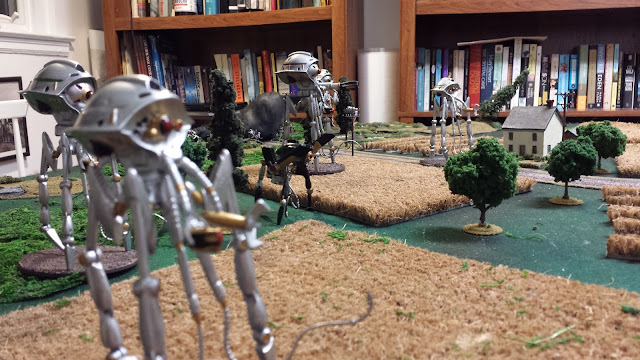 Another nasty hit, this time on the Grenadier, damaging it's motive systems. Thankfully, it was close enough by this point that I was able to leave it immobile the rest of the game, and still have it shoot. 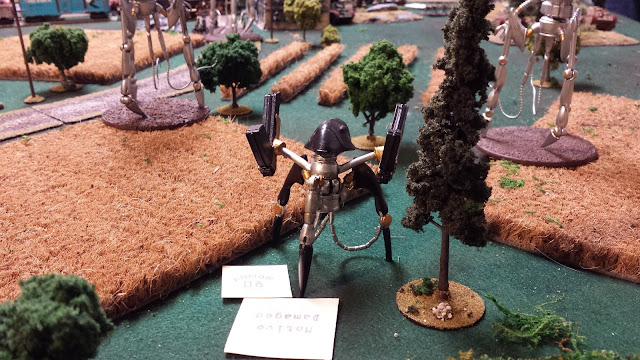 As the tripods approached, the rough riders came out to play, immobilizing a scout. 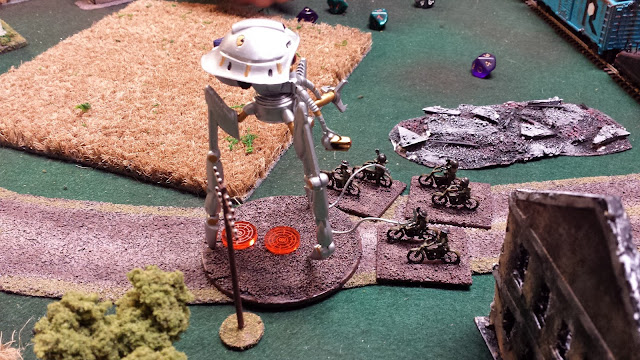 Not willing to let the opportunity go to waste, three MKIIs open upon the scout, firing through their own motorcyclists! 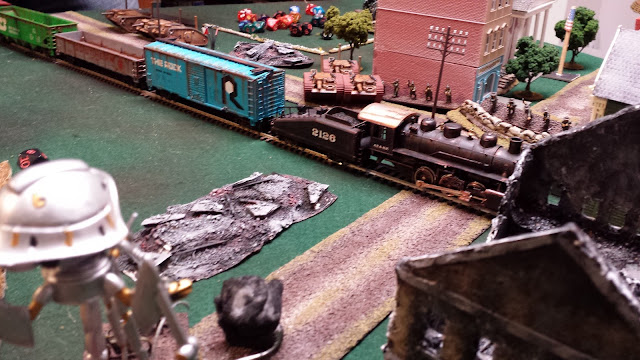 The rough riders are decimated by the friendly fire, which also hits the tripod... 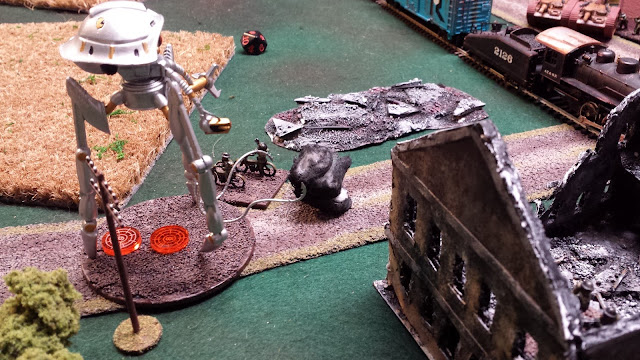 Which explodes, finishing off the rough riders. 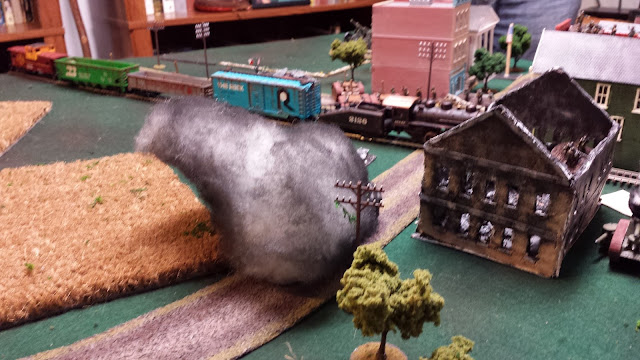 An assault tripod follows closely behind, trying to line up shots against the human leaders or the depots. 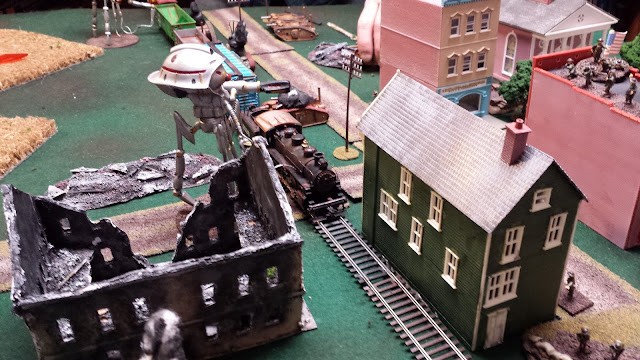 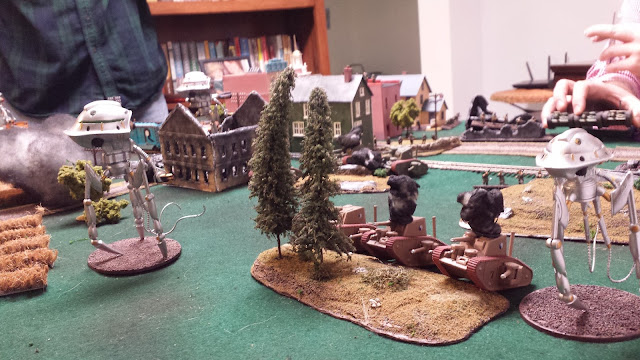 An assault tripod destroys the human command tank. The Americans wisely pull their other command unit back to the rear. 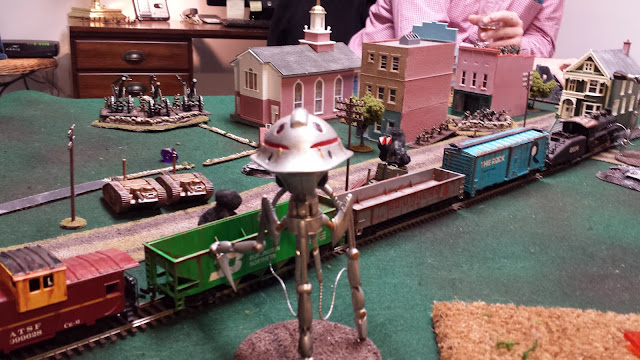 However, the lucky shots continue!  There were several "one-shotted" tripods this game, a rarity in AQMF, although it does happen. 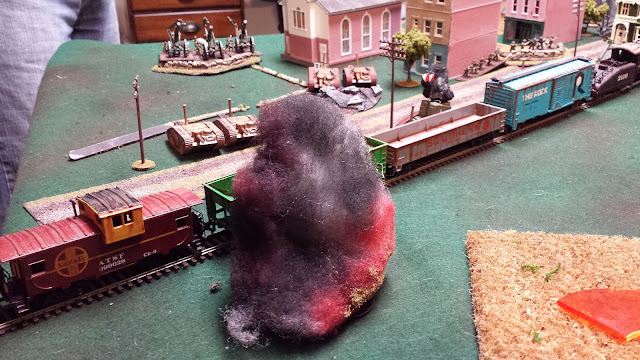 However, the last defenders on the right flank have been destroyed, and the way is now open into Greenwood. 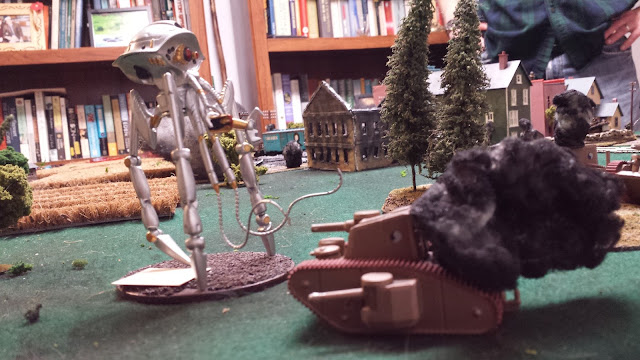 However, the Martian numbers are rapidly dwindling. Smoking pillars of burning tripods litter the approach to the town. One tripod has now crossed the tracks into the town itself, denying the humans that victory point. 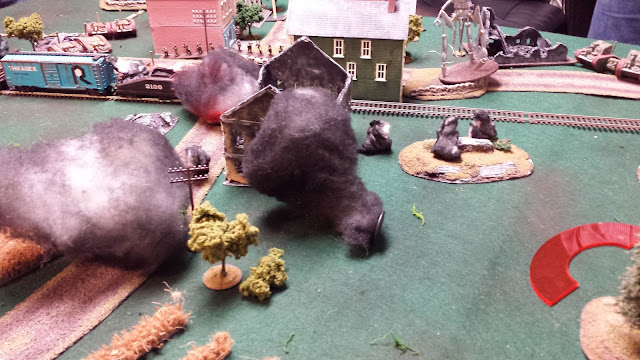 Using Industrial Might, reinforcements are called in. But is it too late? 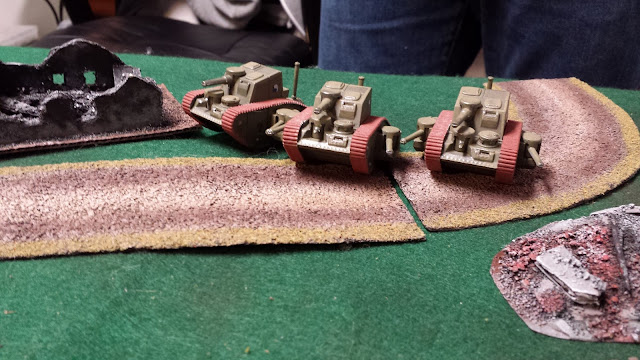 The undamaged tripod strides over American fortifications and lines up a shot against one of the depots, destroying it. One more to go... 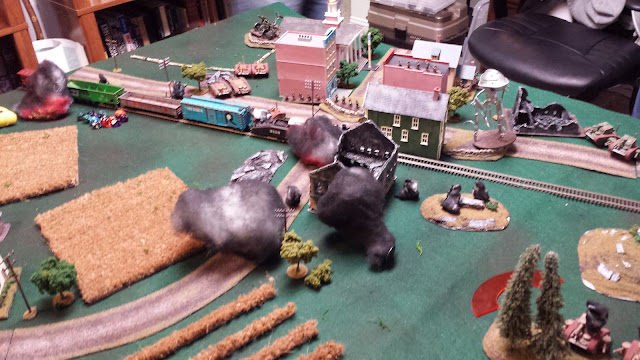 With the Martians only one unit from their break point, the American artillery starts trying to pick off the immobile drones. While drones are killed, no complete unit is eliminated. 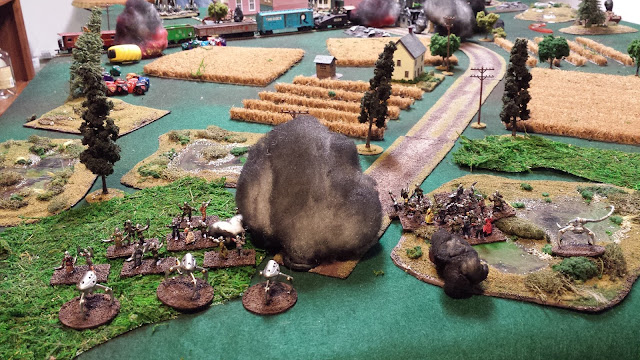 The last turn... both sides sitting at the edge of victory, both one unit away from defeat, the last turn sees the Martians seizing the initiative. Michael's face tells me that he knows he's going to lose.  However, I have only two units in range to really do anything, an undamaged assault tripod and a heavily damaged scout.  I move both up, the scout to try to take out the last unit, the assault tripod taking a shot at the last depot. Both miss!

The humans get their go after all, and concentrating their fire on the damaged scout, bring it down. With one depot surviving, one destroyed, and neither secondary objectives met, the point for breaking the enemy puts the humans over the edge, granting them a narrow victory.

A great close game, and a great reminder of why I love this game so much. 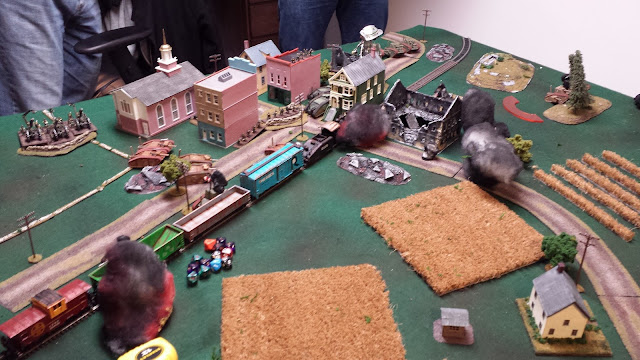