Introducing my wife to Battletech

It's been a few weeks without a game and I'm going into withdrawal.  So naturally I decided to try and coax my wife into a game of Battletech.  As I've mentioned elsewhere, she's been resistant to the whole idea of the game, apparently having had a childhood deprived of giant robots. Still, my painted up mechs intrigued her, so she decided to give it a try, with the condition that it was a small-scale game.

In hindsight I probably should have kept it to one mech each, but I thought that giving her the ability to maneuver would make it more fun.  However, I don't really have balanced forces quite yet, so this also became an opportunity to experiment with aerospace, really slowing things down as I flipped through the rule book for half the game. However, with a cat in her lap, my wife can be very patient, and she was a good sport as we both tried to learn the rules. 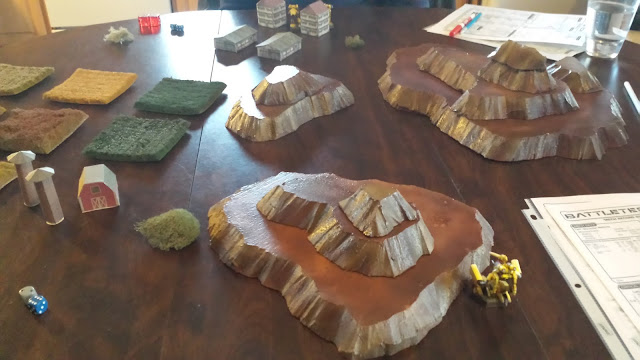 Keeping with the informal feel of the game, we just threw a bunch of stuff down on the kitchen table. My new stackable hills (not actually finished as they're too shiny from the protective gloss coat), fields, and some paper buildings. 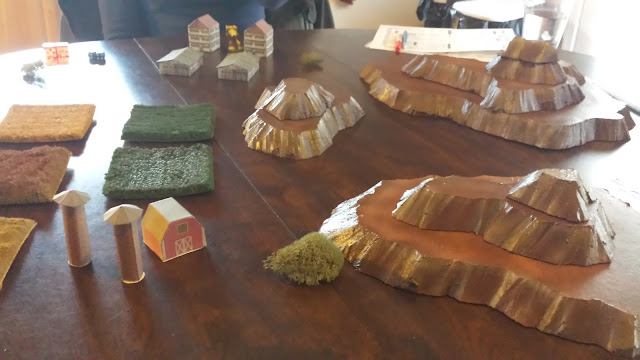 I gave my wife her choice of mechs, and she quickly snatched up my Stalker and Jenner. I took the Marauder for my mech, but I lacked a sheet for my only other light mech, so instead of a second mech, I took a very fast and maneuverable Sparrowhawk fighter. 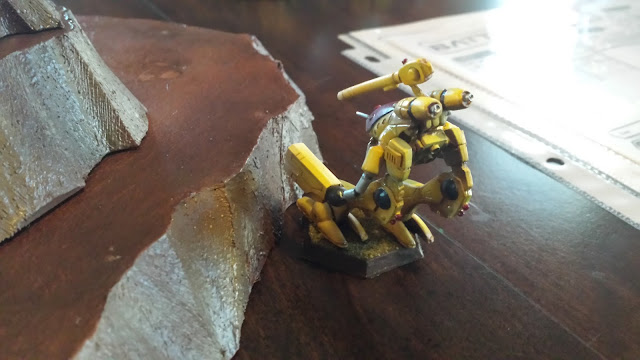 My wife's forces enter the fray... 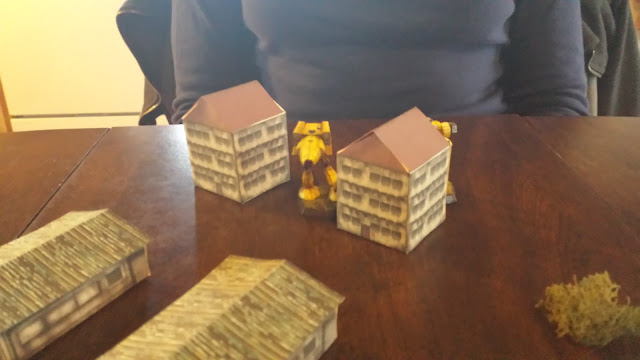 This is battletech, so the first few turns are typically slowly approaching the enemy. However, my plane was far from slow... 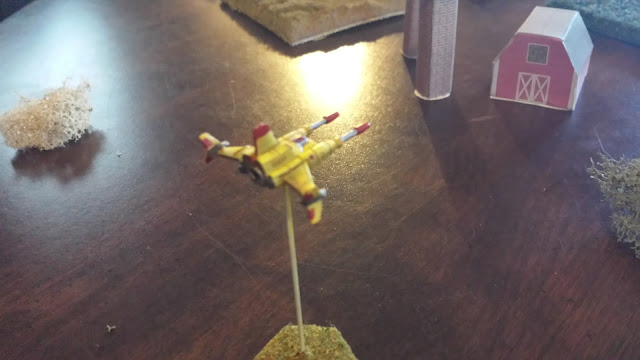 First turn meant the first attack run, this against the Jenner. The Jenner returned fire as the plane passed overhead, clipping its aft near the engines. 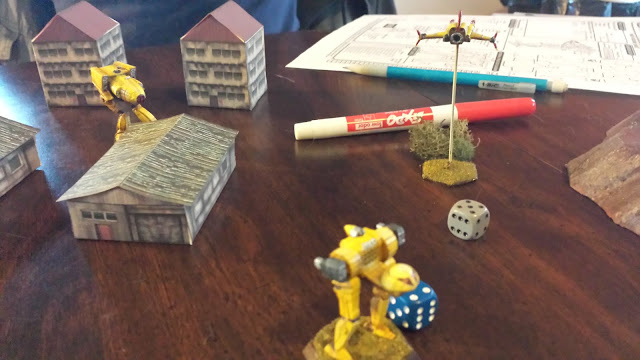 On the second turn, I came around for another pass. The plane proved difficult to hit, as I kept my elevation high enough so that the Stalker had long range at best. 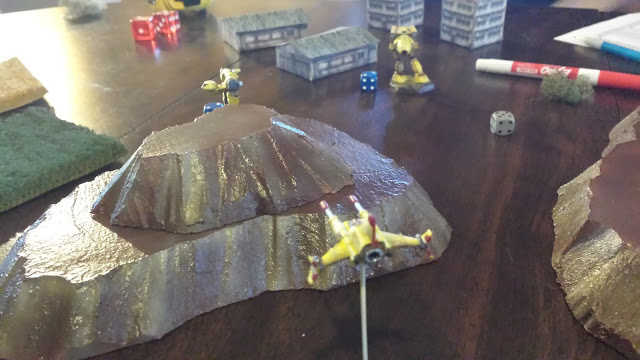 Soon, things got ugly. Trying to use the hill for cover, the fast as lightening Jenner flanked me and got to my rear. She's heard stories about me doing this to Fritz, and enjoyed turning the tables on me. 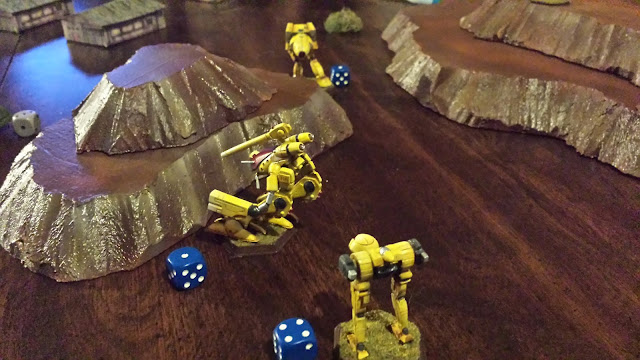 The fighter was making passes every turn and struggling to hit the constantly moving Jenner. I'd hoped to eliminate the Jenner early, but I could barely hit it. Switched the target to the Stalker as it's slower and easier to hit, but unfortunately, medium and small lasers can only do so much to its armored bulk. 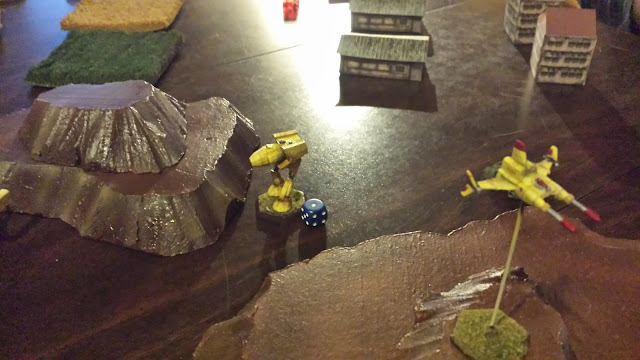 The Marauder certainly looks like it should be fast, but it's definitely not. Only slightly faster than the Stalker really, and half the speed of the Jenner. Losing initiatives for more than half the game meant I was constantly being out maneuvered.  Worse, the Stalker cleared the hill, and achieved medium range... 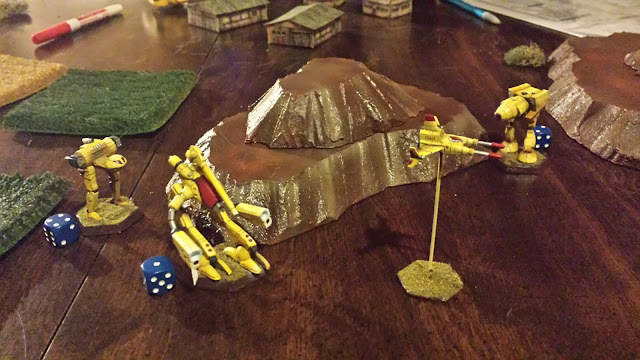 While the Sparrowhawk landed some rear armor hits to the Jenner, it was "good damage", scattered about evenly. 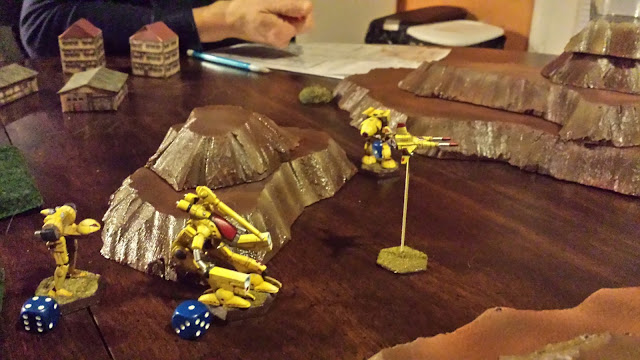 My own damage was dangerously concentrated. 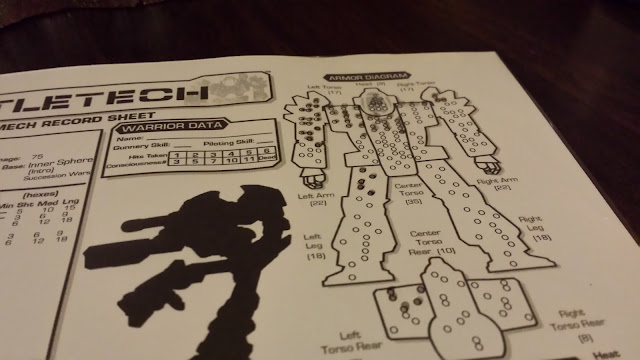 Once we got in close, I cooked off all my weapons, dangerously spiking my heat and narrowly avoiding a shutdown. The next turn, to give my mech a chance to reduce the heat from those PPCs, I finally won initiative and moved right up to the Stalker for some fistacuffs. It landed some damage and dropped my heat, but it wasn't enough. The Jenner just kept picking away at my rear the whole time. 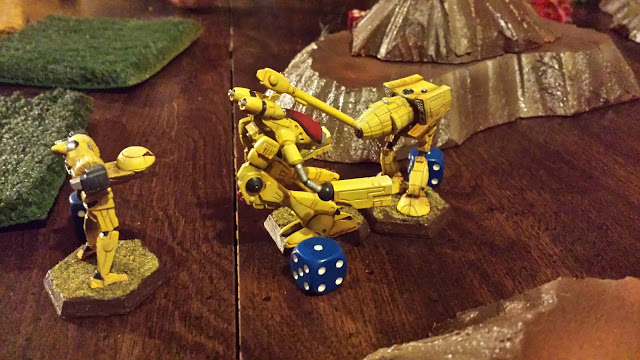 All the while, the Sparrowhawk took whatever shots it could find. Next time I need to load it up with bombs.  Finally, some lucky PPC hits completely destroy the Stalker's left "arm", taking out half its weapons! 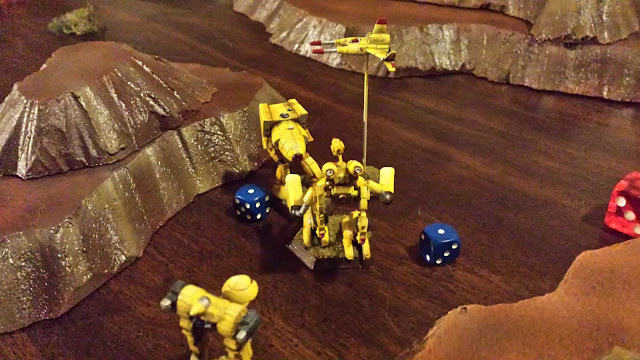 However it's too little, too late. The return volley blows my own right arm off, and three successive hits to the internals of the center torso sees the mech's engine shielding pierced and then destroyed, leading to a complete shutdown of my Marauder.  A victory for my wife, and for martial harmony in general. 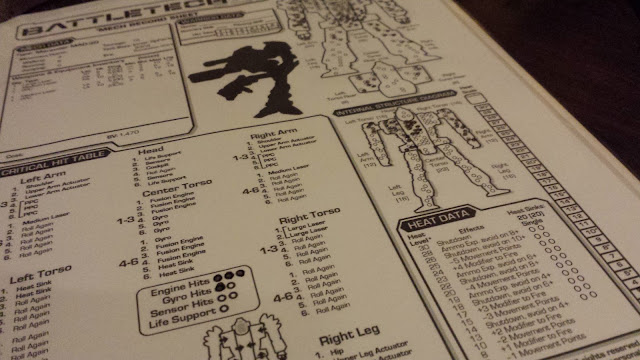 Her Stalker was also in pretty rough shape, but her basic systems were still functioning. 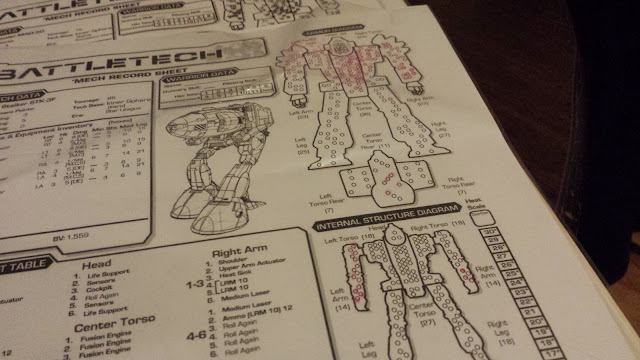 A fun game and some lessons learned:

1) The Marauder is deceptively powerful. It's weapons can be nasty, but it is really terrible for heat management (although great on ammo). Firing both PPCs (let along the large and 2 medium lasers) will claim all your heat sinks that turn, and if you so much as walk as well, you're starting to build heat. It's also fairly slow, but that's to be expected of a heavy mech. The heat thing is critical, so I'll have to make sure the mech is never unescorted like this again.

2) Aerospace lessons: Well, the Sparrowhawk specifically is definitely more of an interceptor than a ground support unit. It's weapons just lack the raw damage potential to do much on their own. Bombs would help, but the unit is clearly best used as support for another plane, which is actually why I bought it to begin with. Once in range of my Marauder, my wife completely ignored the plane, and got away with it. Still, I enjoyed playing with some air support, and I can see how it has a solid role on the table, although not a replacement for mechs. I suppose the same could be said of any non-mech unit in the game.  Mechs remain the kings of the battlefield, as it should be.
Posted by Unknown at 2:17 PM

Email ThisBlogThis!Share to TwitterShare to FacebookShare to Pinterest
Labels: Battletech