Slaughter by the Water

My usual Thursday night game of All Quiet had to be a bit abbreviated this week, as Fritz's wargaming buddy was joining us with some Napoleonics. As it turned out, this was probably a mercy, as the game was phenomenally one-sided.  I decided to play the Martians again, since I've played the Americans in the past few games with Fritz.

Scenario:
A Martian force has crossed the Mississippi just North of Vicksburg, hoping to draw away some of the defenders gathering around Memphis to engage them. This is a break-point game, where both sides are trying to cause the other to retreat by eliminating half the enemy force. Martians needed to kill 8 human units, and the Humans needed to kill 6 Martians. Points were about even (not that it matters). 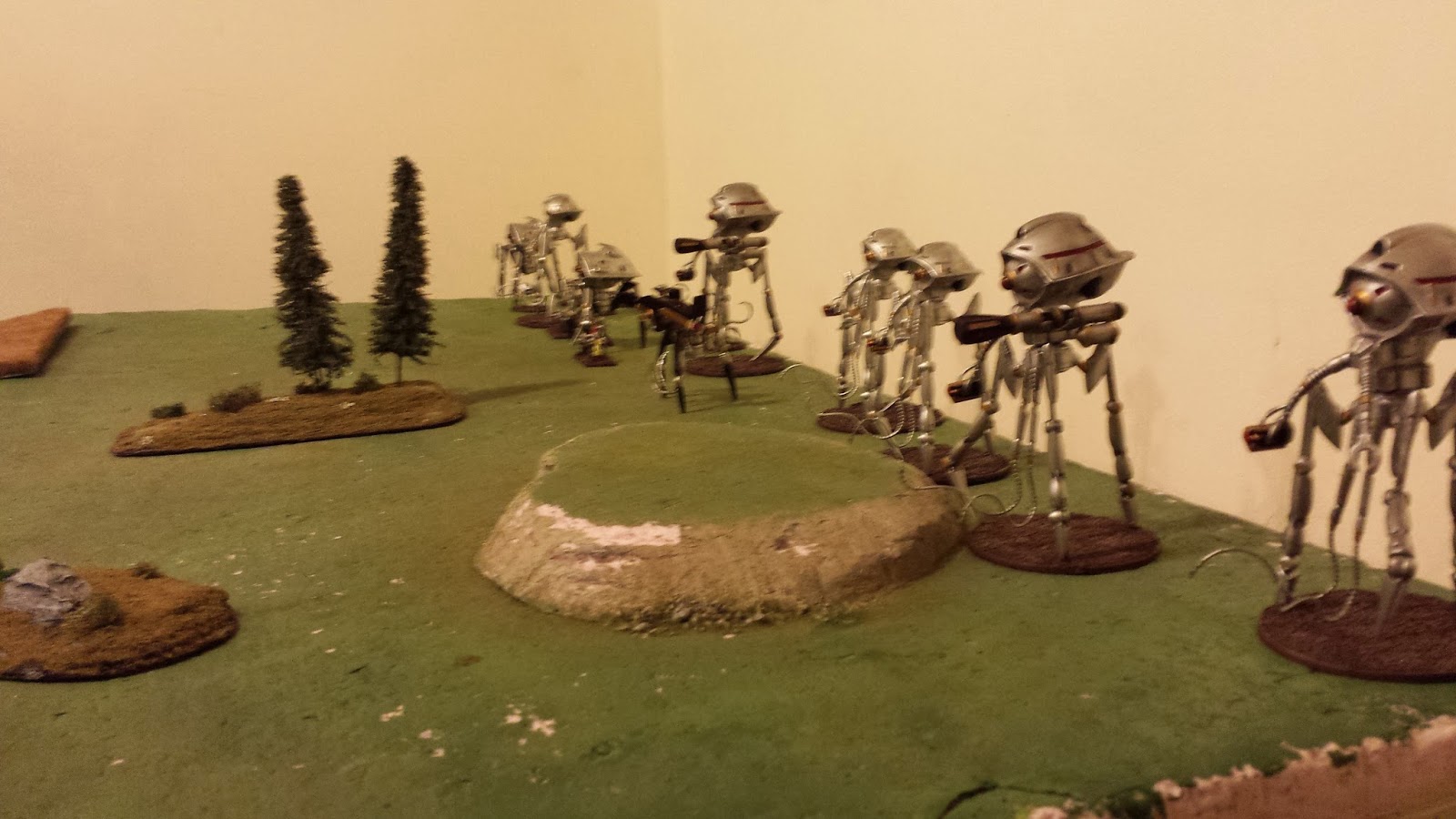 The board was dotted with hills, with the humans taking the watery area. There were fields to the Martian right, and hills and open ground on the left. I put the slavers and drones on the right, escorted by a scout tripod, the remaining two scouts, a black dust tripod and the grenadier at center, and two more tripods on the left. 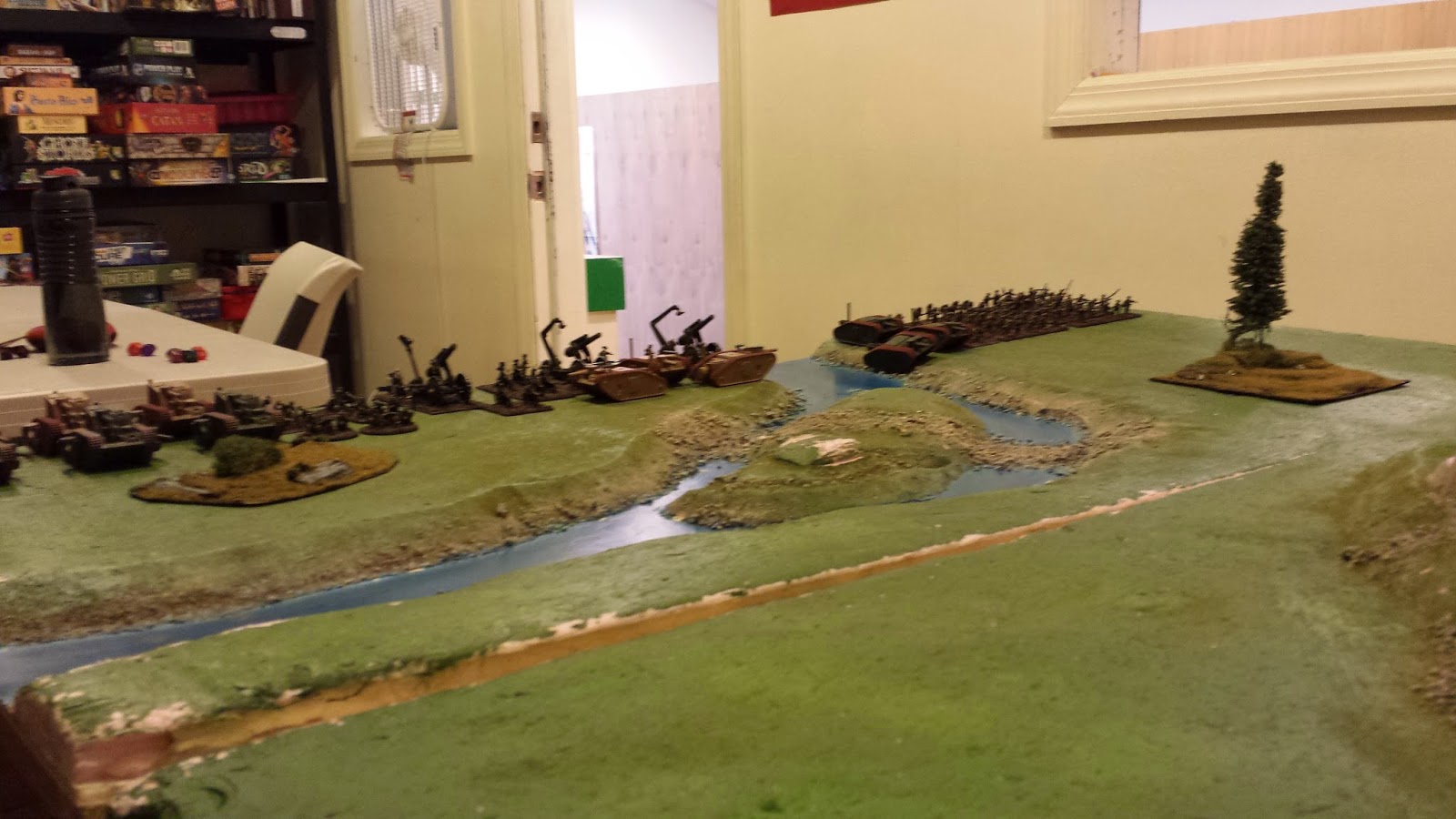 Fritz did much the same (I deployed first), concentrating his infantry on the right, backing them up with mortars. The center was home to the heavy artillery, the commander, and some MKIIs, while on the left he matched my strong assault tripod force with 2 MKIIIs, 1 MKII, a mortar team and a HMG. He would have had another HMG, but my wife broke one of the elements during our game the other night. I'm told it was "accidental". 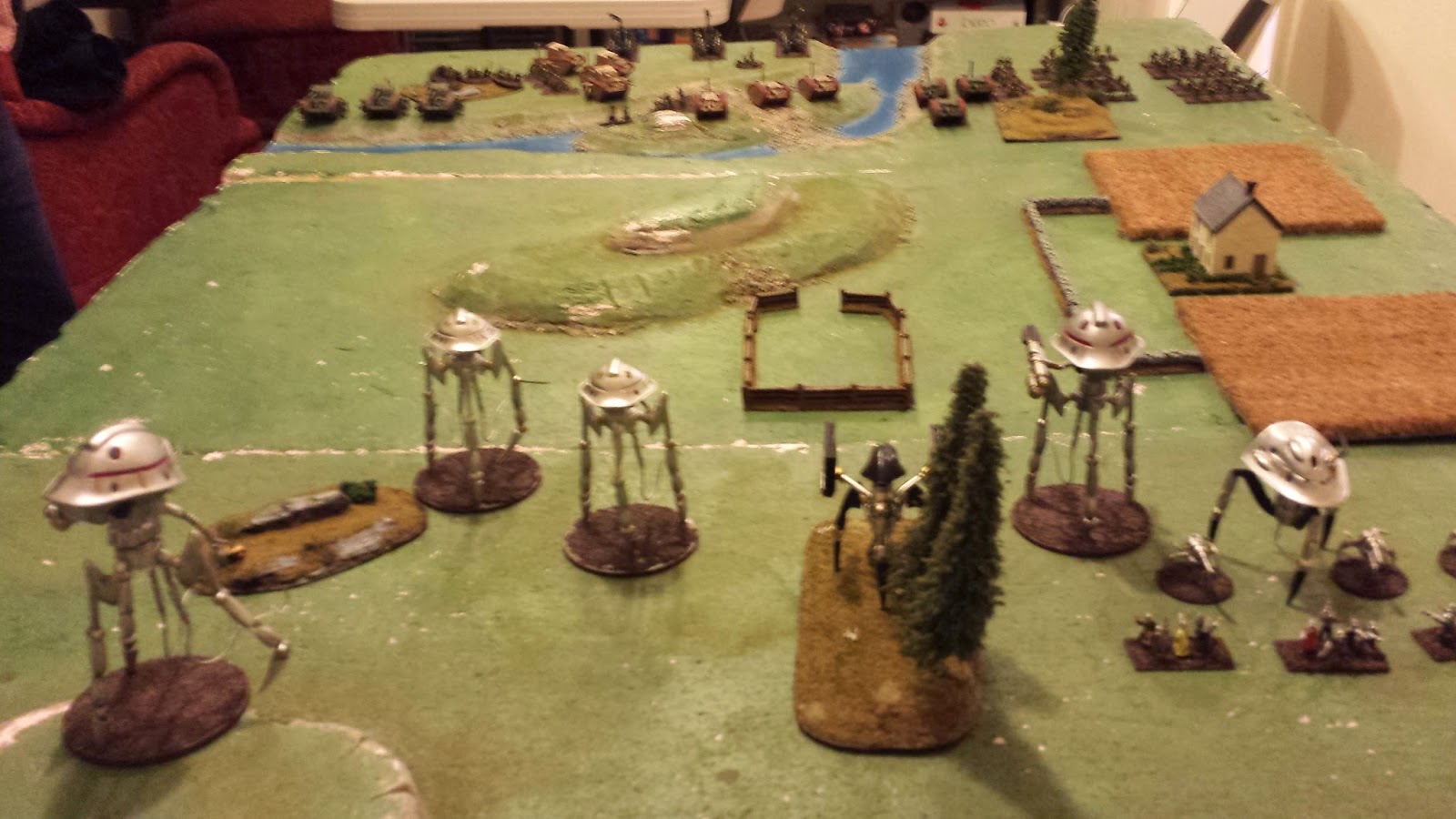 First turn saw little action. I won initiative, which in a long table game isn't the best thing. I pushed forward, but was just out of range, even for the grenadier. I was, however, in range of the heavy guns.  Fritz wasted his first couple of shots shooting his big guns at the grenadier which was highly obscured by the large hill at the center of the table. But he quickly shifted his attention to the softer targets on the right. 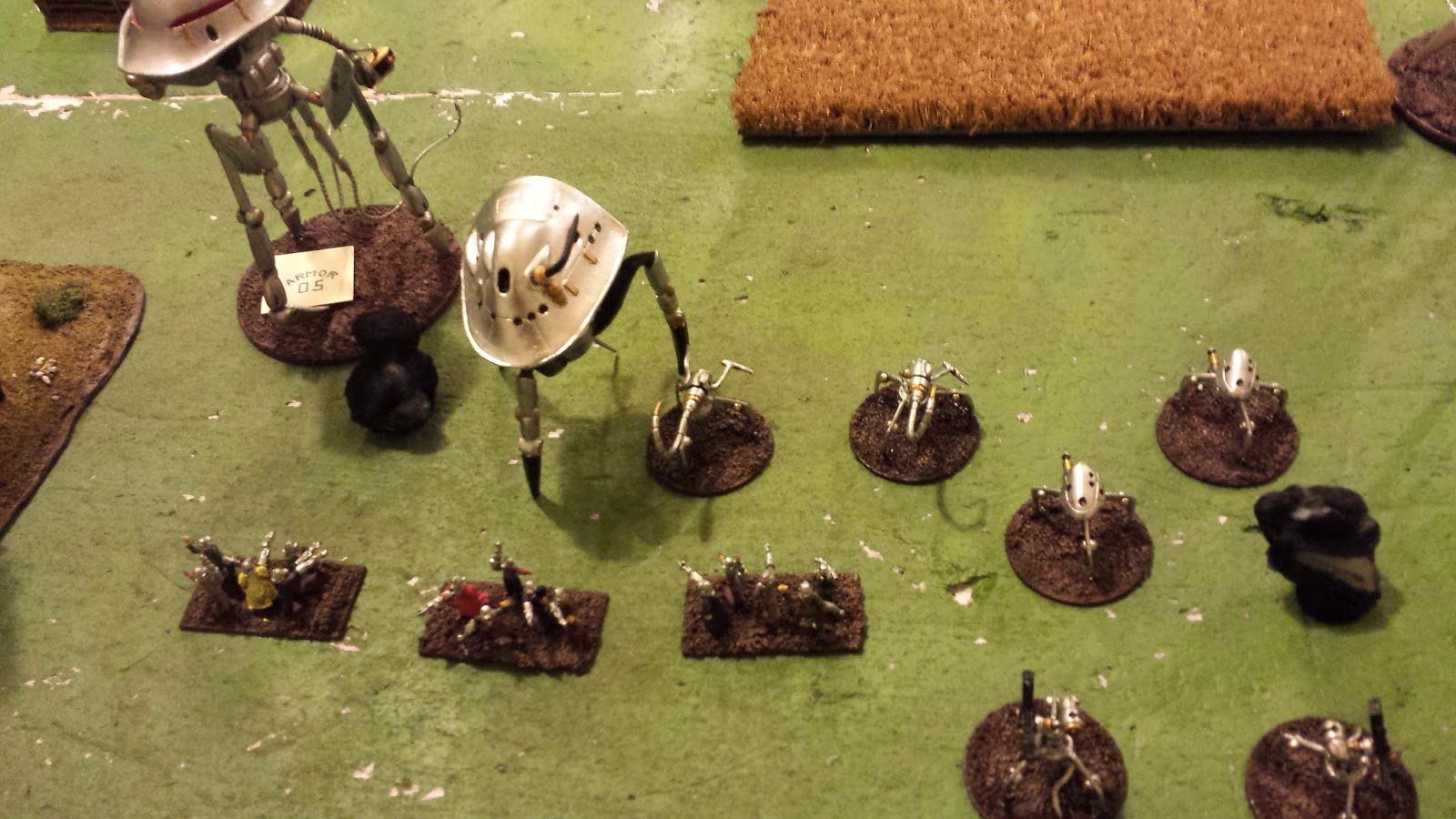 He managed to destroy several elements of drones, but no full units. The Martians were able to get their drones into the corn fields, and the shock drones poured black smoke on the infantry hiding in the adjoining fields. The scorpions and regular drones followed the smoke in, securing excellent positions.  Fritz used the artillery well, and managed to frag the rest of the scorpions, but sadly that was his only kill in the game... 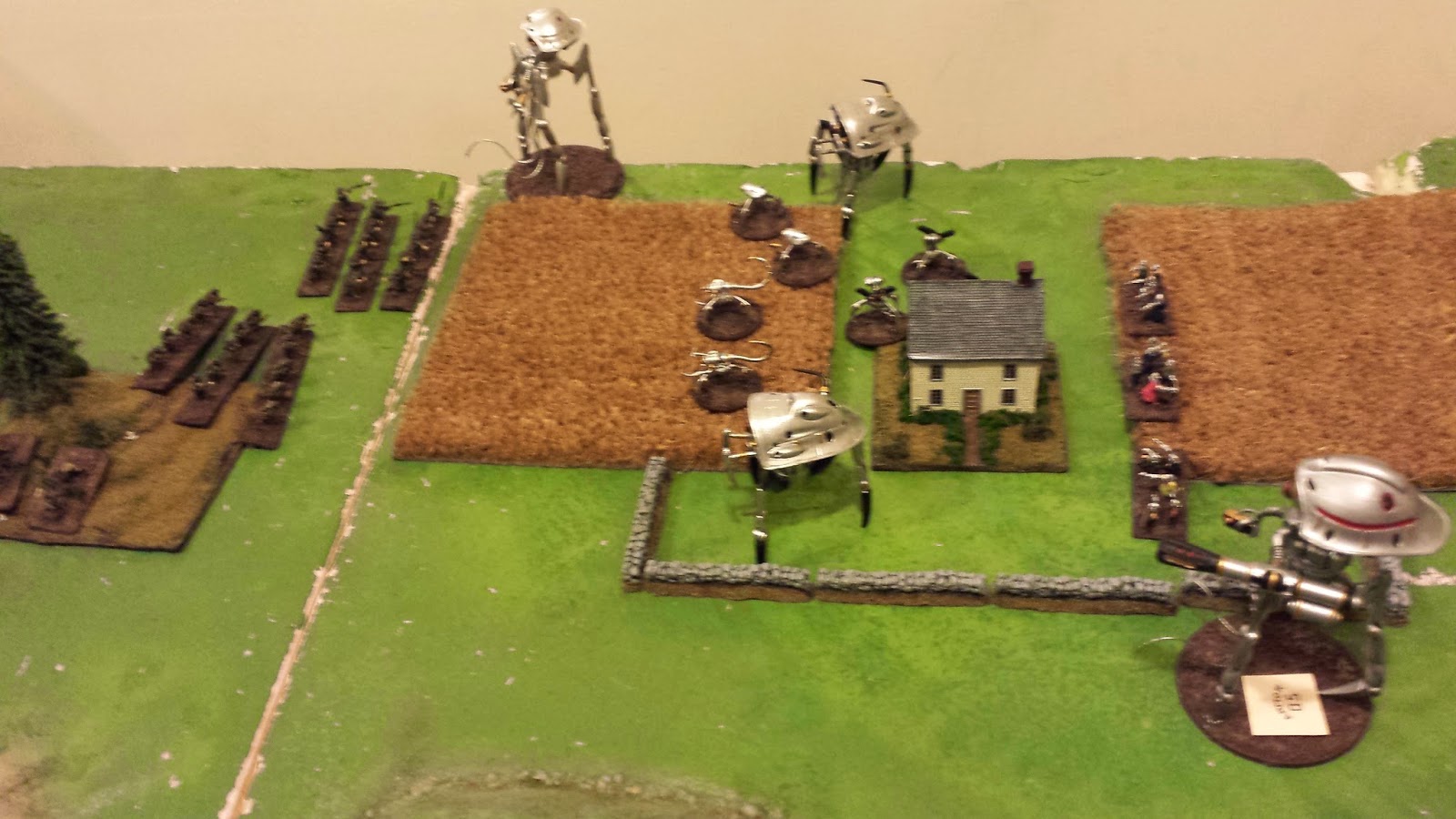 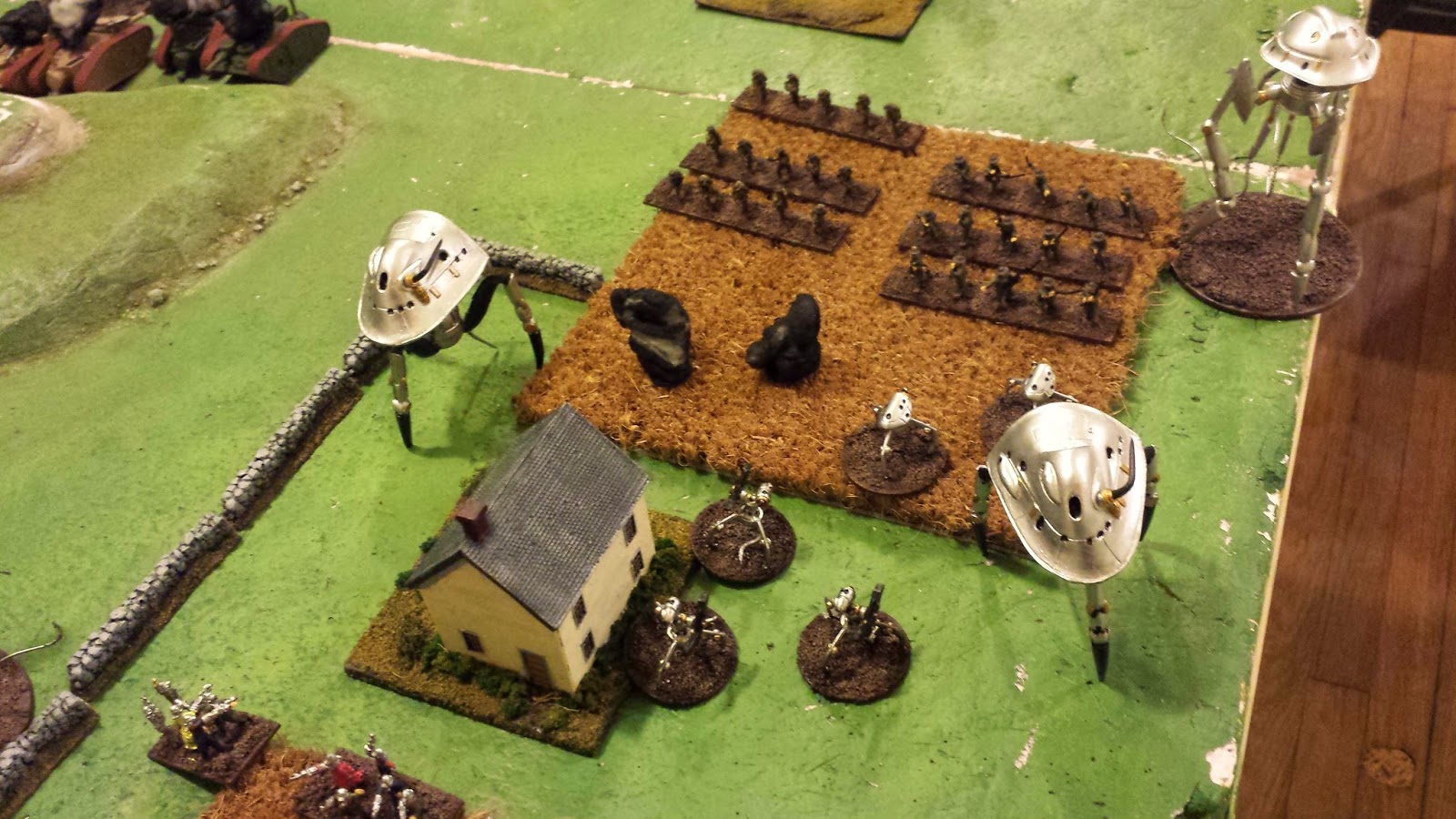 The left was a massacre. The lead tripods swept their heat rays over the MKIIIs, and as the MKIIs gathered to hide behind the hill, the tripods chased them, routing both units in one turn. 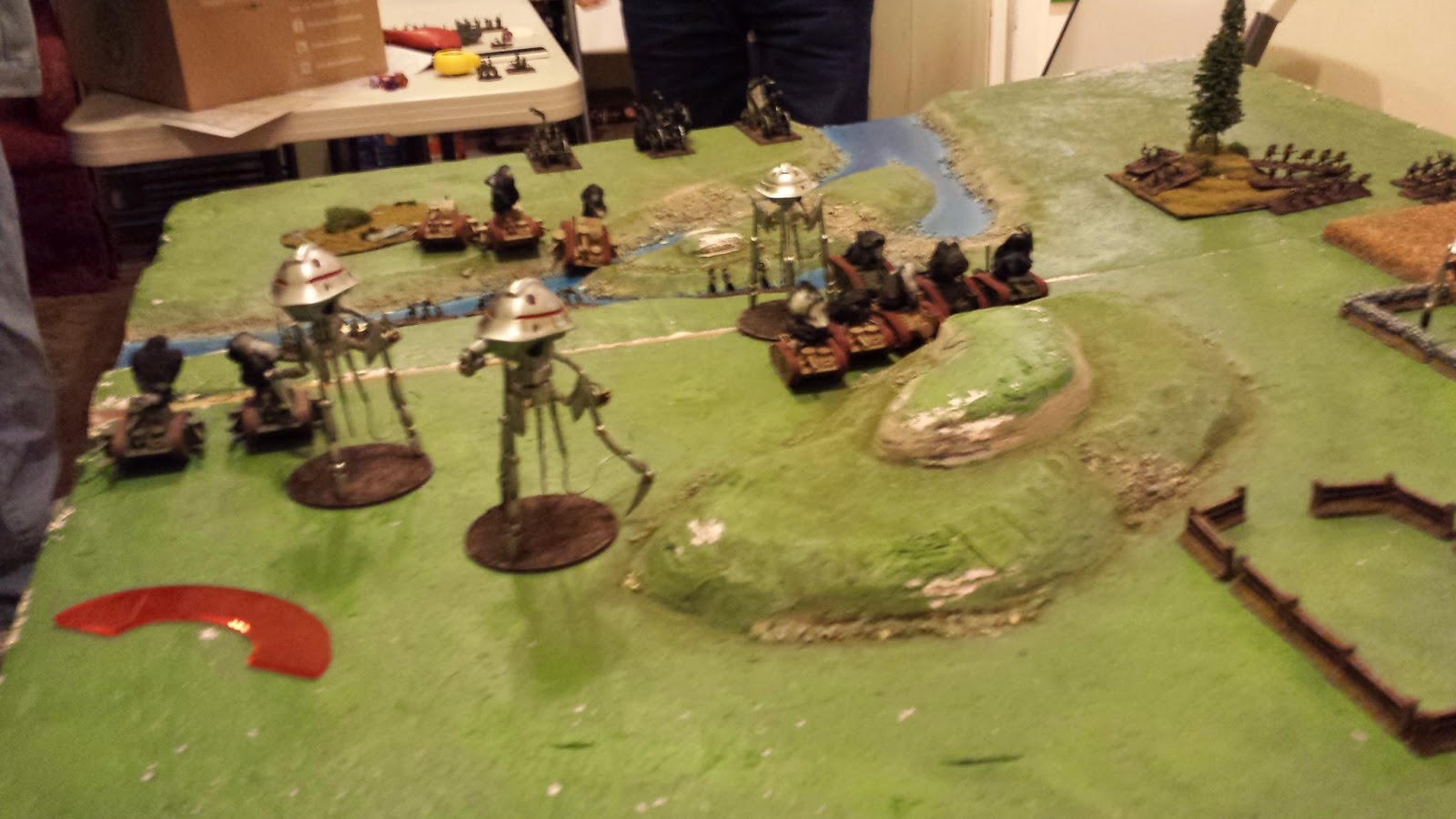 A scout tripod quickly rushed up and finished them off on its second move. I was worried about the rough riders, considering how close they were, but Fritz had other plans for them. He used a move order and rushed them into base with the nearest Assault Tripod, which he clearly regarded as the larger threat. 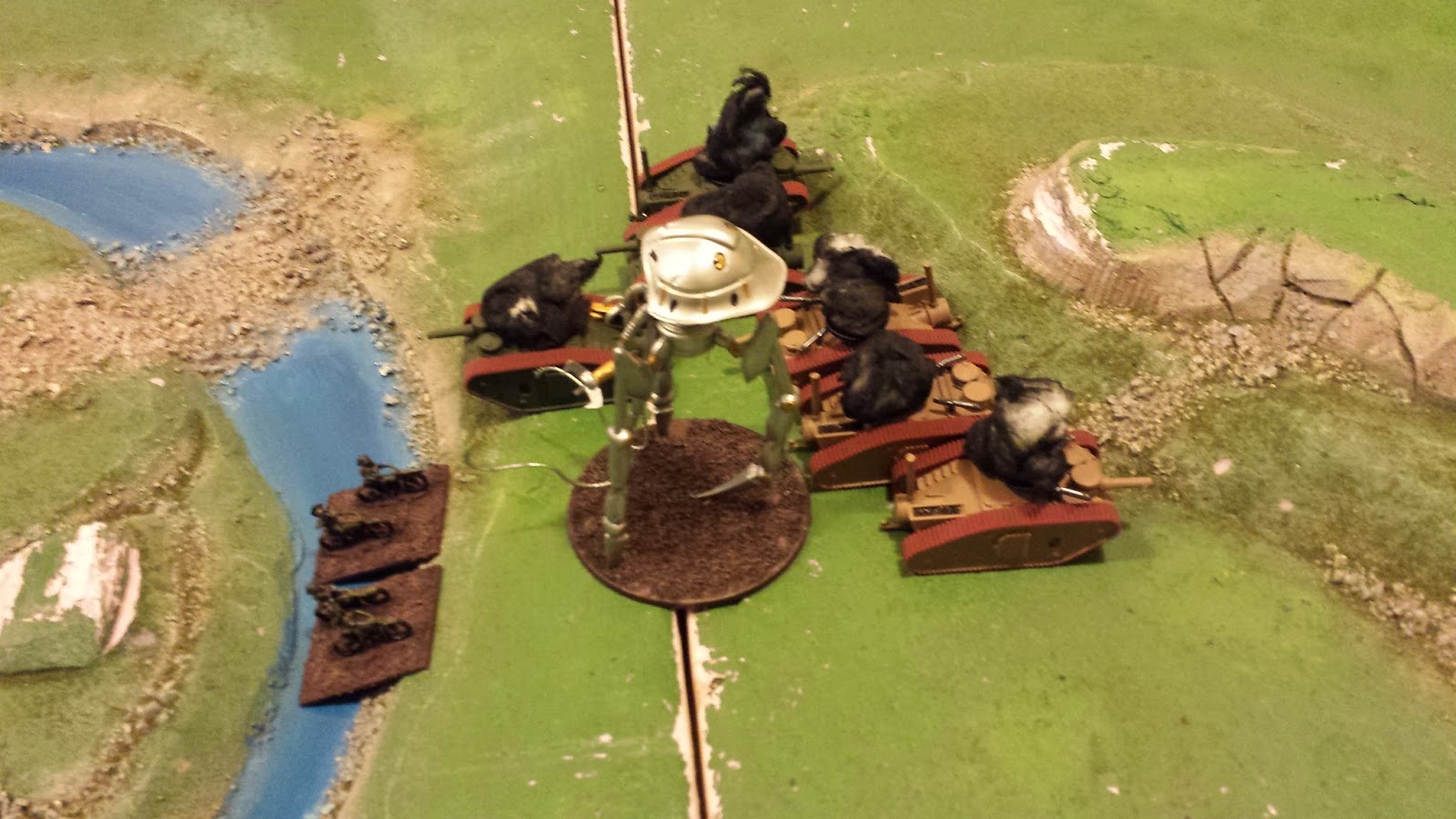 The rough riders immobilized the tripod, and the few American forces left concentrated every scrap of fire on it.  It was a tense moment, as we both knew that the only way the humans had a chance was to kill this tripod here and now. 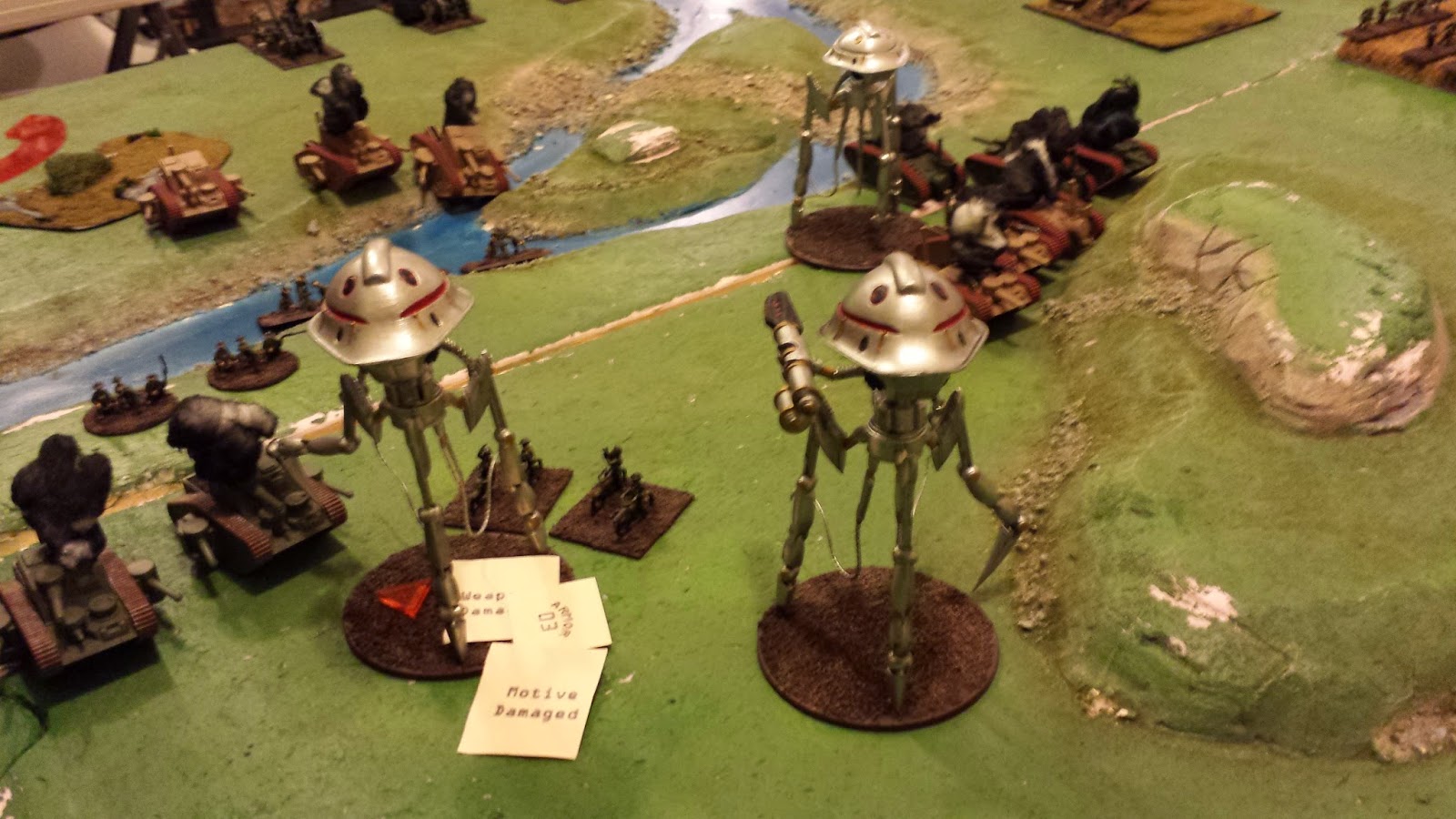 But it was to no avail. The armor took it all.  Despite the best American weapons, it ended the turn with an armor of 3, and both weapons and movement systems damaged, but when the smoke cleared, it still towered above the terrified humans.  Seeing it, they sounded the retreat.  The Martians marched unimpeded into the swamps north of Vicksburg...


Bonus:  A look from the other side (and more pictures!)by my buddy Wargamer Fritz.