Ah, the Napoleonic Wars, possibly the last time marching slowly in easily targeted lines towards the enemy could be considered a good idea. This is my second game of "historicals" ever (the first being a game of Johnny Reb), and the rules feel very, very different from AQ and the other games I've been playing with Fritz and others.

I found it initially frustrating, as it was a bit more complicated than the other games (certainly more complicated than AQ), but I think a lot of that is not knowing the rules, and not finding out about important rules (like the fact that only one unit can attack a target at a time, unless they're in support) until I had already wasted turns getting into position. Frustration aside, it was fun and different, and I plan to read the rules fully before playing again.

After Fritz's buddy Burt trounced me (no pics, I was busy trying to learn the game), Fritz and I faced off across the table.   I got to carry the standard of the Revolution and play the French, while Fritz got to be true to his German roots and play the Bavarians.  It was a little slower paced than I'm used to, but playing with Fritz is always fun - we keep a solid pace. Thanks to Burt for reffing and bringing the models.

Fritz deployed much as he saw Burt do the game before: artillery at center, forces mostly in a line, but he made a few changes to the standard line.  He put his cavalry next to the artillery, kept his main line in the trees, and guarded his (my) left flank with an understrength regiment. I (the attacker) deployed 2nd, and I had no intention of repeating my mistake of the last game (putting my forces straight in front of the artillery). I split my forces, a risky move, hoping to take advantage of what I perceived as weakness on the left.  I hoped to push my skirmishers and cavalry up to take the forest, and wheel around into the artillery.  It was my hope that by the time our main lines clashed, the left would be belong to the French. 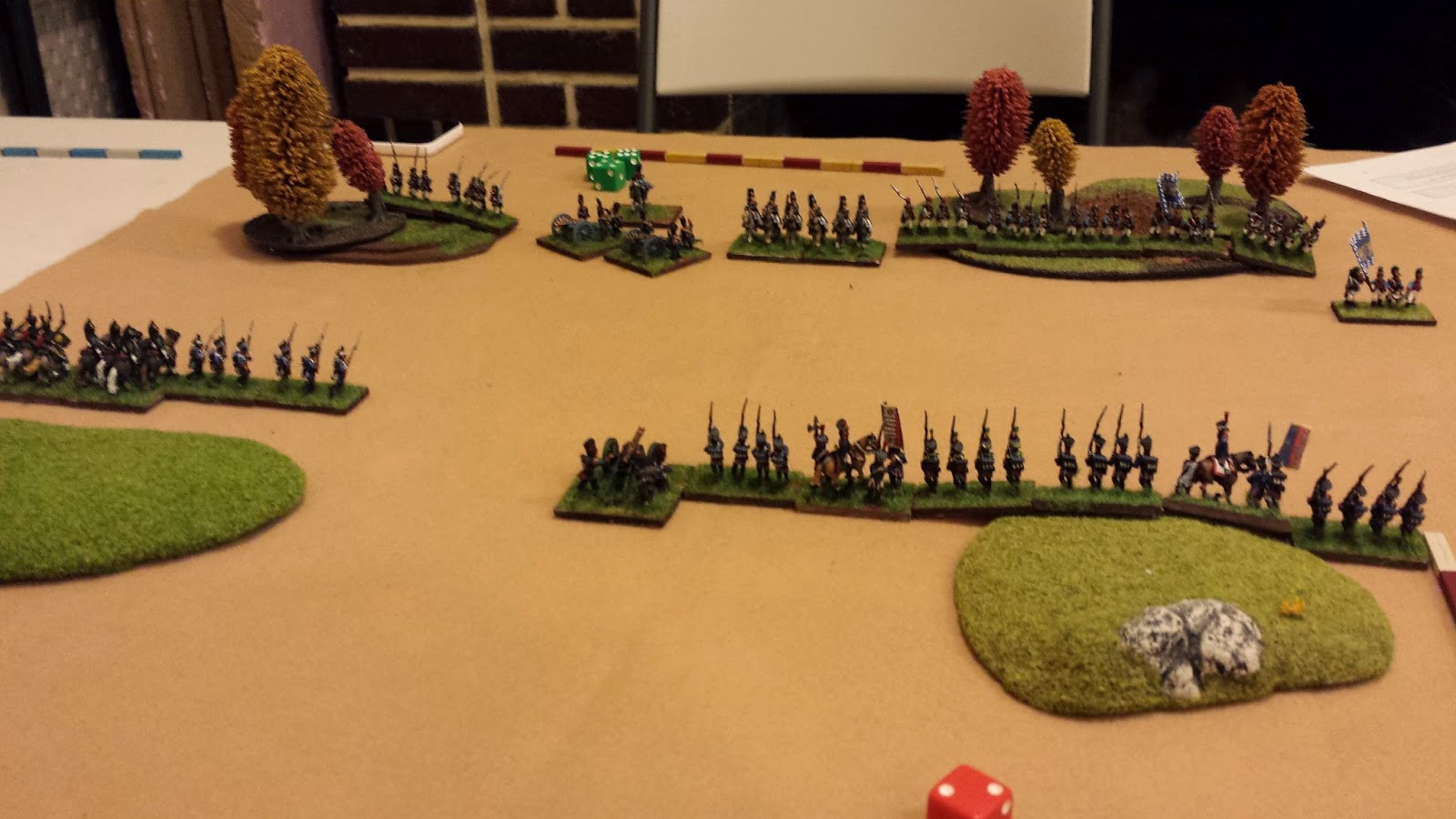 The left did indeed engage much quicker, as my cavalry and skirmishers had faster movement than regular infantry. It was a bloody affair, as Fritz turned his artillery towards the skirmishers which worried me deeply, and by all rights should have shredded them. My artillery meanwhile managed to destroy one of his two cavalry stands. The remaining one he slammed into my main lines, which turned out to be ineffective, in fact pushing it back and shaking it, disrupting his own line in the process. The next turn, he charged his shaken cavalry again, despite knowing that the odds were severely in my favor, saying "Yes, but imagine the glory if I win!" and shortly thereafter the cavalry was gone.

With the lines nearing each other, a poor dice roll ended up working strongly in my favor. In this game, you roll a die to determine how many groups (figures whose bases touch) you can move per turn. With my forces split, I needed more moves, but rolled poorly. I concentrated my few moves on the left, which left none for my main lines. They just stood there, waiting for orders.  However, Fritz rolled better, and moved his lines up.  Earlier, I had wheeled my whole line slightly, intending to straighten them out later, and so when he advanced the lines were at an angle that allowed two more of my units than his to be in range. If I'd rolled better, I would have made a mistake and brought the lines into even combat and lost that edge! 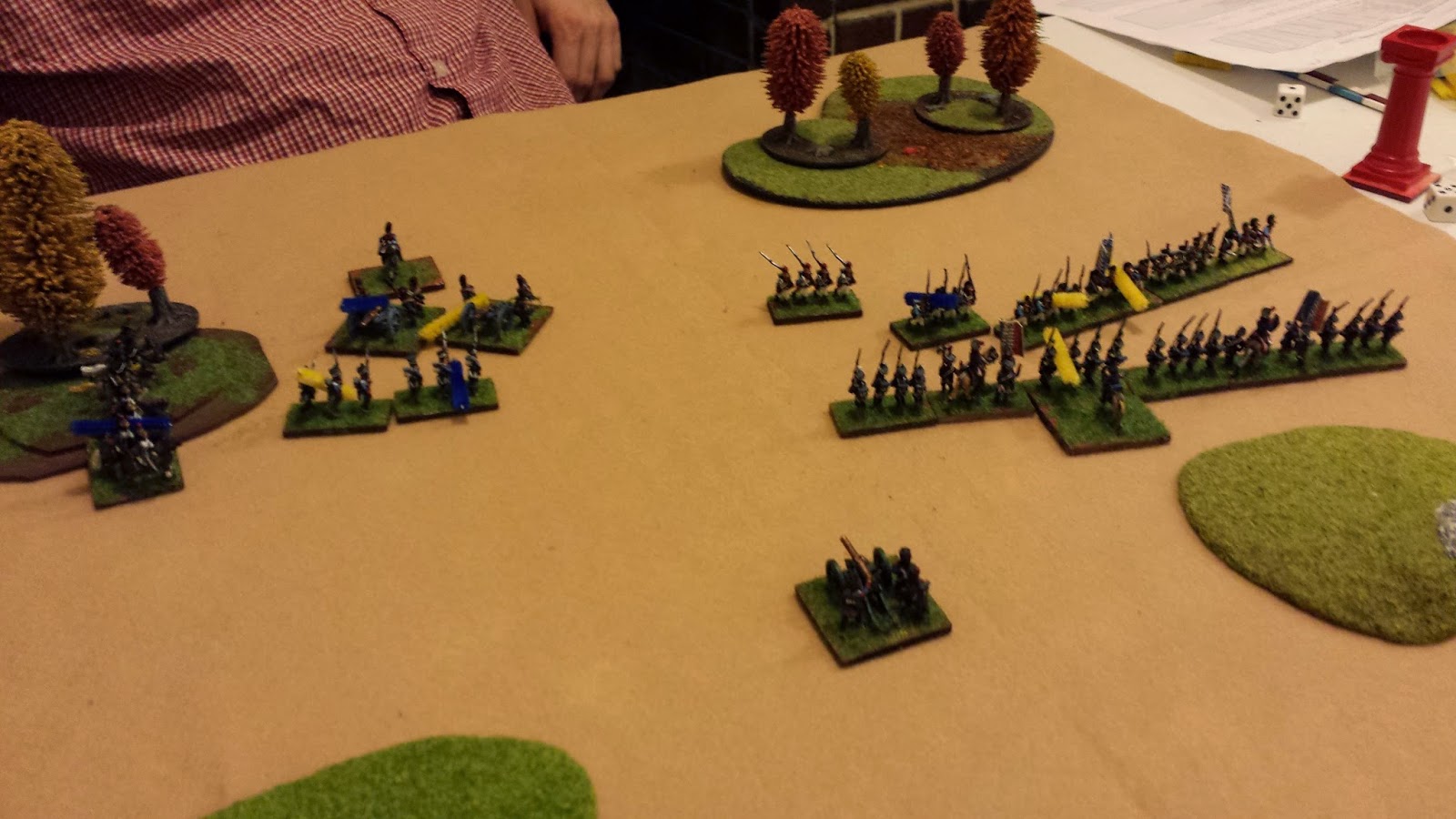 The attack on the left went very well, the cavalry destroying the two infantry units hiding in the woods by hitting their flank. The skirmishers got very lucky and managed to not be killed outright by the cannons, and in fact ended up giving as good as they got.  They were only there to keep the artillery busy and let my cavalry finish their job anyway... 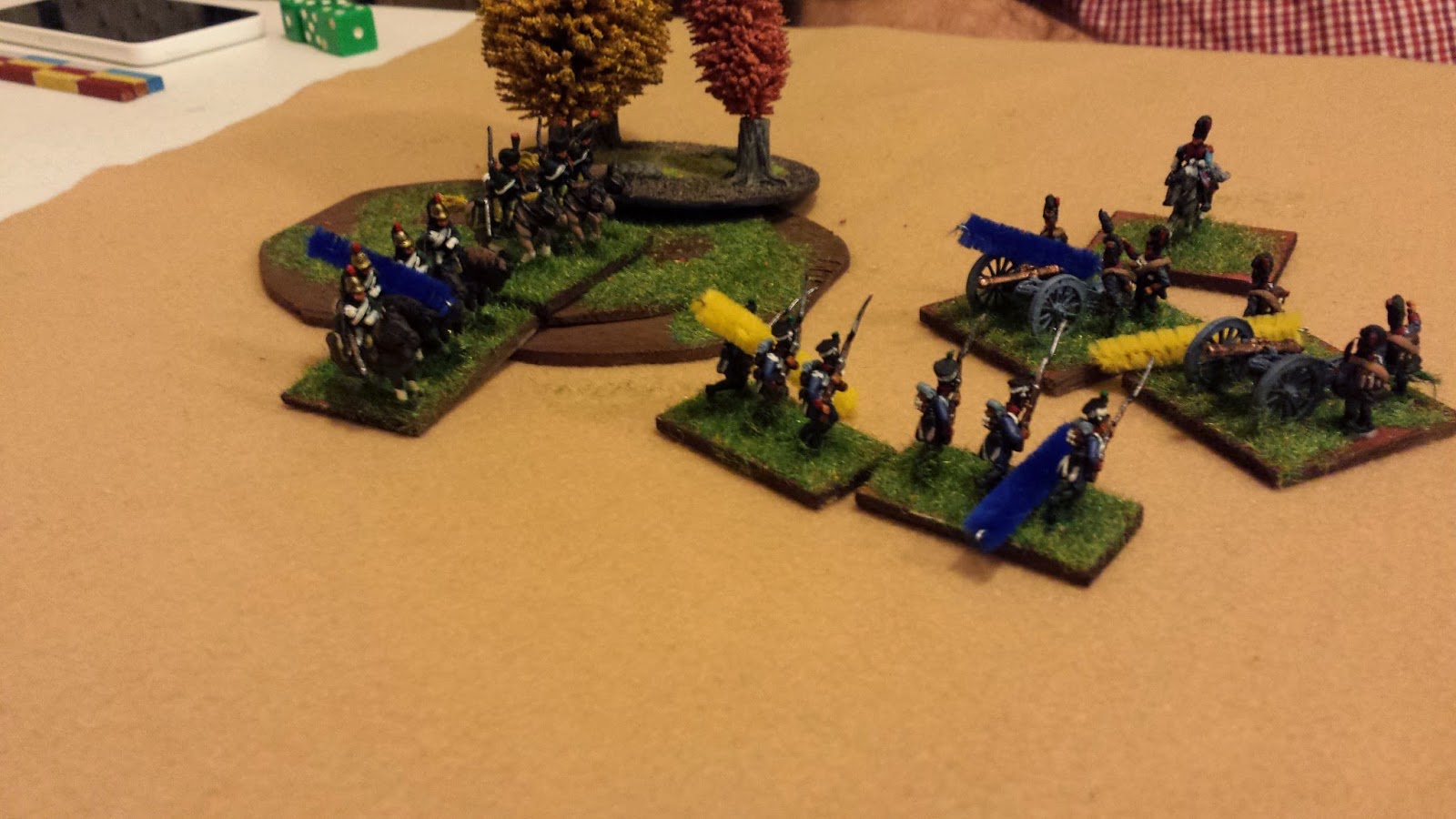 Game ended with a French victory as the left collapsed and the cavalry turned to charge the vulnerable artillery and the Bavarian general.  Glory to l'Empereur!!!
Posted by Unknown at 12:13 PM