My Martian-loving wife, traitor to humanity that she is, is playing the humans in this one.  She'd been talking about trying out the "piddly humans" for a little while, purely in a "know your enemy" capacity, but it was always something she would get around to "eventually" or "at some point". We only had time for a quick game this week, so I asked her if she wanted to try commanding the US forces. She didn't precisely agree... but she didn't immediately disagree either. She wasn't quite willing, I think, to actually say "I want to play the piddly humans". No, the only way she could accept it is if it came down to a random die roll. So, we rolled off to choose sides and thus it was fate, not my wife, that decided that she would play the humans. I credit her for only mild grumbling.

This was to be a simple "break the other army" scenario.

The Table: We rolled everything off, which way we'd play (length-wise), and which side we'd start from. The Martian Left is heavily forested, posing a problem for everything but the drones. Same view from the human side, below. 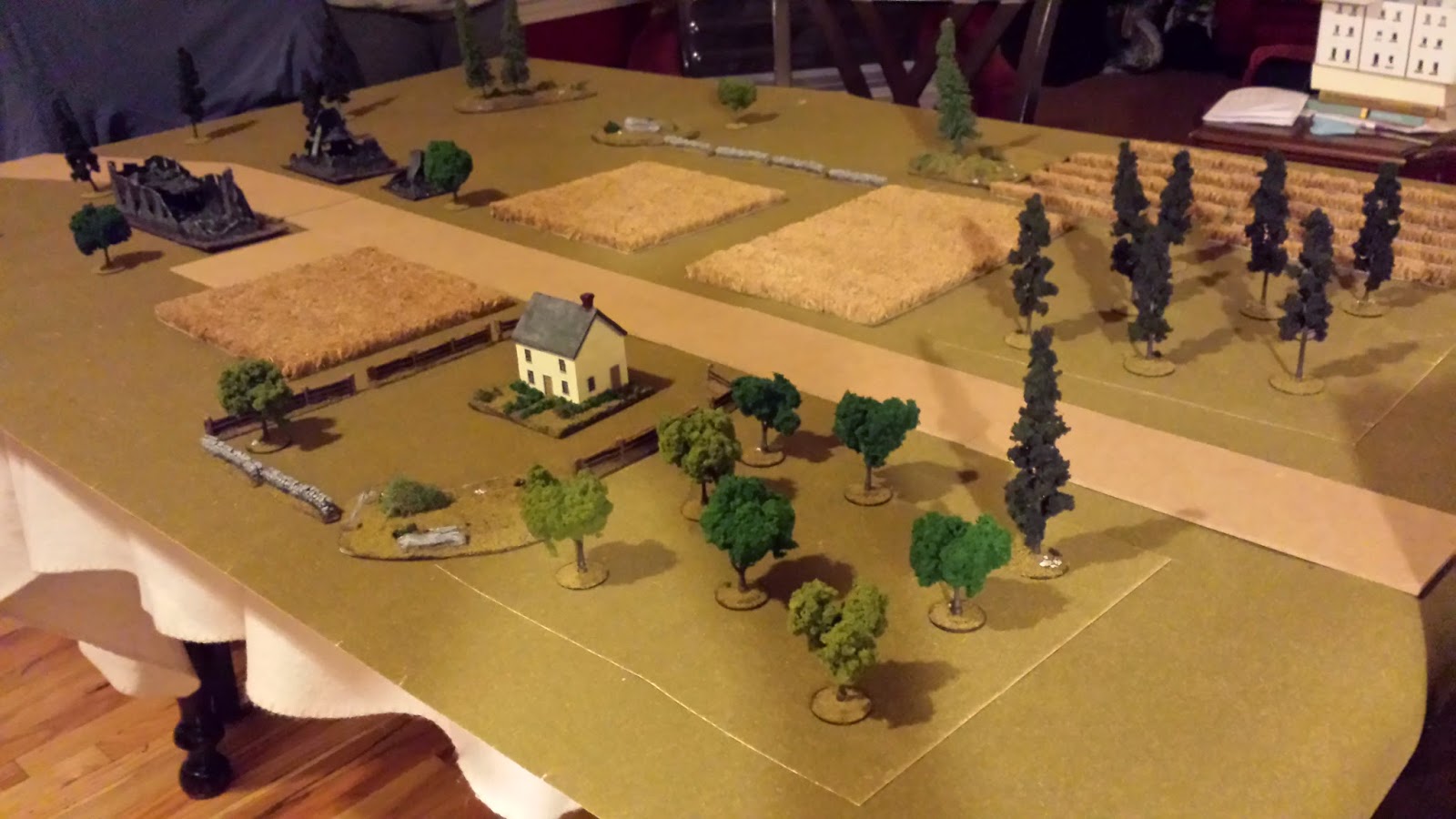 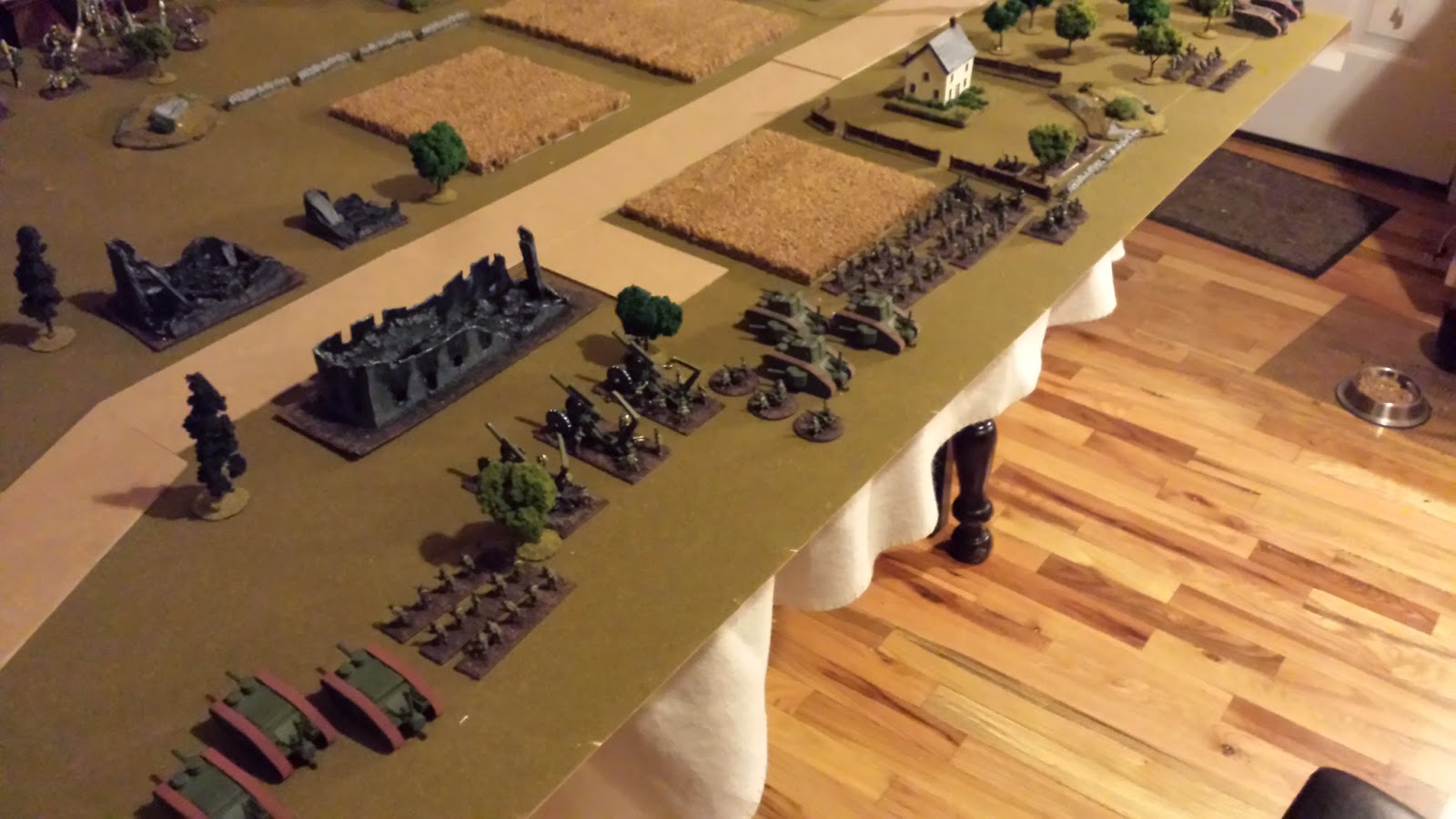 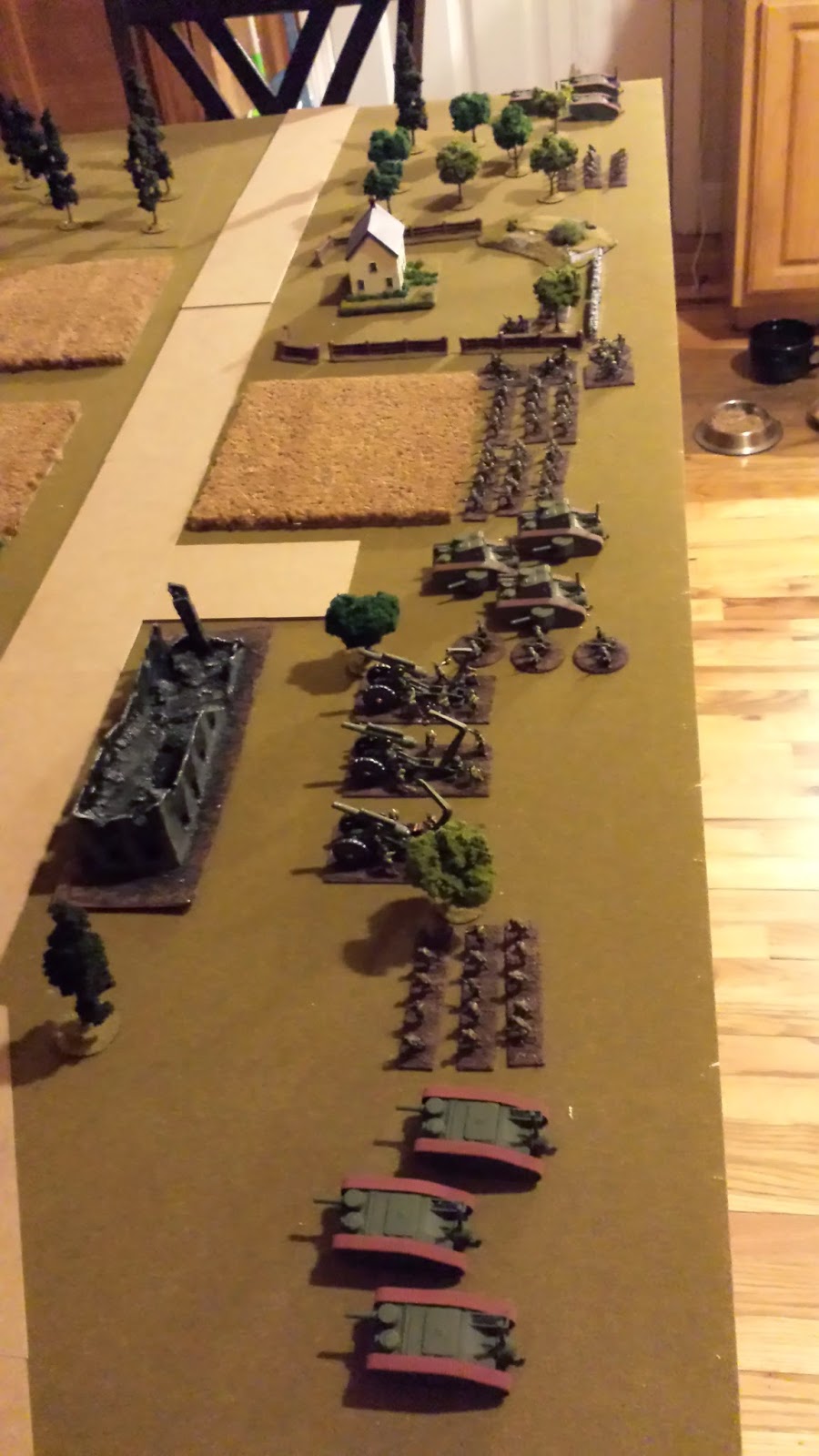 The Martians won the deployment roll-off, and forced the humans to deploy first. My wife deployed her forces evenly, distributing her MKIIs on the far flanks, the MKIIIs at the center, and an even distribution of infantry down the line. She placed her Heavy artillery behind a ruined factory, and guarded them with a machine gun unit.  She also had a MKII unit in reserve (came in the first turn) 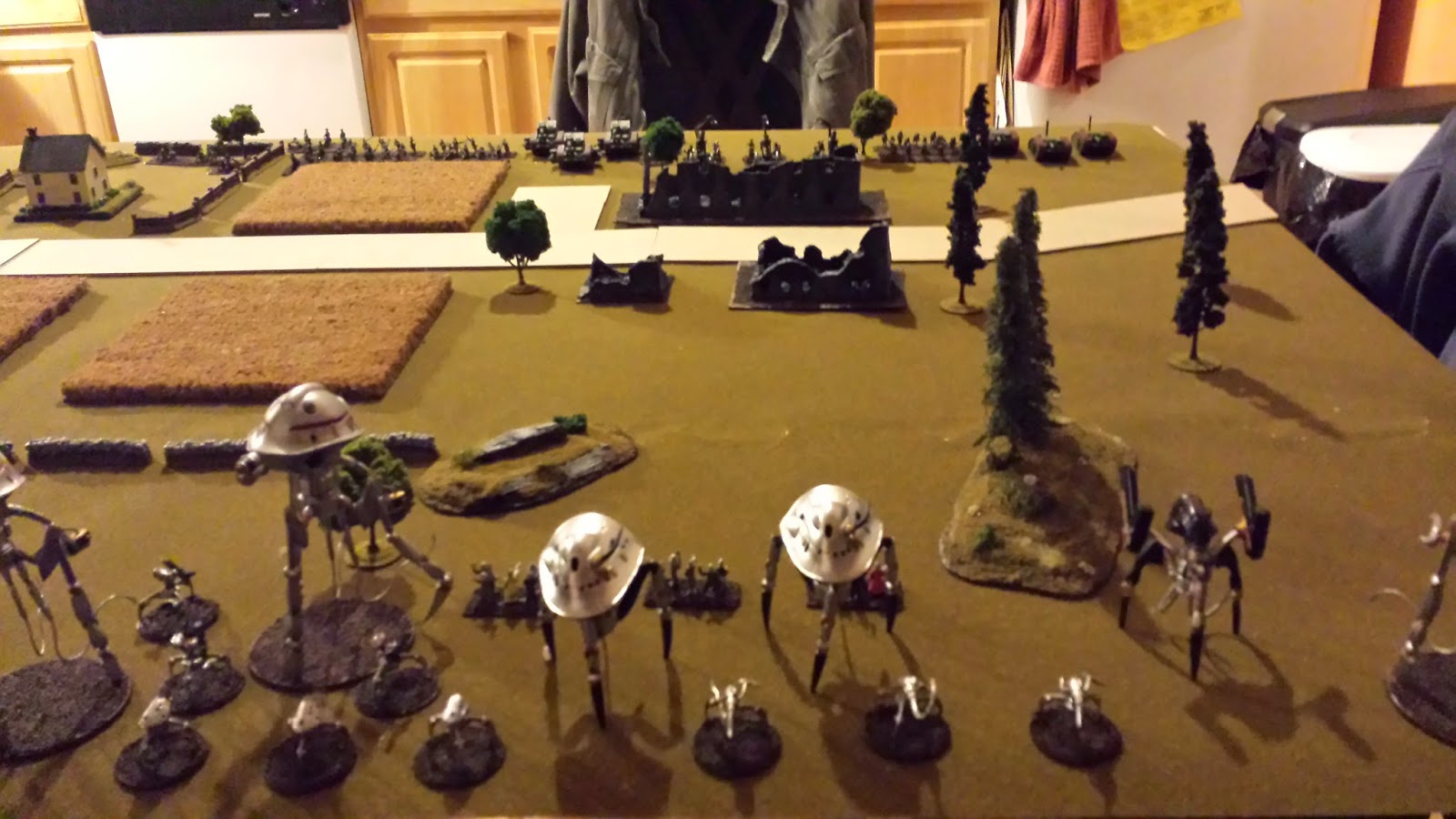 Having no reason to fight in the difficult woods, I concentrated my Martian Hoard on the far right side of the table, planning to drive them straight at the factory to take out those big guns, and force her to waste time on bringing around the left flank (and taking them out of cover) to stop me from walking over the right half of the table. 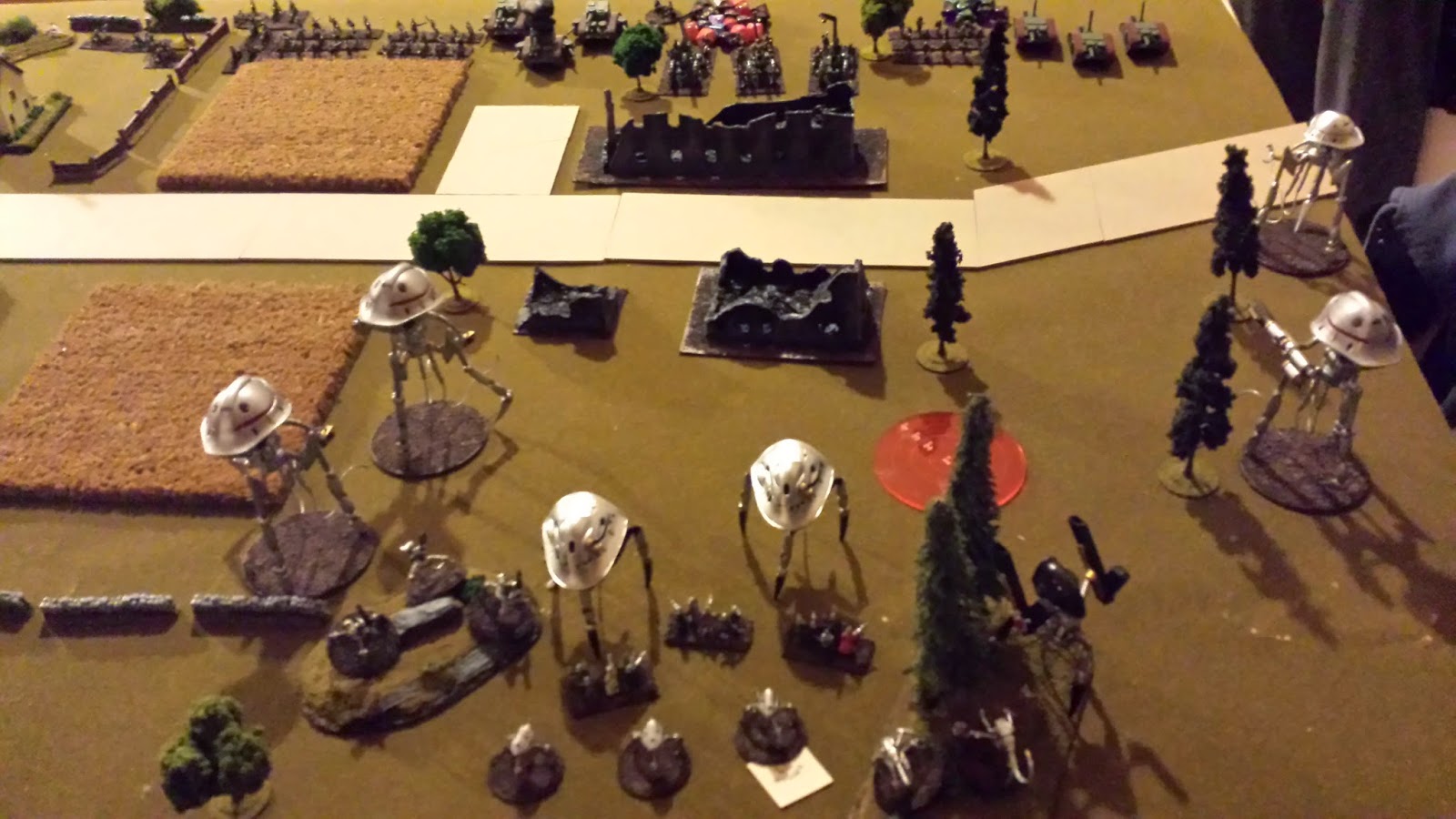 The Martians won the first initiative, and pushed everything up, using two orders to bring the scout into line of sight of the Heavy Artillery, and in range of its targeter. Synching the scout with the grenedier, I intended to destroy the big guns. Sadly, I missed.  I also moved up a tripod at center to make an early attack on the center's MKIIIs, which was more successful. 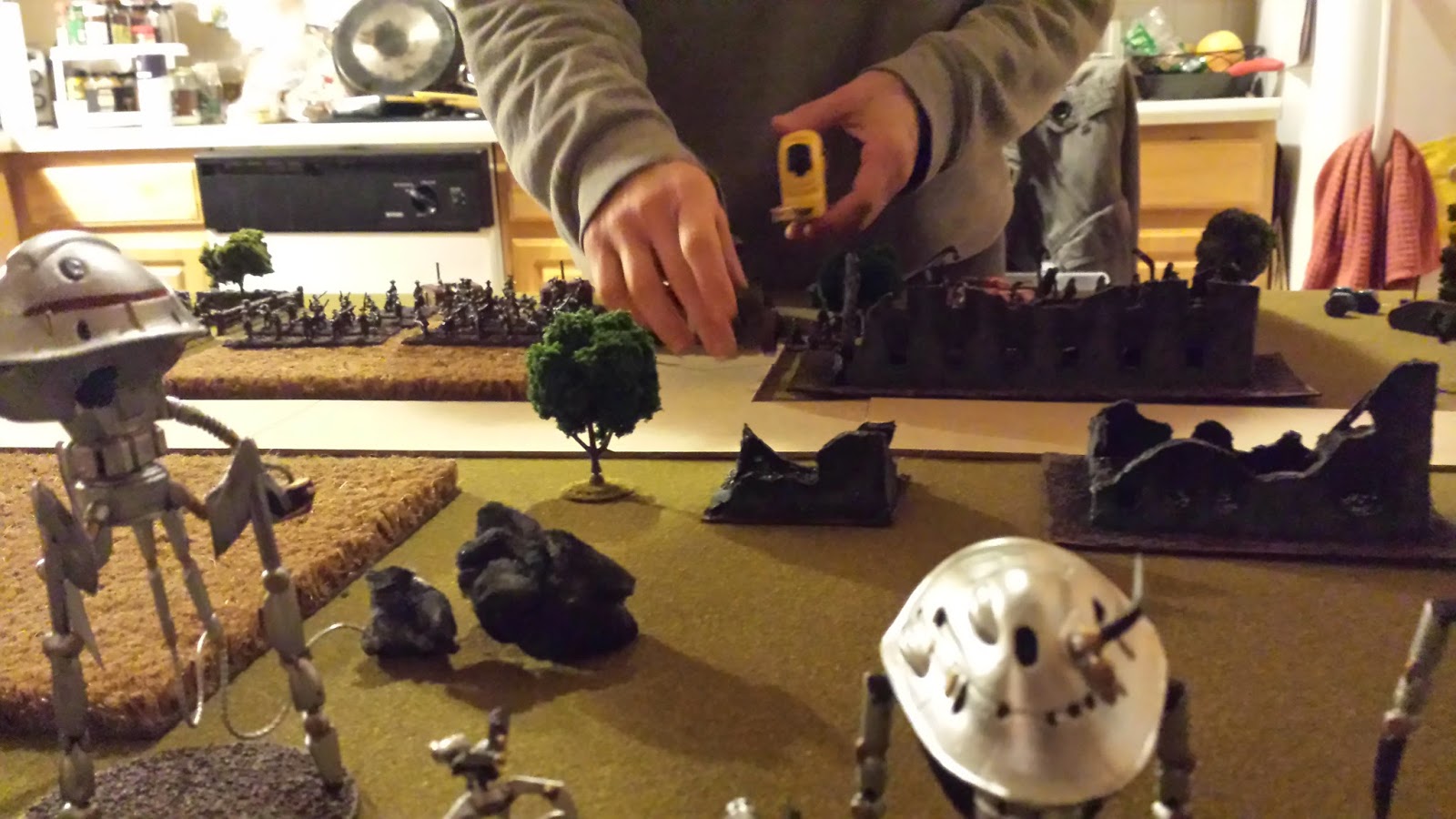 The Human counter-attack was fierce, with the artillery, mortar team, and MKIIIs targeting the lead tripod which remained in range of a fair amount of human forces. They managed to destroy it, giving themselves some momentum for the next initiative. 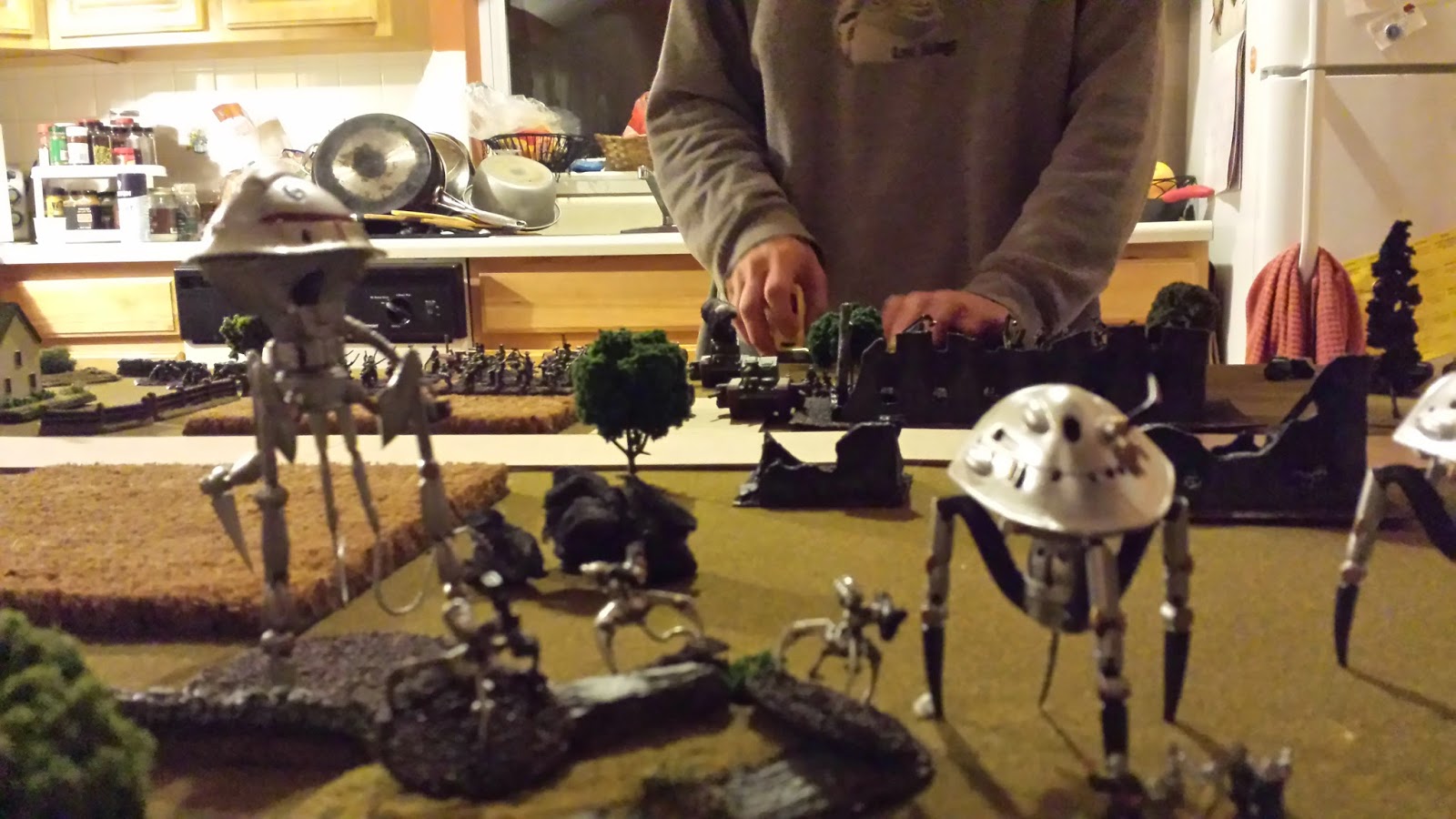 The humans got two turns in a row, but only managed to damage some tripods and kill some lobototons. I recognized the expression on my wife's face. The momentum had slid away from her and she was feeling the difficulty of penetrating all that Martian armor. It was a feeling I knew well. 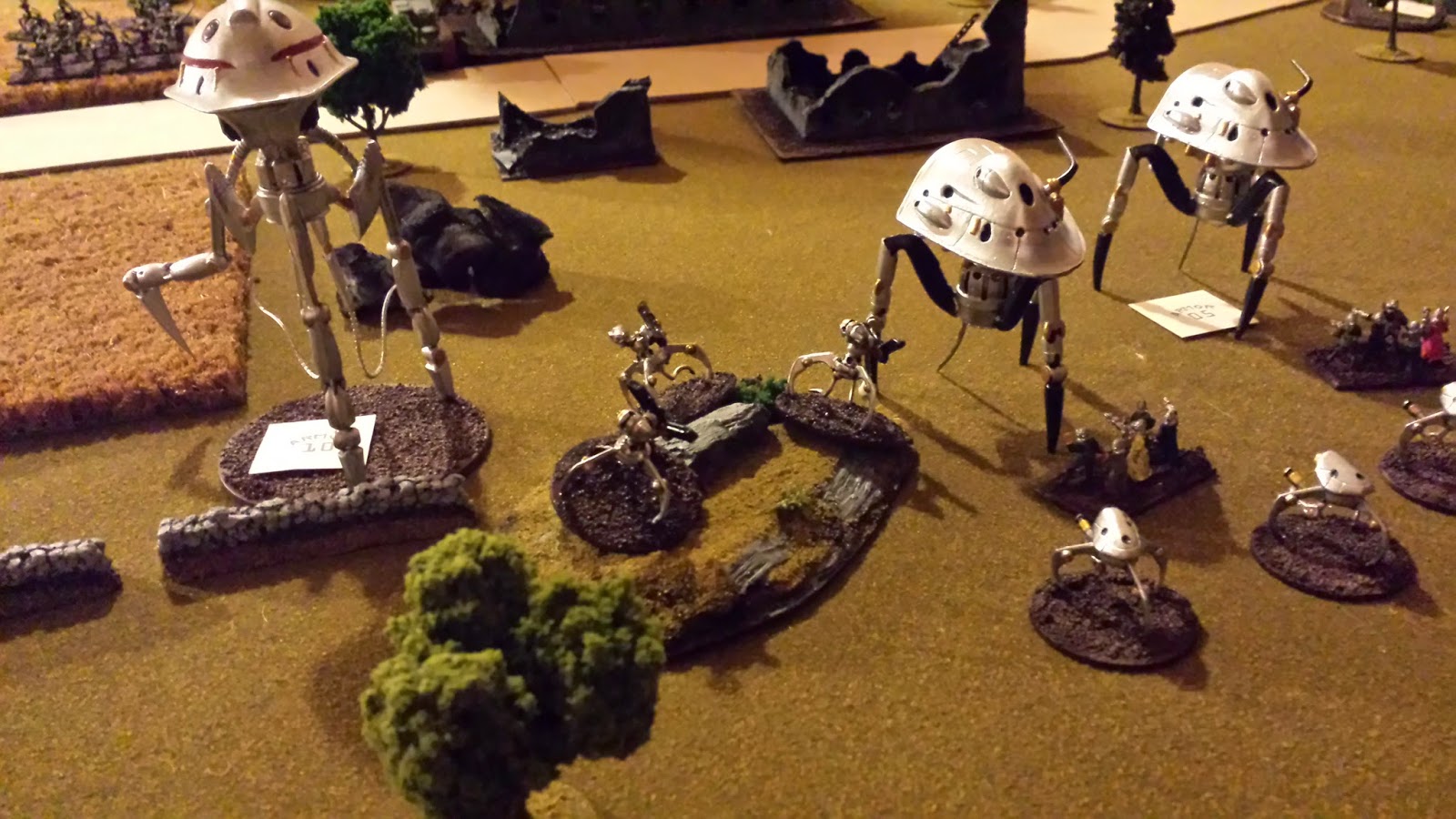 Meanwhile, she began turning the forces on the far left out of cover. The tanks were significantly slowed down by having to move through the heavy trees, taking several turns to come into range, and the two units of infantry down that way didn't make it into combat until the very last turn. 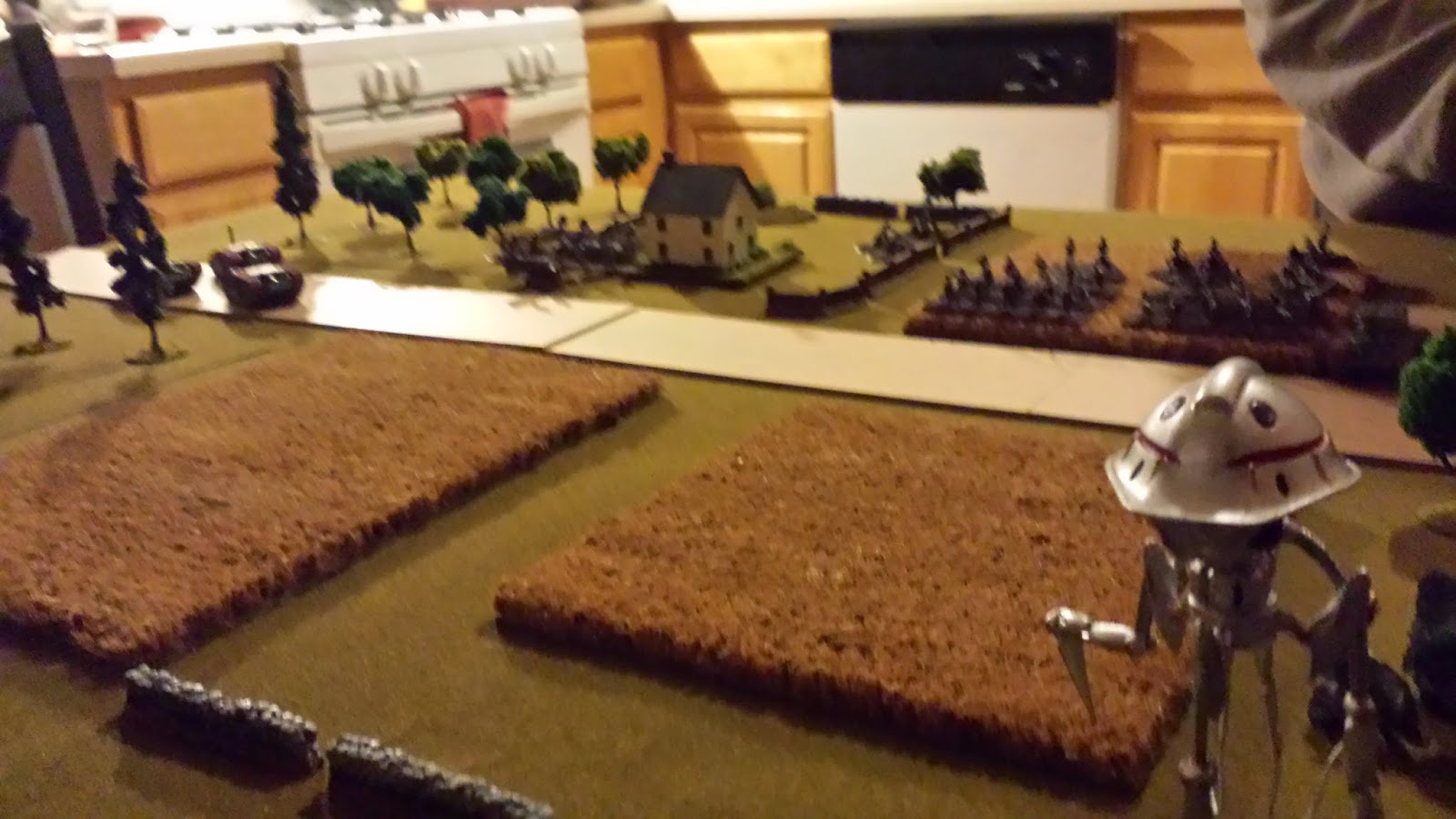 On my turn, the Martians finally broke through.  The shock drones took up solid positions in the ruins, and routed both the infantry and HMGs which had taken up positions in the factory across the road. Meanwhile, the remaining tripod that was marching up center swept its heat ray across the MKIIIs, killing one and routing the other. On the 2nd move, the tripod rushed up within 3" of the last MKIII, turning the unit from a rout to a casualty. 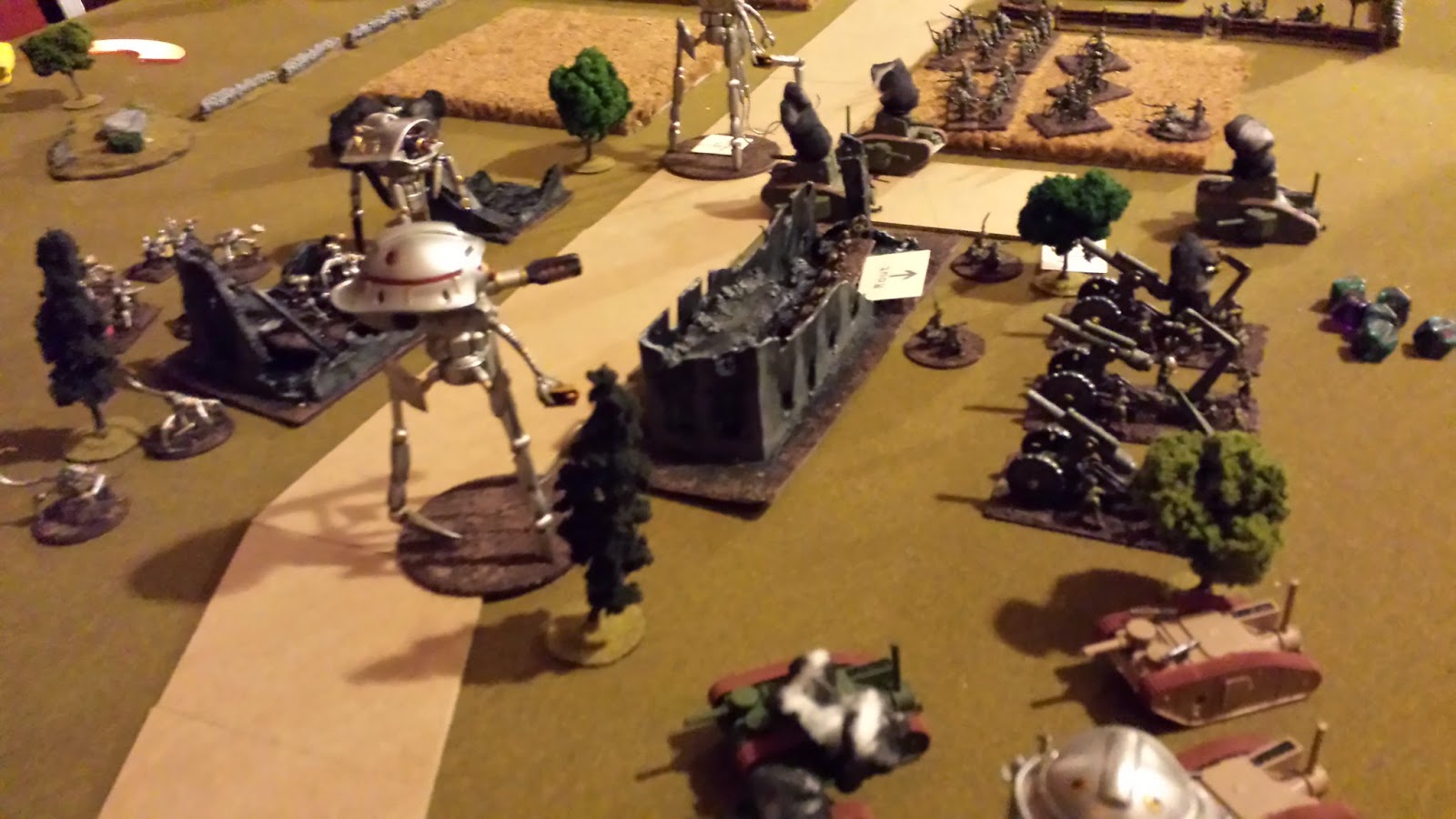 It was at this point that my wife began to get angry.
"This is because I'm playing the piddly humans", she said through gritted teeth, "damn cowards!" She continued to rail against the cowardice of the human race throughout the rest of the game, cursing the pathetically frail human forces that she was supposed to be commanding. 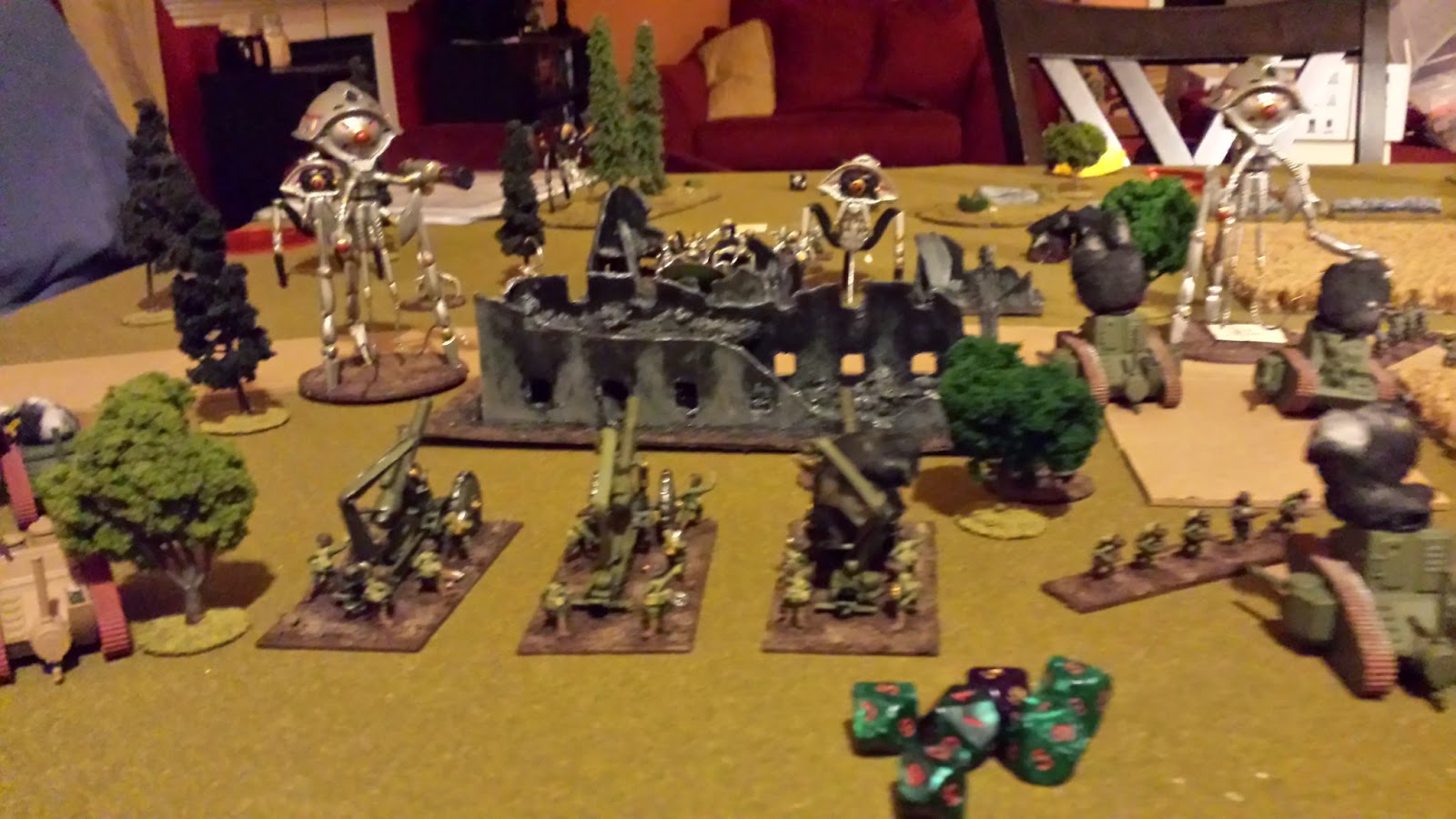 The next round, I won initiative, and finished off the Heavy Artillery with a sweep of a heat ray. The forces at center were having a less... efficient time. The black dust tripod on that side had been destroyed early, and the humans were proving difficult to hit in the corn fields.  When the humans counterattacked, the US Infantry was finally in range to assault. She immobilized the lead tripod with the rough riders, and then rushed 4 units of infantry (including 2 forlorn hopes, just visible in the image below) into the assault. 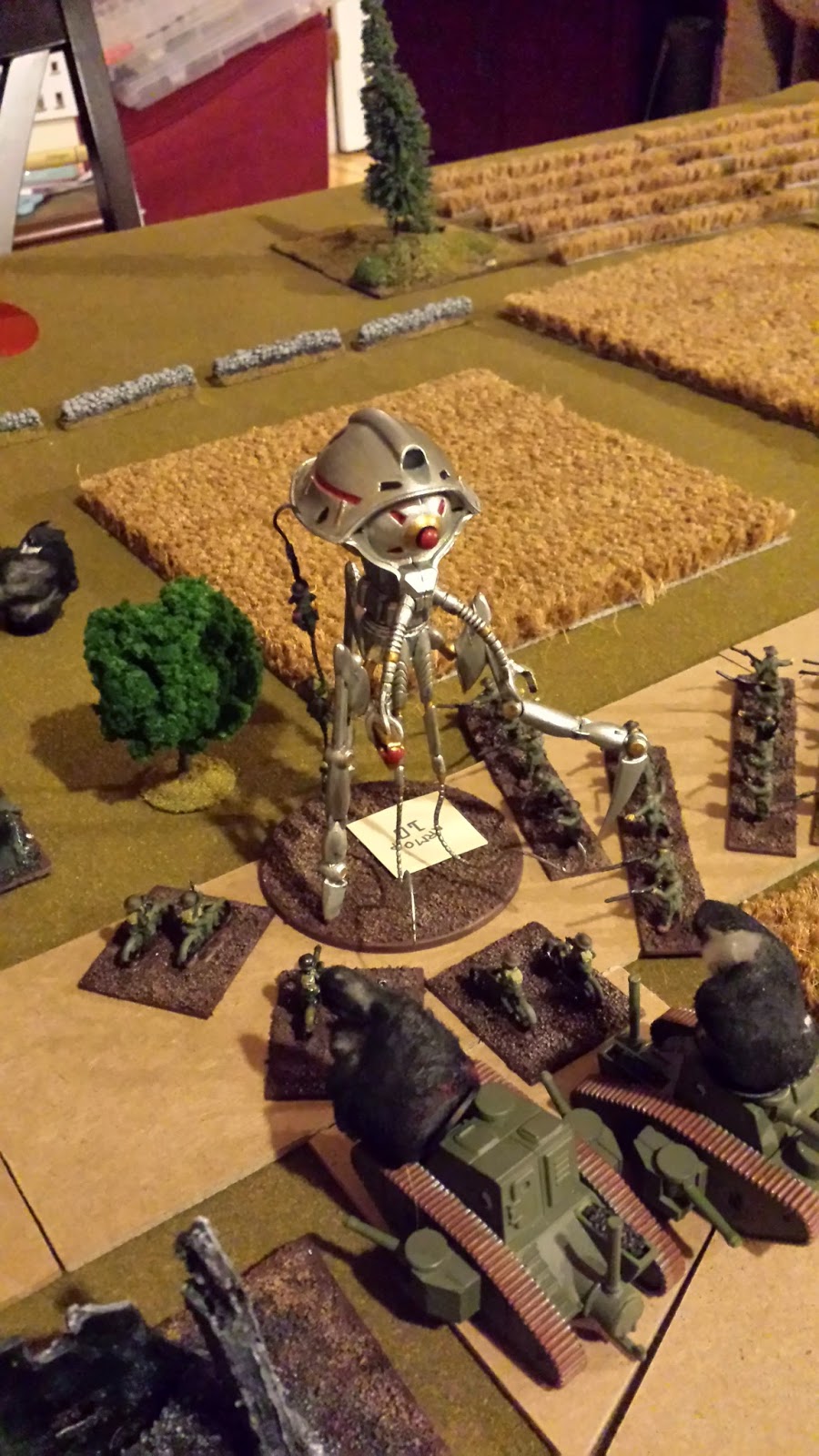 Tanks roared, mortars thumped, and grenades exploded, but when the smoke cleared, the tripod still stood, its armor stripped down to 6.  The humans won the next initiative, and threw all they had against the tripod and a slaver that had joined it on the road.

Then came the roll of the night. The (rallied) heavy machine guns opened up on the tripod after the infantry and tanks had further reduced the armor to 4, and scored 6 penetrations on the damage roll. That's a 50% chance of an exploding tripod! Not that it mattered really, as she rolls a 10 on the Tripod damaged chart anyway, causing it to catastropically explode.

But even as the tripod fell, it was clear that she would not be the one to benefit. Clustered around the exploding tripod were her rough riders and three units of infantry, all of which perished in the blast, breaking her army.  The Martians meanwhile had lost only 2 units total (and several partial elements of drones) and were the clear victors.

My wife is now even further disgusted with the cowardice and weakness of the human race than she was before. She is (if it is possible) even more committed to the Martian cause than ever before. Somehow I don't think we'll be seeing her play the humans again for a long, long while.
Posted by Unknown at 12:08 PM