This scenario was epic, one of the most interesting and challenging games of AQMF I've played.  I introduced my good buddy Jamie to the game a few weeks back, and he's been itching to get another game ever since. We'd talked possible scenarios after our last game, and when I mentioned this one to him his eyes just lit up. He kept mentioning it over the past few weeks, so when he finally made it over, I thought I'd give him what he wanted and set up "The Convoy".

This time, he brought his girlfriend Sabrina, who is completely new to anything like this kind of game.  I set up a quick scenario for the two of them so she could learn the ropes, and she stomped him into the dust. Then we moved on to the big game.  After winning with the Martians, Sabrina wanted to try out the human forces, and Jamie also naturally wanted to play the Americans (his favorite force) in this very difficult scenario.  We split the Americans into two groups, while I commanded the Martian force. Background: After the recent Martian incursion into the Mississippi Delta region, a strong column of reinforcements has been rushed (perhaps a little too quickly) into the difficult and sparsely populated area. The last reports from the region suggest a serious Martian attack, and that the US forces in the area were in retreat. The convoy of American reinforcements raced to the front to hold the Martians at the Mississippi, but arrived far too late. The human defenders have been scattered and the few survivors pushed into the bayous. The reinforcements from Vicksburg march down the muddy road to Mayersville, set into a narrow strip of land between two marshy rivers. The column is slowed by the muddy road, tragically bunching the line at a vulnerable moment. The commander's worst fears were realized when, amid sounds of splashing water and breaking trees, massive tripods rose from the swamps on either side of the column. It's a trap! 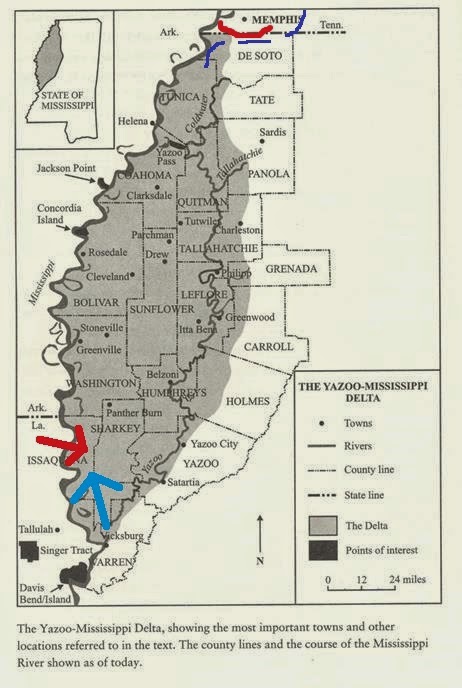 The Scenario:   Realizing the trap, the Battalion commander has given the order to withdraw.  The human objective is to pull their forces out in the best order possible, or failing that to drag as many of the invaders down to hell with them. For the Martians the objective is to destroy the humans completely, preventing them from regrouping later and to diminish resistance to the Martian advance into the Delta.

Yes, the Americans are completely fucked here. This isn't meant to be a "balanced" scenario, just an extremely challenging one for the American underdogs. I'd love to see if other players can do better than we did. If you do, let me know in the comments!

Deployment: Humans deploy entirely on the road, 12" from either edge, all facing the same direction.  For our games, a unit of MKII tanks is seeing dual use as a tow for the Heavy Artillery and regular tank group once they detach. The Martians deploy next, 6" from either edge on both flanks of the road, in any proportion they like.
Once the Invaders are deployed, the humans must choose which direction they intend to exit their units. They can press on into the swamp, intending to wheel on their enemy once in proper order, or they can fall back to Vicksburg. Either way the chosen exist is thereafter the only way out.  After this is announced, the humans are allowed one movement phase for free, as the tripods are far too massive to completely take the humans by surprise. They have just enough time to dive for cover.  No shooting though, not even the usual pre-game bombardment with the artillery.

Score: This isn't expected to go well for the humans. They are in a terrible position. I mean, look at that again: 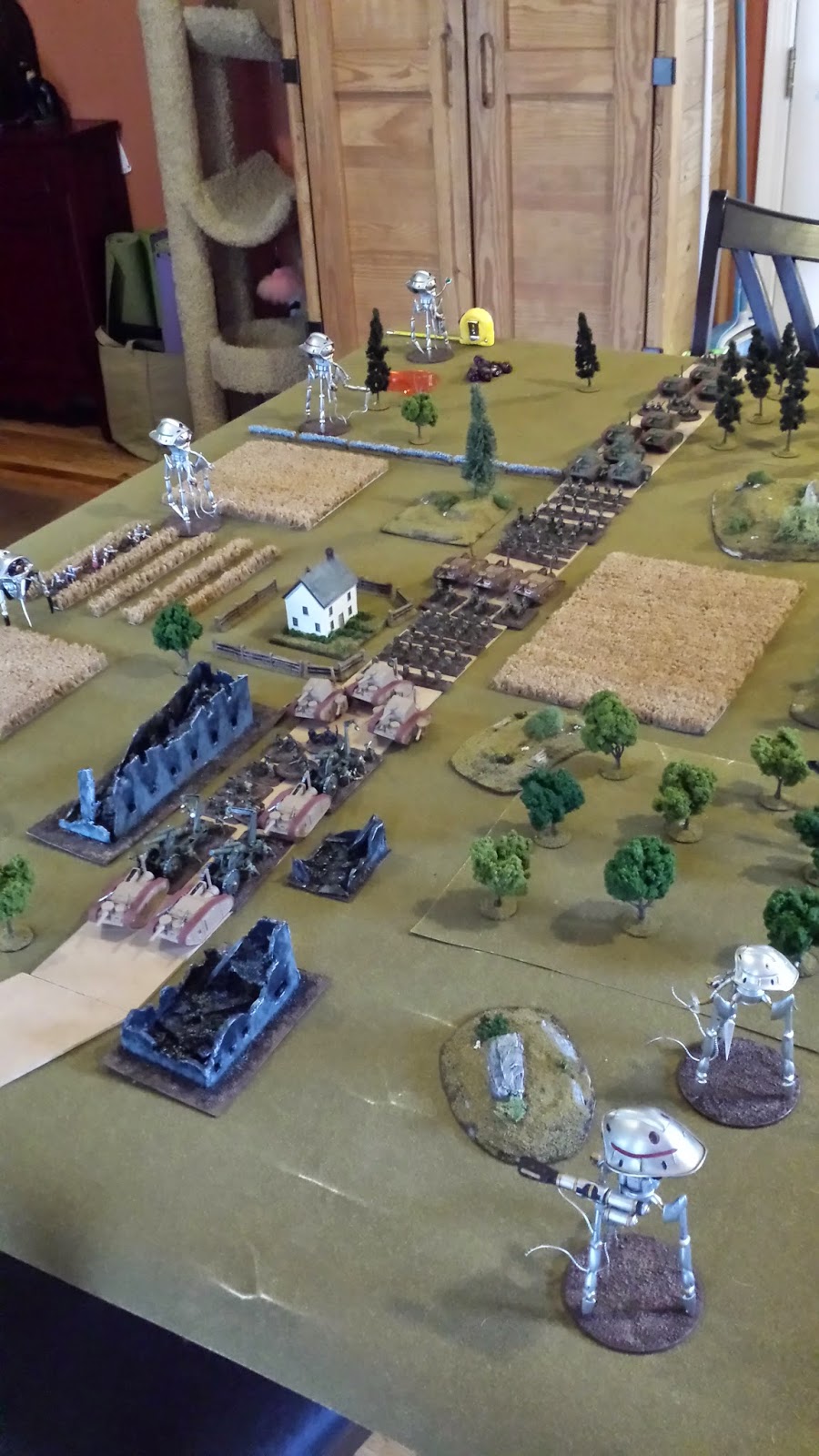 Just awful. The Martians will be immediately in range with just about everything.  So, the only hope is to get the hell out of there. The humans get a point for each unit that escapes out the "exit" table edge (routed units are casualties though). They also get one point for each enemy unit they take screaming to hell with them. The Martians only get points for kills.

We ended up playing 2 games with this scenario, as after the first game I wanted to try my hand at salvaging the human position as best I could.  Unfortunately, my phone seems to have malfunctioned and I lost about a dozen pictures. Inferior human technology...

First game: Jamie and Sabrina as humans, and myself as the Martian Doom. Jamie takes the lead group, and Sabrina the rear. Their forces are exactly split, with the exception of the Heavy Artillery which Jamie took and placed in the very front of the column. Generations of military strategists are turning in their graves as I write this, but it doesn't actually pose a problem in this scenario. Although it might explain why the column is so bunched up! 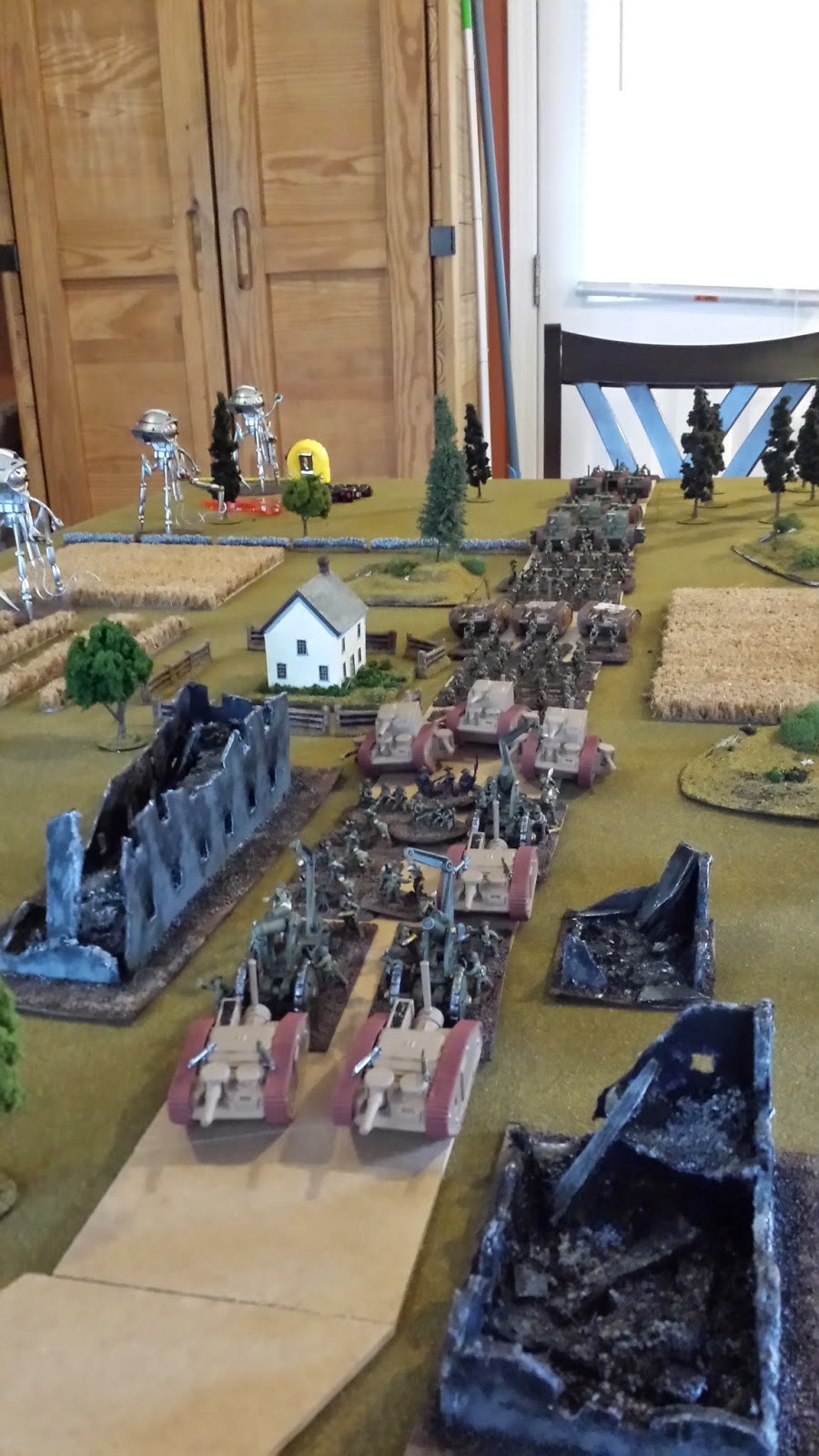 I split my slavers and drones and placed them in cover on each side of the table, and distributed most of the Tripods evenly, not knowing yet which way they would choose to flee. 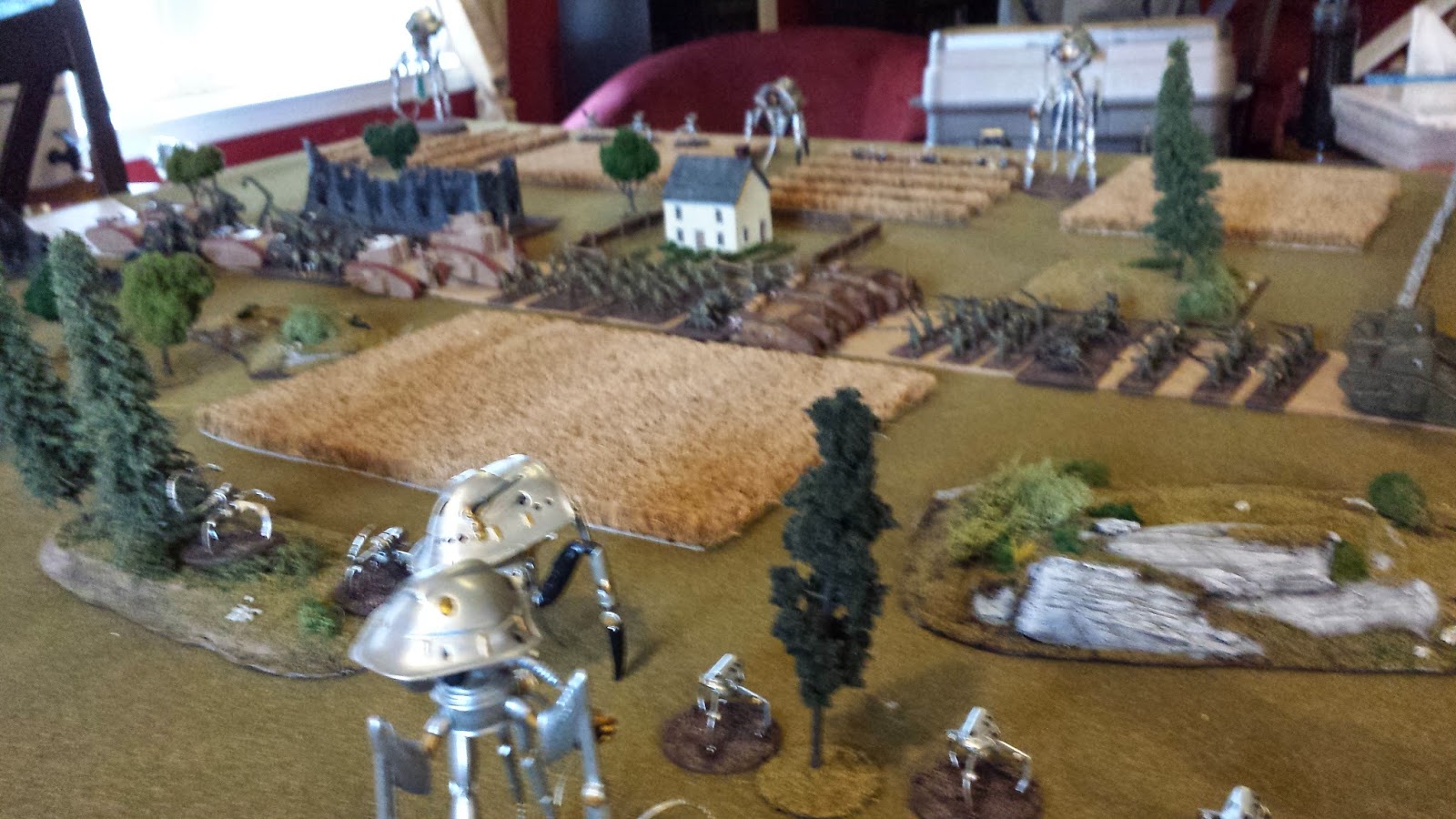 The humans choose to try to push forward, rather than falling back to Vicksburg. With their free move, the humans rushed into cover on either side of the road, and a good thing too, as the Martians won initiative for the first turn. The drones pushed forward, rushing into the fields. 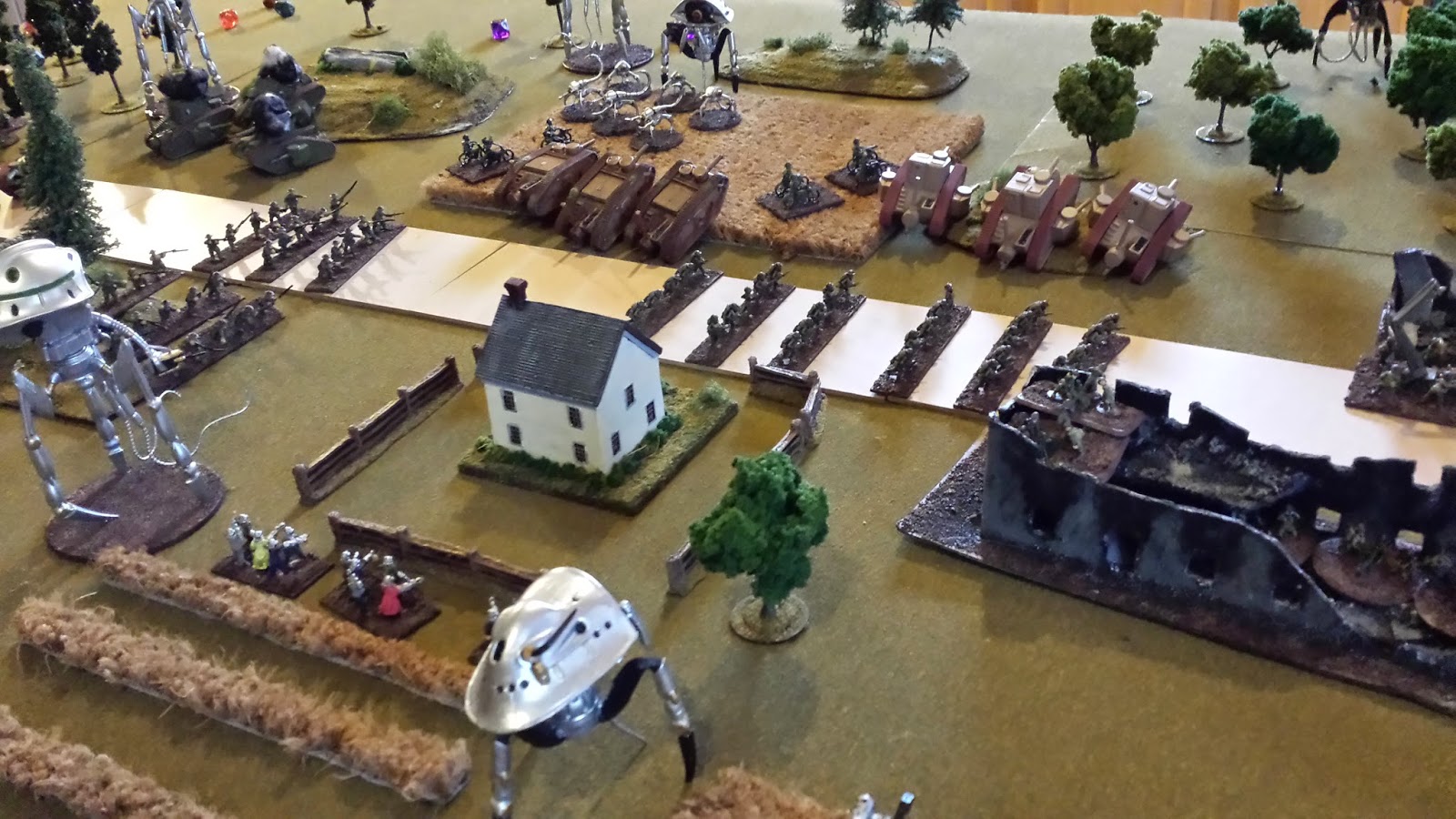 Two assault tripods and a scout cut off the human escape, frying the Artillery and using Shock drones and their black dust to clean out a cluster of troops taking refuge in the ruined factory. This attack claimed a mortar unit, and crushingly Jamie's command unit. Forces on the opposite side of the table also used black dust to annihilate Sabrina's HMG unit and her commander as well! The humans lost all of their orders on the first turn, without having a chance to use even one. This made the odds of a human victory very, very small. Ouch! 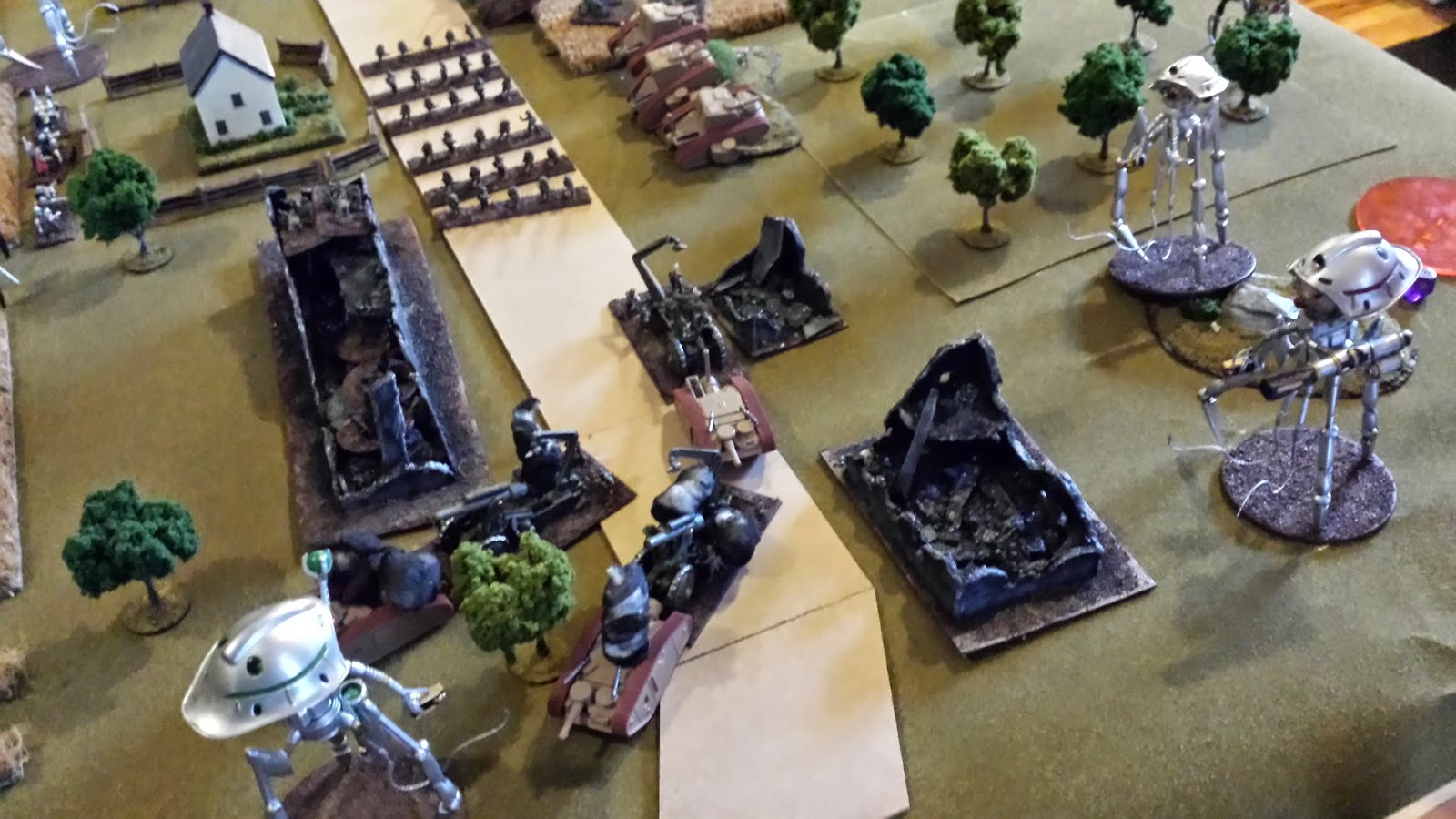 The humans counterattack. The tanks flee from the scorpion drones, making a desperate dash for the exit, while two full units of Sabrina's infantry wheel and assault a Tripod, nicking a point of armor off. 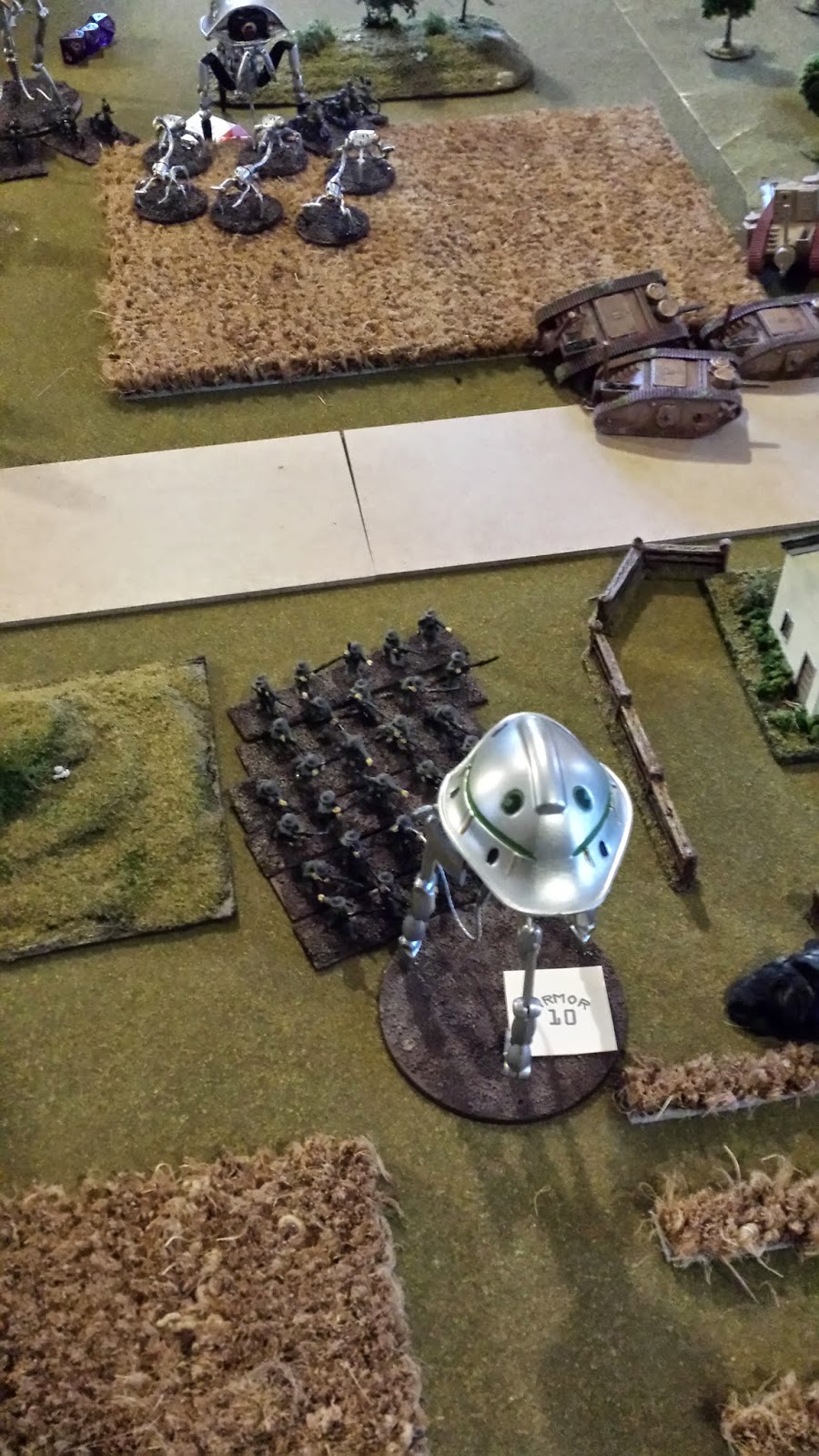 Rough riders emerge from the corn fields and immobilize a Slaver Tripod and fail to immobilize a scout. The fleeing tanks take shots at the immobilized slaver, reducing its armor slightly. 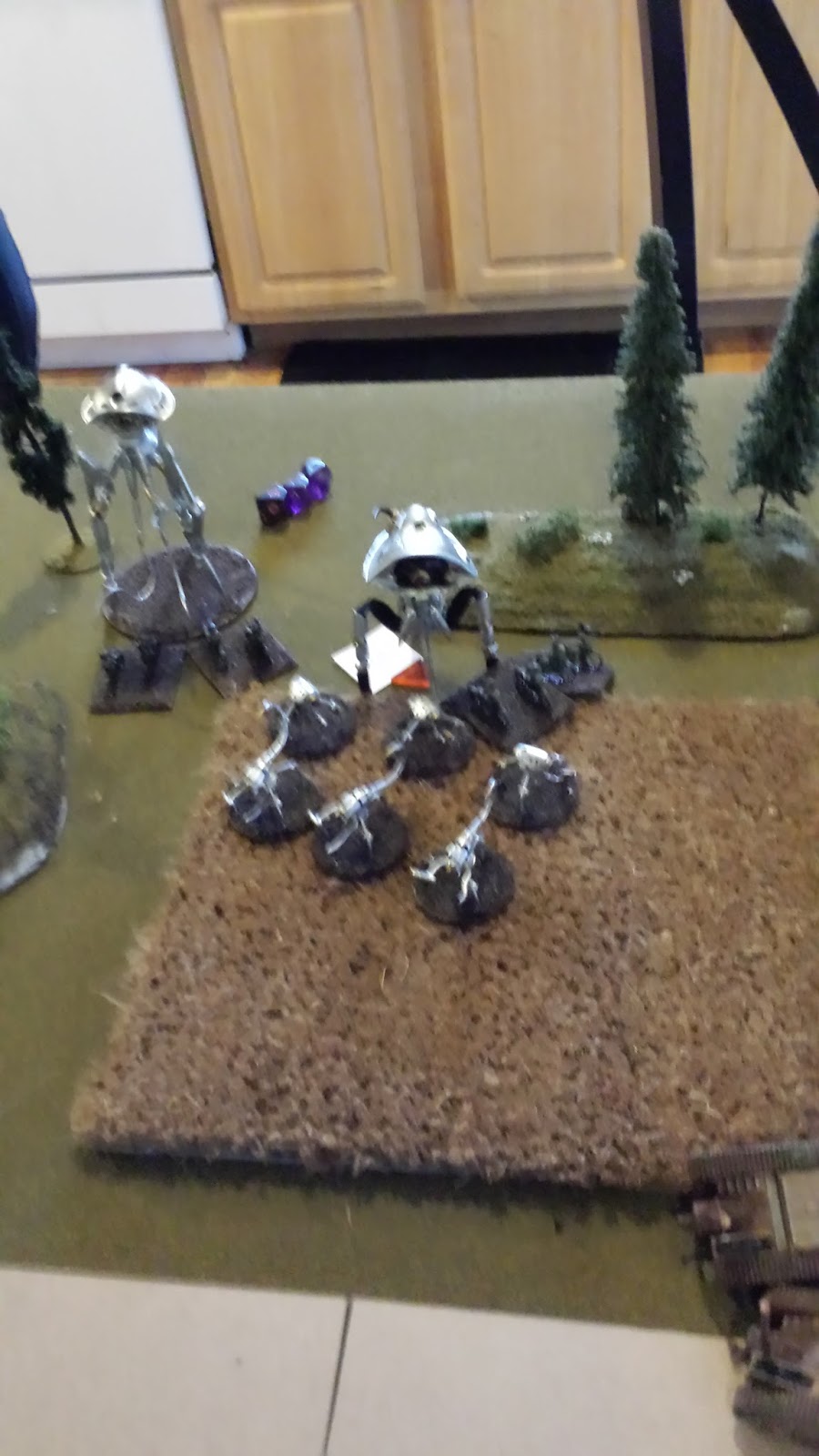 The MKIIs flee, and the MKIIIs stay close to cover to offer support, but without orders to double their movement, the table edge might as well be twenty feet  rather than twenty inches away... 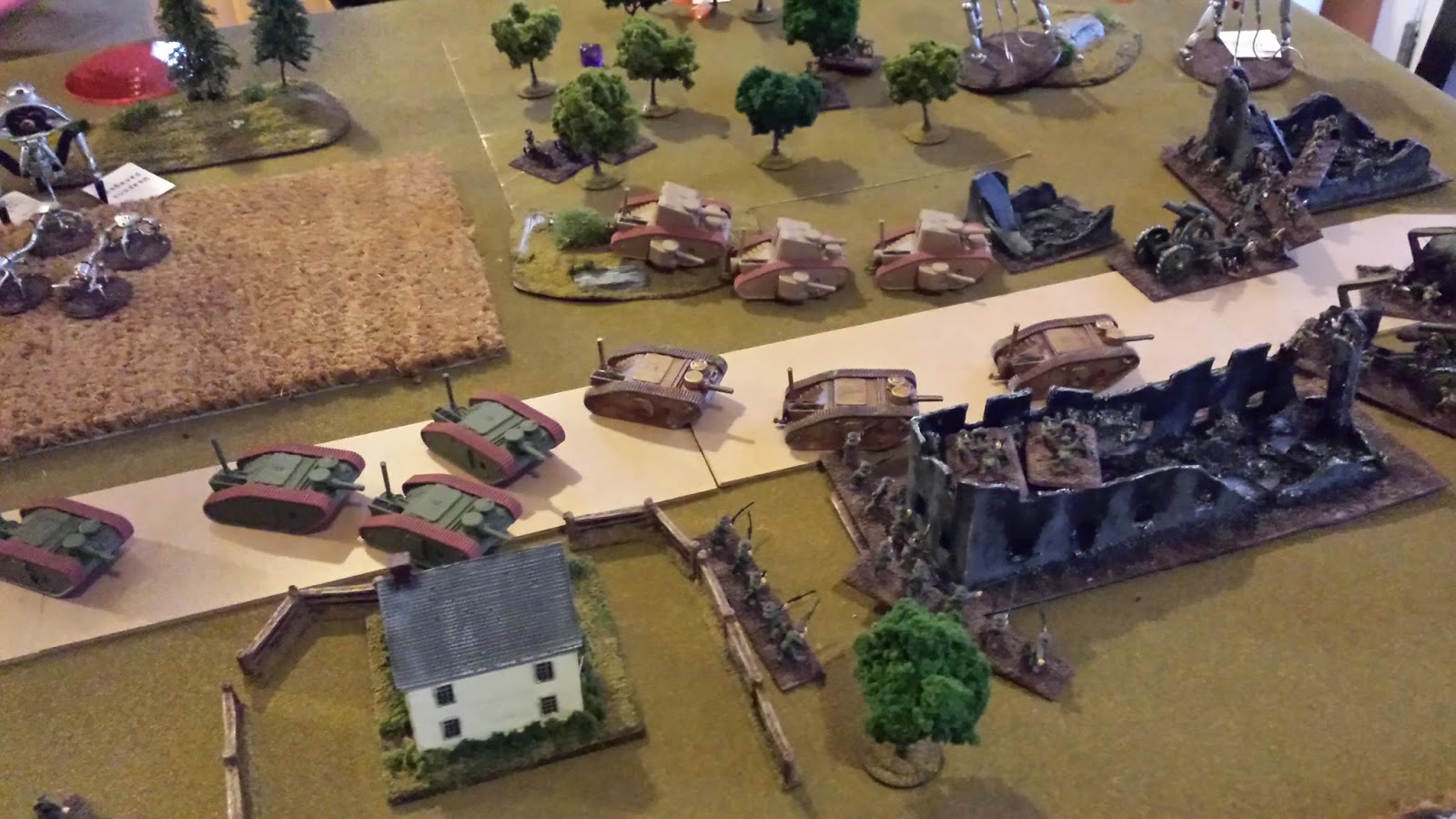 Sadly, the remaining pictures from the first game were mysteriously lost. But the next initiative saw the Martians with momentum (-2 to the human roll for the lost commanders), and turning the withdrawal into a route. It went into the third turn, with the humans winning initiative, but with so few forces surviving the Martian attack the scattered forces could neither effectually attack the Martians, nor reach the table edge safely. It became obvious that there was no way the humans could come back, so we called the game there.

This just made me all the more excited to try the human side. I just had to see if it was even possible for the Americans to win this scenario.

Game Two: I deployed slightly different from Jamie and Sabrina. Assuming that the Artillery would be lost quickly, I left the battery at the rear, hoping the Martians would send strong forces against them, leaving the forward position open (I had already chosen that as my exit, although hadn't announced it yet). I backed those up with slow-moving Mortars and a command unit, and assumed that none of them would make it out alive.  My hope was to tie up as many Martian forces at the rear as possible, leaving the forward position less defended.  I also pushed as much of my infantry, HMGs, etc as I could fit towards the front of the line, with tanks dotted throughout so what I was doing hopefully wasn't too obvious. 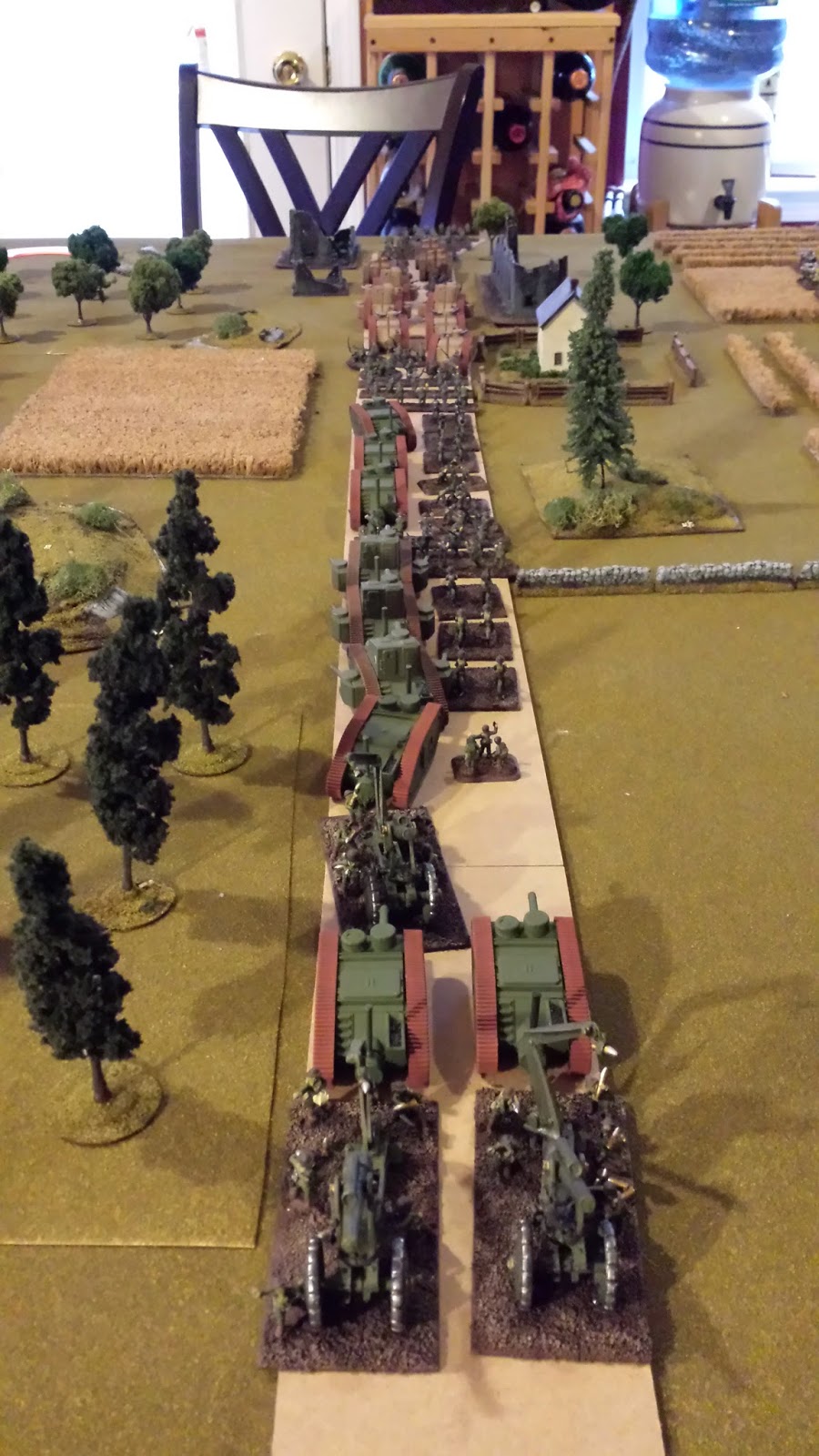 Jamie and Sabrina decided to divide the Martians up such that Jamie got the slavers and drones, while Sabrina got the grenadier and an extra scout.  Otherwise they were exactly even.  I suppressed a smile when I saw Jamie weight his line towards the artillery at the rear. 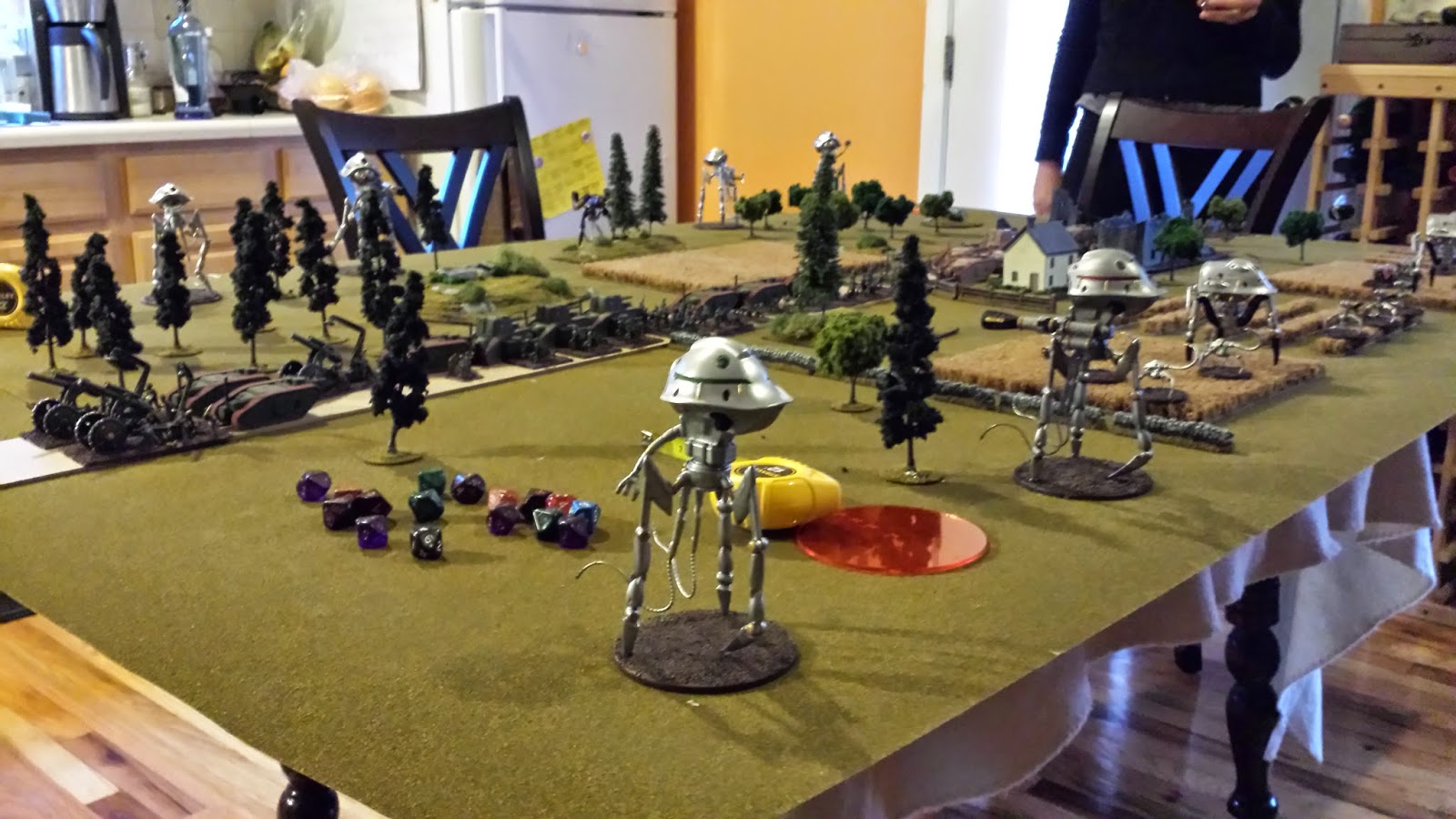 The humans' free move: I rushed the forward soft targets into cover, but left my commander out of line of sight, not wanting to give Jamie's shock drones the same target he'd given me. Otherwise the deployment looked rather similar to Jamie and Sabrina's in the previous game. 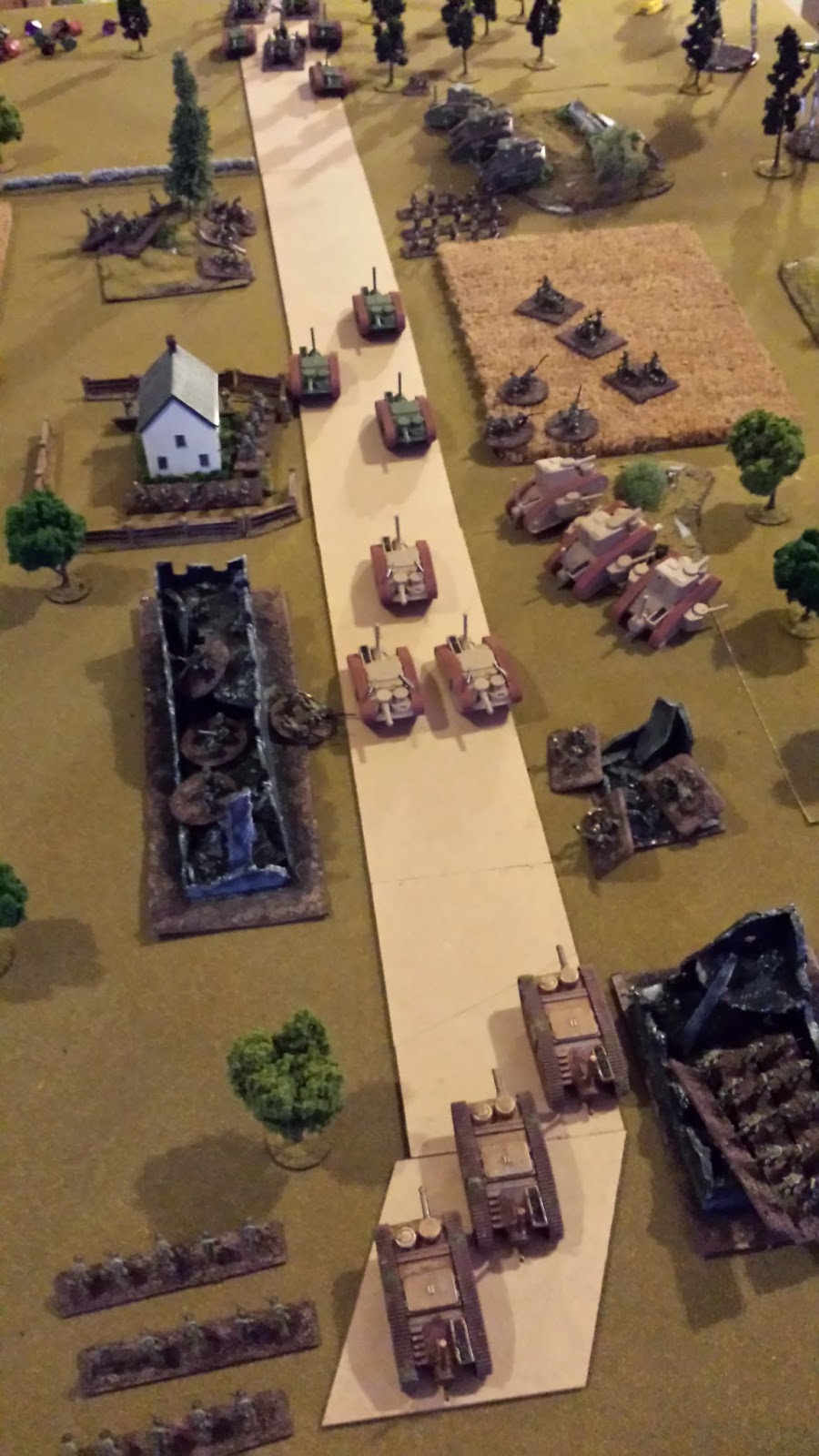 The Martians again won the first initiative, and it really hurt. On the free move I'd turned my guns to have a long field of fire, and detached the MKIIs towing them, but I didn't even get to fire them once. They were instantly heat-rayed and routed, and naturally Jamie used a move order to rush up and destroy them on the second movement phase. My heart sank a bit at that. I knew they were lost, but I had hoped they'd tie my opponents up for more than one turn. 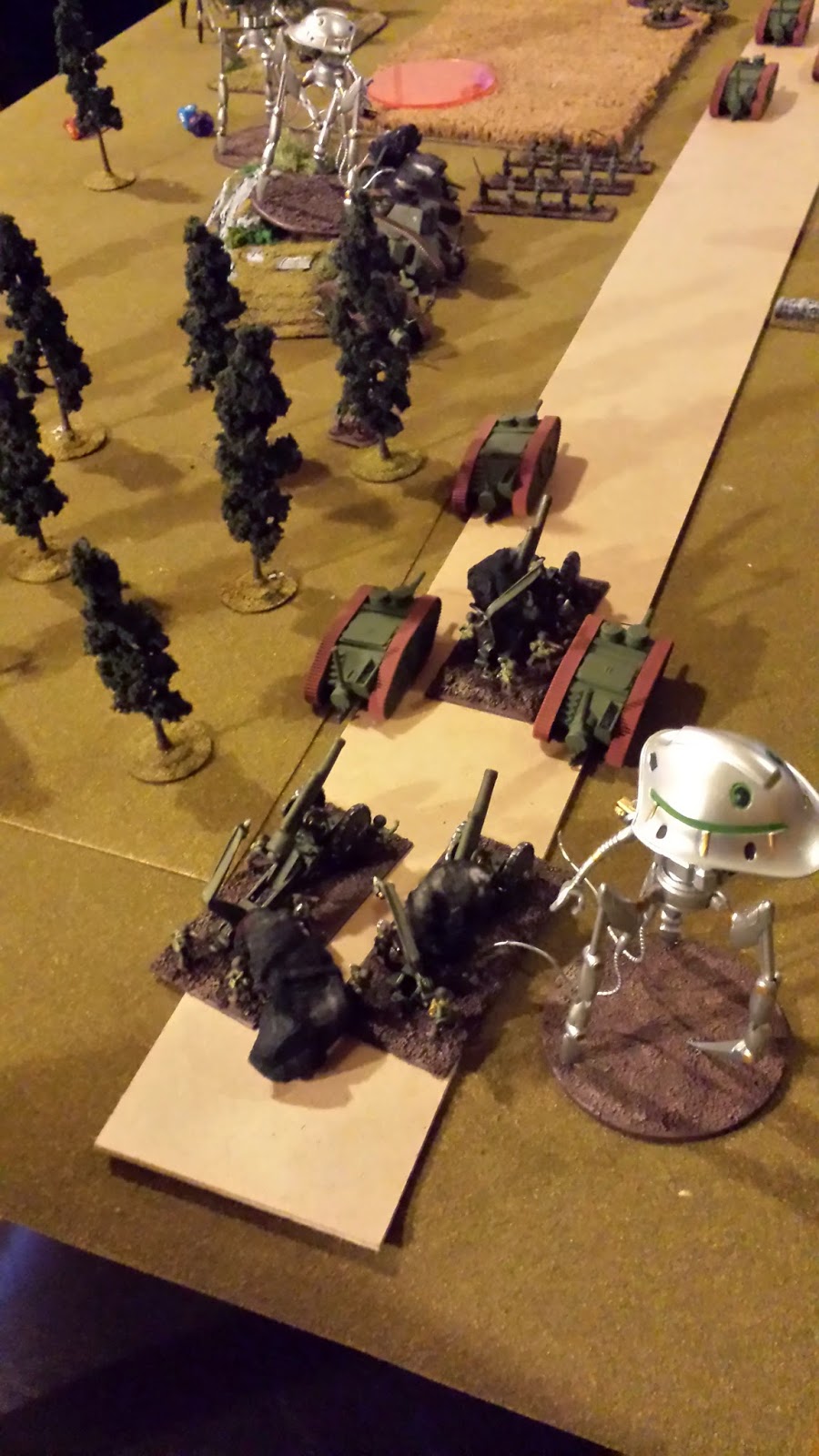 Sabrina rushed in from the other side, frying a unit of MKIIIs and then rushing the routing units with a scout. 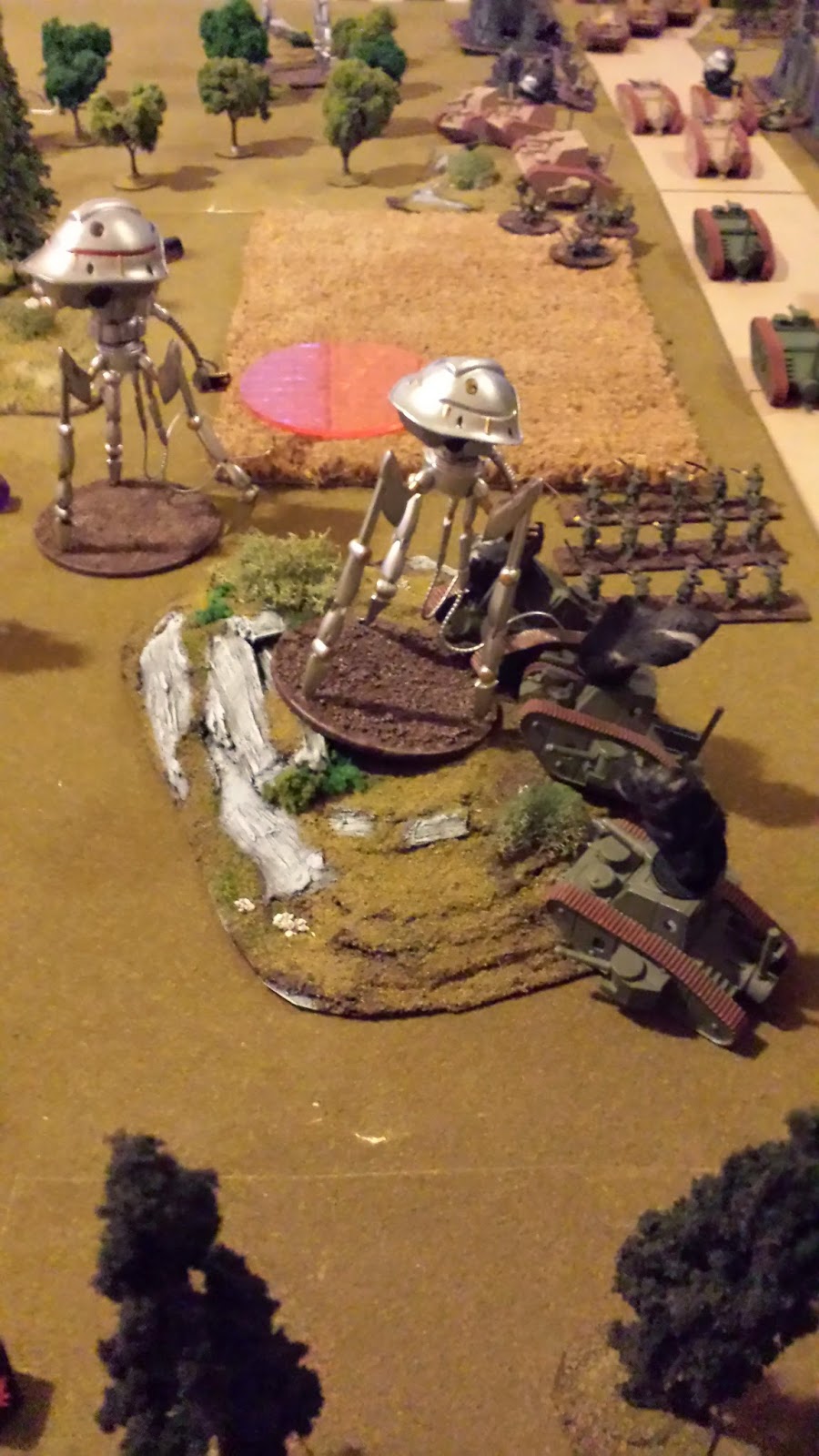 On the human's first turn, I used almost all of my move orders to bring four units immediately off the table edge, and to bring several tanks very close to the edge. A combination of mortar and machine gun fire took out a unit of drones, which was the only Martian casualty this game. Then, apparently, more pictures mysteriously vanished. But what you're not seeing is several other units making it off the table edge on the next turn, even as the remaining tanks were destroyed.

The last turn became a desperate retreat. With no tanks remaining (either destroyed or escaped), only two separate elements of mortar units, a commander still hiding alone in the woods at the opposite table edge (to keep my orders, as my main commander had withdrawn), and a HMG and Infantry unit pushing towards the exit, the humans went into the round actually tied with the Martians. However, I was out of orders.  The Mortar teams and Command unit were impossible to save (as I only give mortar teams 4" movement), so I concentrated on moving the infantry and HMG team into good cover near the back of the board. If I could keep them alive and win initiative, there was a chance I could pull off a draw, but not a win. Sadly... 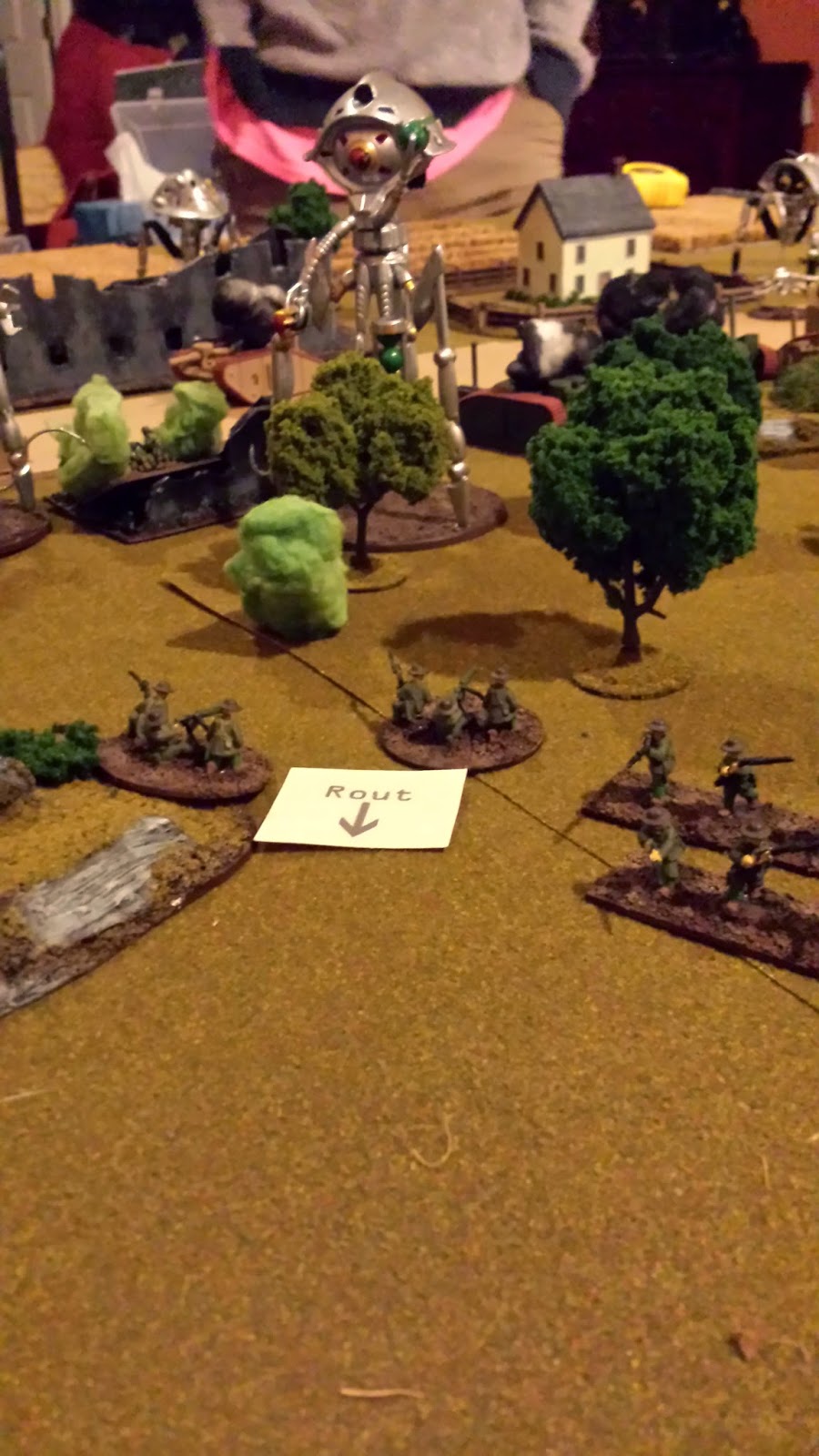 A Tripod emerged dropping green gas on the HMGs, routing them (and then naturally destroying them with a move-ordered advance). With that loss, it was impossible to win, so we called the game.

Much closer this time!  Martians claimed 10 kills (including the mortar teams and commander, assumed lost) while the humans scored 9 (1 kill, 8 units escaped).  A very, very challenging scenario.  It is definitely possible for the humans to win, but a lot of luck went into it.  I think if I'd won the first initiative, I might have squeaked out a victory, and there were a few other turning points (routed units, etc) that could have gone either way. I definitely want to try this one again sometime soon.

Still, all in all, a sad day for the 29th Division.

Anyone want to take up the challenge of this scenario? If so, post your results in the comments!
Posted by Unknown at 12:16 PM