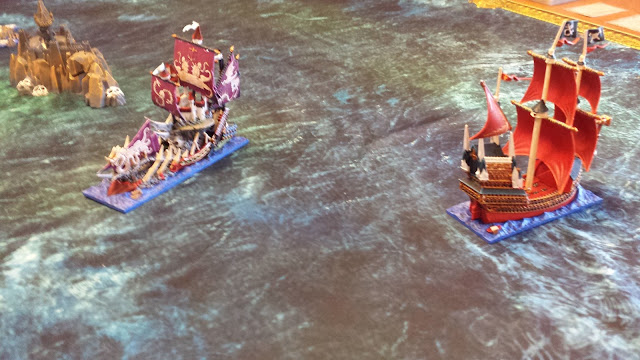 Headed over to my buddy Brian's place for some games this weekend, and found a real treat waiting for me: Dreadfleet, GW's 2-player naval game.  The 10mm scale miniatures are gorgeous, and Brian had them all professionally painted, as is his way, so they are just stunning.  And the game, a high fantasy style adventure in the age of undead pirates, is very fun to play.

For this game, I took command of the Imperial ship Heldenhammer and Captain Jaego Roth, while he took the Bloody Reaver captained by the vampire Noctilus and crewed by the dead. Looking at the ships the Bloody Reaver looked less than sea-worthy, being made of bone and pieces of other ships, but hey, magic man, magic. 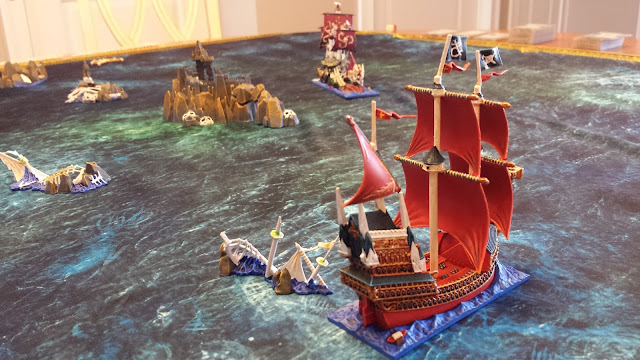 This is very much a game of maneuver, which I enjoy, and the wind speed dynamics mean you have to constantly adjust your strategy to account for changes in wind directions and speed.  We did a bit of dancing at first, but Captain Roth got the first shots, shooting long range broadsides raking the front of the Reaver. 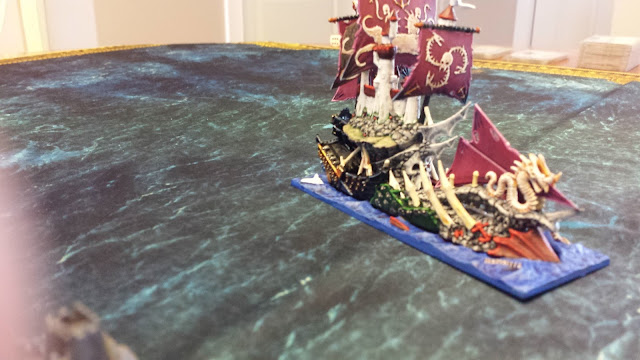 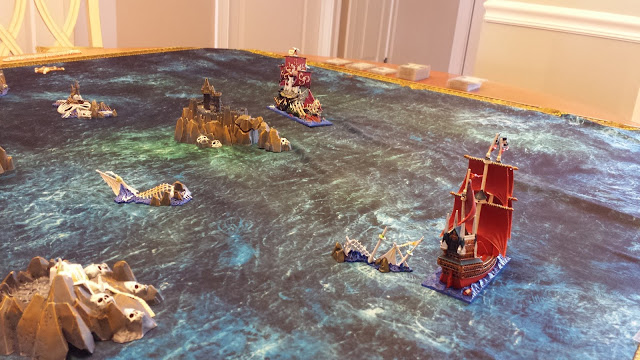 The Reaver turned hard to Port, bringing us out of each other's line of fire. 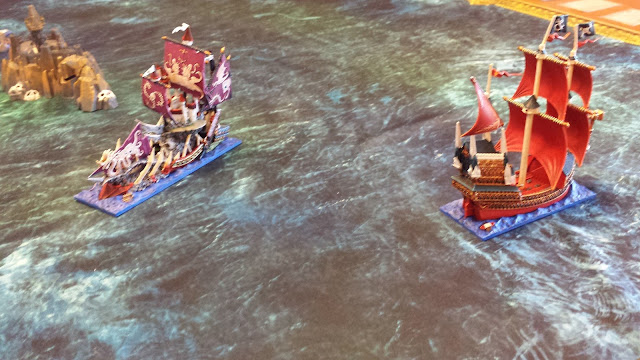 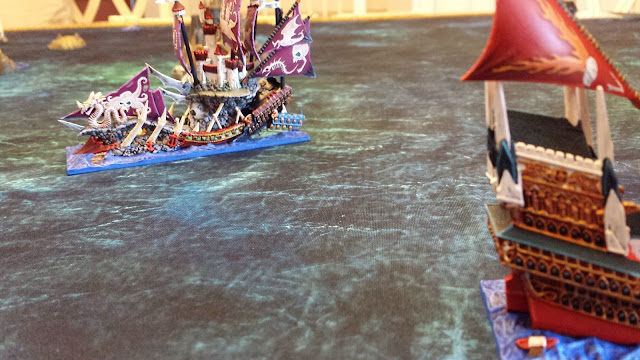 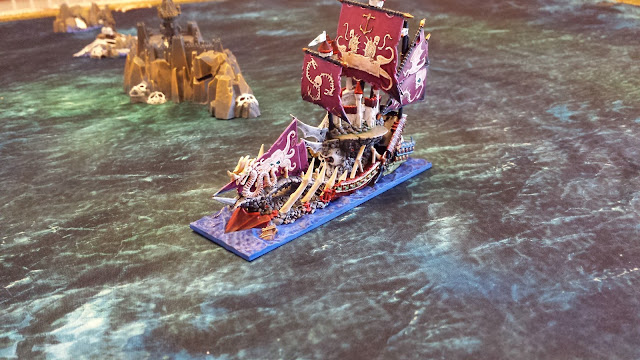 But then rose the undead sea hydra!  One of many random "Fate" events. 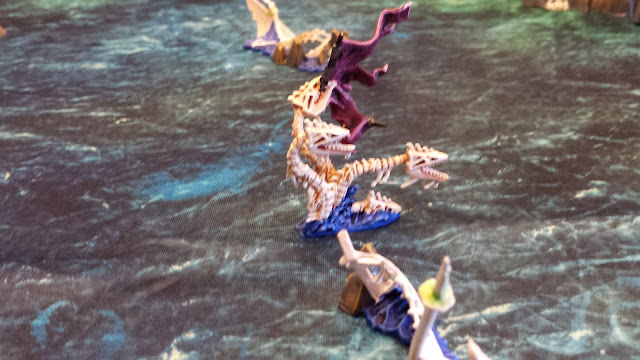 Captain Noctilus made a bit of an error in his course correction and got the Reaver stuck against a wreck, giving the Hydra a chance to approach and do some damage. 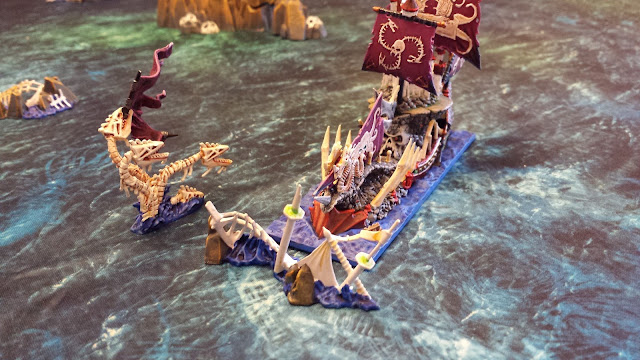 Meanwhile, having drawn a card allowing me to fill a cog (the tiny launched ship in the middle below) with oil, making a fire ship to launch against the immobile Reaver. 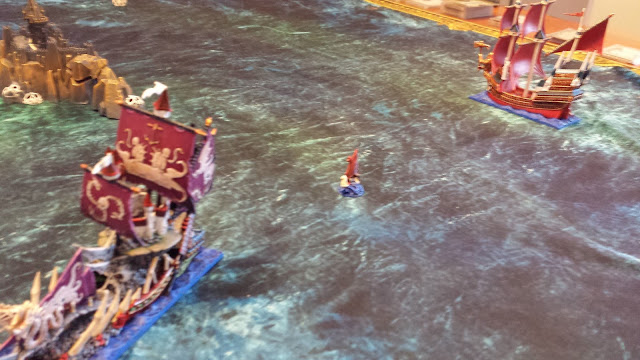 The Reaver, however, is not to be underestimated, nor is Captain Noctilus. He not only took magical control of the Hydra, sending it towards the Heldenhammer, he launched his own cog to attempt to intercept mine. 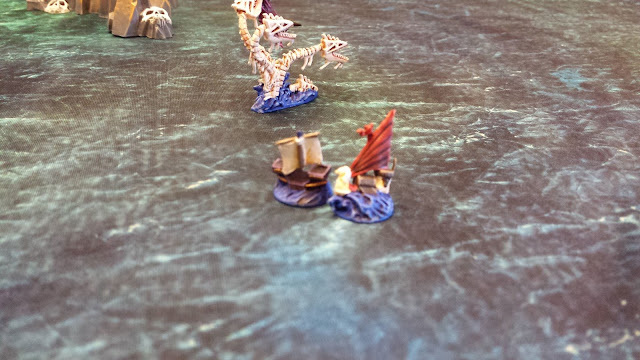 The cogs came to battle, their crews launching themselves on to the enemy decks. The boarding action was a tie, and we both took damage. The enemy took a hull damage, sinking the ship, while mine caught fire!  The crew was panicked - the deck was on fire and the hold was full of highly flamable oil! 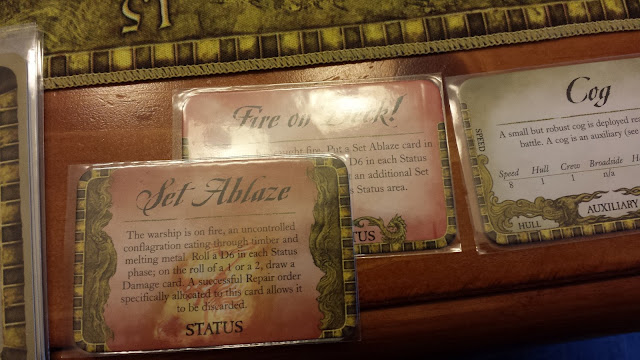 The cog would surely sink or explode next turn, but the crew was able to valiantly steer it towards the Bloody Reaver, which it managed to partially set ablaze. 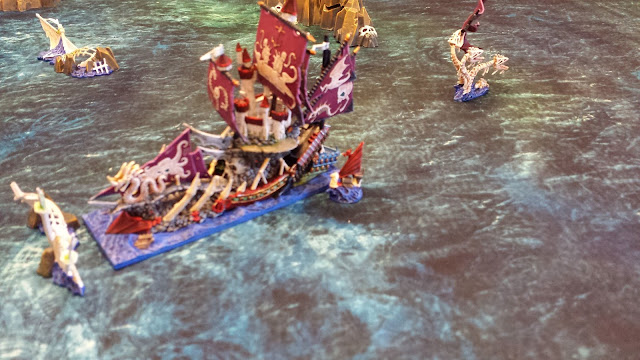 The Reaver, despite being ablaze used it's special ability to regenerate some damage, then extracted itself from the shipwreck, turning to fire its broadsides against Roth's ship. 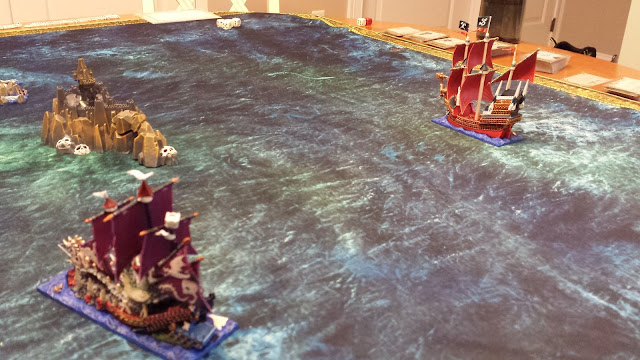 Meanwhile, the hydra reached the Heldenhammer, doing some damage and forcing the crew to waste shots on destroying it, shattering the bones and sending them back into the deep. 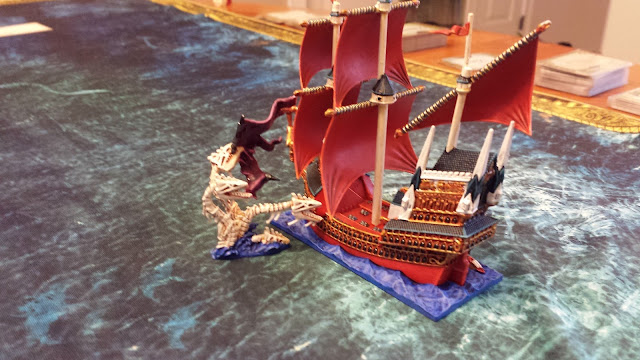 The heavy fire from the Reaver and the attack of the Hyrdra began to take their toll, seriously damaging the Heldenhammer. 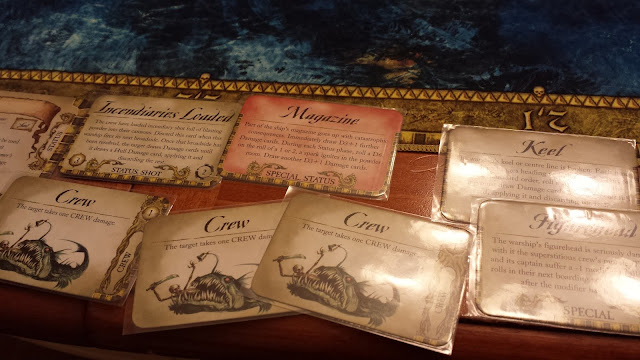 Captain Roth shouted "Hard to Port" over the din of cannon fire, launching his ship on a collision course with the Reaver.  The Heldenhammer's special ability is a steam powered figurehead that could smash the enemy's decks. I was itching to use it. 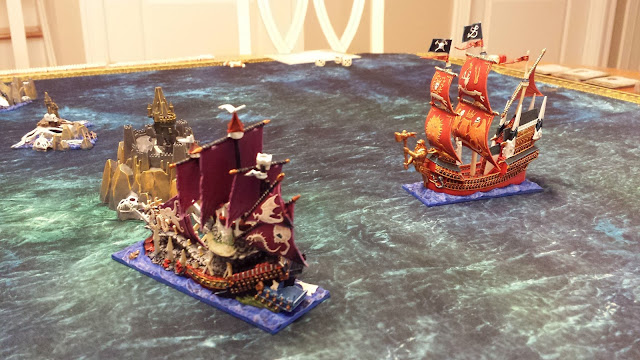 The Heldenhammer, reaching ramming speed, collided with the rear deck of the Bloody Reaver, just as another undead abomination emerged on the other side of the foul ship.  The damage from the Heldenhammer's steam powered hammer was catastrophic, and the boarding actions damaging enough to push the Reaver over the edge.  It was a victory for the Heldenhammer, but I'm sad to say that Captain Roth was mortally wounded by the vampiric Captain Noctilus as Roth personally led the charge.  Still, a victory for humanity against the Dreadfleet! 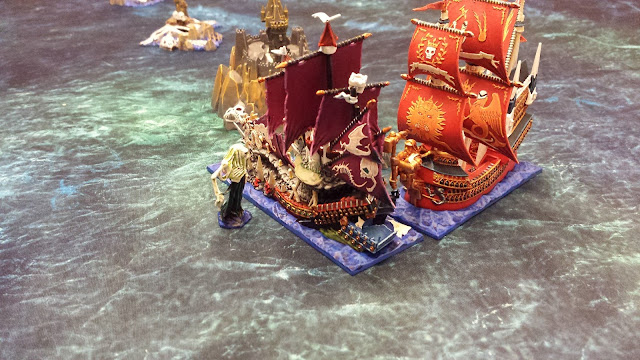