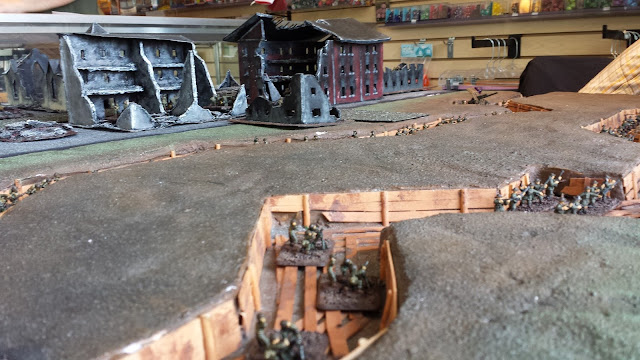 The Martians landed in late 1908, and from the start the Americans were outmatched.  Infantry riflemen, machine guns, and artillery could barely give the Martians pause, let alone stop their advance.  There were no tanks, no mobile artillery, no armored infantry, just men with bolt action rifles and hand grenades.
The first appearance of the Rough Riders in 1911 however, was a game changer.  It was a desperate move, rather than a calculated attack. The cavalry had been roping tripods for a year, but green gas and black dust destroyed the horses too easily (and no one has managed to make a decent gas mask for a horse), but the motorcycles turned the desperate actions of a few crazy cavalrymen into a crucial element of the armed forces. The MKI steamer had seen some action, but the MKIIs were just beginning to trickle off the assembly line, and those troops far from the factories of the east coast were slow to receive them.

This week's game harkened back to those dark days.  After weeks of small-scale Martian raids, American troops have prepared a line of trenches on the outskirts of Kansas City, hoping to stop the approaching tripods from destroying the rest of the town.  With the destruction of vital rail links back east, no tanks could reach this part of the front. Only artillery and infantry already on the scene would be deployed in a last desperate defense of the city...

An all Infantry and Artillery battle! There was some discussion on the AQMF forums as to whether of classic "wwi" style list, in other words, without tanks, was a feasible possibility. I've been curious about that for some time, but just now painted up enough infantry to make it a reality. This is more of a test game than anything else really. Can the humans survive without tanks?  Fritz and I played it out, and it was quick enough that we both got a try at the US force. The OOB stayed the same for the Americans but we used slightly different Martian lists. For the first game, I'm playing the Americans.

Scenario: To win, the Martians have to bring two tripods onto any of the buildings beyond the trench line at the end of the game (turn 5). The humans win if this does not occur. Each side receives 900 points. The humans can deploy on 2/3 of the board, the Martians 6" from their edge. 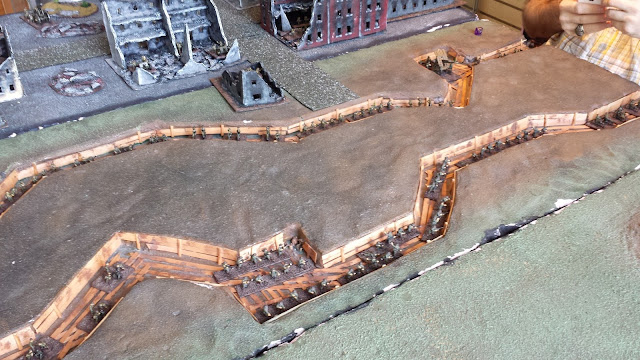 The heavy artillery are at the rear, and damage the dust tripod in the pre-game bombardment, making its weapons malfunction. However, Fritz deployed his forces heavily on his right, meaning after about 2 turns I might not have line of sight on much of the Martian force with the big howitzers. 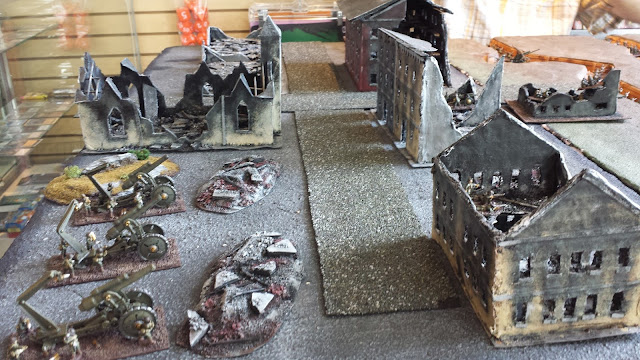 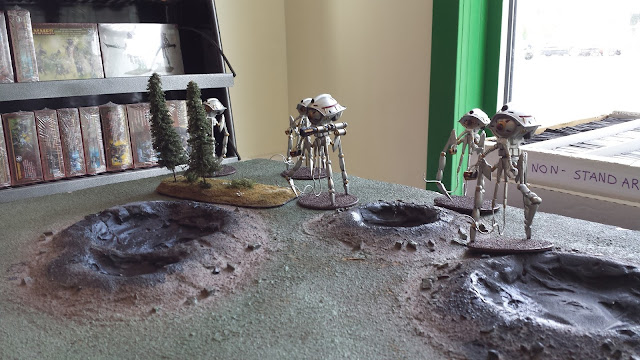 Fritz goes aggressive, and burns all three of his Orders to move several tripods up quickly, giving him a lot of shots into the trenches. 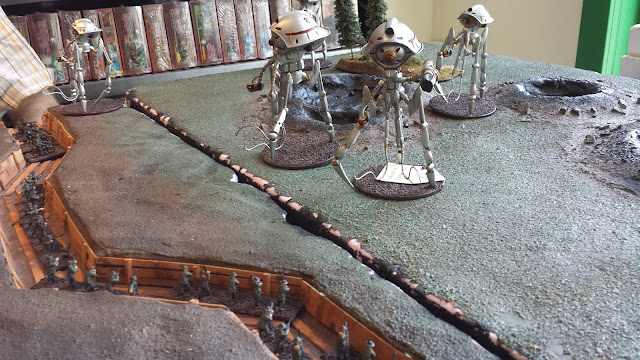 Two infantry units are destroyed by black dust and heat rays, as well as the AT gun. 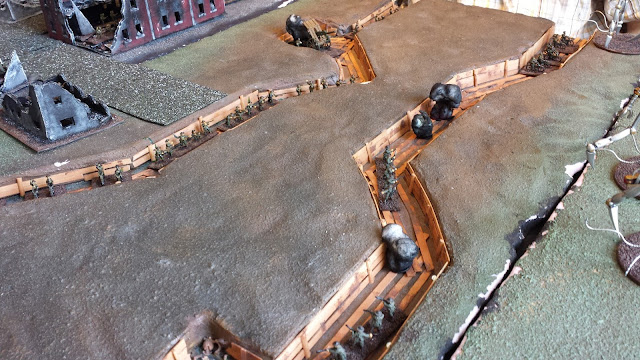 The human counter attack was terrible. Rough Riders (near impossible to hit in a trench) immobilize two assault tripods and artillery machine gun and rifle fire explodes them both.   The rough riders were all lost, but it was completely worth it to take out both of his assault tripods, especially the one with dust. 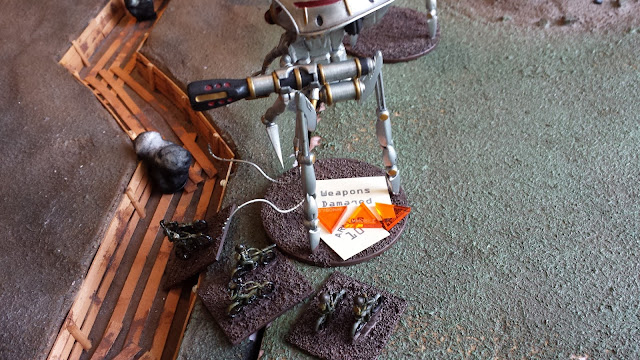 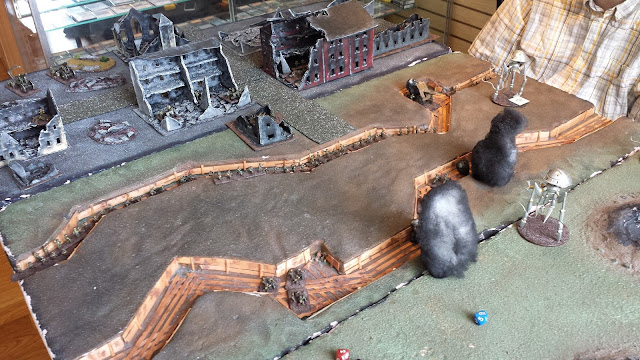 The humans win initiative the next round and begin to fall back. My strategy was entirely defense in depth. Part of my force hasn't even fired yet, as it is hiding in the buildings. As the Martians hit the second trench line the surviving scouts will find themselves in range of everything. The front line falls back to the second, and the second makes room by falling back into the ruins. Everyone fires as they withdraw. 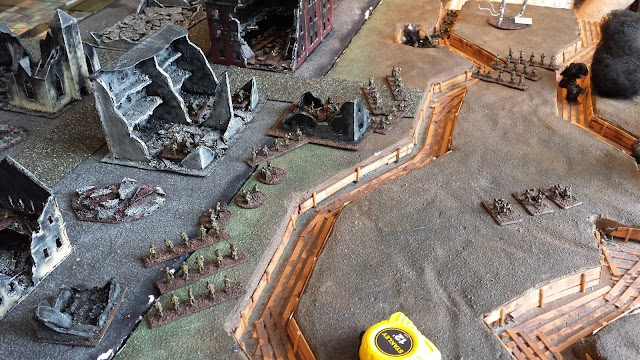 ...Taking out two more tripods. The withdraw was unnecessary. Once Fritz's force is reduced to one, he capitulates, knowing the objectives are now impossible to achieve.  Victory for the Americans in 2 rounds! 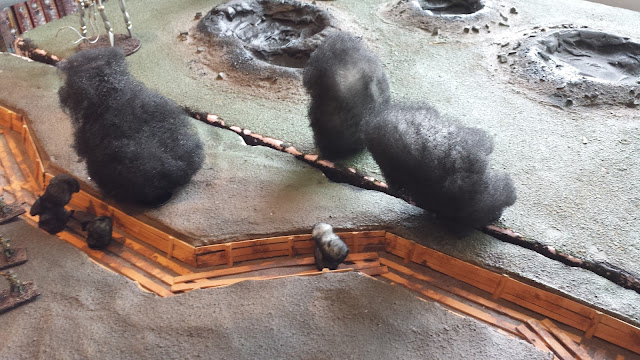 It's Fritz's turn as the infantry company.  Same forces for the Americans, but this time the heavy artillery were deployed separately in gun placements within the trench system. Fritz freely acknowledged that the move flew in the face of tactical tradition, but he saw how hard it was for him to penetrate the front trench and he thought the risk to the guns worth it in order to keep a full field of fire. I hadn't been able my big guns at his tripods in the corner due to the buildings blocking line of sight. 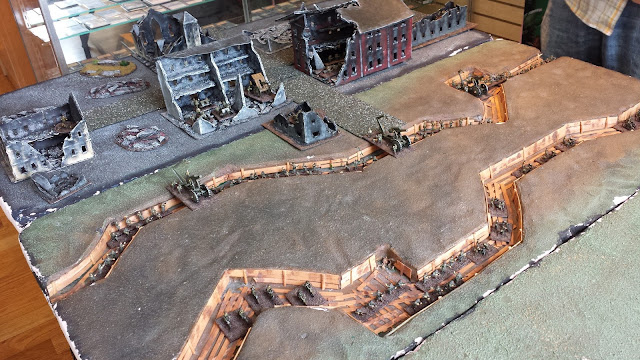 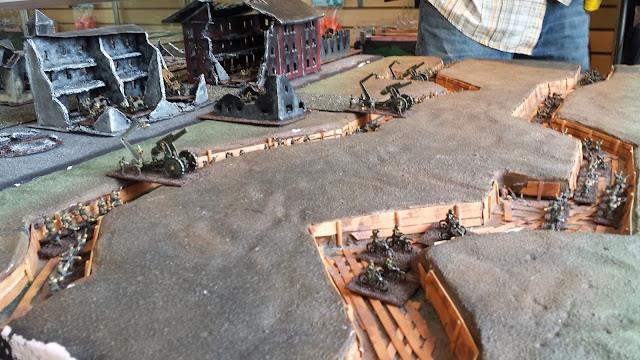 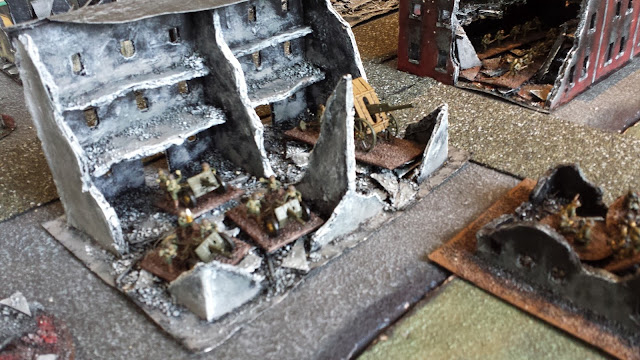 We both agreed that the Martians needed more points due to the beneficial terrain and trenches, but I wanted to keep it fair.  I took the same 900 points but selected a different list.  Part of me still wanted to think that the last game was an utter fluke. It seemed like it should be possible for the Martians to win. Yes, Black Dust was the key to winning this one, I reasoned. The trenches made the rough riders near impossible to hit without that dust. Yes, black dust would win it! I took two assault tripods with black dust, and two scouts for quick movement and to target for the black-dust throwing grenadier. Prepare to choke on dust, you soft-lunged humans humans! 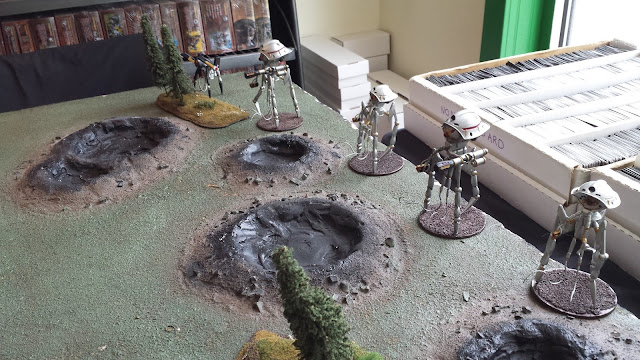 After seeing what happened to Fritz, I played it cautious. Keeping just out of twenty inches (the maximum range a rough rider can dart out of a trench and immobilize a tripod, with an order), I fired shots from the grenadier and the long range assault tripods, and decimated the rough riders hiding in the trenches with black dust. Decimated, but not destroyed. One had two elements remaining, and the other just one. But, the insane bastards that they are, they only rout on a 1.  The human artillery damaged one of the black dust tripods, so I sent him forward to soak up enemy fire as cover for my main strikes from the other units. Further, his weapons systems had taken a hit so I made sure to keep him ahead of the others, to prevent it accidently shooting one of my own. A mortar team routed under heat ray fire and the damaged tripod rushes up to finish them off, getting a bit too close to the trench for my comfort. 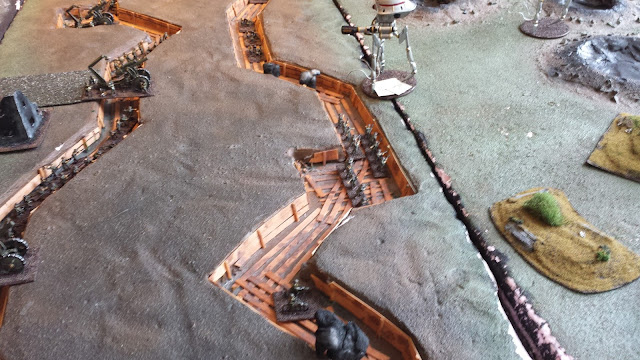 The rough riders immediately immobilize him, making him an easy target for artillery and machine gun fire. It explodes after several hits, taking the rough riders with it. However, the other unit of bikes, the larger one, managed to also tie up one of my scouts. 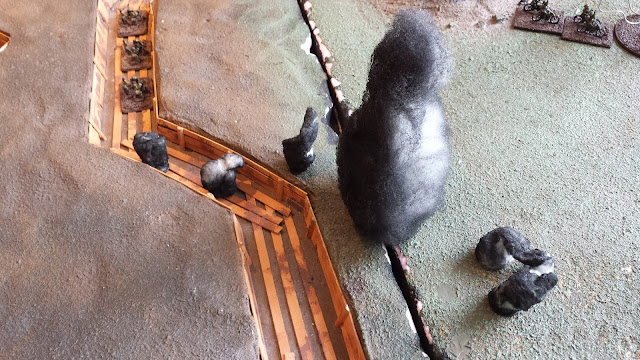 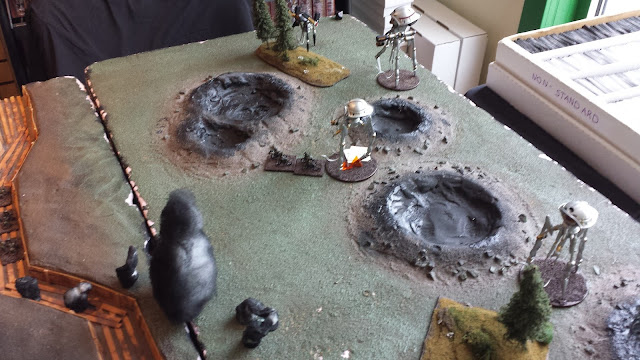 The artillery finished the one scout off, and the other managed to blow itself up trying to break free of the motorcycles' tow cables. 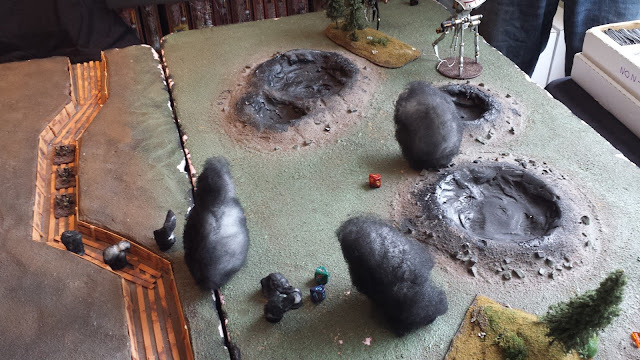 With that, the Martians capitulate, knowing that the grenadier would never make it to the objectives.  The game lasted 3 rounds, and it wasn't even close.

So, the answer to the question, "is an infantry army in AQMF plausible?"

Abso-fucking-lutely.
Posted by Unknown at 12:00 PM