I was excited to receive some pictures from Bill (of AQMF forum fame) and a write up of his play-through of the Battle at the Crossroads 4-player Scenario out in Indianapolis. It's great to see other people playing these scenarios, and I'm always happy to post pictures here.  Here's Bill's report on the action in this four player game. 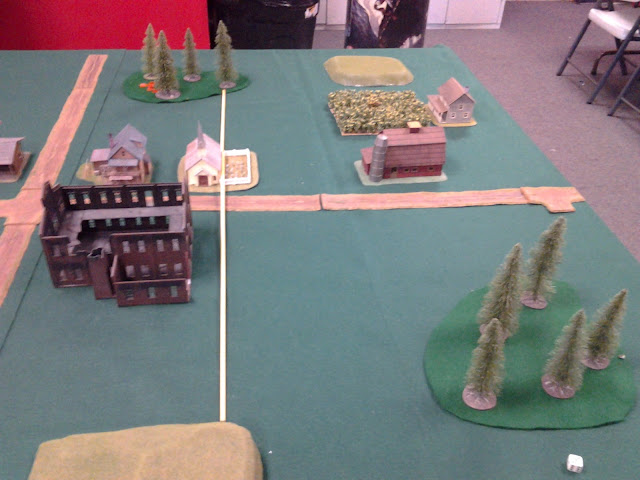 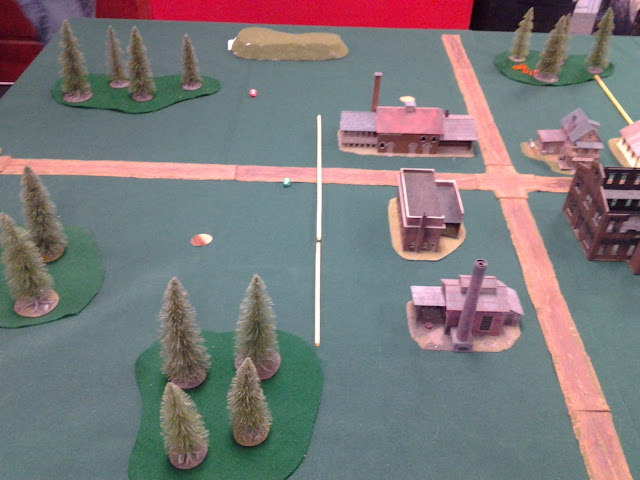 "Here is our battle report of the crossroads game we played here in Indianapolis. We had about 2400 points per side and played on an 8 x 6 table. The zones were upper right zone 1, upper middle zone 2, upper left zone 3, lower left zone 4, lower middle zone 5, and lower right zone 6. The humans placed their objectives in the warehouse in zone 5 and in the cornfield in zone 1. The martians placed theirs by the brewery in zone 2 and out in the open in zone 4." 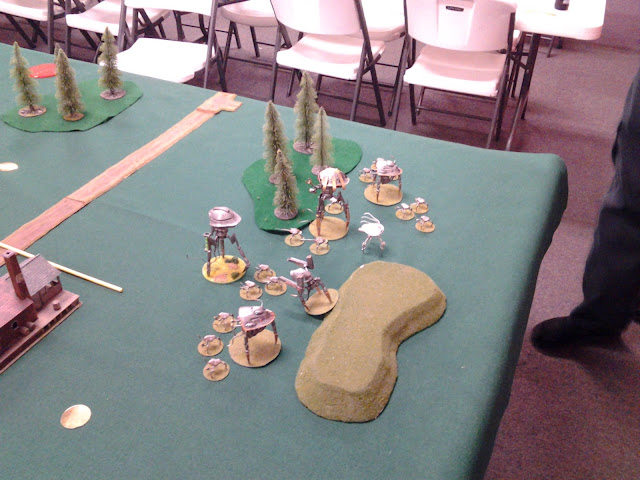 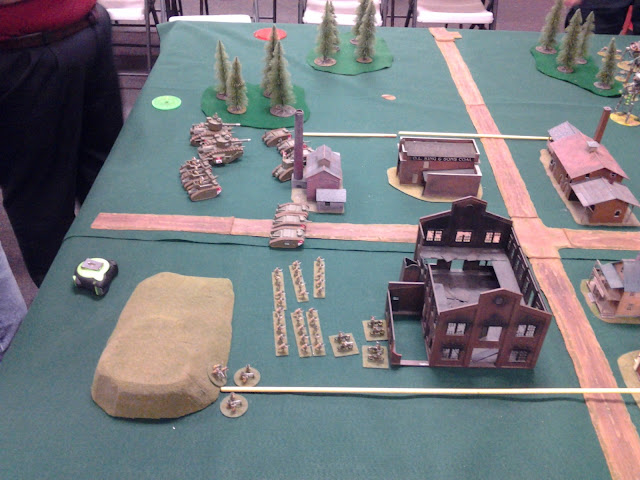 The humans win the initiative on turn two. The rest of their forces arrive in zone 4. Infantry move into the warehouse to control that objective. Human artillery pounds an assault tripod which takes 1 point of damage. The main guns on the monitors fire, but miss.
The rest of the martians come on in zone 3. The martians continue to move forward and spread out. Fire from a grenadier tripod kills an infantry command stand and heat rays kill 2 tanks." 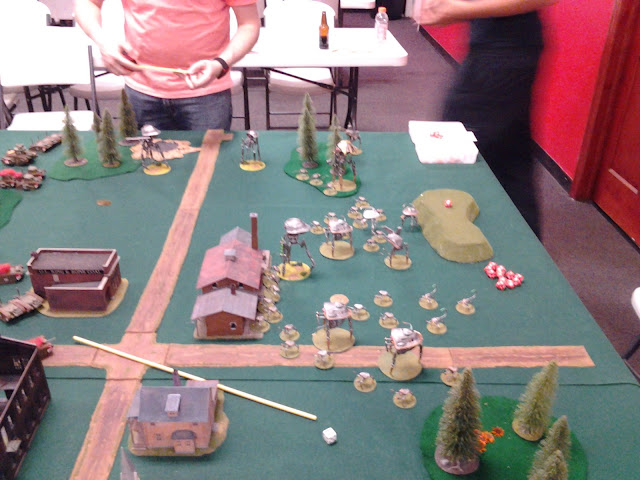 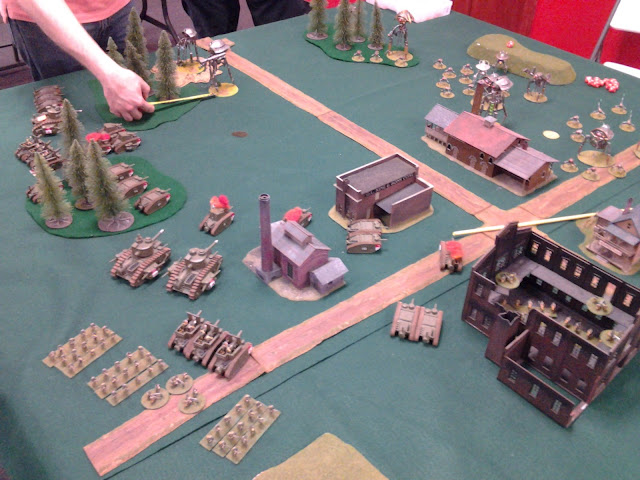 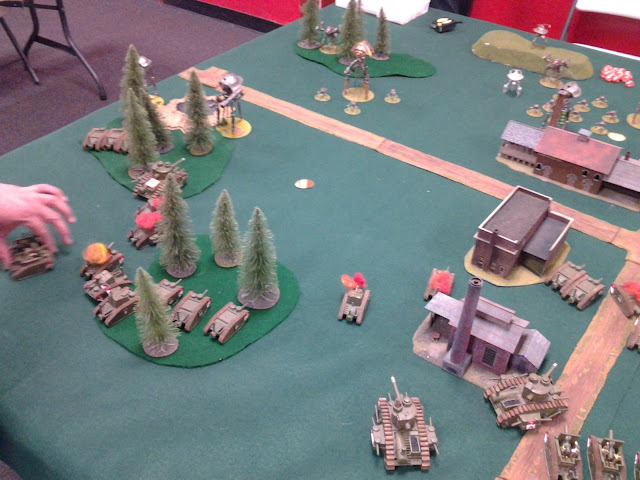 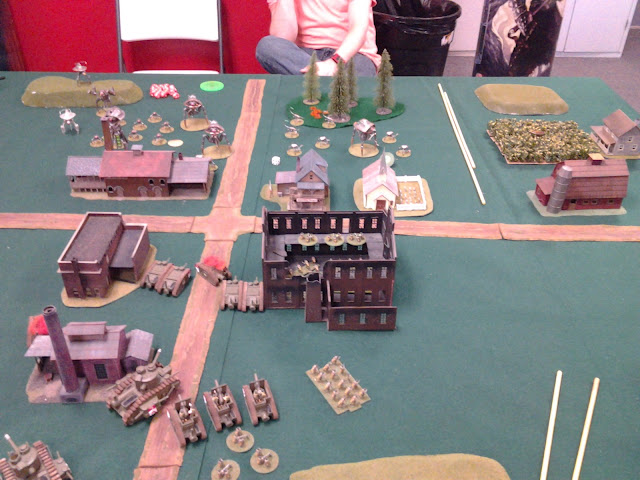 "The martians go first on turn 3. A horde of drones and slavers move on the town.
They take control of the objective by the brewery. Martian fire kills 3 more tanks.
The humans move up. More infantry heads for the town. Human artillery misses, but the tanks pound a black dust tripod and an assault tripod. The BD tripod ignores the fire. The assault tripod is damaged several times and explodes.

Martians go first again on turn 4. A slaver and drones head for the objective in the cornfield. The rest close up. Martian fire kills an artillery piece, 2 tanks, and an infantry stand.
More human infantry reaches the town. The tanks let fly but only cause 2 damage to the scout. Human artillery misses again." 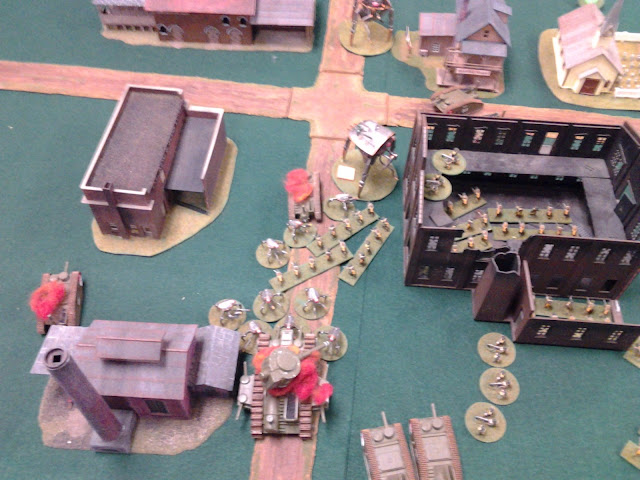 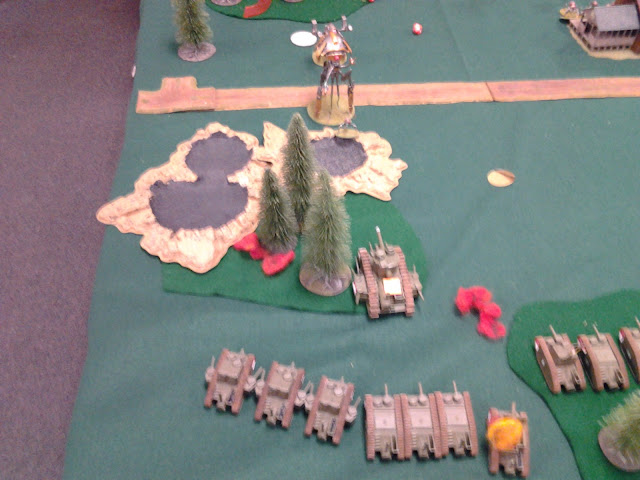 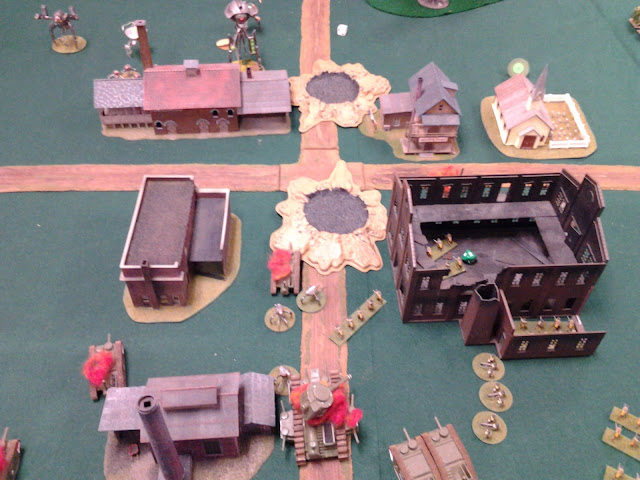 "The martians go first again. The slaver and drones close in on the cornfield. Marvin and his snipers advance on the objective in zone 4. Other tripods come with him. A slaver and 3 units of drones rush the coal factory, The scout sweeps a unit of mk 2's , killing 2. The martians concentrate the rest of their fire on the mk 4's but only take out the left sponsons of one of them.
The mk 3's return under industrial might.
The mk 2's in town hammer the slaver and do 7 points of damage. The hmgs shoot at drones, but do nothing. The artillery misses again and so do the mk 4's. The scout is hit again and blows up." 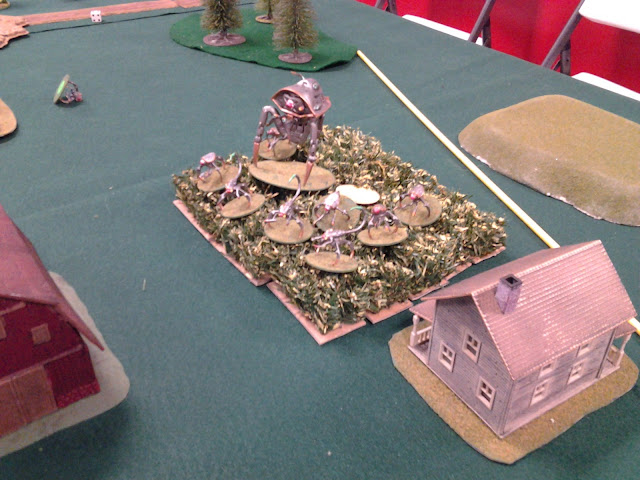 "It is now turn 6. The humans hold the objective in the warehouse. The martians hold the one by the brewery and the one in the cornfield. The other is contested. The martians go first again. The cornfield is now a sea of drones. More drones swarm out of the coal factory and assault a mk 4 and mk 2's. The mk 4 and one mk 2 are ripped apart.
The slaver kills an hmg stand.
The rough riders abandoned the idea of going to the cornfield and headed for the church. Infantry comes out of the warehouse to attack the drones. The hmgs shoot the slaver and it blows up to a chorus of " oh no, oops, oh my god ".
A total of 5 drones, 2 tanks, and 10 infantry stands are in the blast zone. 1 tank, 3 drones, and 7 infantry stands go away. The BD tripod is hit and explodes. The artillery finally hits a slaver and it blows up too. What a turn of events.

Turns 7 & 8 are mostly anticlimactic. Other than trading fire only the rough riders cause any activity. The humans lose most of their artillery and more tanks. The martians take a bit more damage. The rough riders zoom out and grab a destroyed drone. Before they can get away, the martians use their last orders to catch them with scorpion drones and regular drones. Poor rough riders. 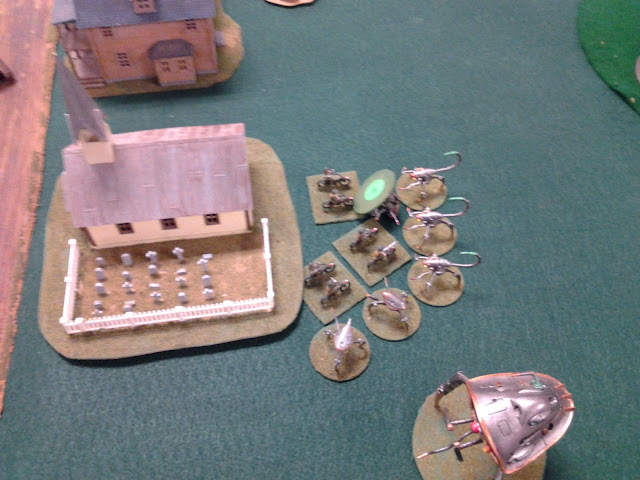 "We have house ruled the MK 4 tanks. They are just too big to be killed by one hit all the time. We allow them to be damaged twice before they are destroyed. On the first damage result we roll a die:

This gives them a little more staying power, but there is still that chance it could make a big boom on the first hit.
Give it a try and see what you think."

2410 points for the Martians

Email ThisBlogThis!Share to TwitterShare to FacebookShare to Pinterest
Labels: AQMF, Letters from the Front