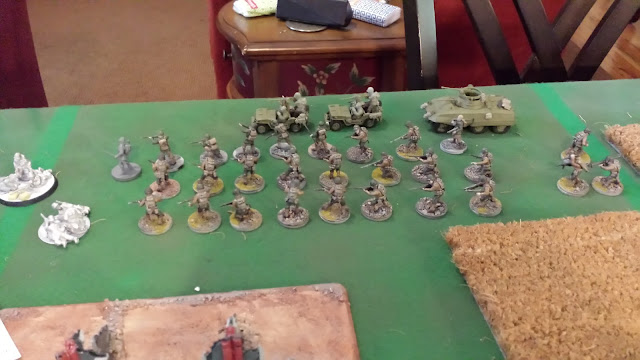 Nate returned to my place for a second attempt at a game of Bolt Action, the 28mm WWII game from Warlord Miniatures. The first one ended rather inconclusively, due to time restraints. We didn't have a lot of time today either, but we made a good go of it, although we were slowed down by me still learning the rules. Above are Nate's American forces - nothing to scoff at. Once again, I played Germany, and with the way the lists work, I had significantly fewer forces (the Americans had an extra MMG, an extra rifle section, a bazooka, and two jeeps and an armored car), but my forces had better quality and weaponry, with two of my three rifle sections rated veteran and plenty of AT weapons and assault rifles. The unpainted blobs in both pictures are MGs. 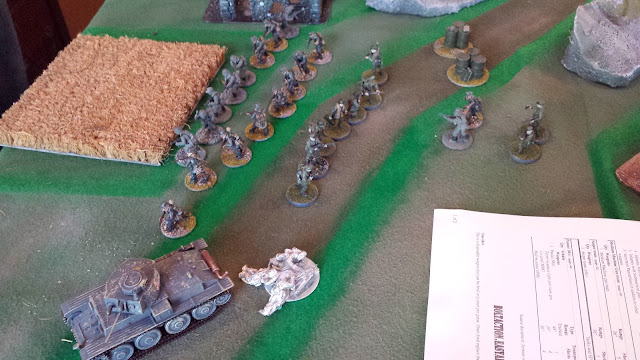 The Germans deployed into cover. The tank, MGs, officer, and a unit of regulars was held in reserve. 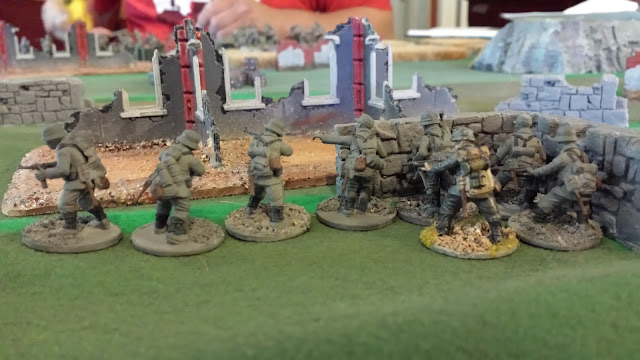 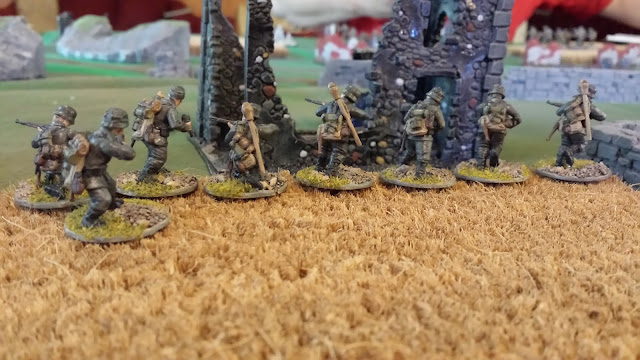 My sniper team took up positions on the second floor of this building for better line of sight. 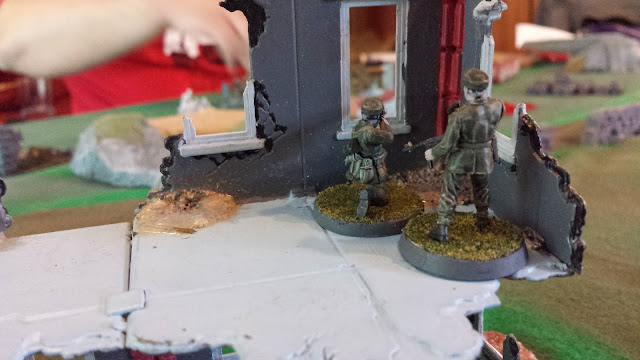 As my units activated, I advanced them into more forward (and better) cover, taking the odd shot at the American infantry across the road. 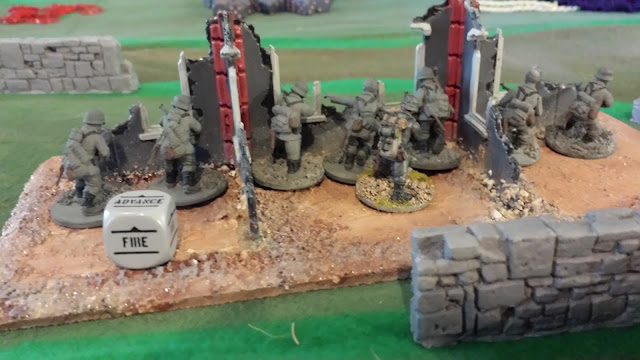 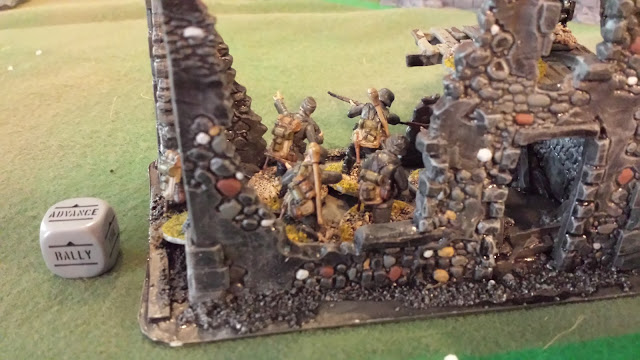 On the second turn, I brought up my Panzer, advancing and using the MGs against Nate's infantry. 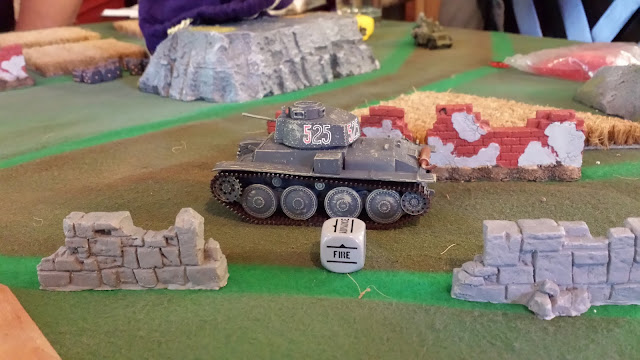 I moved up one of my veteran rifle squads, before my regulars came on the board and occupied the position the vets had just vacated. 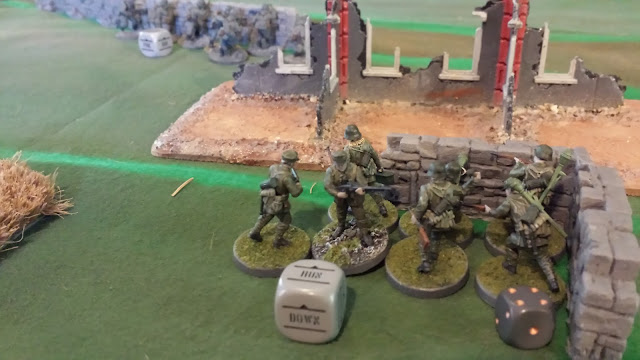 Meanwhile my sniper was coming under heavy fire. Nate brought up his armored car and both of his jeeps (with MGs mounted). No casualties, but they were doing the best they could to keep his head down. I was actually ok with this, as he was wasting a lot of shots on the small team, hard to hit in their excellent terrain.  The way Bolt Action's dice system works, most of his shots on the sniper needed a 6 and 6 again to actually hit him, at least if the unit moved that turn. I was more than happy to let him waste the shots, even if the sheer volume of dice started accumulating pins on the unit. 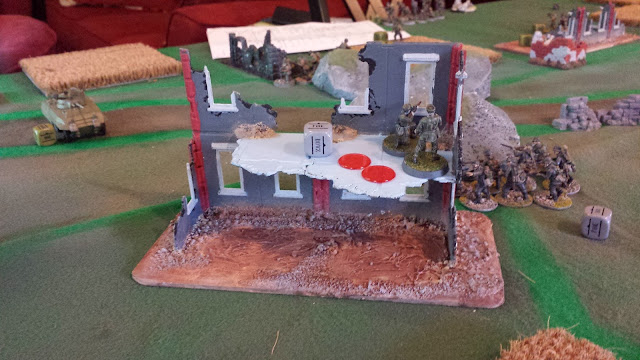 More threatening was the way he was trying to move rifle squads in that direction.  If he could take that building, my objective would be very threatened. On turn 3 my vets rushed up to support. 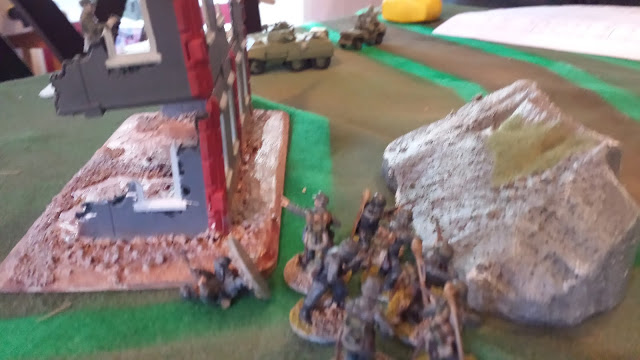 The sniper kept soaking up fire, accumulating 4 pins, rallying to lose 2, and then getting them right back. Finally, American fire killed the sniper's observer, leaving the sniper himself alone in the building. 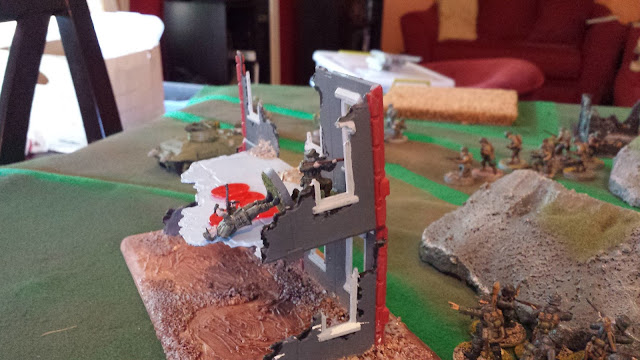 Nate's infantry move into the open, showing his hand. He was throwing everything at this flank. 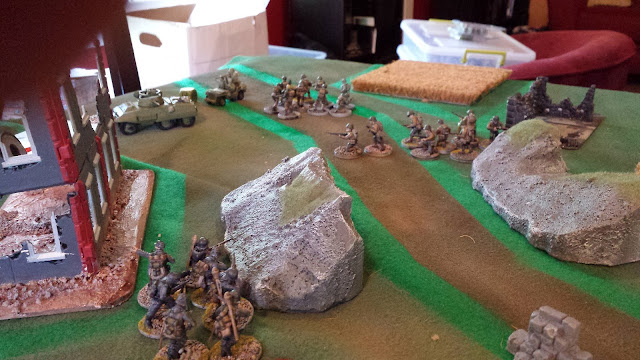 My Panzer wasn't having it. It moved up, and threw fire at the infantry in the open. It was also trying to get out of range of the bazooka team. 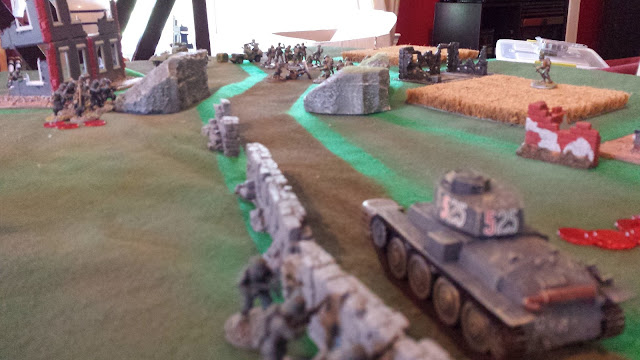 I got my veteran infantry team into the building just in time for it to be assaulted by the troops crossing the road. I also got my officer into the building to support them (and help activate all the pinned troops inside). 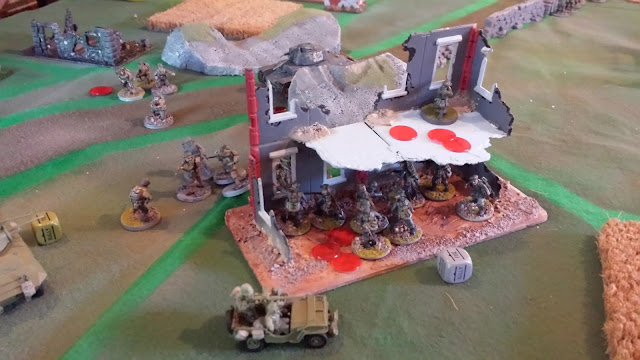 The assault didn't go well for the Americans. I lost a few men, but their whole team got slaughtered trying to climb through the windows. 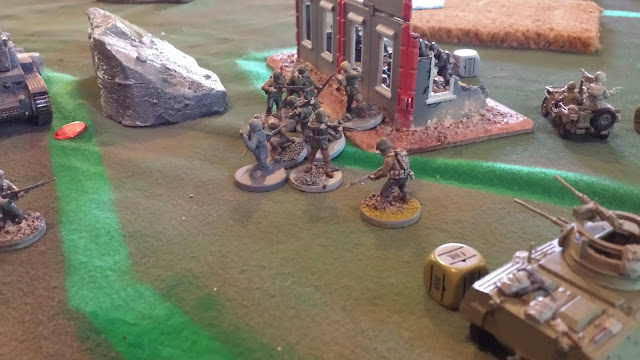 On the other side of the battlefield, rifle fire managed to destroy one of jeeps. Cheers from the German side! 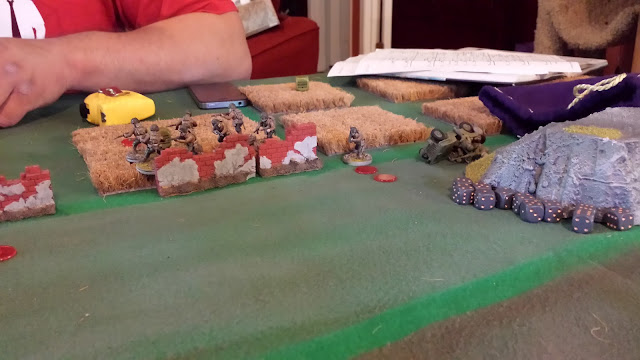 A second American infantry unit which had been a bit chewed up by the Panzer's machine guns, found enough fighting spirit to make an assault and got luckier than their predecessors, clearing out the German infantry squad inside.  Now only the offer and sniper remained in the building. The sniper took a shot but missed.  Hard to shoot when you're pinned down. 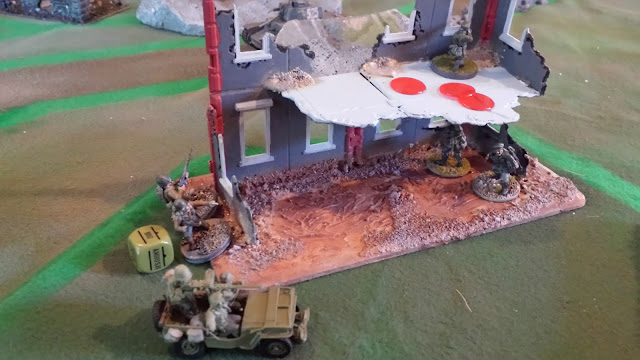 Fire from the jeep which pulled around the rear of the building took out the German commander. Bolt Action doesn't consider a commander's death to be a problem though - a major oversight in the rules I think - but for this game, I'll just be grateful. 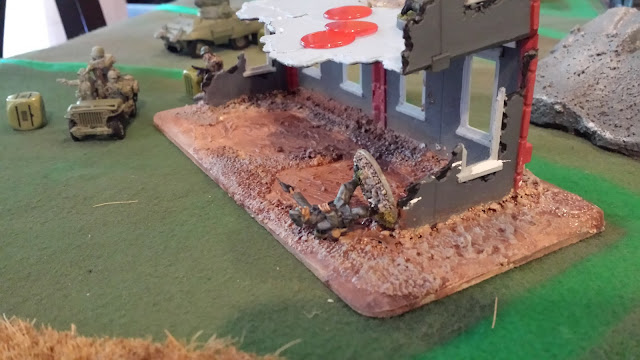 And then... out of time.  We played 4 full turns our of the 6 the scenario called for, but it wasn't quite enough to call a clear winner. We both agreed that the best I was likely to get was a draw, but honestly, I don't think the Americans had a shot to win, as a vehicle can't hold an objective, and Nate had very little infantry left on the flank he'd opened to exploit it. His end position was probably slightly better than mine, but I think a draw was far more likely than a victory.

No game at all.

As for Bolt Action - it's fun, fairly quick (although not quite quick enough apparently!), but I think it's kind of incomplete in terms of WWII gaming. Nate and I are talking about trying a Chain of Command game using his 28mm WWII figures, which I'm guessing is going to suit me better. The ranges in this game in particular just feel arbitrary. It's not that 30" in All Quiet is particularly realistic, but at 18mm it feels more natural somehow than 24" or whatever at 28mm. It seems odd not to be able to shoot a submachine gun at someone on the other side of the road from your position.
Posted by Unknown at 7:47 PM