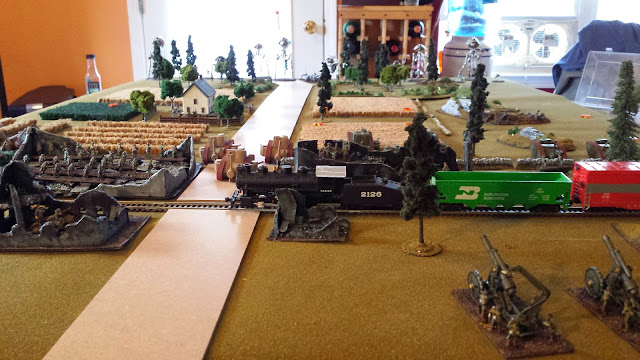 I've met some great people since I started wargaming, but I've also reconnected with people I haven't seen much in the past 15 years or so. One of them is Brian, who was a few years ahead of me back in High School.  I reached out to him when I picked up AQMF because I knew he enjoyed this sort of thing, and after a few games of Dust Tactics at his place, he came over to mine for a few games of All Quiet.

After a small game using only the starter set to acclimate him to the rules I decided to revisit the scenario previously posted as "The Wrong Side of the Tracks" with slightly larger forces and more terrain.  The objective is the same: get two Martian units across the train tracks. The humans are trying to stop them by breaking the Martian force (killing half the units) before they succeed in cutting the rail line.  Martians deployed 8" from their edge, while the humans deploy anywhere on their half of the board, and can deploy up to 3 units as blips.

The board, as it turned out, didn't favor the Martians due to the heavy forest on their side of the board. It gave them some cover on the approach, but slowed down the whole line, except for the forces on the far right and the tripods marching down the road. 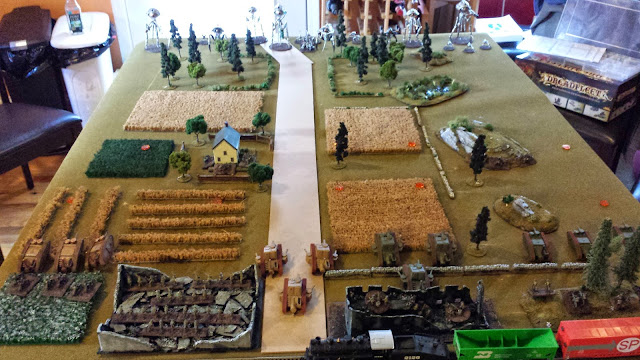 The Martian force was no joke, but it needed to advance under artillery bombardment and fire from tanks ranged to catch them just as they emerge from the forest. 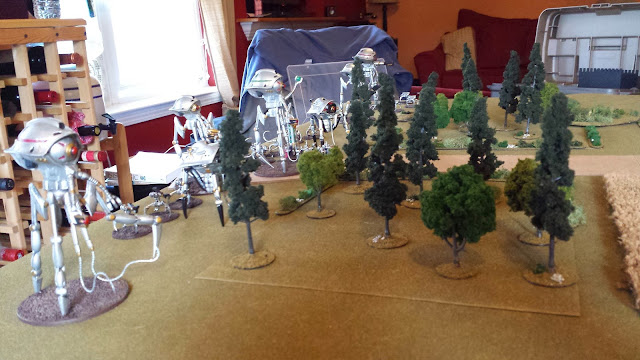 The 29th Division deployed some HMGs and Infantry as blips in the fields, but kept everything else far back. Tanks are deployed ahead of the rail line and the adjoining ruins, where they can move forward, fire and retreat again as needed. 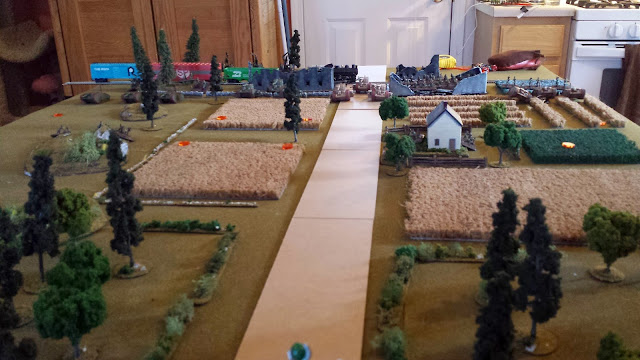 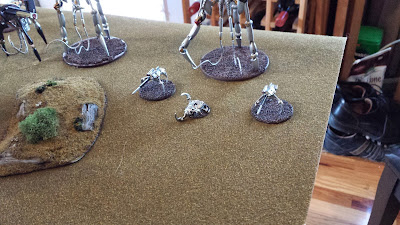 The Heavy Artillery used its pre-game bombardment to target the assault tripod on the far right and its attendant sniper drones. This was less because of my natural fear of those things, but also because there was a naturally clear avenue to advance on the right with minimal terrain.   That avenue, combined with the road at center, were the fastest way to get to the tracks, so I covered them with the big guns and MKIIIs.
As they advanced, they came into the Americans' field of fire. 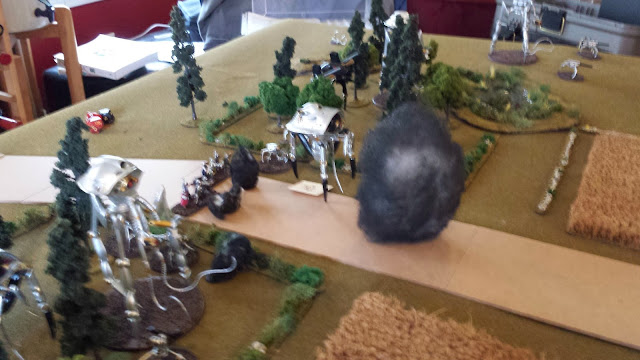 The Americans held most of their units in reserve to prevent a breakthrough. I'd hoped to whittle down the Martians long before they got near the tracks. 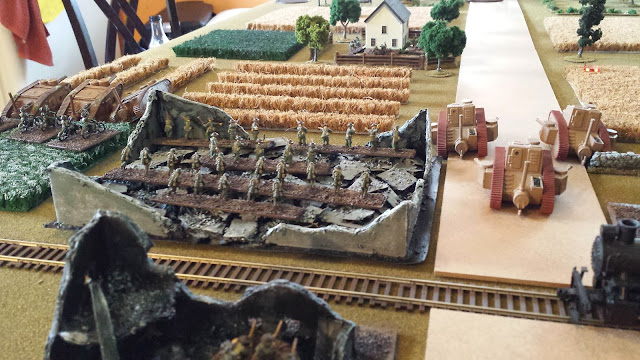 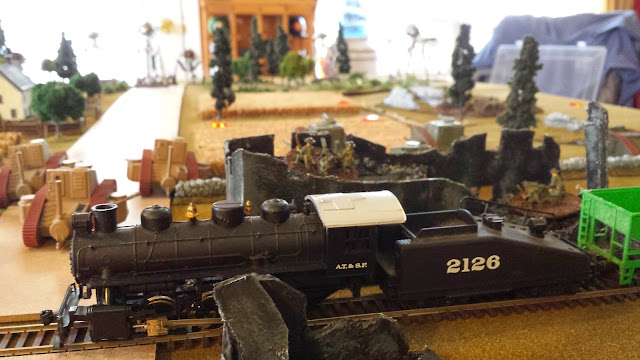 The dense terrain slows down the Martian advance, forcing Brian to use his move orders to push units forward. As they advance, the MKIIIs start blowing them apart.  The dice gods were clearly on my side this game.  I think I one-shotted two Tripods this single game. It was a bit ridiculous.  The assault tripod on the right goes down, stranding the remaining Sniper drone. 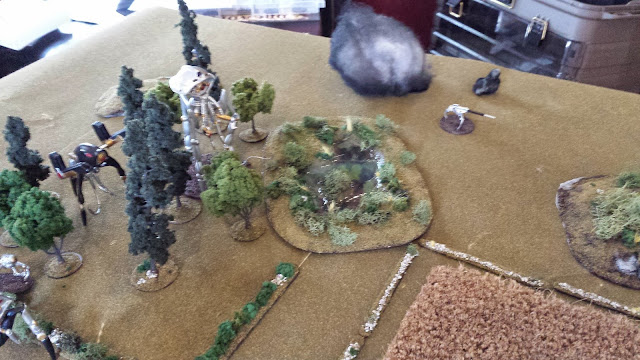 The scout marching down center explodes, damaging other nearby units. 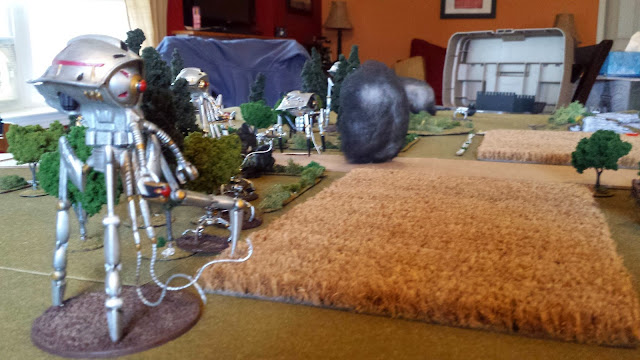 Rough riders getting into position: 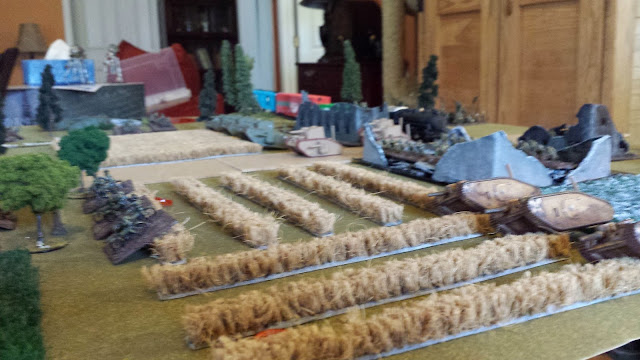 At this point, Brian gives up on the right, and concentrates his advance on the center and left, where an undamaged assault tripod is striding towards some MKIIs in a cotton field just in front of the train tracks. 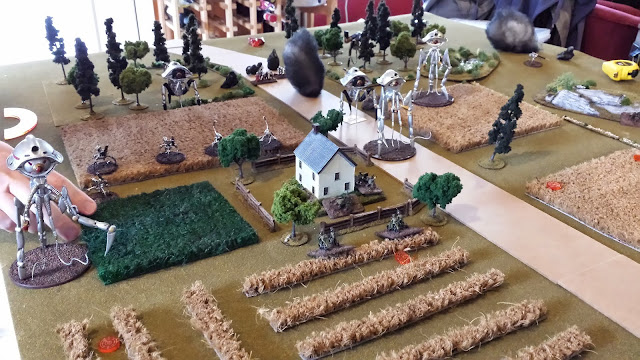 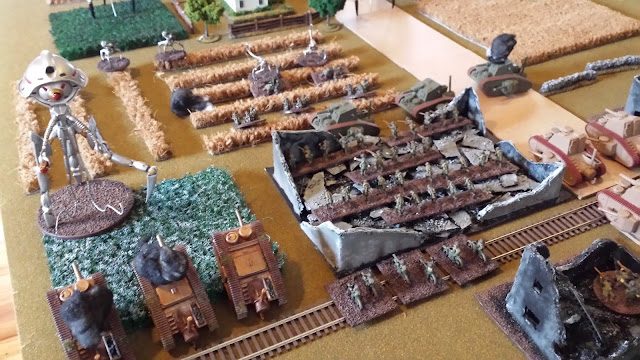 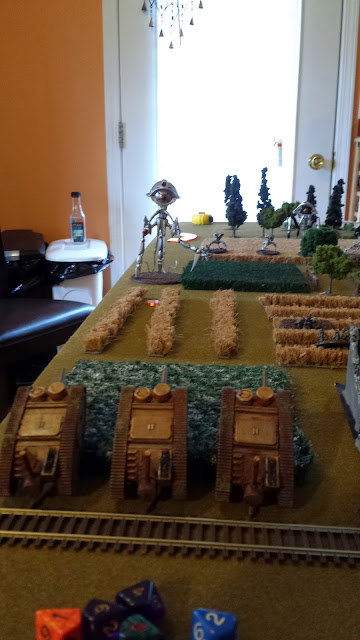 The tripod destroys two of the three MKII elements, clearing the way for an advance, but Brian doesn't get the chance. On the final human turn, the American armor gathered on the right flank turn towards the center and destroy another tripod and some drones, breaking the Martian forces for an American victory! The slaver, escorted at the end by only a few remaining drones, was down to 1 armor at the end, something rarely seen. 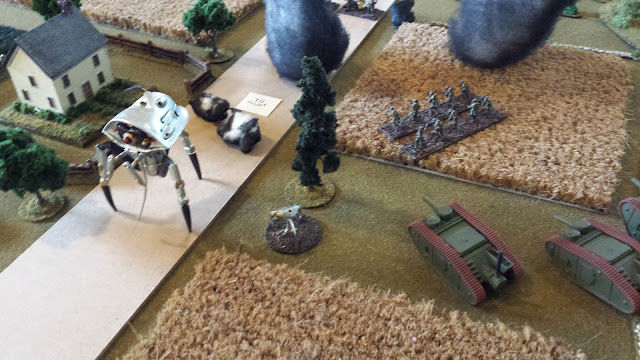 A good first game, and Brian seemed to have a blast. We had time for one more game, so keep your eyes out for the next report.

Also, reviewing the scenario, it's clear that the Martians need about 25% more points than the Americans due to the long slog they need to make through enemy fire.  This is mostly due to the amount of terrain I like to use, so it could probably be closer to even forces if the board was more open to Martian movement.